Situated in a period building in Barcelona’s Eixample district, the recently opened four-star Hotel Vincci Gala pays tribute to the genius of the Spanish artist Salvador Dalí. The design of the new Hotel Vincci Gala is marked by two requirements. Firstly, the obligation of the Monument Protection Department of Barcelona to conserve both the facade and a large white marble staircase in the inside of the building and secondly, the name of the Hotel: “Gala” referring to the wife and muse of the surrealist painter Salvador Dalí. Gala and Dalí formed an unlikely pair and similarly, the project reconciles multiple contrasts between the old and the new, the discrete the extravagant, the elegant and the informal. 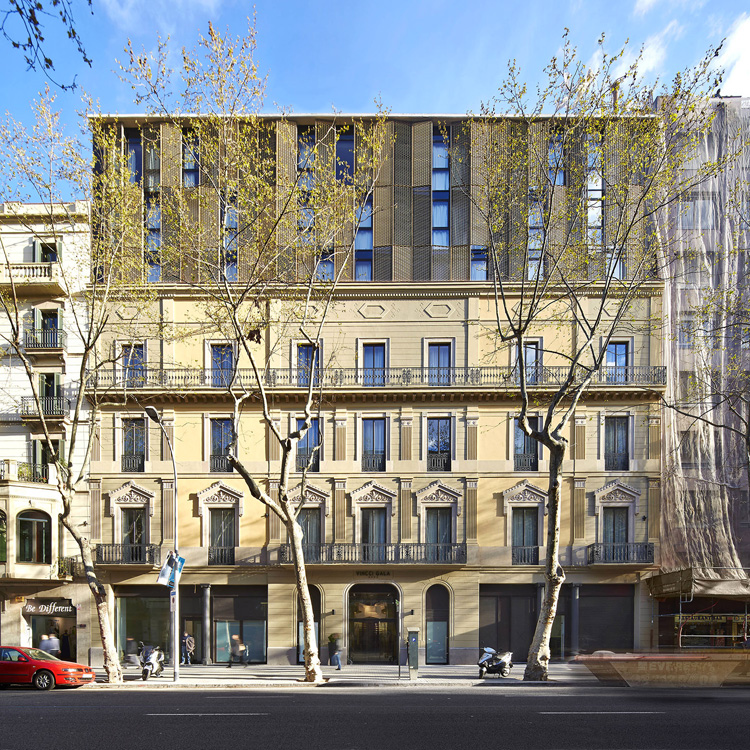 The color gold is the keynote of this hotel that is repeated in different shades and applications, both on the external facade and the interior of the building, combined with organic shapes and contrasts between light and dark. The main material is metal in contrast to the stone and marble of the original architecture. 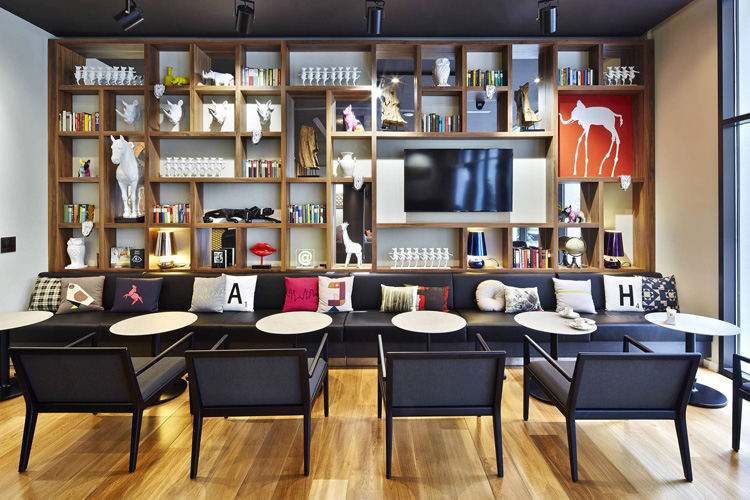 On the ground floor the most common areas of the hotel are located. These are mainly divided into three spaces: the lobby, the lounge area and the bar, each of which has its own personality. The spacious lobby is characterized by the contrast of the large existing white marble staircase with a darker, contemporary and stylish interior designed to restage the staircase and to further emphasize her resplendence. The hotel bar is situated under the central staircase, forming a rectangular box fully encased with anodized gold expanded aluminum panels. A continuous element of black Corian frames the opening of the bar and forms a contrast between its organic shape in deep black and the rectangular gold box. 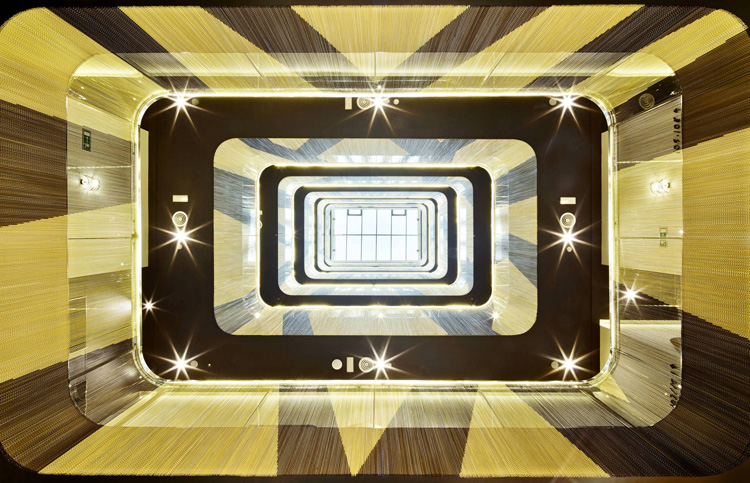 In the transition to the bar, the pavement changes from black marble to light oak flooring to create a warm atmosphere fusing modern with old and elegant with informal. The lounge area is situated beside the central staircase. Wooden covered pillars form a barcode frame a protected and comfortable space with a private atmosphere. The restaurant with the breakfast buffet and two meeting rooms is located in the basement. A flexible system of mobile partition panels enable the space to be divided as necessary, adapting it to the required use. 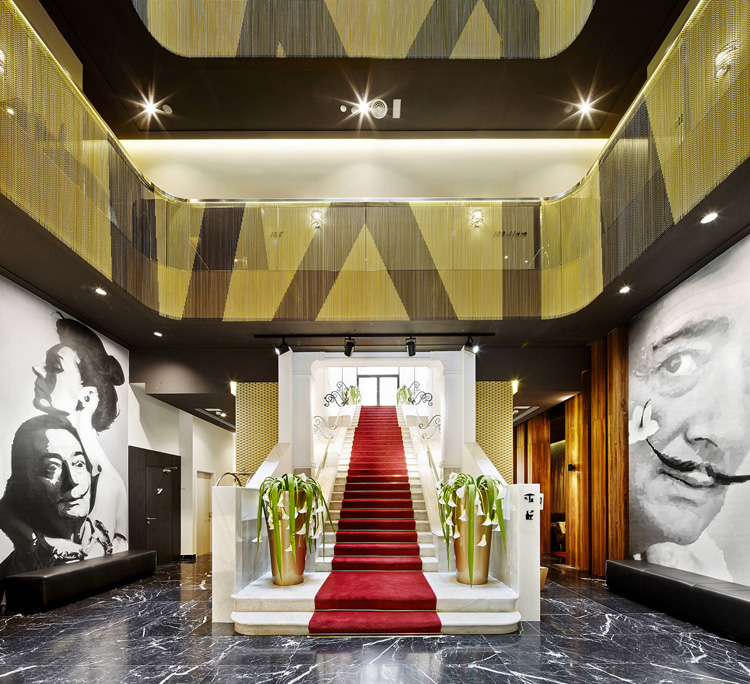 The central atrium is the heart of the hotel and permits natural light to sweep through the building. Golden aluminum chains hang like an enormous veil over the glass balustrades. Dark linear patterns are integrated in order to create a singular optical effect. In addition, strings of LED light have been integrated into the hand rails making the golden curtain shine. The unique geometric design of the curtains has been extended to the doors of the rooms and the patterns on the flooring in the hallways, creating together the sensation of a virtual space, characterized by the superposition of light, transparency, texture and the golden color. 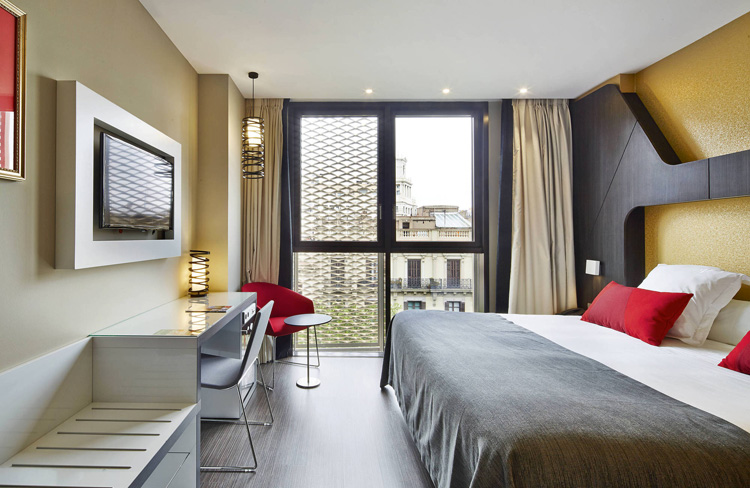 Most rooms follow the same distribution concept. A z-shaped element made of laminated dark anthracite colored wood, integrated headboard, armoire and wall covering. Gold and gray tones in combination with indirect linear lighting give the rooms a warm and elegant atmosphere.

To resolve the problem of different languages of the hotel guests graphic design contains a reduced signage of pictograms designed especially for this hotel, inspired by the handwriting of Salvador Dalí. 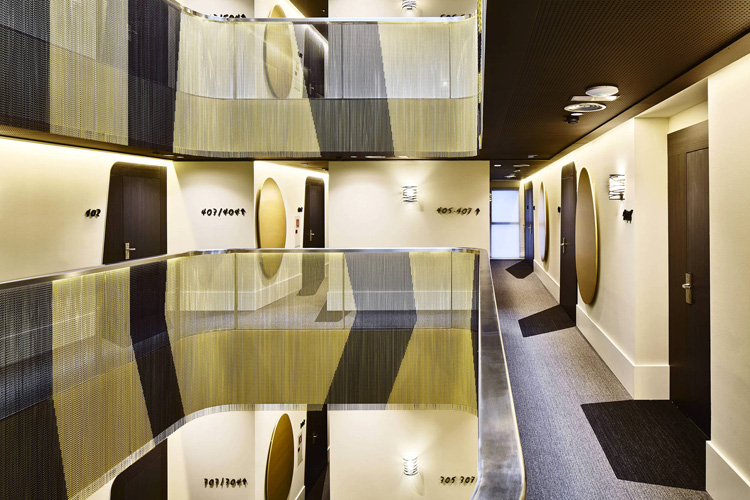 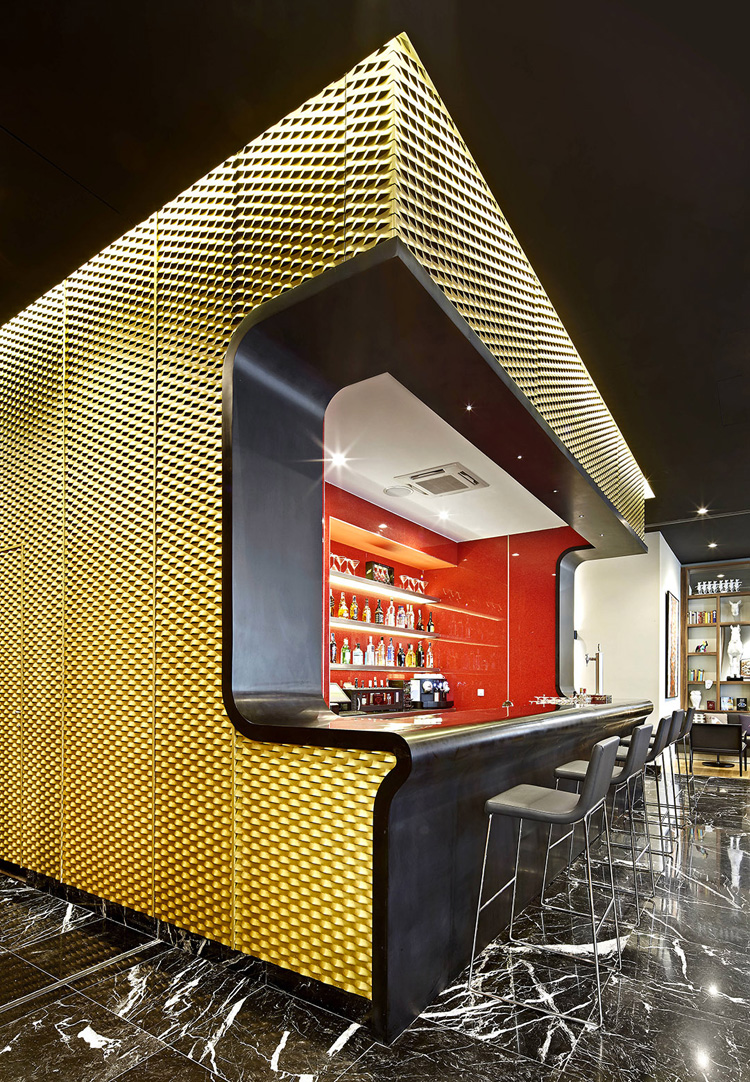 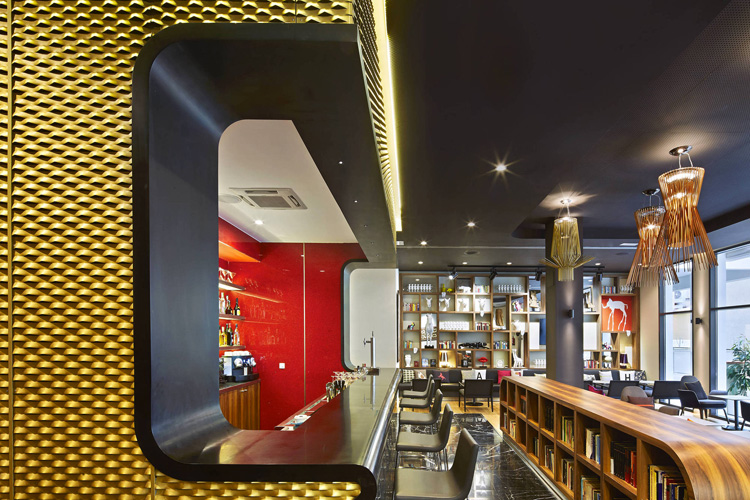 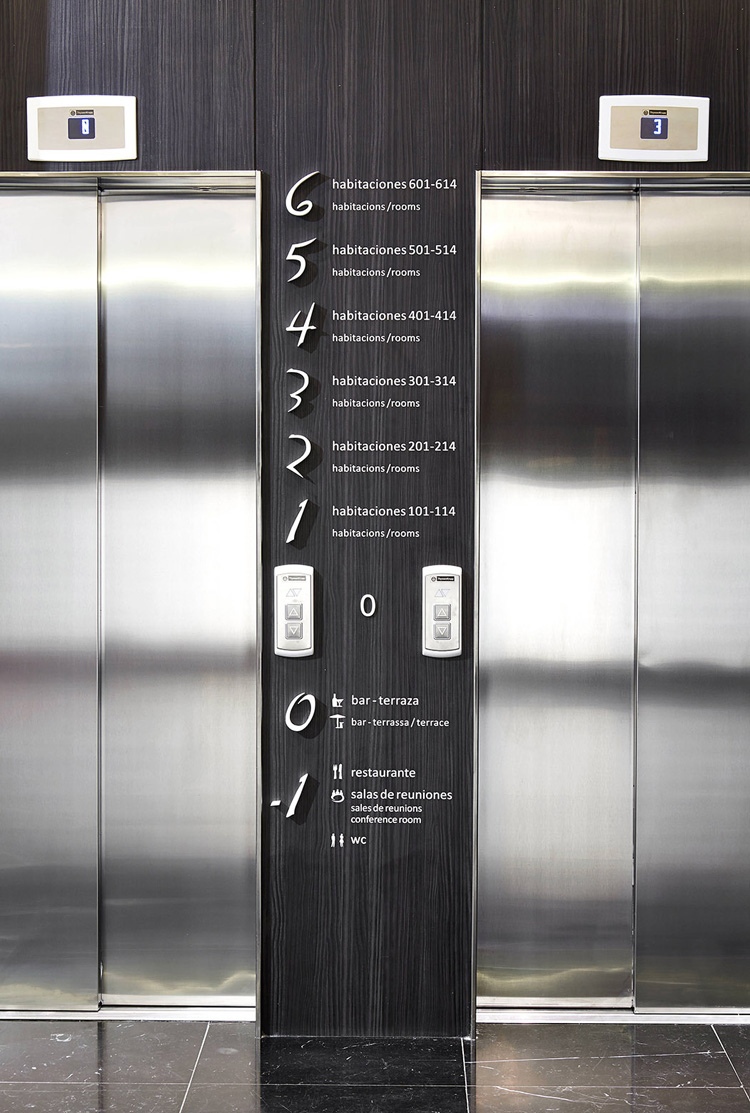 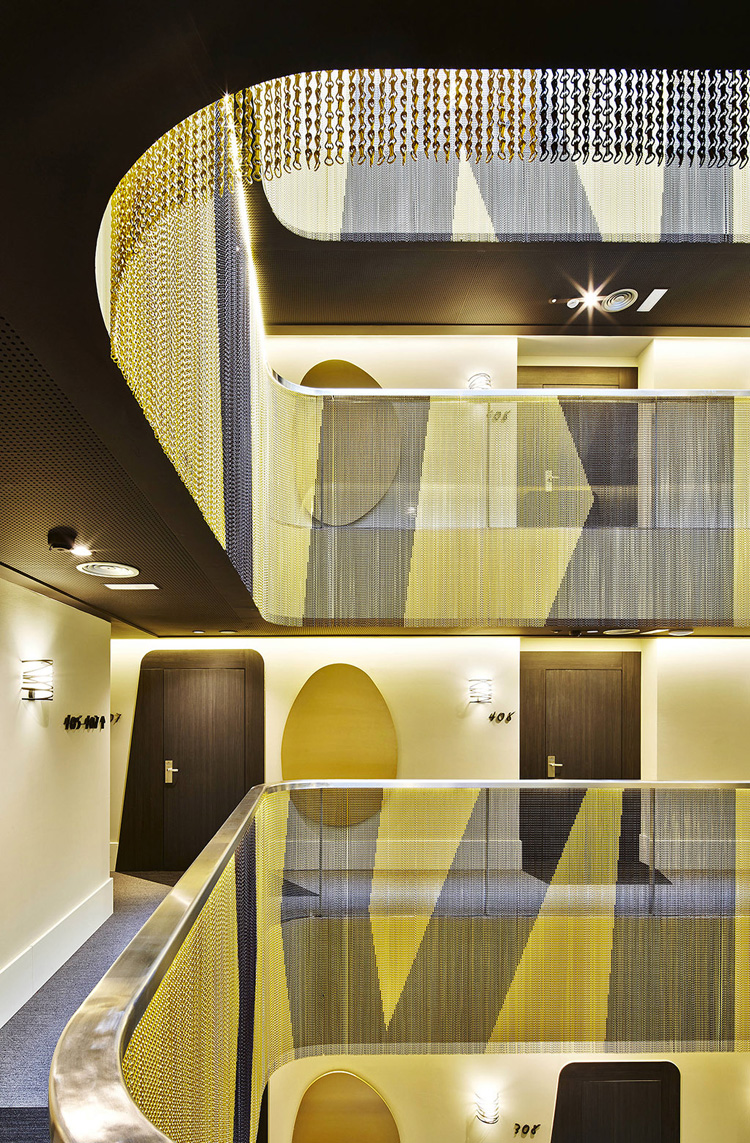 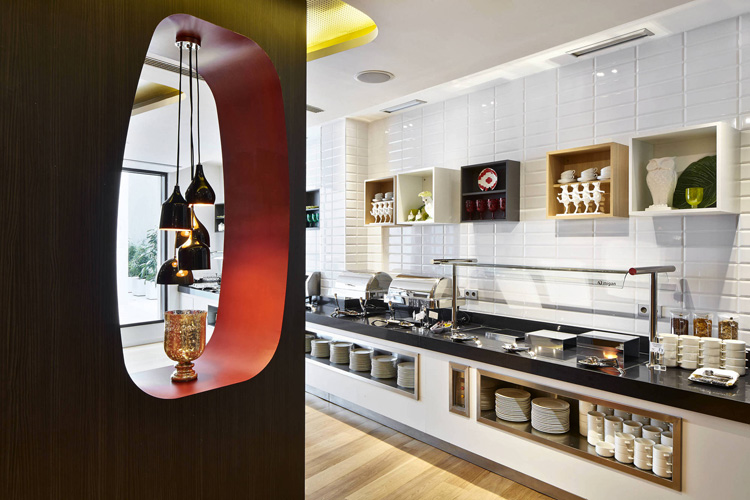 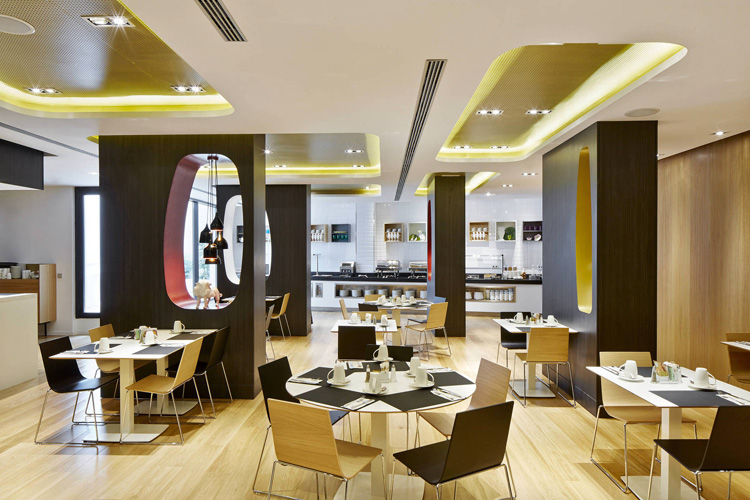 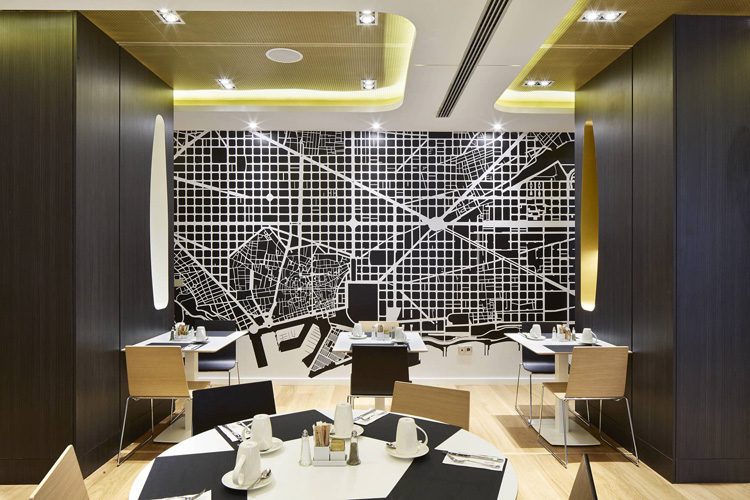 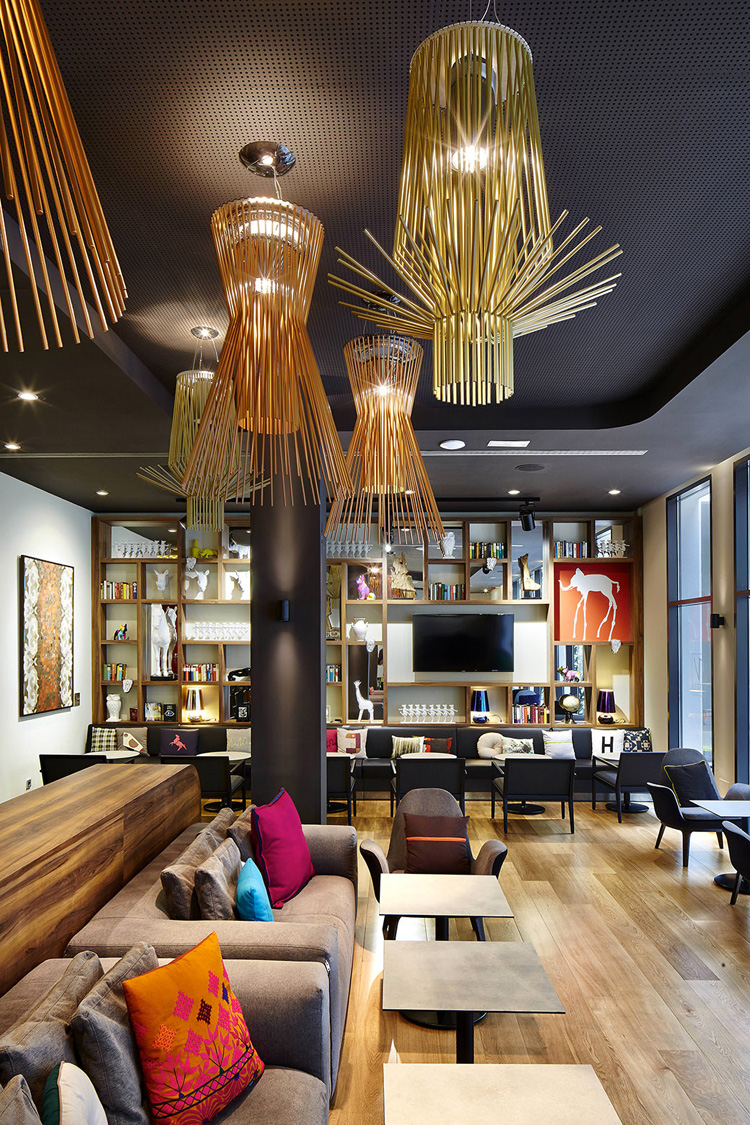 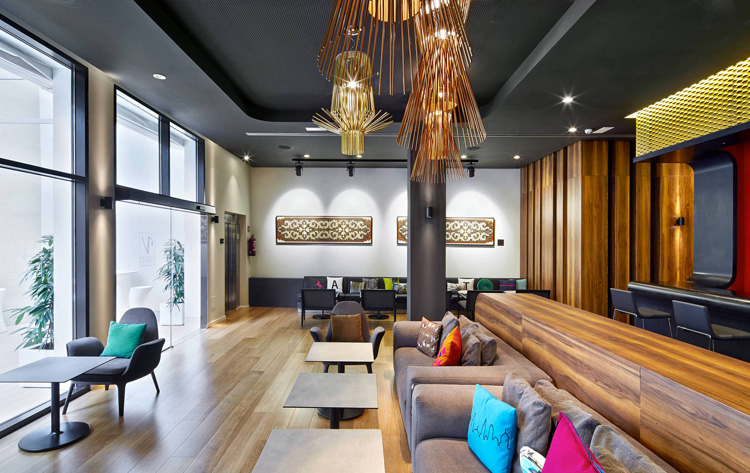 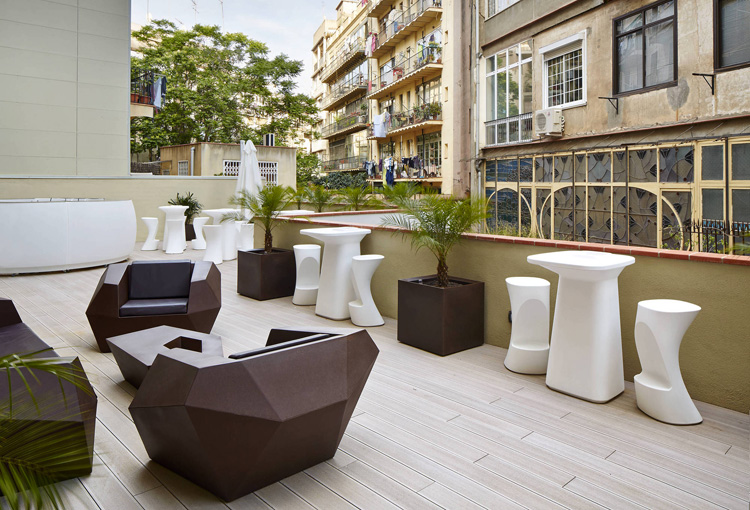 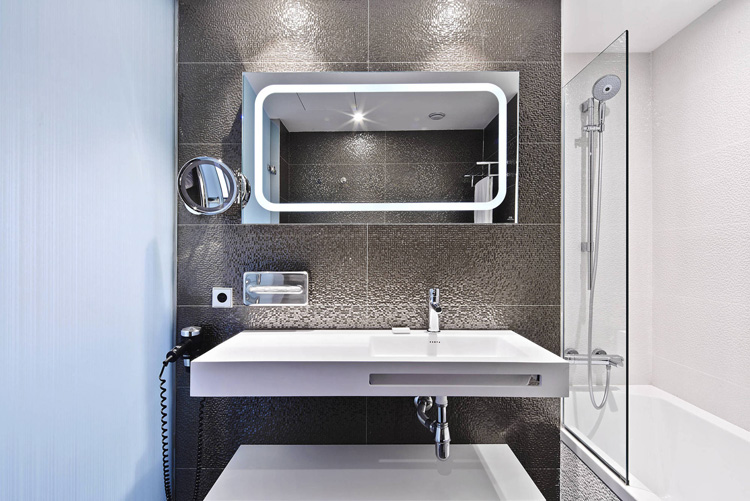 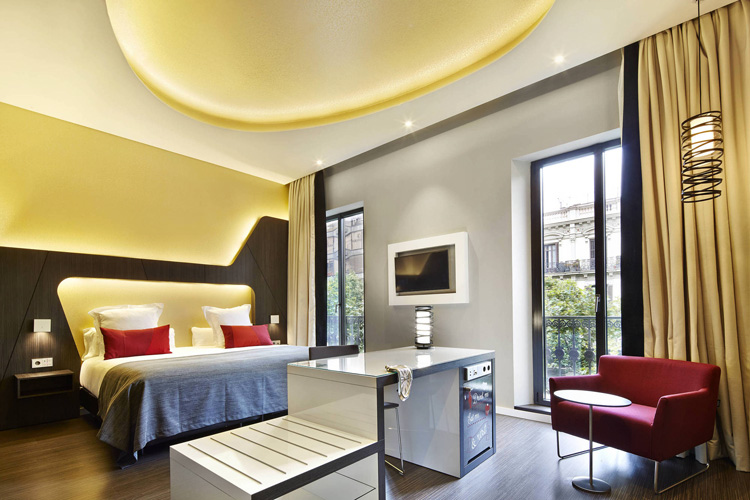 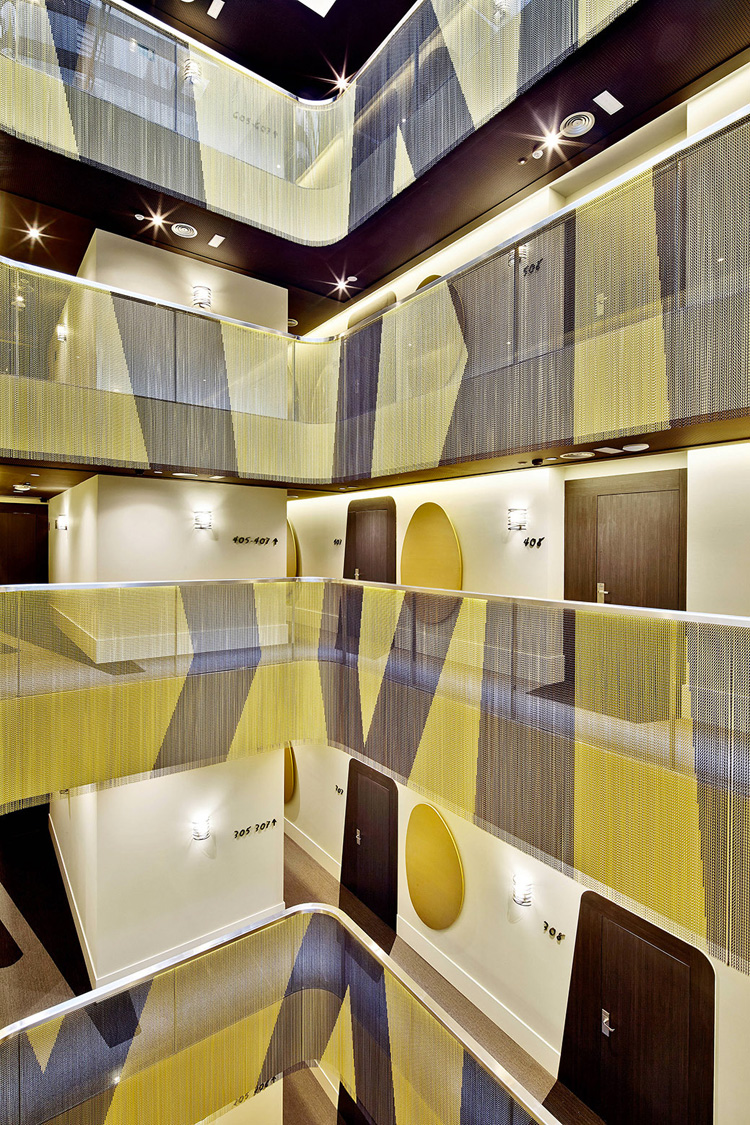