Caritas and AllesWirdGut have developed in Vienna’s Prater district a concept that redefines hospitality, the Magdas Hotel: a house for tourists and for refugees, all under one roof. A hotel with an unconventional concept and an inspiring history that is operated to professional standards – this is how the most recent project of AllesWirdGut Architects initiated by magdas, the social business subsidiary of Caritas Austria, can be described.

The hotel rooms are available to city travelers, tourists in Vienna and overnight trippers, each with a view of the Prater park landscape. Living side by side with the hotel guests are young people who, however, did not travel of their own free will, but are refugees who were left no choice by hunger, war, persecution, and torture in their home countries. 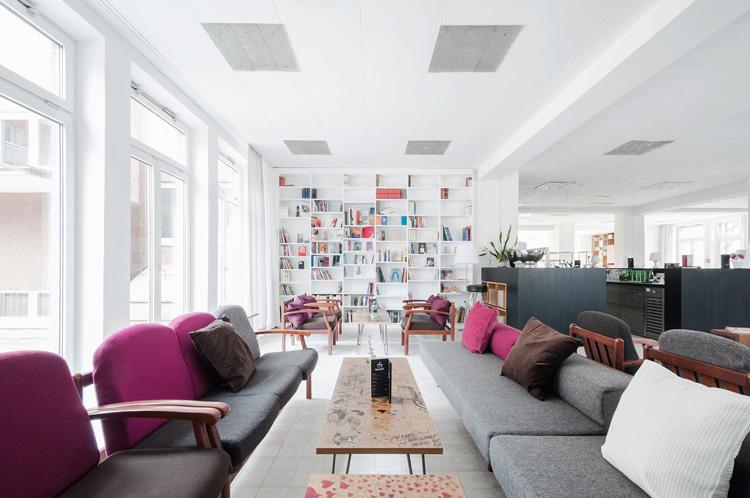 The hotel accommodates two residential units for living communities. Supported by the Caritas, 25 young persons who came to Austria without their parents as refugees have been living here already since November 2014. For them, the hotel is a temporary place to stay, and for some, it is also a workplace.
The core part of what used to be a retirement home dates back to the 1960s. The existing building was largely preserved and merely refurbished, adapted and brought to modern safety standards. Everybody involved was called upon to come up with creative solutions, not only in financing, but also in design. 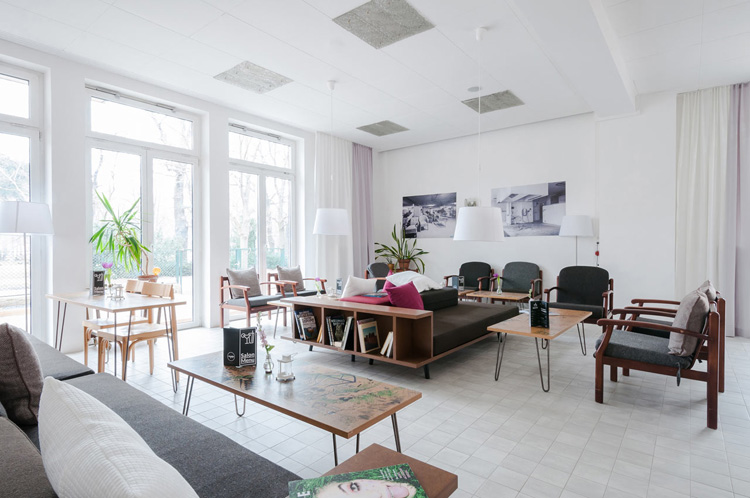 In the design the interior spaces – lobby, restaurant and bar, hotel rooms, and apartments – AllesWirdGut used existing pieces, found objects, and an ingenious mix of elements. The reduced, well-matched and elegant color concept that informs the visible surfaces is accentuated with distinctive individual furnishings, pieces with a past and finds with a history. Caritas’ own carla thrift store was a rich source here, as was furniture left behind by former residents or donated to the project by the local population. 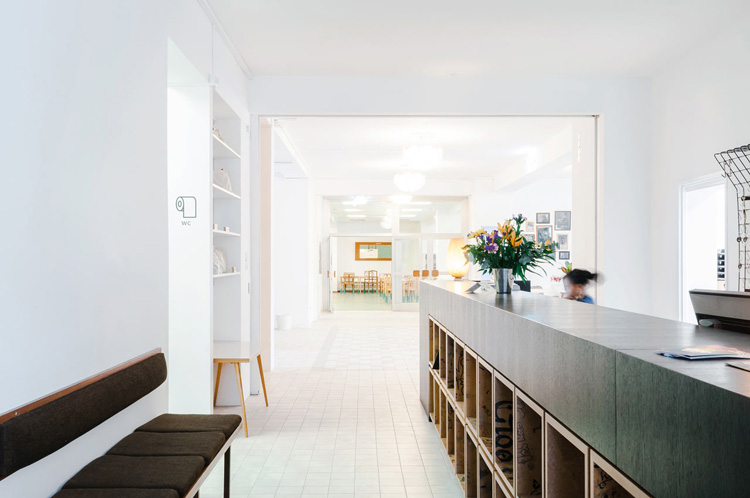 What once had been pretty conservative built-in closets was remodeled under the supervision of Daniel Büchel into tables, nightstands, and wall coat racks. Uneven walls were revamped using the proven technique of pattern roller painting. Work tables with “tags” from students of the St. Pölten New Design University were adapted for the hotel lobby and the restaurant.

In the future, the ground floor will serve several purposes, as an entrance area and lobby for hotel guests, a shared living room for the young people staying in the house, and a bar and restaurant for visitors – a contribution to the integration of “foreigners,” whether they may be guests, customers, or refugees. 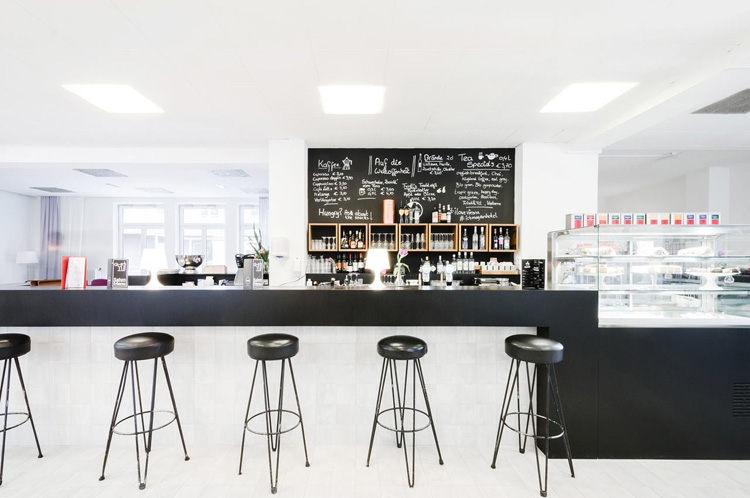 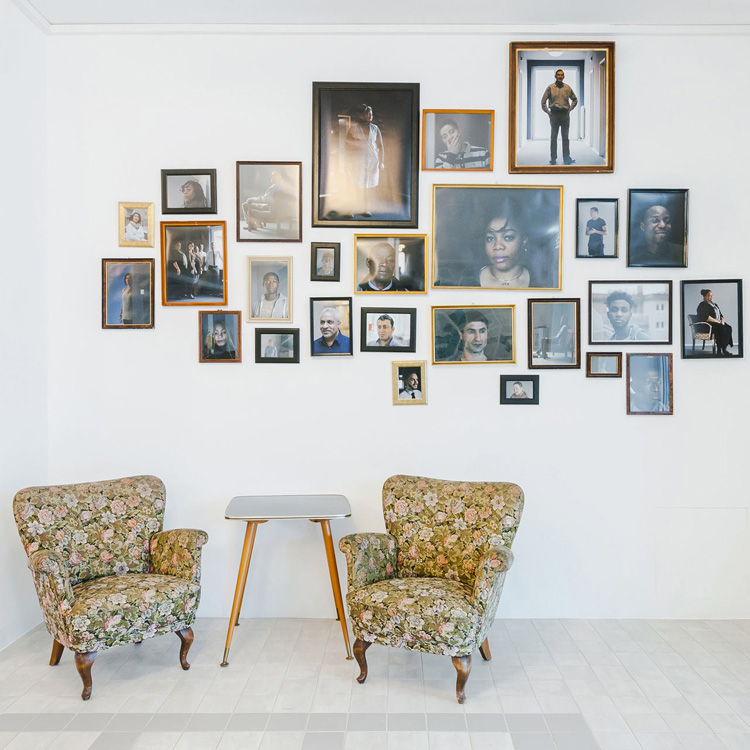 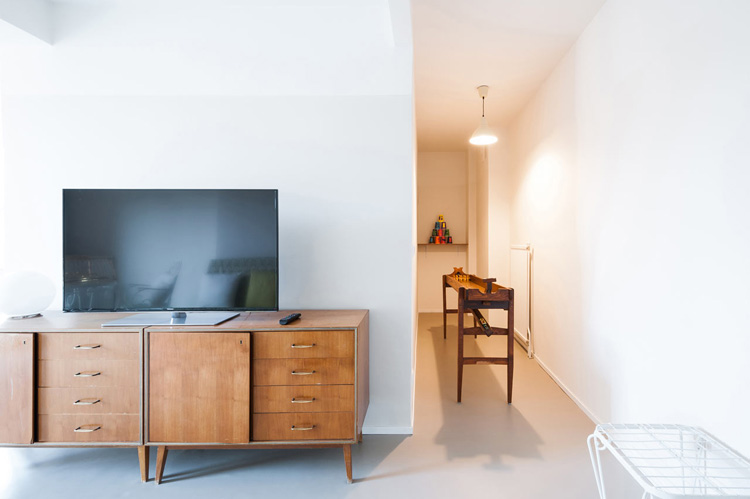 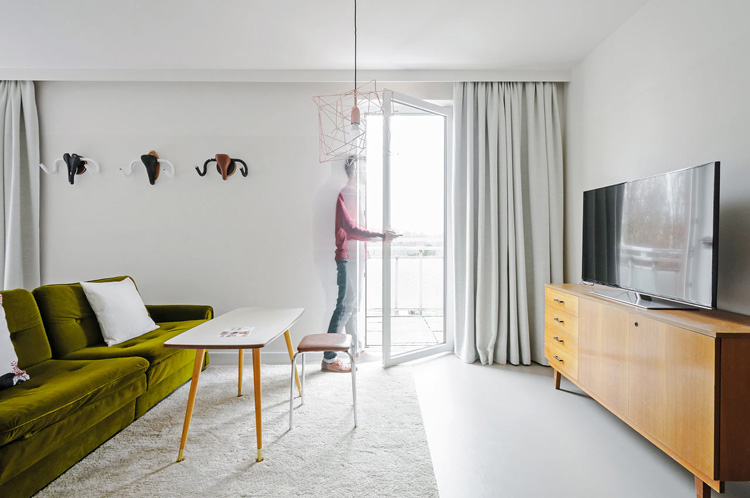 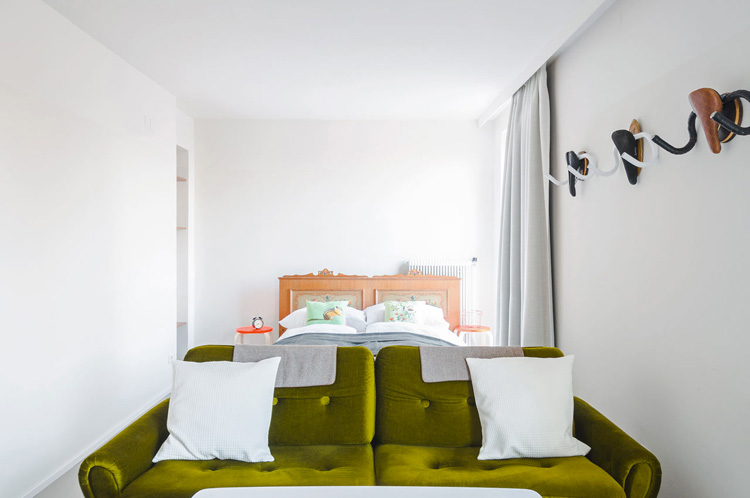 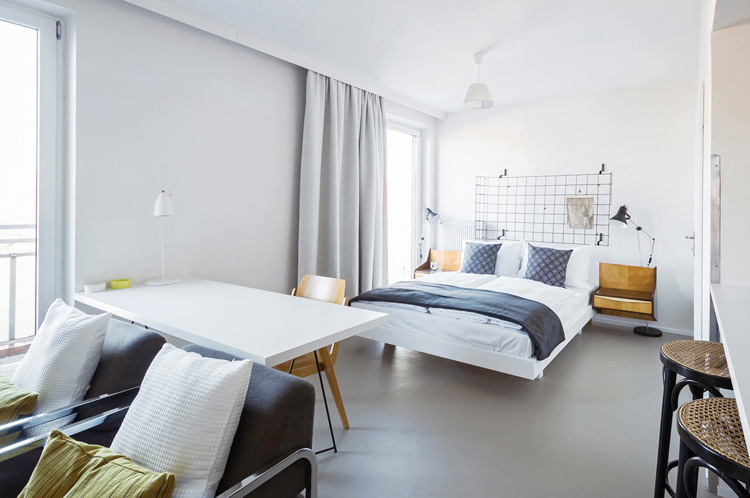 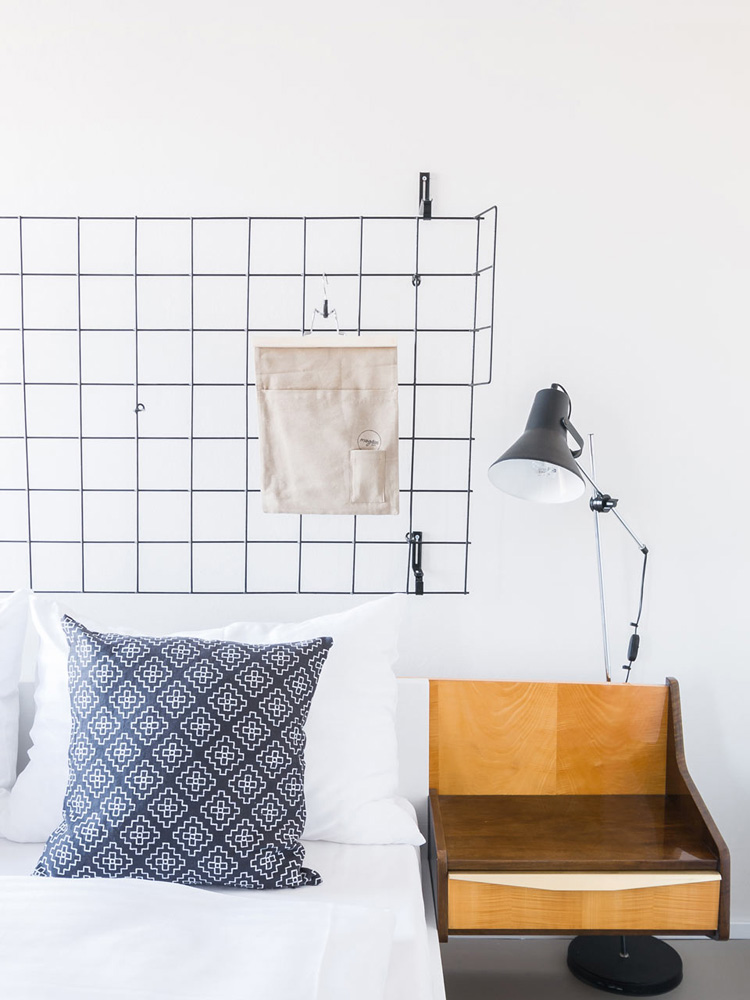 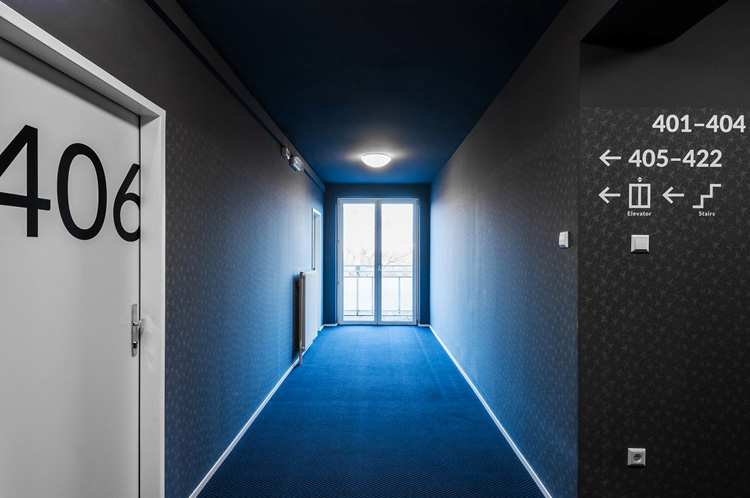 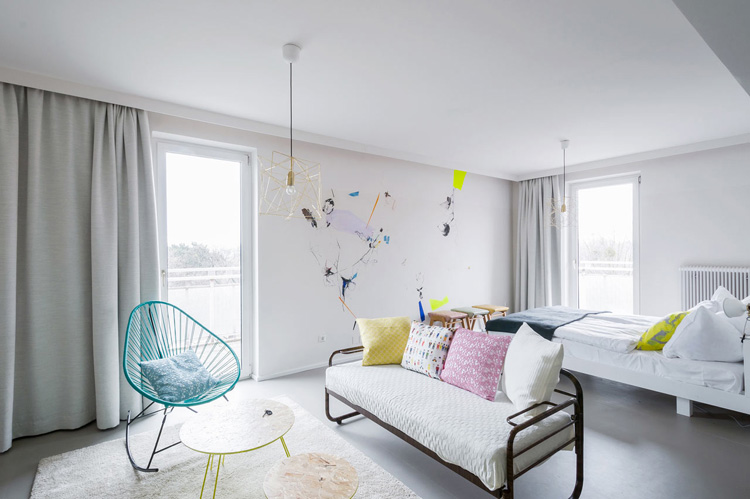 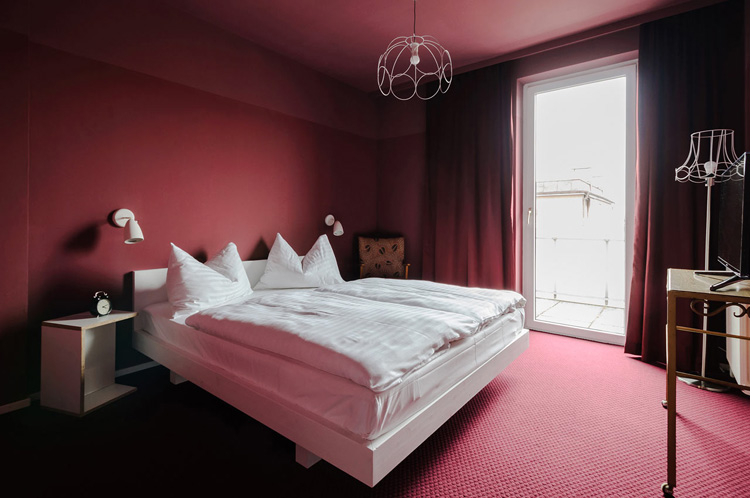 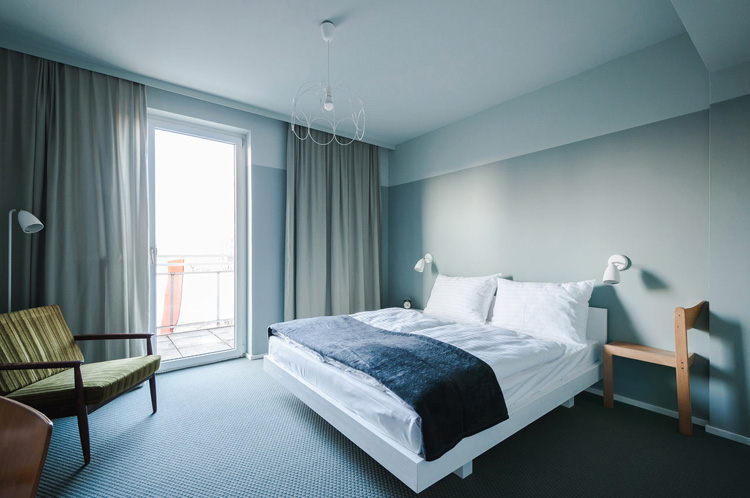 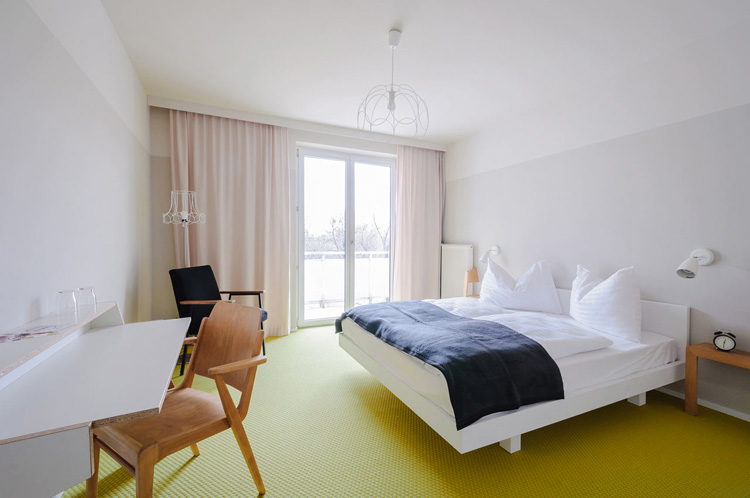 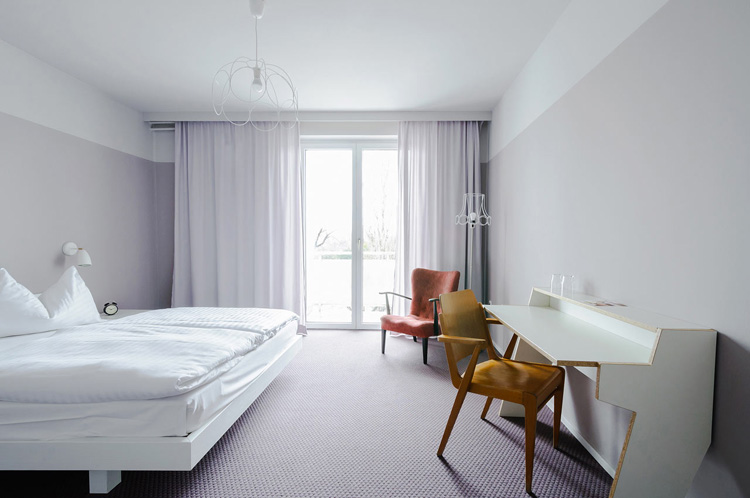 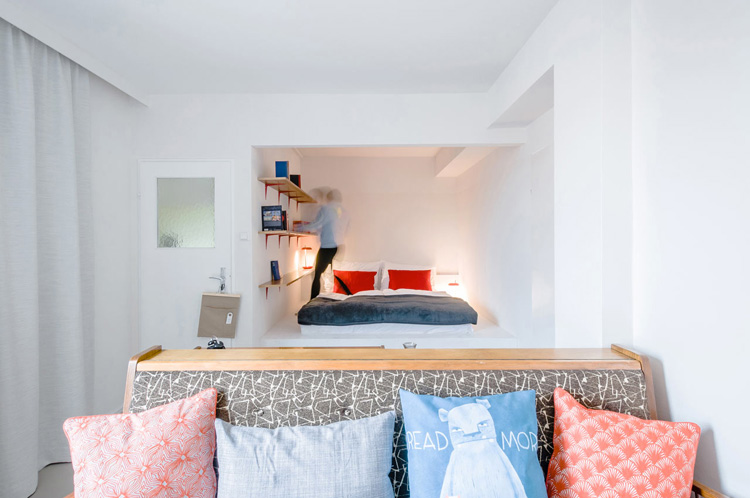