After a very fast construction period of only two months a striking new pavilion shines in the heart of Rotterdam. Mei architects and planners designed this new McDonald’s pavilion on Coolsingel Rotterdam. The former kiosk was once voted the ugliest building in Rotterdam and no longer reflected the wishes and ambitions of either McDonald’s and the city of Rotterdam.

Rotterdam has recently showed up in the top 10 of ‘places to go’ of the New York Times and the Rough Guide. This new pavilion is an architectural masterpiece that adds to the series of Market Hall, Central Station and Fenix Food Factory. It is a welcome asset to Rotterdam, the city of architecture. 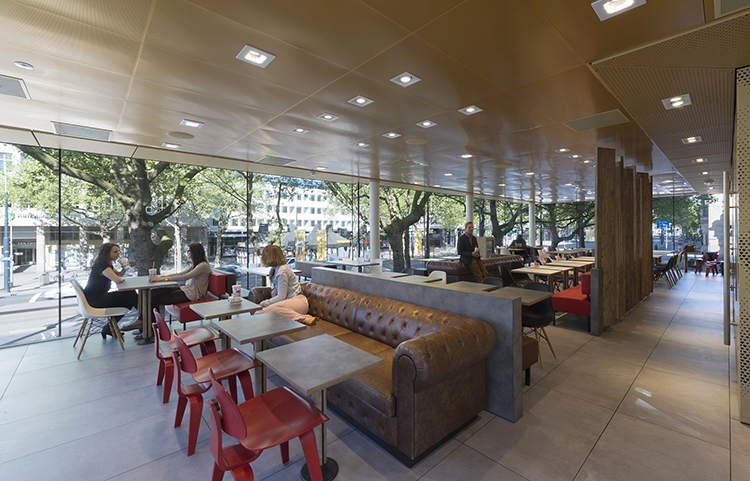 The new building volume has been carefully detailed and articulated by Mei to open up views of the monumental post office behind it. As a result, the pavilion has the most compact possible core, with glazed façades all around. A fully transparent lobby, with entrances on three sides, makes it seem as though the public space flows through the building.

To strengthen the connection between the pavilion and its surroundings, the outdoor terrace will feature the same furniture found in other public spaces in the city of Rotterdam. 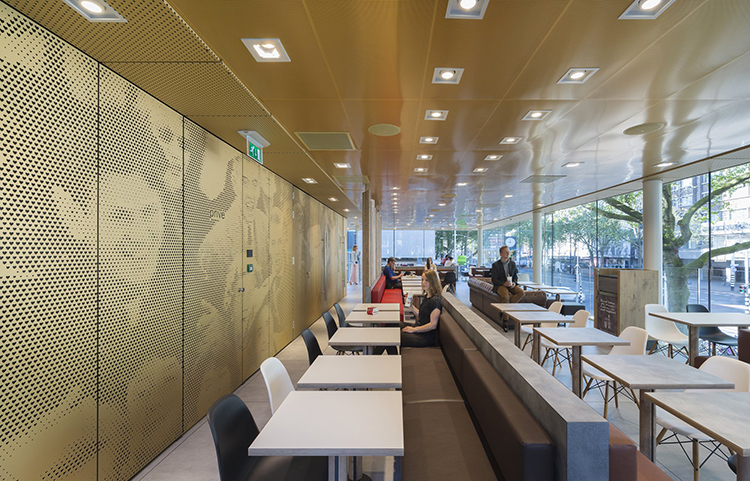 Like the historical buildings in the area, the pavilion features a richly articulated façade, carried out in one single material: gold anodized aluminum. This warm and elegant-looking material is vandal-proof and enduring at the same time. 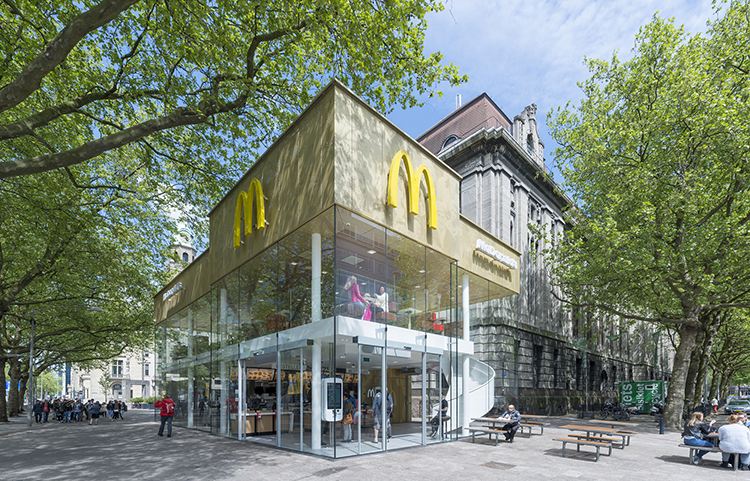 As McDonald’s is open day and night (24/7), its appearance after dark is important. By day the building is inviting to shoppers, while in the evening it glows to attract the nightlife crowd. The skin is perforated with heart-shaped openings to form a ‘veil’ around the glazed building through which illumination shines. This skin is continued in the interior walls and ceilings. With the application of various degrees of perforation, the façade depicts a crowd of people on Coolsingel. After all, the new McDonald’s is built for the people of Rotterdam, who now have yet another reason to be proud of their city. 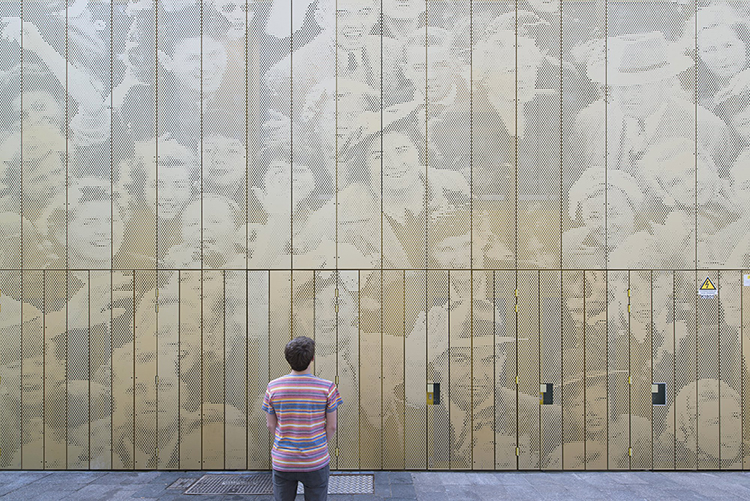 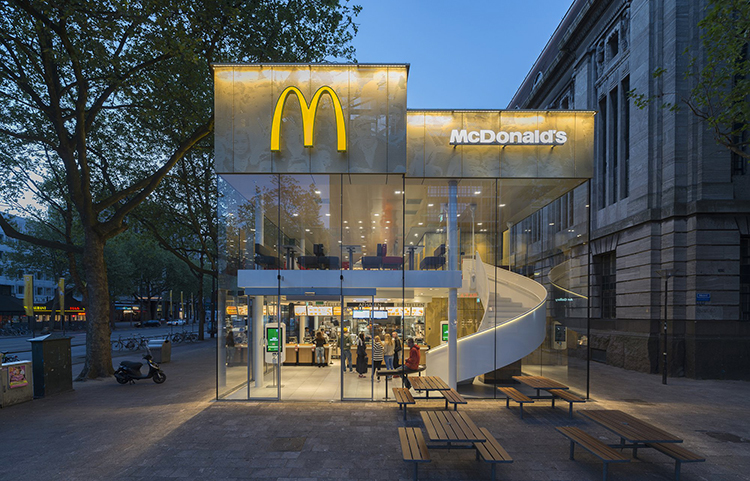 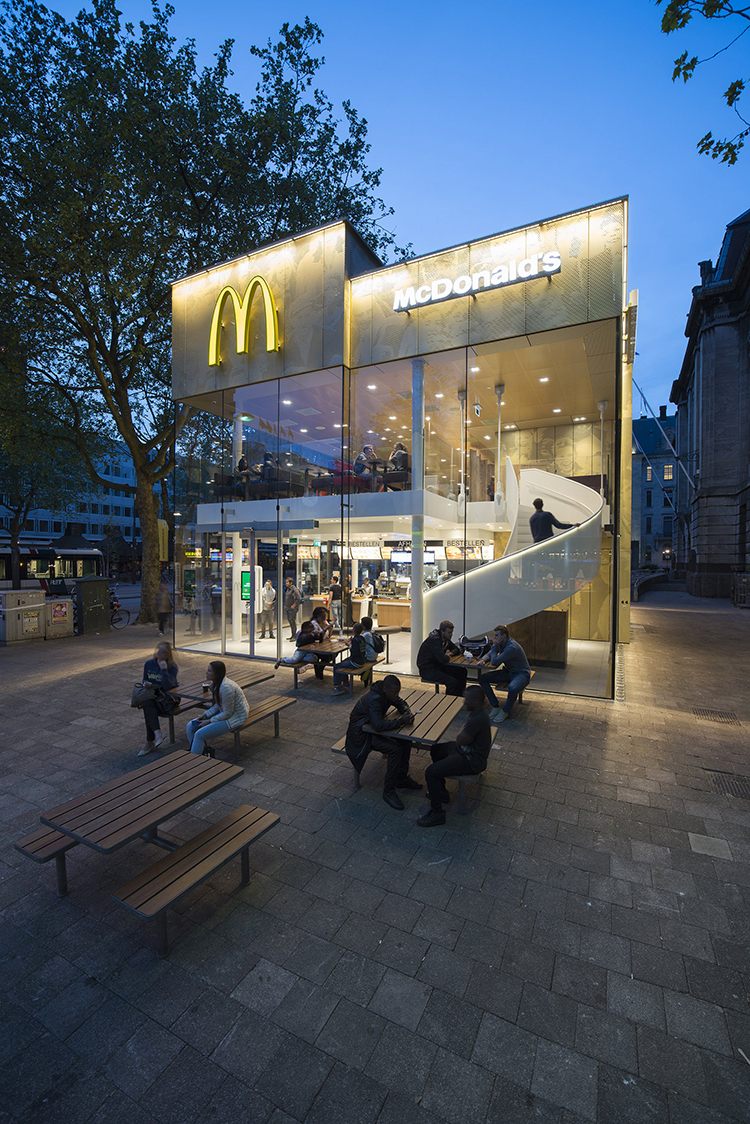 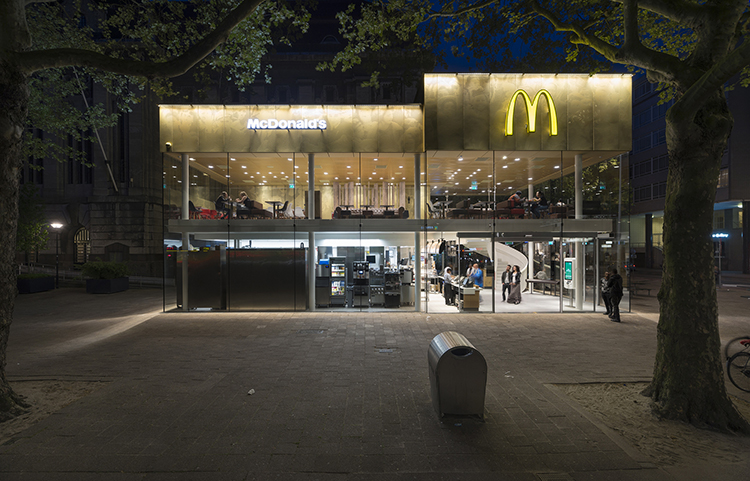 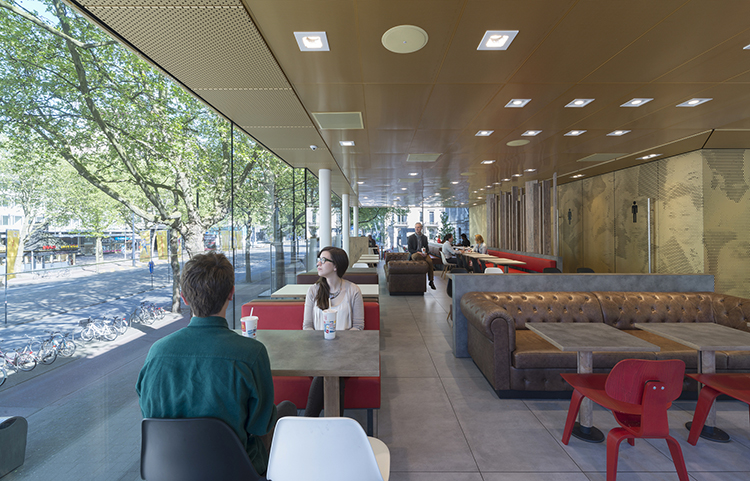 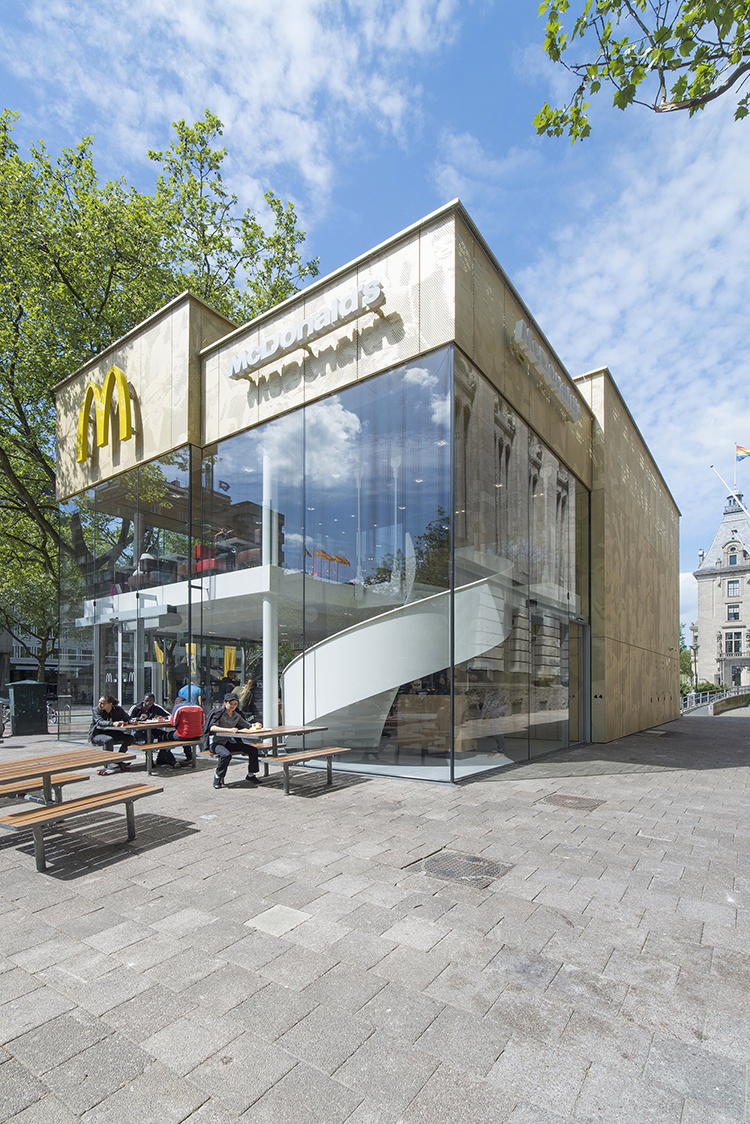 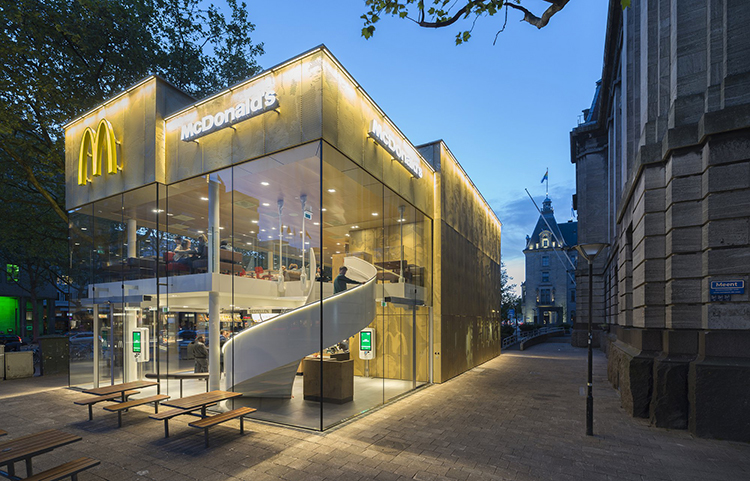 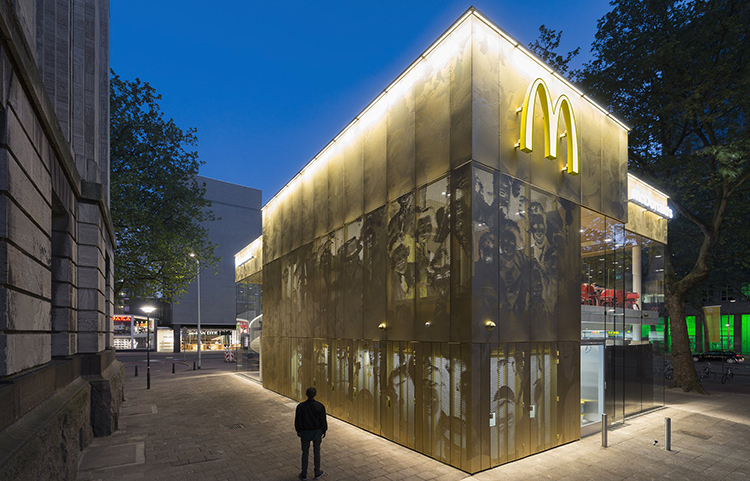 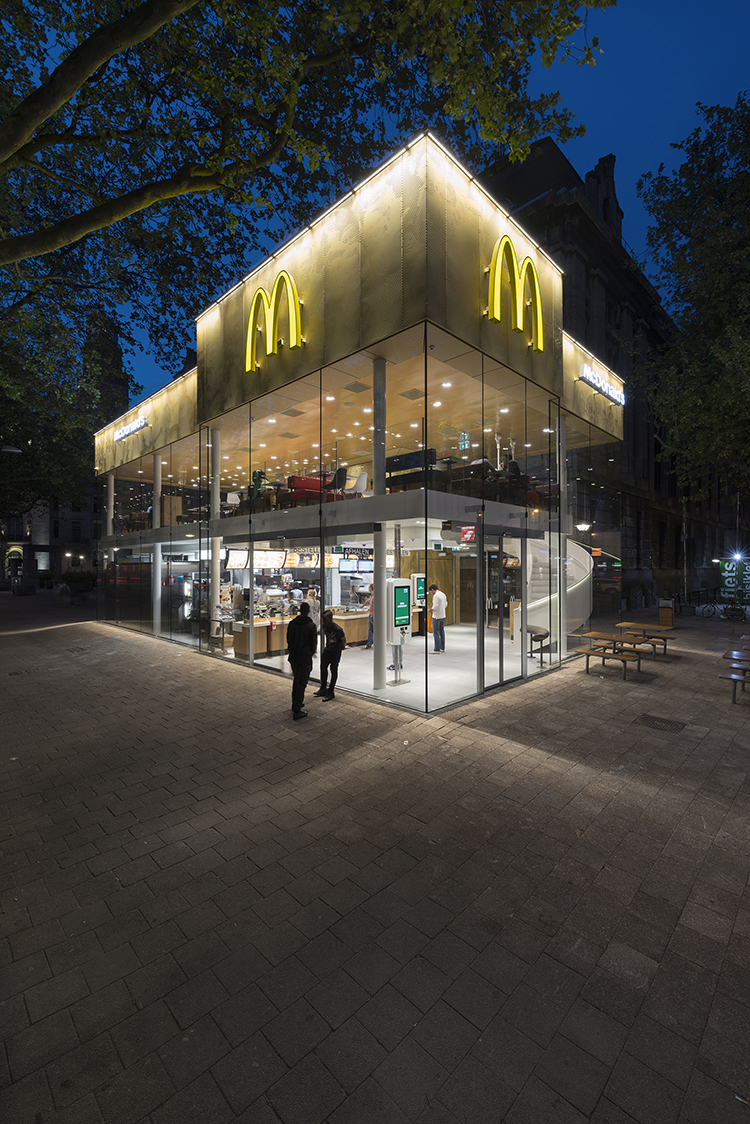 all images © Jeroen Musch courtesy of Mei architects and planners