The interior design and identity evokes an eclectic mix and conglomeration of different streets and alleys, packed with rich colours, textures, prints, lights and different seating areas with smoking woks and steamers in the background. The restaurant is divided in five spaces, each with a unique identity, capturing the organised chaos that characterises Asian streets. 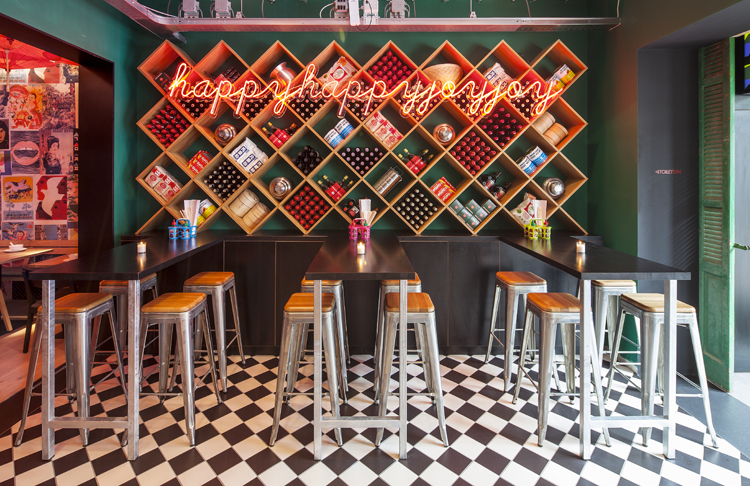 Passers-by are drawn in by the large logo, written in neon on the façade, with 18 richly coloured light boxes just behind the windows. The entrance of the restaurant refers to an alley, with a second façade equipped with a custom made wall of louvre doors. The alley is dedicated for quick, on the go food where it features different sized light boxes and high tables complemented with industrial-styled bar stools.

The galvanised steel bar, accompanied by 17 barstools, is centrally situated in the front of the restaurant and crowned by a bottle-rack filled with Asian beers, wines, sakes, spirits and careful selected teas. The walls around the bar are painted in a jade green. Two oak cabinets, placed on opposite walls, provide extra storage space. 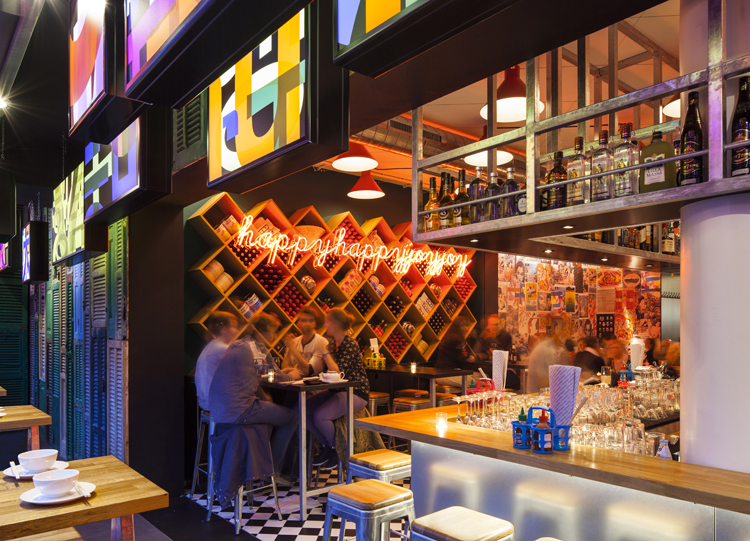 The central restaurant space radiates a completely different, and even more asian-influenced ambience. The walls are covered in colourful artwork, featuring a collection of posters and pamphlets collected in Asia, and some created specifically for happyhappyjoyjoy. Most distinctively, is the collection of overlapping paper umbrellas that hang upside-down from the ceiling and softly illuminates the red. 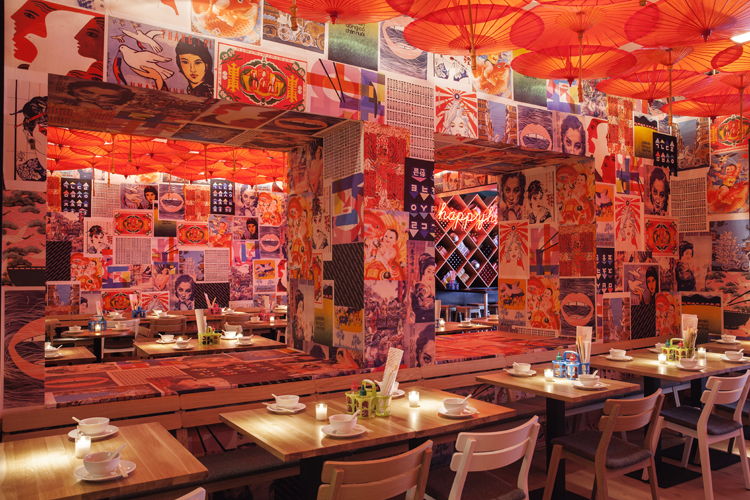 The kitchen is connected to the back street alley. A steel wall of hawker stalls rises in the back with four openings framing the kitchen where woks, steamers and gas burners bring the restaurant to Asian temperatures. The alley contains high tables and bar stools for groups to enjoy the spectacle in the kitchen. The wall opposite to the kitchen is painted in black chalkboard paint and celebrates Julius Jaspers’ recipes in step-by-step drawings. The alley is illuminated by five huge Proplights by Bertjan Pot for moooi featuring bulb lights, reminiscent of garlands of random streetlights as seen in pop-up street food stalls. 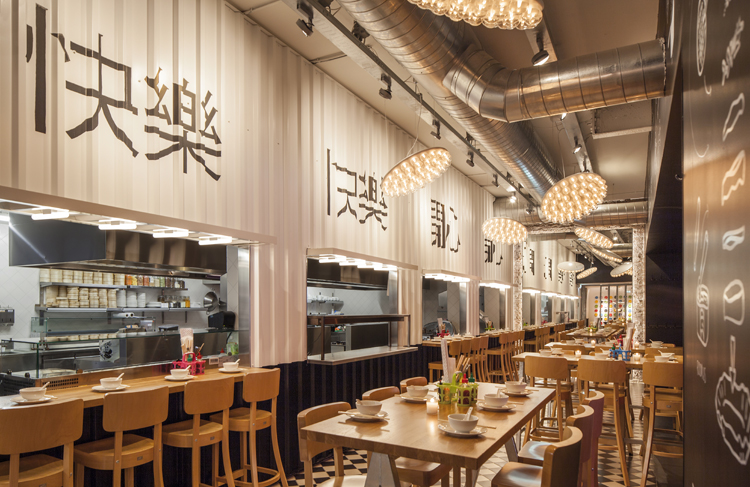 The private dining of happyhappyjoyjoy is located on the left-end of the back street alley. The walls are decorated in the same way as the alley, but the spaces can be closed off using steel doors set with glass panels. Behind the table, which offers eight seats, an artwork of 99 melamine sushi plates in six different colours completes the space. 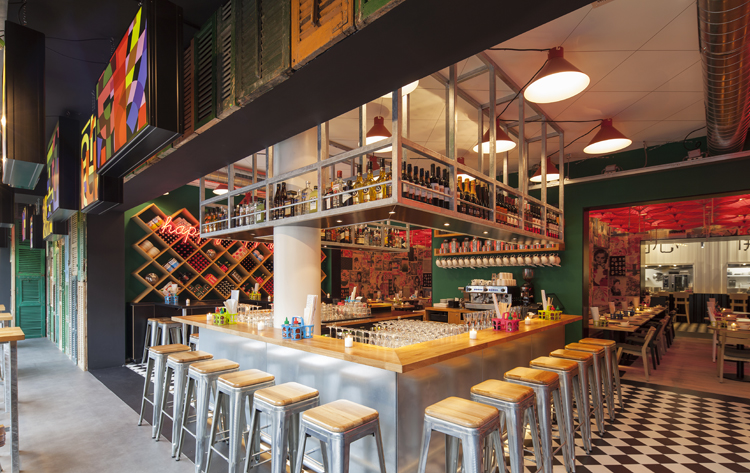 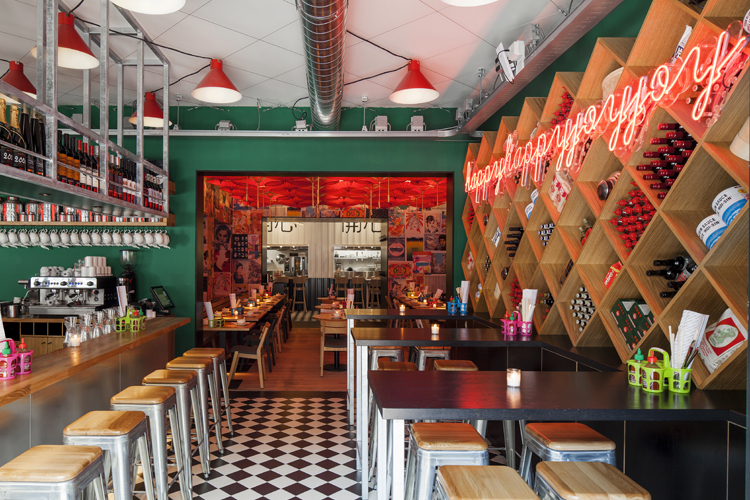 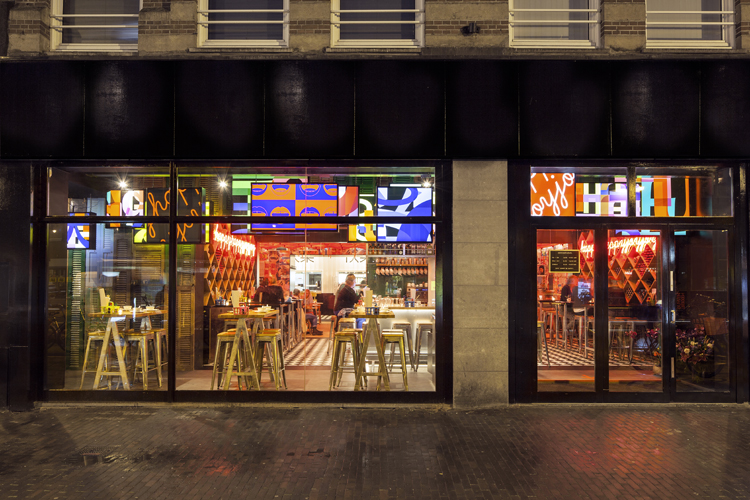 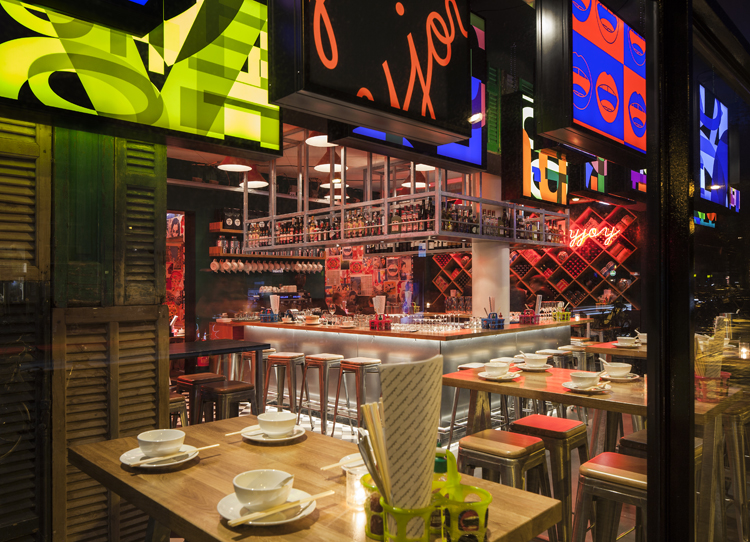 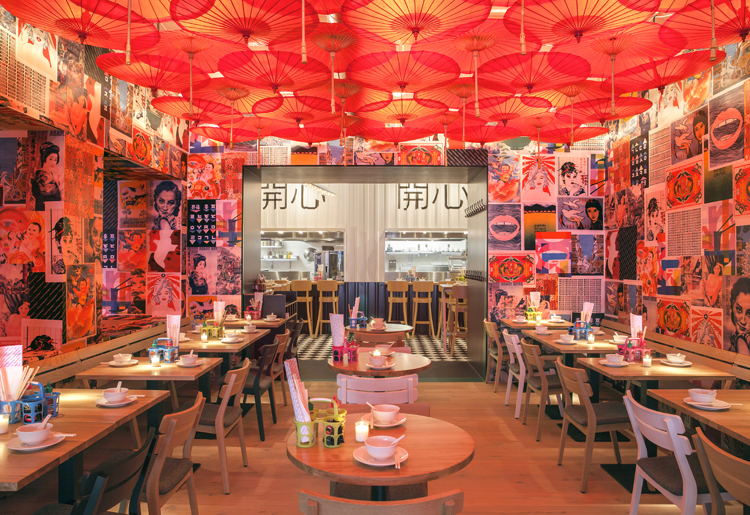 all images by Wouter van der Sar for concrete