The new San Francisco Museum of Modern Art is set to reopen to the public on Saturday, May 14, after three years of renovation. Completed by snøhetta, the expanded SFMOMA seamlessly integrates a 10-storey structure with the original 1995 Mario Botta-designed building.

The new museum will accommodate the significant growth of SFMOMA’s collection, program and visitorship. The expansion nearly triples the museum’s gallery space, including nearly 45,000 square feet of free public-access space and weaves SFMOMA into its urban setting as never before. 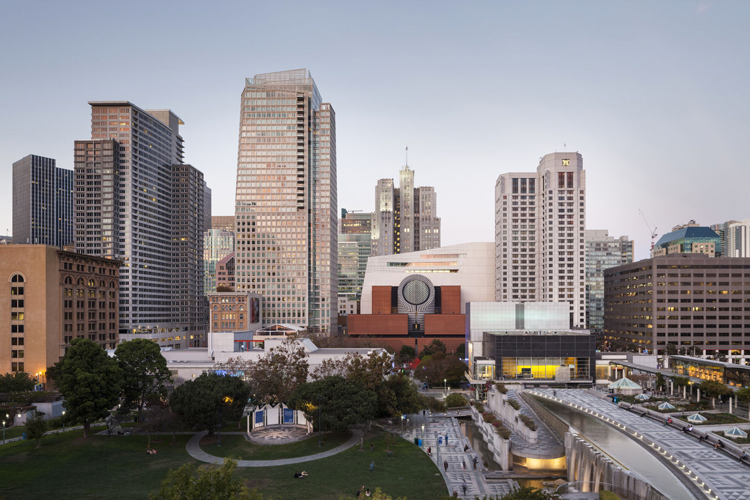 The project was conceived to create a more open and welcoming SFMOMA, with the volume of the expansion rising up behind the Botta building and stretching the full city block from Minna Street to Howard Street. This placement activates existing mid-block streets as pedestrian pathways and opens up new entrances, deeply integrating the museum into the South of Market (SoMa) neighborhood, including nearby Yerba Buena Gardens and the Moscone Center.

Two entrances on Third and Howard Streets connect visitors to free ground-floor exhibition spaces that include a presentation of Richard Serra’s monumental sculpture Sequence (2006) in the Roberts Family Gallery, where the museum will present commissioned works in the future. A reconfigured entrance on Minna Street welcomes school groups to the Koret Education Center, as well as visitors attending performances in the Phyllis Wattis Theater and the White Box performance and installation space. 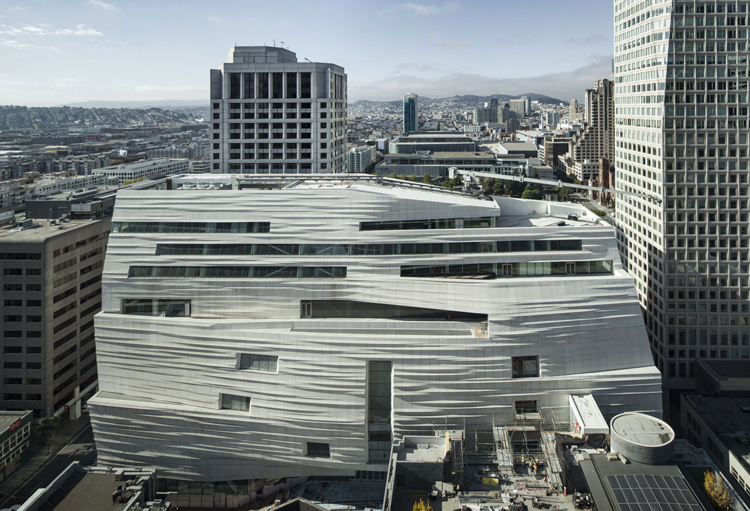 The pathways from all three public entrances converge at the second-floor Helen and Charles Schwab Hall, a spacious gathering place with views to an outdoor sculpture terrace and the museum’s new vertical garden, the largest living wall of native plants in the Bay Area. In Schwab Hall, visitors may pass from the free ground-floor exhibition spaces into the upper floors of ticketed galleries for the permanent collection and special exhibitions. 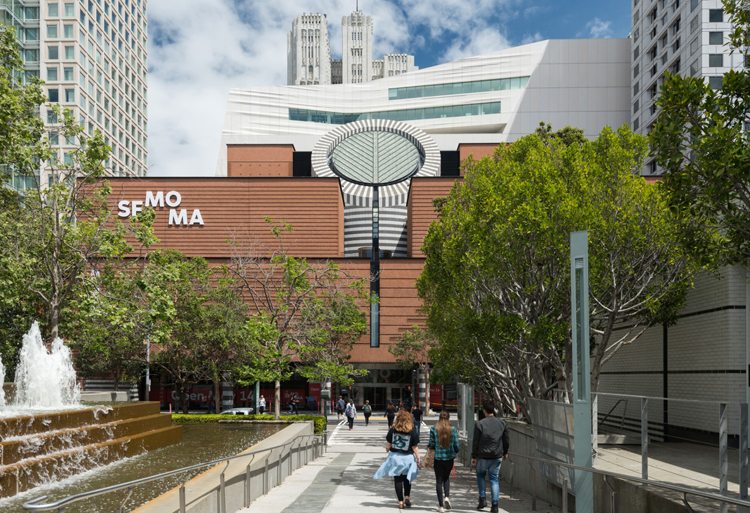 The façade of the Snøhetta expansion, inspired in part by the fog and the waters of the San Francisco Bay, comprises more than 700 uniquely-shaped FRP (fiberglass-reinforced polymer) panels affixed to a curtain-wall system to create rippling horizontal bands which appear to shift in appearance with the changing light. 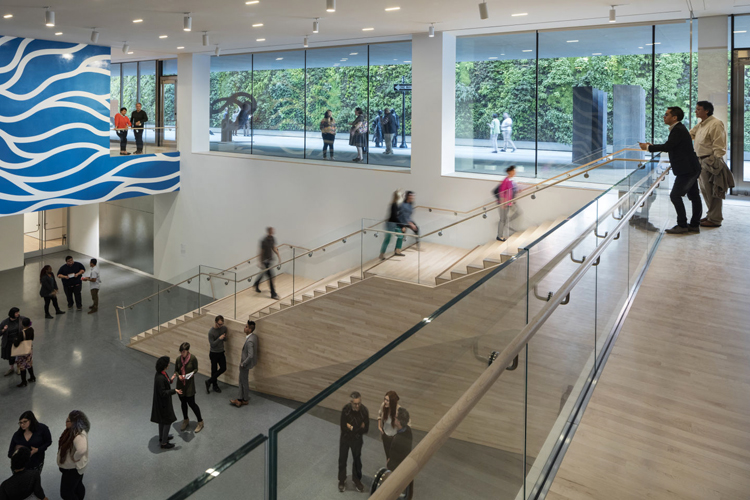 A new sculptural staircase designed by Snøhetta leads visitors from the Haas, Jr. Atrium to the second floor. Located beneath Botta’s iconic oculus and Alexander Calder’s mobile Untitled (1963), it replaces the original 1995 stair. Opening up the space, the new, sculptural stair helps make a seamless connection between the existing and new buildings and accommodates the occupancy needs of the expanded museum.

Six outdoor terraces provide spaces for installations of sculpture, and from the seventh floor highlight a dramatic view of the San Francisco cityscape.

The largest living wall in the Bay Area provides a background for sculpture on the third floor terrace. With 16,000 plants, including 24 native plant species, the living wall is an ever-changing work of natural art supported with a recycled water system. 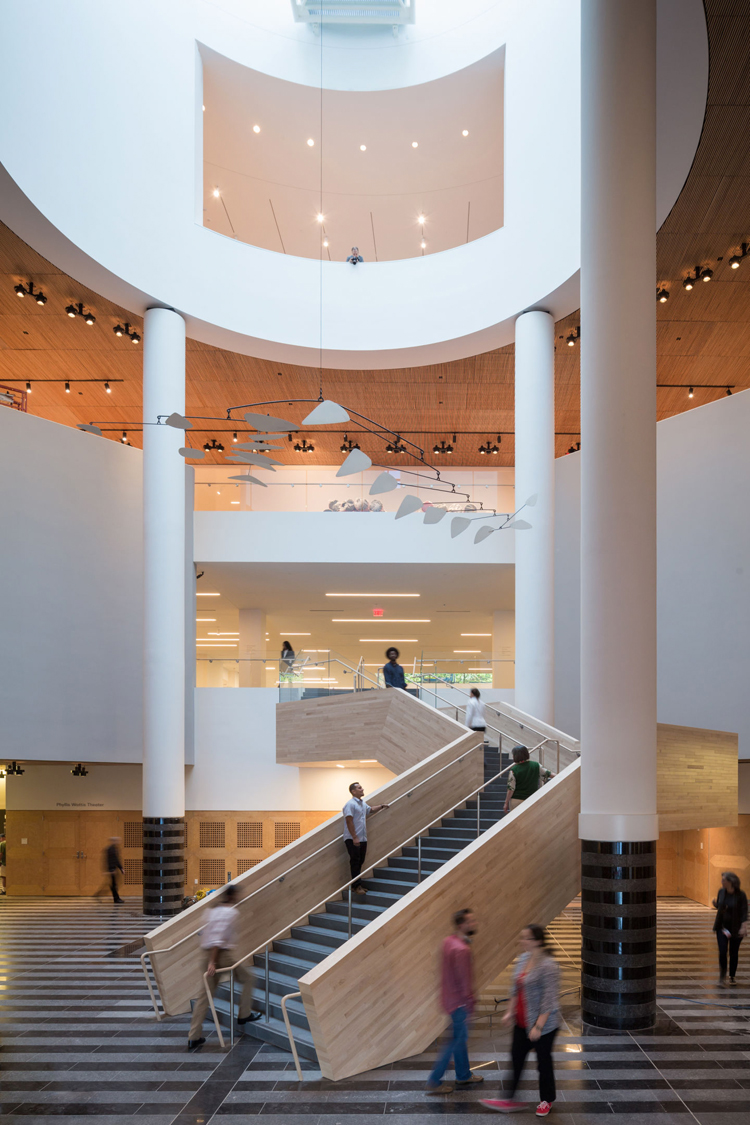 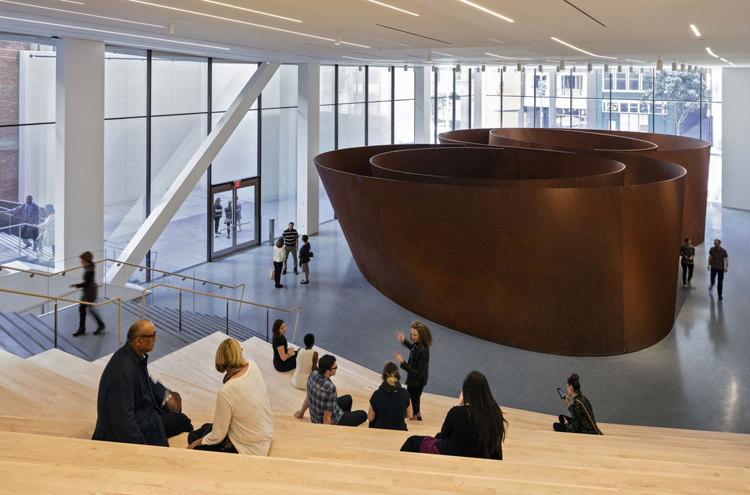 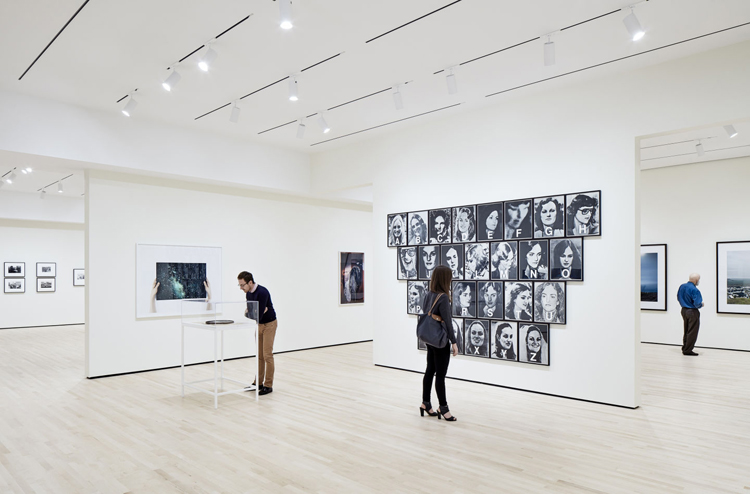 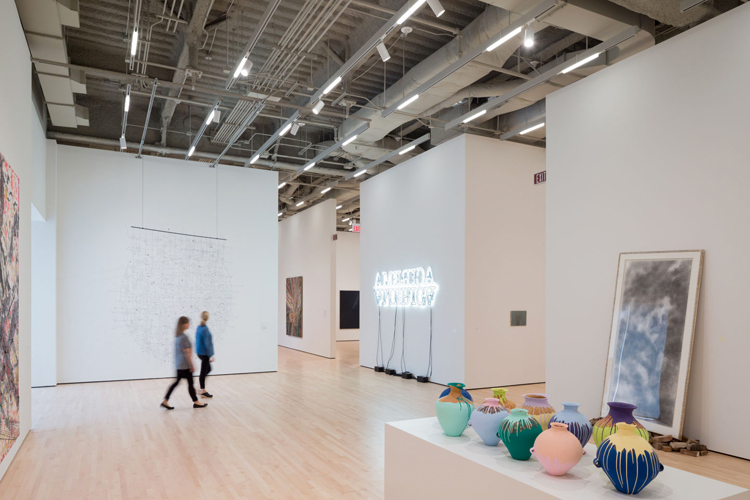 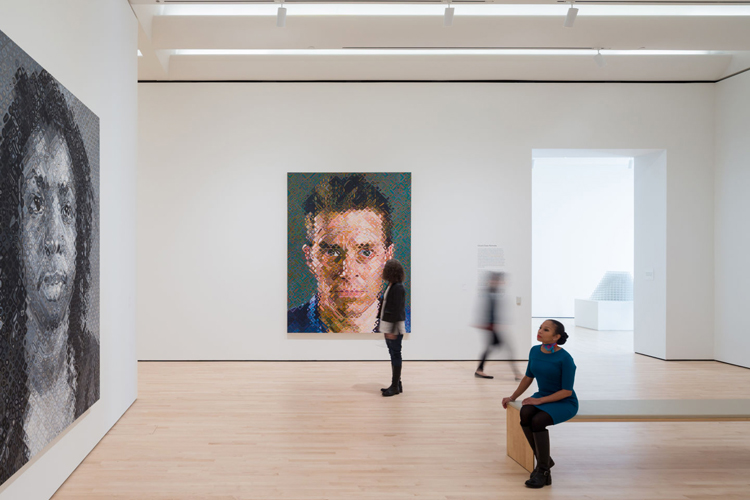 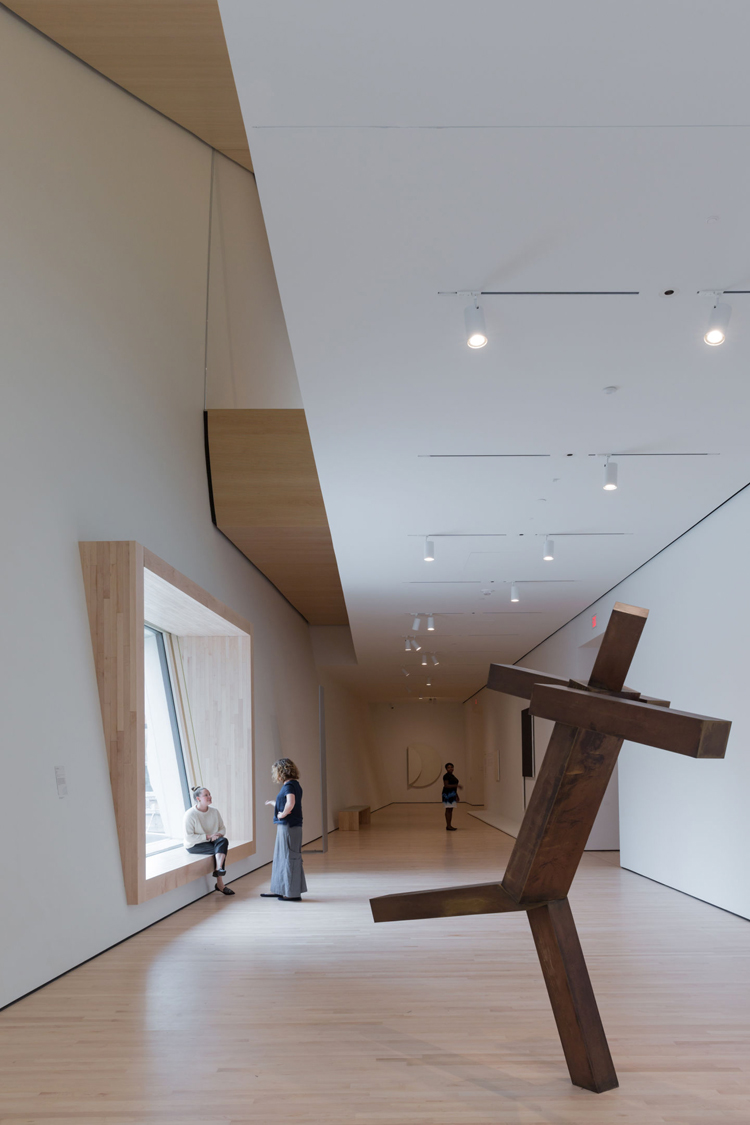 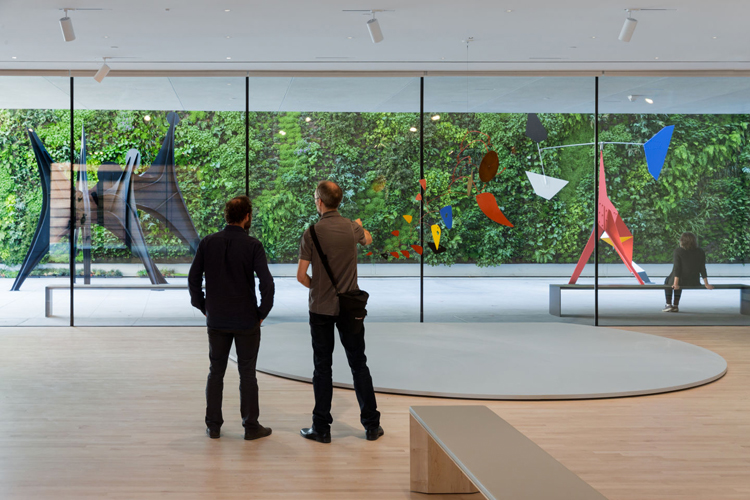 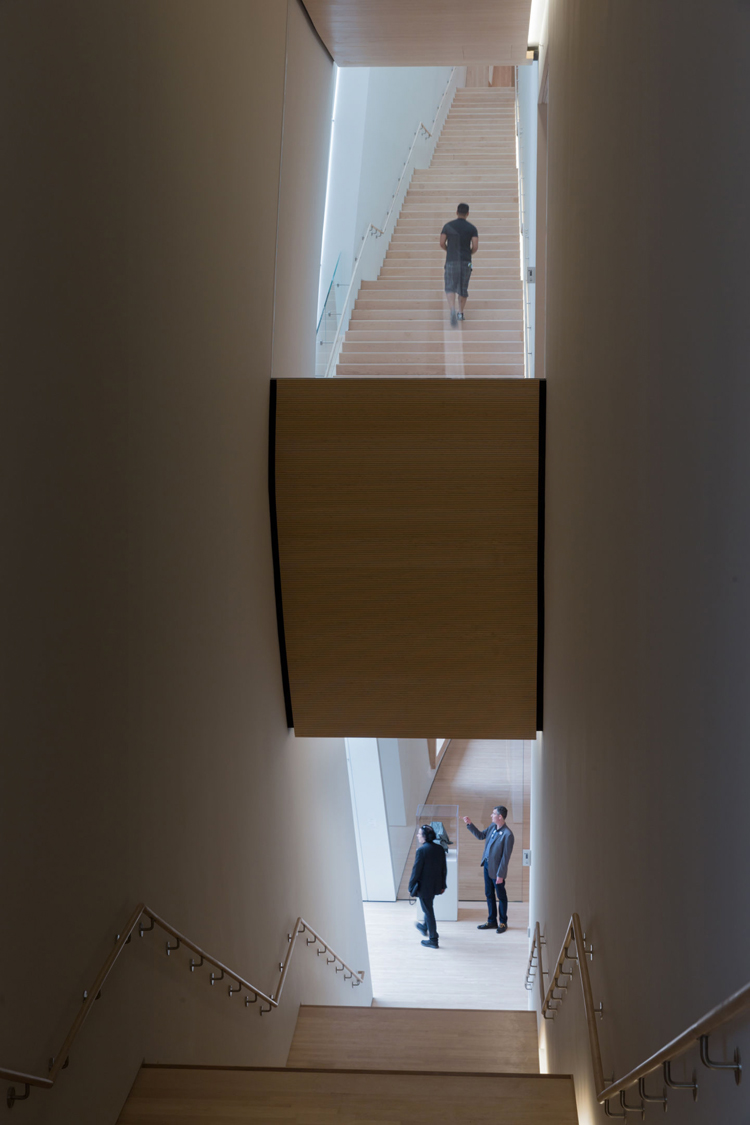 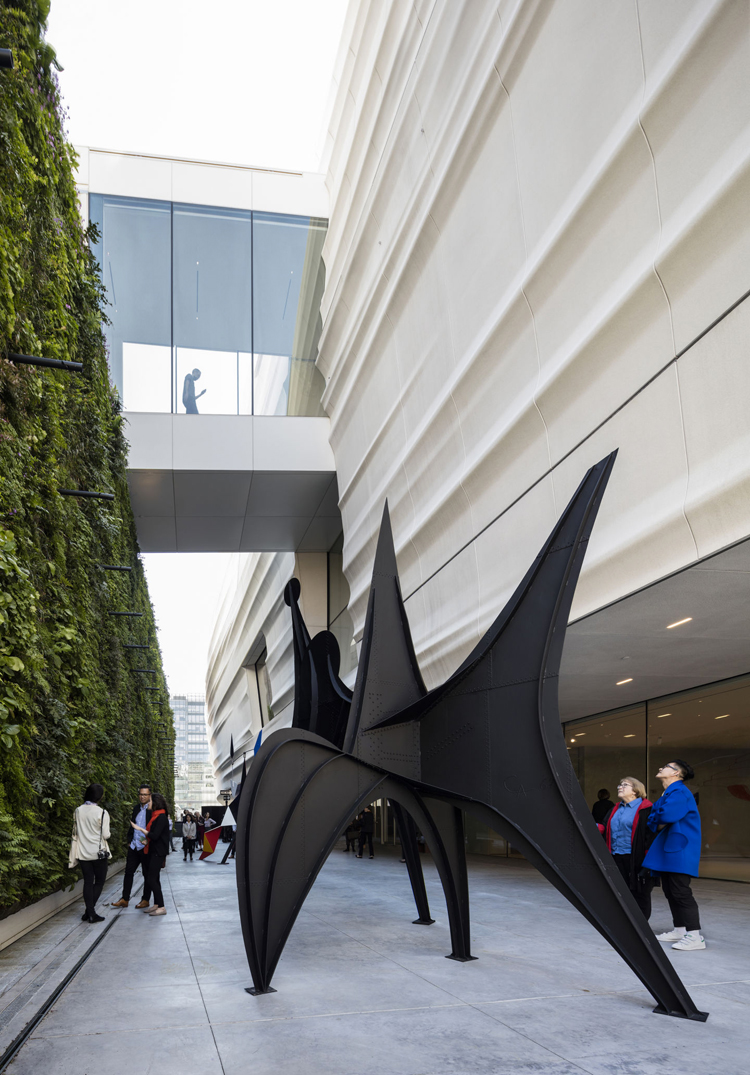 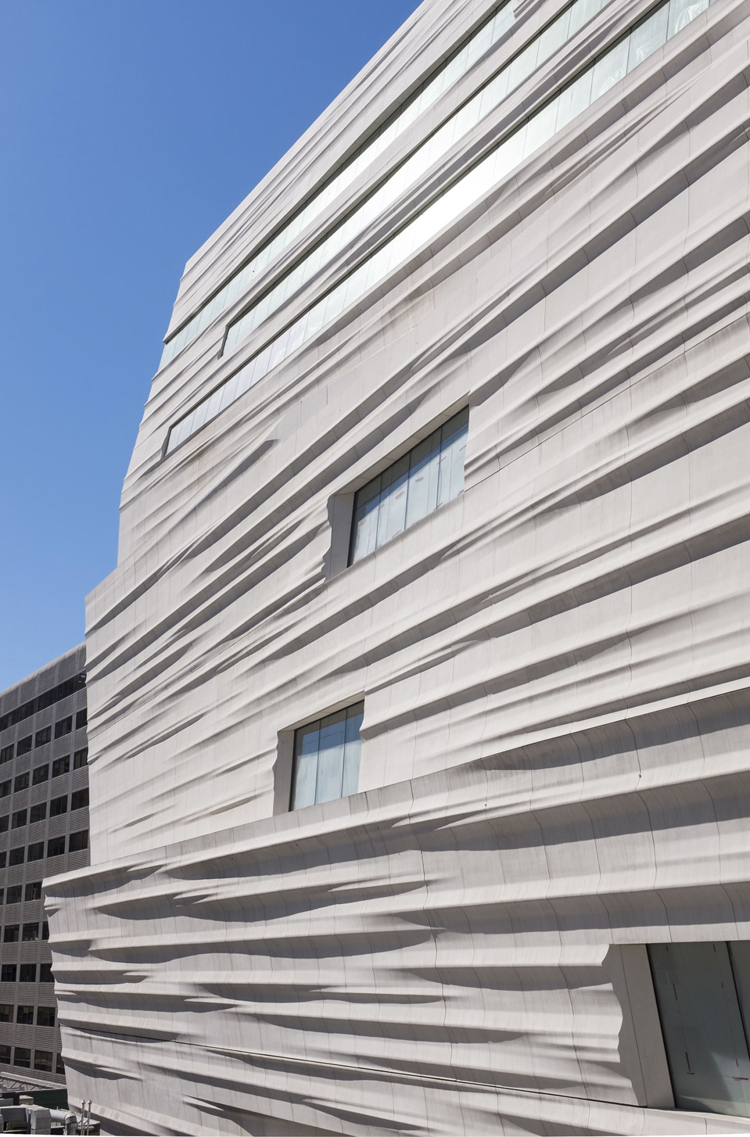 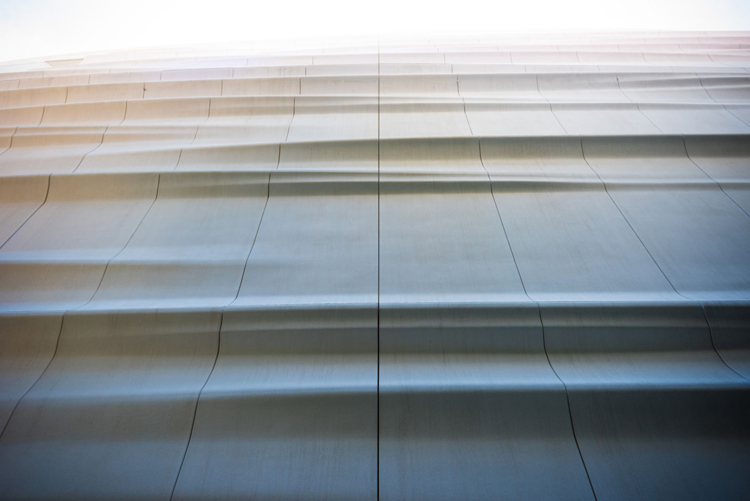 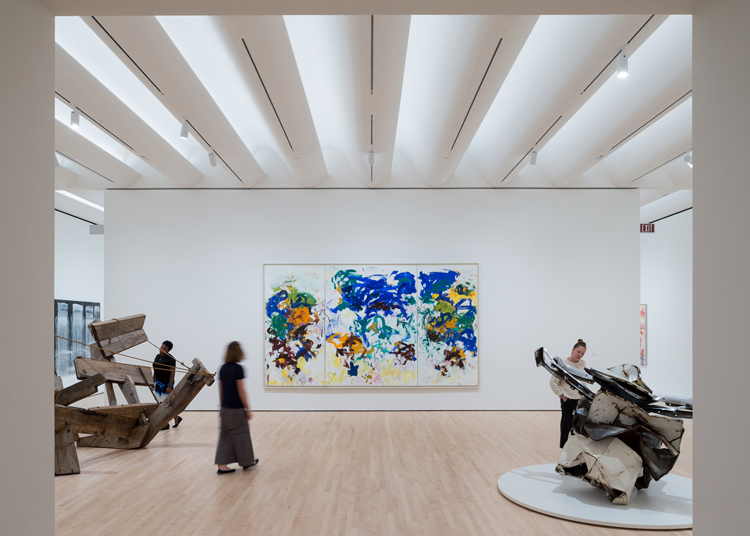 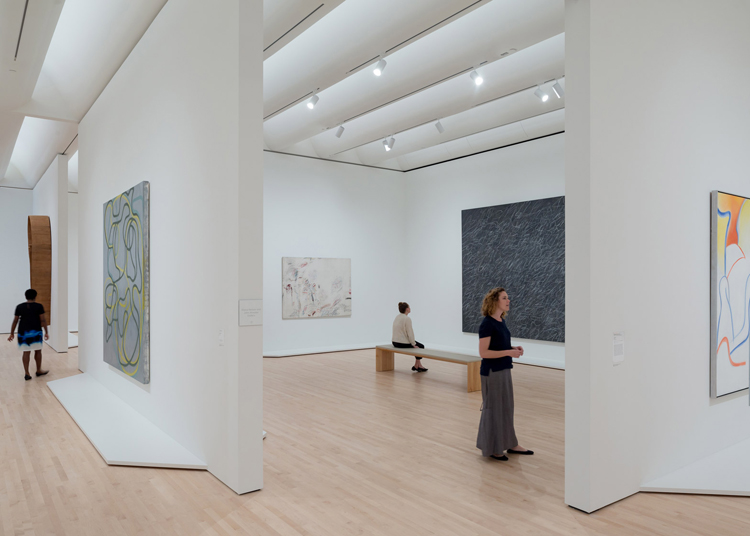 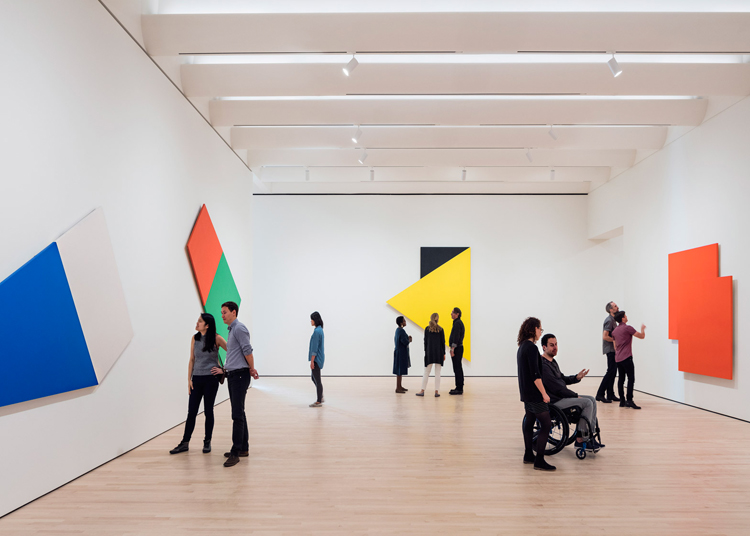 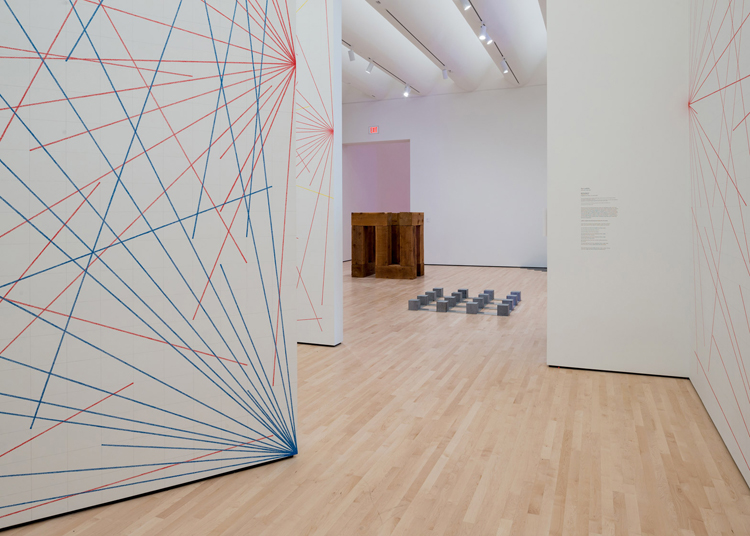 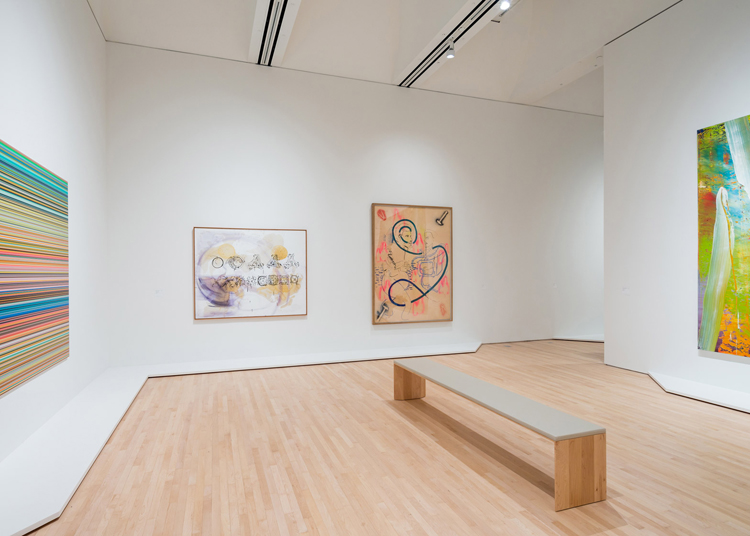 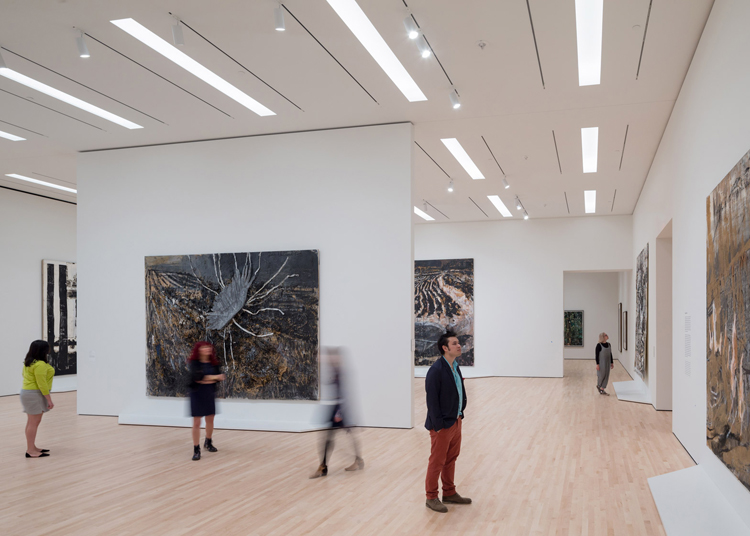 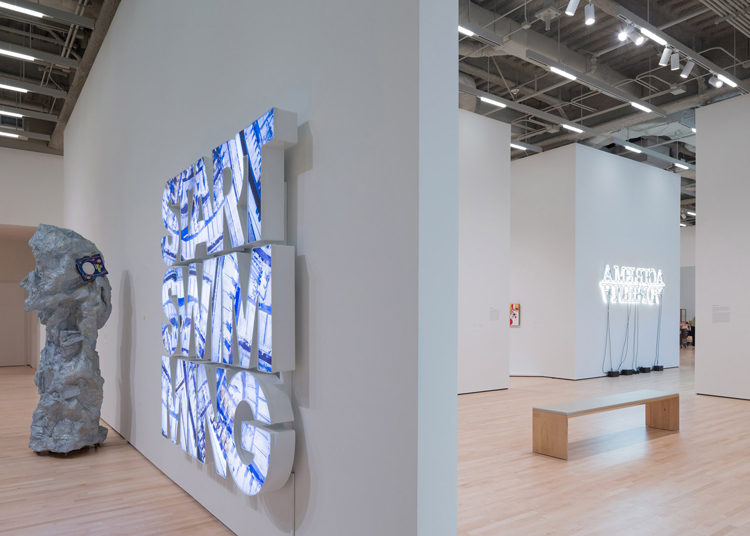 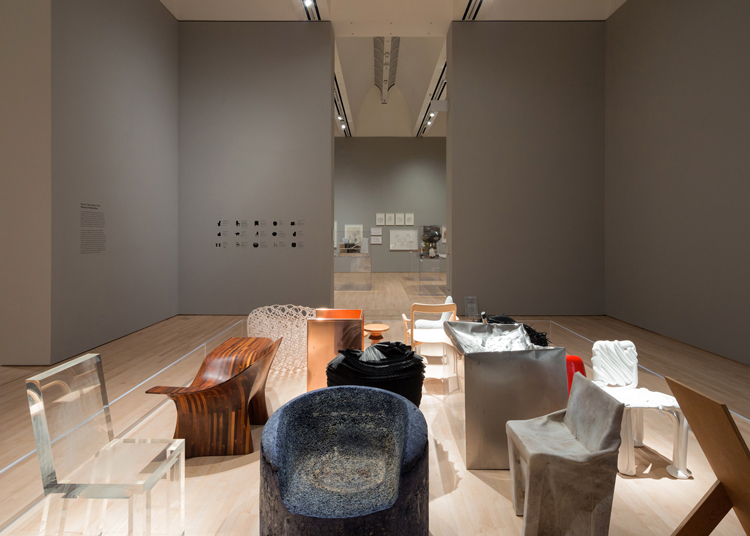 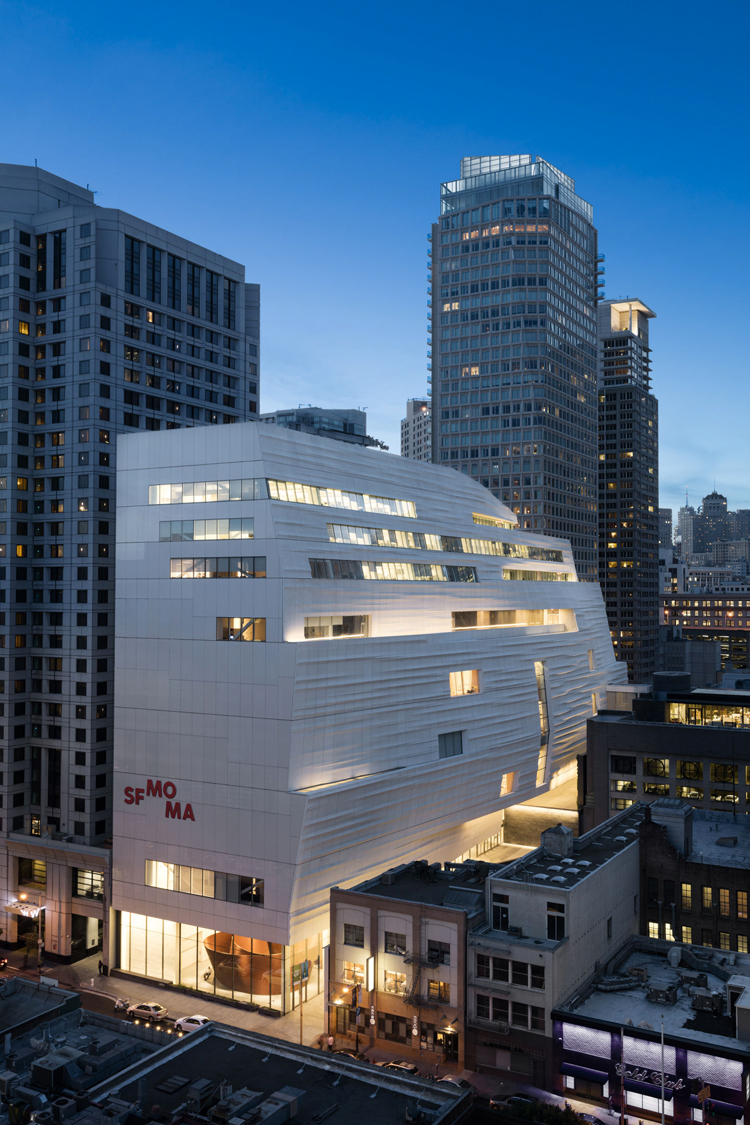