An eye-catching structure that blurs the distinction between a tower and a stairway floats high above the famous Kabouterbos (fairy tale forest) and draws the curiosity of many Tielt residents and passers-by. The structure known as Vlooyberg Tower was designed by Belgian engineering studio Close to Bone in the picturesque setting in the Tielt-Winge municipality. 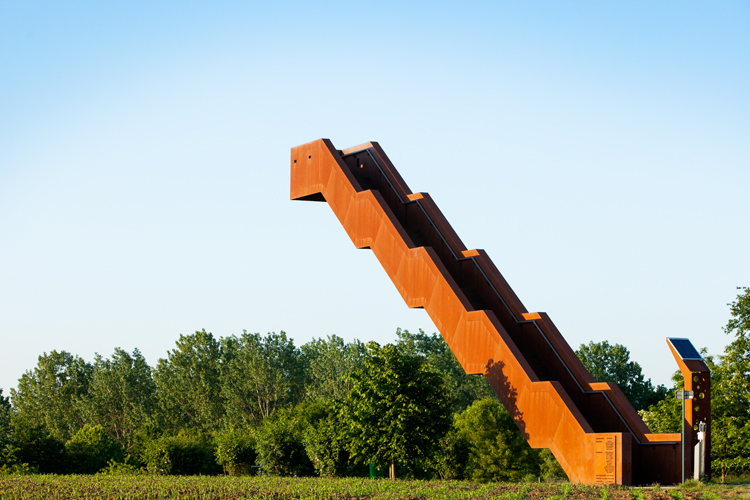 The story of the Tielt stairway tower goes back a long way. For many years, the hill to the west of the Vlooiberg was adorned by a wooden lookout tower about four meters in height. Aside from the all the youth of Tielt, unfortunately this tower also attracted vandals who irreparably damaged it by setting it on fire. The pride of Tielt-Winge had to be closed to the public for the sake of safety. Heated debates followed, and the municipality finally decided to replace the small wooden tower with a new, monumental object that would be able to withstand the ravages of time. 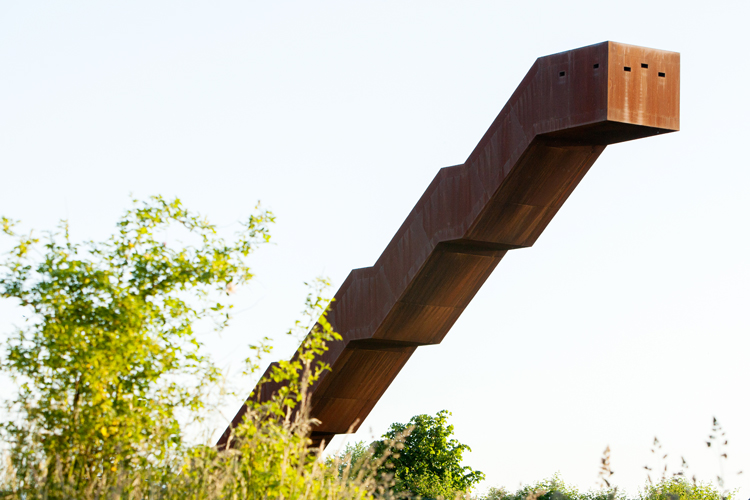 The requirements in the specifications reflected this goal: the new tower was to be made completely out of metal, be at least ten meters high, include a shelter and be resistant against any form of vandalism.
Instead of a conventional construction with a spiral staircase, the designer conceived a suspended volume without too many decorative frills. 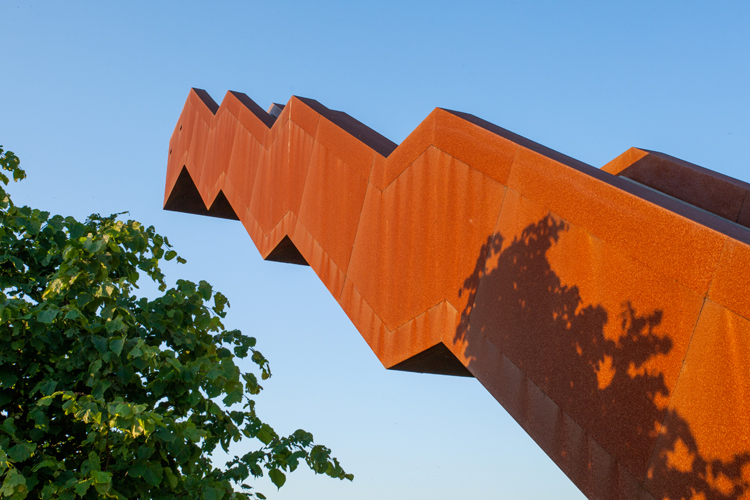 The “Vlooybergtoren” as it is called is 11.28 meters tall (the top platform comes out at 10.08 meters + 1.20 meter railing wall) and is built on a galvanized substructure that is clad in weathering steel, a subtle reference to the typical red-brown color of the ironstone in the Hageland region. All in all, the imposing stairway tower weighs no less than thirteen tons. 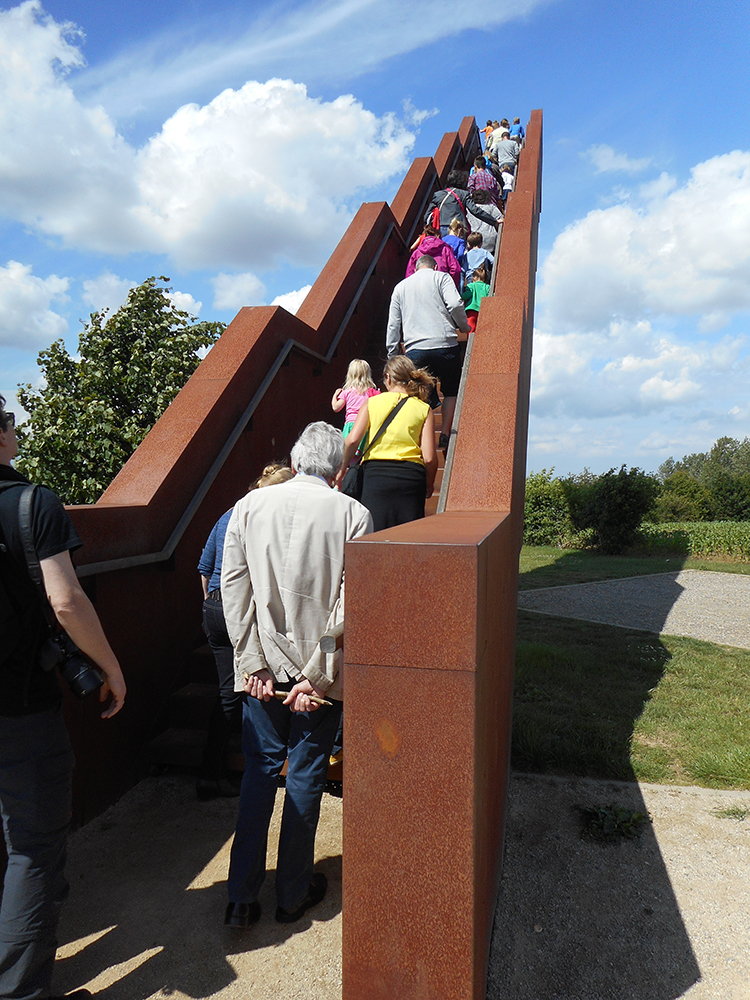 In the designer’s own words, modeling the Vlooyberg Tower was “a war against its own weight.” To ensure that the structure would be strong enough and would not sag, he manually calculated the forces acting in each element. His findings gave the stairway tower its ultimate form and dimensions. The structure evolves from large, heavy and strong, to small, light and slender. The railing wall functions as a structural beam that makes the steel structure strong and stable enough to withstand the forces acting on it. Two vibration dampers ensure that the stairway tower does not start to vibrate under foot. 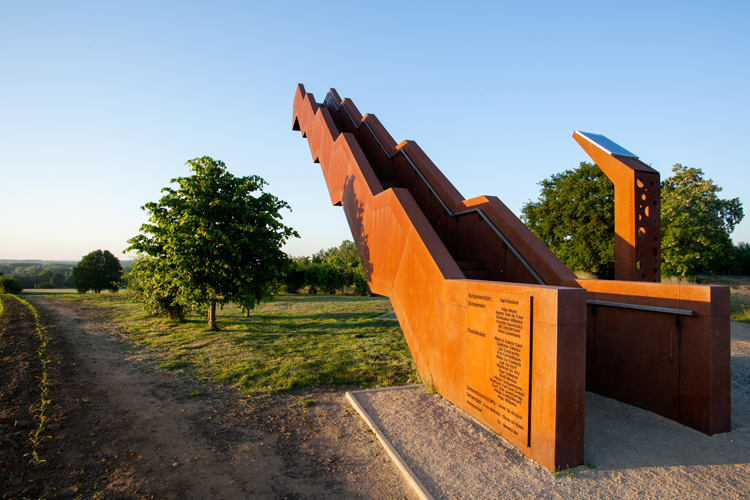 The structure was fully prefabricated and assembled on site section by section. In the end, it only took half a day to install. As a landmark with strong iconic value, the Vlooyberg Tower literally and figuratively raises the profile of the beautiful region around Tielt-Winge. Natives of Tielt, chance passers-by and fans of modern architecture all greatly enjoy this intriguing monument. 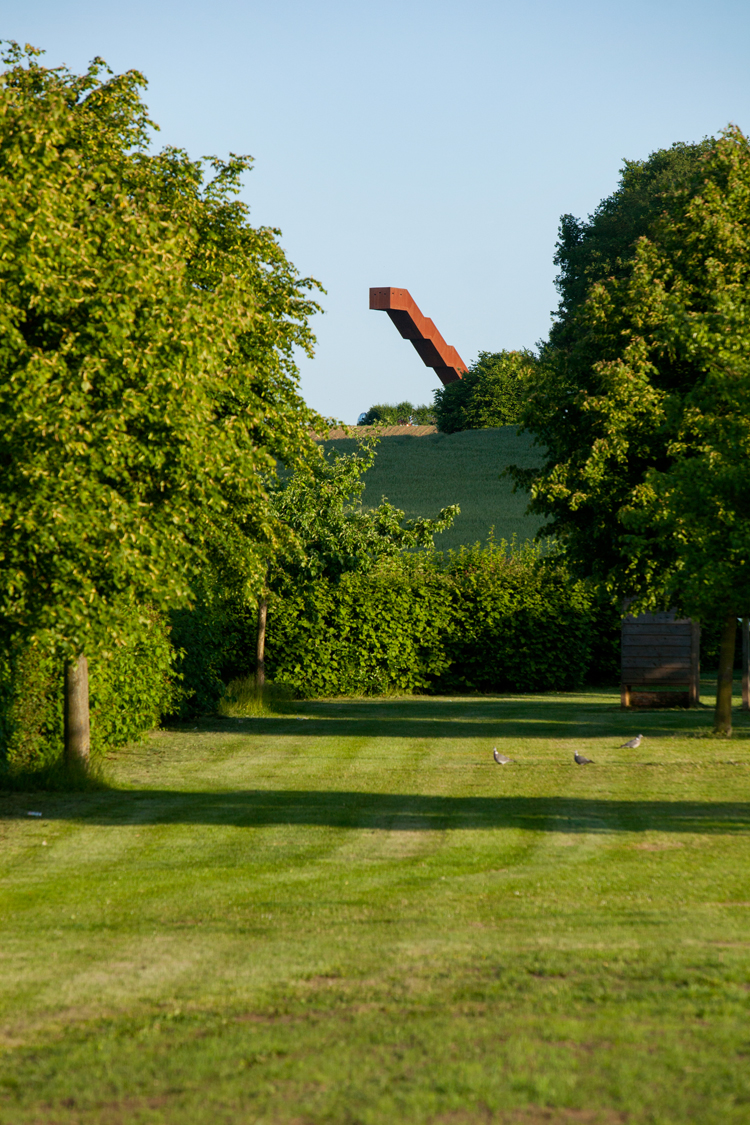 all images courtesy of Close to Bone