Barcelona and Mexico City-based studio Cadaval & Solà-Morales have recently completed Tepoztlan Lounge, the first of a series of cabins to be built over a spectacular site in Tepoztlán, a small paradise located at about 50 km from Mexico City. The town has fantastic weather conditions, and a unique character built thru its pre-Hispanic origins that were followed by a colonial center that is still the heart of the village; its charm attracts the presence of intellectuals and thinkers to stay over the weekend, or for longer periods of time

The bungalow is conceived as a refuge for temporary sojourns in Tepoztlán. In the site there is already an area for common uses, including a large garden with a lounge and a pool which were also designed by our office. The bungalow is designed as part of the same project. A minimal private space for a couple or a small family is the program; however, views, light, nature and quietness are the reason of the project. 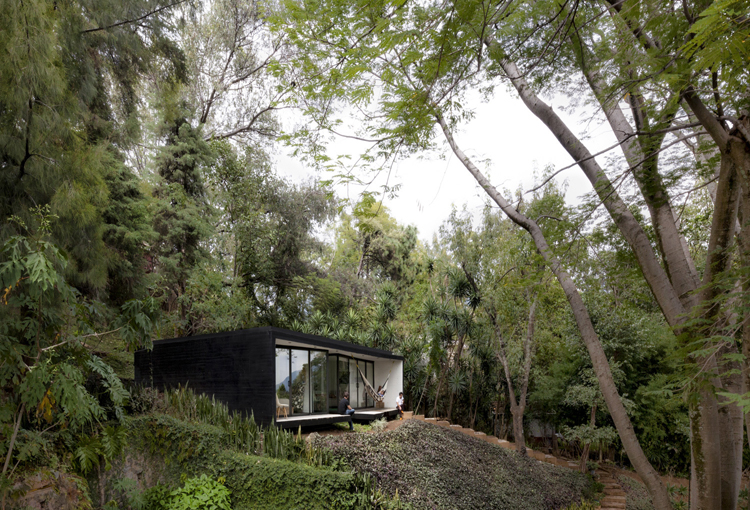 Exposed to the breathtaking views of the valley and the common area of the property, this contemporary cottage is located on a leveled surface already existing within the forest that occupies the site. The building is a small box that hovers over this plain, opening to the views and interacting with the steep slope of the terrain below. It is built on concrete seeking for low maintenance, and with the outer shell painted black to minimize the visual impact on the landscape. It is a framed box with its sides shut to maintain privacy with the succeeding bungalows, but fully open to the frontal views. The project aims to reinforce the belvedere condition in each of its main spaces. 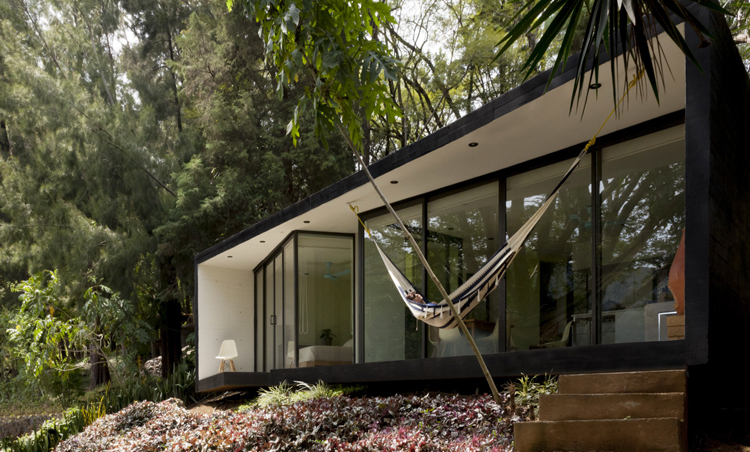 Being a temporary shelter, the project prioritizes both the living area and the master bedroom. Hence, the box brakes down in two at the front to make explicit the separation between those two main frontal spaces, allowing the vegetation to occupy the rift. To strengthen the necessary relationship with nature, these two key spaces have large front terraces that extend their experience and approach to the edge of the natural platform on which the bungalow stands. The cabin is a small plinth, a shelter among the trees to enjoy the views, the weather and the exuberant nature of the place. 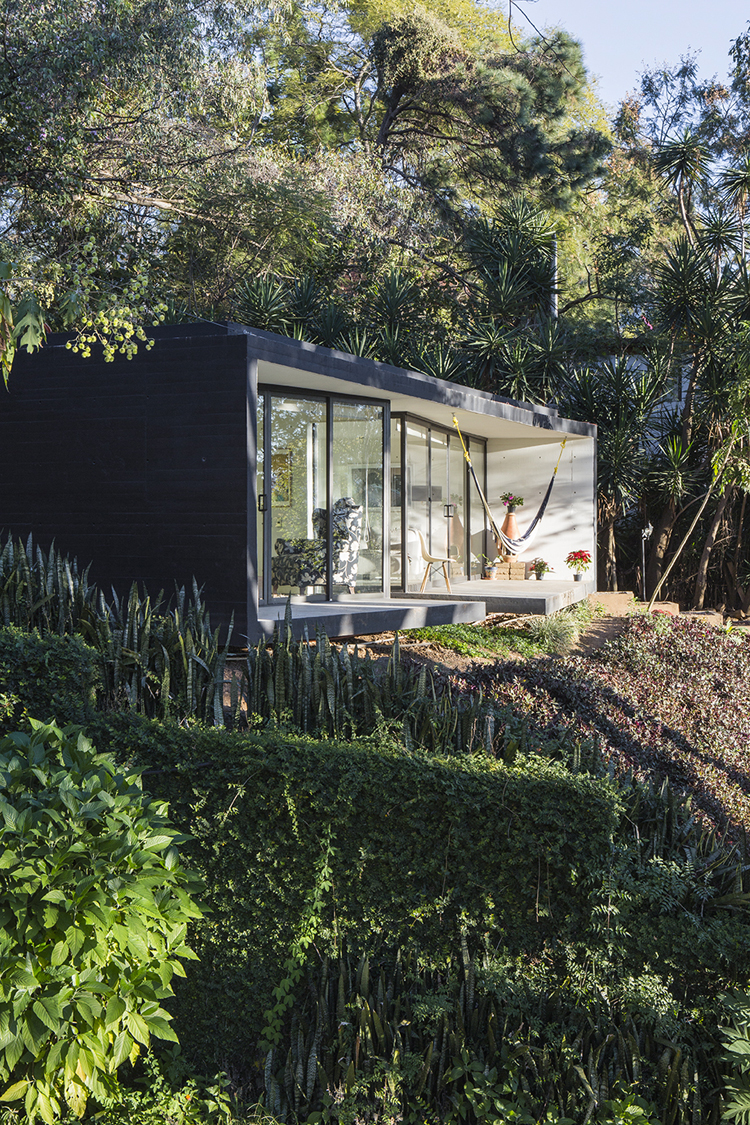 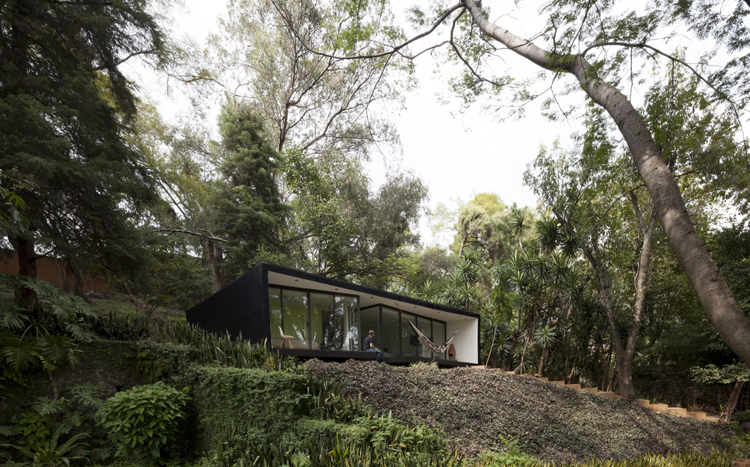 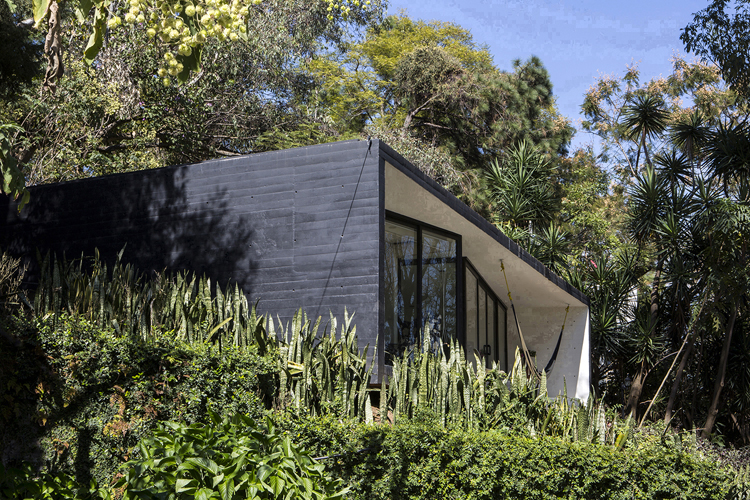 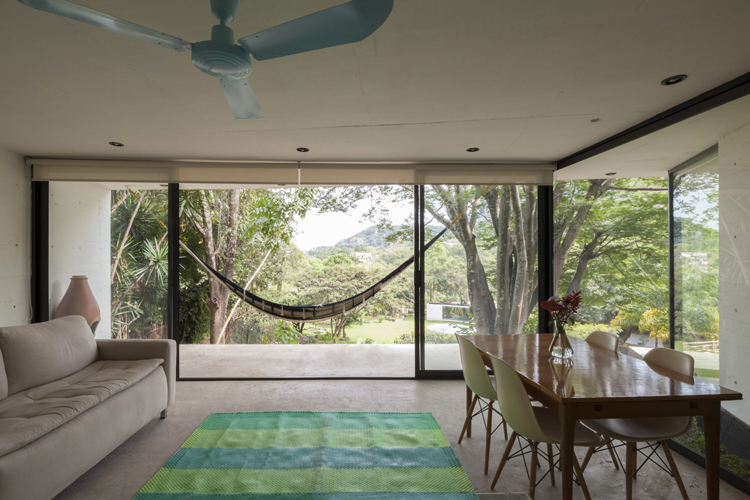 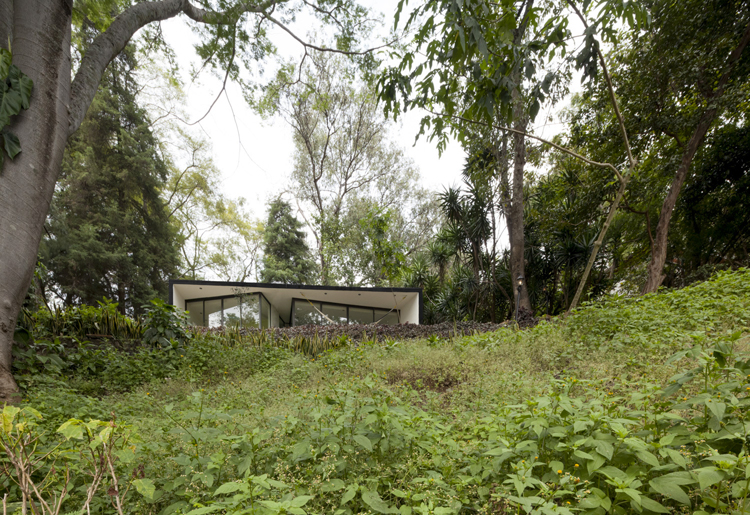 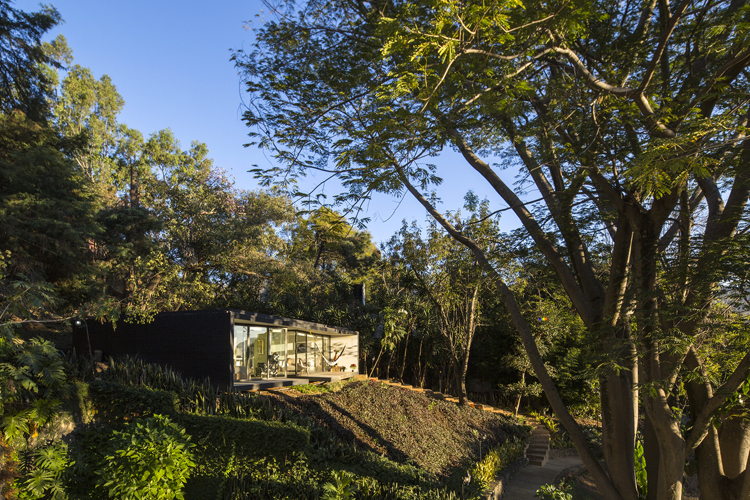 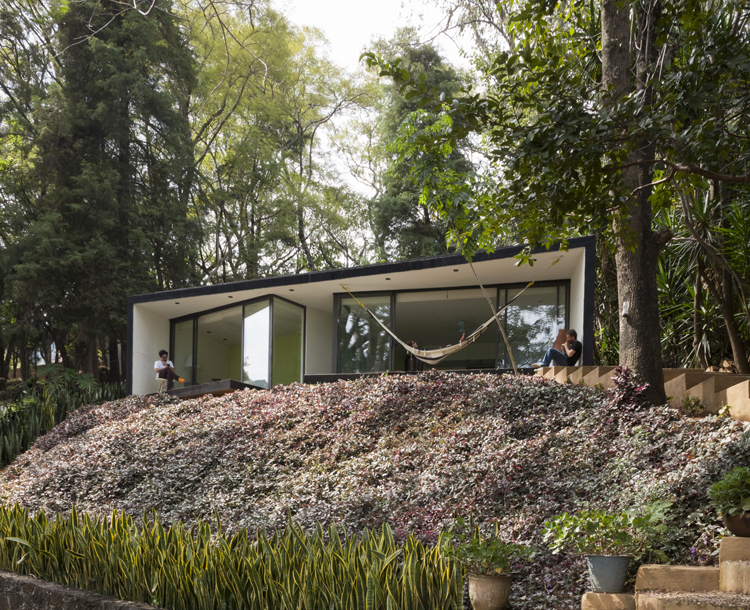 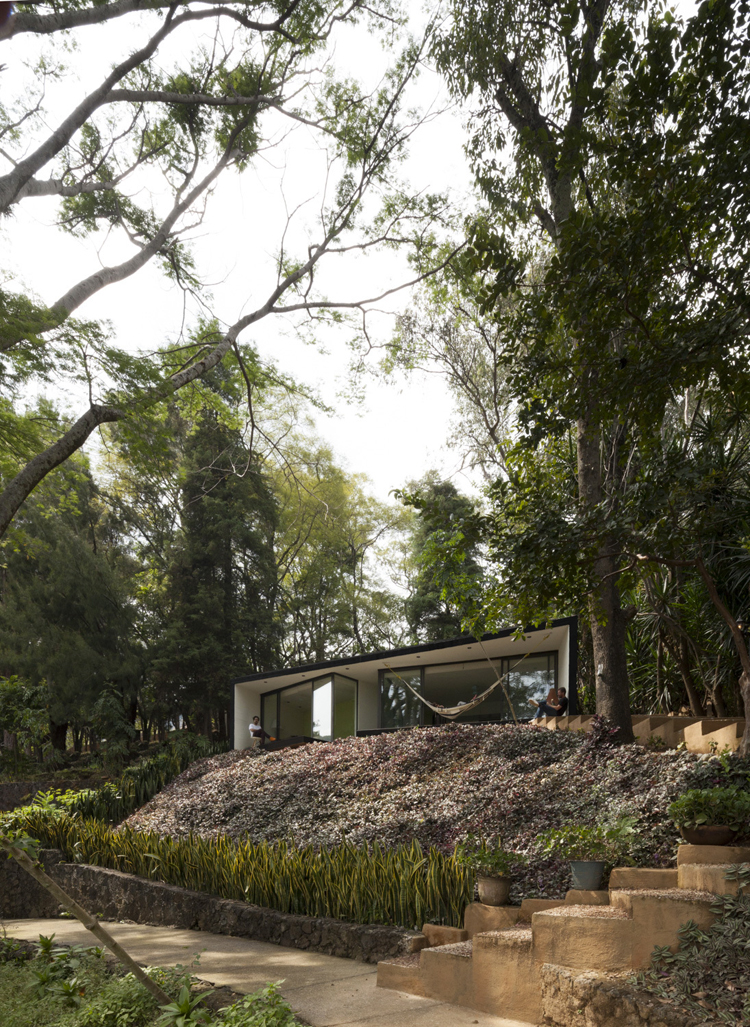 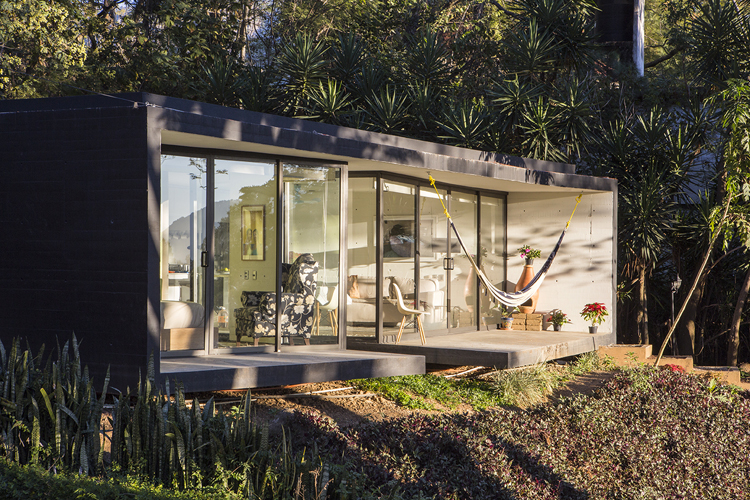 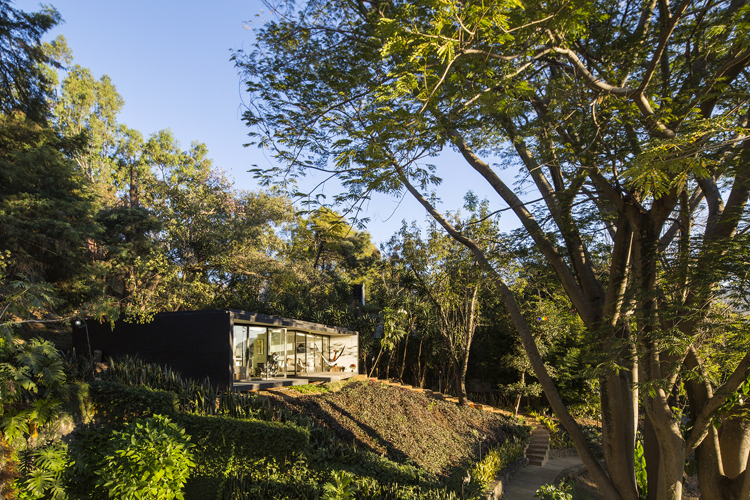 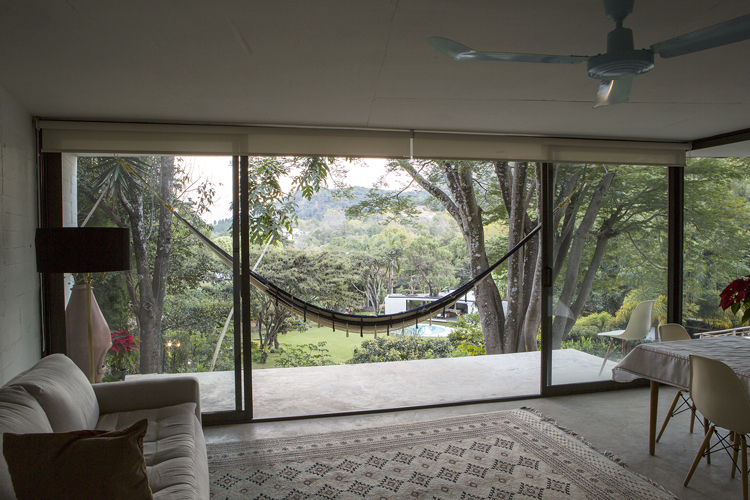 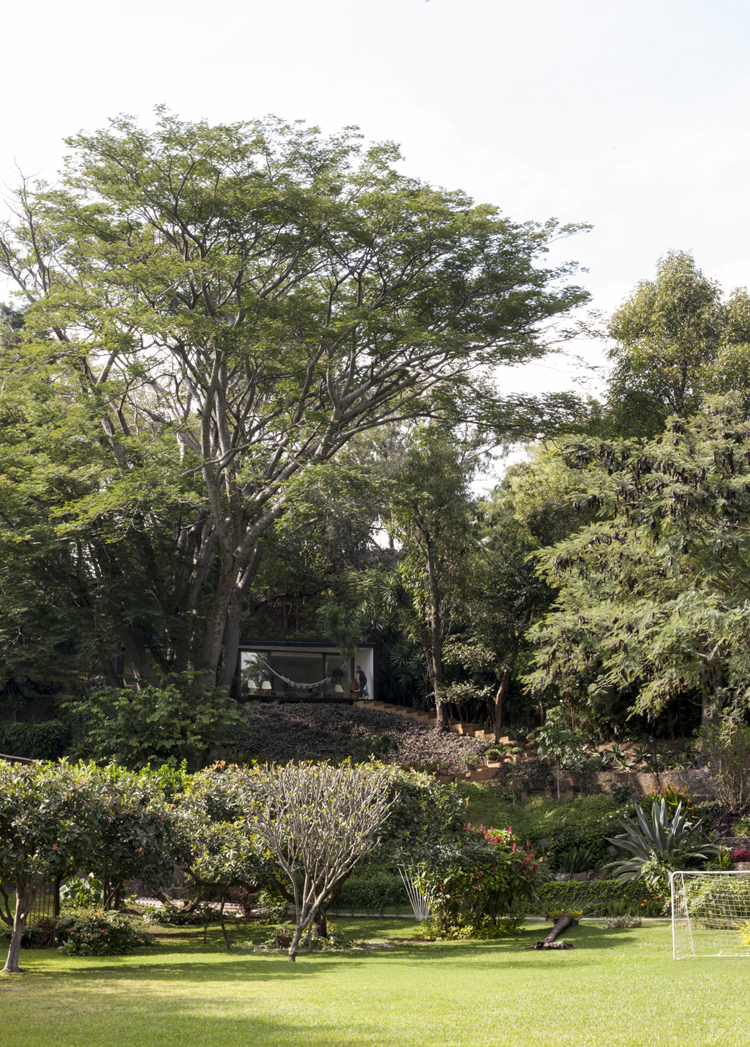