Oriol Garcia has recently renovated this 45 sqm apartment, located in the roof space of a three-storey building in Barcelona’s Sant Andreu neighbourhood. The initial space had almost no natural light and was over compartmentalized because of the requirements of previous residents. Despite this, soon various spatial virtues and elements with a lot of potential were identified and considered deserving of a new role. First of all, a sunroom at the interior end of the apartment that opens to the building’s service courtyard and has the floor level underneath the level of the rest of the space, great area to serve as the main source of natural light. At the other side of the apartment, on the wall where the access door is located, we find a window that overlooks a small rooftop terrace, which visually connects and brings in the treetops from the street from which we enter the building. 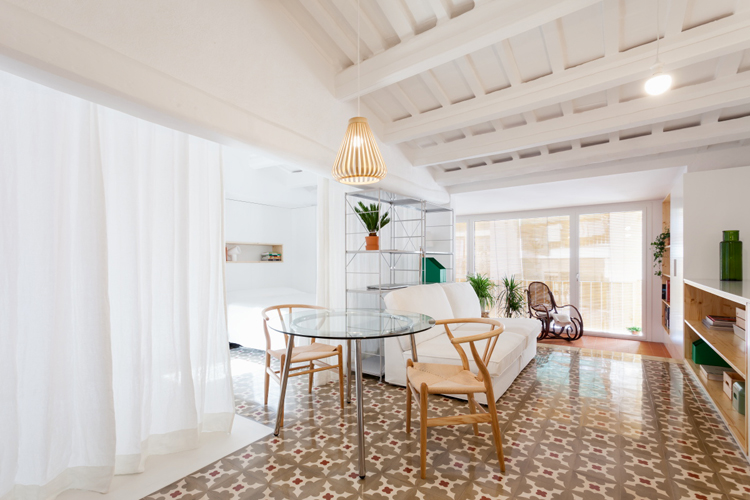 Also, hydraulic floor tiles were found in the interior rooms, as well as ceramic tiles in the gallery. They were both in bad shape, but with very good chances of being recovered and restored, which was important because of the good quality of the materials and their value as part of the architectural history of the place. Finally, the uncovering of the rooftop’s structure that will play a crucial roll in enhancing its spatial quality, providing a sense of a broader space and bringing order to the new areas. 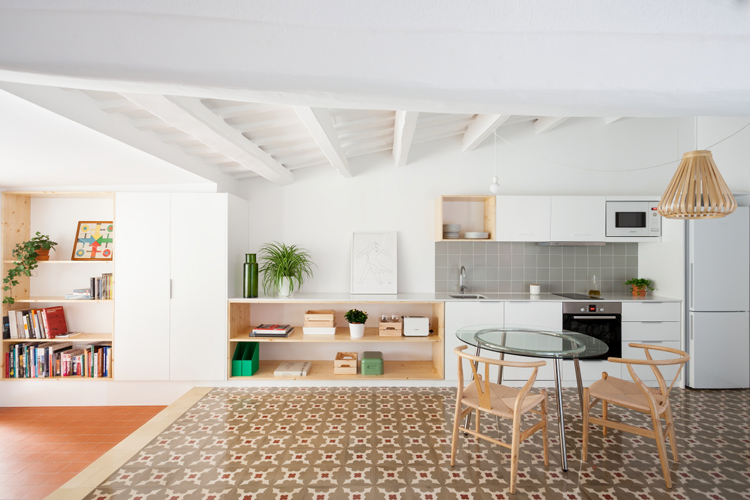 The main goal of this project is clear: it needed much more natural light and a greater breadth of space. The solution was also crystal clear. All the interior walls that served as light barriers were taken down, and all the fixed elements such as, kitchen, bathroom, and closets were mounted up at the lateral perimeter walls with a total height of 2.10 meters, leaving the center open area free of visual obstacles. The false ceiling that hid the structure of wooden beams holding the rooftop was also removed. The headroom between the floor and the false ceiling which was 2.20 meters throughout the house, increased to 3,30 meters at its highest point. The removal of what isn’t needed enhances the rich qualities of that which went unnoticed. With these solutions, the apartment can now benefit much more from its existing windows. The hydraulic pavement and the rooftop’s structure are beautifully illuminated through the existing openings that go uninterrupted, from one side of the space to the other. 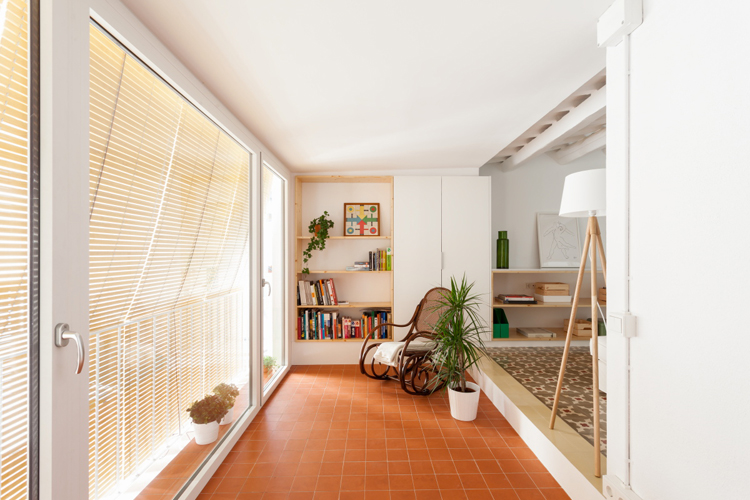 As for zoning, two distinct areas are created. One houses the kitchen-dinning area and living room: the public space. In the other one we find the more intimate areas: the master bedroom and the bathroom. The limit between these two areas is defined and accentuated by a preexisting structural element that becomes very relevant once the false ceiling was removed. This element is a wooden girder that divides the total span that the rooftop’s supporting beams have to cover into two. Two physical elements underneath the girder, that provide privacy and separate both areas are white curtains and a metal bookcase or shelves. The lightness of these elements emphasize the dominant spatial roll of the preexistent rooftop’s structure in the conception of space, and in turn allow the perception or the use of the space as a whole, when users or activities require it. And last but not least, the sunroom, which had had so little prominence in the past; it is now merged into the main areas by removing the wall that separated them. This space is now a part and can be appreciable from any point of the house. 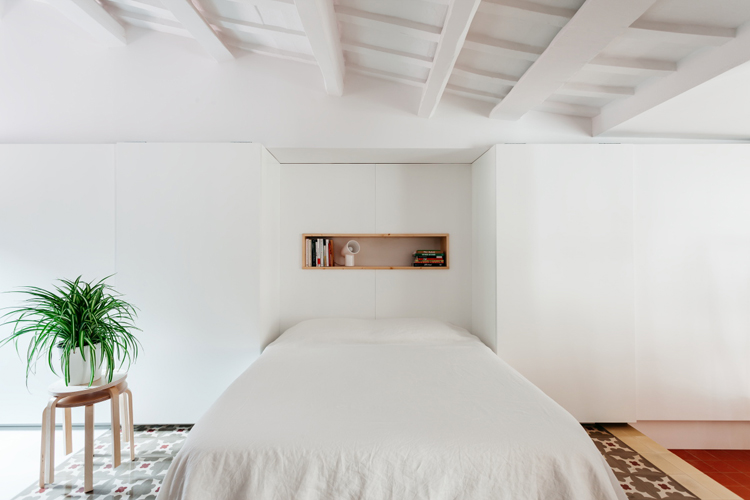 The final result is almost loft-like because of the open space capabilities, but with light, mobile, and longitudinal dividing elements that allow privacy and flexibility to the different areas without turning into light barriers, always allowing the free passing of light all across the apartment. 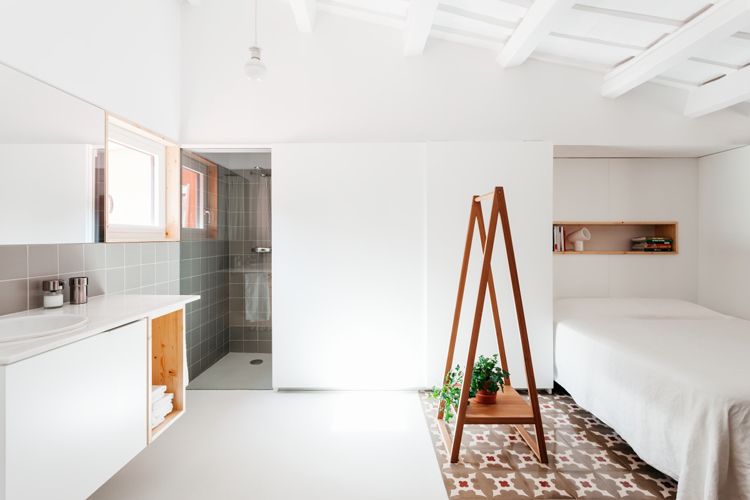 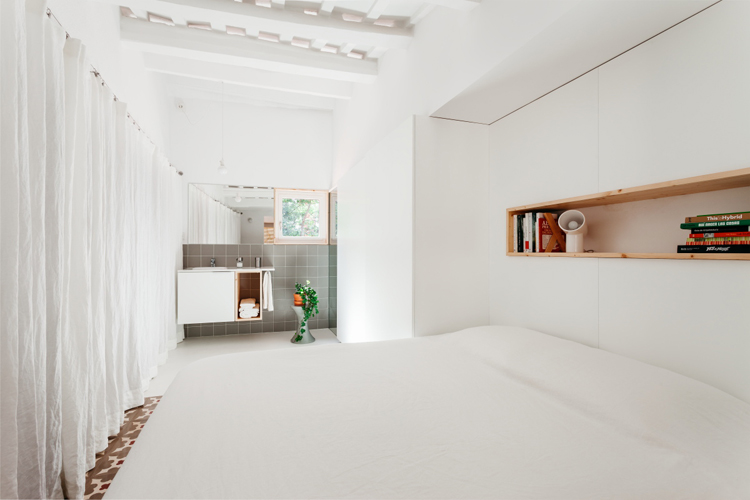 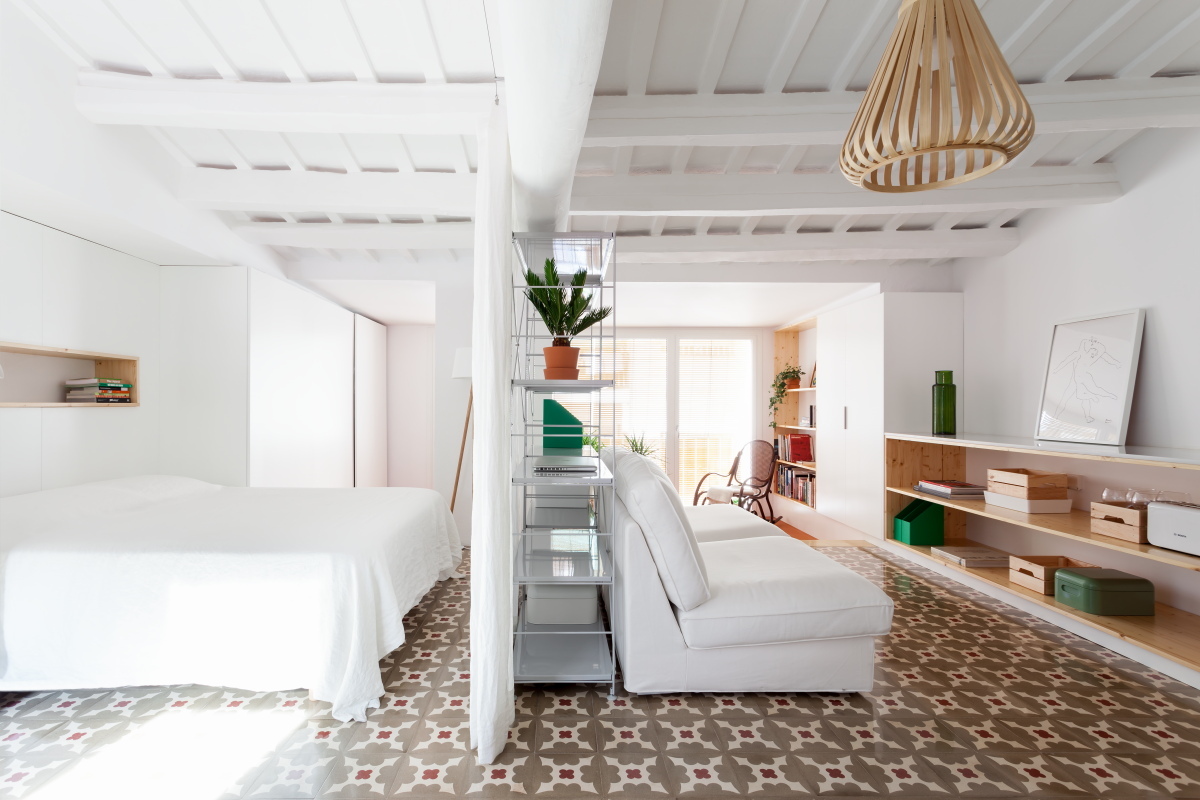