Spanish studio El Equipo Creativo filled with thousands of hanging flowers the interior of the Bellavista del Jardín del Norte restaurant in the Barcelona’s Eixample district. Based on the premise of ´your home away from home´ the interior design references the idea of daily life and festive spirit of small villages in Spain, but also all around the world. The name, meaning Beautiful View of the Garden in the North, references to the large garden at the end of the restaurant. This garden is a surprising oasis in the center of Barcelona and inspired the name of the restaurant as if it related to a name of a small town. 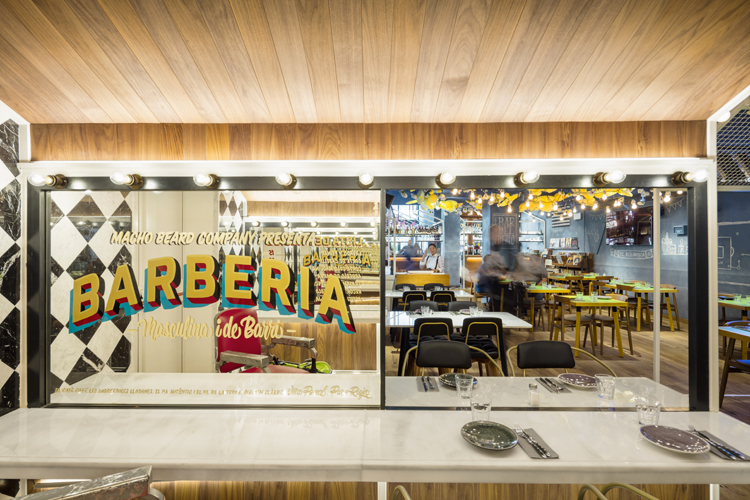 Different elements in the form of metal kiosks guide guests through the space until they reach the large garden located at the end of the space. These elements are an abstraction of the festive elements in village towns: a street adorned by a ceiling of flowers and lights that accompanies you to the plaza. This plaza overlooking the garden becomes the icing on the cake as it hosts an open space underneath a sky of fireworks. The final result of the design creates a sensation of a familiar setting for many Spanish people: going back home for the yearly village feast and enjoying homemade food. Each corner is as surprising as it is familiar. 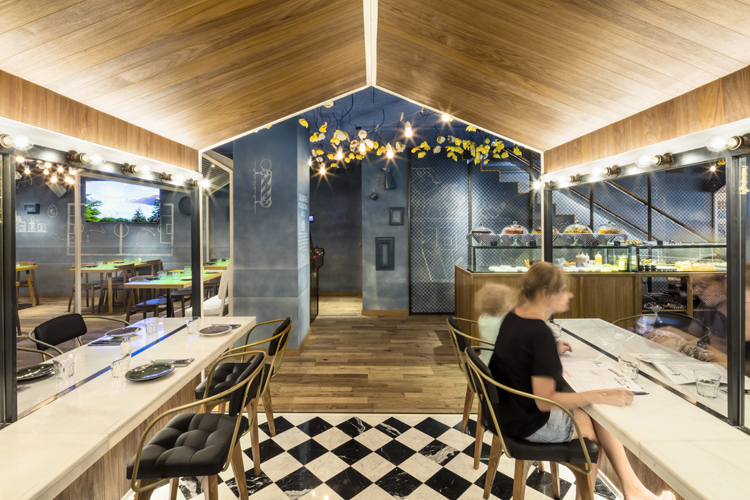 Despite the size of the space of 1000 sqm, the goal was to create a functional yet intimate space. The place is divided into two floors, both facing the street on one side and the garden on the other side. The ground floor has a variable width, after the generous entrance the space becomes narrow in the middle, like a prelude that precedes the lavish garden at the back. This spatial experience is integrated into the concept, unifying the entrance and the middle zone in a sort of stroll through the village towards the plaza. 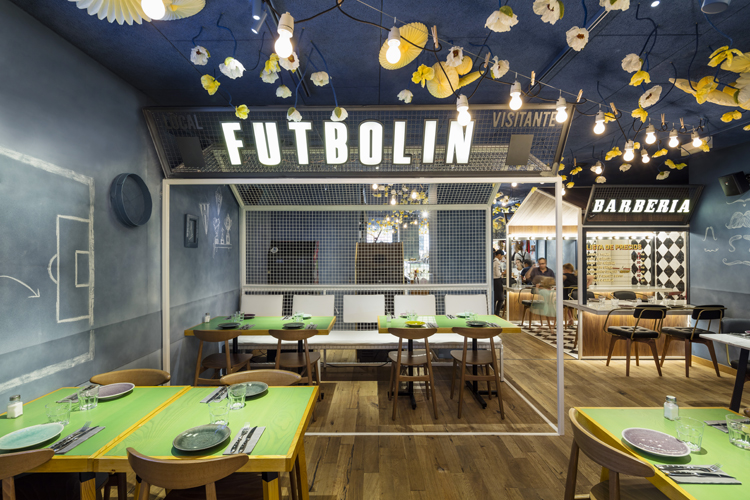 We begin the journey through the village at the florist, surrounded by flowers and plants. Here we are met by the village street in which metallic stall frames and letter signs form a grocery and a newsstand. Moving further in we see the cake shop with grandmothers´ cakes, sweets and ice cream. Further on we can choose to have a seat at the barbershop, local pub or watch the chefs cook in the tombola. We finally arrive at the plaza, where the challenge was to give human scale to this double-height space without losing its majesty. 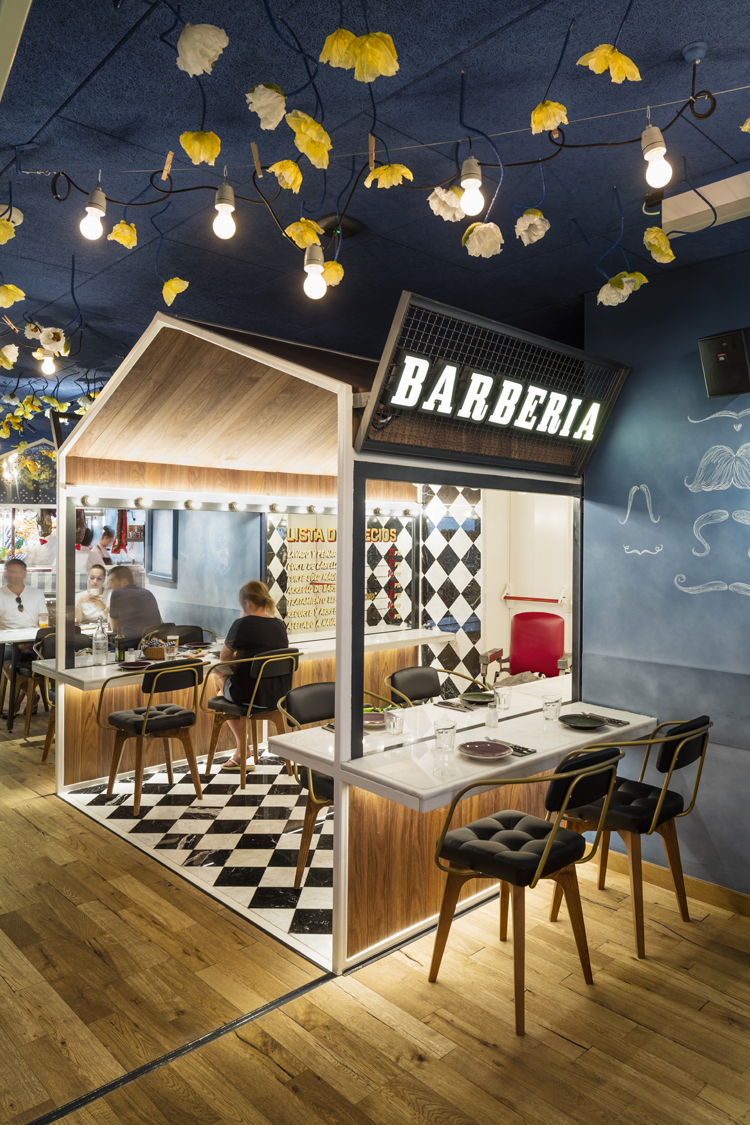 The church borders this central zone and is composed of a structure adorned with festive purple flags. Surrounding the central area is a perimeter of balconies covered with beaded curtains which add depth to the space. The second floor has views to both directions and contains more private areas. On one side the event rooms receive the light from the street sifted through the flower stalks of the entrance. Its wallpaper-lined walls reproduce the floral spirit of the exterior while ensuring the acoustic comfort. The space is made flexible by means of retractable dividers that split the space into two. At the other end the reserved seating area is situated, four areas of different sizes are separated by sliding screens adjustable to the guest´s needs. These curtain screens are composed of black and white beads recreating the shadows drawn on the curtains of village windows. The reserved spaces are still connected to the plaza thanks to the open balconies. 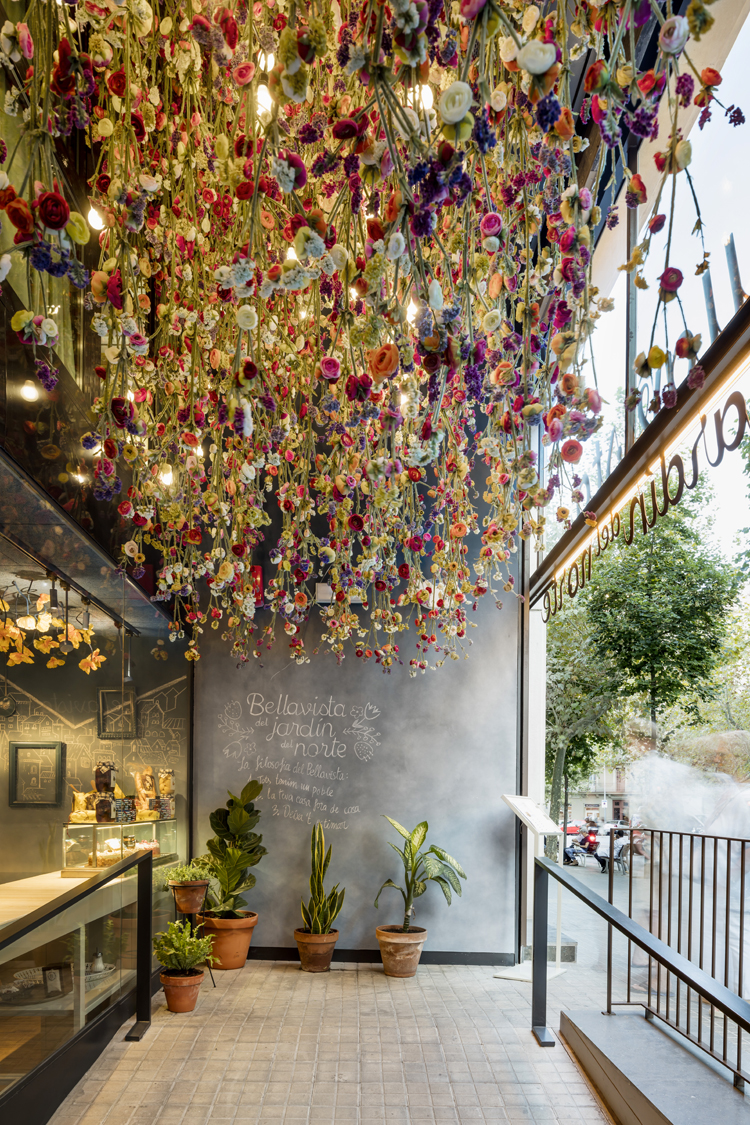 The lighting is done in collaboration with the BMLD lighting design team. The idea was to create a lighting installation that accompanies the concept of a walk through a village and the grand finale in the final open space. Strings of light bulbs are held up by tensioning cables from the ceiling to accompany the guest from the entrance all the way up to the plaza. In the plaza, the grand finale is the explosion of  “fireworks”. 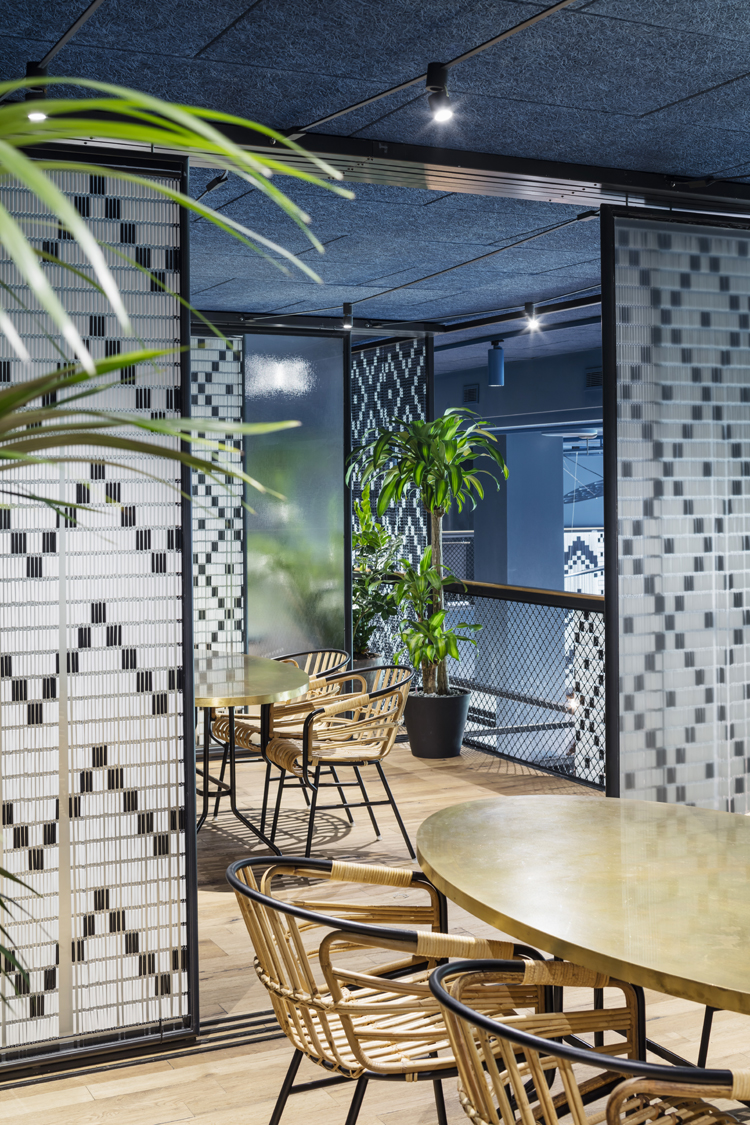 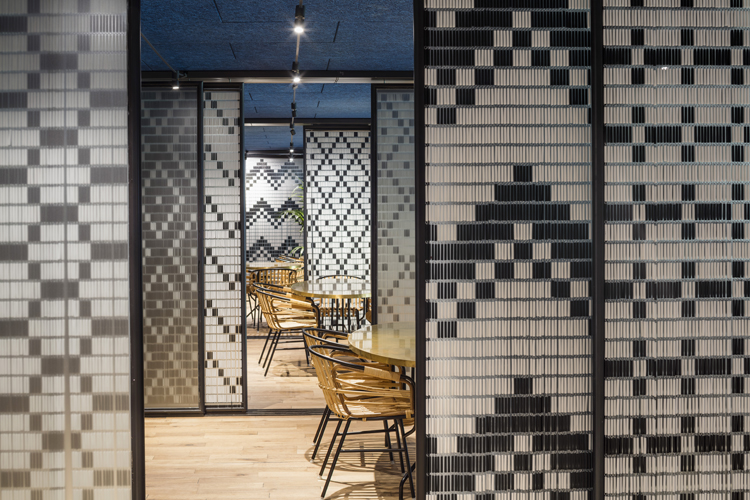 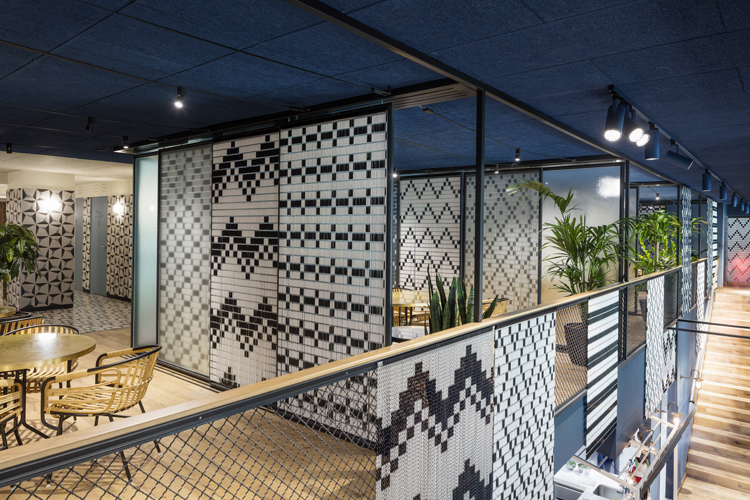 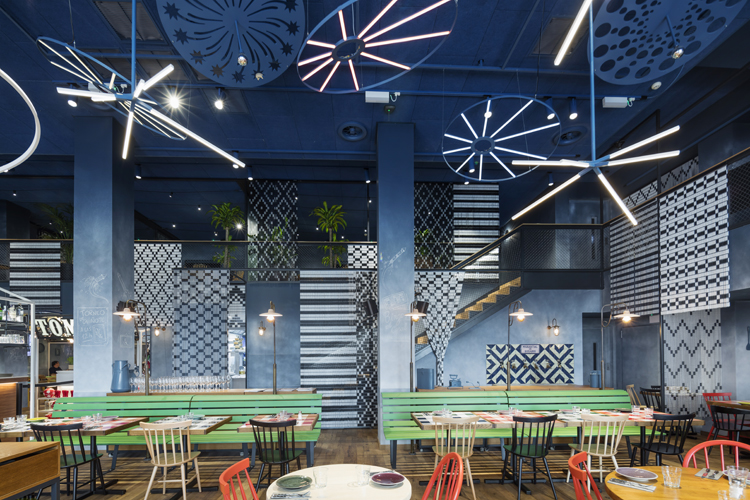 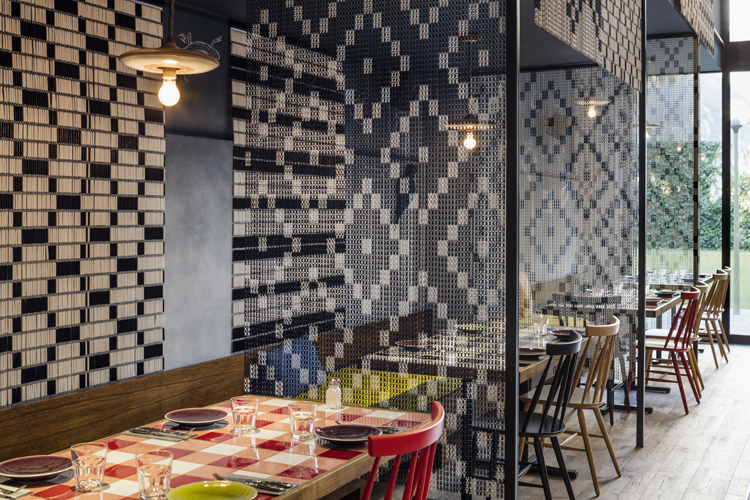 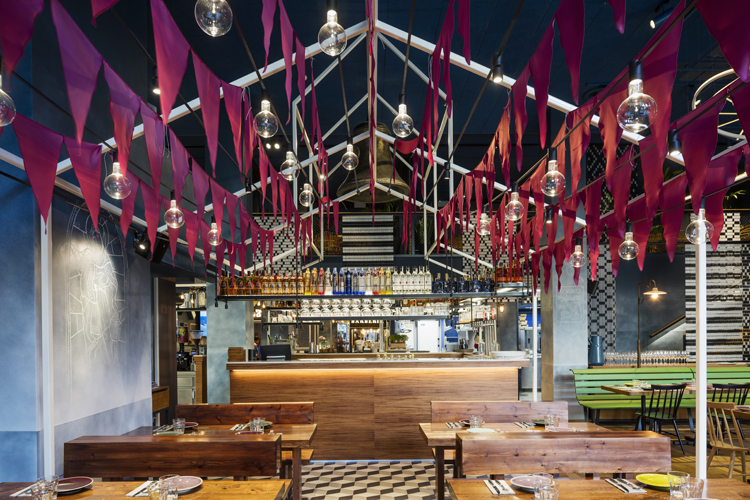 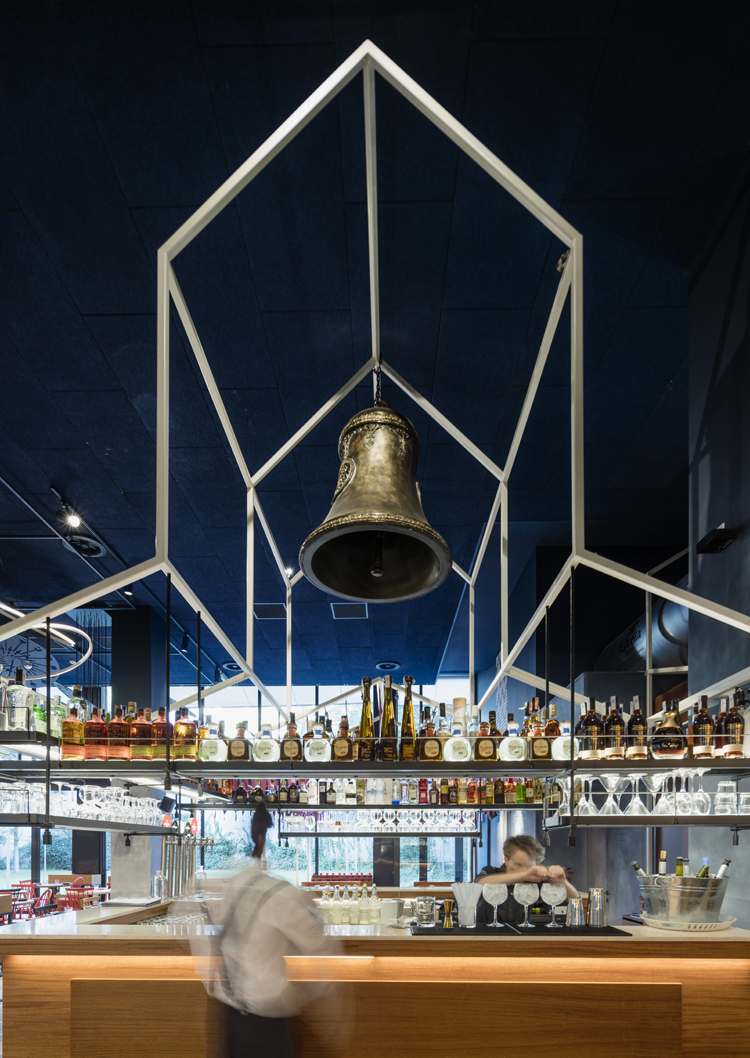 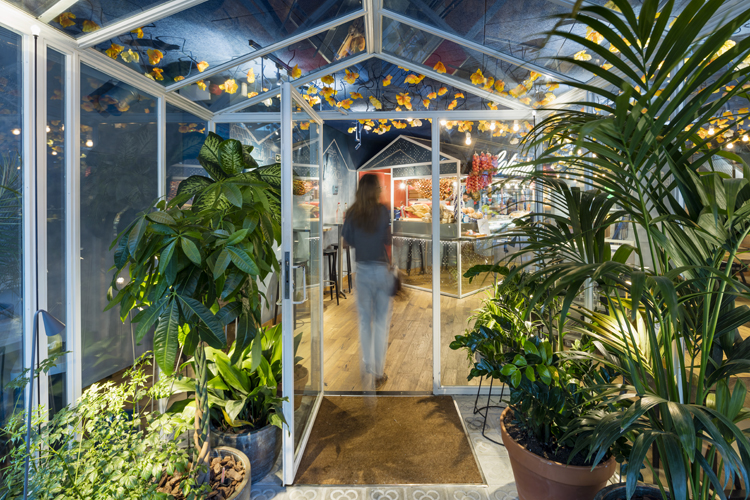 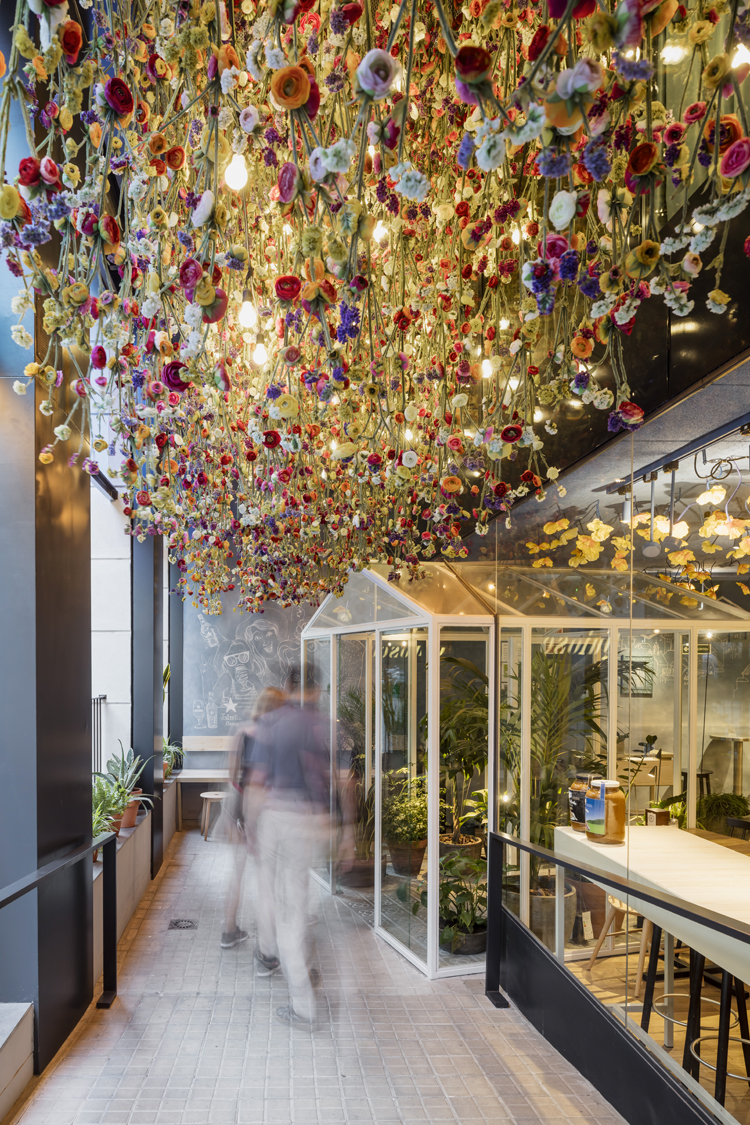 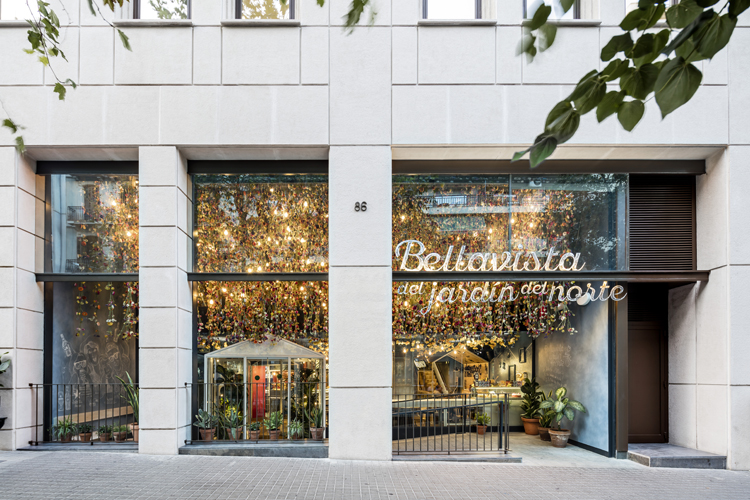 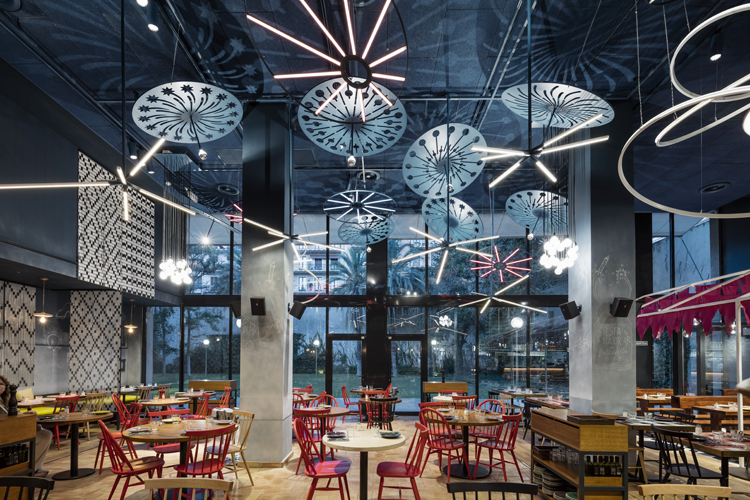 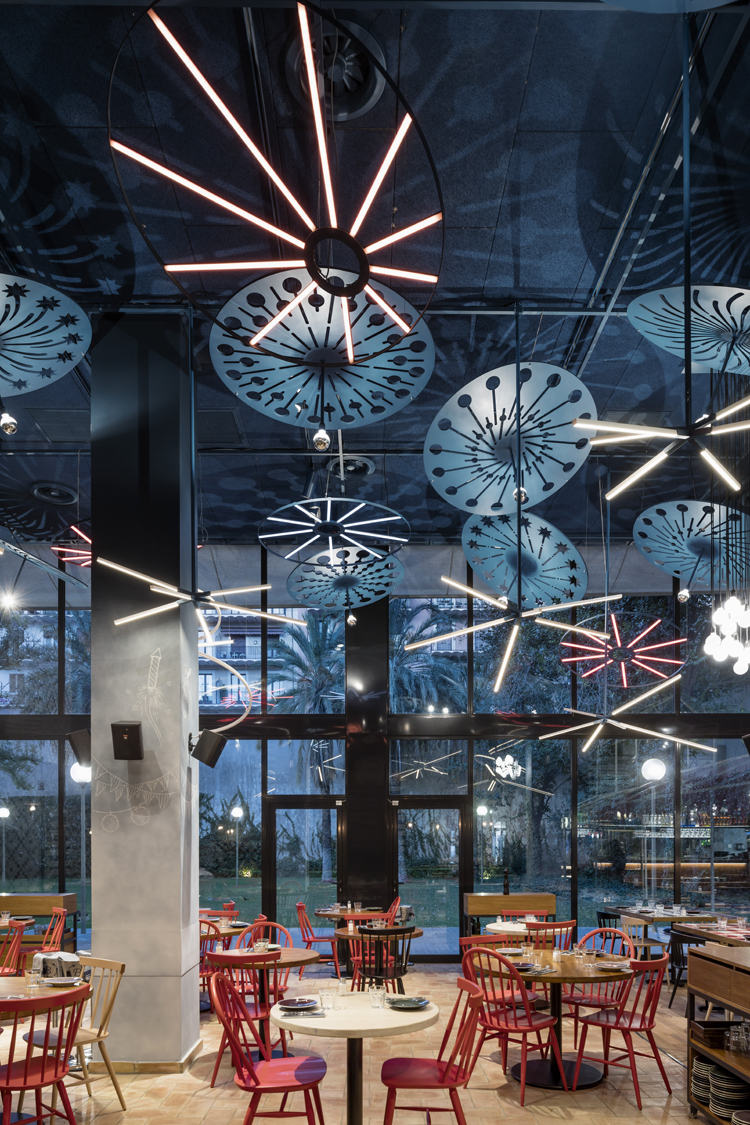 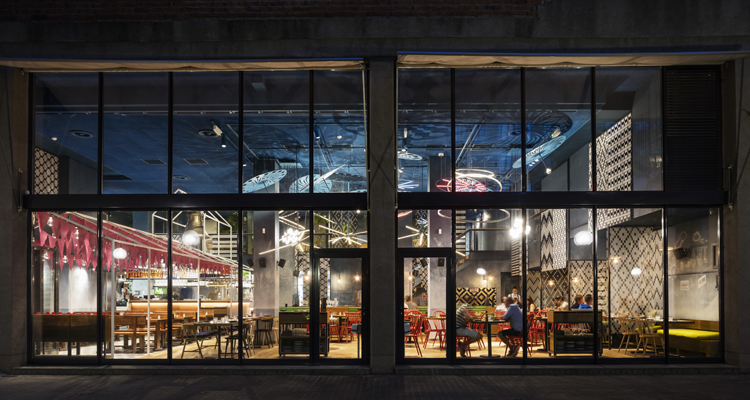 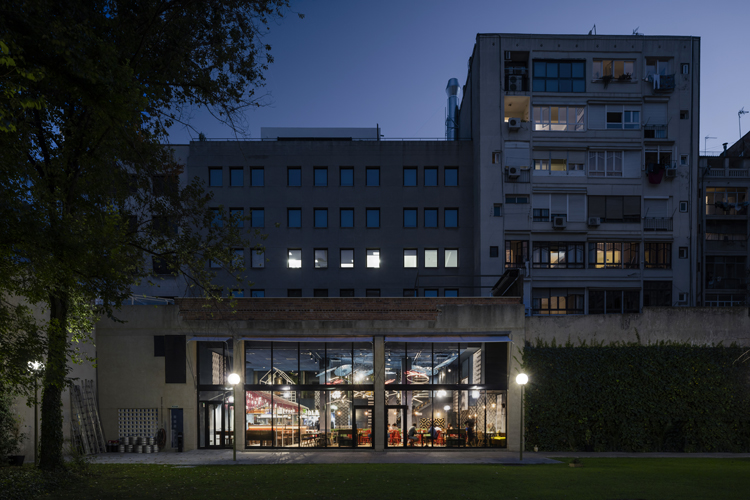 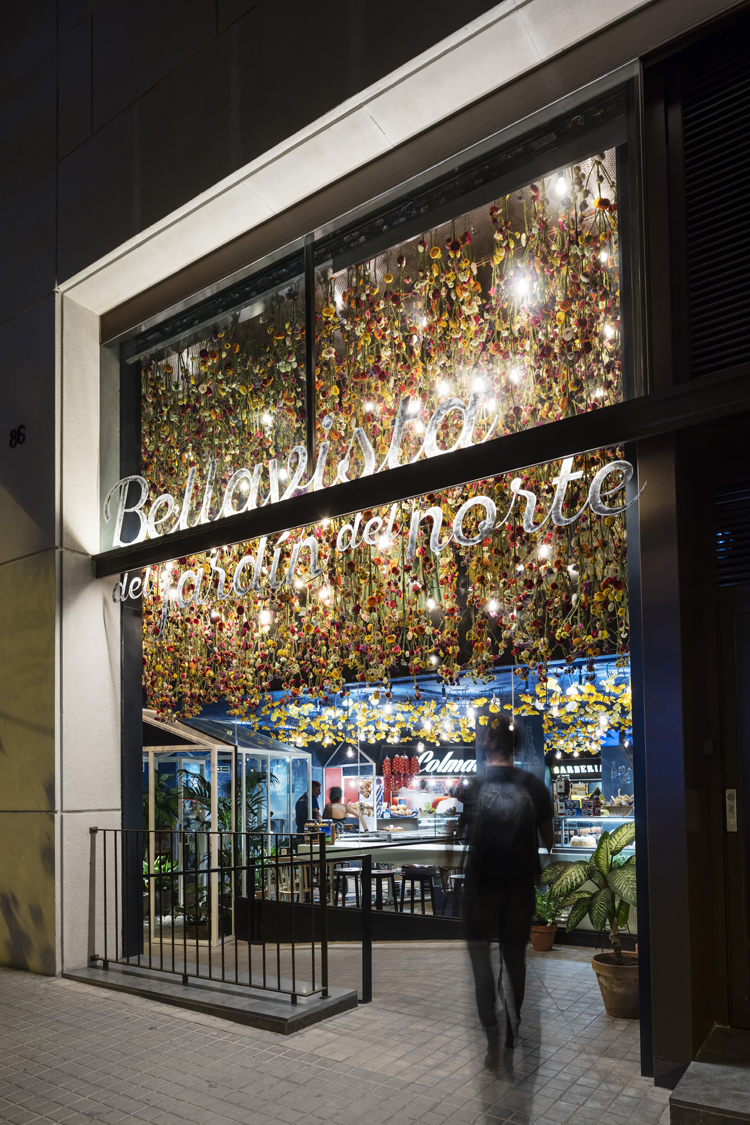 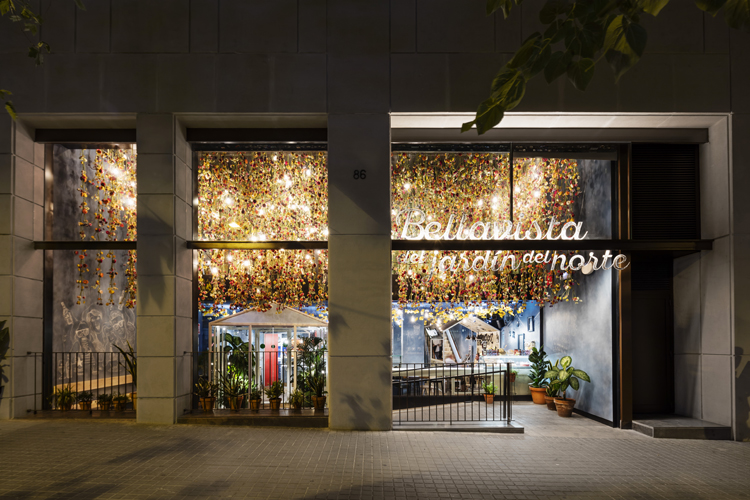 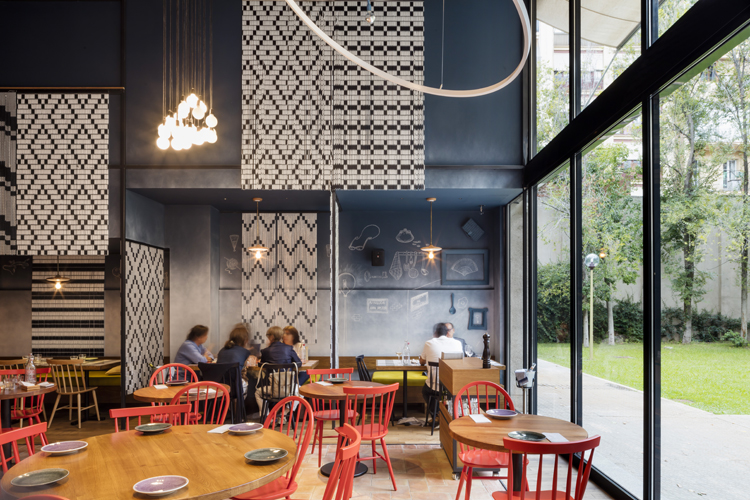 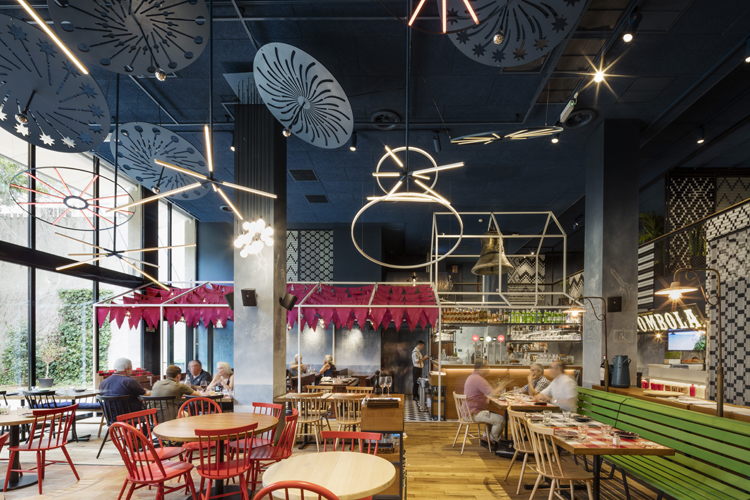 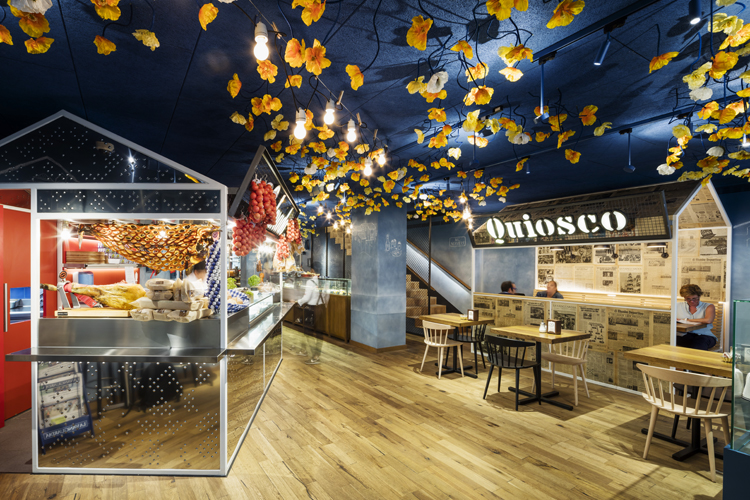