Canadian architecture firm Audax has recently designed a modern addition to a 116-year-old home in a  picturesque neighbourhood in Toronto. “Bilateral house is characterized by its two unique façades. The main façade is heritage while the rear is distinctly modern. At first glance, each side appears to be different, however upon a closer look you begin to understand how they are related,” says Gianpiero Pugliese, Principal of Audax.

The homeowners of Bilateral House are a married couple with three girls. As avid collectors of contemporary art and vintage furniture and décor items, they wanted to build a modern gallery-inspired home with high ceilings to display their collections artfully. However shortly after purchasing their property, the house was designated as Heritage and could not be demolished.

Responding to the homeowners’ vision and the City’s requirement to keep the front half of the original house, Audax sensitively restored and rebuilt the heritage façade and designed a modern addition in the rear. However, the design solution ensured that both sides of the house still related to each other. 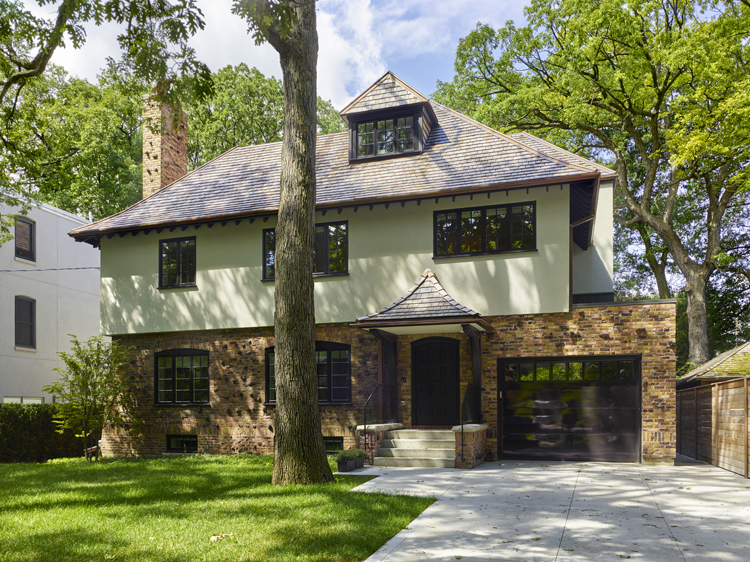 To begin, Audax faithfully reconstructed the main façade with restored brick, new stucco and wood trim. Audax also rebuilt the roof to mirror the original design. The main façade materials were then used to clad the new addition on the rear. Black metal was introduced as a new material on both sides of the house to contemporize the look, and to help further tie both façades together. 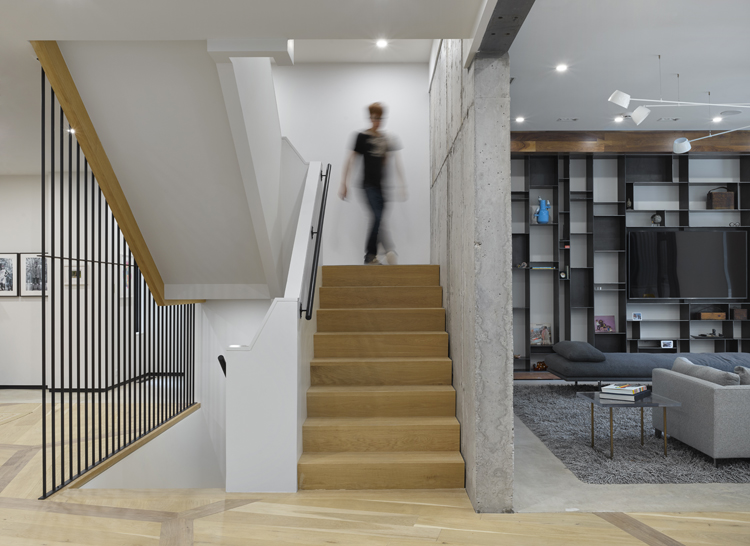 The original house featured traditional residential windows with mullions and low ceiling heights, which were restored and maintained. On the contrary, the modern addition was designed with expansive floor-to-ceiling windows and high ceilings. To ensure a seamless stitching of old and new portions, the roofline of the addition was strategically positioned to not overwhelm the existing roofline. Audax also reused the brick from the demolished part of the house in the rear, to build a new integrated garage on the main façade. 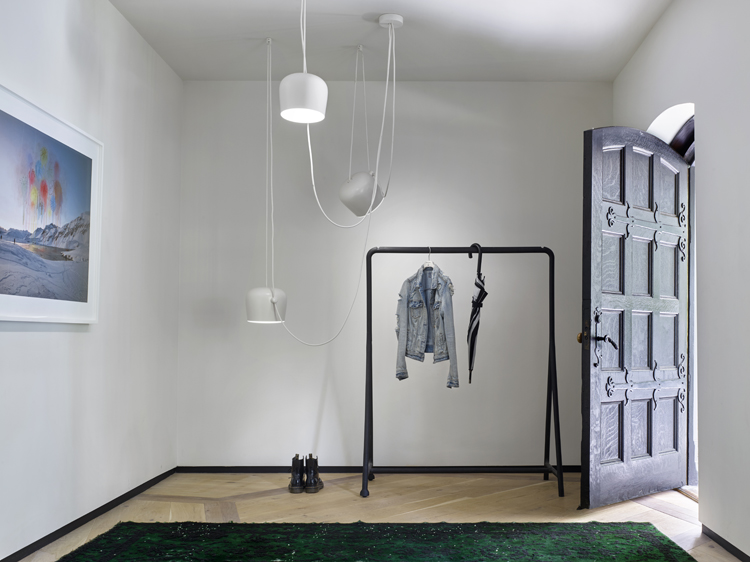 Using traditional principles of architecture, Audax designed the rear façade with a balanced composition by framing the modern glass windows with metal wrapping and using the stucco on opposite ends. The new expansive windows were carefully placed to optimize views of the backyard with some of Toronto’s oldest trees. The design also incorporated a peaked roof with a gable end to pay homage to the traditional architecture of the neighbouring homes. 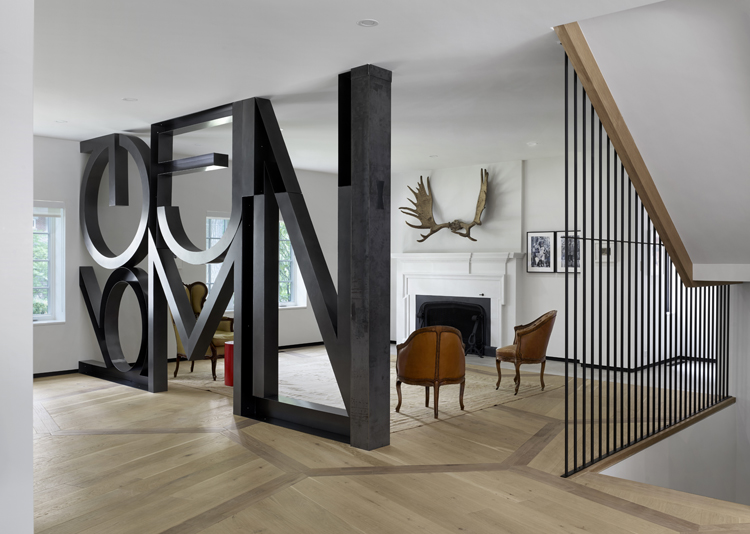 The interior design strategy followed suit with a design that both honoured the original character of the house and satisfied the homeowners’ affinity for a modern gallery aesthetic. To achieve this duality, Audax integrated old and new elements throughout both portions of the home. For example, the traditional wood flooring in the heritage portion of the house is extended into the modern addition through the centre axis of the house, but is then contrasted with contemporary polished concrete flooring on either side. 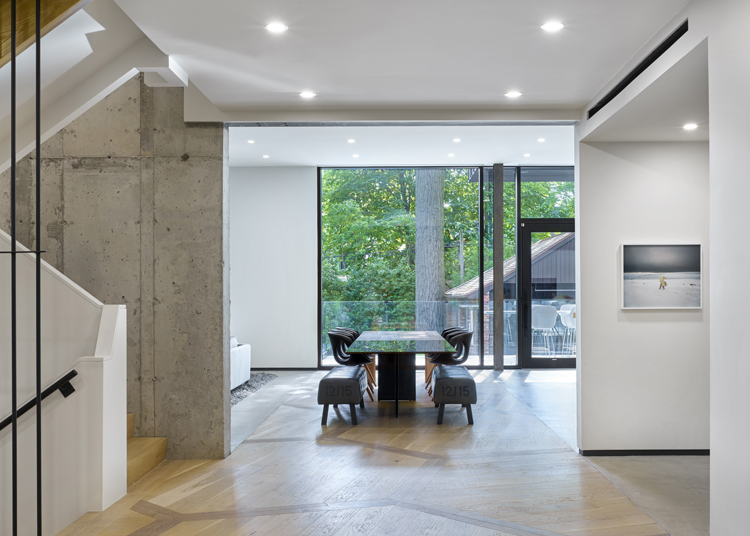 Similar juxtapositions of raw and rough materials with refined and smooth materials are overtly expressed throughout the home. The main staircase is placed at the intersection where the old and new portions of the building meet, and also features a mix of rough materials and finer materials. An exposed concrete wall with a steel beam is left unfinished, to contribute to the home’s loft-like gallery feeling, and to artfully highlight the exact location of where both halves of the house are stitched together. 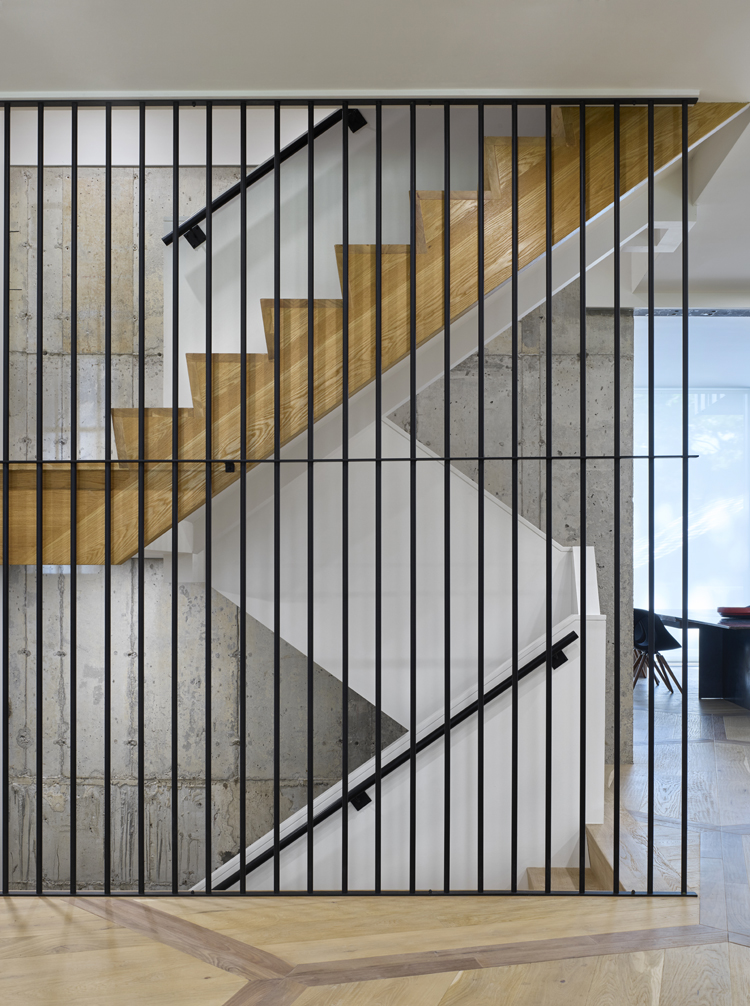 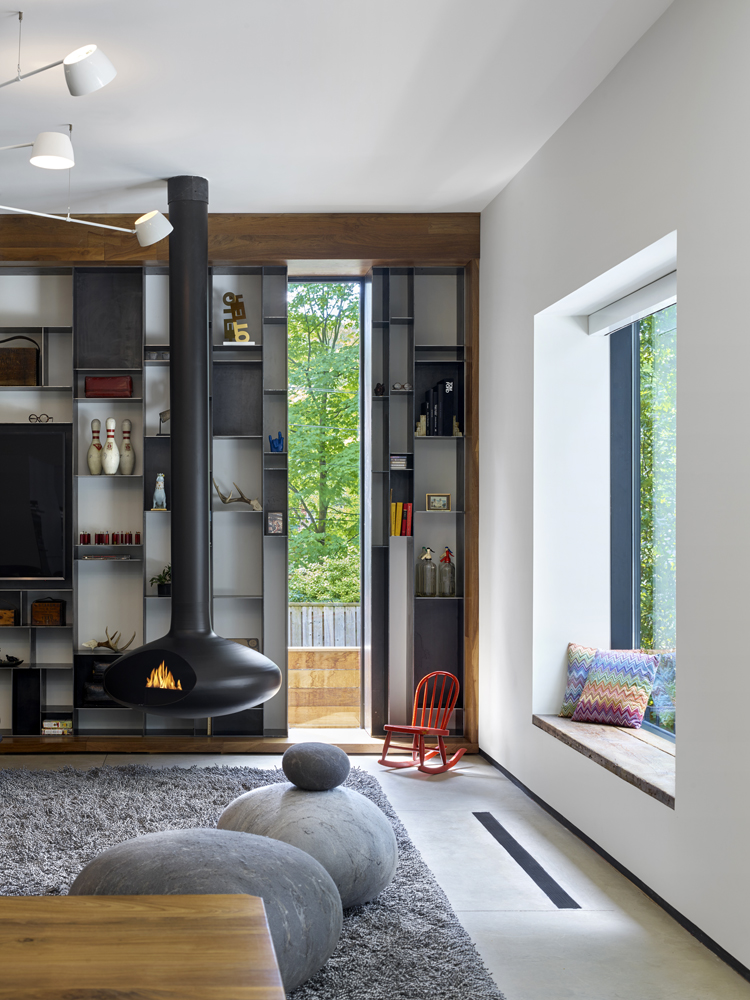 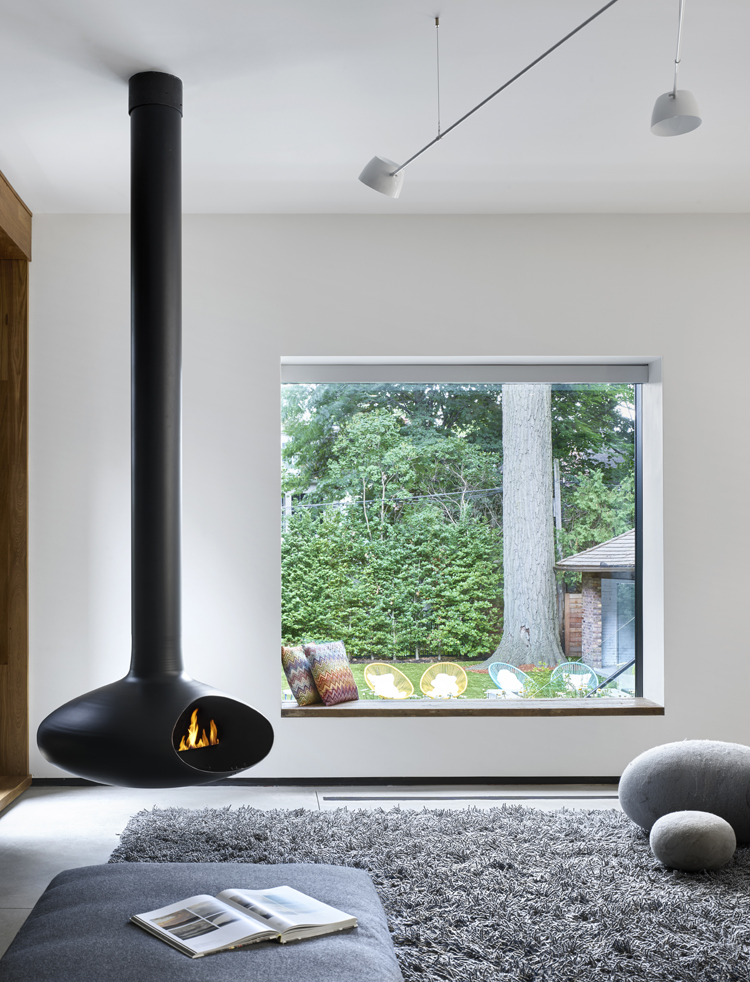 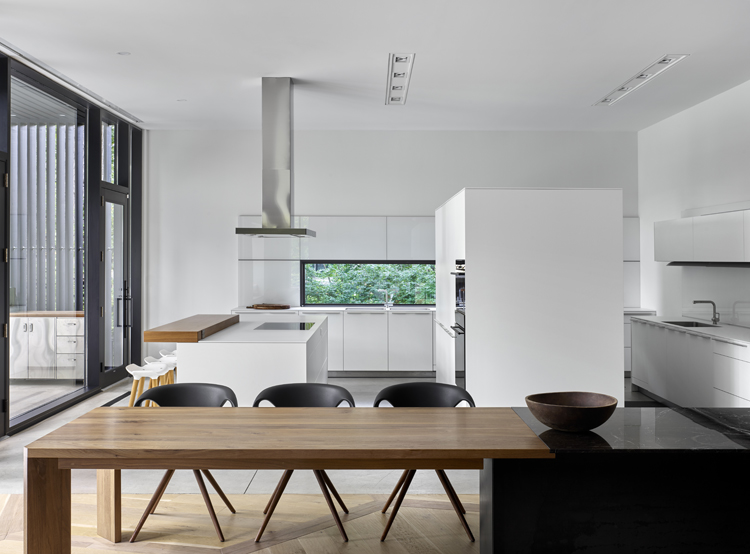 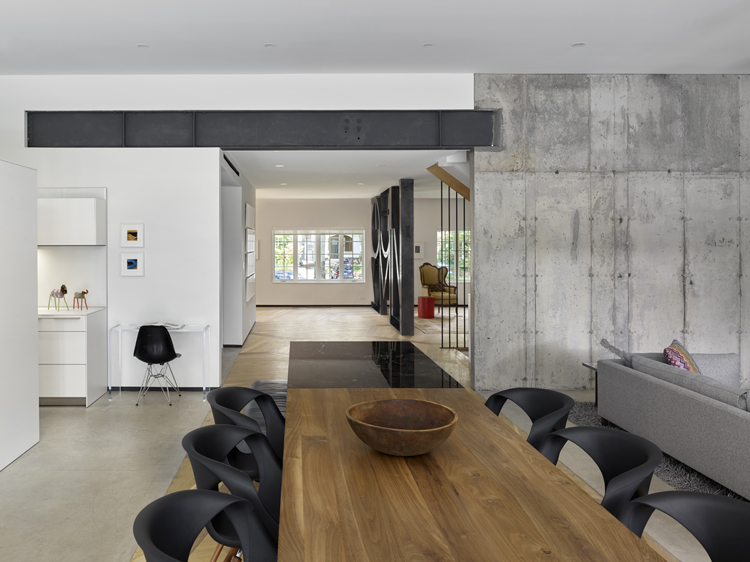 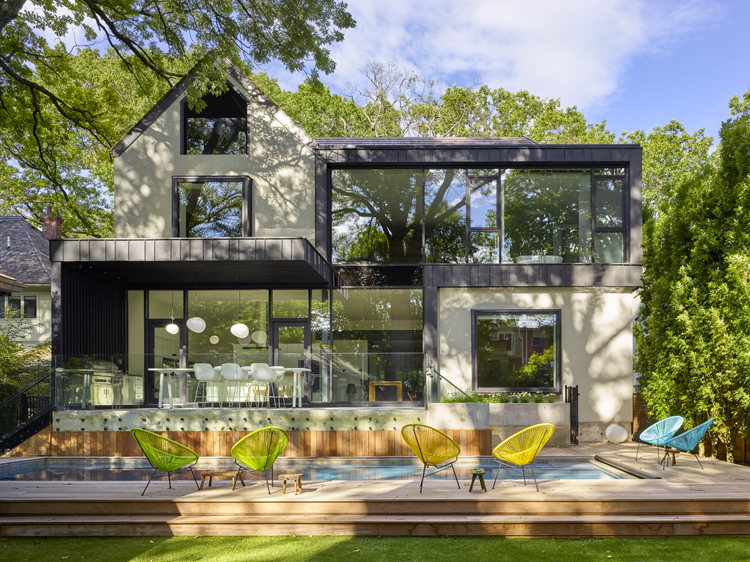 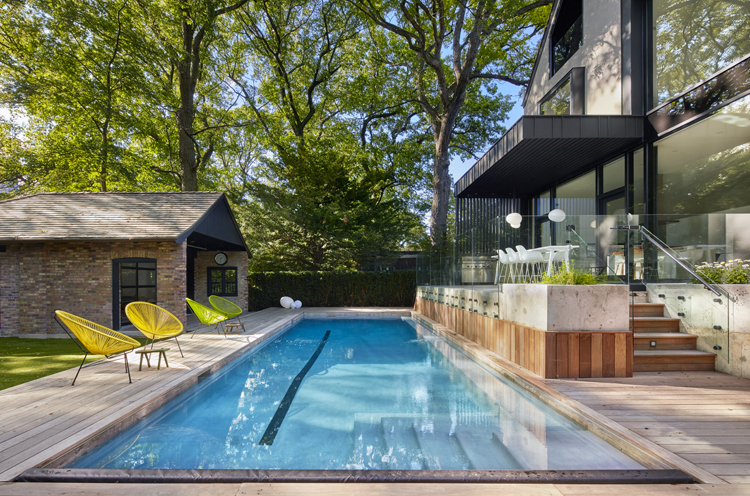 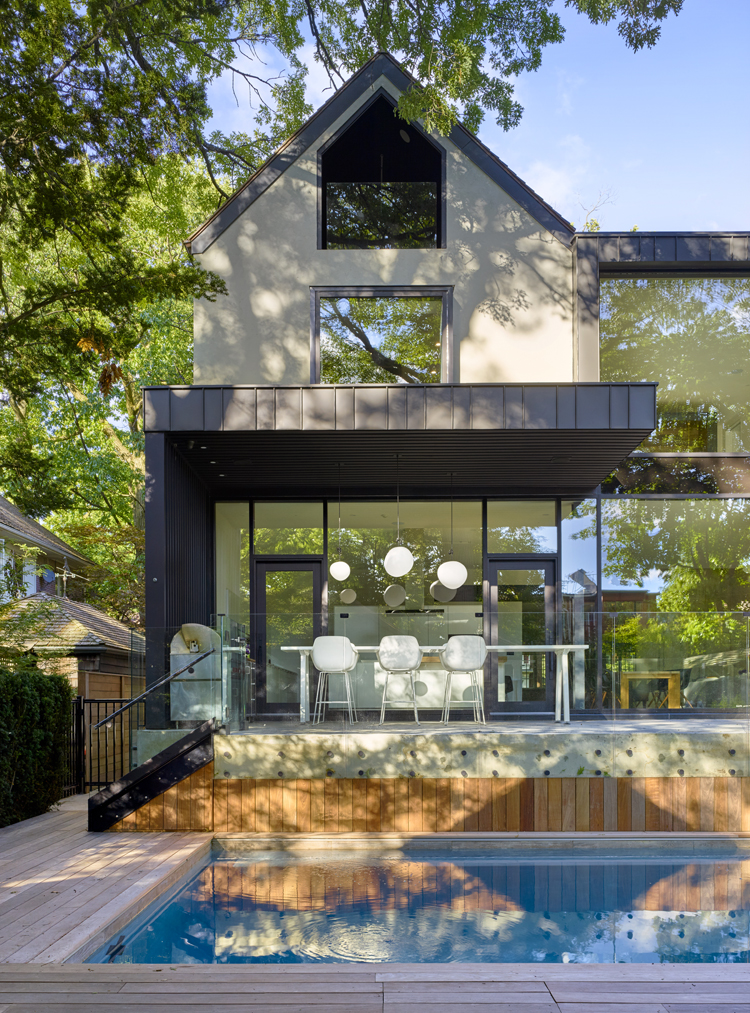 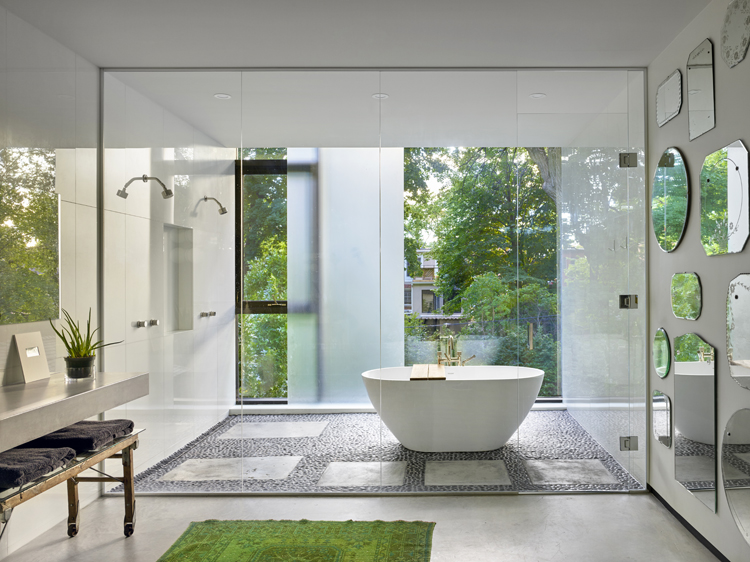 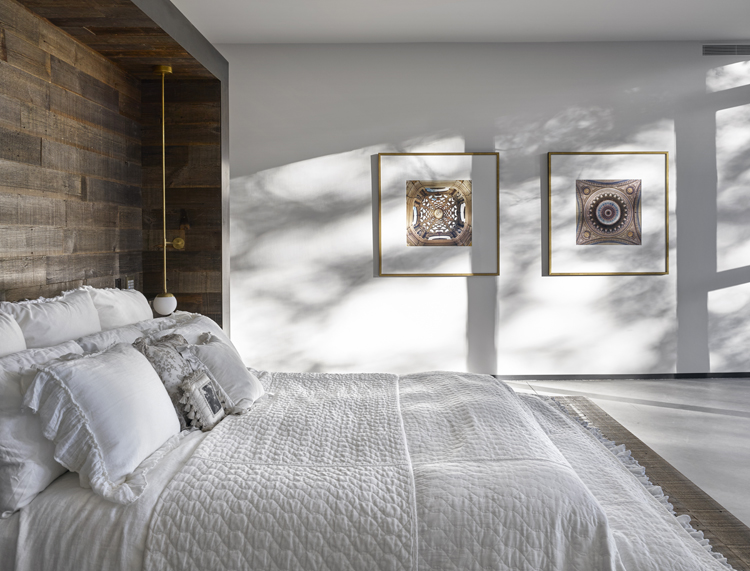 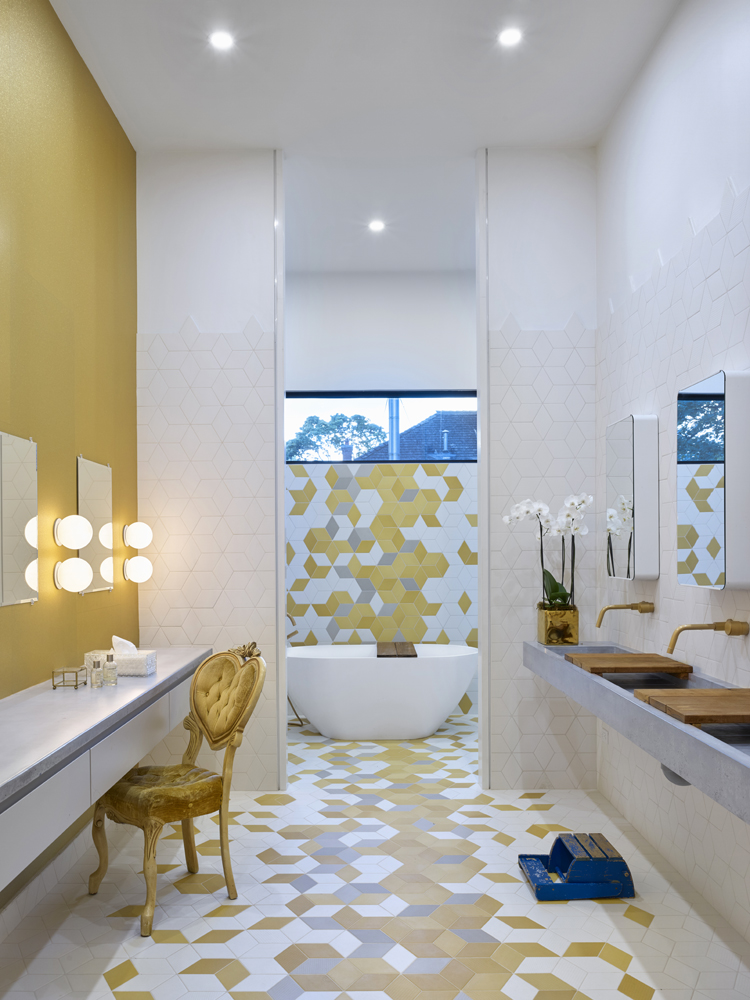 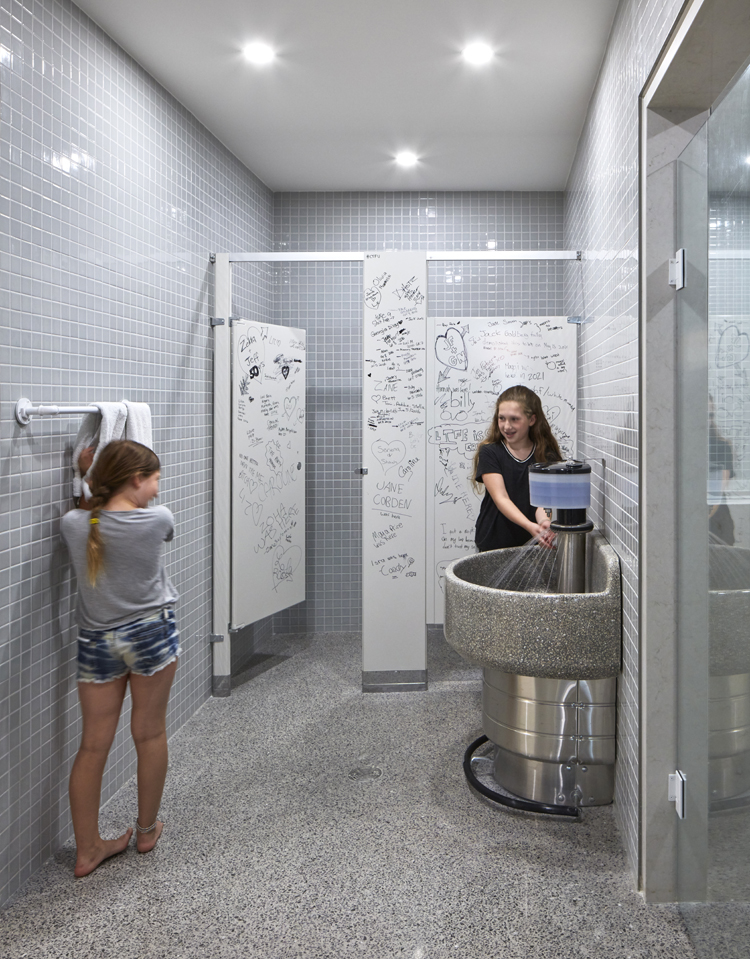 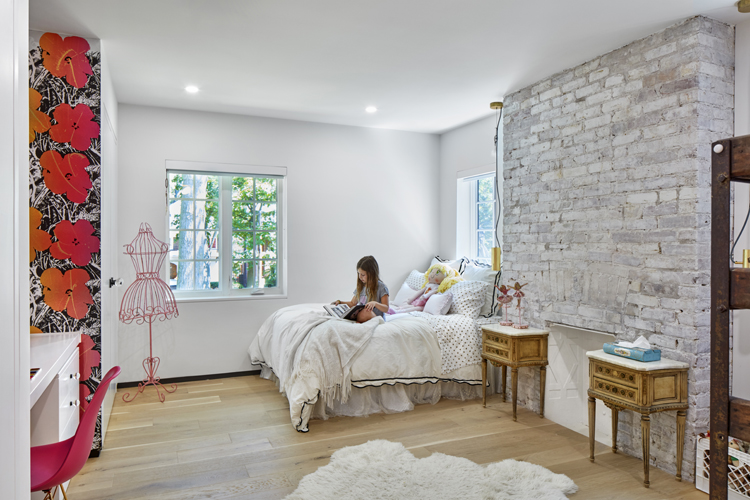 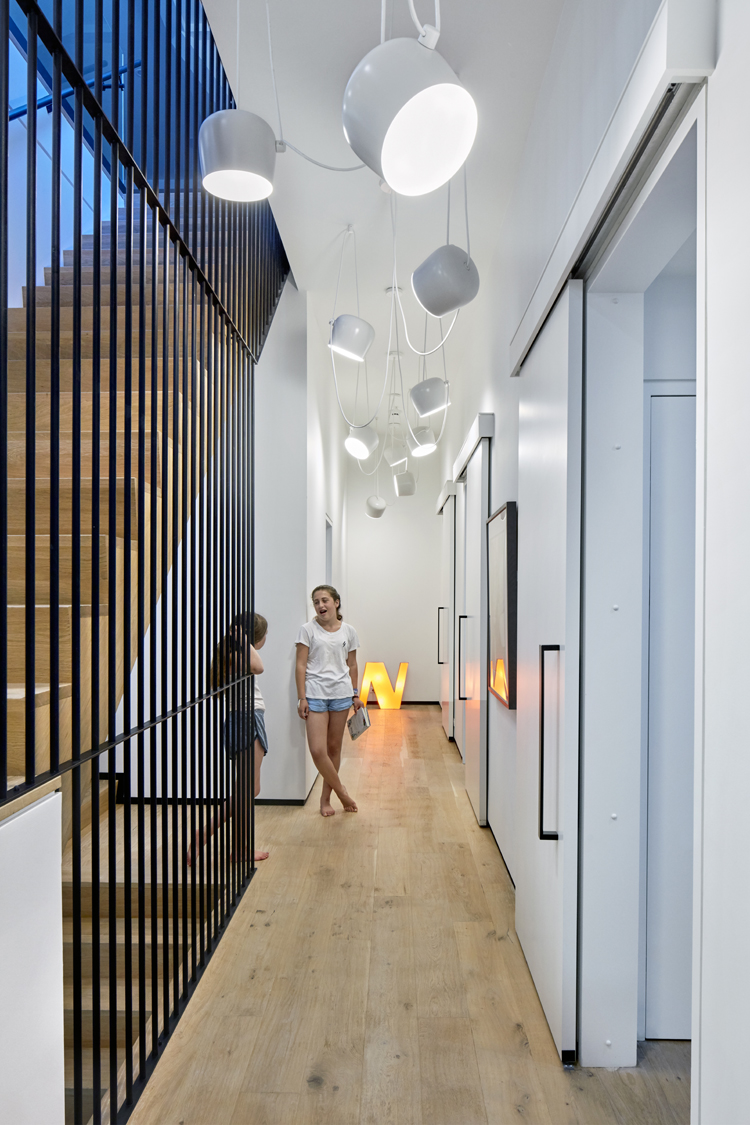 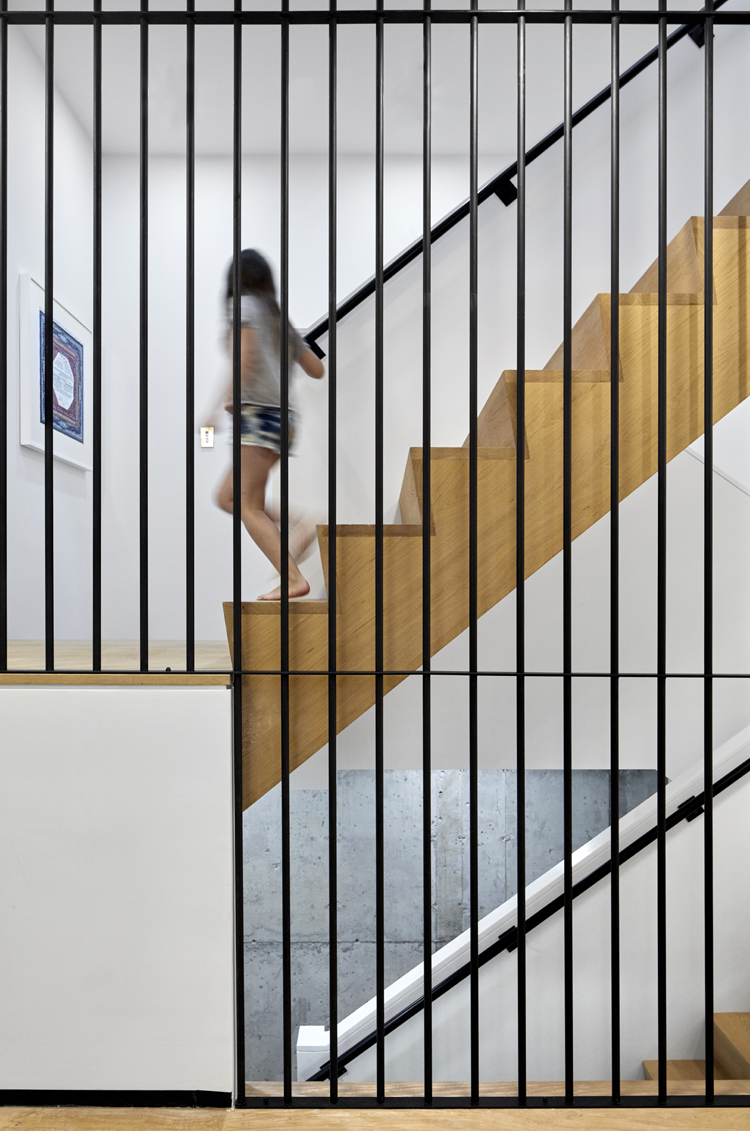 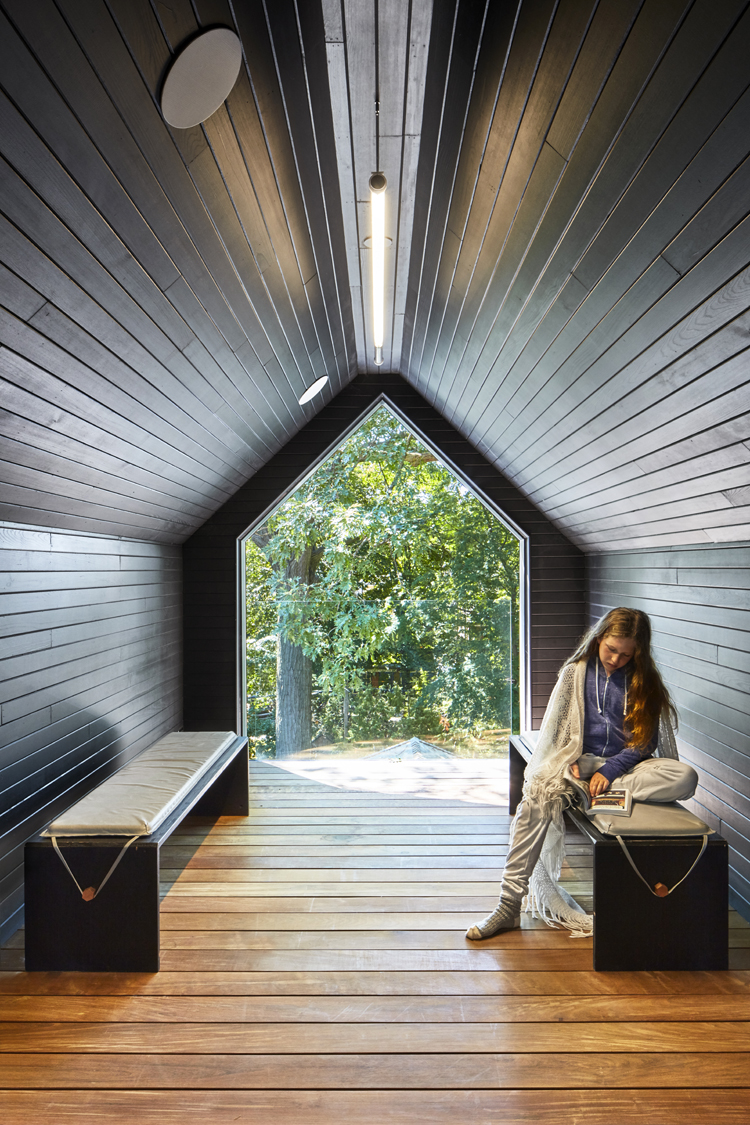