Masquespacio has recently complete the interiors for Hikari Yakitori Bar, the second project from the founders of Nozomi Sushi Bar, located in the same district of Ruzafa in Valencia two steps ahead from their actual restaurant.

After the big success of Nozomi sushi bar with a waiting list of 2 months, founders José Miguel and Nuria, together with their disciple Clara, decided to continue to study their passion for Japanese food. This time they wanted to introduce a totally new concept through Hikari, Yakitori Bar, traduced literally in a skewers bar that as well as his big brother Nozomi carries on the name of a high velocity Japanese train. 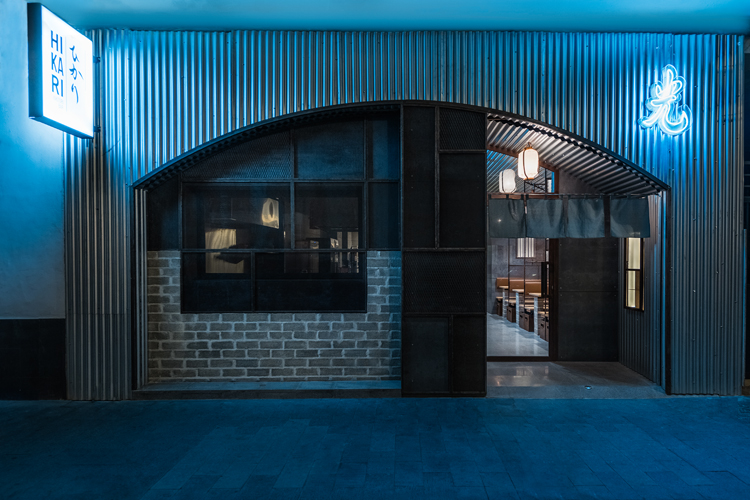 Differently to the previous project the interior designed by creative consultancy Masquespacio, has been inspired by the different quarters and alleys of Kabukicho, Omoide Yokocho and Hajimeya in Tokyo, where most of the of the yakitori bars are established.

“We went to one of the most authentic neighborhoods from Tokyo bringing back their noise and smell, but reinventing their visual pollution” explain Masquespacio. 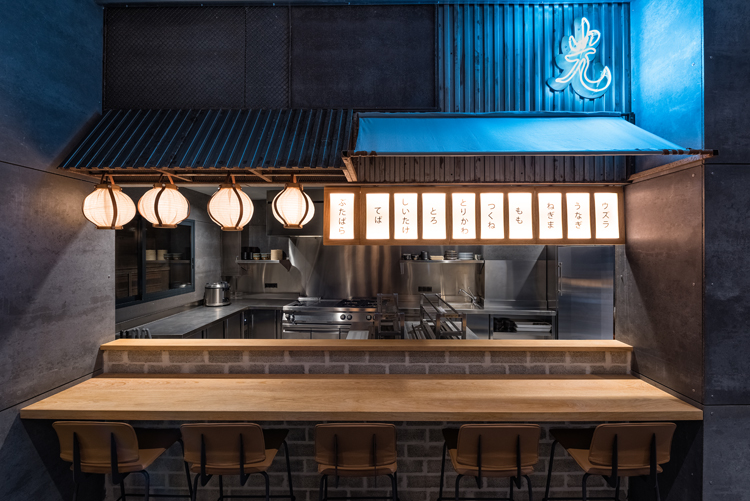 Starting from the façade we can immediately recognize the entrance to one of Tokyo’s tunnels, that invites us to enter to the intimate and at the same time eclectic interior, that with the dimmed light and flames coming out of the kitchen catches the visitor from the beginning till the end. Here you can recognize straight away the fusion between noble and industrial materials, classic and contemporary, always through an own vision that clearly represents the identity from Nozomi’s company.

“The reinterpretation of the Kabukicho, Omoide Yokocho and Hajimeya alleys is done through a monochrome color scheme represented by grey and rusty finishes, as wall as a touch of wood that adds warmth to the overall concept” say the architects. 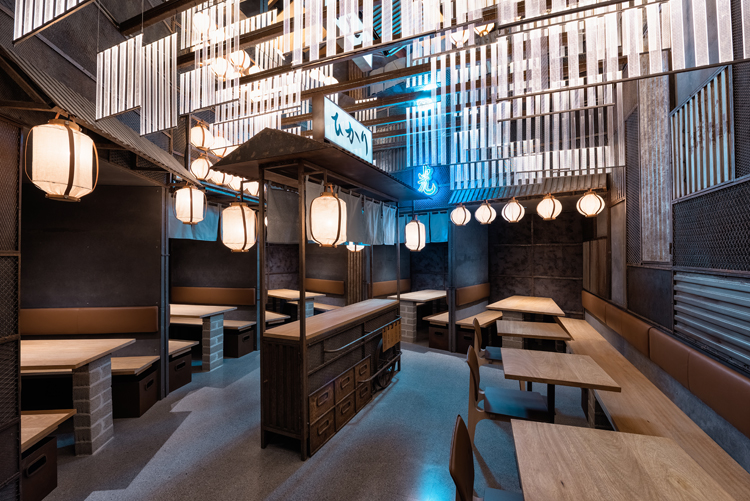 The big tunnel we are passing through takes us to the second part of the venue, while we are followed by the flames from the kitchen.

“During our walk till the end of the tunnel we can see how wood is mixed with concrete and metal, while the classic lanterns cast a shadow of typical alley light in the corridors”, adds Masquespacio.

Once turned right we can see a square without exit full of lighted boards that hang from the ceiling, a small food stand and a reinvention of the commerce of the famous district from the Japanese capital, here used like a set of small houses that settle the visitors of the restaurant. 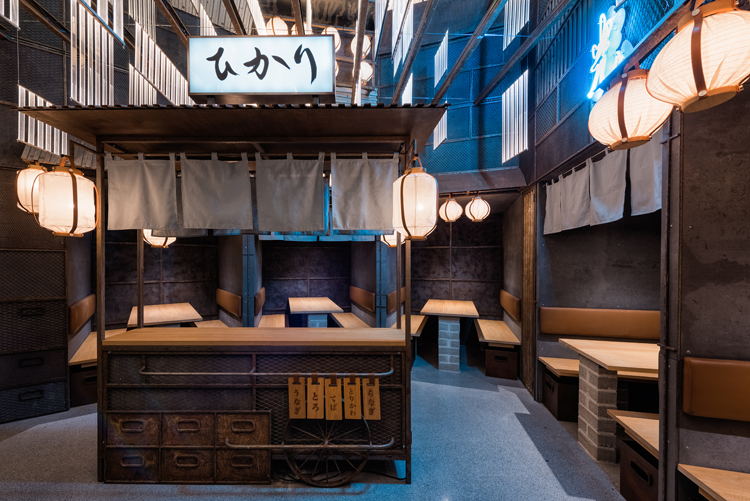 From the metal, cement and wood interior of the small houses, below a dimmed light, the visitor enjoys an overwhelming view on the central place full of contrasts like if they wear sitting in one of the most authentic streets of the Nippon city.

“The light sculptures hanging from the ceiling and the walls are a metaphor of the neon signs that create a strong visual pollution on the bustling streets of Tokyo” explains the design team.

In summary, if Nozomi took us to Kyoto, this time the visitor of Hikari will feel like if they were visiting one of the most authentic streets of Tokyo. 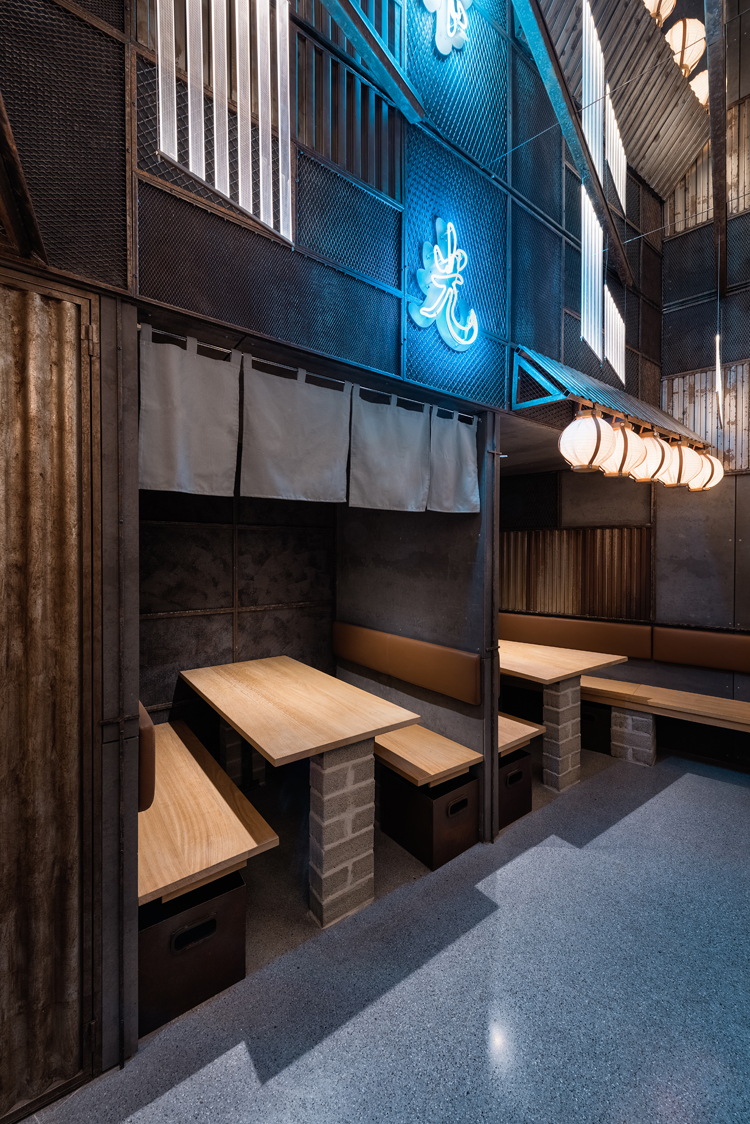 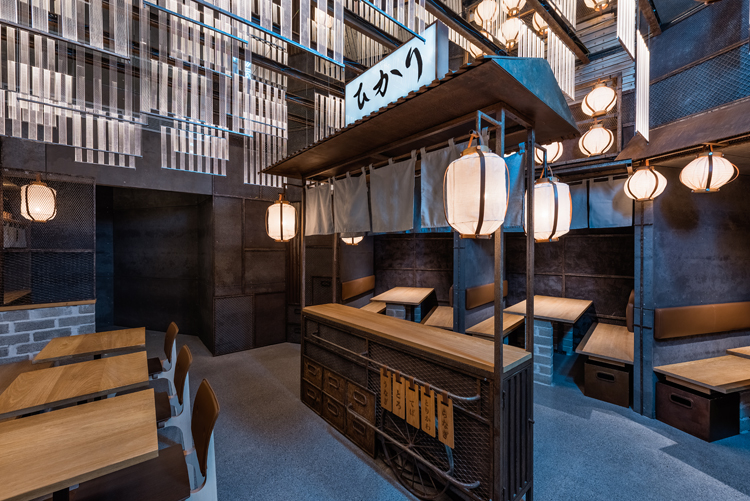 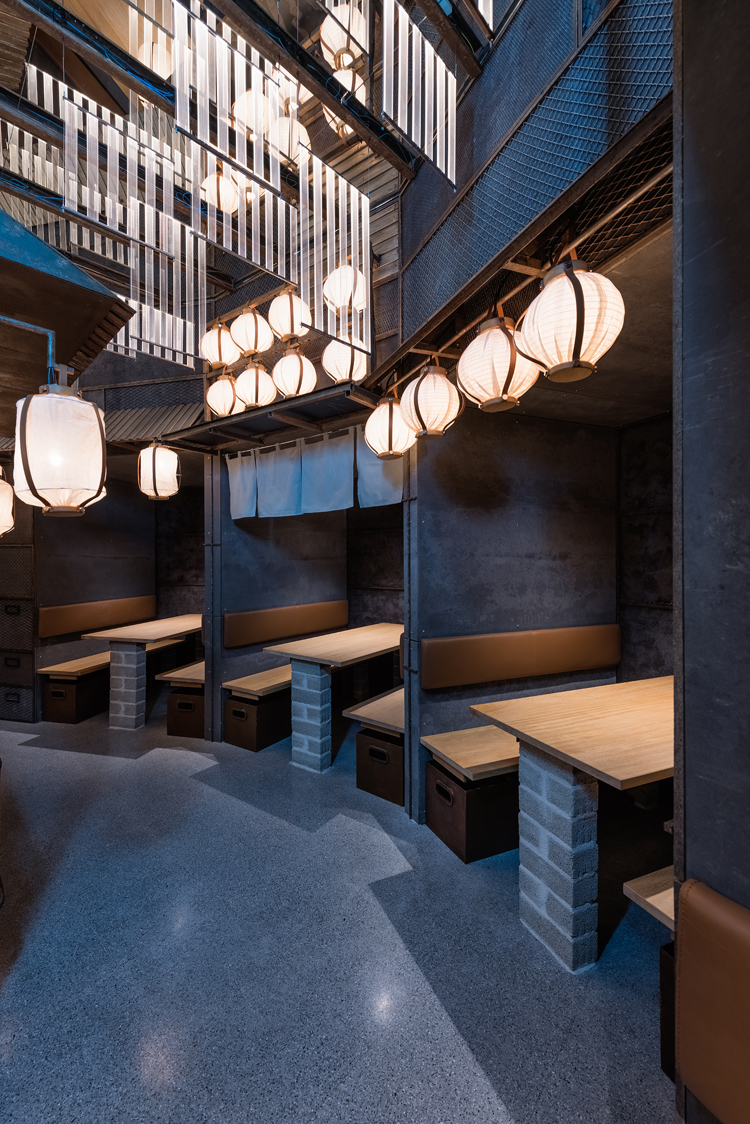