Located in a collective housing area near Gaerong Station in Songpa-gu, Seoul, the Darak-darak Neighborhood Facility by architecture studio THE_SYSTEM LAB, is both a family home and a commercial enterprise, featuring offices, studio space and a cafe run by the client’s wife.

The building owner, a salary man and his family wanted a new place where can give their children ungorgettable memories and guarantee profits for their later years. The owner dreamed to have sweet attic, profitable shops and studios in 1st floor, and offices for rent in his new building but his site, 60 square meters, was not spacious enough to have all of them. Therefore, he faced a big challenge to make the most of the limited area. 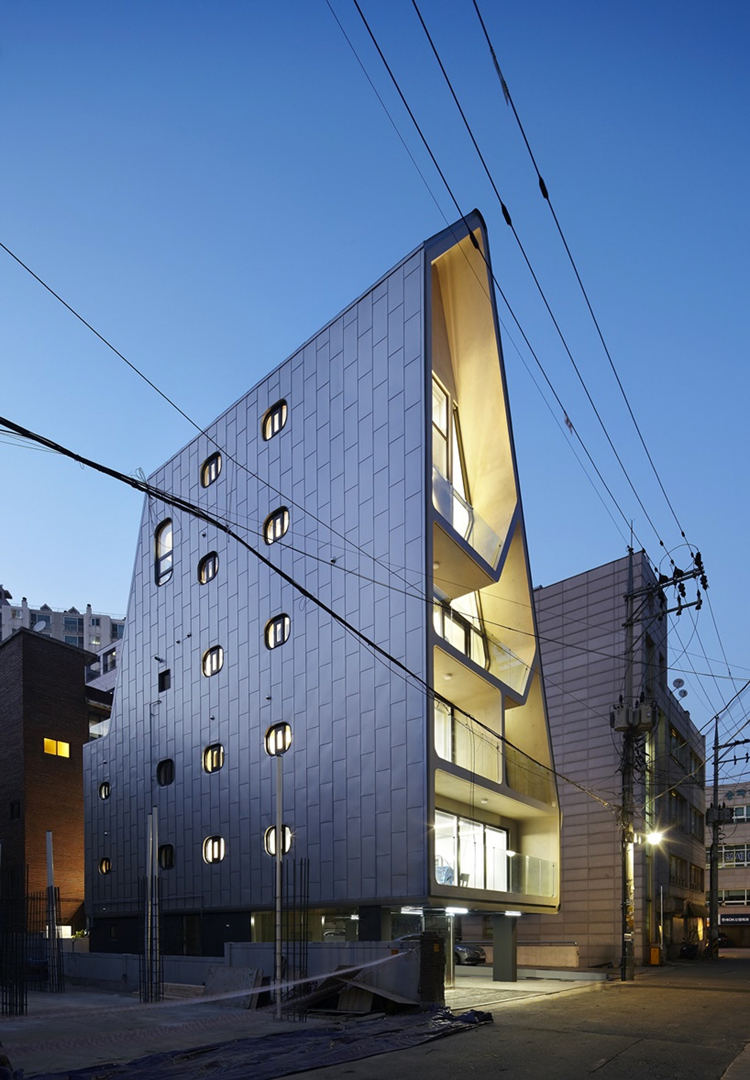 The guiding concept behind THE_SYSTEM LAB‘s project is to create, what the owner terms it, a ‘mini mixed-used building’ with suitable housing for all. As paradigm has changes, the idea of “building my house” which was regarded exclusive property of the rich, became many people’s desire.

The different thing is, rather than building lordly mansions, many people want to build suitable houses. Darak-darak Neighborhood Facility is also a result of such thought. Building a house required much initial capital so the owner planned to build the structure making profits and called it “Mini mixed-use building”. 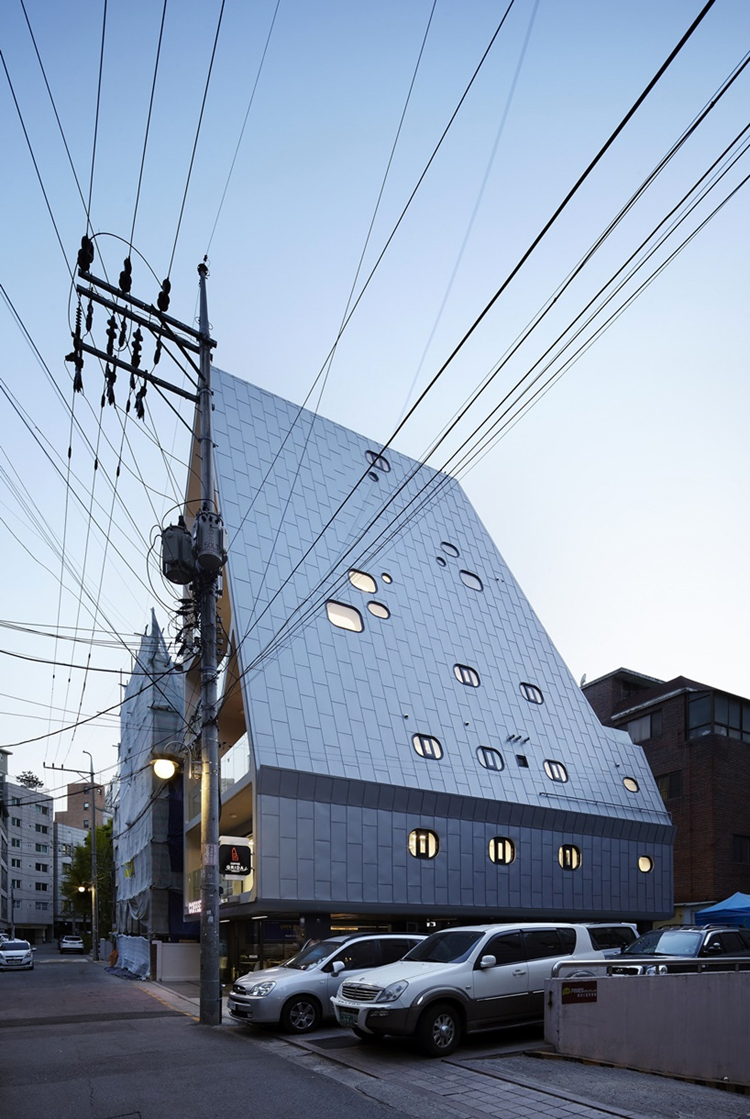 At first, he made far larger spaces than esimated numbers on the floor plan to make users feel the place more spacious than other buildings of same floor area by using due north line. Normally, many buildings have balconies of stair form but the building’s balcony is extended north and south and a diagonal line wall was made into interior space to maximze interior room. In addition, an elevation in a gable form which symmetric with north due line is not only an elevation element but a part of construction because it is connected with the building’s section. Each house has high ceiling in a gable form and upper stair, not estimated in gross area. It means that few attics also constitute each house. 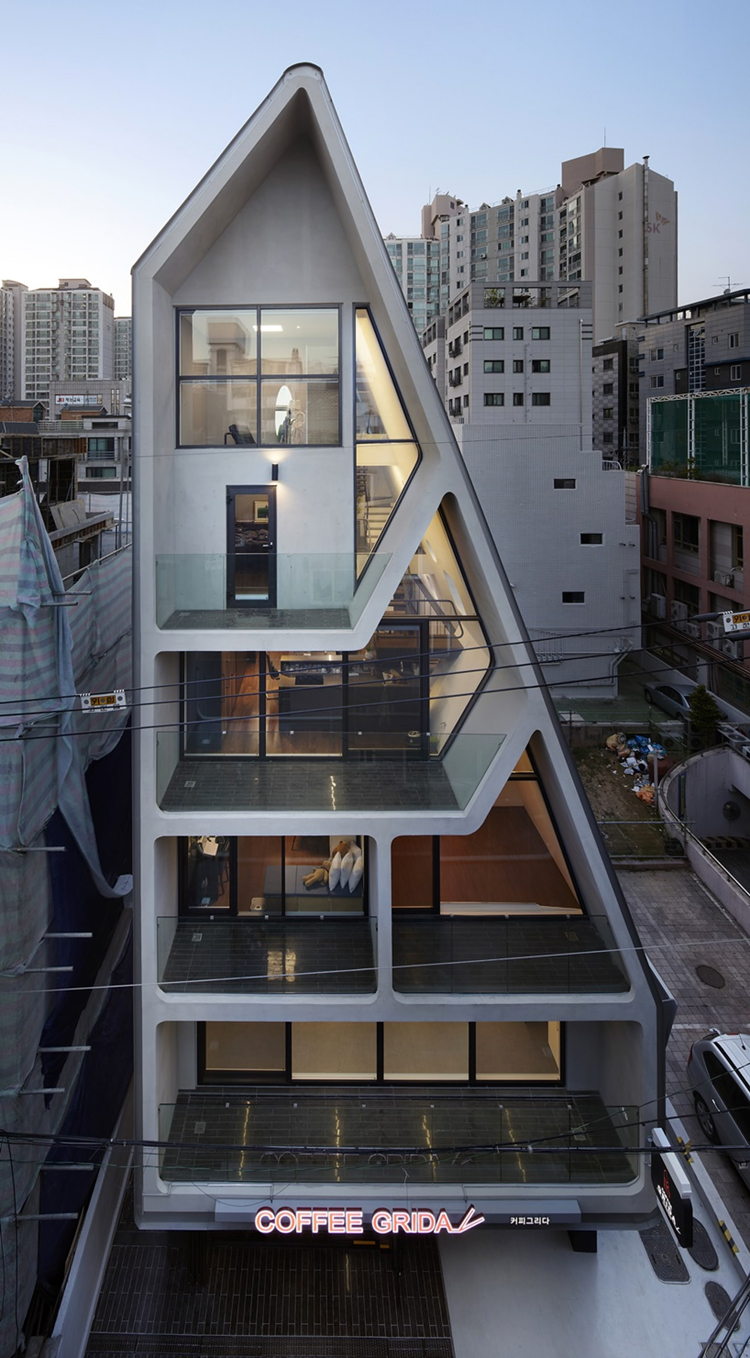 The shape of the building was strongly influenced by building law. The building had to avoid street width and north due line because it stands against a road. Also, there were many challenges for core and flat surface to be approved to put pilotis in 1st floor. When the owner came to a conclusion that there was no way but to reduce his own space, the law revision abolishing road diagnoal line was annouced. Thanks to this, he could luckly complete the design satisfing many conditions. 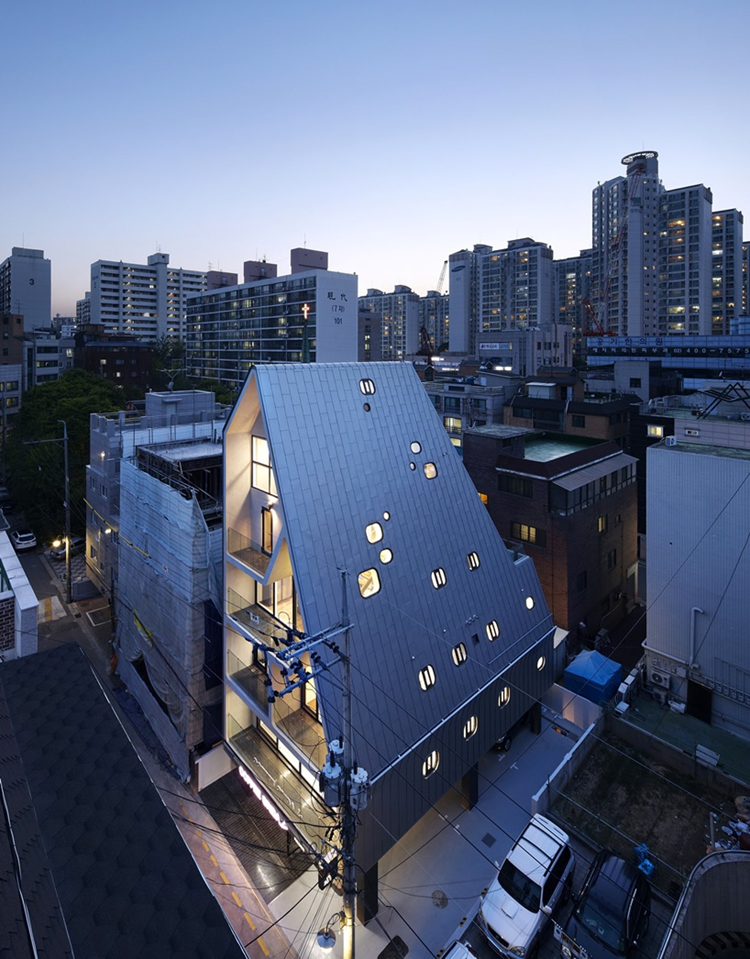 Concrete is the main material of the buidling. To increase outside Insulation performance and be safe from water leak, a colored-steel sheet was put like as a blanket covers the mass from the end of the roof to the first floor celing along with oblique face. It was not easy to find scenic view in the collective housing area but by allocating balcony spaces excluded in gross estimation and round windows and doors as many as possible along with oblique line, the building is well-lighted and commands sky view. 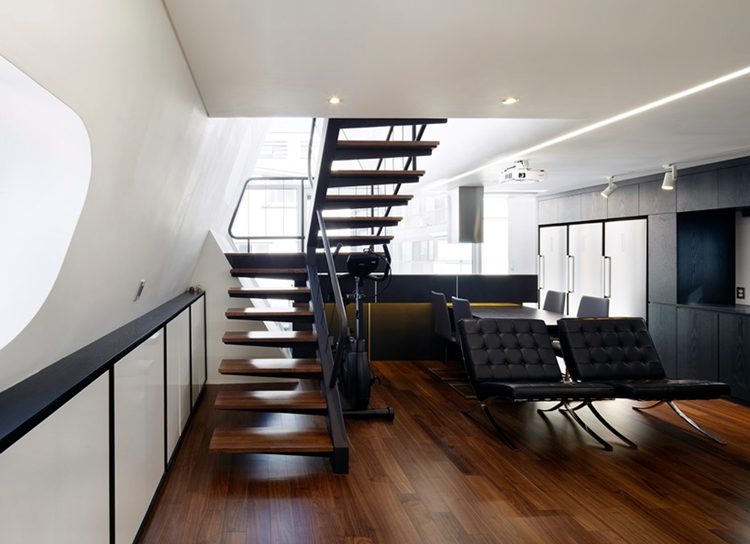 There are parking space for 5 vehicles, a cafe running by the owner’s wife, and core in 1st floor. By coloring pilotis, frame of windows and doors and floor stones with dark color, the owner intended to get the lower part organized and make the building mimic the image of floating in the air. 2nd floor and 3rd floor consist of offices for renting and studios. The ceiling facing the south and frontal-posterior balcony spaces maximize the sense of space and make glare effect. In addition, 3 studios have different form from one another, offering special spaces which led to higher earnings from leasing than in the surrounding areas. 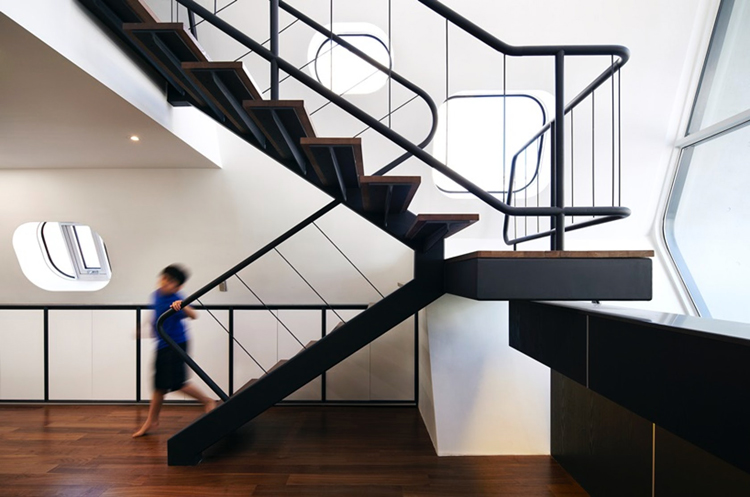 The owner’s resident space is located in the upper part of the buidling which includes from 4th floor to 6th floor and attics. He made a new residental space with interior stairs and attics. He removed the boundary of living room and kitchen. 4th floor, which his family spends most of their time consist of interior stairs to 5th floor, Irish style kitchen and family room. A stair case from 5th floor to 6th floor and diagonal wall create high ceiling of 8m and vertically connect each room as a whole house. 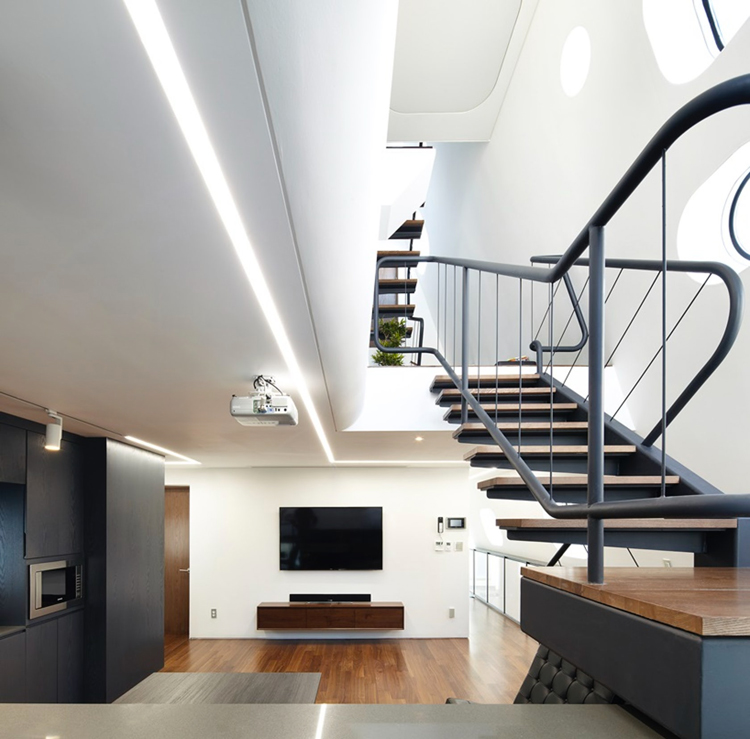 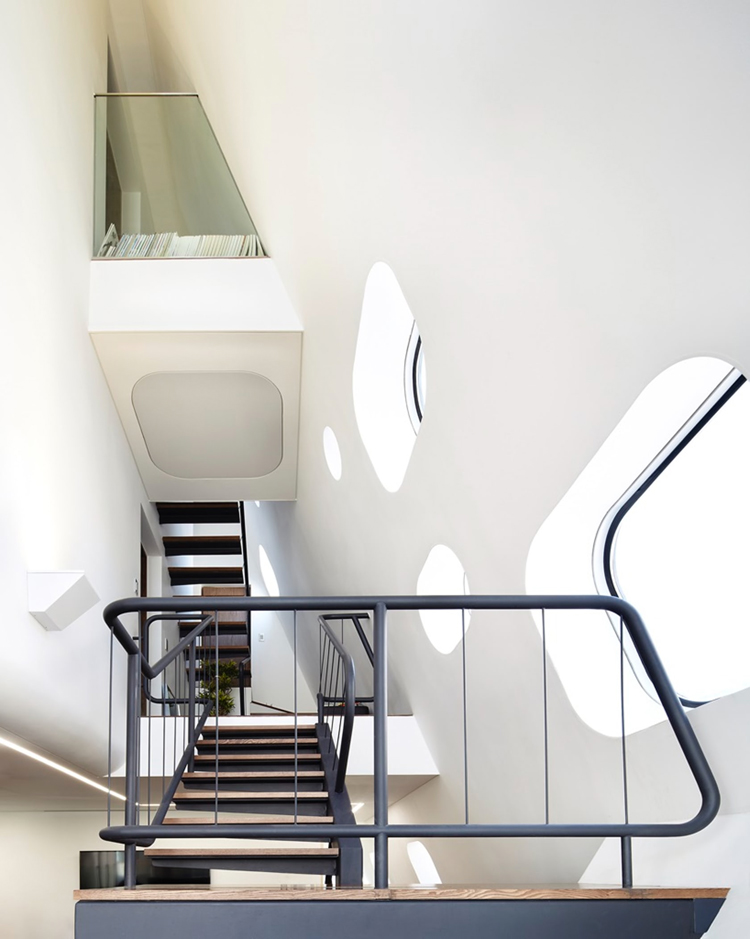 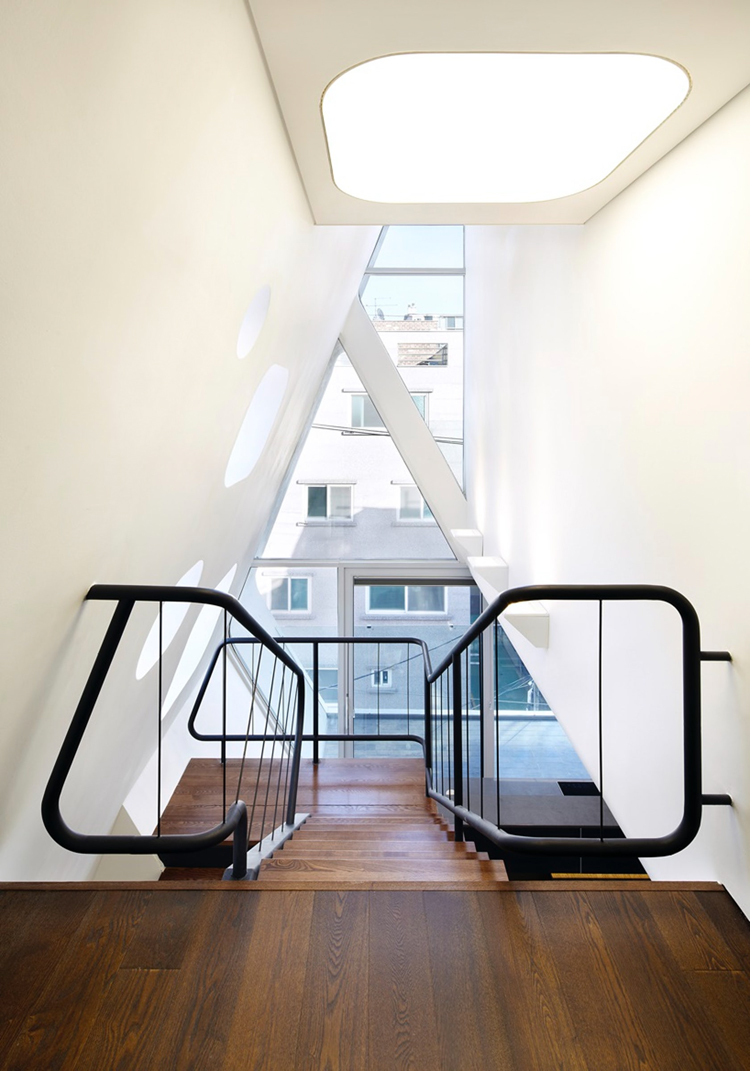