Architect Vincent Parreira has converted a 19th century photography studio into two apartments in the historic center of Paris. The clients, two siblings, own these two contiguous apartments, which share the same architecture and program, i.e., short-term rental properties. Access to these two prestigious apartments is via the former service staircase and the corridor leading to rooms formerly allocated to domestic personnel – yet another sign of the total transformation of uses and distributing architectural hierarchies so dear to the Second Empire bourgeoisie. 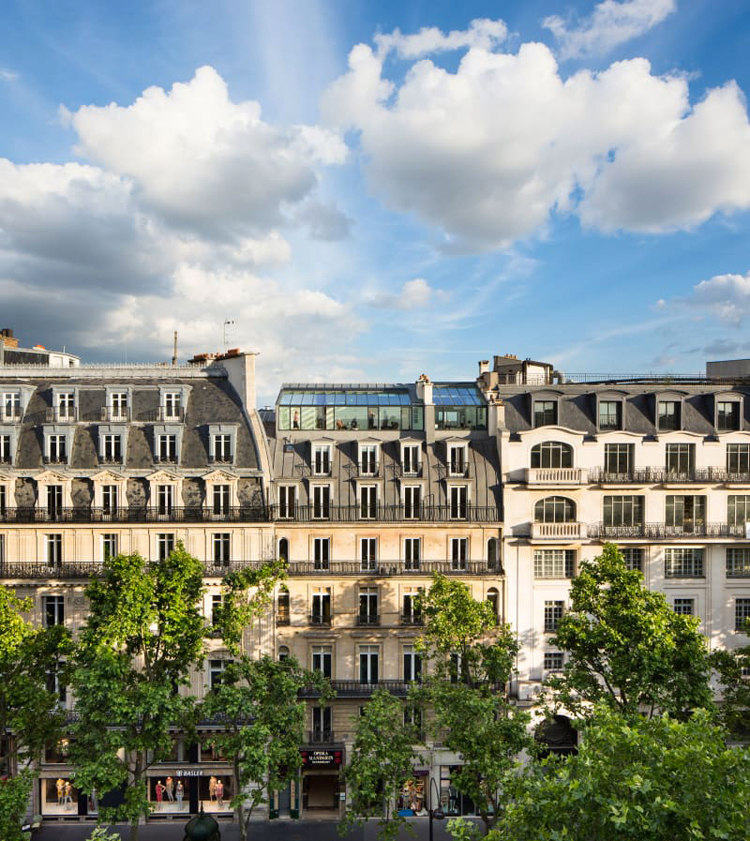 Each apartment is a duplex, whose bedrooms and bathrooms are located on the lower level, while the reception area with its drawing room and kitchen are situated on the le upper level, under the glass roof of what used to be a photographer’s studio. The upper level enjoys double exposure in both apartments. The views from these two vantage points reveal two quite different faces of the Parisian panorama. On the drawing room side, the view includes the gold and prestige of the Opéra Garnier, and the layout of the façades of the Grand Hôtel. From the kitchen side, the view opens to the chaotic landscape of Paris behind the scenes, its rooftops cluttered with all the required service elements – air conditioning systems, fire escapes, smoke dampers, etc. – of this functioning urban décor. 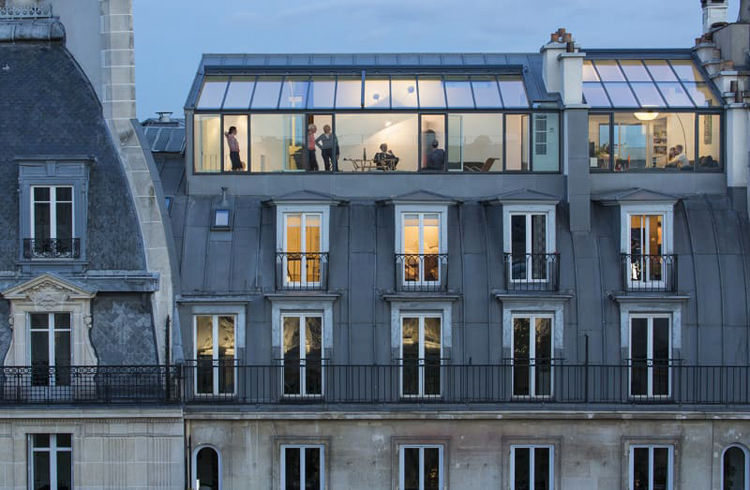 An important part of this project involved the replacement of the glass roof, requiring an important effort in terms of design, follow-up and budget, comparable to one for a single-family detached house, according to Vincent Parreira. The new roof has the exact same dimensions of the one built in 1899, and respects the placement of the glazed parts on the façade and roof.

The architect’s lifestyle proposals are most fully realized in the apartments, which, intended for a single occupant or a couple, are unencumbered by issues of privacy or access to services raised by the presence of several autonomous and independent occupants. Thus, Parreira was able to take liberties in the partitioning of the spaces through his use of transparent glass and one-way mirrors. Glazing offered the possibility of partitioning a small area, or enlarging the space by hiding the disorder of a bathroom. 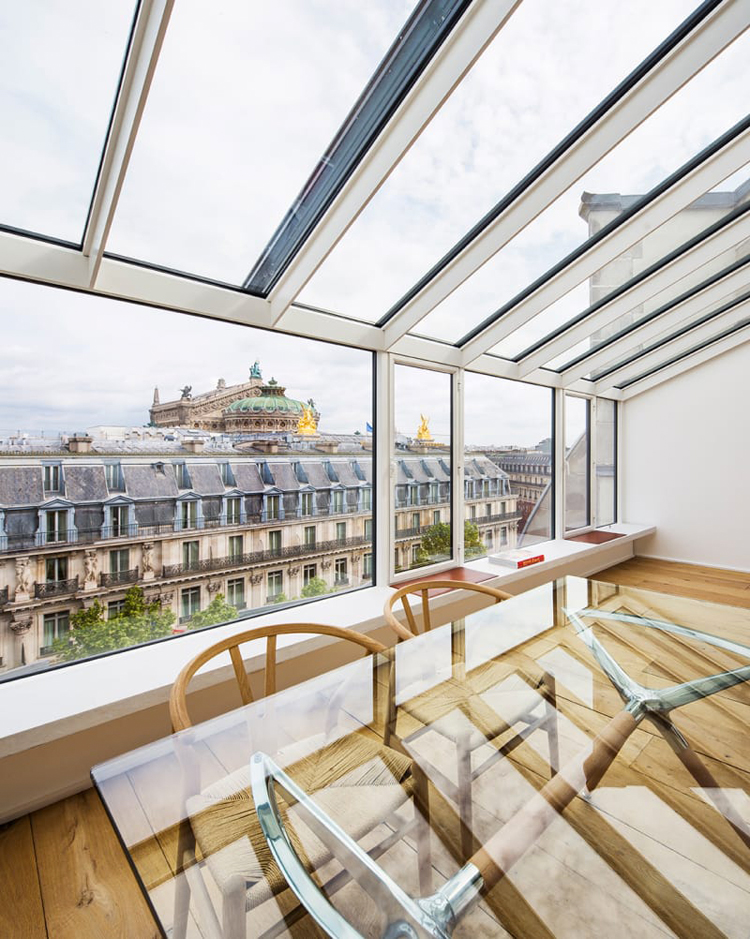 “The bedroom is placed behind a transparent glass wall,” explains the architect. “Privacy is achieved not by means of a wall but rather with a curtain, through which shadows can be perceived. as for the large mirrored section, a distant wink at wink from afar to the galerie des glaces in versailles generates an ambiguous situation. is it a glass wall, or a closet? the idea it might conceal a shower never even crosses one’s mind. there is of course a bit of a theatrical game of appearance/disappearance, and the will to always be able to engage with the entire space.” 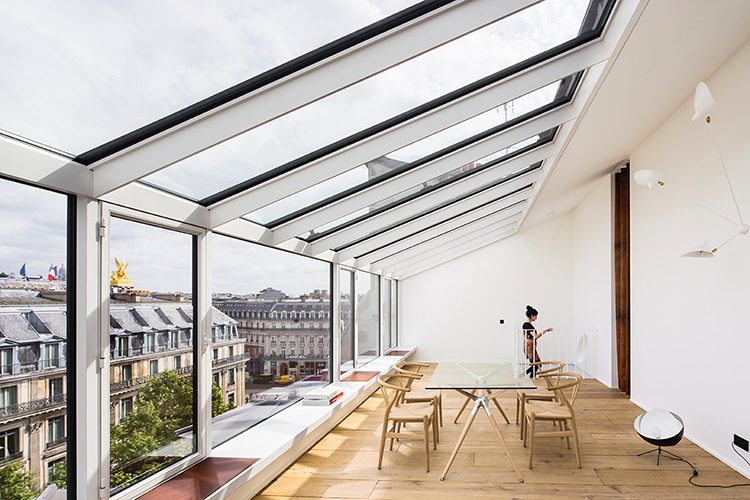 The existing staircase was preserved and treated as a quirky object whose material and structural presence is somewhat out of place. It provides a link with an upper floor as open as the lower floor is private. In the drawing room, the occupant is seemingly in a display case, thrust into the urban space, and could also create the feeling of being the focus of a show, or of playing a part in one of these action crime movies which often end on the ocean of zinc and slate of Parisian rooftops. 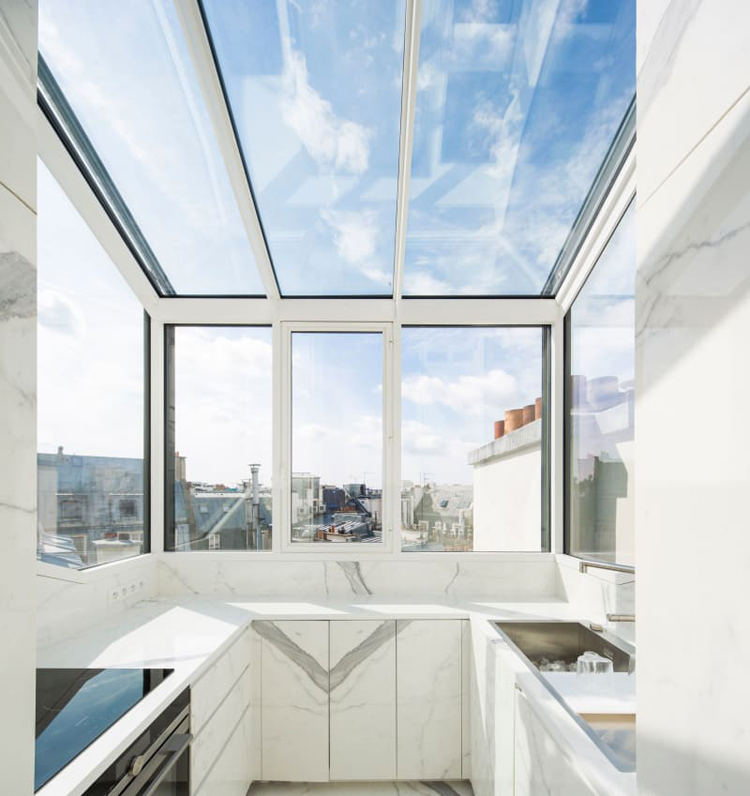 The built-in elements of furniture – storage cabinets and built-in banquette running along glazed façade which can serve as seating or a shelf – leave the space free of superfluous elements, which highlight the exceptional elements: leather curtain separating the kitchen and the drawing room, or inserts, also in leather, forming seating in front of the parts that can be opened in the glass façade, and the context overall.

“Sitting on the bench, you are completely carried away by the sky” concludes Parreira. 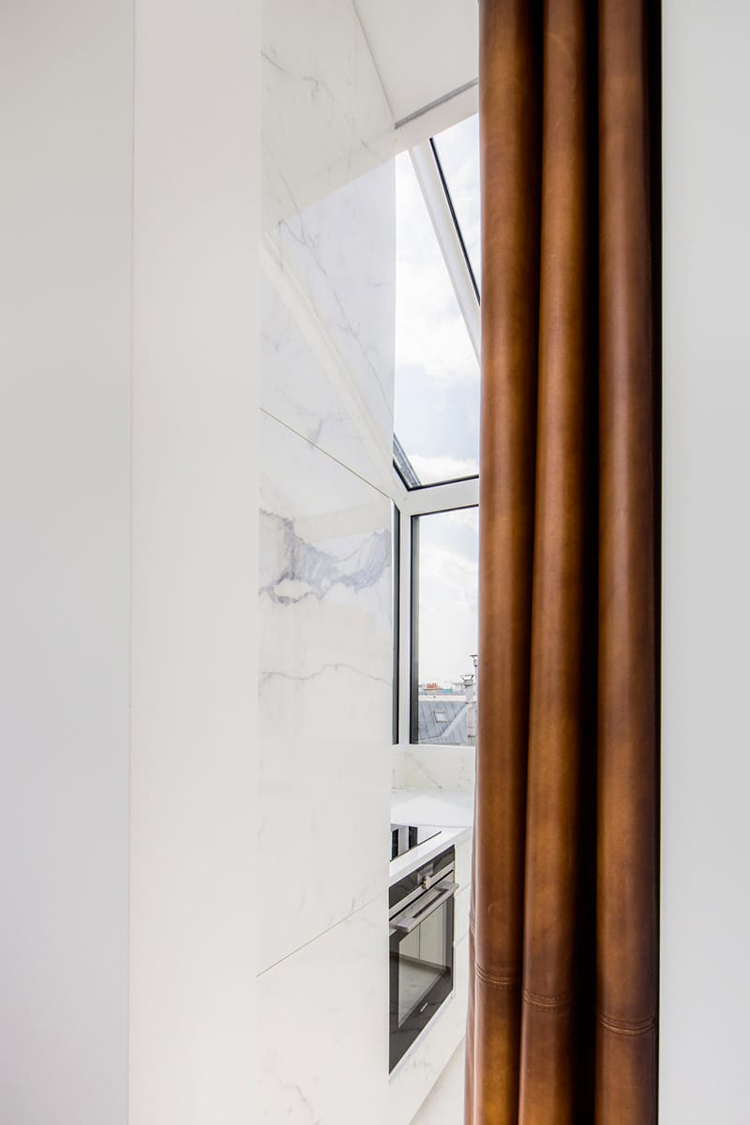 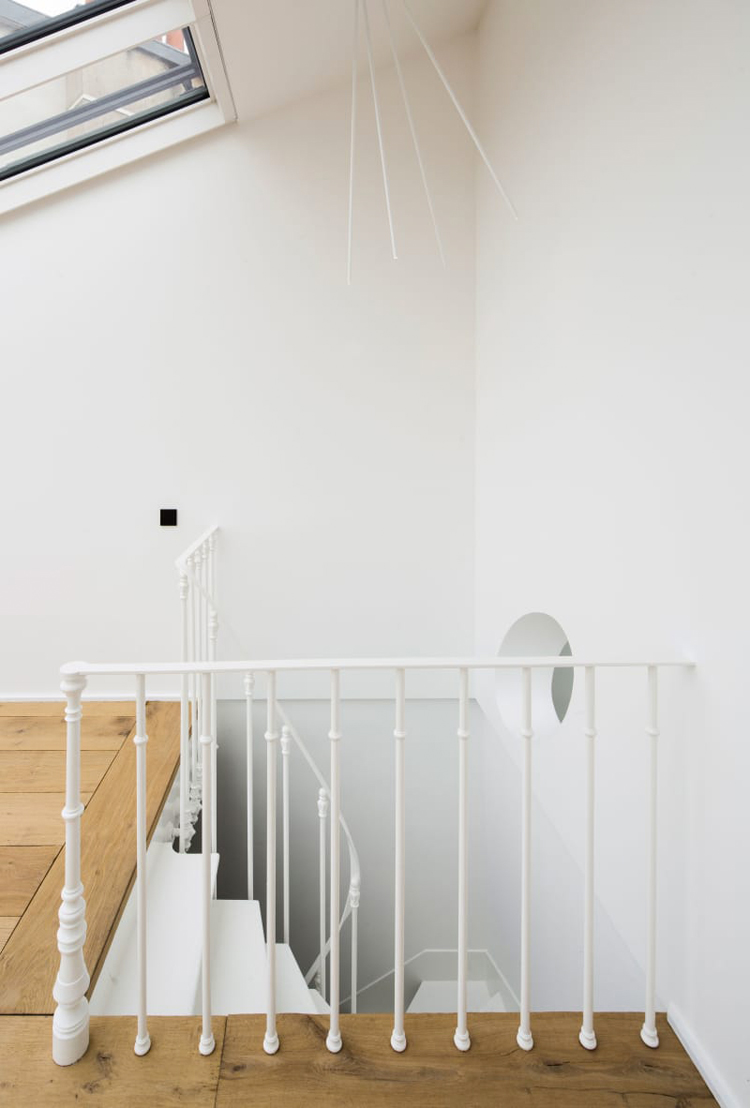 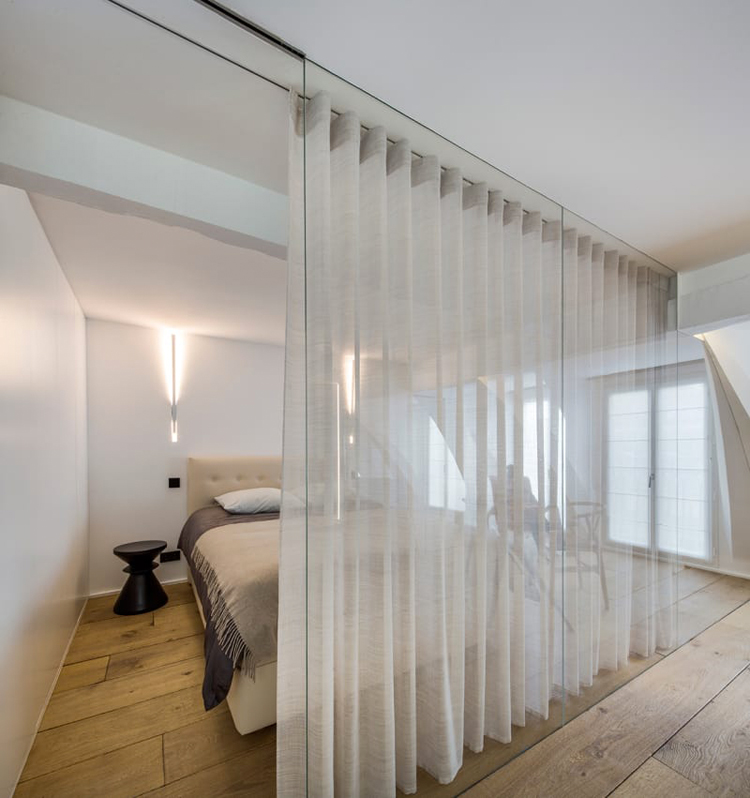 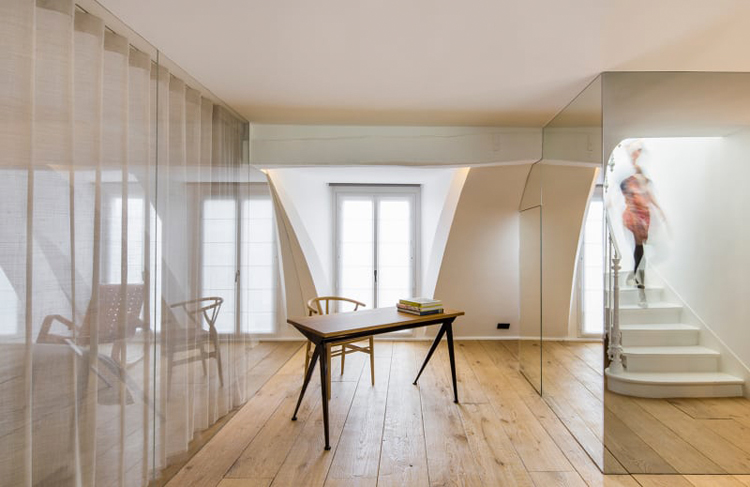 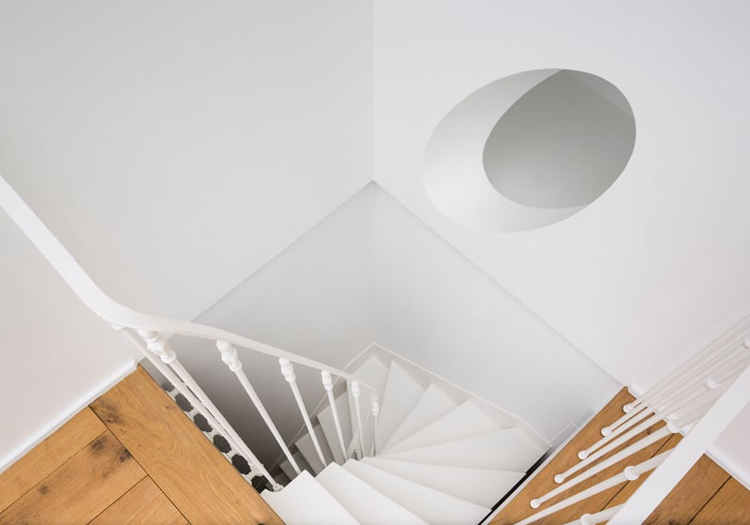 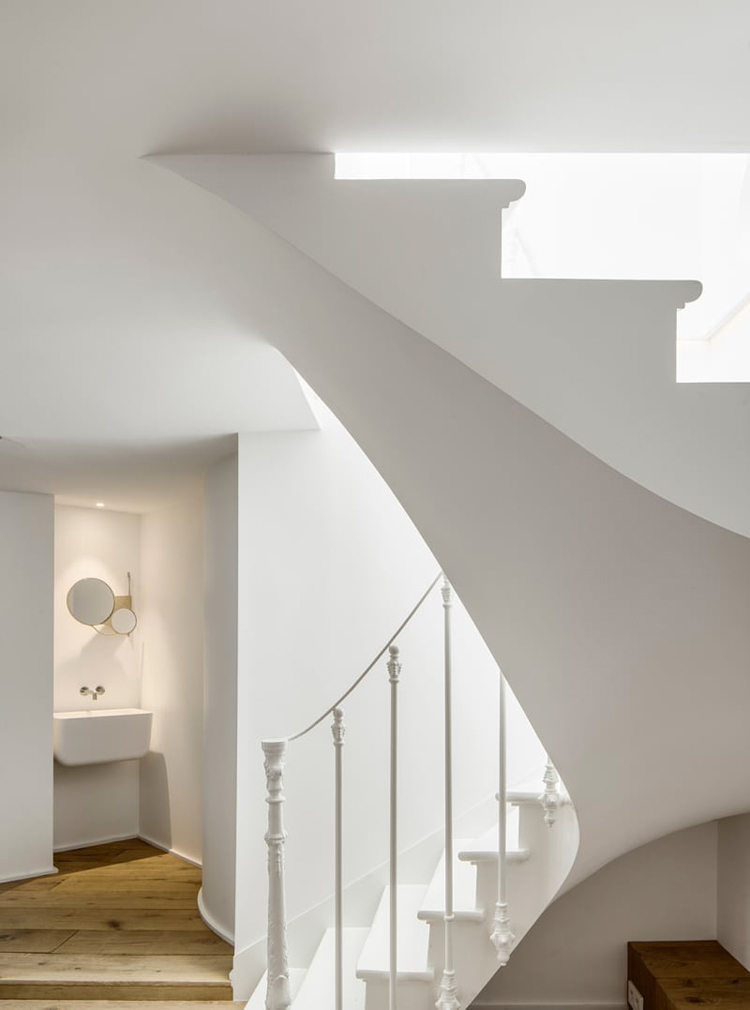 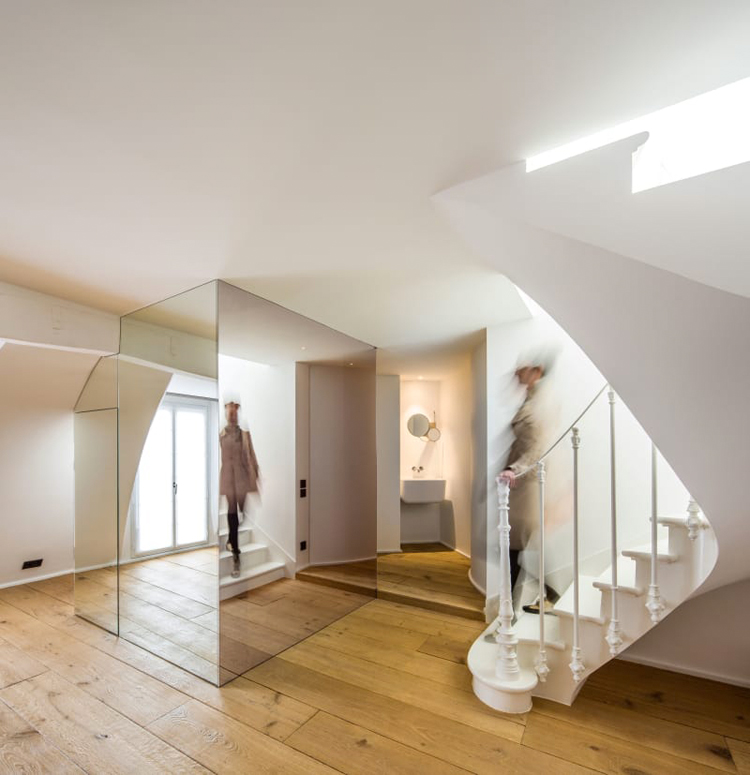 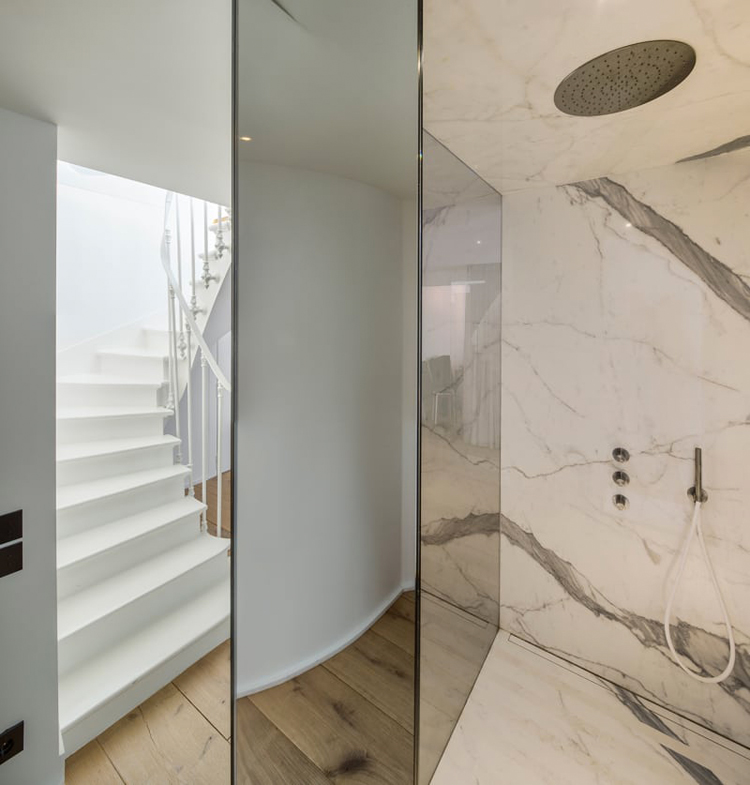 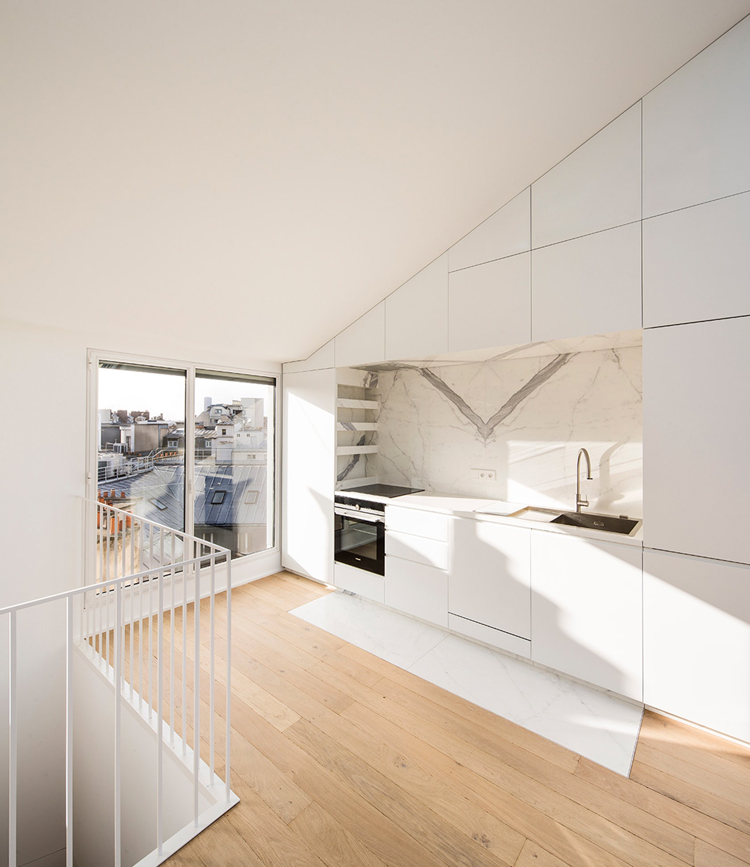 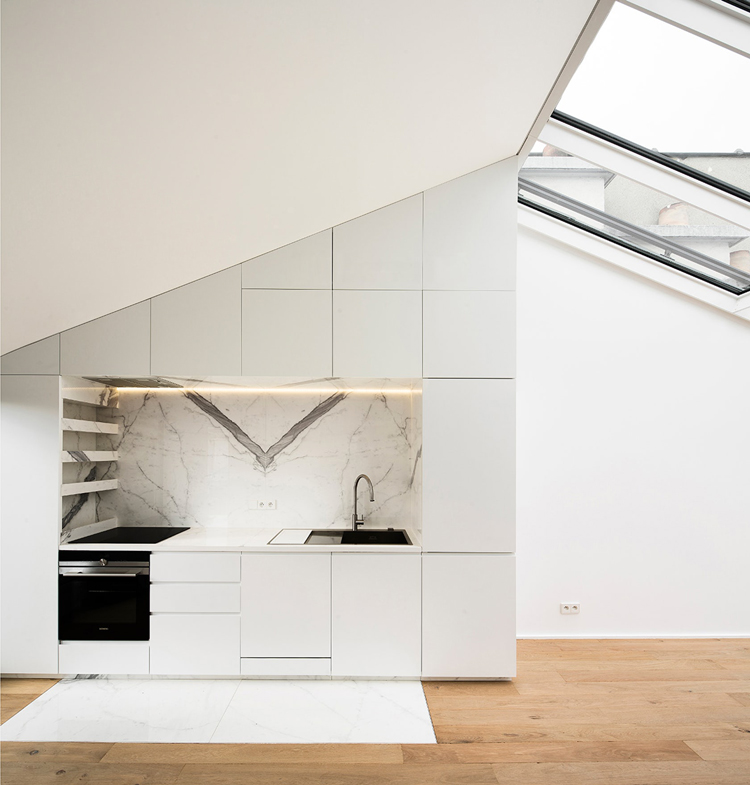 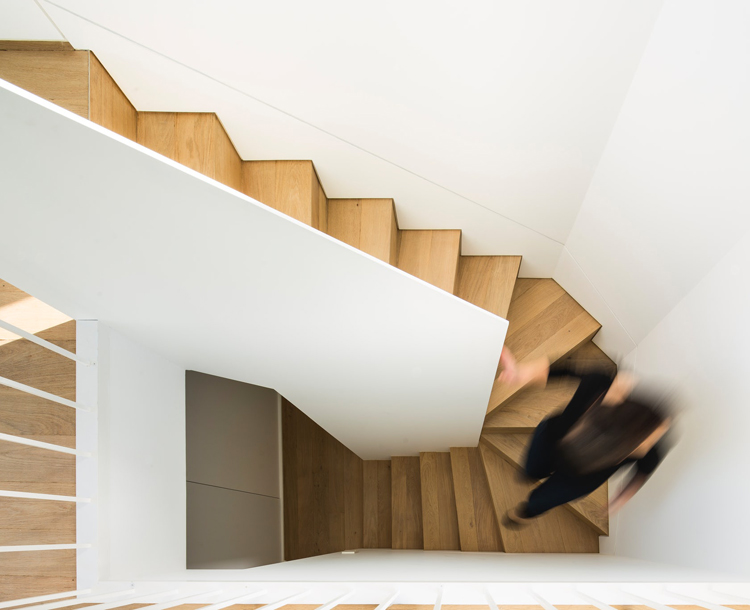 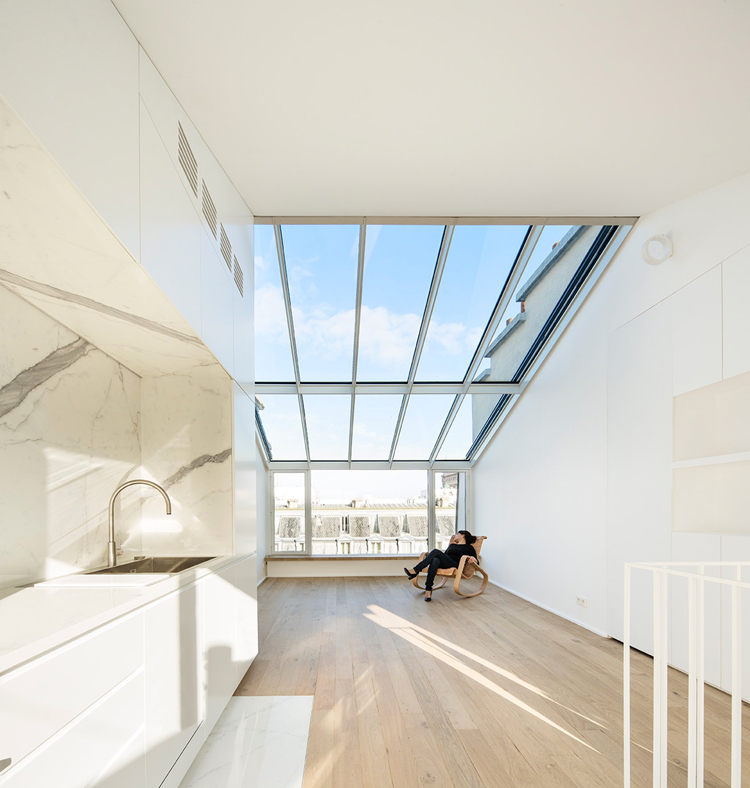