Australian practice Branch Studio Architects has recently designed a pavilion between trees as an extension to an existing home for a client with a need for a new master en-suite. Entry to the pavilion is provided via the extension of an exiting central corridor from the main house. This central ‘boardwalk’ splits the ensuite areas into two distinct spaces before peeling away into two circulation paths around a central arrangement of joinery dividing and defining the robes. As the spaces unfold the floor level rises gradually (to about 1m above ground level) via a series of platforms that subtly ascend and divide the spaces across the length of the building. With the rise of the building, each programme internally possesses a different relationship with the garden context. 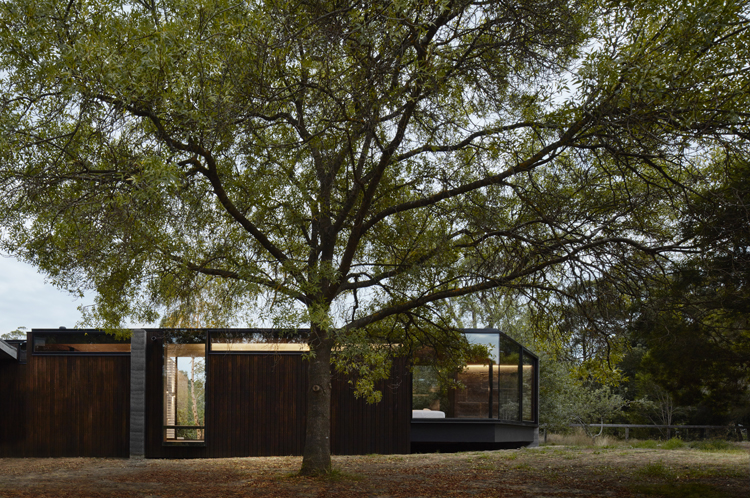 The ‘bathing’ area of the ensuite incorporates both an indoor and outdoor shower and a bath on the threshold of the internal-external building line. Large full height folding glass doors open to include the narrow external courtyard as part of the bathroom space giving it a direct connection with the garden. A half height rammed earth wall and a steel mesh screen provide privacy from the expansive property beyond without interrupting the views of the treetops and sky from the bath and outdoor shower. 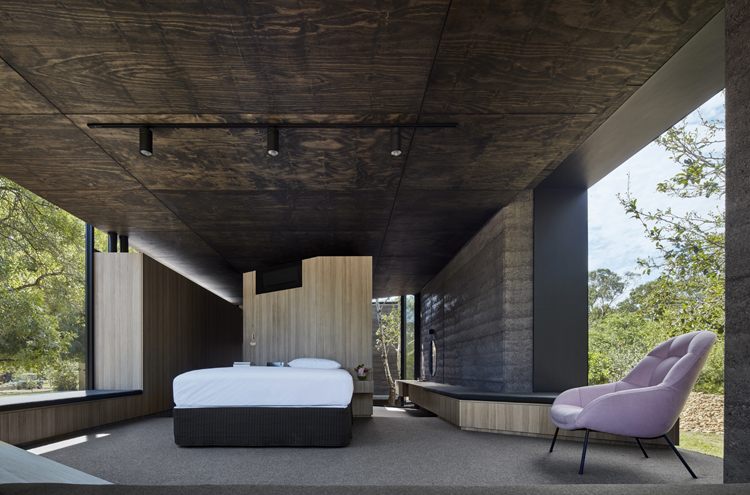 The robes float just above ground level and both sides have a direct link to the landscape. The woman’s closet to the south features a glass wall that opens to an open courtyard around one of the existing trees, an example of the structure built around the vegetation. A bench transitions into a side board and once again into a dresser at the perfect angle to force the occupant to view the exterior. Just to the north, the man’s wardrobe exhibits a slightly different feel, with only a smaller clerestory that directs views to the tree canopies beyond- canopies which also naturally filter light to the interior. A protruding window provides for a seating area elevated over the landscape. 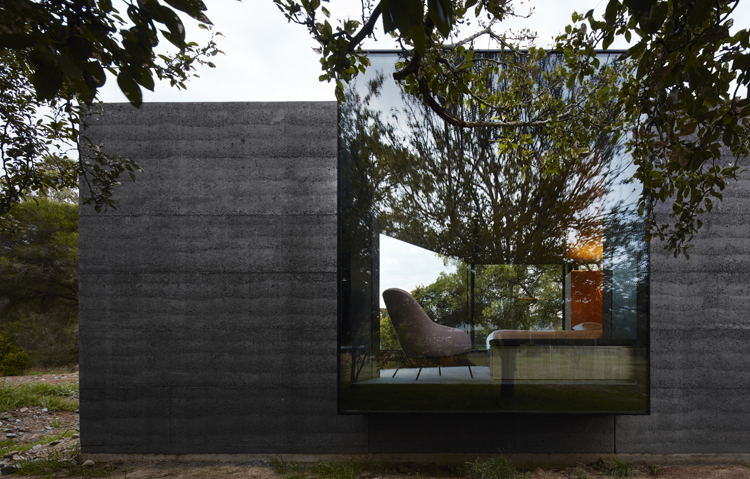 While the robes and bathroom areas are split into separate portions for function and privacy, the bedroom – where the building reaches maximum elevation above the ground – is the area where the previously individual zones come together as one space. The central joinery ‘forrest’ that previously divided the ‘his’ and ‘hers’ robe zones morphs into a low height bed head joining the space as one.

Built-in cabinetry skirts the perimeter of the bedroom enclosing the area with a series of informal seating and day-bed areas. A second and larger window box extrudes out from the solid rammed earth wall framing views of the fruit tees and stables beyond. The connection to the trees from the bedroom is more about being amongst the branches than beneath them and this is most apparent when standing in the large suspended window box or siting at the very point of the space, where the full height ‘cut end’ glazing slides open to the outdoors as you hang well above the ground and gaze towards the greenery beyond. 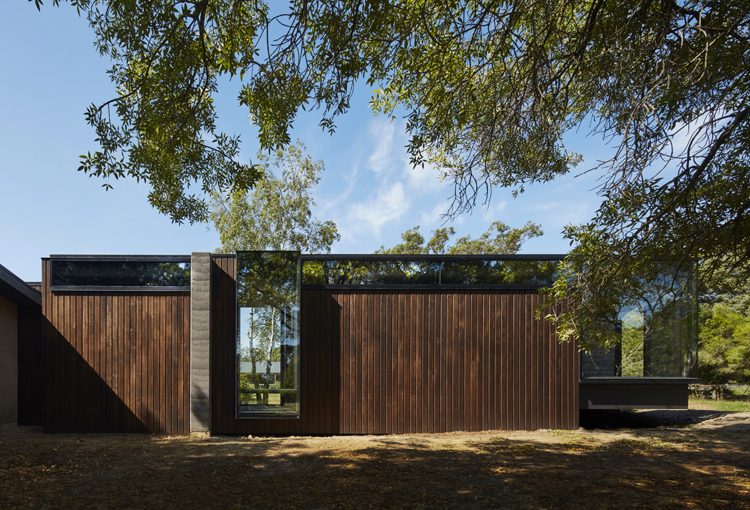 The external material palette of charcoal rammed earth, timber, steel and glass is purposefully natural and raw in response to the rural context, designed to weather and patina naturally, the building will continue to embed itself into its surrounds over time.

Internally the materials are of a similar aesthetic although the detailing is treated with a preciousness which gives the unpretentious materiality a sense of finery. 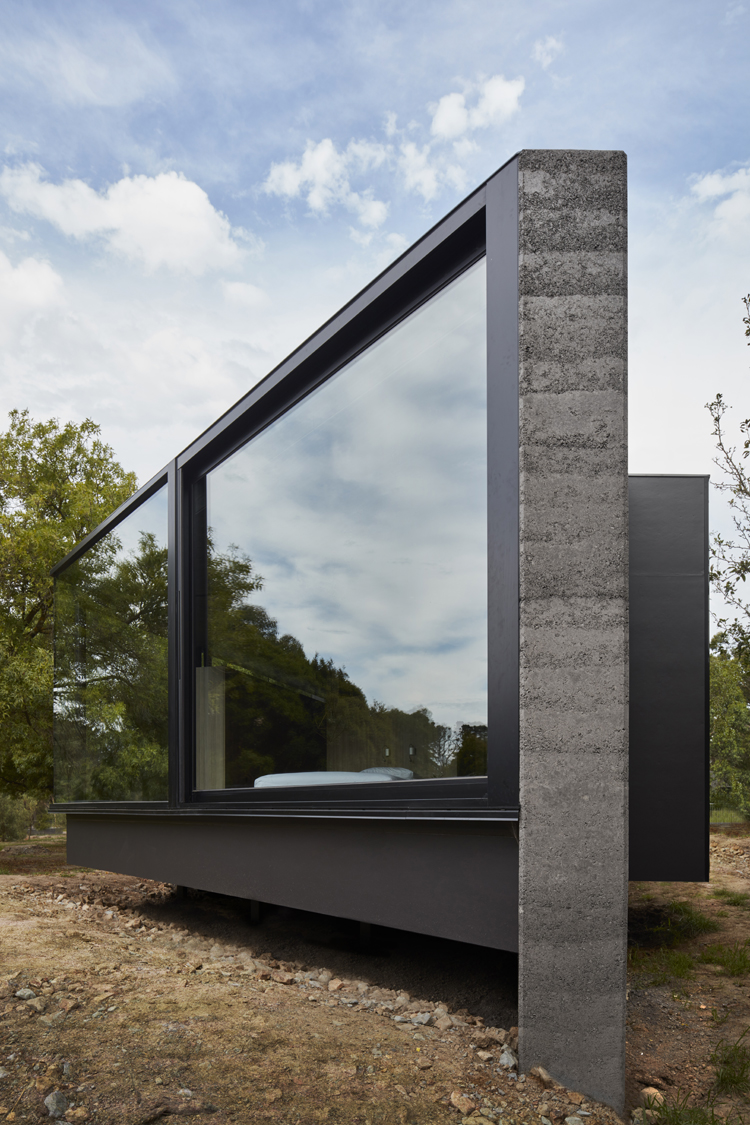 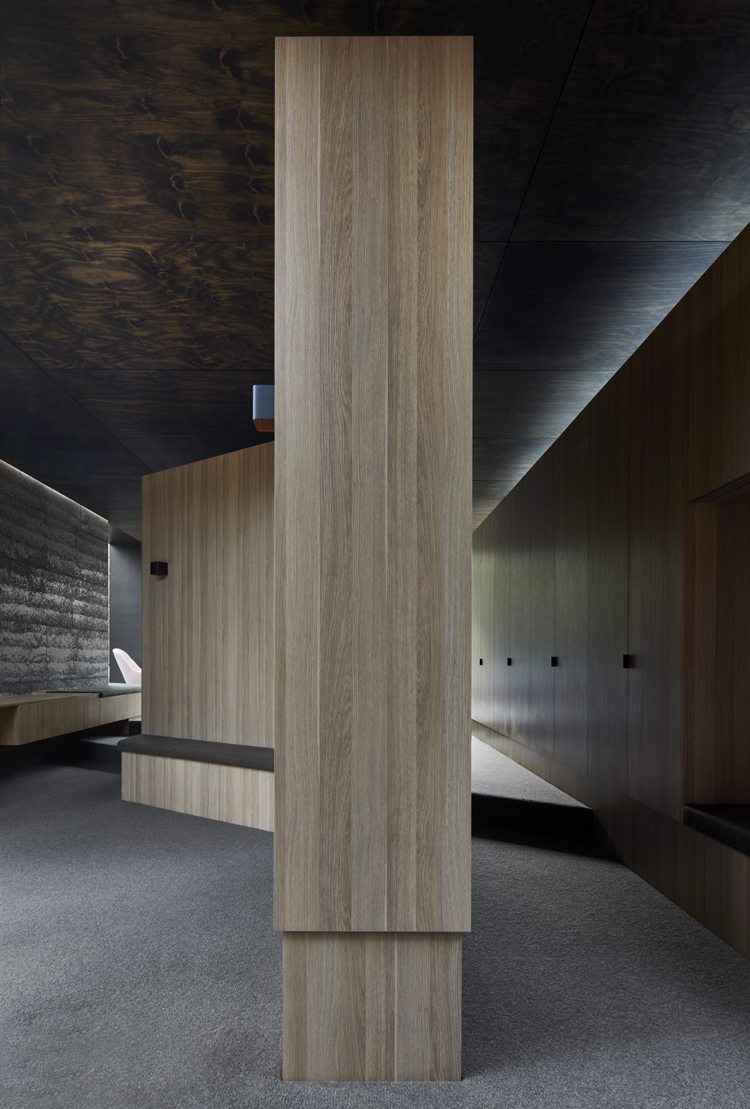 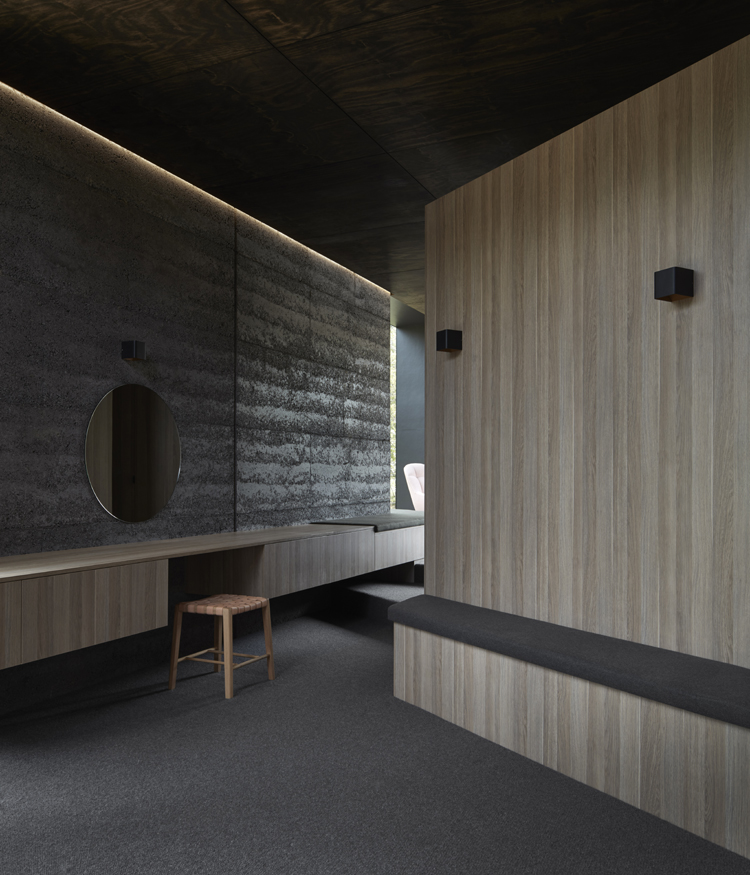 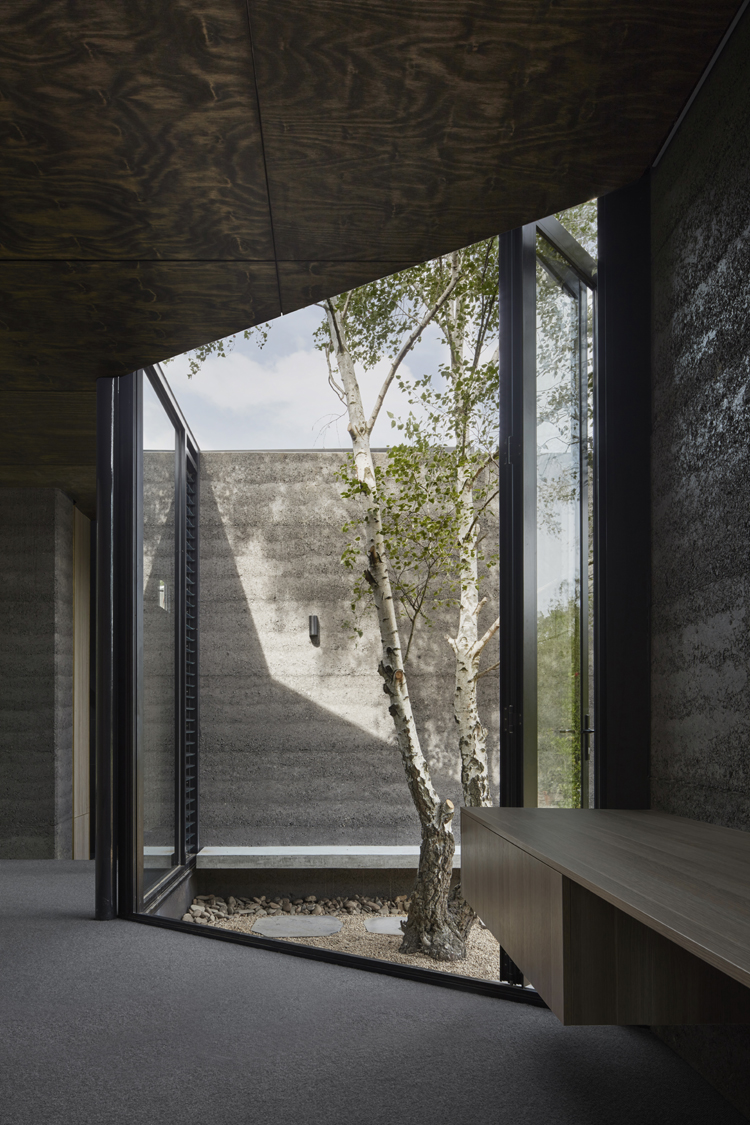 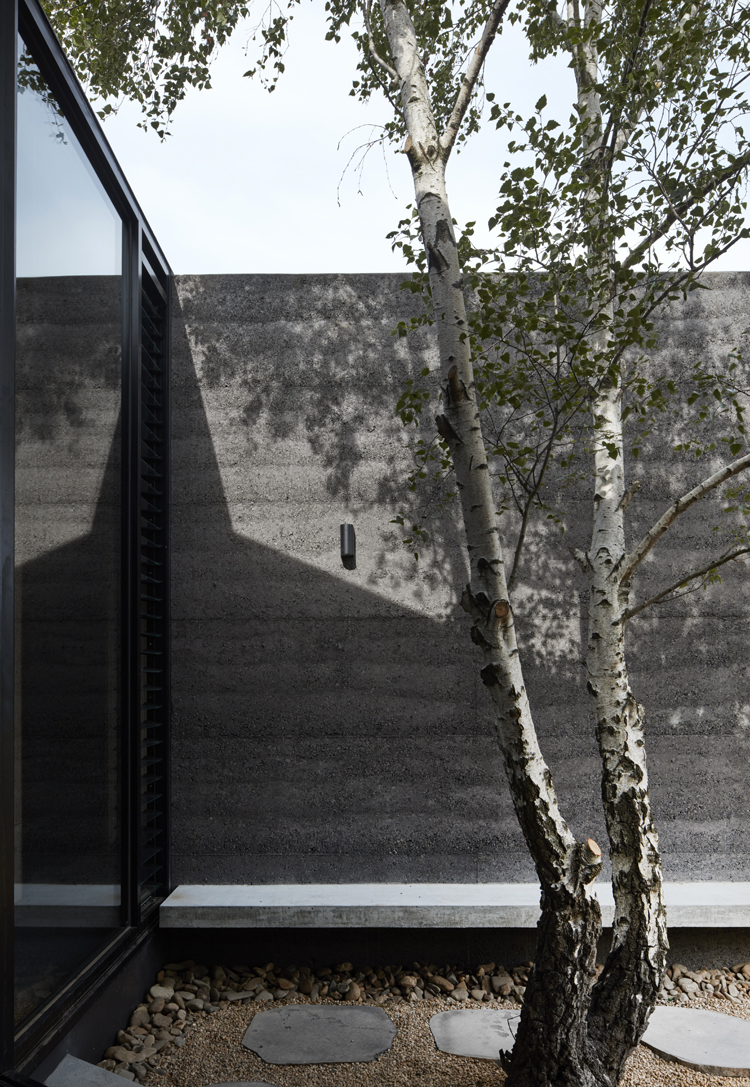 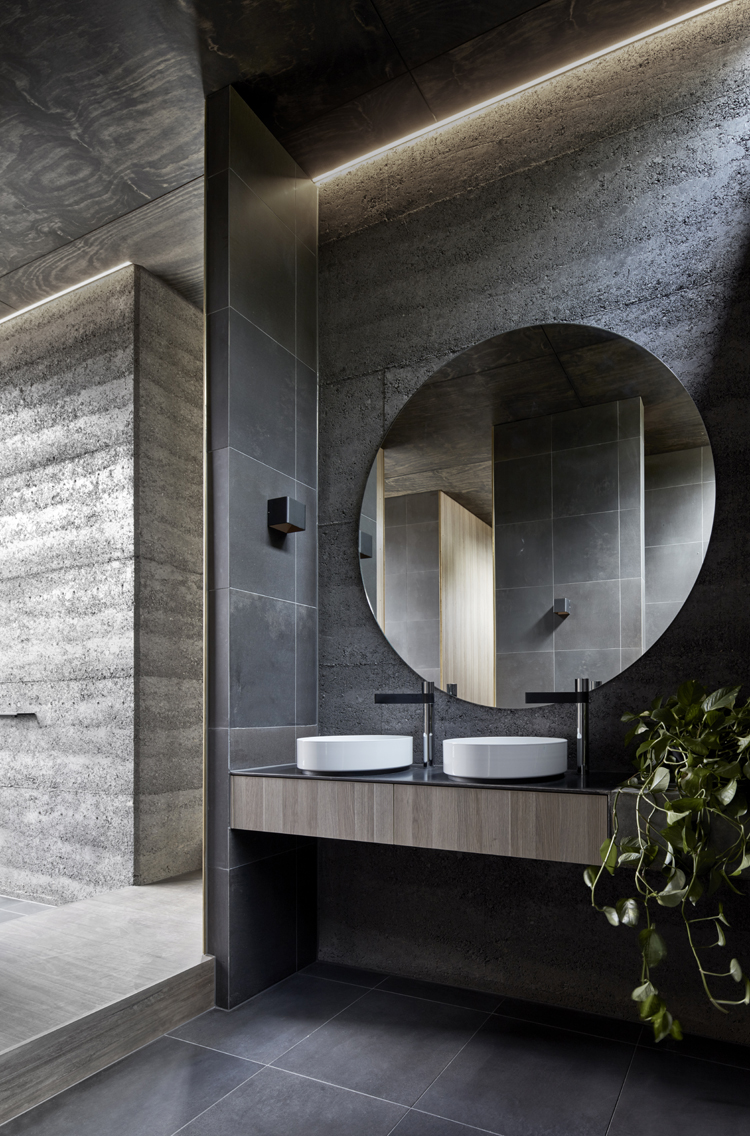 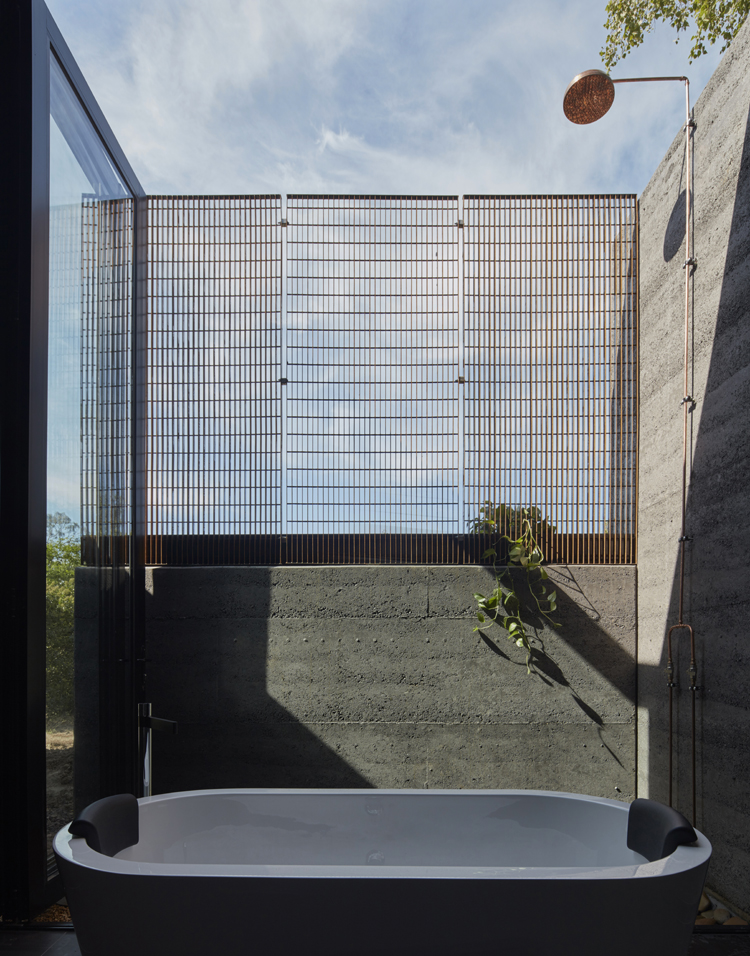 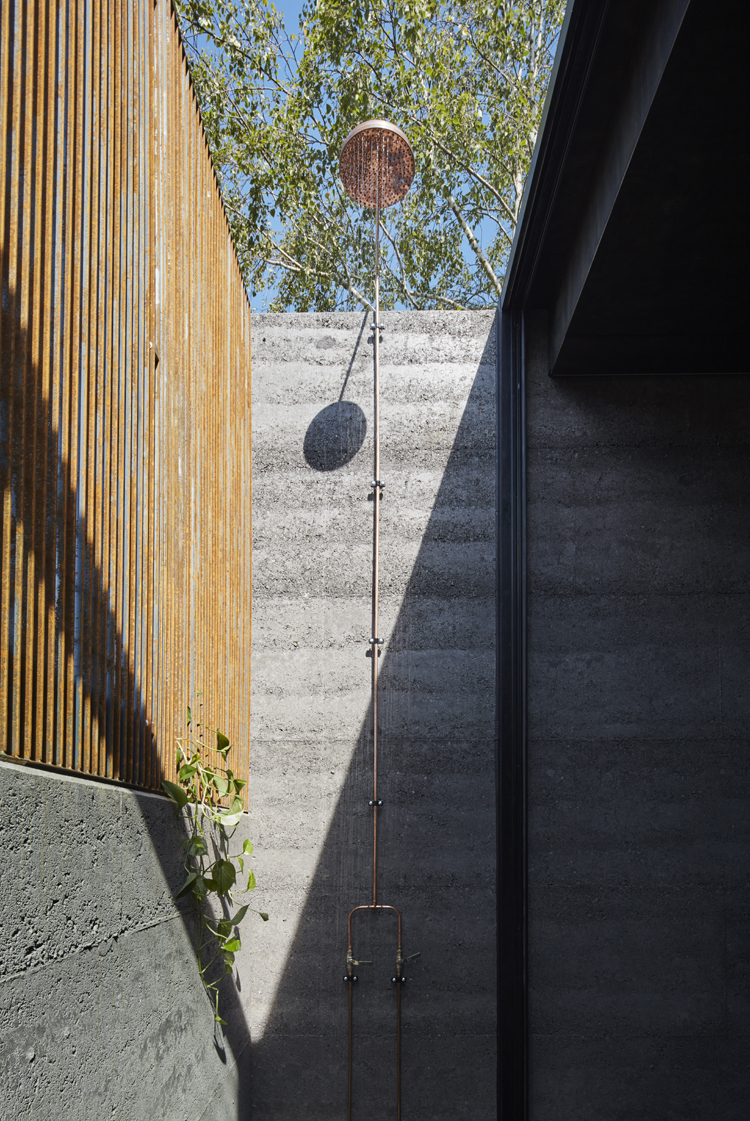