Greek architecture firm Kapsimalis Architects has designed these two contemporary holiday houses in the traditional village of Firostefani on the island of Santorini. Two old pre-existing cave houses, set next to each other and dug into the volcanic soil, have been reconstructed and used as residences for travelers. the leftmost house measures around 110 sqm and consists of a living room, kitchen with a dining area, a small bedroom with a bathroom, the main bedroom with its bathroom, a ‘shower’ area, a sauna, a hammam and a space for massage and relaxation. Even the second house on the righthand side offers comparable features with a smaller dimension of approximately 70 sqm. 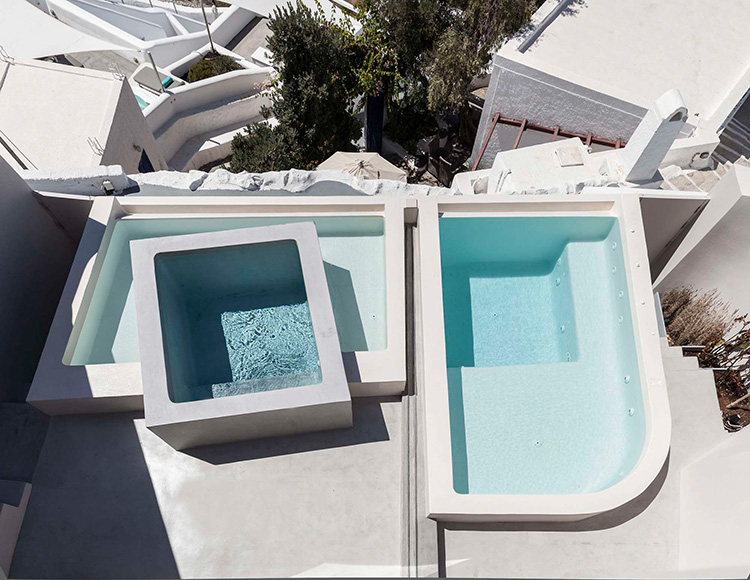 The intention of the project was to create two totally different cave houses, that are almost opposing to each other. The longer cave house on the left side has been designed as a primitive, minimal and sculptural space. Sharp lines and volumes are contrasting with the smooth curves of the cave house, creating an odd sense of the space. These tectonic volumes could be the leftovers of the soil removal from the cave in a more dynamic way shaping a kind of ‘’labyrinth’’. The use of similar color palette and materiality onto the floor and the walls forms a continuity of the interior space bringing out the curves and the random forms of the cave. The earth colors that are chosen, become darker and darker from space to space until the last room, that ends with a dark grey color. 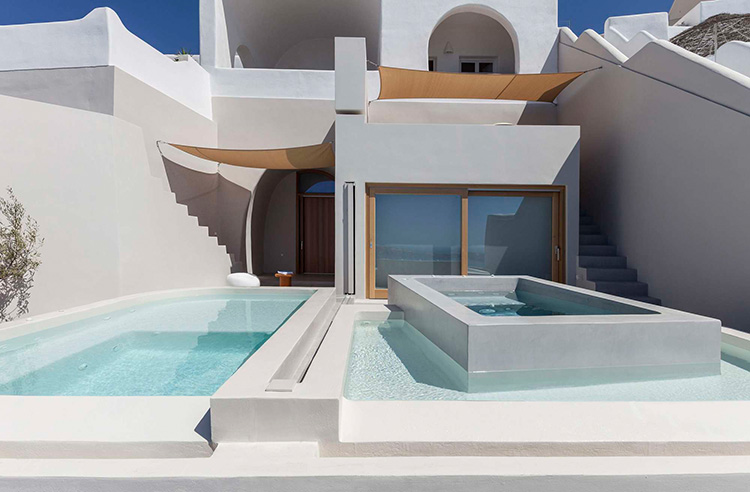 The curved walls in some parts are like thin layers of ‘’skin’’ that can be illuminated with a wide range of colors. Most of the furniture are built, in order to become part of that ‘cocoon’. The sensuous and mystical space is completed with some pieces of furniture by marble and wood, with diverse proportions and primary shapes.

The house also features a view to the volcano and to the bright scape of caldera, creating an antithesis between the darker interior space and the intense feeling of light of the yard. 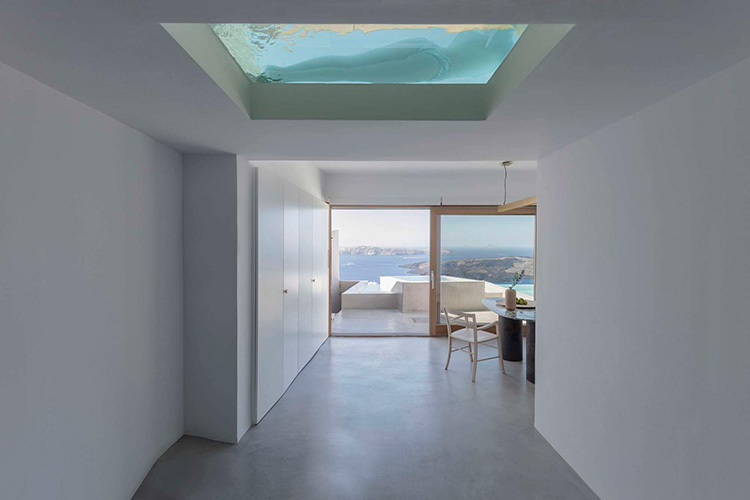 The second house has a different approach. The main idea of the design was to convert the old cave into a futuristic, innovative space, attempting to push the limits of the space to a breaking point. The marks of the cave are obvious, as the soil of the earth, as appeared through the excavation, is maintained. A construction of shady mirror, covers two of the sides of the main space, offering a different perspective to the space. Light and color effects inside the mirror create optical illusions, and luminous circular and rectangular holes that don’t exist in reality. A hidden video screen inside the mirror produces sounds and motion. 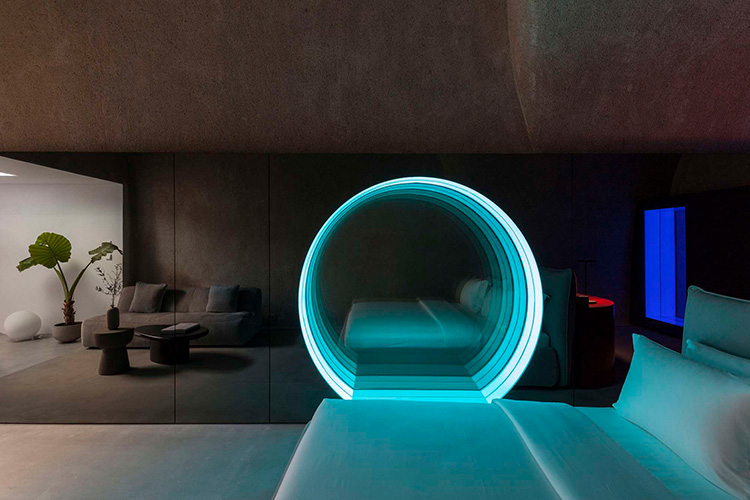 The wardrobes and the door of the bathroom is placed out of view, behind the mirror. The floor is made by rough, light grey marble, that strengthens the materiality and the texture of the old part of the cave. The extension of the house is a white box, that brings on its top a small pool. A rectangular hole on the ceiling reveals the existence of the water, giving a visual moving effect.

In the main space of the house, the bed is placed in the center, under the big vault, looking to the volcano view. Behind the bed a deep red furniture is used as a desk for preparing yourself. Marble, lacquered wood, metal and grey fabrics complete the palette of the materials. 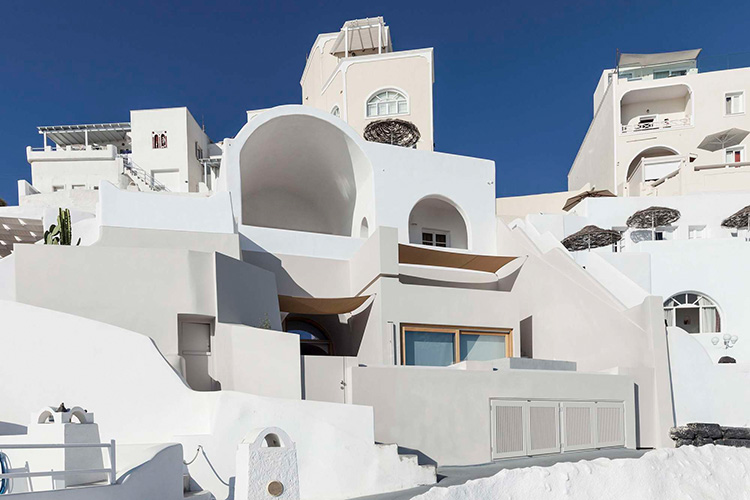 The openings of the two houses, made by wood, cover almost the whole façade of the building in order to bring the light and the view inside the space. At the same time the exterior summer life becomes a part of the interior space. The design of the holiday houses is totally integrated in the volcanic landscape and the cubistic architecture of Santorini in a more contemporary twist. 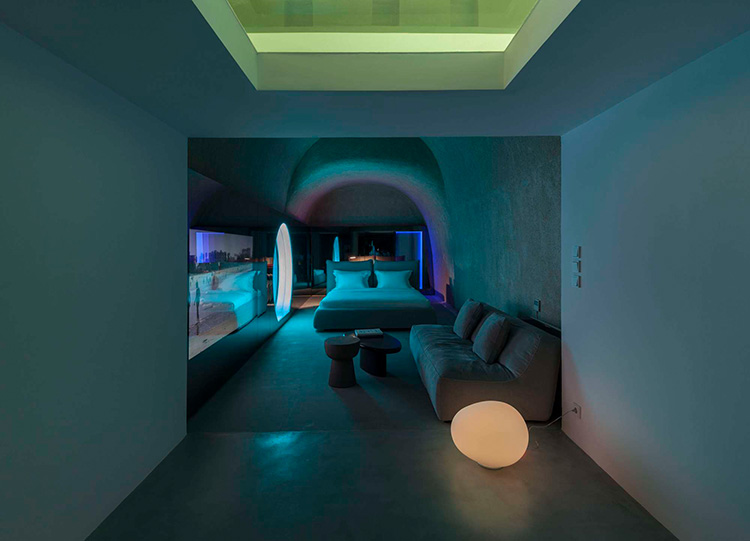 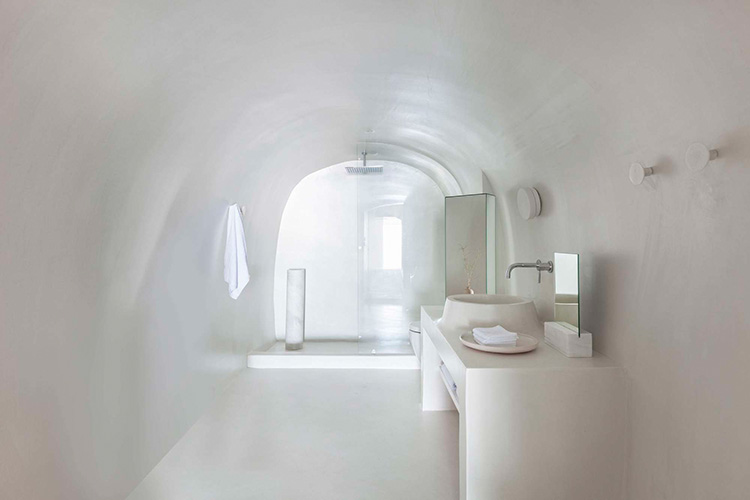 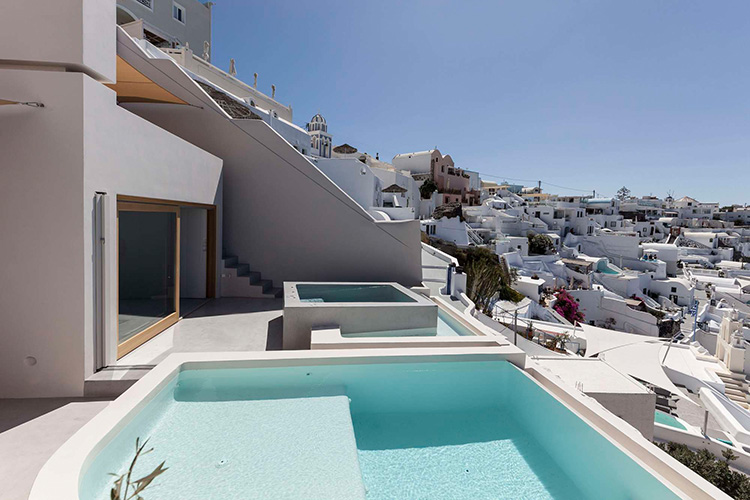 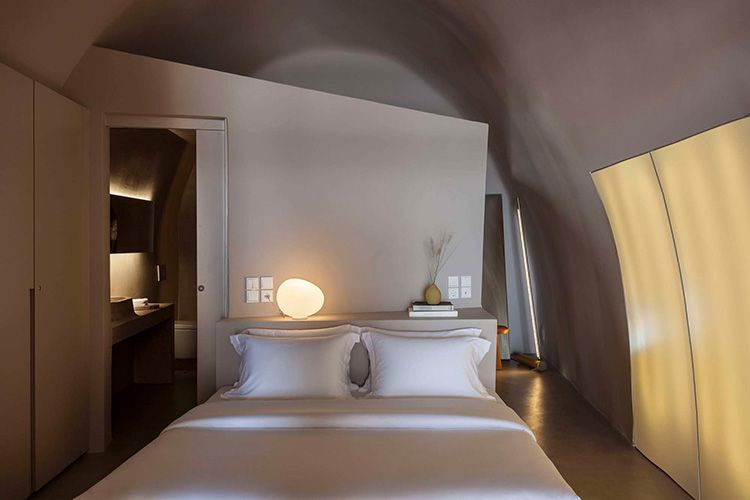 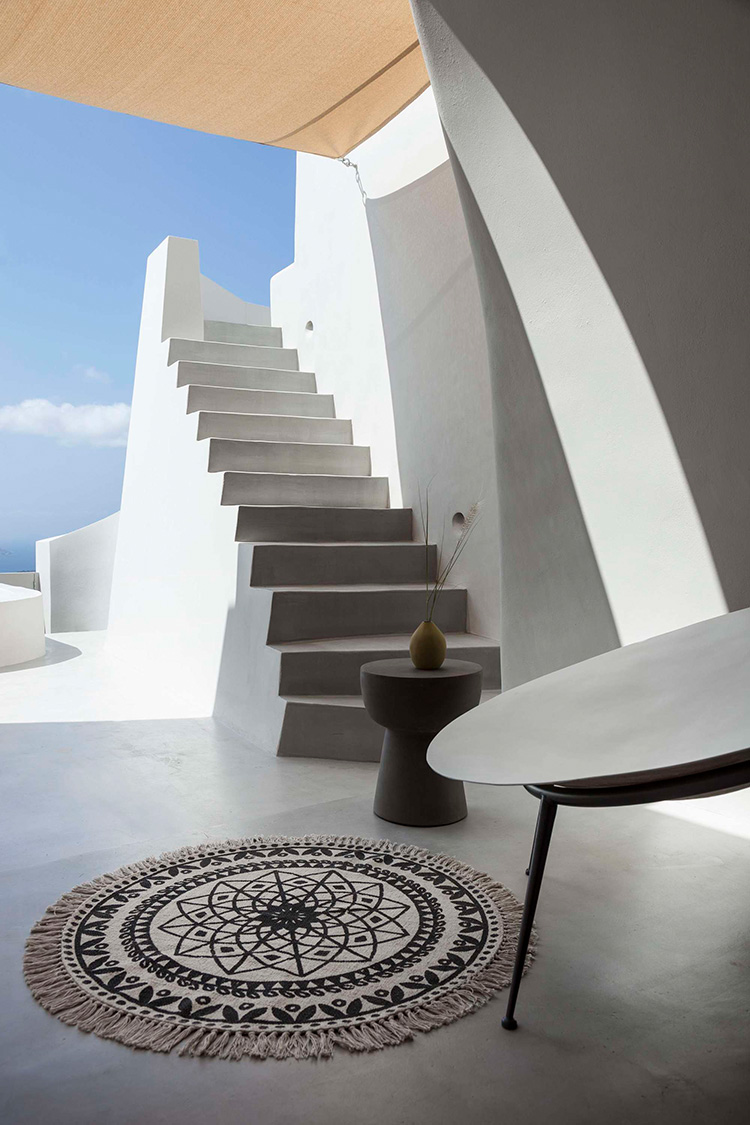 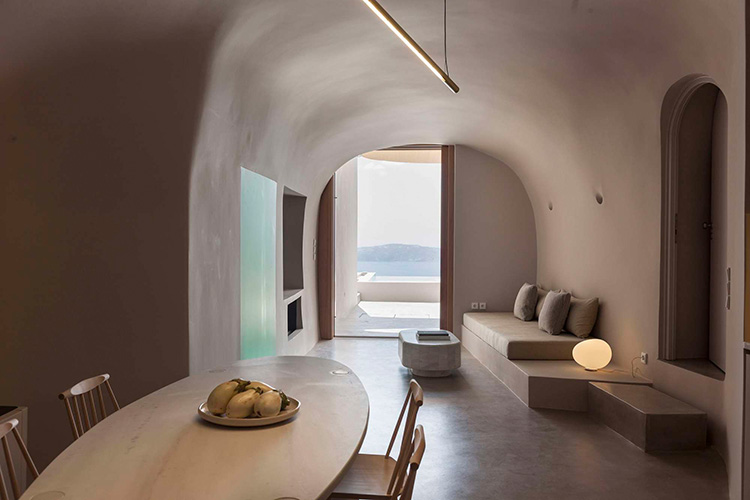 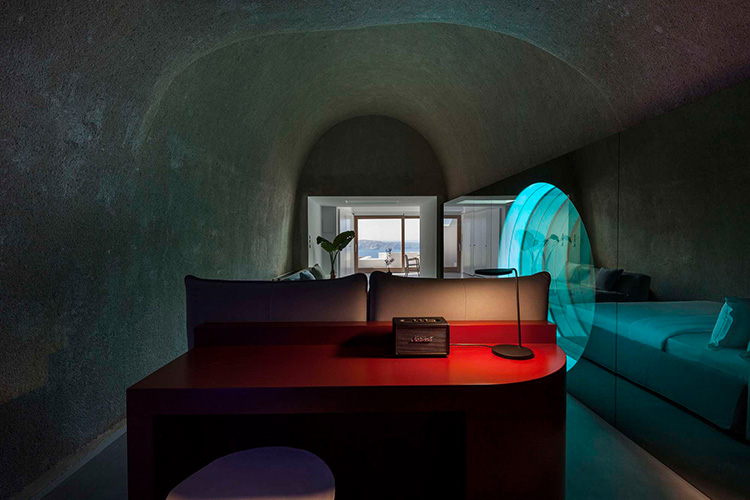 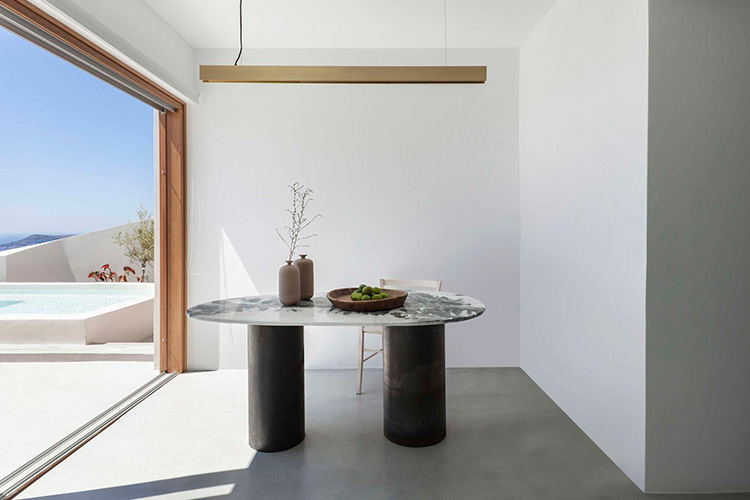 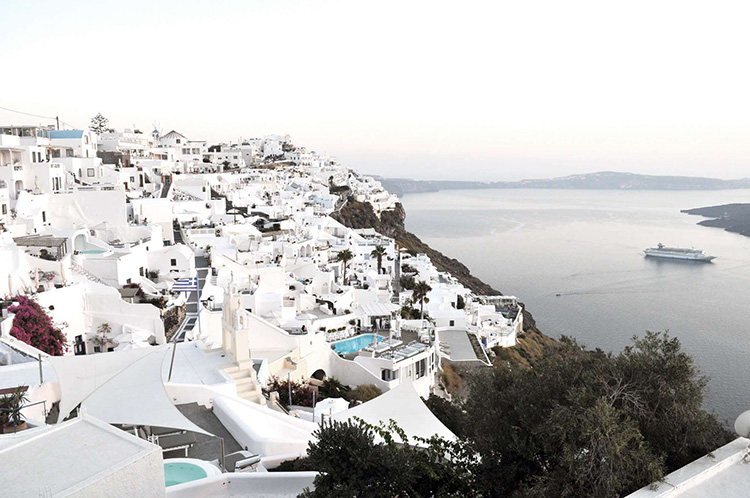