The design approach was to provide high functionality for everyday life while offering the maximum space; make the most of every square meter. This included having as much as comfort as possible for the night/private time. 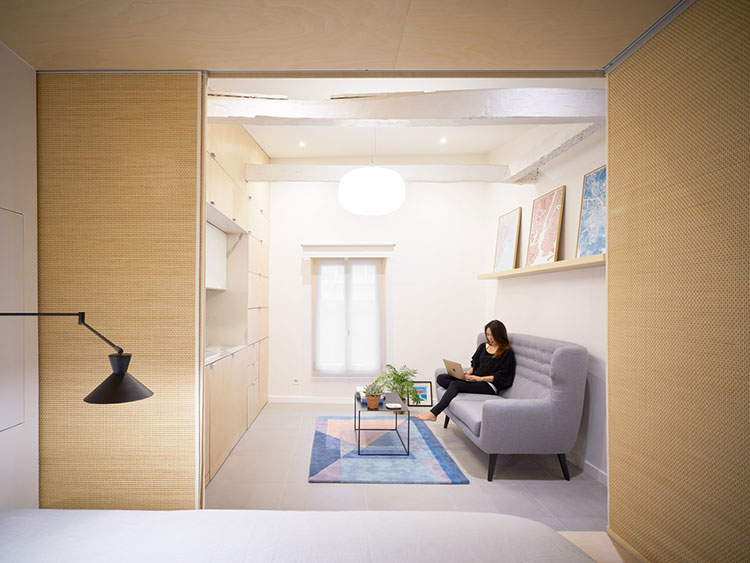 Since the sleeping area is the most important time, the bed was elevated on a pedestal, creating an area dedicated to relaxation, sleep, and intimacy. This approach refused any folding, rolling, or dismantling bed. Its presence is permanent in the room. The extra large birchwood unit on the upper floor works as an active wall in a dual configuration, vertically for daytime usages such as kitchen appliances, laundry, storage, tv, and multimedia while horizontally for night usage with its own discrete storage pockets. The active wall was built floor to ceiling following the roof’s original slope. The second extra large furniture on groundfloor absorbs the water tank and at the same time is used for first-hand storage, such as shoes, coats, and suitcases. 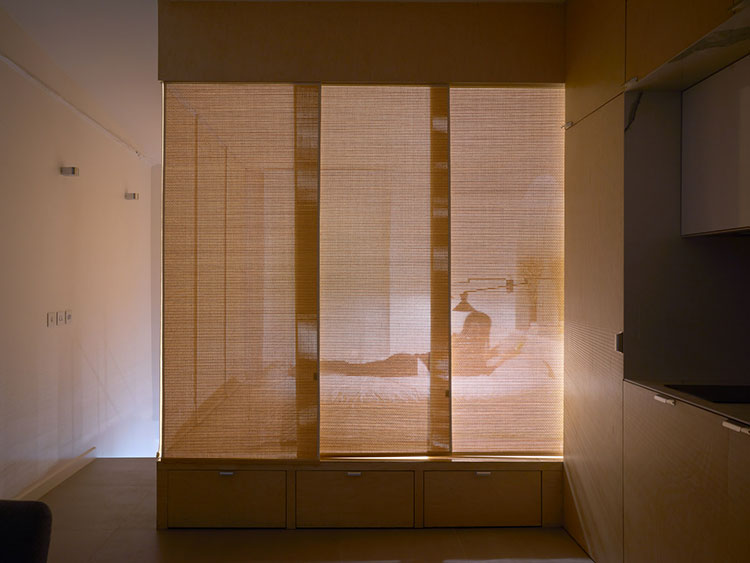 The duplex is situated in a 2 story townhouse building on Charonne street next to Bastille. The street was part of a former Charonne village where handcrafting and wood crafting where the dominating activities beside being a vast territory dedicated to the cultivation of vineyards and winemaking. The neighborhood was annexed to Paris in 1860. The building alone stands within Cité du Couvent which became after the French revolution a cotton factory. Today rue de Charonne is a very lively street composed of many shops, restaurants, and bars. 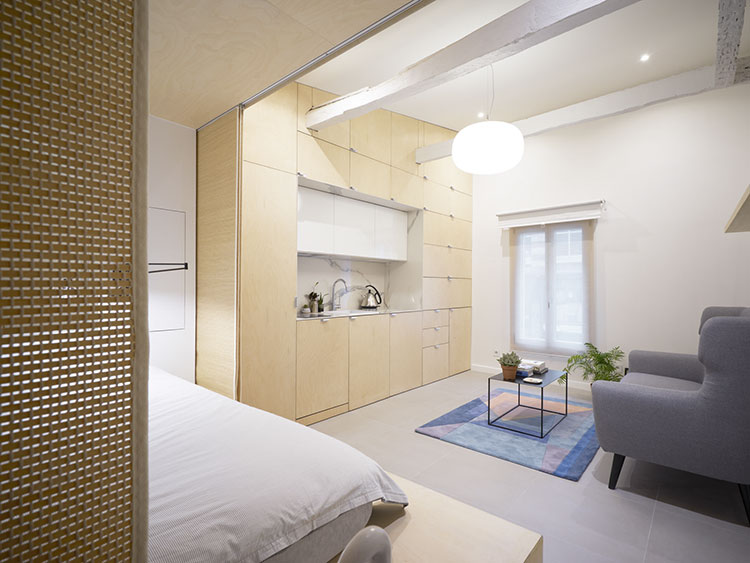 The light crosses the apartment entirely thanks to two large triple glazed windows allowing plenty of light to pour into the room. The entrance and bathroom are on ground floor whereas the living space is on the upper floor. The bed was placed on a pedestal which can be separated by six sliding wooden screens. This enables various configurations and hierarchy of privacy. When the screens are closed, reading, watching a movie, or having a nap turn the night area into a real urban cocoon. 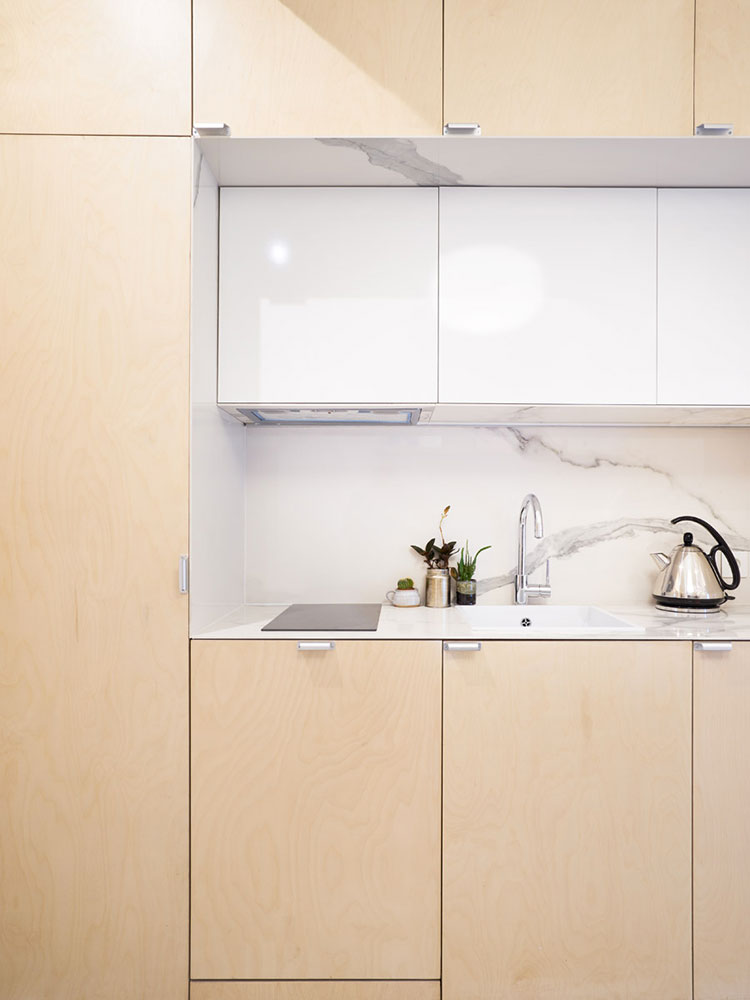 Open or closed the sliding screens dialogue playfully with the room and act like an elegant and subtle lightbox. This partition system makes the space flexible for different living scenarios. In addition to the screens, the elevation of the bed on a functional step helps to make a distinction between the day and night area. The urban cocoon enjoys a northwestern orientation, overseeing the pedestrian courtyard and keeping the distance with the street nocturnal brouhaha. 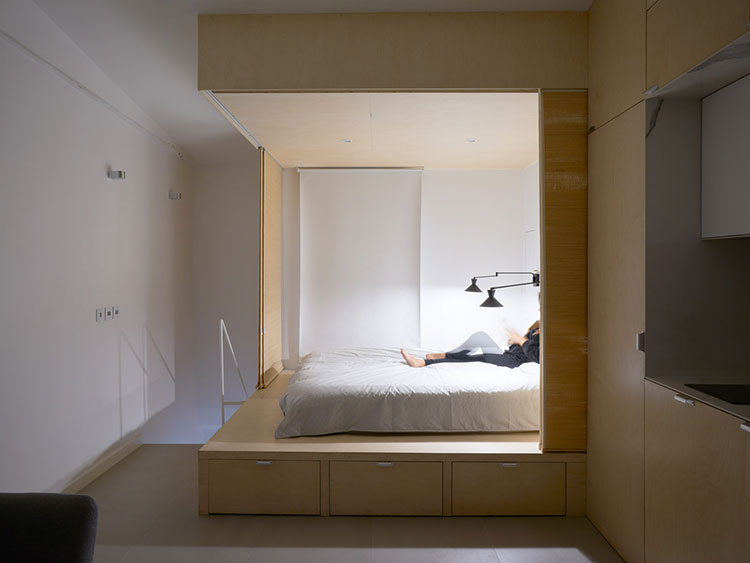 The dominating textures in the duplex are raw birchwood for the extra large storage units and raw tender koto for the woven wood screens. The birchwood furniture panels were carefully selected in Charonne’s remaining wood workshops. Light grey porcelain stoneware tiles were applied on the floor and the light cantilever staircase was entirely made of steel. 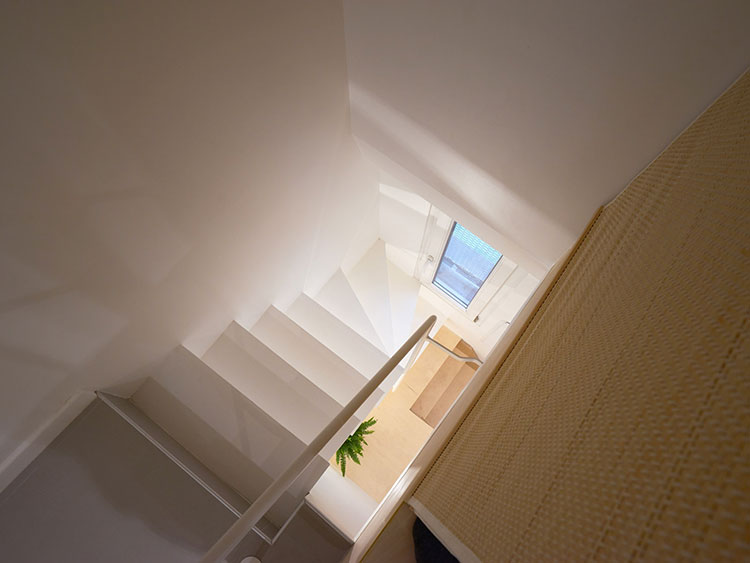 The renovation fundamental constraints were the very tight budget and the deteriorated situation it was. Moreover, the former display suffered from very low false ceiling panels, therefore one of the important operations included its complete demolition to reveal the room authentic height and volume. The roof’s slope was rediscovered as well as the existing wooden beams. As a result, the room widens up and reunited with its true personality. 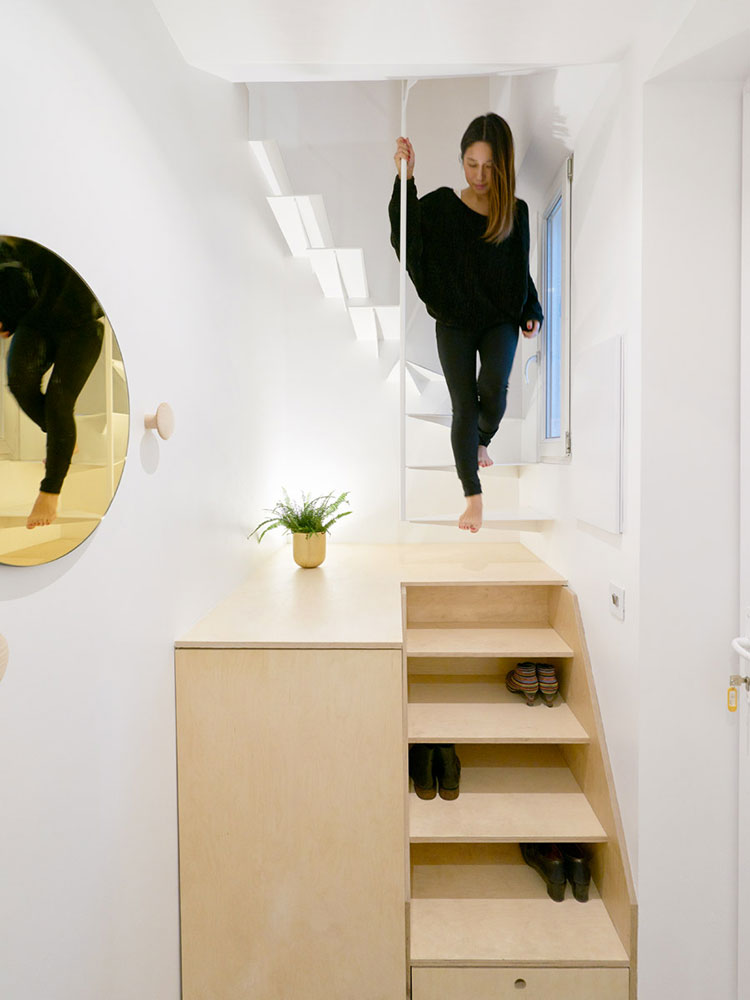