Who knew color could be structural? This unexpected, playful 34 sq meter studio apartment in Sydney’s inner-city Surry Hills, evolved through the designer’s distinct approach to design and has been transformed into a light-filled living space: living/dining area, bathroom, bedroom and effectively a ‘huge pantry that you cook in, rather than a very tiny kitchen’ as the designer calls it – all now carefully resolved and vibrantly realised with the use of blushing pink carpet and a foam green bathroom.

The apartment is the work of Sarah Jamieson, Director of the design studio Catseye Bay who approached the brief through her open-ended, exploratory art-based design process. Ms. Jamieson worked over a period of time in the space, allowing the studio apartment’s possibilities to unfold, and evolve, before taking those ideas through modeling and detail design stages. The result is delicious: beautiful, playful, strong and joyous, an antidote to the standard white-and-neutral solution designed to make small spaces look larger. 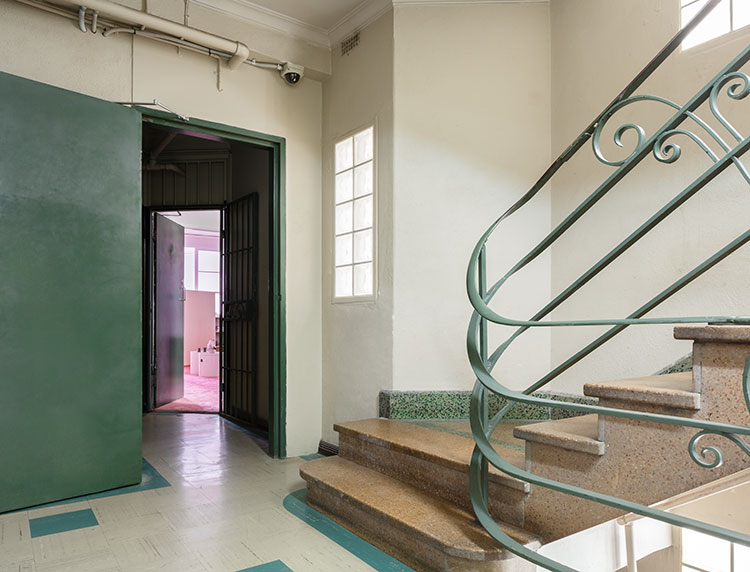 “I am intensely interested in the potential of things, particularly nuance that is not at first obvious. In my art practice, I start from the viewpoint that everything you need is already there – you just need to change the way you are looking at the space that you are in, or change your approach to things… I carry that way of thinking into my interior design practice” explains Sarah Jamieson. 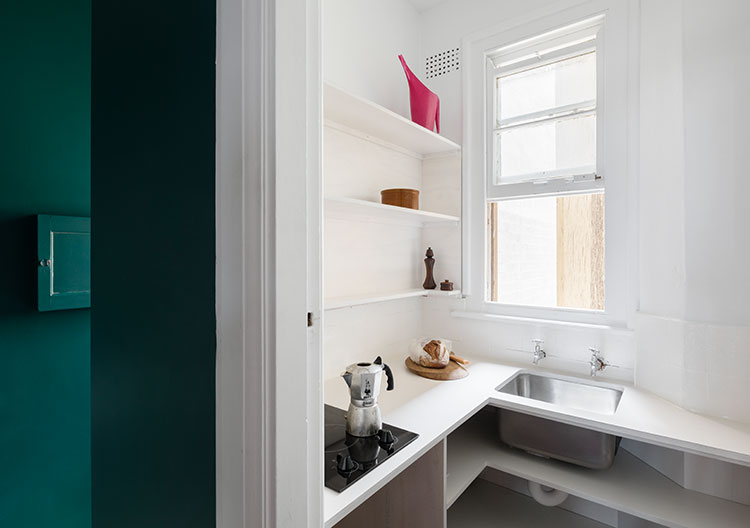 “I like things to reveal themselves slowly, over time,” the designer says. “So the way I approach the development of a project like this is the opposite of abstracting a space through a set of drawings. Rather I work by thinking ‘with things’ rather than ‘of things’ to design”, she adds. 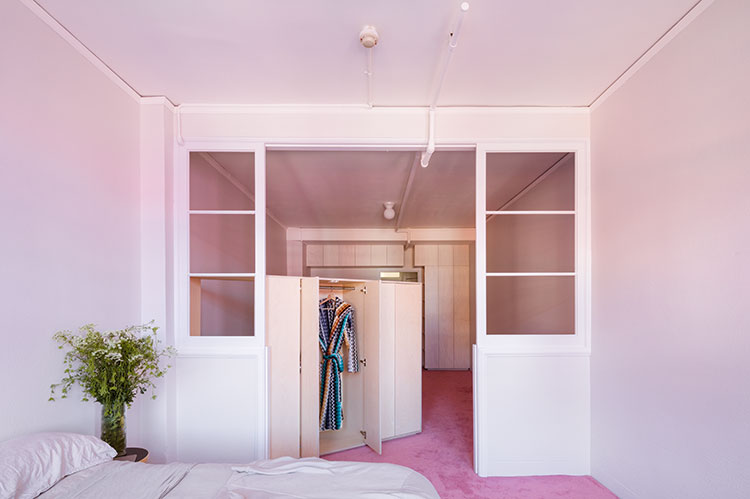 Instead of first working on a design on a screen, Ms. Jamieson tends to physically inhabit/work in the space, using actual objects and 1:1 prototypes. She then plays with/makes changes to the objects’ position and volumes, to see what happens… This allows the design to evolve and opens up possibilities for how the space can function. 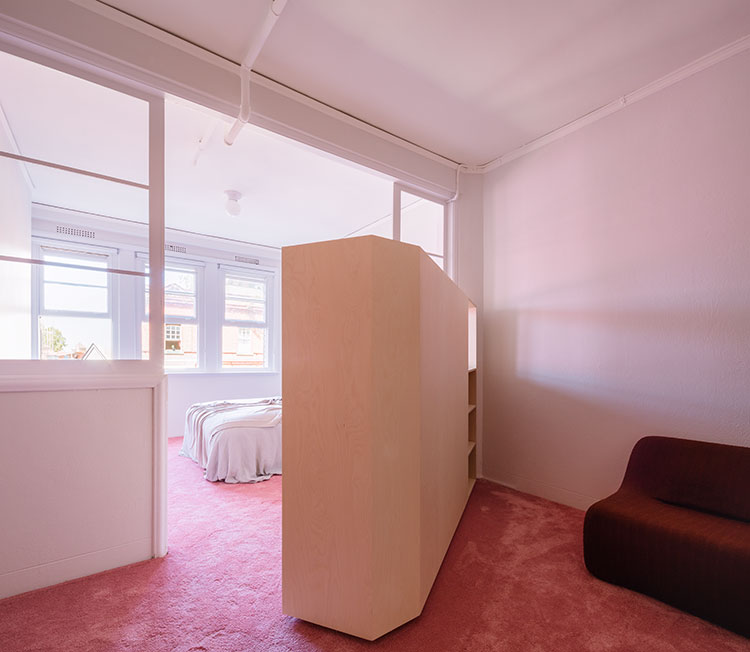 So, this is a design that was shaped by color. Sarah was drawn first to the incredible light in the apartment – the front facade is 60% windows, so there was beautiful light, bouncing into the space. However, over time it was not this direct light that interested her. Working in the space, she discovered that around 2 or 3 pm on a sunny day, the light bounced o the vibrant stripes on the building opposite, (a work by indigenous Australian artist Rekko Rennie Always is always will be, now ironically no longer there), and the apartment was flooded with sublime pink and blue reflected light. This began to unfold nuanced ways of working with the space that were beyond the obvious and physical.

“So, for example, the pink floor plane is more than simply a use of colour: it responds to the reflected light, and starts to create a particular shape, and then the joinery starts to play with that and work into that.. so you could say the colour is structural”, she says. 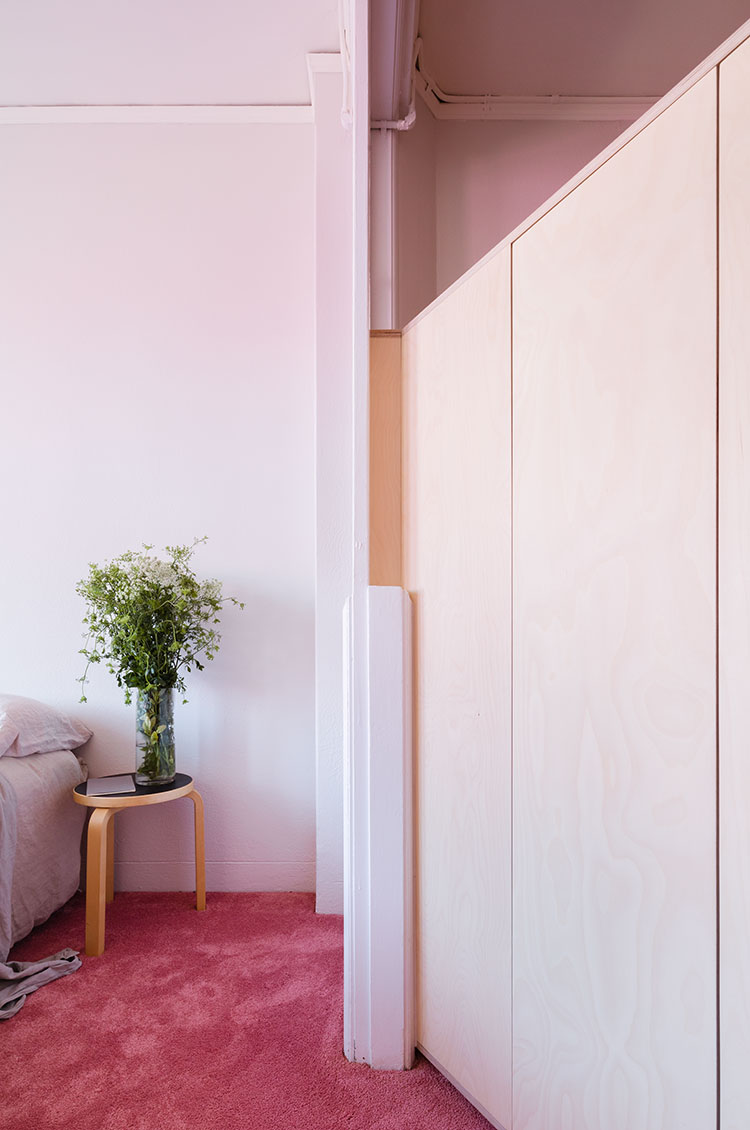 The challenge was to make the studio function like a one bedroom apartment, without shutting down the space, or – particularly with this apartment – di using or blocking the light. This design makes use of bespoke joinery to carve out volumes that ‘borrow’ space from each other, functionally and visually, accommodating multiple uses, sight lines, separation and flow between areas.

By placing the wardrobe/storage unit diagonally across the space, the design allows the light, sight lines, people and functions to flow around it, maintaining the openness of the plan. A secondary factor was that the Art Deco apartment originally only had one power point – so power is brought to the other room by that piece of joinery. 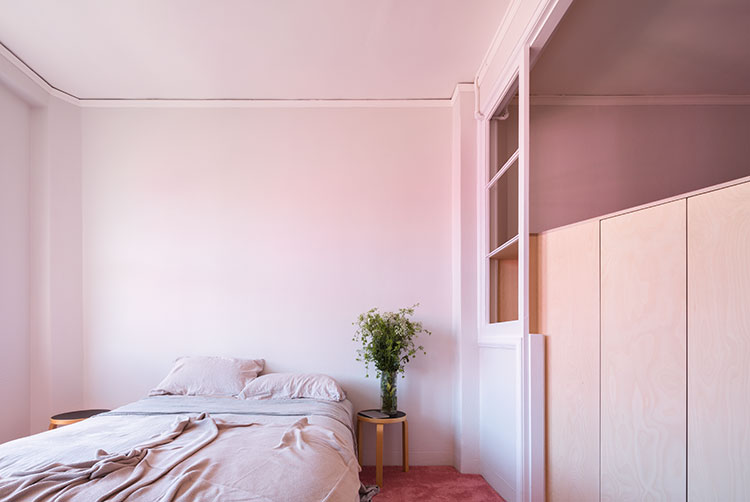 The bathroom pulls the deep green foam tones of the hallway into the apartment, to create a relationship with its context. The kitchen is tiny. It is conceived it as a “big pantry that you cook in” rather than “an incredibly small kitchen” says the designer. “We put a door on it and used all exposed shelving, inserting a bar fridge and 2-burner stove – it really is like cooking in a huge pantry..”. Once a tiny studio, now the apartment feels big, filled with color, light and potential ways of living. All achieved on a minuscule budget using ‘everyday’ objects, materials and finishes with 60% of the budget going into bespoke joinery. 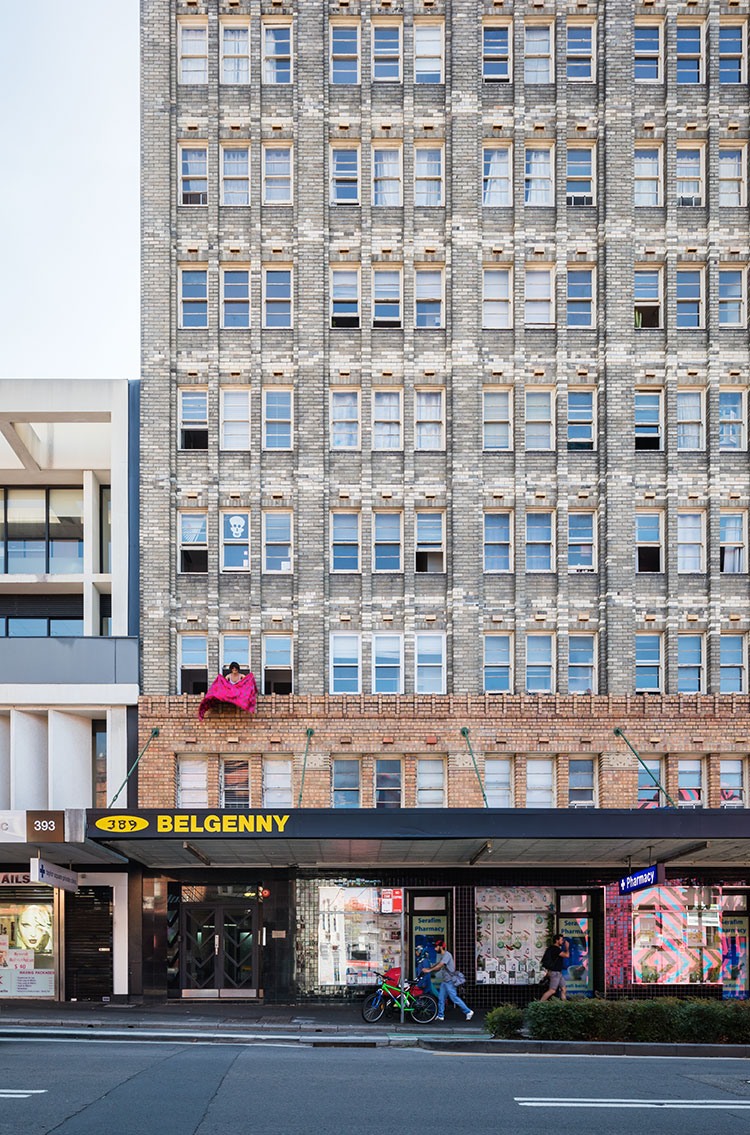