Austin Maynard Architects has refurbished an original Victorian-era house in Melbourne, Australia. The design of Kiah House focuses on the concept of creating a ‘sanctuary’ and ‘home-office’ for the family while integrating outdoor areas with the inside of the home.

Kiah House is an addition to a weatherboard cottage in North Fitzroy, Melbourne. The extension comprises two separate pieces of architecture, the master bedroom ‘haven’ – which sits beside the original house extending to the northern boundary, and the separate office poised above. The original Victorian-era house, built in 1927, has been respectfully restored and updated with a new kitchen and bathroom.

The owners, Angela and Rahul (and their three cats) had a clear idea of what a home meant to them – “a sanctuary”. They wanted a light and airy house, with a “strong and positive vibe”, to entertain friends and family and also to relax and meditate. Influenced by Japanese gardens and the Buddhist retreats of Kyoto, the design responds to the client’s desire for peace and mindfulness. 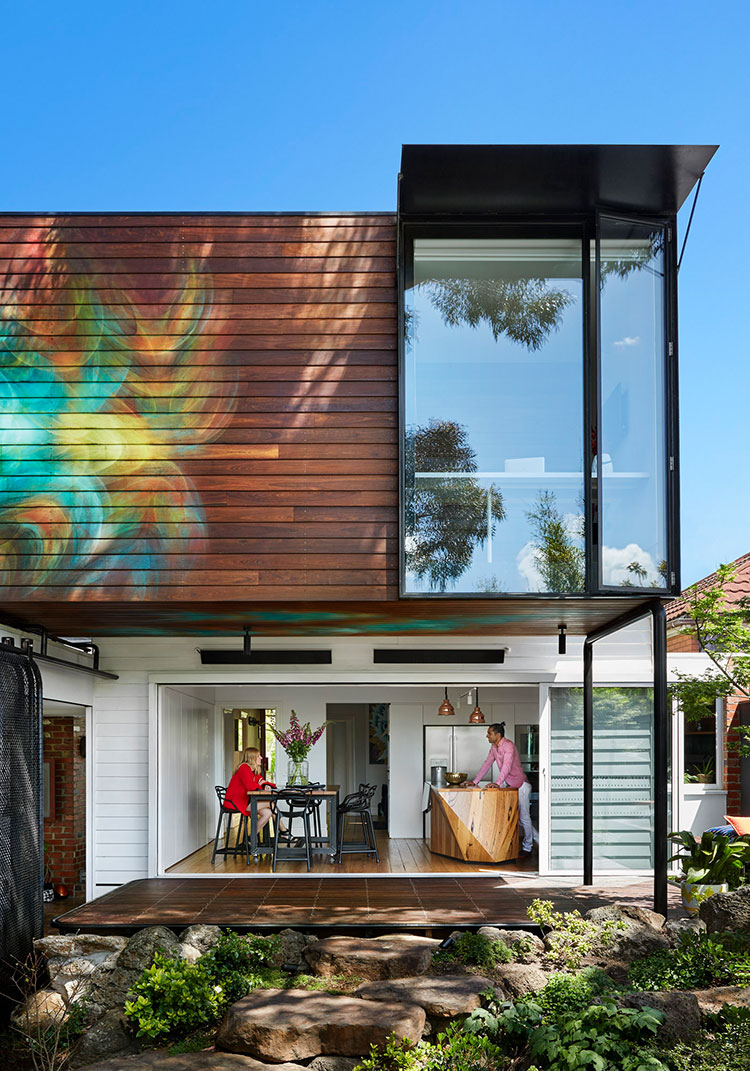 A bedroom can be far more than just a dark space at the quiet end of your home. A bedroom can be a contemplative, meditative space that at one time is wrapped up cozy and tight in layers of beautiful heavy curtains and then open to the outdoors the next.

“At Kiah House, we were charged with the task of creating spaces, both private and shared, that spill out into the garden and yet adaptable enough to create solitude and privacy when needed,” explain the architects. 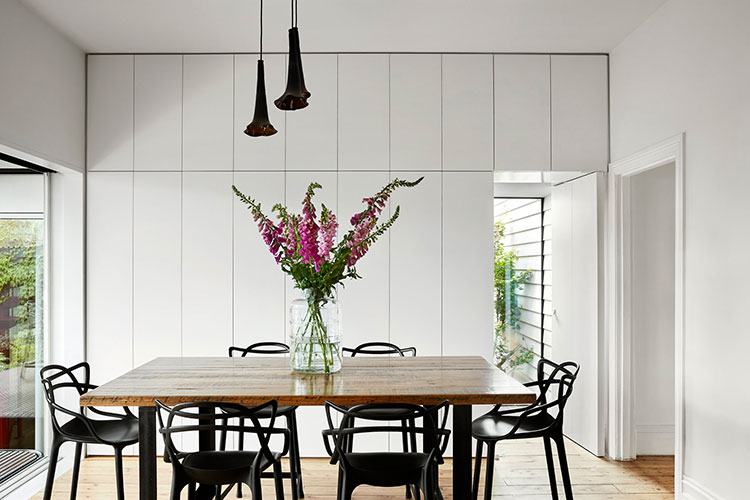 The master bedroom ‘haven’ has a dedicated Buddhist prayer space and opens up to the garden and ponds via sliding double-glazed glass panels blurring the lines between inside and outside. The towering lemon-scented gum tree is enclosed by a small deck area, a place for the owners to “sit and meditate”. 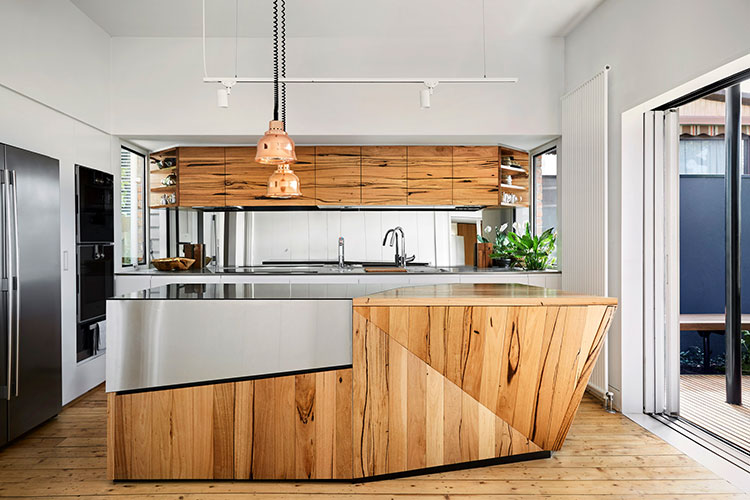 The roof of the retreat is turf, covered in plants and edible vegetation (Disphyma Crassifolium) to provide an abundance of insulation as well as creating a buffer in the event of falling gum tree limbs. Accessed via a modest ladder, the green expanse also means the study is not overlooking a dull roof, instead, Rahul looks out on a thriving roof garden. 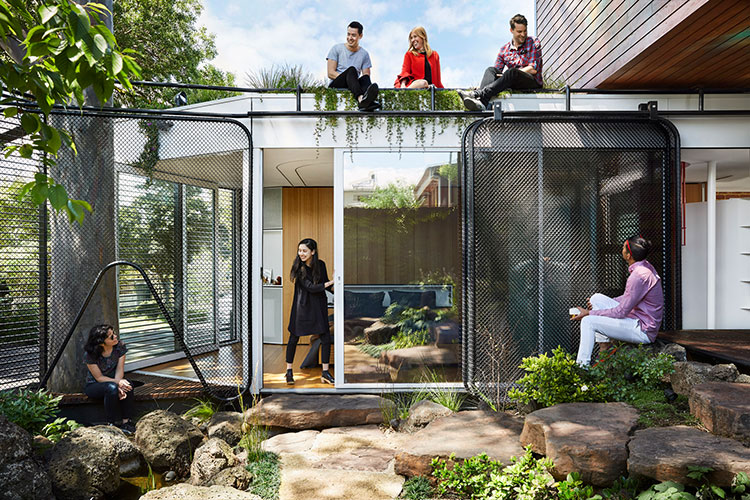 Kiah challenges the suburban binary of the ‘front yard’ and the ‘backyard’. In this small enclave of North Fitzroy, an unusual road layout has led to some houses having two street frontages at either end of the block. At the rear of Kiah, high fences and ugly garage doors dominate the neighbours’ houses, while across the road, on the northern side, old weatherboard homes form a traditional street front.

“We found the defensiveness of the rear elevations to be odd,” says Austin Maynard Architects. “We decided that the backyard should be a second front yard.” 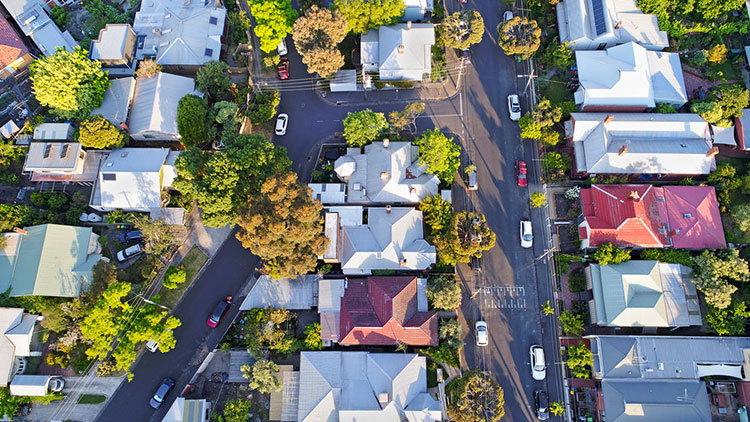 Kiah engages with the northern street and the northern neighbors. The new deck is elevated enabling views and interaction with the street. The new bedroom retreat faces directly onto the street, with operable louvers that allow Rahul and Angela to connect as much, or as little, as they wish. The new bamboo fence allows view and light between the garden and the street. A pedestrian gate creates a new ‘front door’ to the northern street where previously a high and defensive fence turned its back. 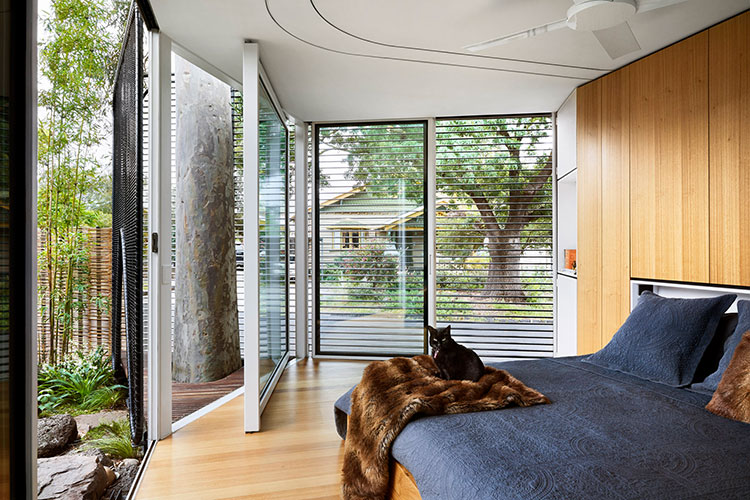 “The kitchen table or an awkward corner of the lounge is not a productive or feasible way for many Australians to get work done at home,” adds the design team. “A dedicated workspace is required. But does this mean that we need to dedicate a spare bedroom to office space? And how do we create a clear separation between work and life? How do we isolate or escape the stresses of work if it has a permanent presence in our homes?” 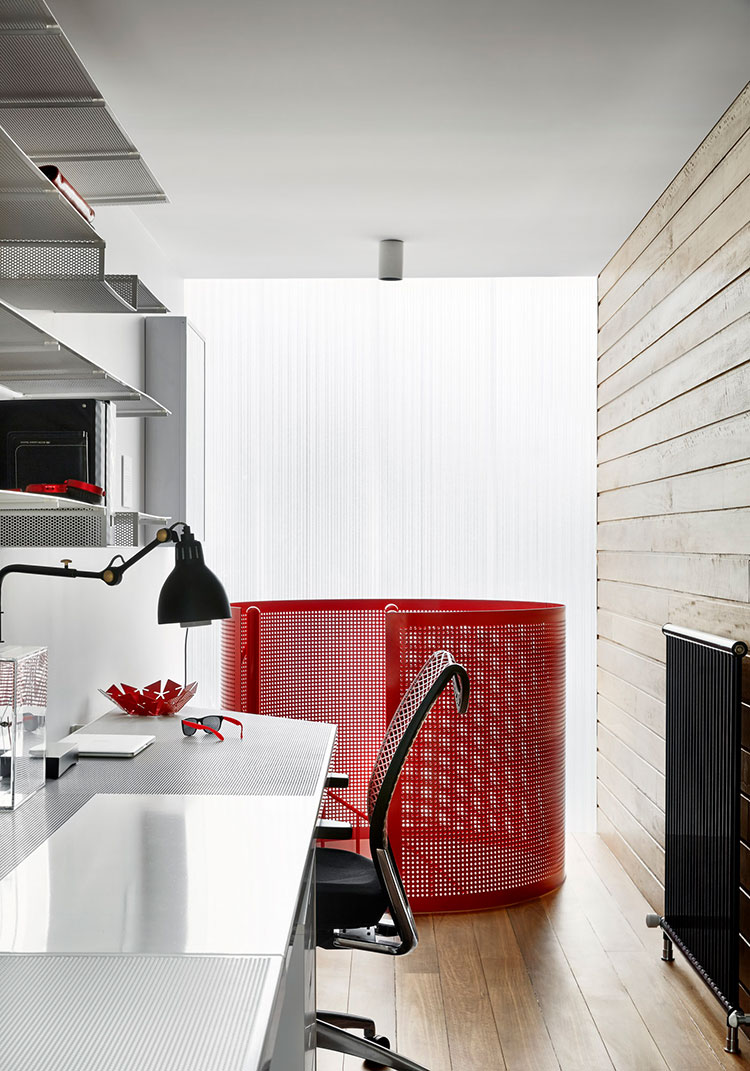 Rahul is a filmmaker who enjoys working from home. Rather than opt for a study nook or a converted shed in the back garden, he asked for a dedicated place to work in each day. Elevated above the original house and accessed via a spiral staircase, Rahul’s office provides a very different spacial experience to the rest of the house. The office sits above the deck, up in the canopy of the gum tree, with elevated views of the dense green roof of the master retreat and beyond. The office is long and narrow, lined in timber, with perforated steel shelving. Like all of the newly built spaces, Rahul’s office looks out onto the garden, yet this space is elevated and feels separated and private. A different space for a different household function. 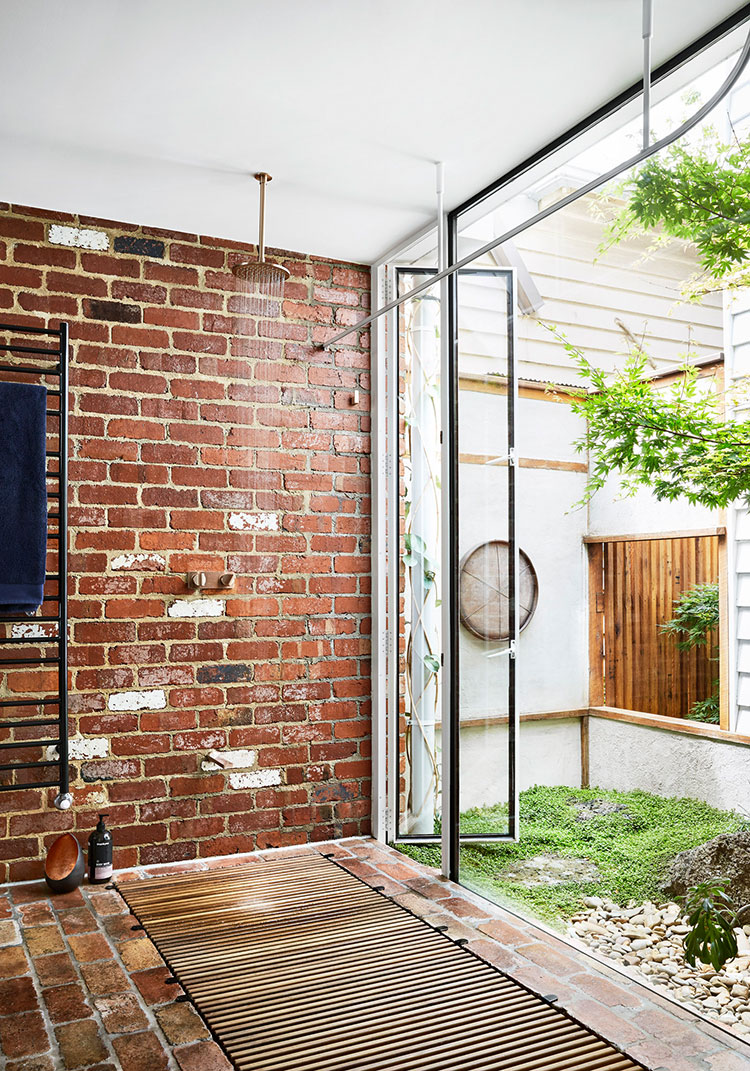 The bathroom at Kiah takes you to a different place. The sunken brick bath, big enough for two, has an earthy character similar to the ancient Onsen. A strong connection to a small private garden, created in the gap between the new addition and the old house, offers a relaxed feeling of bathing within the landscape. The bathroom leads up to the kitchen via a secret passage, concealed behind cabinetry. 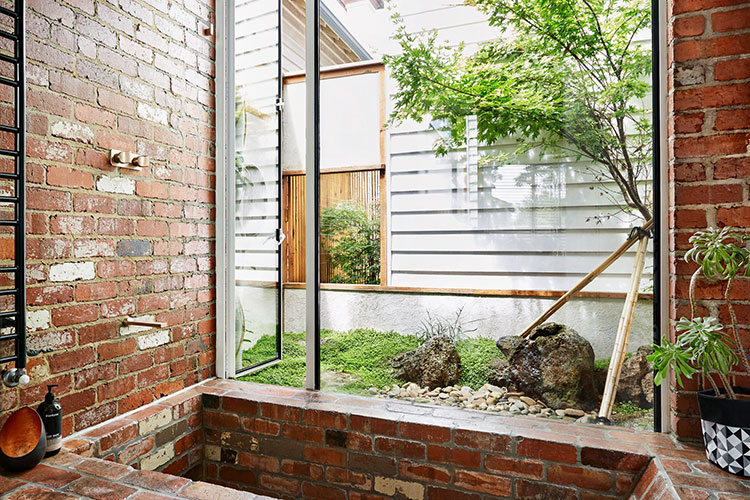 The large island bench is the focus of the kitchen at Kiah. Angela is a passionate cook who loves spending her free time creating modern gastronomic dishes. She wanted a high functioning kitchen with double ovens, zip taps, sous vide and custom-designed storage space that could be cozy and intimate from day-to-day, yet could also open up for entertaining large gatherings. Importantly, this is not a typical island bench, this is a sculptural highly crafted piece of furniture. Half-timber bench top, half stainless steel, it is both homely and commercial. The back of the bench top flips up to give extra practical kitchen surface when needed. 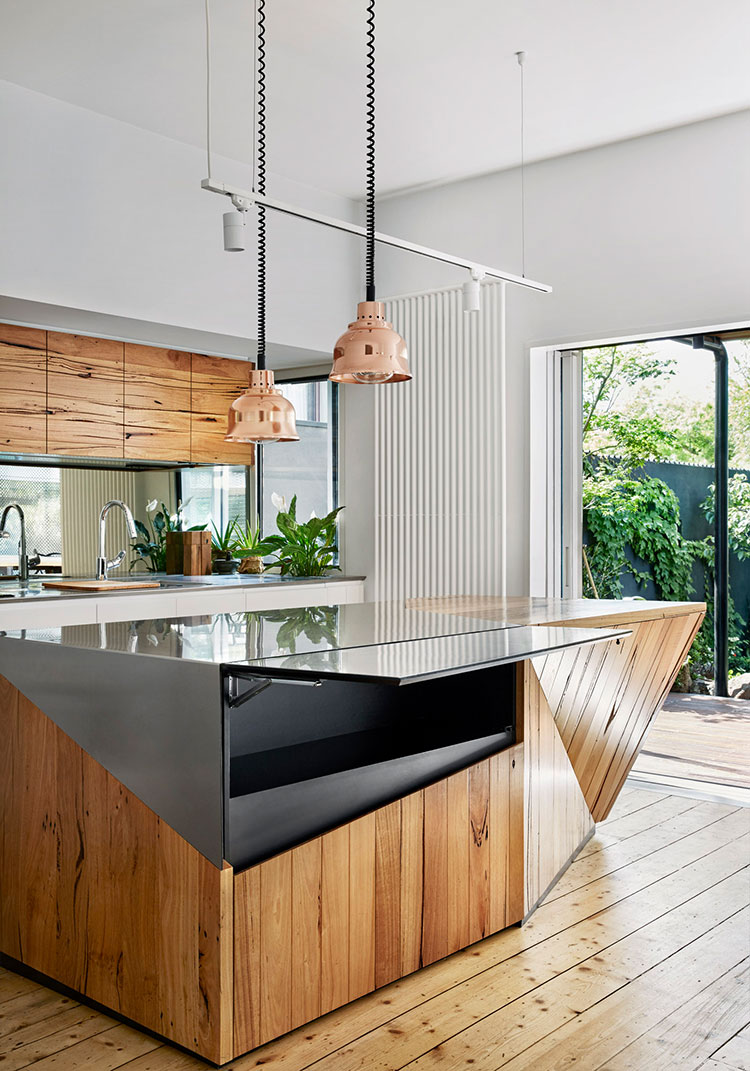 The mural on the side and underneath of the timber lined office is called ‘Awakened Flow’ by Seb Humphreys (aka Order 55). The artist has responded to the rich gardens and the peaceful nature of the home and its occupiers, to create a gentle explosion of color that contrasts beautifully with the spotted gum cladding.

“The mural seeks to bring forth the innate power within nature. By using the soft palette of the underlying woodgrain, the wood is reimagined as a container of hidden information that is emancipated from its dormant locale within the structure,” explains Seb Humphrey’s Order 55. “Once released this energy transforms; expanding as it morphs into lighter fluid aqua shades and then is released back into its original confines. To me, this draws many analogies to the story of the house, the birth of a new space, The home taking a breath and expanding its rib cage as it fills itself with a renewed sense of being.” 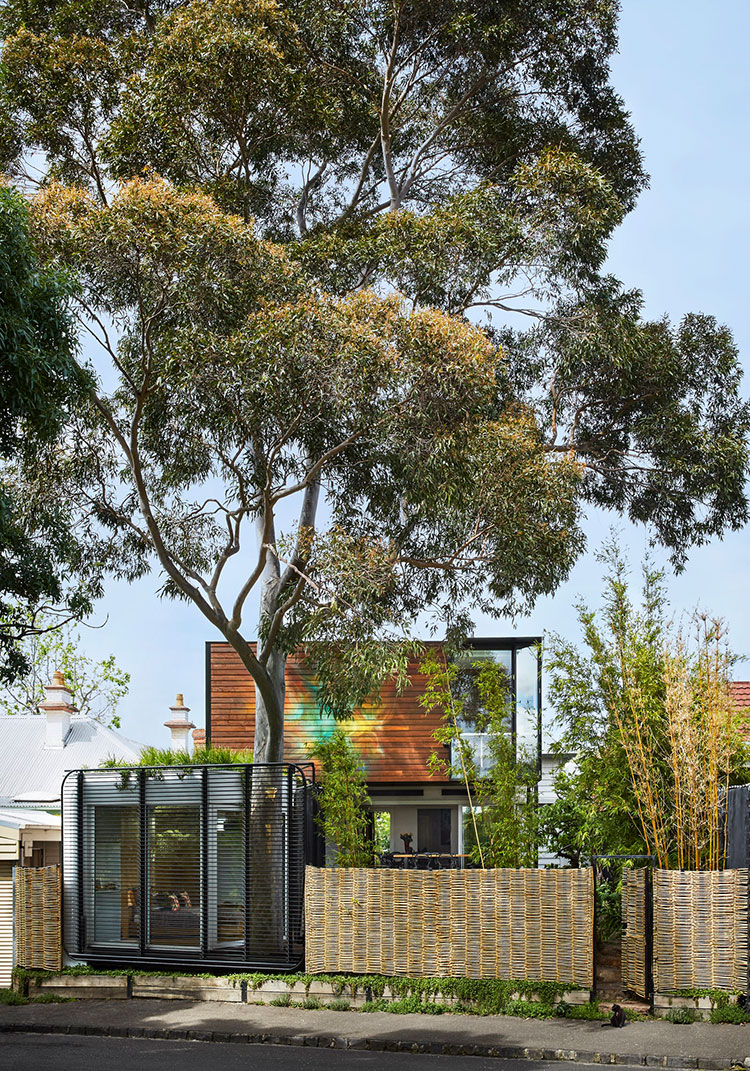