The white zinc-coated roof of this house by Aaksen Responsible Architecture contrasts with the surrounding buildings in a densely built urban area in Bandung, Indonesia.

The local architecture studio built the compact two-story residence for a Muslim family of four on the western part of the island of Java. The name of NOR House itself is taken from their children, Adara Kaila Eleanor and Sophia Cyrilla Eleonora, who have the word nur or light in Arabic as part of their name. 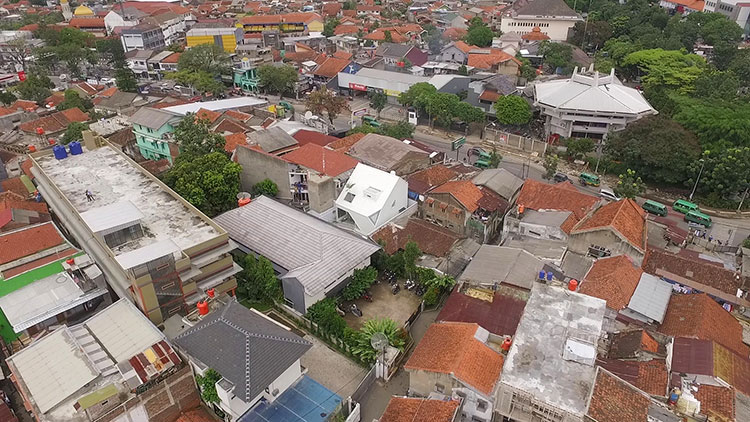 The name inspired the design team to put the element of the sun into the design. Since millions of years ago, the sun consistently rises dawn and set in the early dusk. In Islam, the communication between humans and God is called the five times of obligatory ritual prayer in which the five times indicate the transition of the sun. The obligatory ritual prayer was also an inspiration to design a house with the sun and light as the narrative of the architecture. 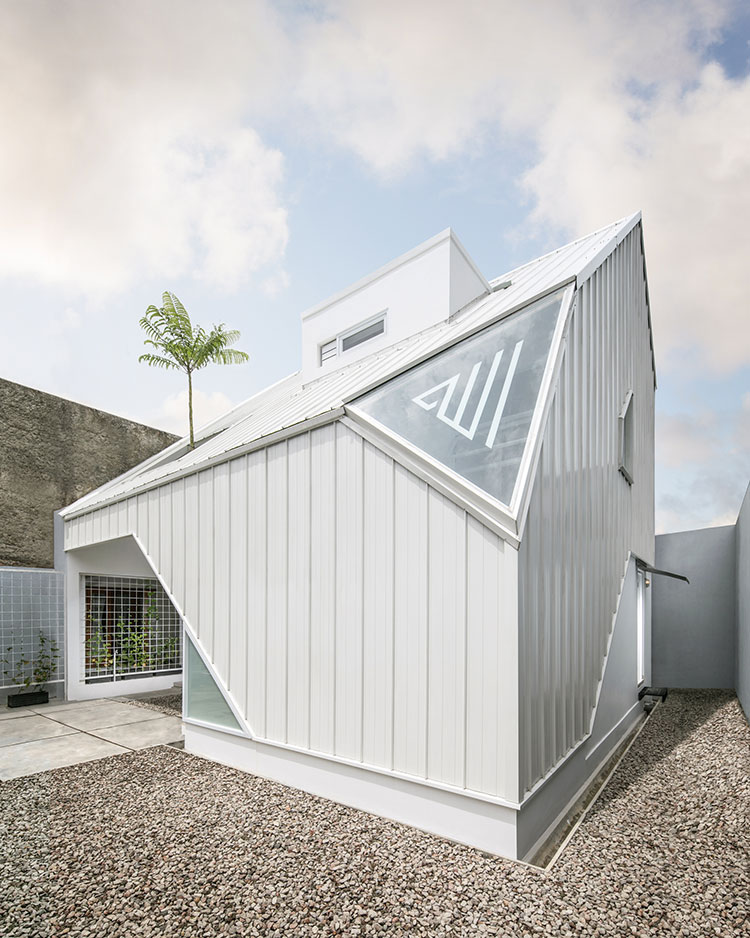 The number of openings in the building maximizes the natural light and good air circulation. The use of artificial light, in the form of a hidden lamp and indirect lighting, accentuates the detail in some areas. The example is indirect light used on parahyba tree in the garden to emphasize its trunk standing upright as though it has pierced and made a hole in the main building mass. In the prayer room, a window was installed to make an impression as though it trimmed the main building’s mass. The window also provides the light during daytime. The strong lighting coupled with the word of Allah (God) on the window surface create the writing’s shadow in the prayer room’s interior. 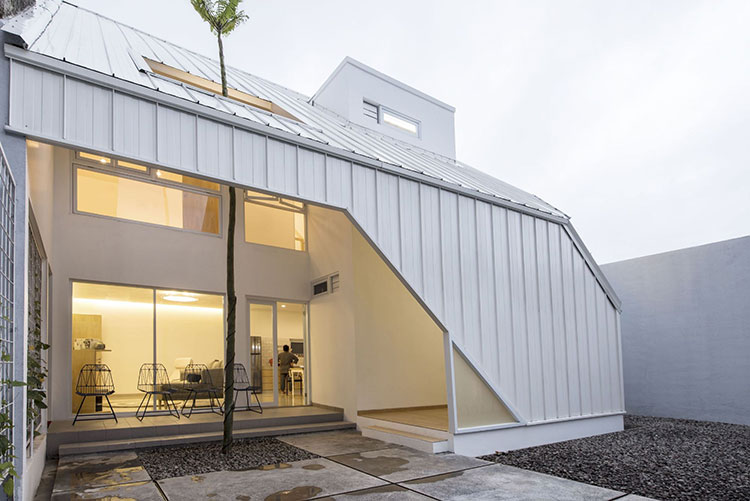 With a total area of 105 square meters, NOR House has a contemporary tropical architectural concept with white-colored, zinc-coated roof surface and facade. Its building mass and the white color make the NOR House very tidy and distinctive compared with the surrounding buildings when viewed from the air. For the building interior, ivory-colored ceramic combined with parquet flooring and white wall give a simple and clean touch in all residential area. 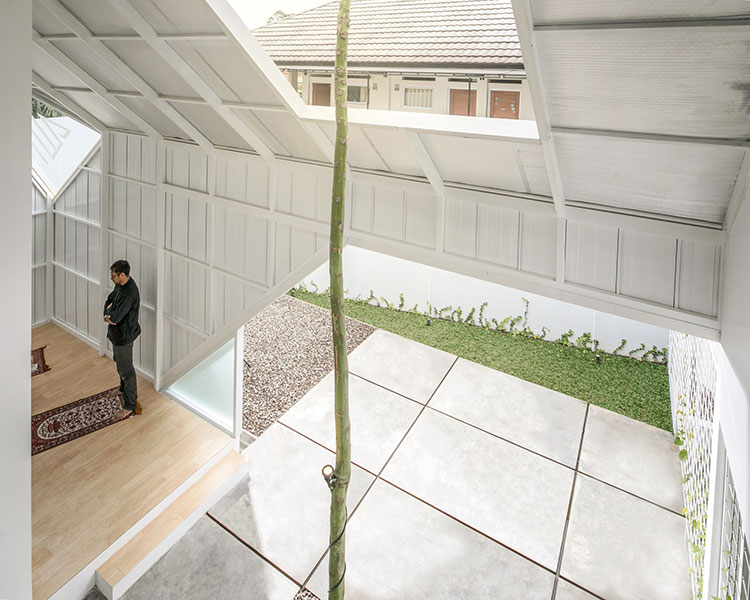 NOR House maximizes the space for its residents in two floors. The first floor has an area of 57 square meters consists of living room, dining room, kitchen, toilet, prayer room, drying room, and garden. The second floor, with an area of 48 square meters, has a master bedroom, kid bedroom, and a bathroom. Ultimately, in addition, to address the needs of the owners and the challenges of dense settlement, NOR House presents the interpretation of connections among humans and the greatness of the Creator through its appreciation on sunlight that always accompanies us every day. 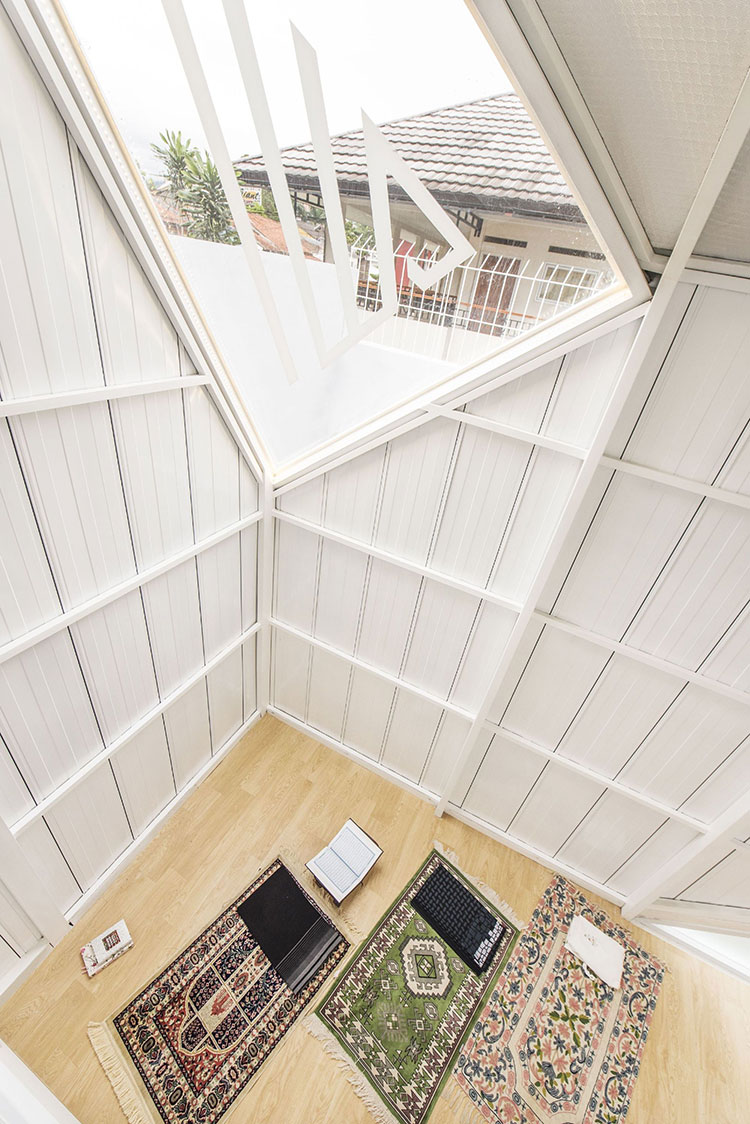 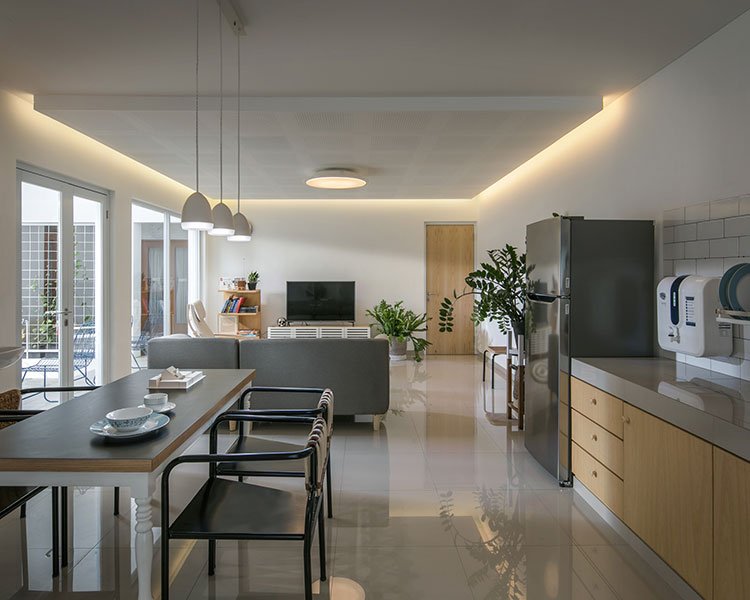 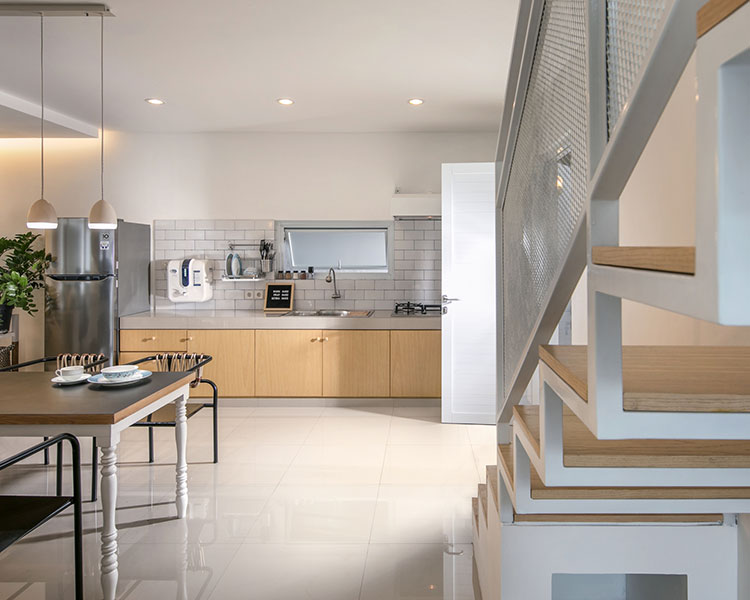 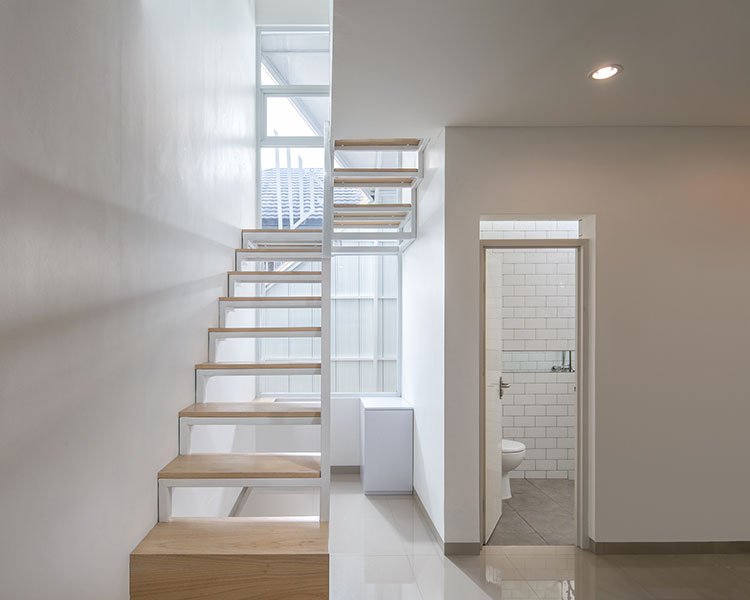 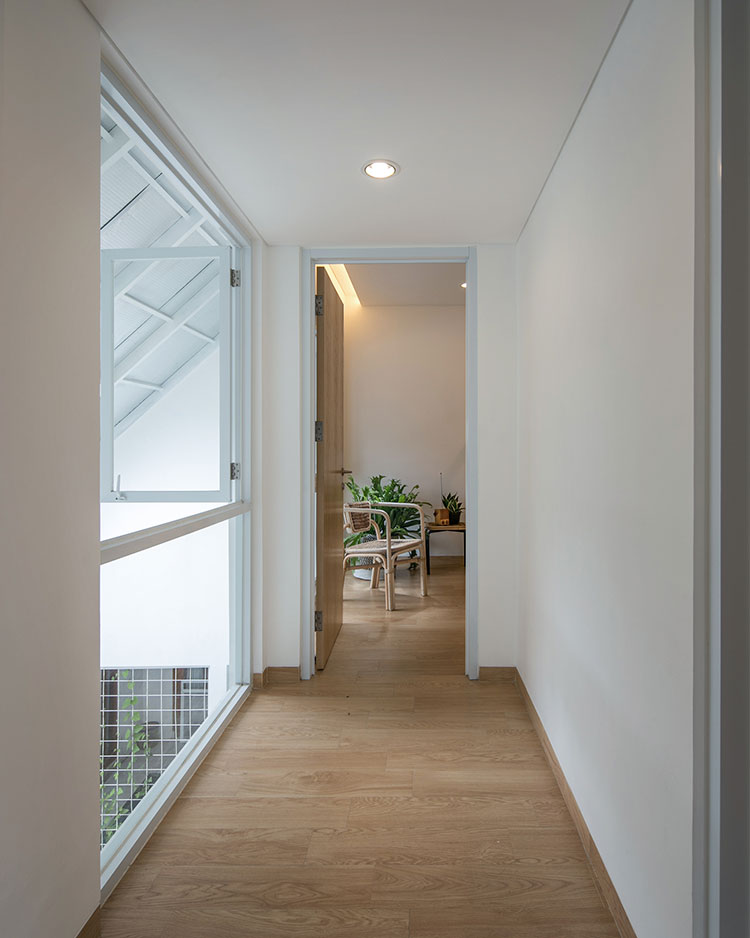 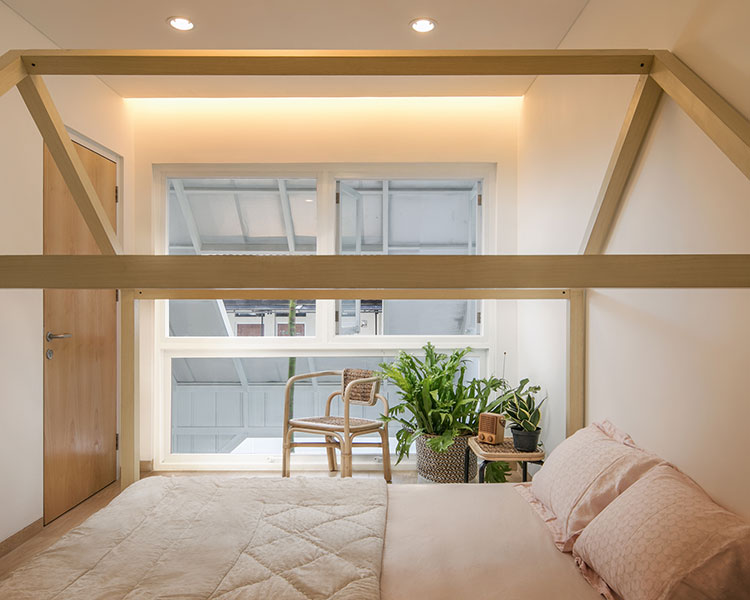 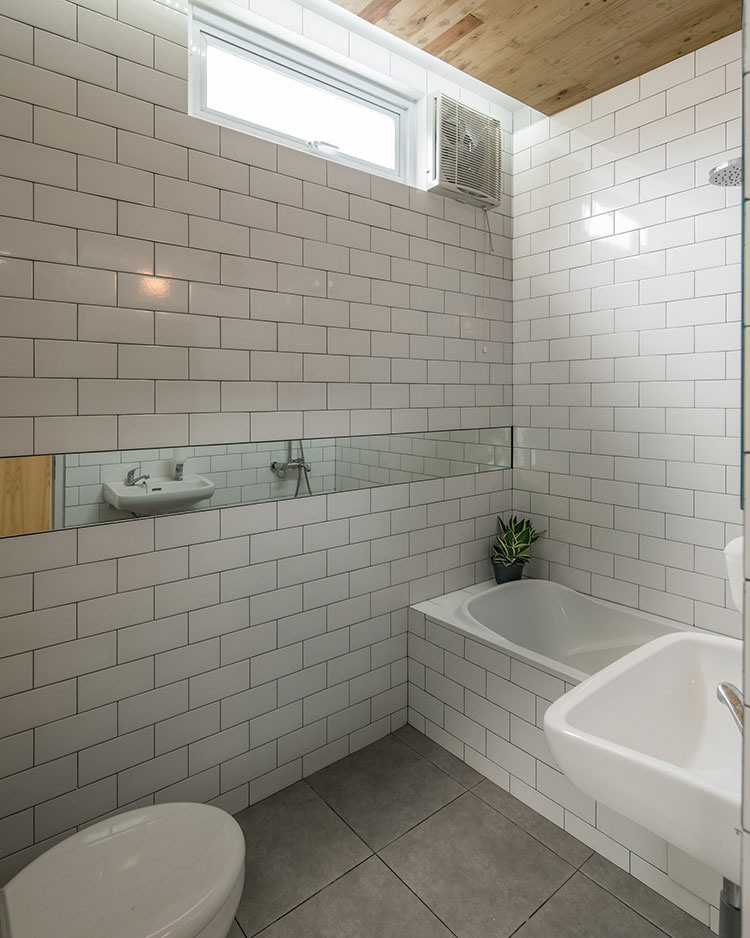 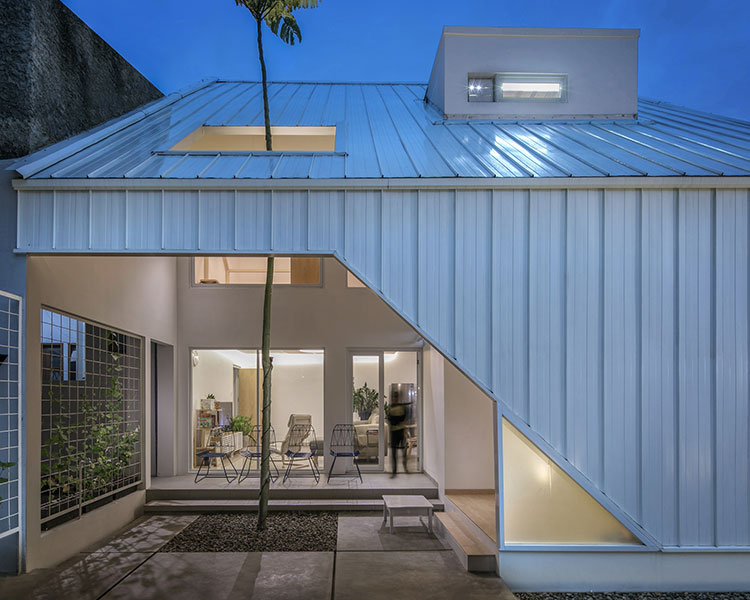