Two arches made from handmade bricks form an extension at the rear of this Victorian terraced house overlooking the river Ouse in York, United Kingdom,  recently overhauled by London practice Studio Ben Allen.

The existing house is built from traditional handmade York bricks which have a distinctive mixed palette of colors that overall give a brown/pale pink hue. This brick is used in almost all buildings and walls in the neighborhood (which is a conservation area) and lines the walls of the rear lanes. 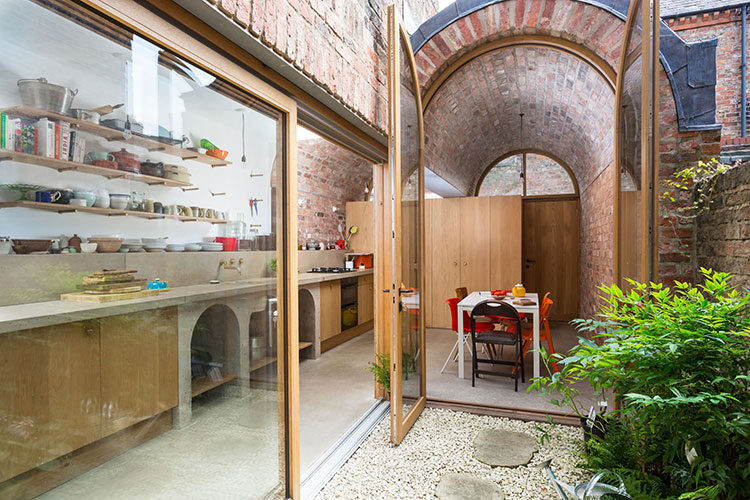 As well as the core brief to bring the house up to modern standards in terms of heating, bathroom and kitchen provision, window replacement and general redecoration throughout, the client also asked Studio Ben Allen to investigate the conversion of the attic space into a second workroom/studio. The most open part of the brief was the possible extension of the house for which the client was interested to investigate the general possibilities for how to improve the rear of the house, creating a new work and dining space and bring in more light and provide storage for their collection of bicycles. 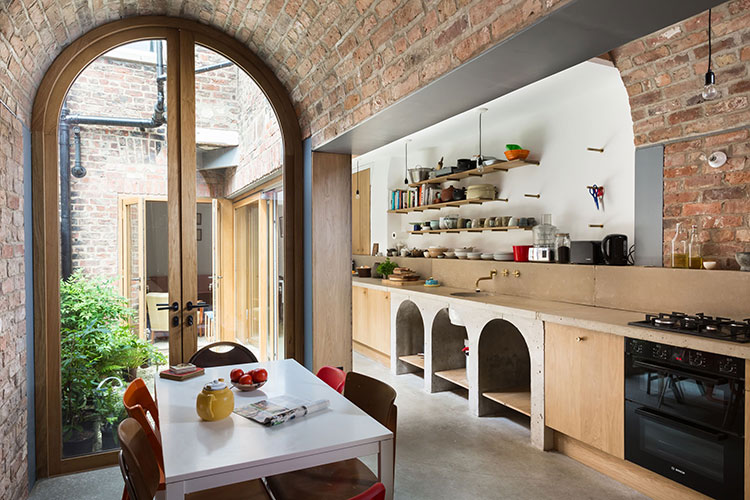 The house is reached either by the riverside pedestrian walk or from a back lane. Grand on the front, the houses are utilitarian at the rear with small backyards adjoining narrow brick lanes. It was the simple beauty of these rear spaces, a landscape almost completely of one material: local York brick facades, yards and lanes that was the inspiration and departure point for the design. 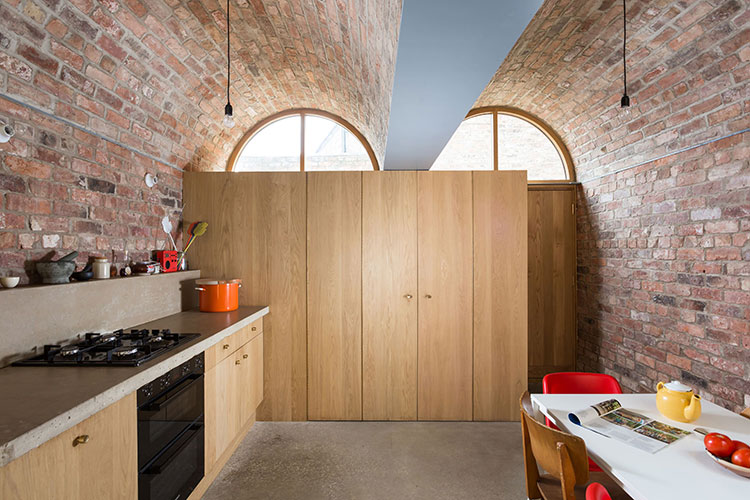 The extension, built of loadbearing handmade York bricks, fills the backyard leaving a small glazed courtyard garden which brings light deep into the house. The extension contains a kitchen, living and work space. The roof comprised of two structural barrel vaults (the brickwork is load bearing). On the East elevation (facing the back lane), the two glazed vault-ends provide high-level light from the back lane whilst on the west side one of the vaults frames the view of the courtyard. The newly enlarged ground floor creates one expansive space with the courtyard appearing as a room within a room. 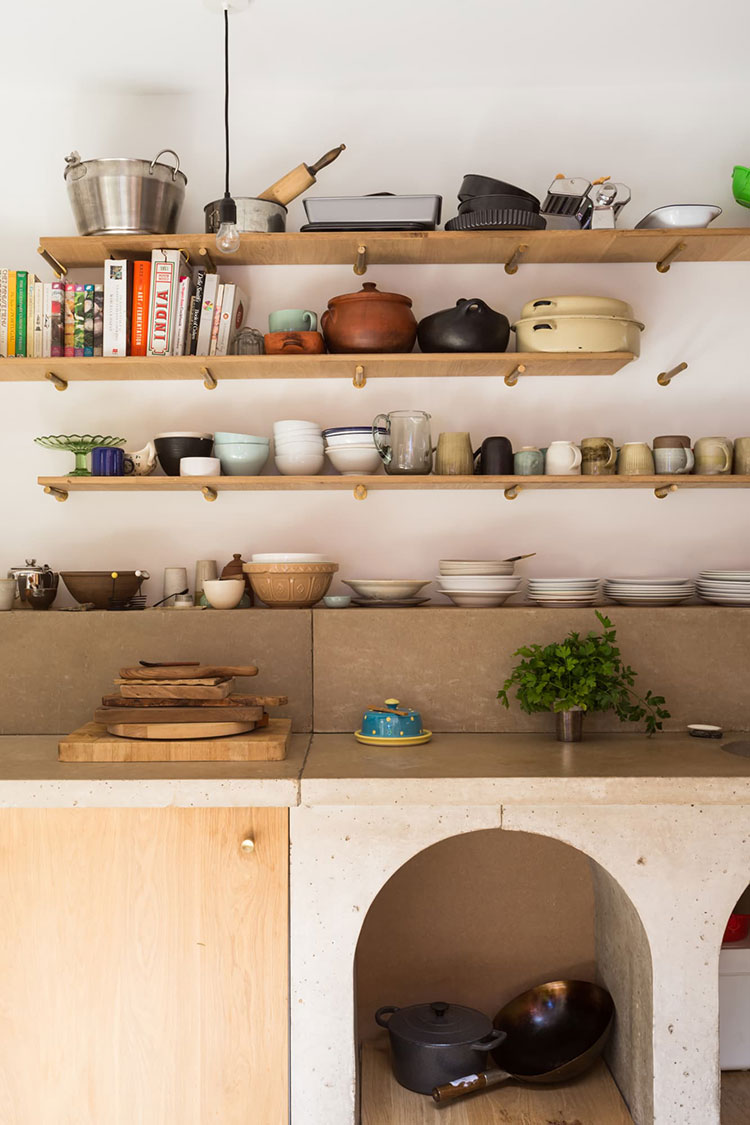 The materials are robust, utilitarian and designed to last and improve with age. The cupboard doors are solid oak and the concrete counter is supported on three solid concrete arches. The heated floor is a cement screed that is typically used as a sub-floor. A bike store caters for the clients’ keen love of cycling (it also disguises the bin store – the bike store was by happy coincidence also a planning condition) and can house up to six bikes. 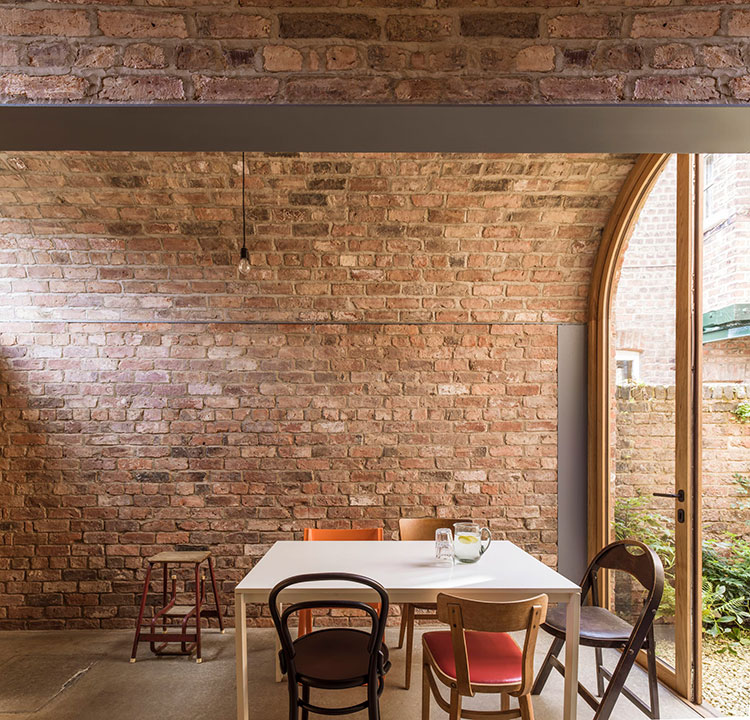 The first-floor bathroom also follows the utilitarian theme with inexpensive taps stripped back to their base brass and matched with bespoke milled brass elements. The stair to the attic and bedroom wardrobes are designed as one element that interlocks through the central wall of the house. The stairs are computer (CNC) milled from birch plywood and made as a kit of parts to save costs and for quick assembly on site. 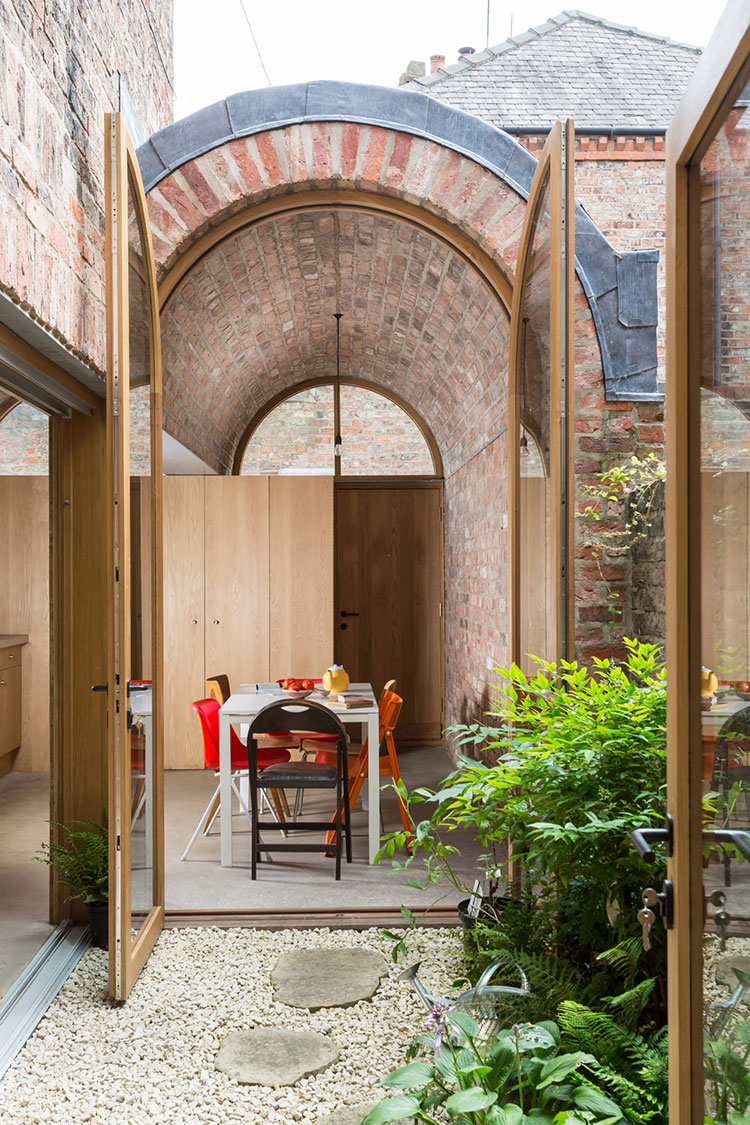 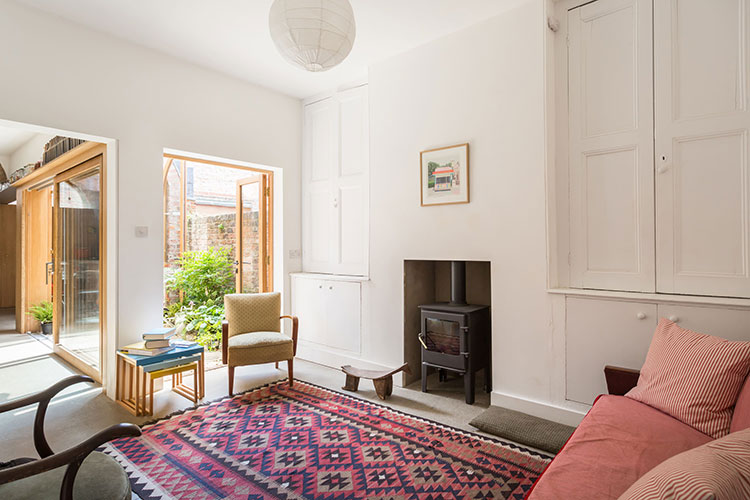 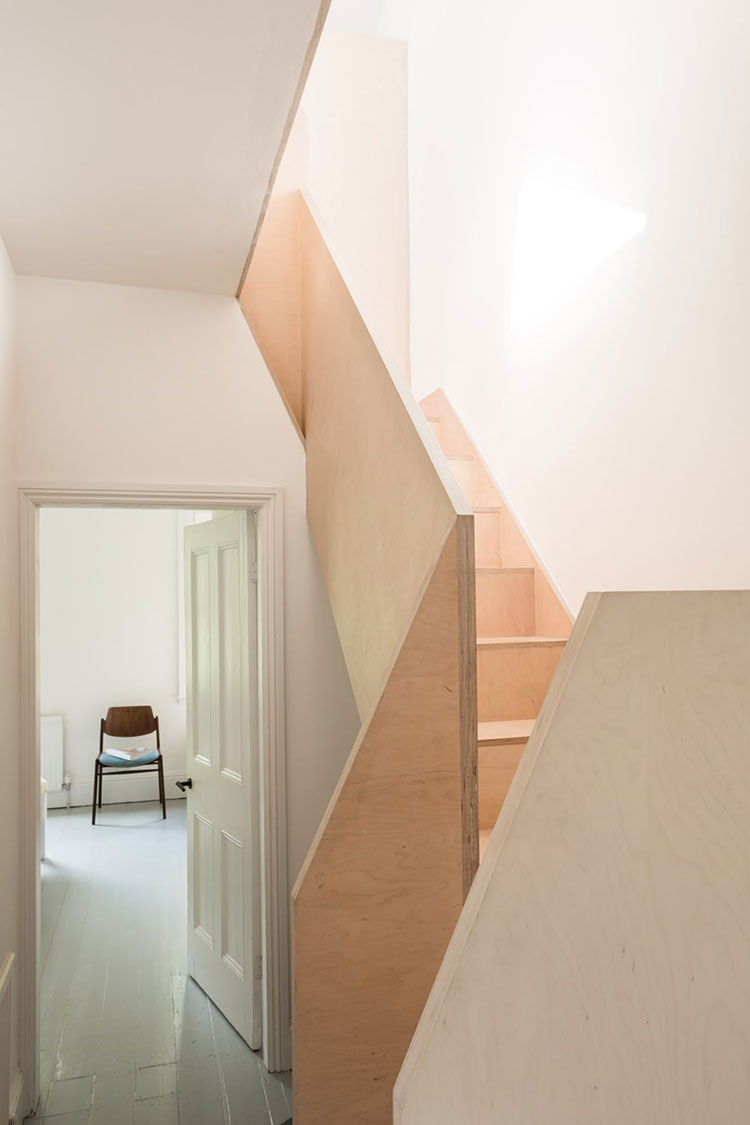 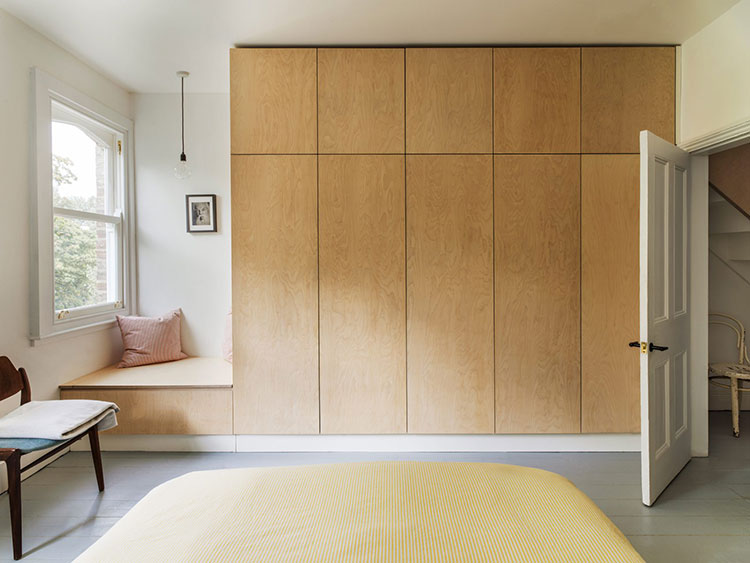 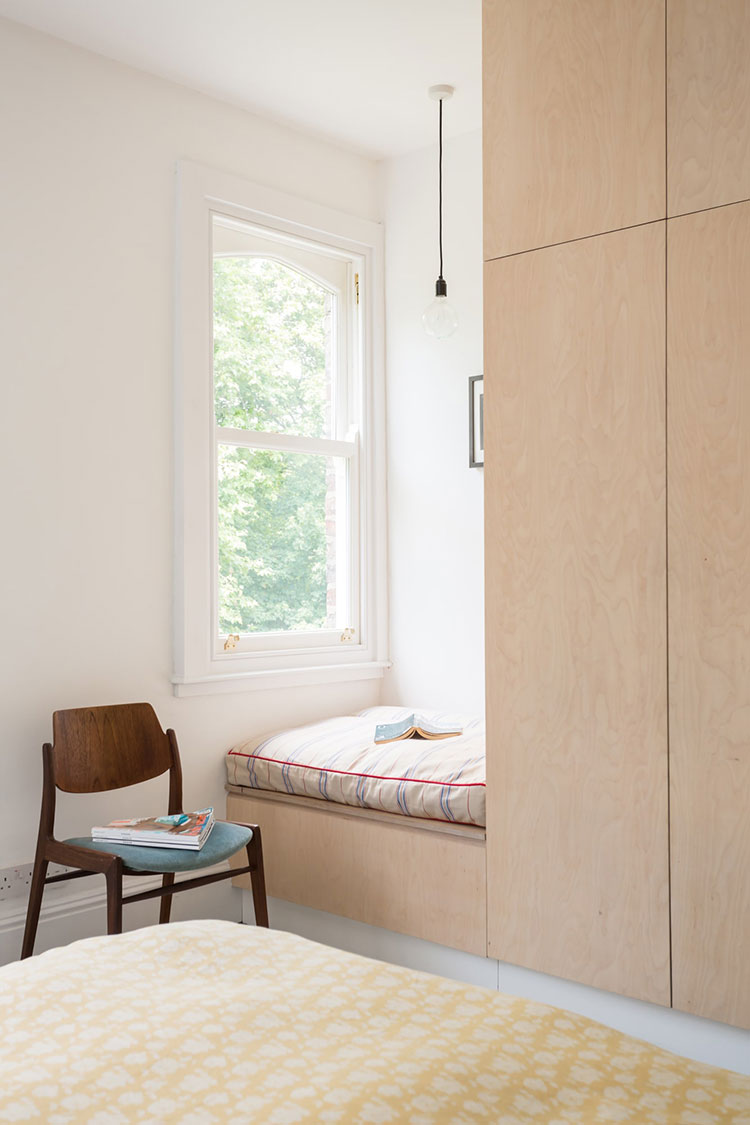 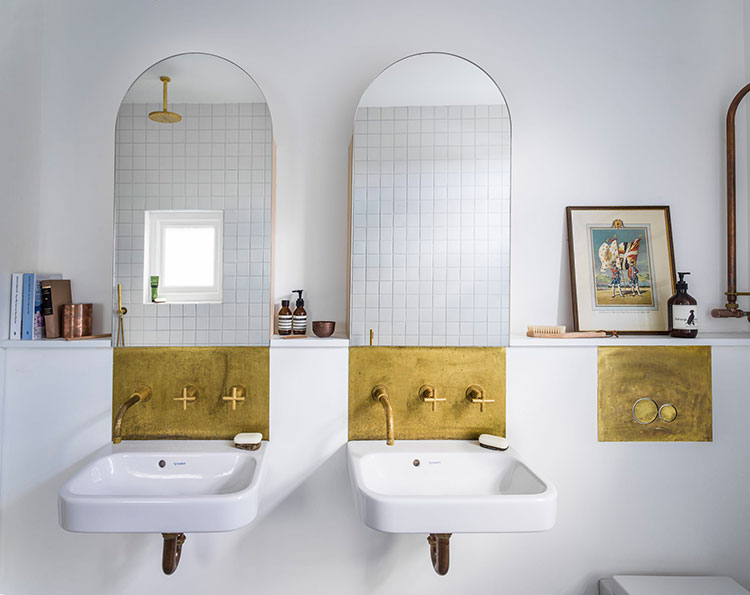 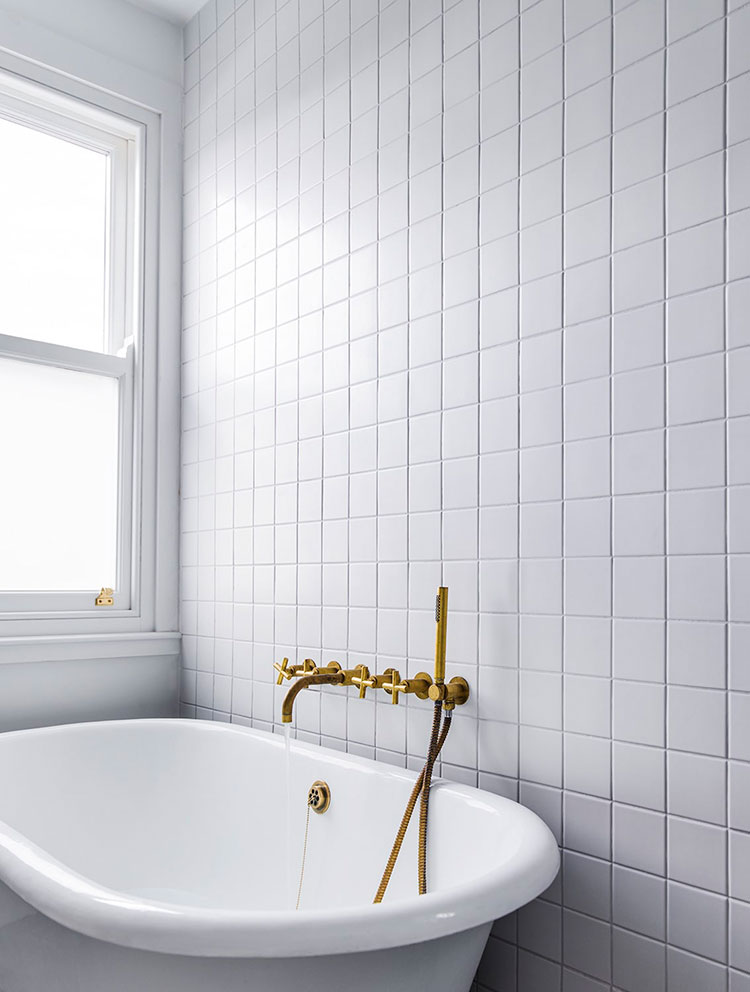 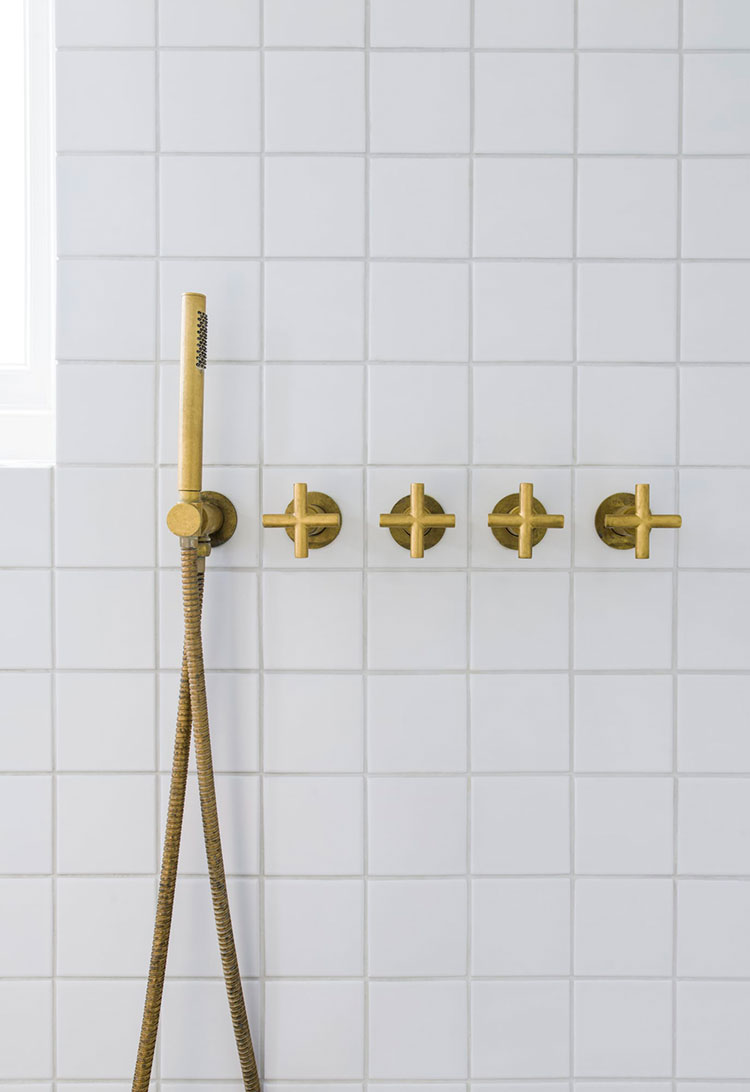