Located in the vibrant back streets of Fitzroy, Melbourne, King Bill is the renovation and extension project, lead by local firm Austin Maynard Architects, of a double story terrace house and neighboring garden.

The house (one of 5 terraces built circa 1850) and its eastern garden were initially separate lots that were recently consolidated onto a single title. Recognising the importance and heritage significance of the area, as well as the rich eclectic nature of the location, the terrace facade remains untouched. A glazed corridor now runs along the eastern outer wall of the original terrace, linking the original house with the stable (garage and parents retreat) and the new pavilion, which houses kitchen, living and dining. 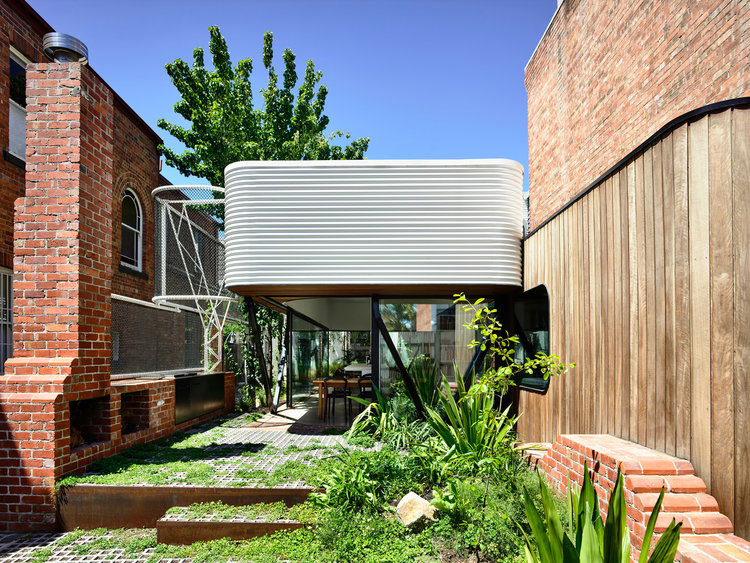 A family of four asked Austin Maynard to design them their “forever house”.  They asked for a renovation to their two-story terrace home, incorporating the empty garden site to the east and re-using the old stable building at the rear. Longtime Fitzroy locals, the clients chose not to capitalize on their block by exploiting the vacant site. They wanted more living space but they had no intention of maximizing the economic yields by creating a huge home. Instead, they sought to give something back to the suburb they love through a rich and generous garden. 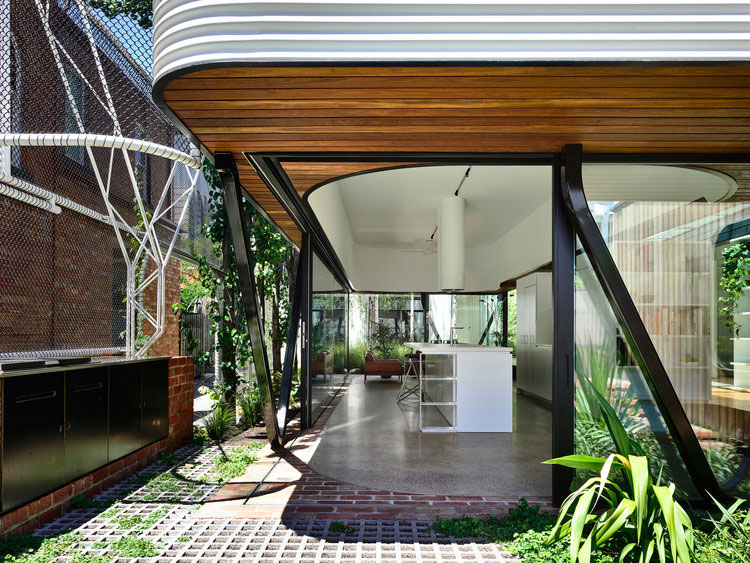 For two centuries Fitzroy has been a highly diverse suburb of Melbourne. Throughout Fitzroy we see examples of this. Brick terrace homes, weatherboard cottages, post-war stud-veneer homes and 1960s flats sit comfortably next to corrugated sheds, old factories and repurposed warehouses, randomly broken by pocket parks and dense gardens. This diversity surrounds one of the finest neo-classical buildings in Australia, The Fitzroy Town Hall, one block form King Bill. Fitzroy’s history of boom and bust is written in its buildings, which has created a diversity and eclecticism rarely seen nor maintained with such affection. Here there is memory but also a dedication and willingness to be playful. Fitzroy is not nostalgic about its heritage, it engages with it. If you want to bring an old building back to life you do something vibrant so it doesn’t become a museum piece. 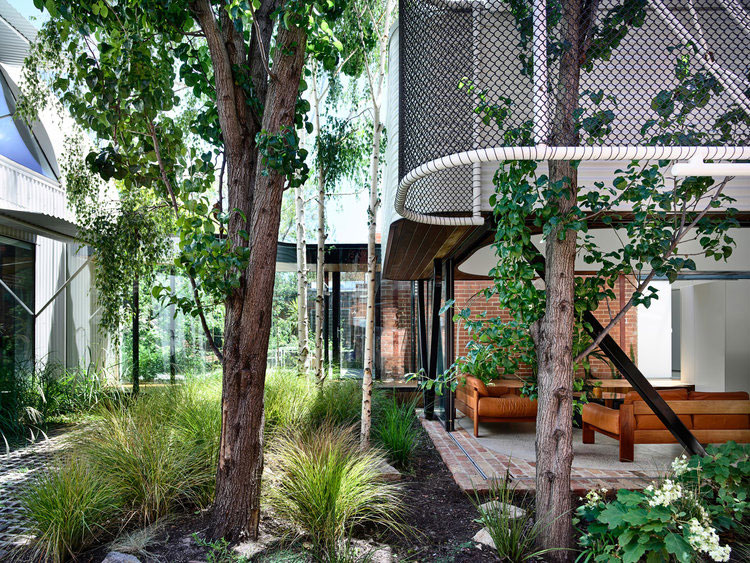 At King Bill, Austin Maynard Architects set out to completely re-think the terrace house and the principles that created them. Typically you walk through the front door of a terrace, past two bedrooms to the kitchen/living and small rear yard, which is usually overshadowed by the house itself.  Austin Maynard Architects set aside these principles and looked at the house as empty spaces that needed new purpose. Holes have been punched through the boundary wall on the east and the entrance has been moved to the side to become a light-filled corridor linking the old house with the stable and pavilion. With the entry moved, the original terrace entry porch is now a garden and the entry corridor is now a bathroom, which brings delight to the owners as they watch visitors scratch their head while they try to figure out how to find their way inside. 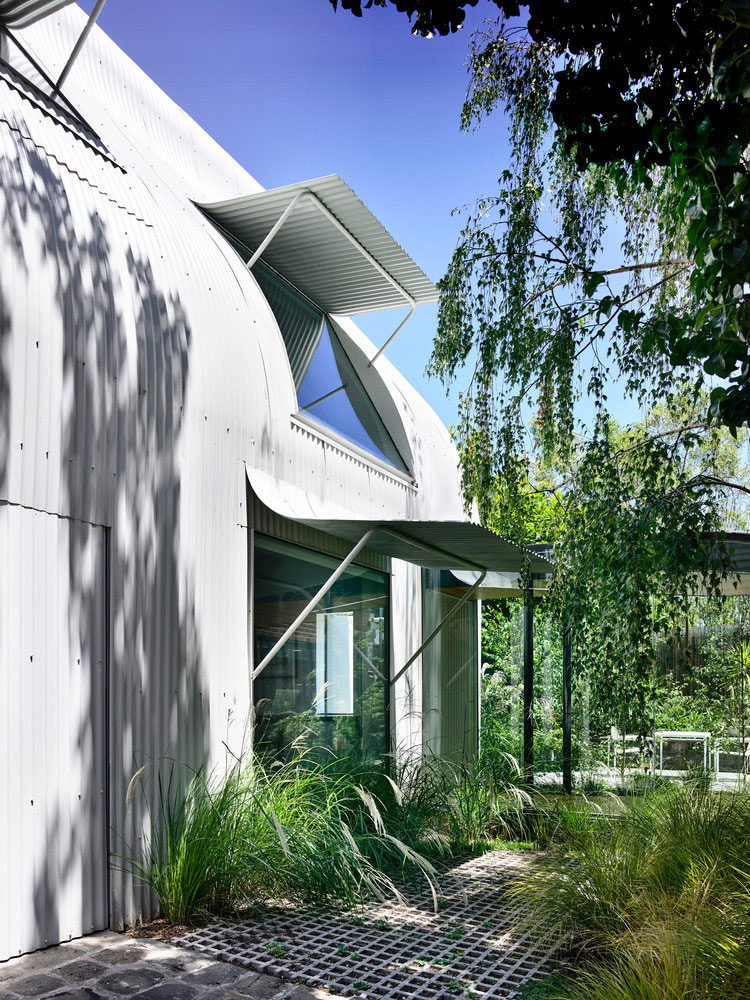 Surrounded by established garden, the glass pavilion sits in stark contrast to the dark masonry walls of the robust two story terraces either side. As with many Austin Maynard Architects projects the spaces created vary greatly in nature, thereby enabling the users to occupy spaces that best suit their mood, at any specific time. The introvert who wants to hide away and read a book in a dark space, verses someone who wants to slide away from the walls and be in amongst the garden. Retaining the existing trees was fundamental to creating a variety of spaces. The house and the structure was meticulously designed to ensure that the existing trees remained intact throughout construction. 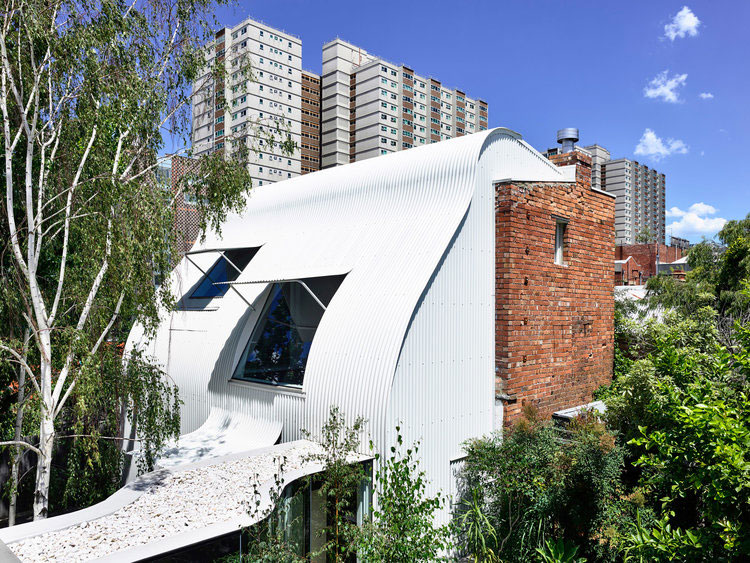 Austin Maynard Architects were determined to maintain and encourage a significant garden, to enrich the block, to contribute greenery to the street and to create another pocket park in Fitzroy. The eastern garden, which was obscured behind a tin fence, was already long established with thriving Ornamental Pear and Silver Birch trees. Instead of clearing the site (the easy option), great care, consideration, and even greater lengths were taken to save the trees. This was a project in itself.

The concrete slab of the living/kitchen/dining pavilion cantilevers beyond its footings so as not to encroach on the root zones of the trees. The foundations for the Y-shaped steel framing are thin piers designed to pierce the ground in the smallest way possible to avoid causing root damage. The Y’s themselves were meticulously arranged to avoid trunks and branches, while the screening allows generous space for natural growth. 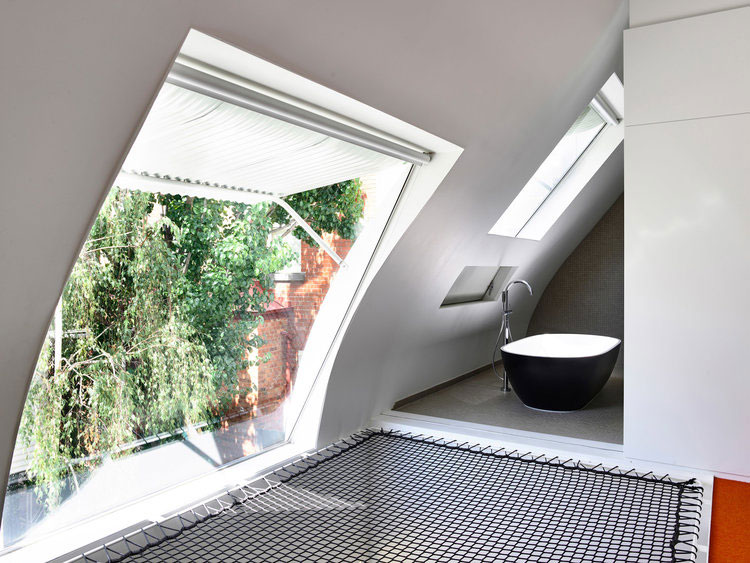 The brick and metal rear stable was in general disrepair. The original brick walls, internal fireplaces, and timber beams were retained. The new zincalume walls provide a contemporary memory of the former life of the stable, which now houses a car stacker and a study, with the parents’ bedroom and bathroom above. A large curved sliding wall separates the parents’ bathroom from an open net over the study below. The parents can now step out of the bath, slide the wall away and then air dry themselves on the net in front of the big sunny north facing window. 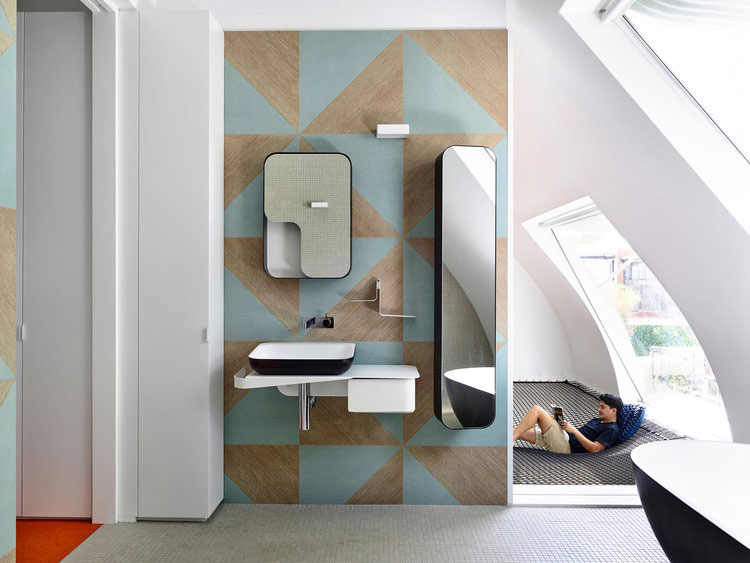 The distinguishing and unifying feature of King Bill is the corrugated colorbond steel metal cladding. Surfmist Custom Orb is used to define each of the additions – the stable building, the glass pavilion, and the bedroom pop out. The advantage of the profile is that it can be rolled to create sweeping curves and sun shading eyelids. The versatility of using the linear ribs vertically or horizontal – allows the material to be used practically in different applications, to shade and guide rainwater (the stable and pop out), or to create the curve of a building (the pavilion.) 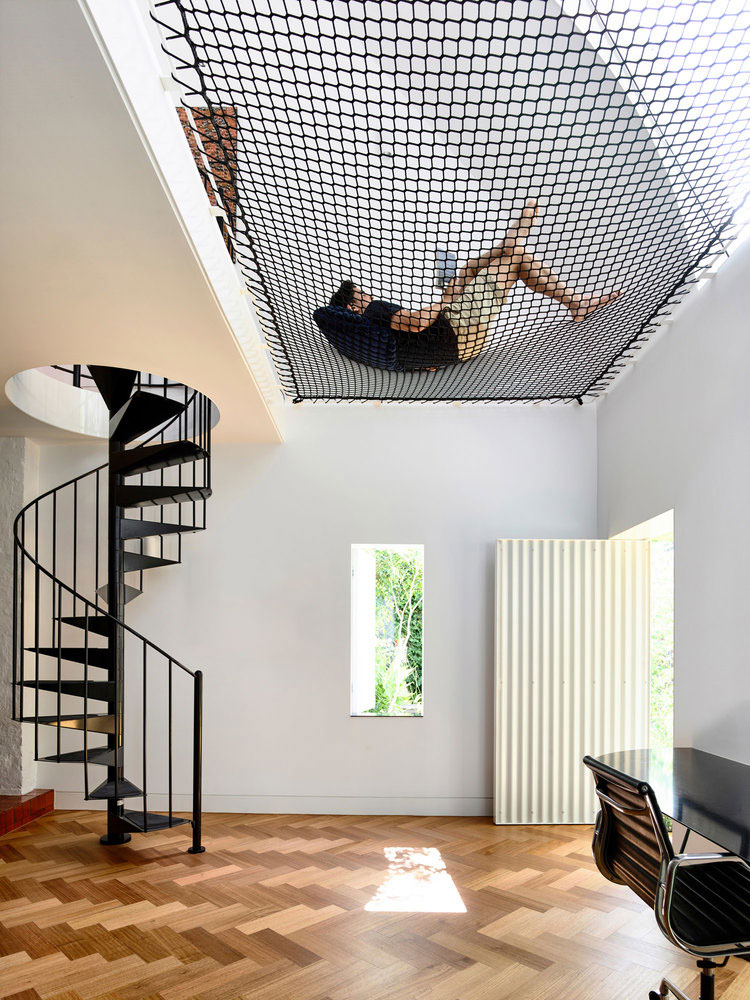 Like all of Austin Maynard Architects buildings, sustainability is at the core of King Bill. The large garden increases the permeability of the site and also radically reduces heat sink in the area. Passive solar principals are maximized by the design. The pavilion is set back to create a sunny northern garden and is a deliberately low structure allowing sunlight into the garden to the south of it and passive solar gain into the re-imagined ‘shed’ on the southern boundary. The northern facade of the shed has been rebuilt to create a smaller footprint. The new facade is clad in Surfmist Colorbond which significantly reflects heat. The wall is double stud and thermal broken with high-performance insulation throughout. 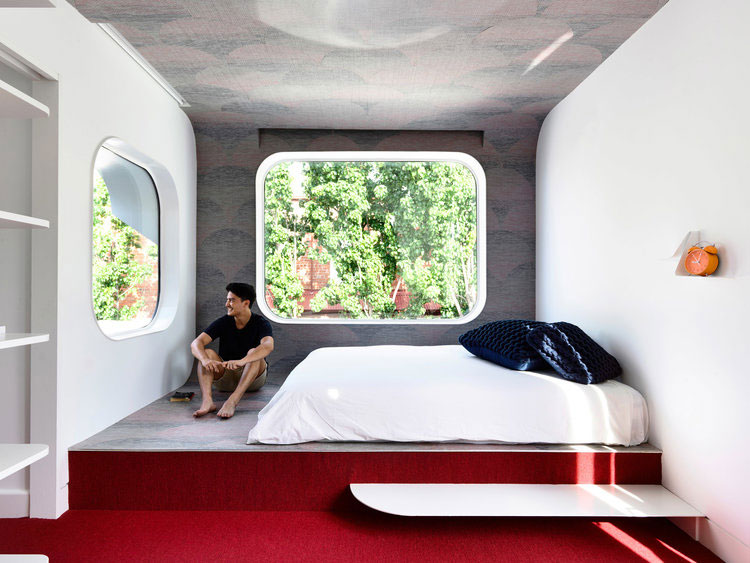 All new work aims to maximize available daylight and optimize passive solar gain in winter while ensuring that summer sun does not hit the glass. All windows are double-glazed. There is no glazing on western facades and limited glass on the eastern facades. With active management of shade and passive ventilation, demands on mechanical heating and cooling are drastically reduced. A large water tank has been buried within the rear yard. All roof water is captured and reused to flush toilets and water the garden. Where possible Austin Maynard Architects have sourced local trades, materials and fittings. Solar panels with micro-inverters cover the old roof. 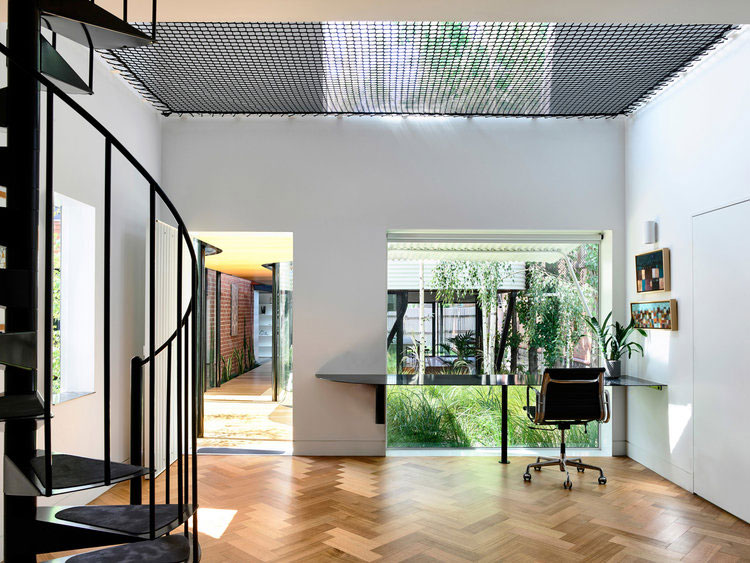 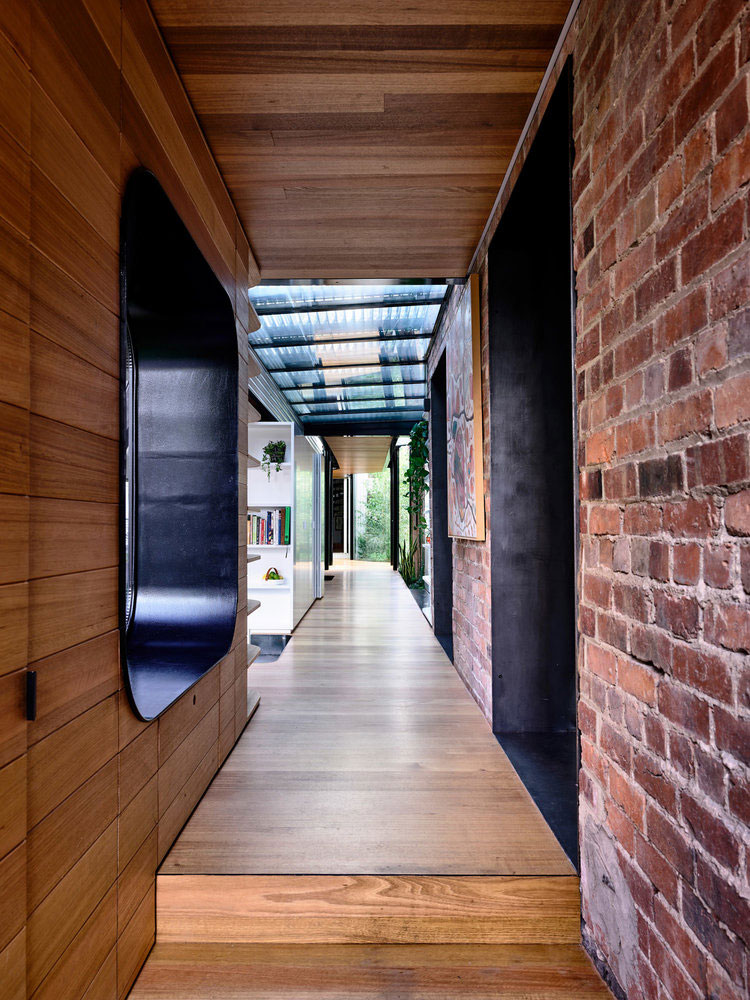 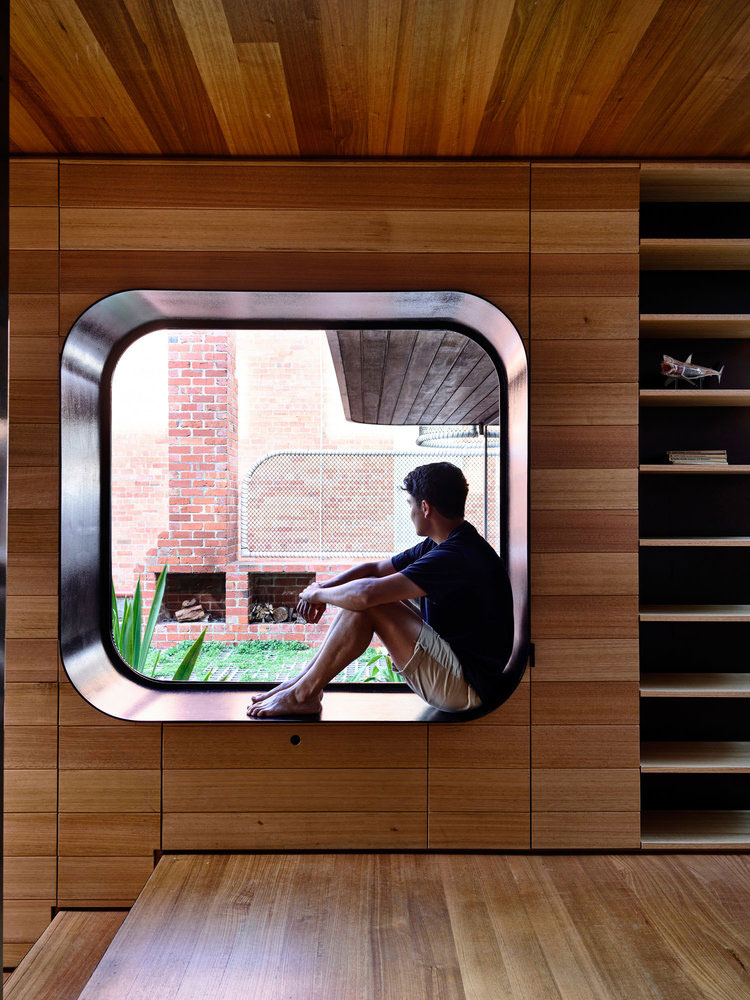 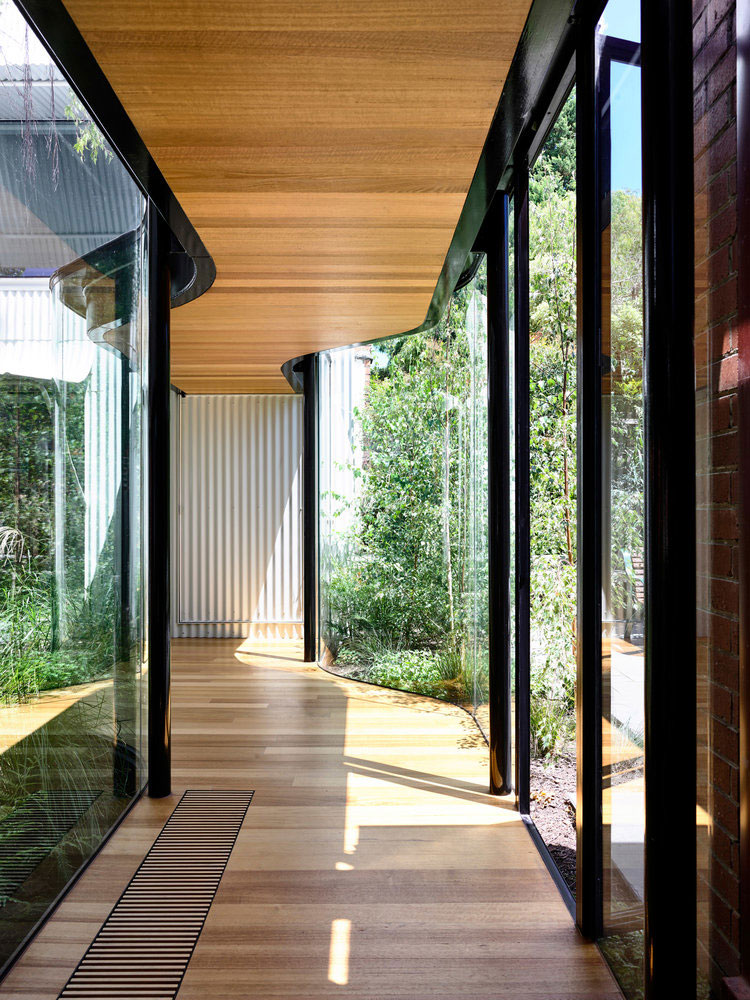 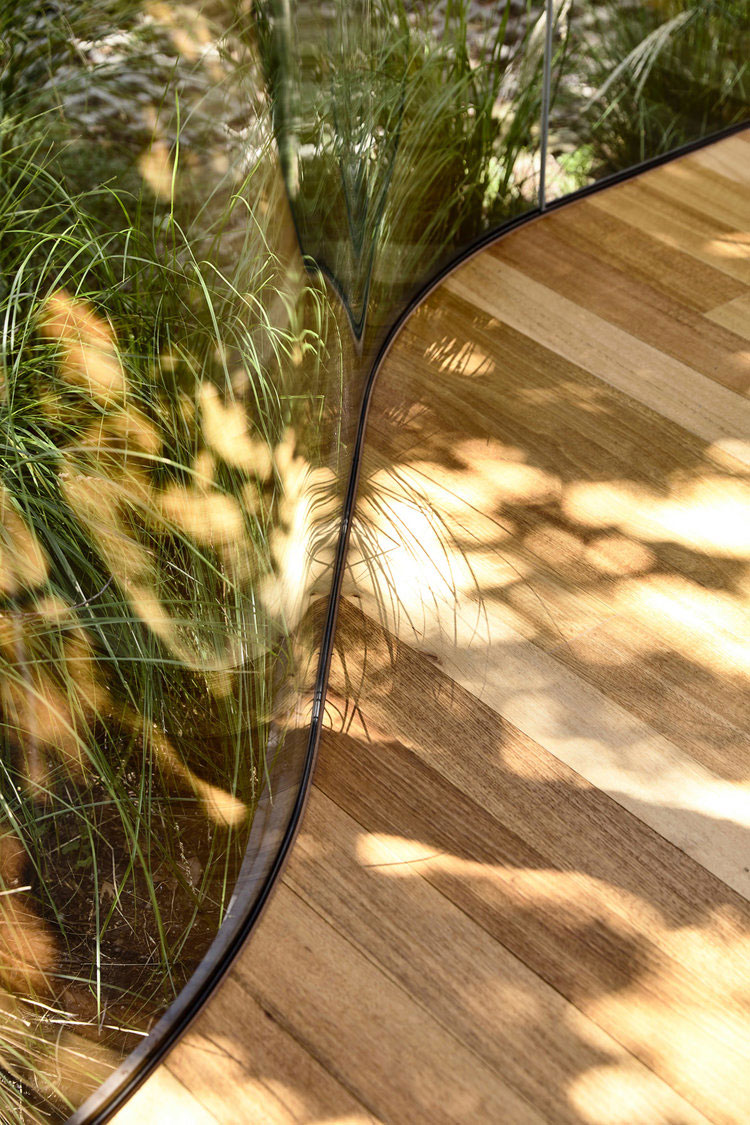 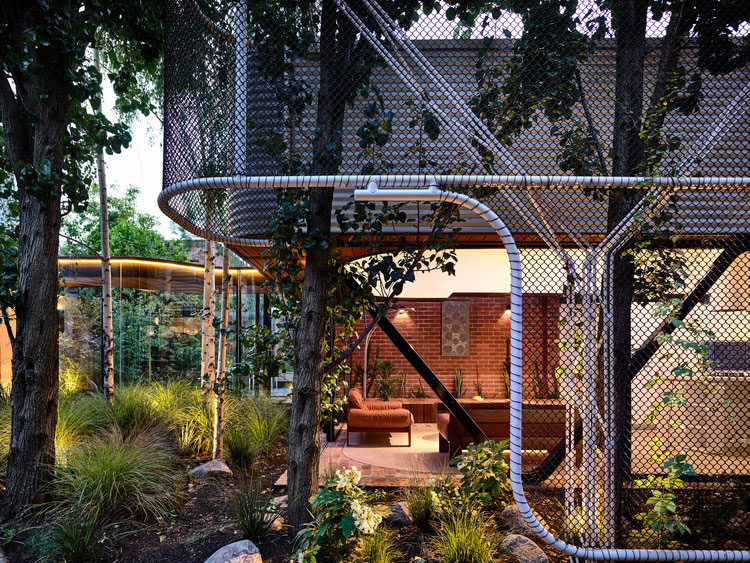 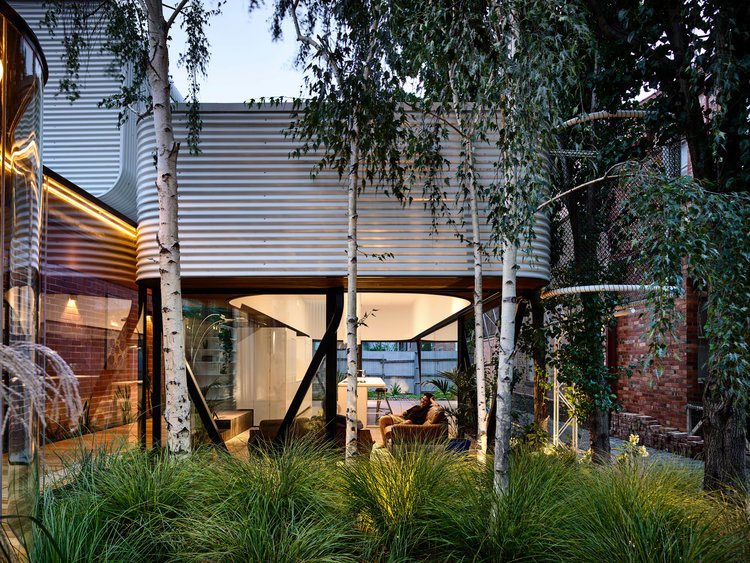 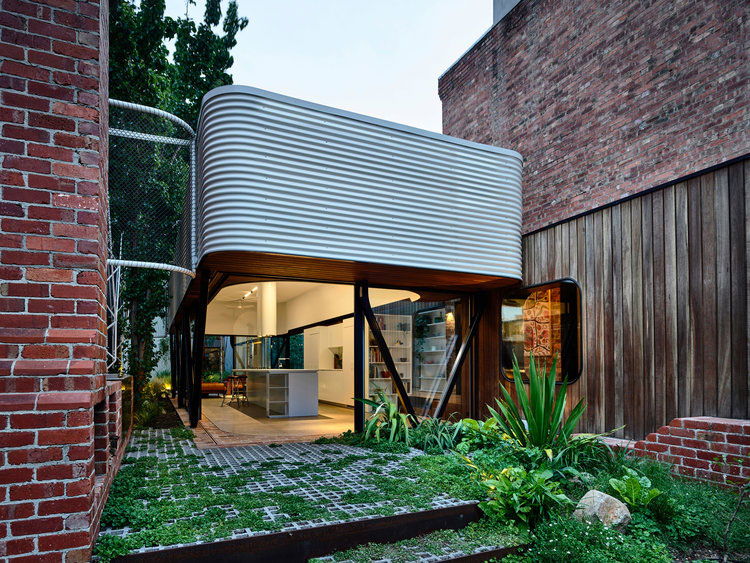