LLI Design has recently refurbished a 3-storey Victorian townhouse on a leafy residential road in Highgate, North London. The brief was to create a warm, comfortable home with modern touches. Although the house was in reasonable condition, the joinery and fittings throughout the house were dated, had been well used and looked tired. Many of the period features had been stripped out and those that remained had not been maximised. The house lacked character and personality although it benefited from “good bones”, nicely proportioned rooms, a delightful garden and a handsome exterior.

LLI Design felt that more could be made of the period features, enhancing some and reinstating others to bring out more of the Victorian feel of the property as well as adding more contemporary elements to the scheme. 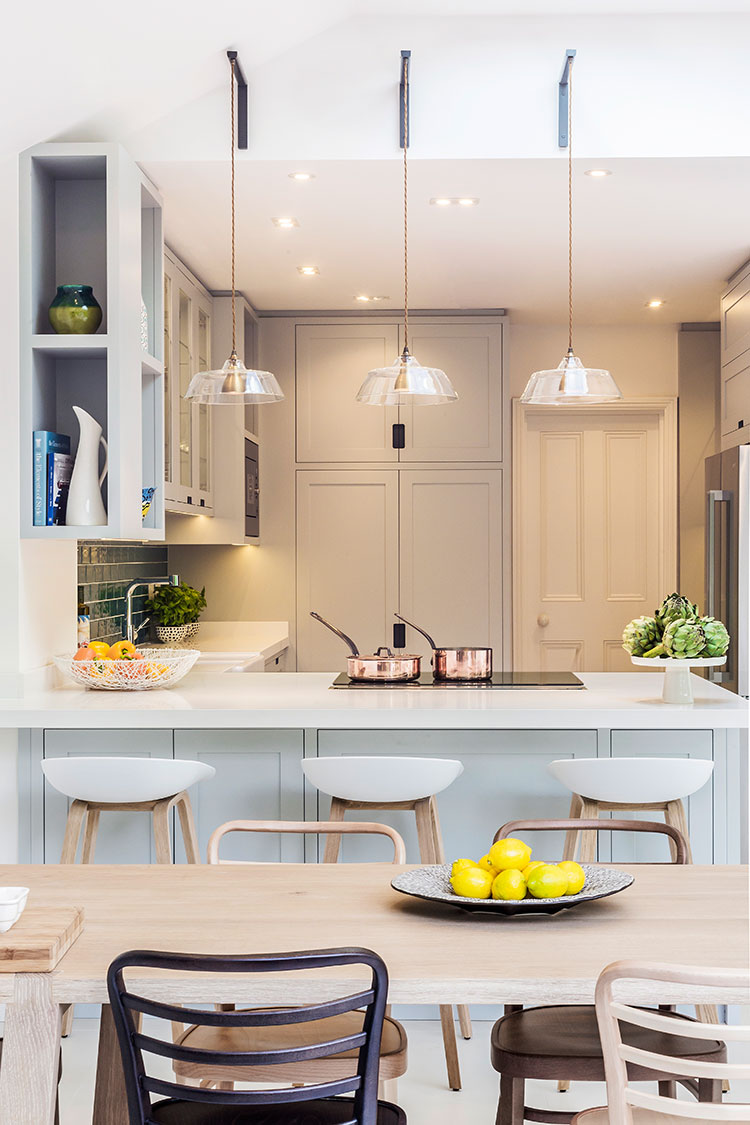 The house comprised of c. 2500 sq ft/230 sqm spread out over 3 floors including a cellar and a lovely rear garden. The ground floor comprised of a generous hall leading to 2 connecting reception rooms and at the end of the hall an extended kitchen. There was a small WC and stairs down to the cellar. It was decided to leave the cellar as it was and use it for additional storage. The first floor is divided into 2 bedroom suites. The Master Suite; comprising of a good size principle bedroom with steps down to an ensuite and off the master bedroom, a small dressing room.

A Nursery Suite was created at the front of the house comprising of a sizeable bedroom and an ensuite bathroom. On the half-landing up to the second floor was a children’s bedroom and on the top floor a family bathroom, guest bedroom and a generous study room. 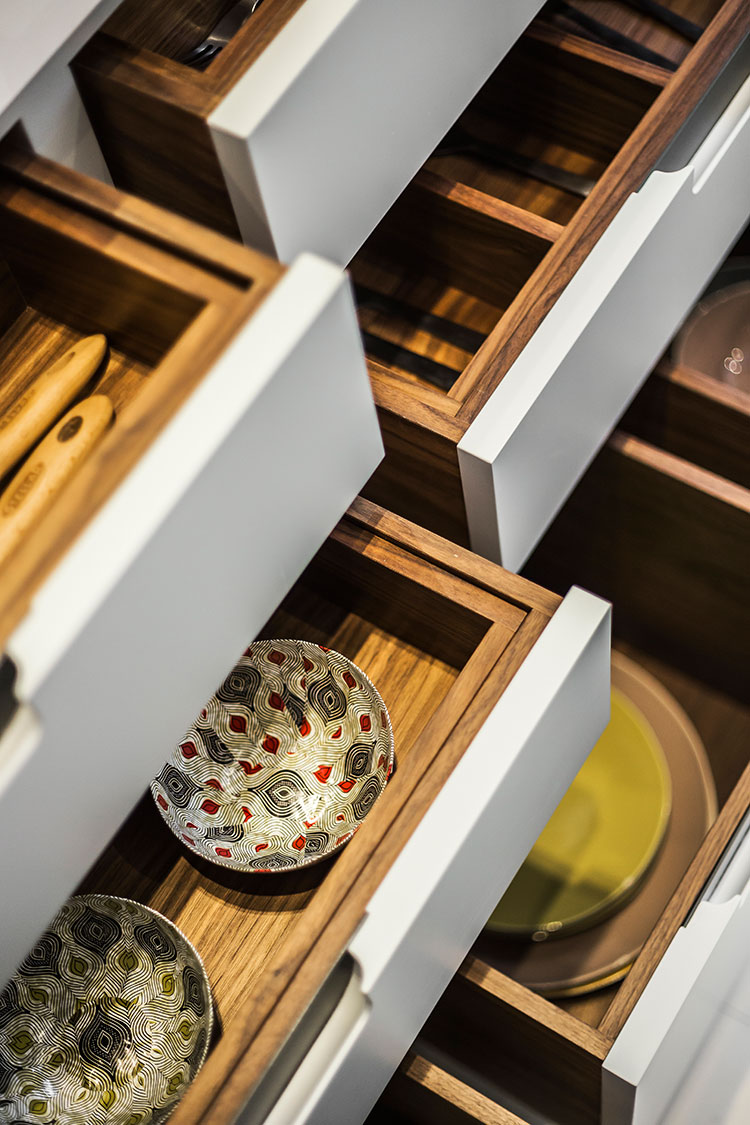 Although the entrance hallway was a good size, it lacked character. To address this the stained glass in the fan-light window above the front door and side window was reinstated, in a bespoke design, bringing light, colour and texture into the hallway.

The original tiled floor had long been removed so a period style crisp black and white tile with a border pattern was specified. This immediately visually increased the size and lightness of the hall area. 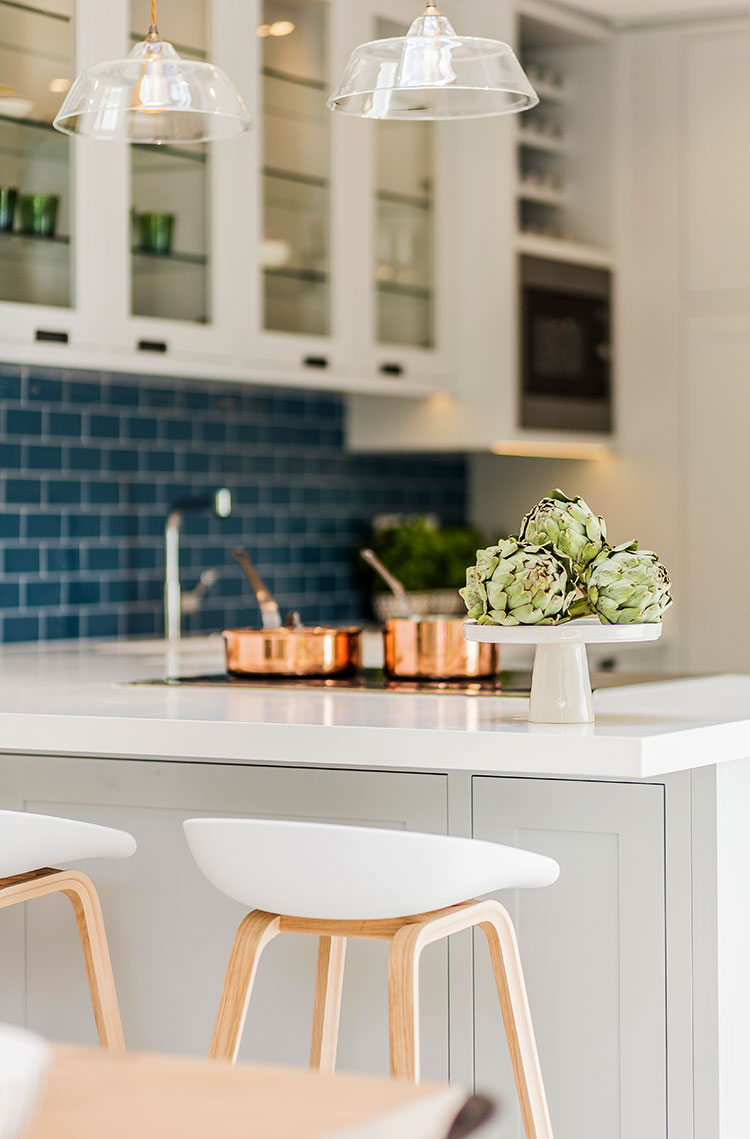 Considering the overall size of the house almost no provision had been given to coat storage. So as not to compromise the size of the hall a small amount of space was nibbled out of the generous dining room adjacent to the hall in order to create a cloaks cupboard. This created a small return in the dining room; so that this wasn’t visually intrusive in the dining room the coving, skirting and dado detail wrapped seamlessly around the new return. The new return had the added advantage of creating an alcove for a sideboard, thus making the whole alteration seem natural.

Nigel Tyas were commissioned to produce a dramatic copper and glass pendant light in the stairwell that hung from the top floor ceiling down to the ground floor, giving a visual connection and really creating a wow factor. 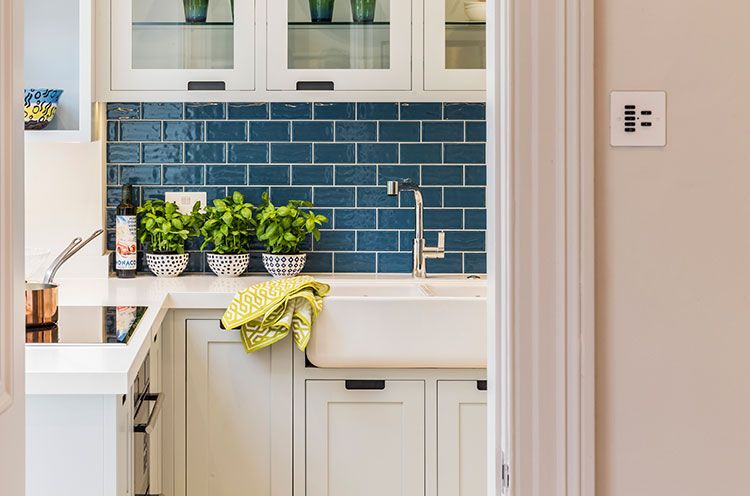 In the living and dining rooms new light greyed oak parquet floors and traditional white marble fireplaces were specified. Bespoke pale grey lacquer joinery was designed and installed either side of the fireplaces in both rooms, incorporating plenty of storage, with asymmetrical shelving which was lit with individual accent in joinery spotlights. At the side of one of the fireplaces a black steel log store was incorporated.

Both the dining and living rooms had the original ornate plaster ceilings. However they had been painted white throughout and were visually lost. This feature was brought back by painting the plaster relief in close, but contrasting, tones of grey to emphasis the detail. 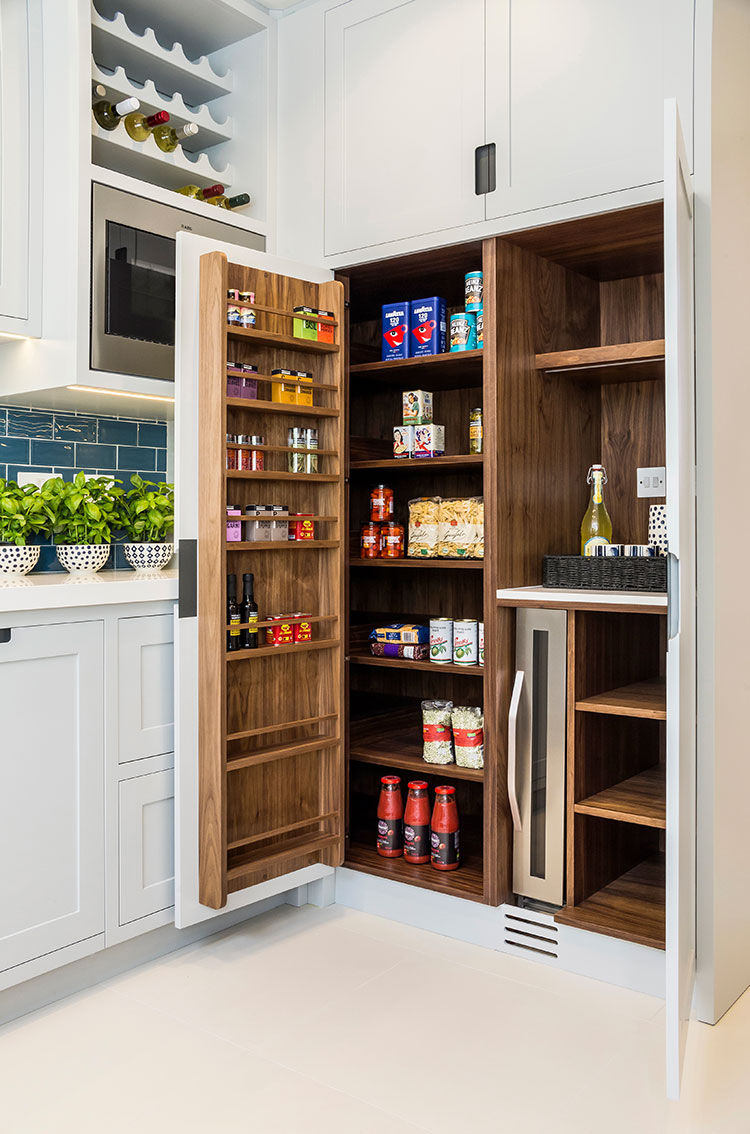 The kitchen extension, although a good size, was rather dark, with a wall of folding sliding doors on one side at the back overlooking the garden. The architectural style was traditional and in keeping with the architecture of the house. The rear extension was enhanced by adopting a contemporary aesthetic, installing folding sliding doors in dark grey aluminium on 2 sides, which allowed in copious amounts of light and gave a real sense of connection with the garden.

The existing kitchen was completely redesigned to suit the family. Creating a bespoke joinery kitchen in lacquer with walnut drawers and interiors. The styling was contemporary classic in soft colours with plenty of storage, including a generous larder and breakfast cupboard to house a kettle and toaster as well as a small wine fridge. Thus eliminating all clutter with everything being behind doors when not required. A Boston sink was specified along with a composite worktop and colour was added to the backsplash with ceramic deep blue tiles. Bespoke metal brackets were designed to suspend 3 glass pendant lights over the island below the glass skylight. 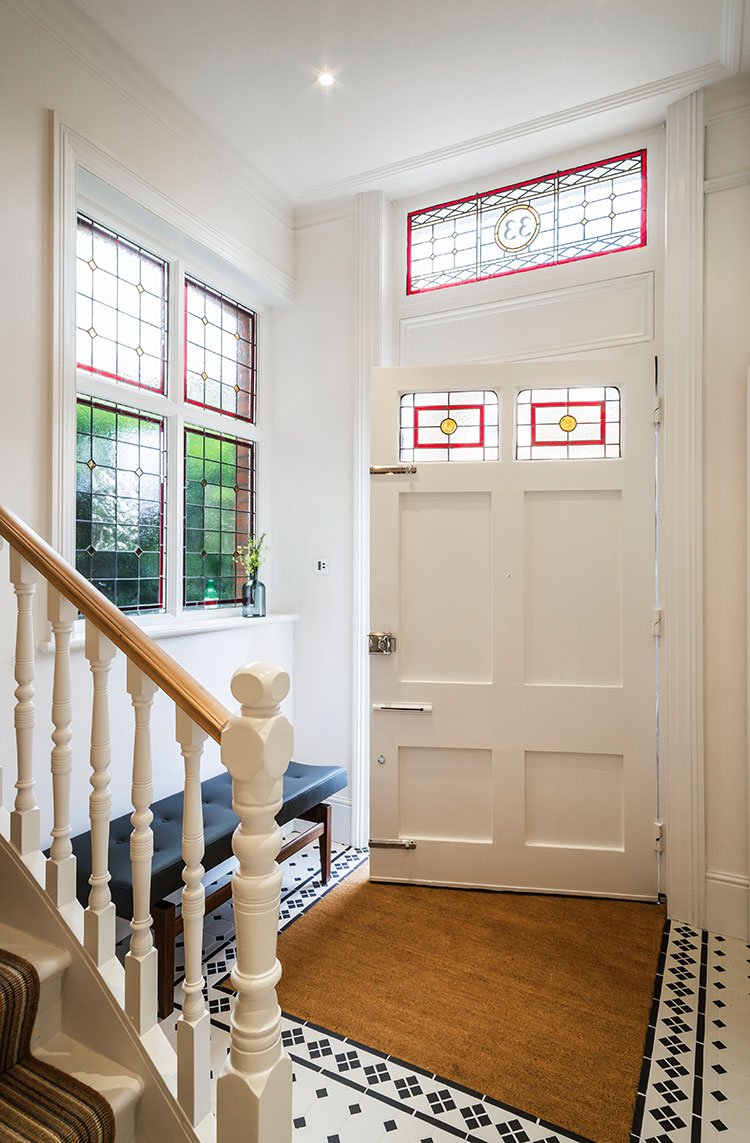 The dressing room was redesigned with bespoke oak full height joinery units to make the most of the space. The existing alcoves either side of the bed where stripped back and reinstated with lacquer interiors and a shadow gap detail around. Delicate downlights in the shelves added interest to the room. An accent ceiling light was added for dramatic effect.

The master ensuite, which overlooked the garden, was redesigned and fitted with a large double wall hung vanity unit, with elegant composite basins on a thick natural stone shelf with a lacquer vanity unit underneath, wall mounted taps and double mirrors above. A sculptural composite freestanding bath sits near the window. A large matt tile was specified for the floor, steps and wall, with a contrast ceramic polished narrow rectangular tile for the shower enclosure. Dramatic lighting under the vanity unit and in the shower alcove added to the sense of well-being. 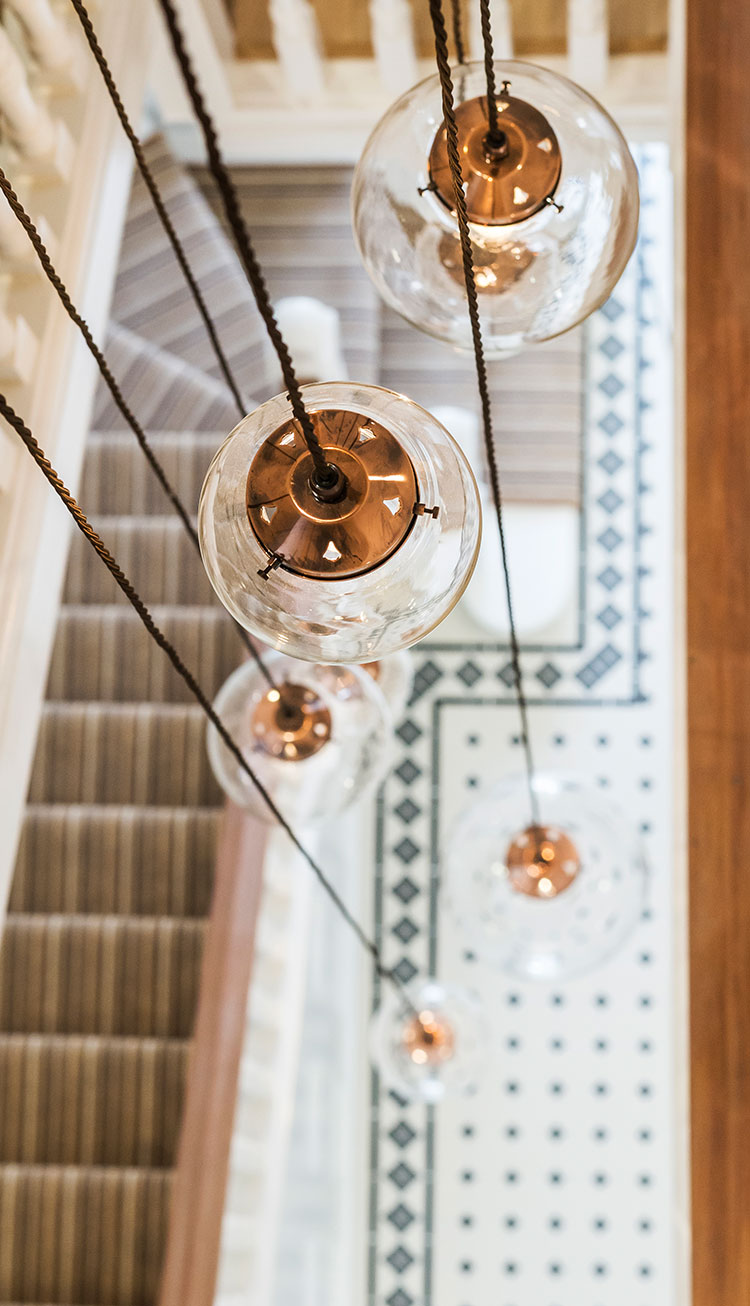 The Nursery suite was redesigned,with playful illustrated “cloud” Roman blinds and a colourful “watercolour dot” wallpaper. The ensuite bathroom was redesigned featuring a wall hung vanity unit with deck mounted basin and a bath with a shower over.

The third bedroom, on the half-landing, was designed as a fun playful child’s bedroom featuring a playful illustrated fox Roman blind. 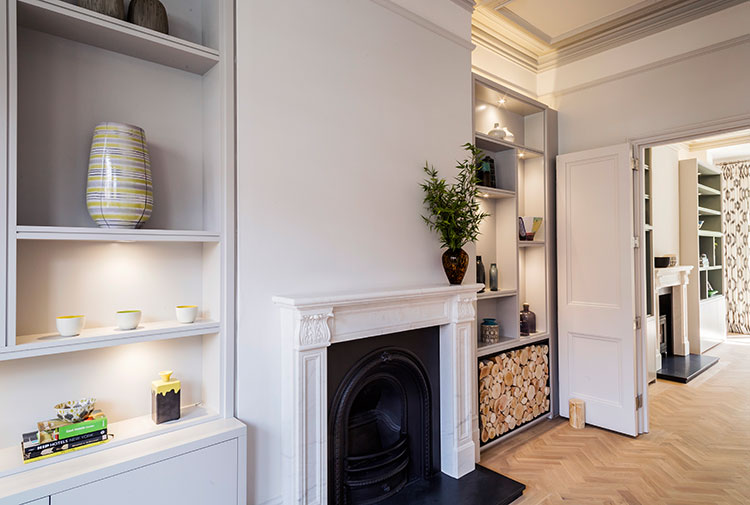 To enhance the interiors a new lighting scheme was designed and specified including new fittings and garden lighting which added to the feeling of the garden and terrace being an additional “Outdoor room”. An intelligent lighting system was installed in order to create moods, ambience and timed events internally and externally, controlled from wall mounted keypads and also by iPads/iPhones. 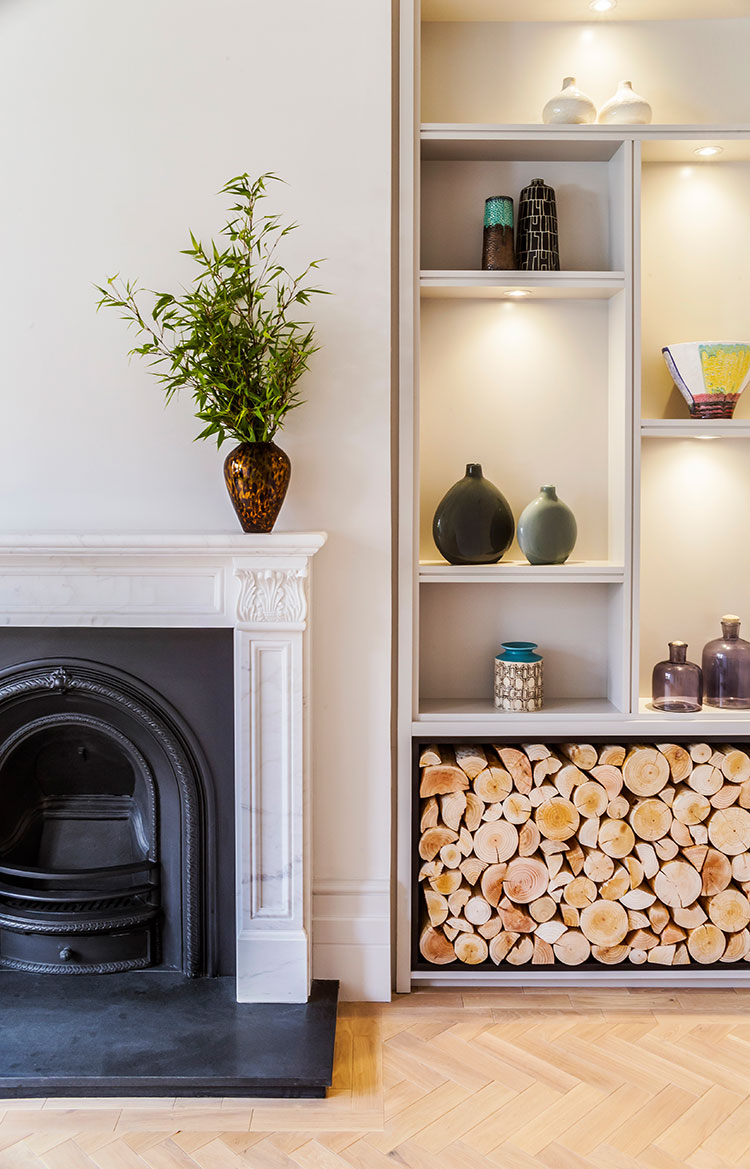 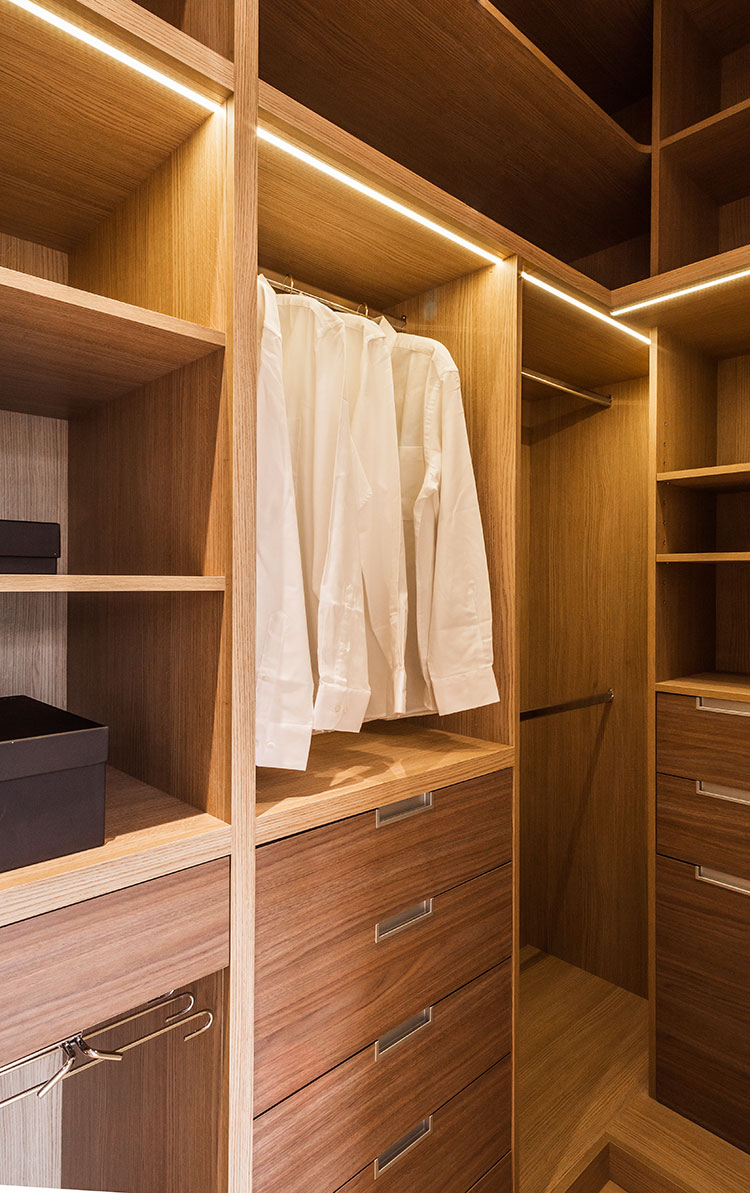 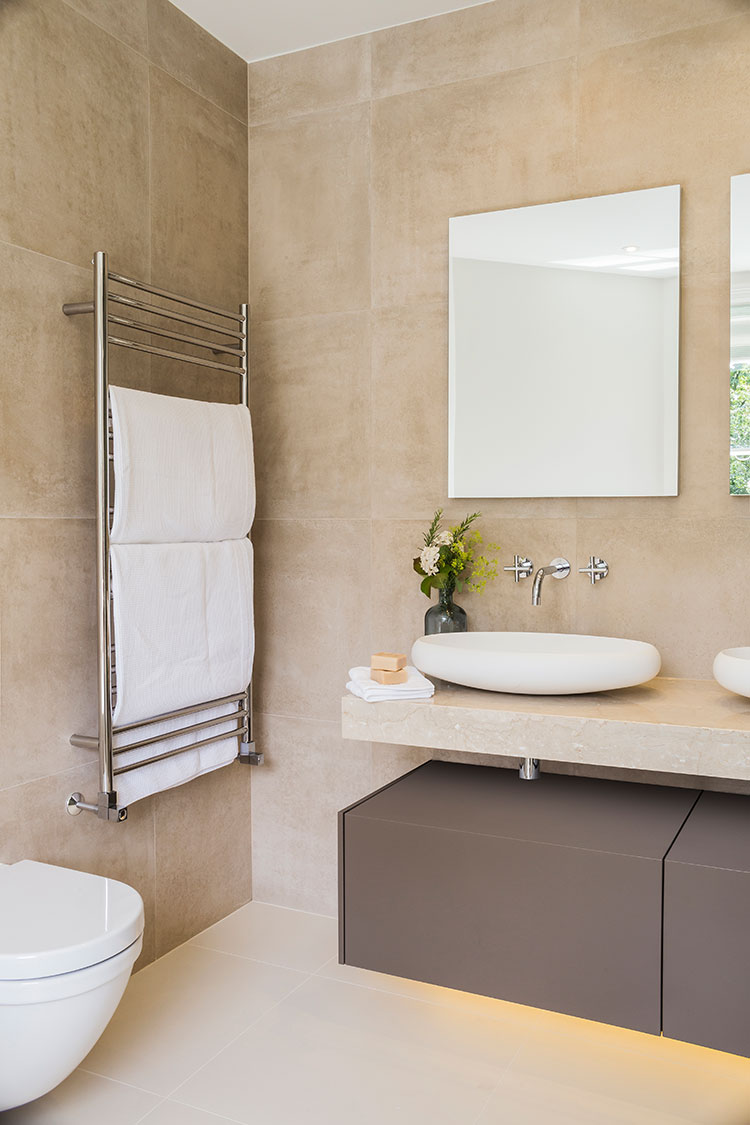 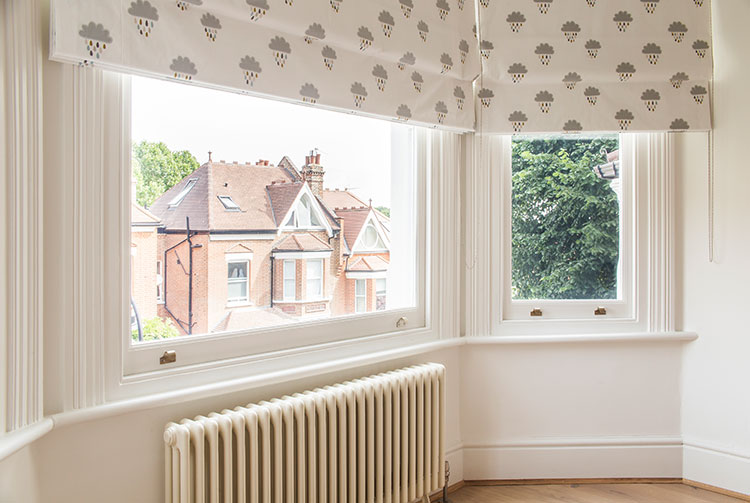 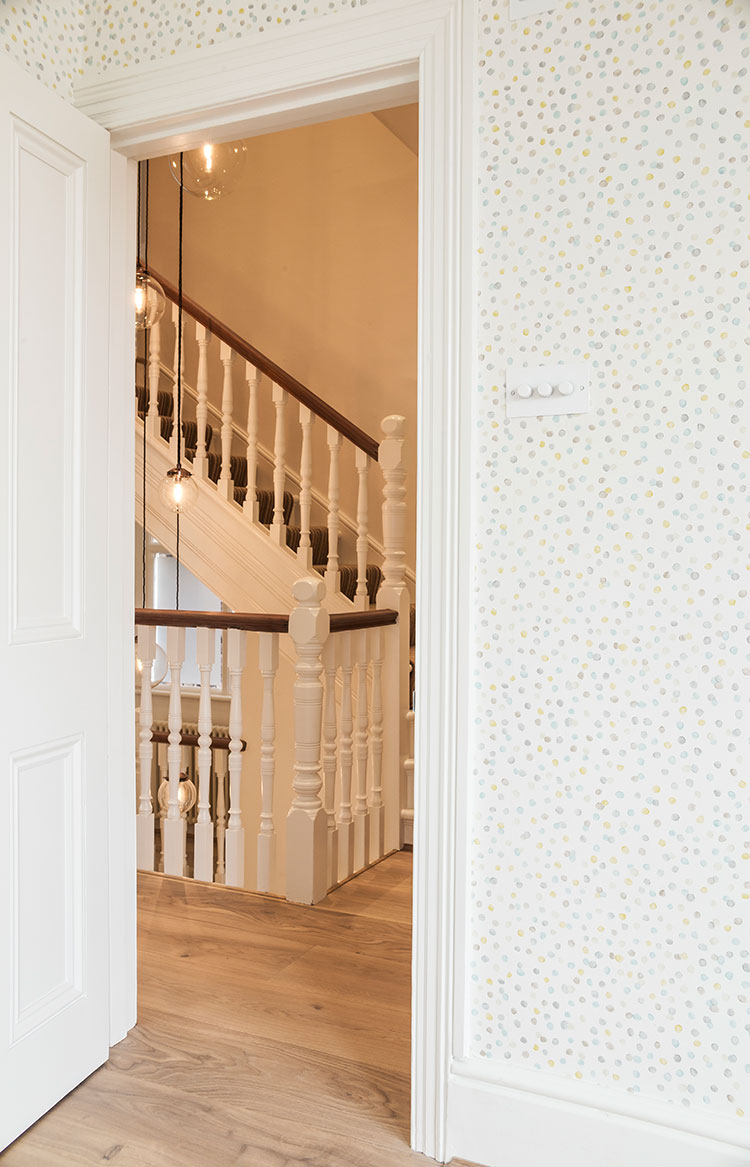 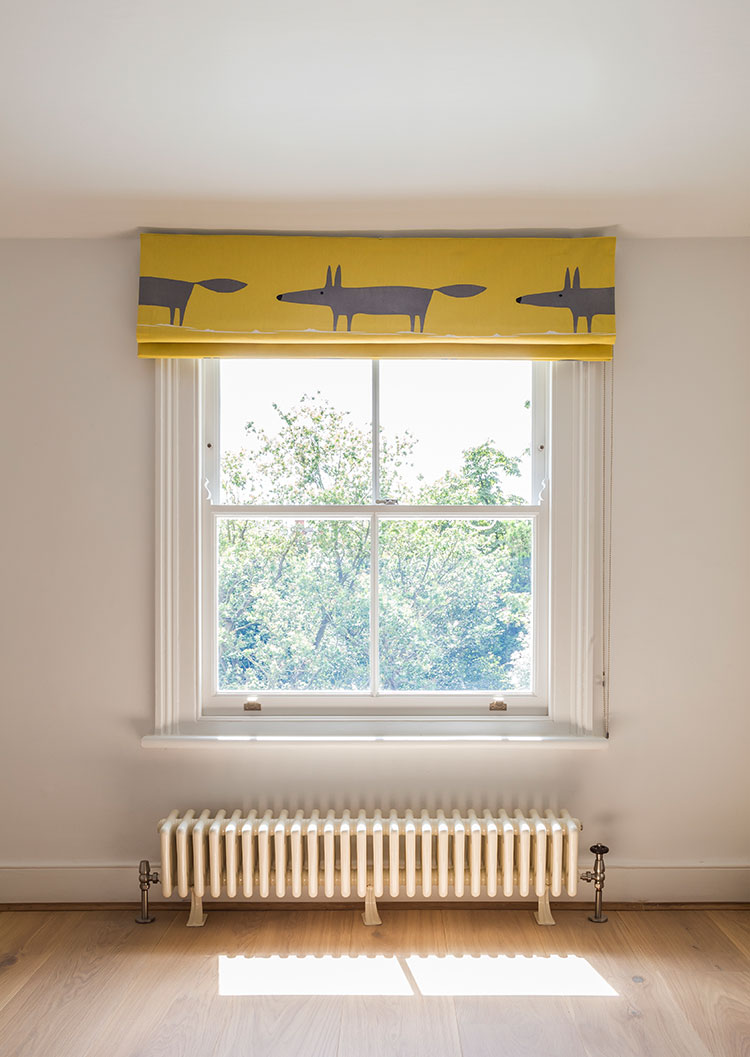