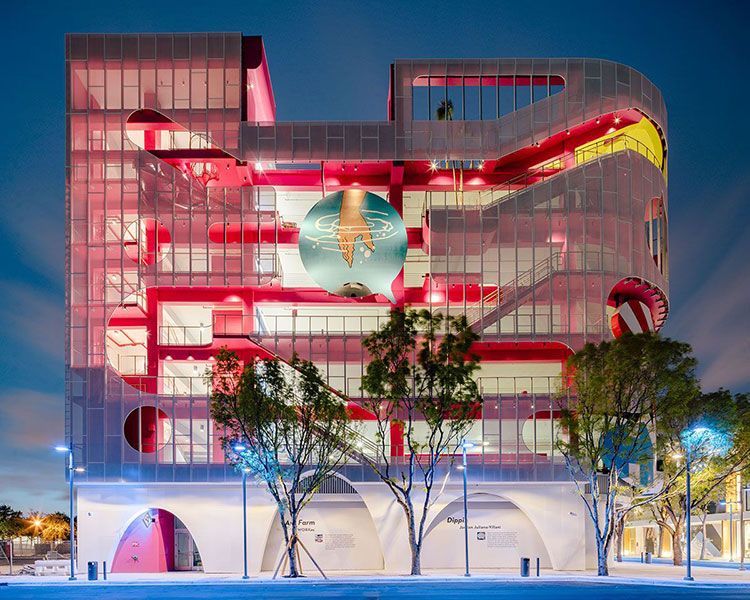 Bringing together these designers from around the world, Riley drew inspiration from the surrealist parlor game, Exquisite Corpse. Cadavre Exquis, as the game is known in French, involved a collection of images assembled by various artists with no regard or knowledge of what the other artists have drawn, producing one image whose components don’t necessarily match but flow together as one playful composition. Under Riley’s direction, each participating architect was eventually assigned an area and depth to build out and given free reign to create fully individual designs. The result is a unique modern, architectural version of the Exquisite Corpse. 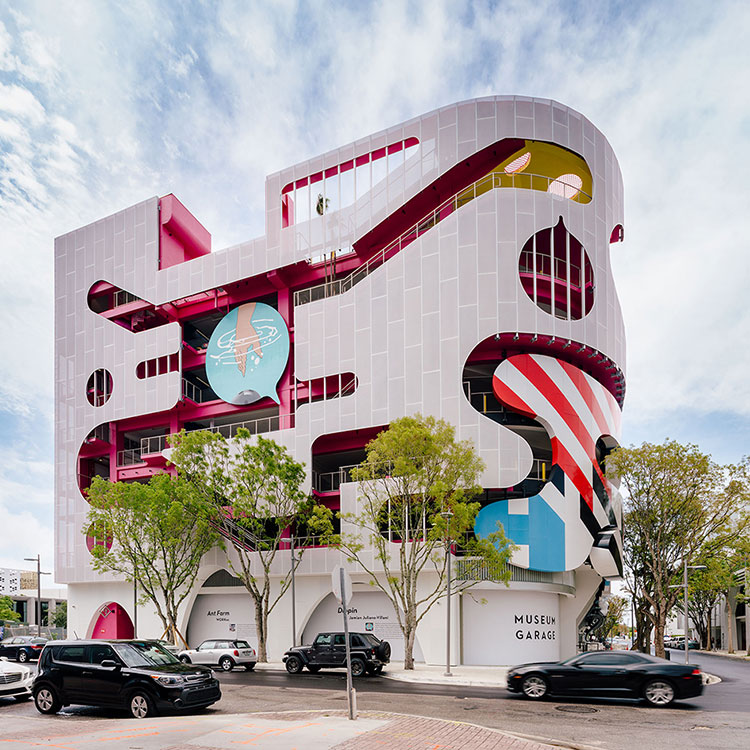 At the corner of NE 1st Avenue and NE 41st Street in the Design District, the work of the New York firm WORKac meets that of Berlinbased J.MAYER.H.  WORKac’s façade – titled Ant Farm – faces 1st Avenue and celebrates social interaction, sustainability, art, music, and the landscape. In an ant colony-inspired display of human activity, miniaturized public spaces – a garden, a lending library, art space, and playground – and their connecting circulation spaces appear and disappear behind a perforated metal screen that provides visual contrast, shade, and protection. 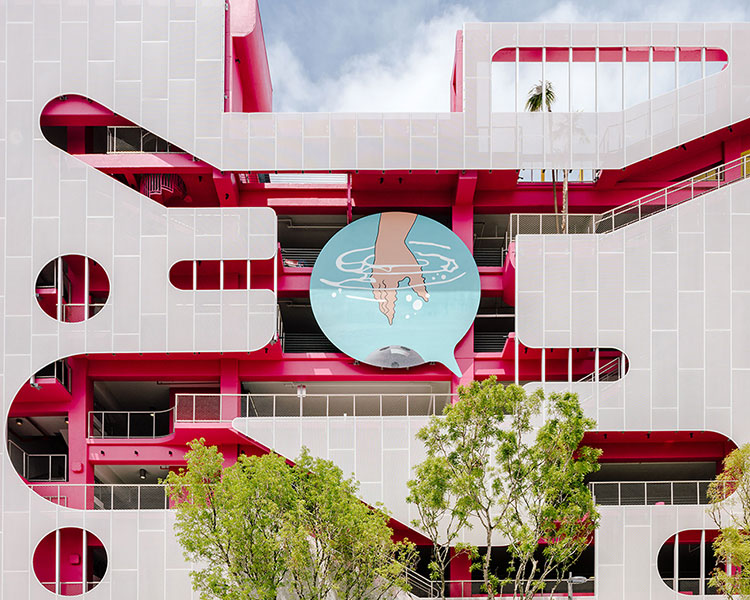 J.MAYER.H.’S façade – titled XOX (Hugs and Kisses) – appears as gigantic interlocking puzzle pieces that nestle at the corner with the forms of Workac’s façade. XOX then extends westward from the corner along 41st Street. XOX’s enigmatic forms, emblazoned with striping and bright colors, recall the aerodynamic forms of automotive design and appear to float above the sidewalk below. Smaller volumes, covered in metal screens project outward and are activated with embedded light at night. 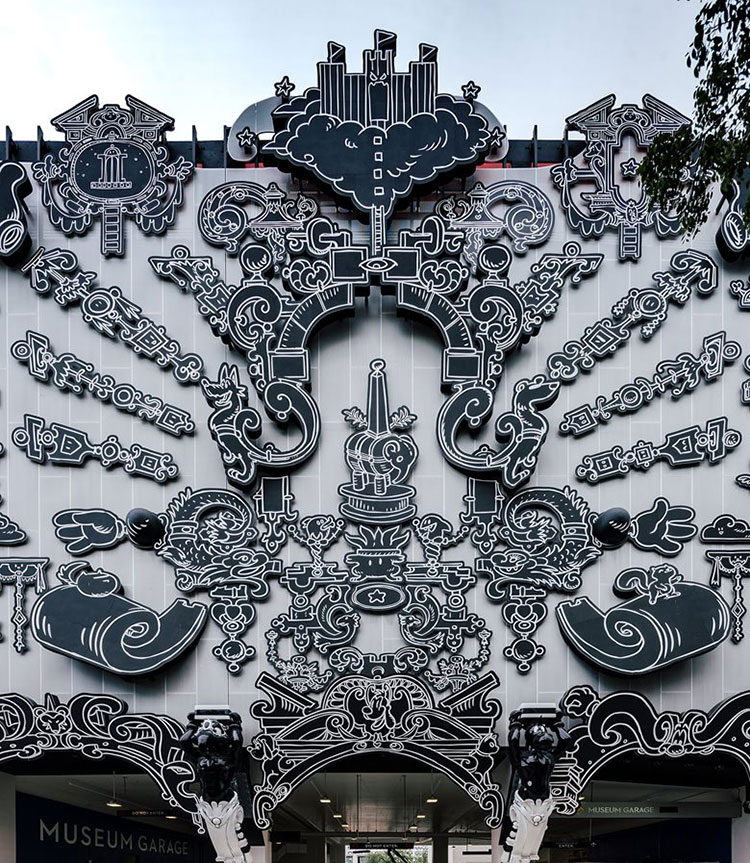 The next façade along 41st Street serves as the entrance and exit of the garage. It is the work of Nicolas Buffe – a French-born artist living in Japan – and is constructed with a dark perforated metal backdrop. The façade features a variety of diverse 2D and 3D elements crafted from lasercut metals and fiber resin plastic. At street level, the façade’s features four 23-foot tall, full 3D caryatids standing astride the garage’s arched entrance and exits. Like the caryatids below, the composition above reflects Buffe’s childhood passion for video games and Japanese animation. The result is the unexpected juxtaposition of anime, tokusatsu, and manga with Buffe’s other passion – Rococo and Baroque architecture. 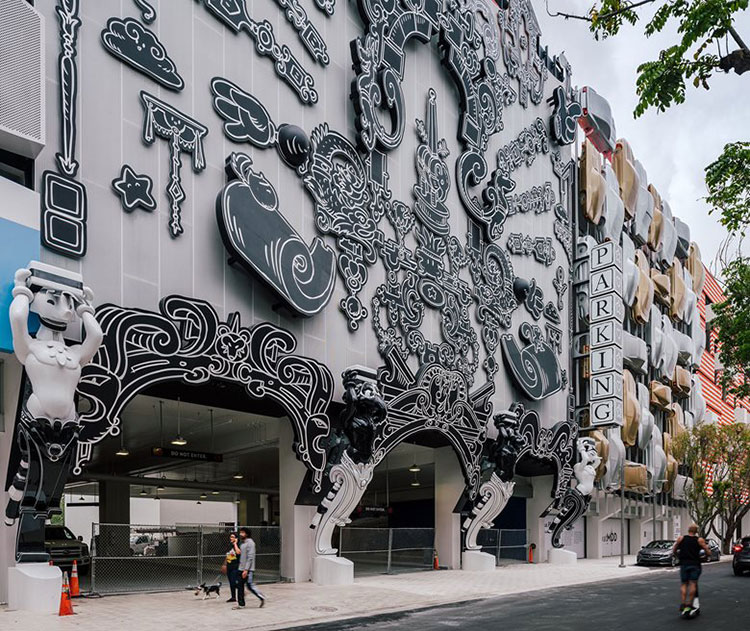 In the space between Nicolas Buffe’s facade and that of K/R, Spanish firm Clavel Arquitectos’s Urban Jam draws from the rebirth of urban life in the Miami Design District – where old structures and discarded spaces have been revived by architectural and urban designs. Urban Jam suggests a similar “repurposing” of very familiar elements, using 45 gravity-defying car bodies rendered in metallic gold and silver. In effect, the styles of years past gain a second life as lux sculptural objects caught in a surreal vertical traffic jam. 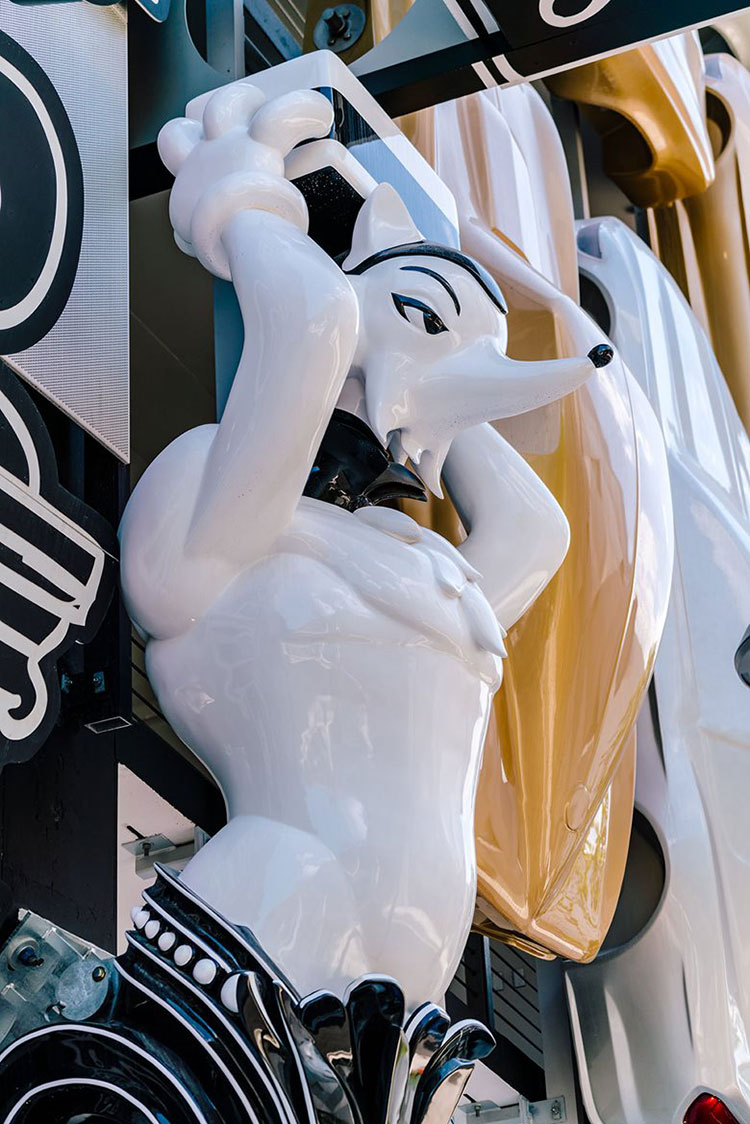 Furthest west on 41st Street, just opposite the Institute of Contemporary Art, is Barricades, designed by New York- and Miami-based K/R. The design is inspired by Miami’s automotive landscape; particularly it’s ubiquitous orange- and white-striped traffic barriers. In this case, the faux-barriers are turned right side up and form a brightly colored screen. The façade has fifteen “windows” framed in mirror stainless steel, through which concrete planters pop out above the sidewalk. 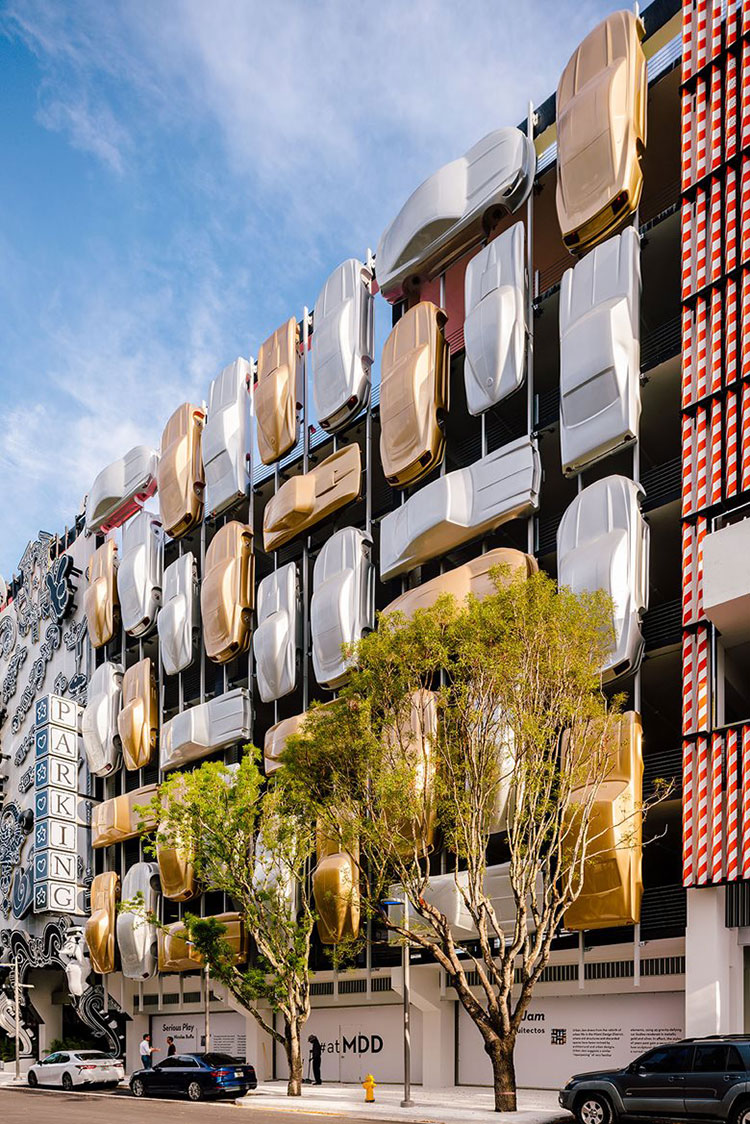 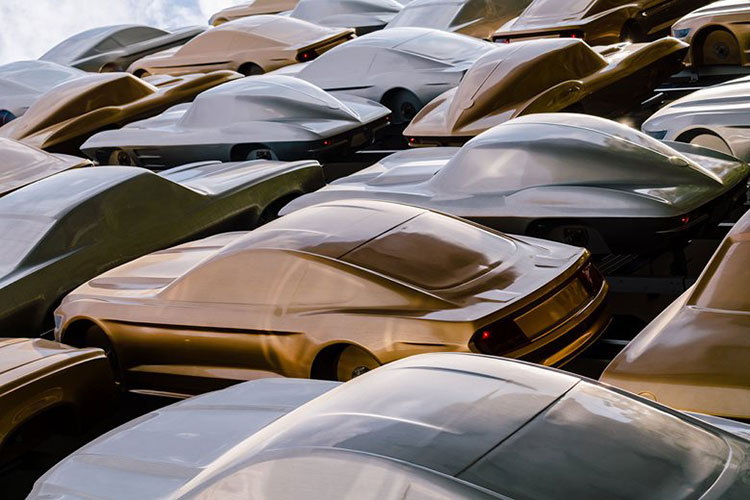 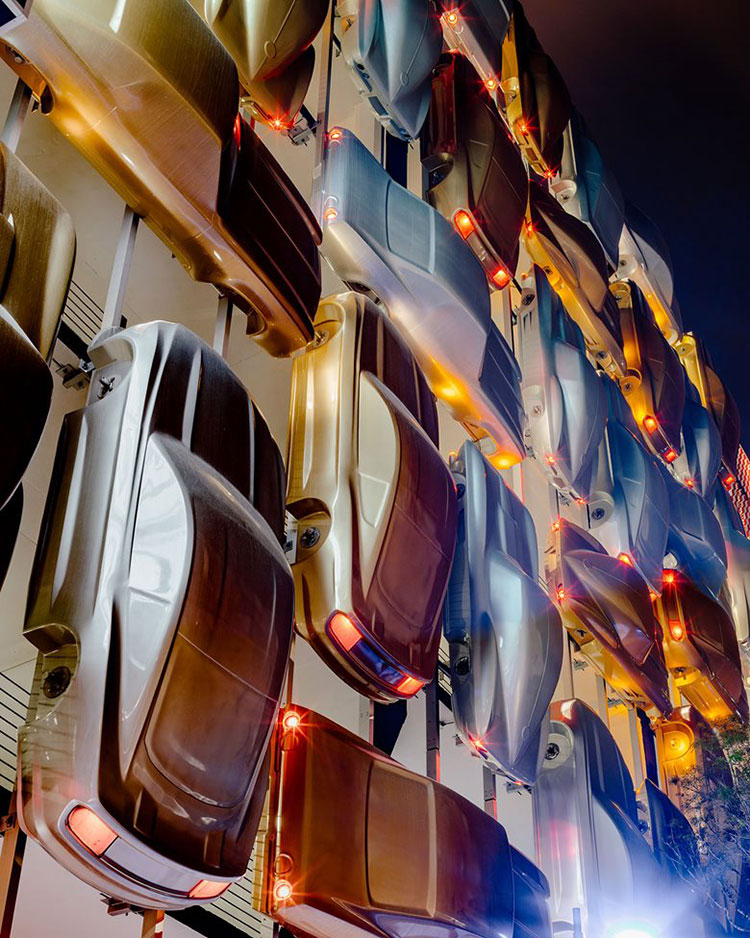 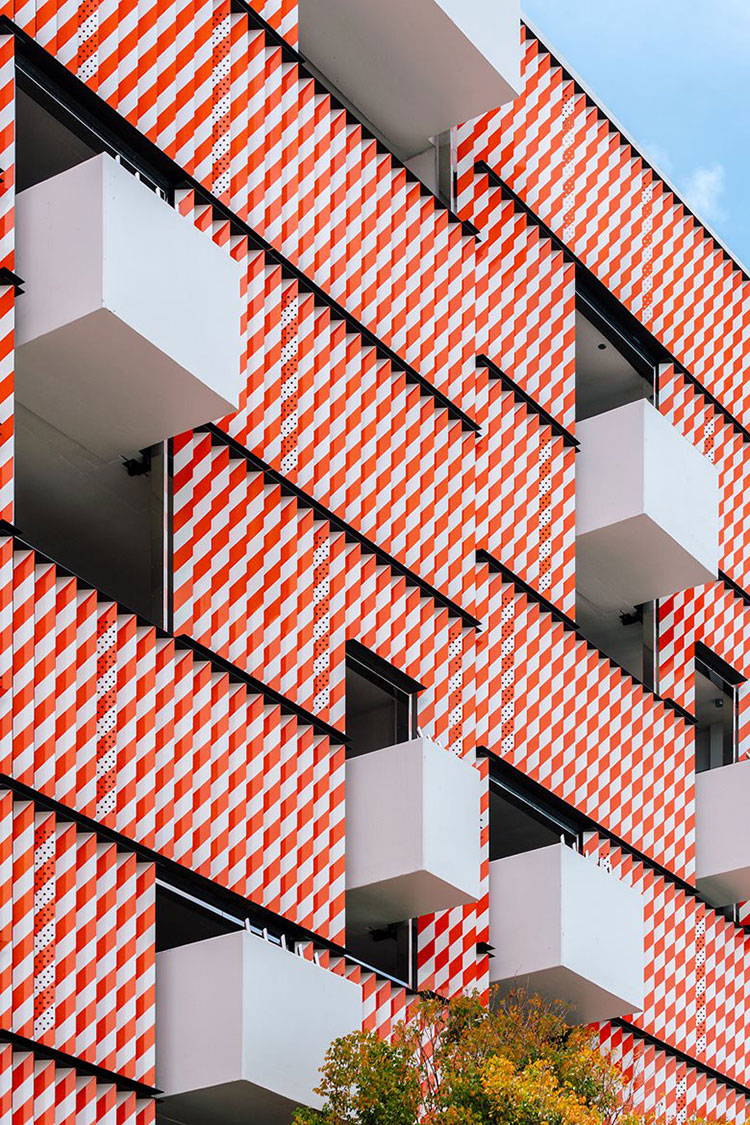 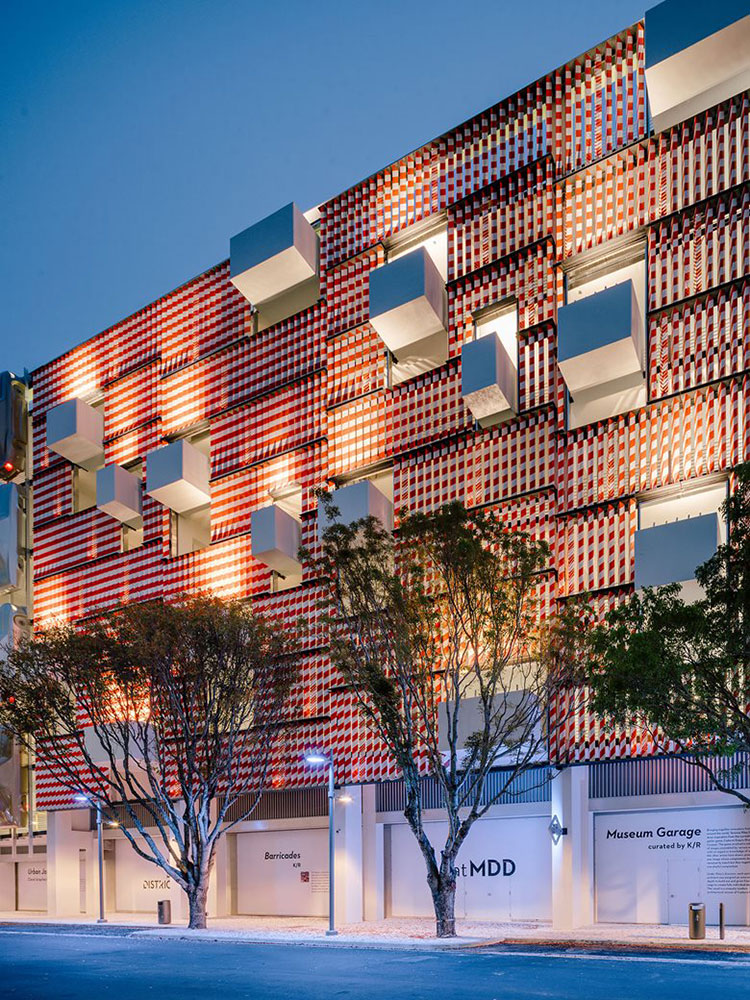