Over the course of 15 months in 2010 and 2011, Christchurch, the largest city of New Zealand’s South Island, was devastated by four major earthquakes that toppled a city known for its arts, culture and surrounding natural beauty. Schmidt Hammer Lassen Architects together with Architectus have designed Tūranga, a new central library project that is one of nine anchor projects identified as vital to the redevelopment of the city centre. 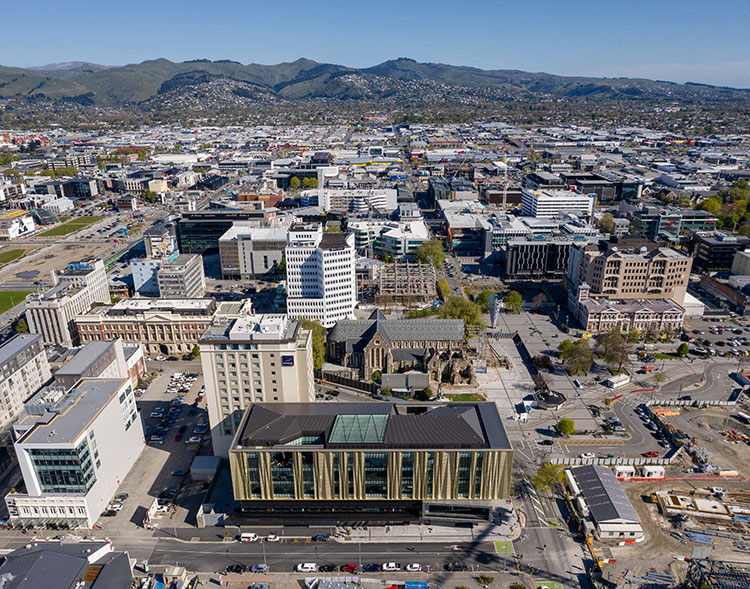 The new central library is a visually stunning symbol of hope, unity, and rebirth that will fundamentally change the way residents and visitors experience Christchurch’s city centre. In collaboration with local architectural firm Architectus, Schmidt Hammer Lassen relied on its vast library experience to design and deliver a building that is at once fortuitous and deliberate.

“Tūranga is the kind of multi-faceted project that layers architectural interest with significant cultural relevance,” said Morten Schmidt, Founding Partner at Schmidt Hammer Lassen, lead designers of the library. “It has been a privilege to design a project that not only fulfills the need for a new central library, but also one whose mission of restoring the soul of the city includes the deep cultural heritage of Ngāi Tūāhuriri, the local Māori people.” 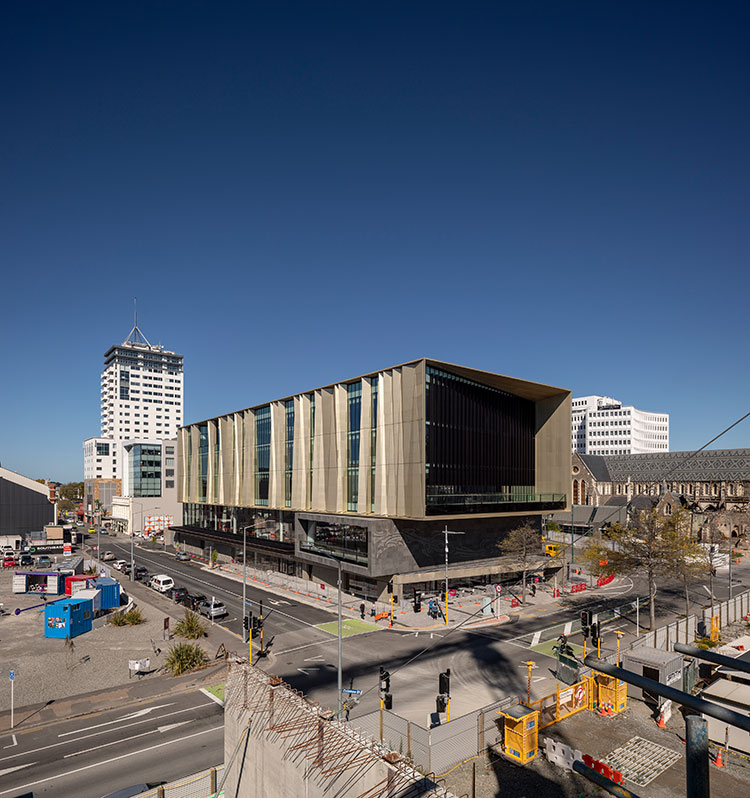 The design of the five-story, 9,500-square-metre library in Christchurch’s historic Cathedral Square supports the city’s desire for a public space that strengthens the community, advances literacy and lifetime learning, celebrates diversity of culture and heritage, draws people back to the city centre, and fosters innovation. Early in the design process, the architects collaborated with Matapopore Charitable Trust, an organization whose objective is to ensure the values, aspirations and narratives of the local Ngāi Tūāhuriri people are realized throughout the recovery of Christchurch. Their influence on the design of the building is substantial—from building materials to physical orientation, there is a rich tapestry of ancestry, traditional knowledge, and culture woven throughout Tūranga. 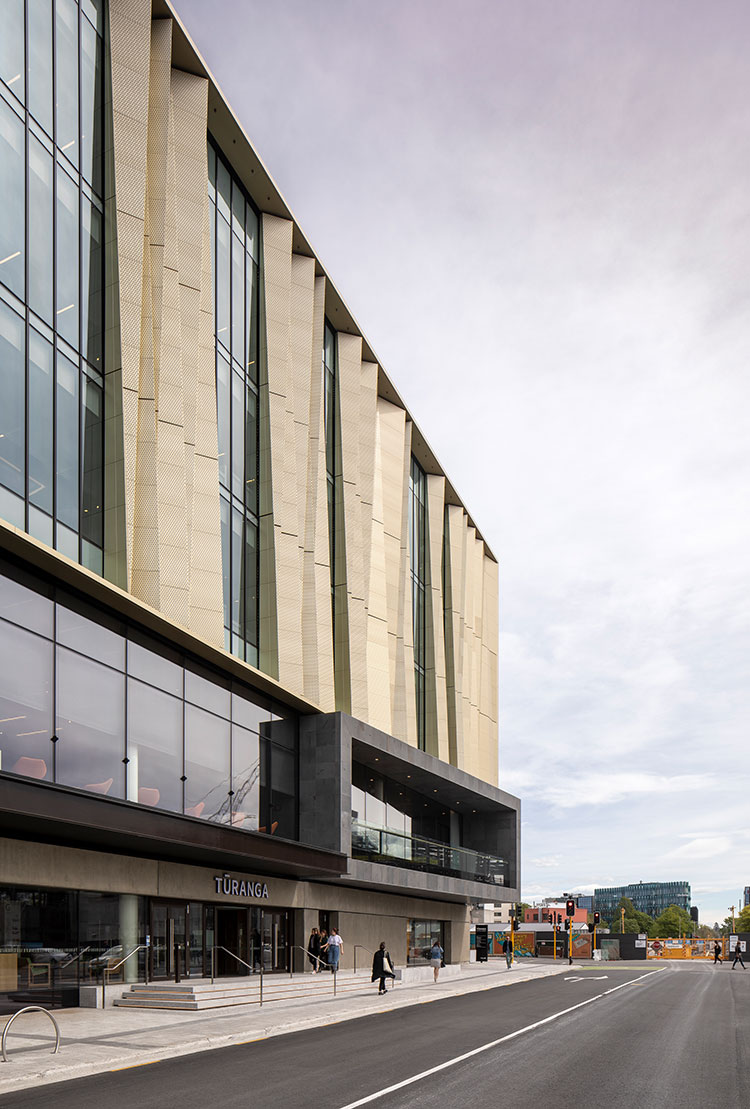 This cultural representation is first evident in the golden veil that cloaks the building in a striking, graphic façade. Its visual quality intensifies at sunset when the day’s last rays of light draw out a depth of sheen. The vacillating form of the veil is inspired by the surrounding rolling hills that can be seen from the upper floors of the library, and the long, thick blades of the local harakeke flax that is a fundamental natural resource for traditional cultural practices.

As library-goers approach the building, they are drawn into the informal, welcoming entrance that connects the library with Cathedral Square and surrounding buildings. The ground floor is a continuation of the public realm of the square, which is one of Christchurch’s key urban spaces for public gatherings, events, markets and performances. The open, inviting entrance evokes the important cultural concept of whakamanuhiri, the warm and welcoming ‘bringing-in’ of arriving visitors.

Inside the entrance is a café, as well as a technology and innovation zone that features a seven-meter, state-of-the-art touchscreen wall. The reception area wall is adorned with a striking graphic that depicts local birds on a journey of discovery, searching into the unknown. Across the space at the main lift core, this design extends vertically upwards through all floors with multi-colored transitions of flora and fauna important to Ngāi Tahu, the local Māori tribe. 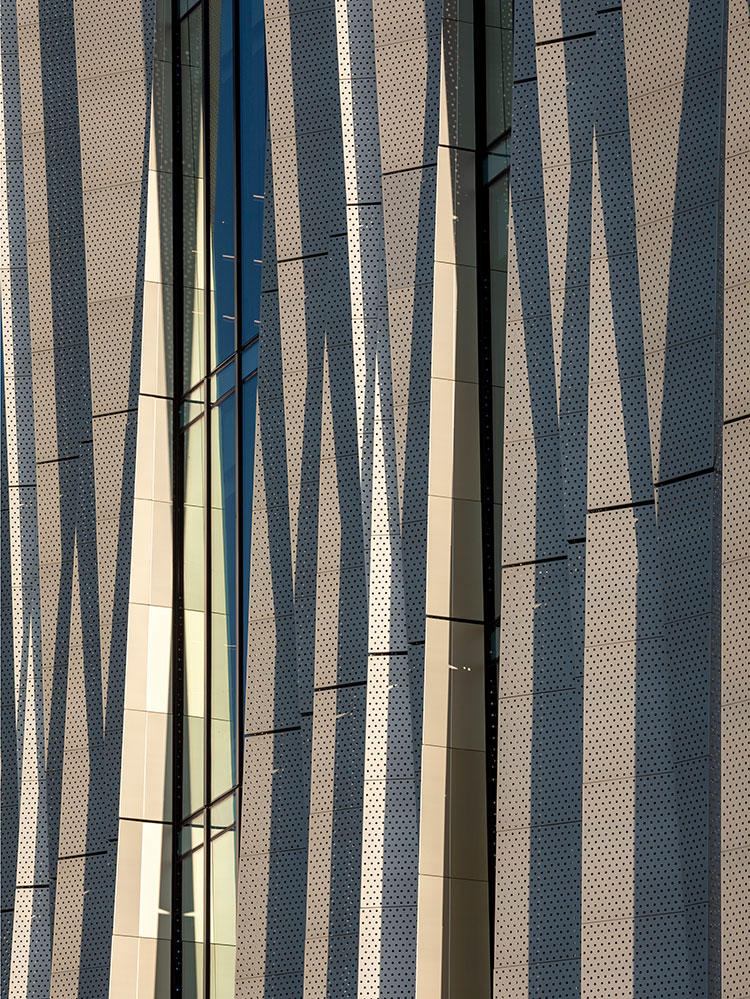 In an effort to enhance the civic activities of Cathedral Square, the second level houses a Community Arena—a space for the people of Christchurch to discuss, debate, share, and celebrate. The Community Arena is expressed as a distinct volume within the form of the library and is positioned to maximize its visual connection to the square. The second level of the library is also home to Ngā Purapura, a children’s area named for Ngāi Tahu ancestral traditions. Ngā Purapura includes a children’s reading cave and an activity room. 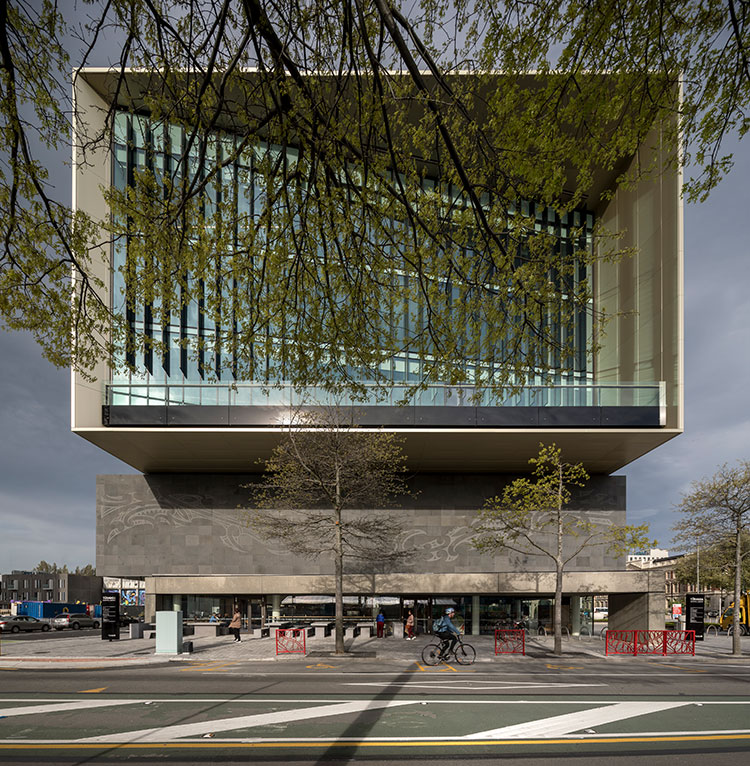 Ascending further into the library, the upper three floors house various book collections, staff offices, meeting and study rooms, a production studio, a computer lab, and a music studio among other functions. Several points in the Canterbury landscape, including the Southern Alps and the Banks Peninsula, are visible from the upper levels of the library and drove the placement and orientation of the roof terraces.

One of the two roof terraces is orientated to the north and northeast towards significant Ngāi Tūāhuriri landmarks including Mount Grey; Tuahiwi, the rural settlement and locus of Ngāi Tūāhuriri activity; and Hawaiiki, the ancestral homeland of New Zealand Māori located in the wider Pacific. A second, south-facing terrace sets a strong relationship to Christchurch Cathedral and Banks Peninsula, and further south to the Muttonbird Islands and southern boundaries of Ngāi Tahu.

The building’s five levels are connected by a grand, staggered atrium featuring a social staircase for gathering, reading, and resting. The design of the atrium references Tāwhaki, a superhuman from ancestral traditions, and his determined pursuit of knowledge in his ascent through the heavens. Puaka, a significant star for the local Ngāi Tahu tribe, is referenced in the patterned skylights above the atrium. 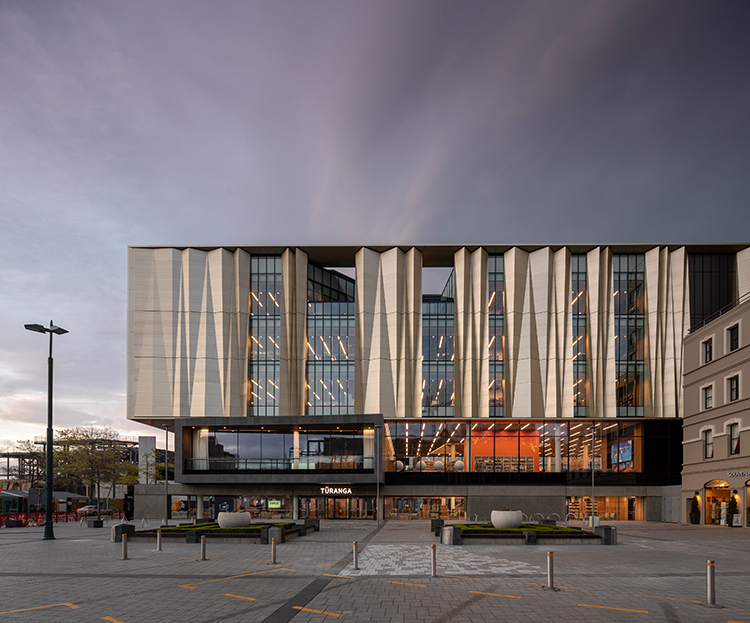 Lewis Bradford Consulting Engineers, the structural engineering firm on the project, was instrumental in developing a structure that could withstand future potential earthquakes of the magnitude that destroyed so many of Christchurch’s buildings in 2011.Tūranga was constructed to very stringent performance criteria, and is designed to sustain minimal structural damage during a large earthquake thanks to an integrated, self-centering mechanism that allows the building to sway and then return to its original position. 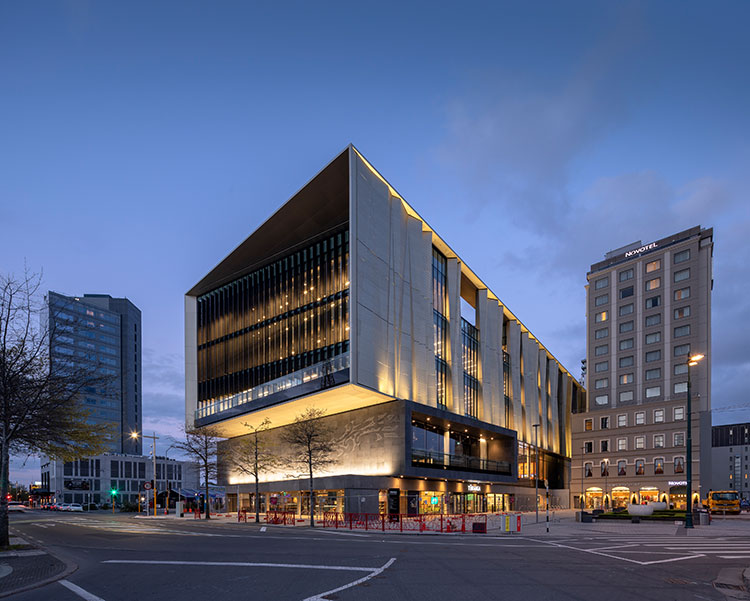 Part of the innovative set up is a seismic force-resisting system made up of a series of large-scale concrete walls that can rock and shift to isolate the building from peak earthquake accelerations during a significant seismic event. Each wall has high tensile, pre-tensioned steel cables that clamp the wall to the foundations with approximately 1,000 tonnes of force per wall. The stretch of these cables return the building to its original position after an earthquake, ensuring the library will stand as a unifying landmark in Christchurch for generations to come. 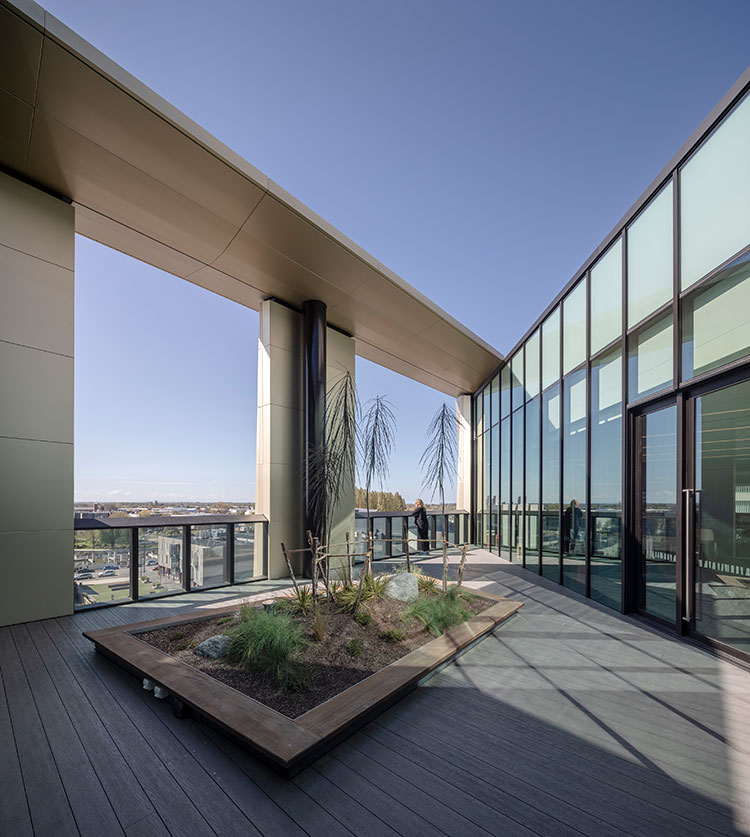 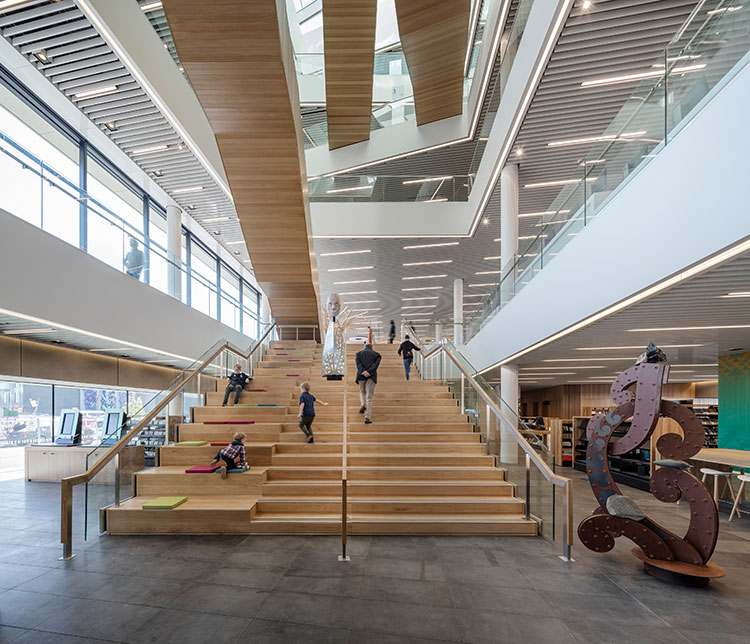 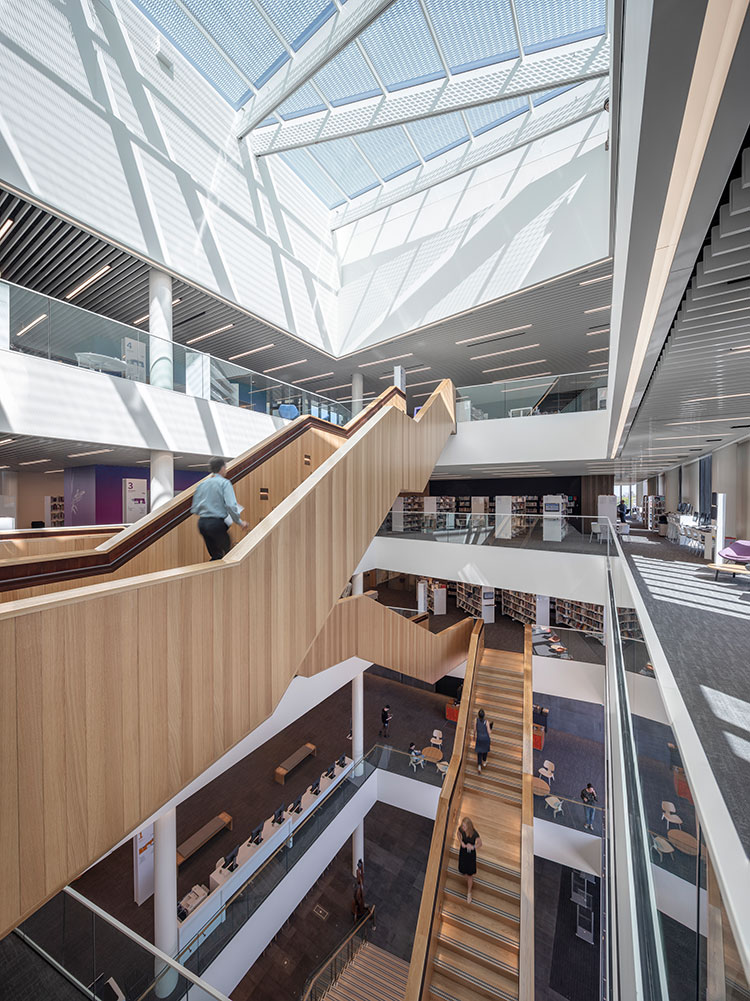 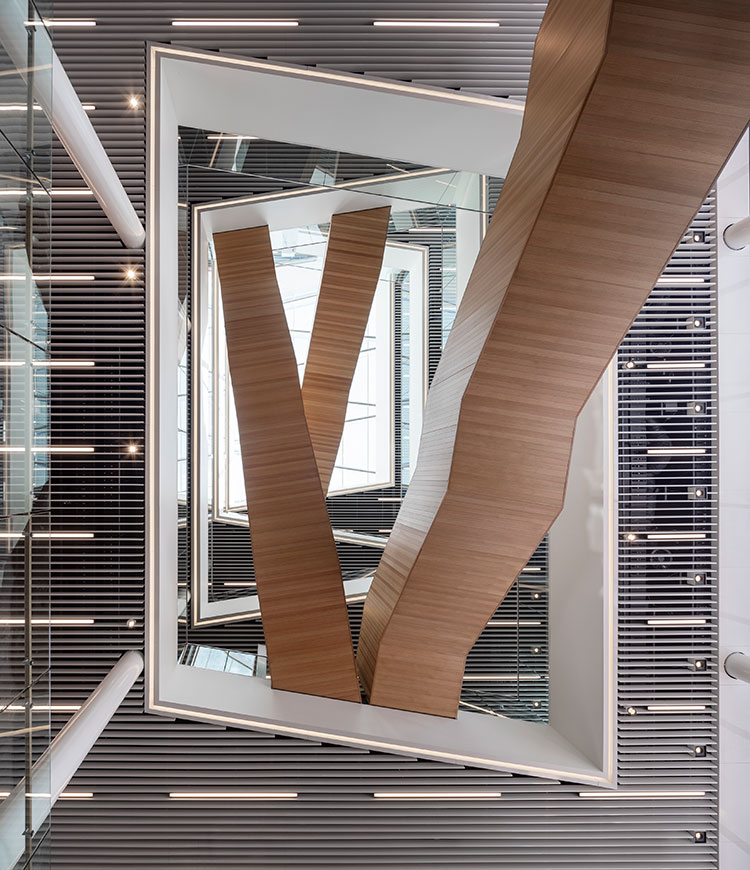 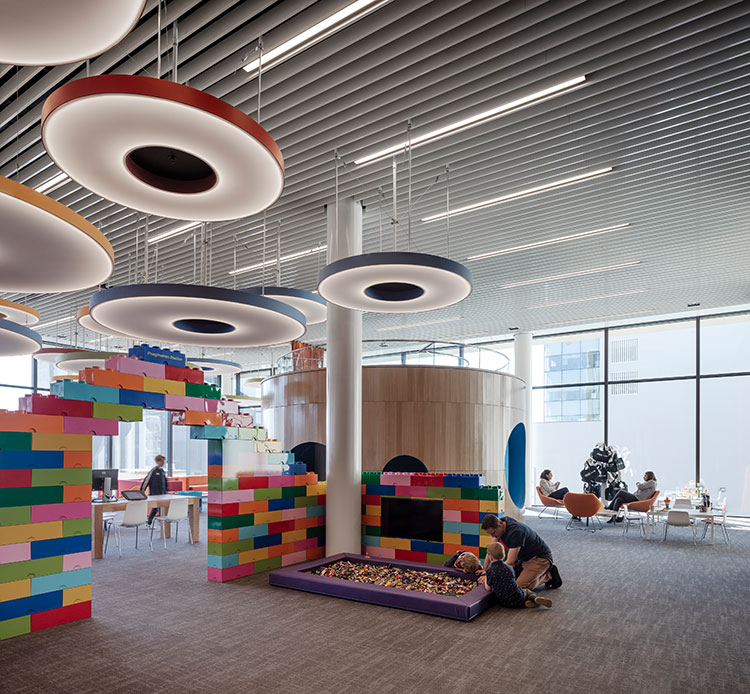 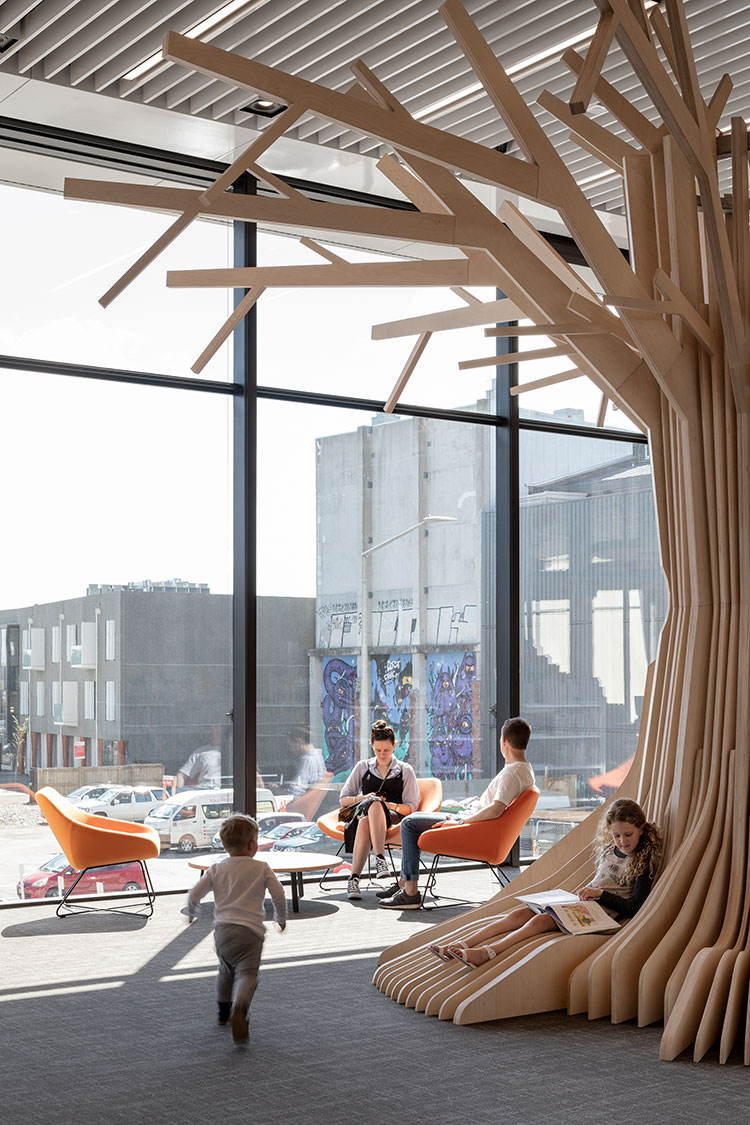