A copper roof culminating in a skylight draws daylight down into Gianni Botsford Architects’ House in a Garden, a highly unusual dwelling accessed through a narrow passage alongside a 1840s Notting Hill villa. The House in a Garden started out as a project on a plot of land the architects themselves intended to develop having been aware of the potential of the site for over 15 years. This involved the demolition of a 1960s bungalow and its replacement with a largely subterranean house. 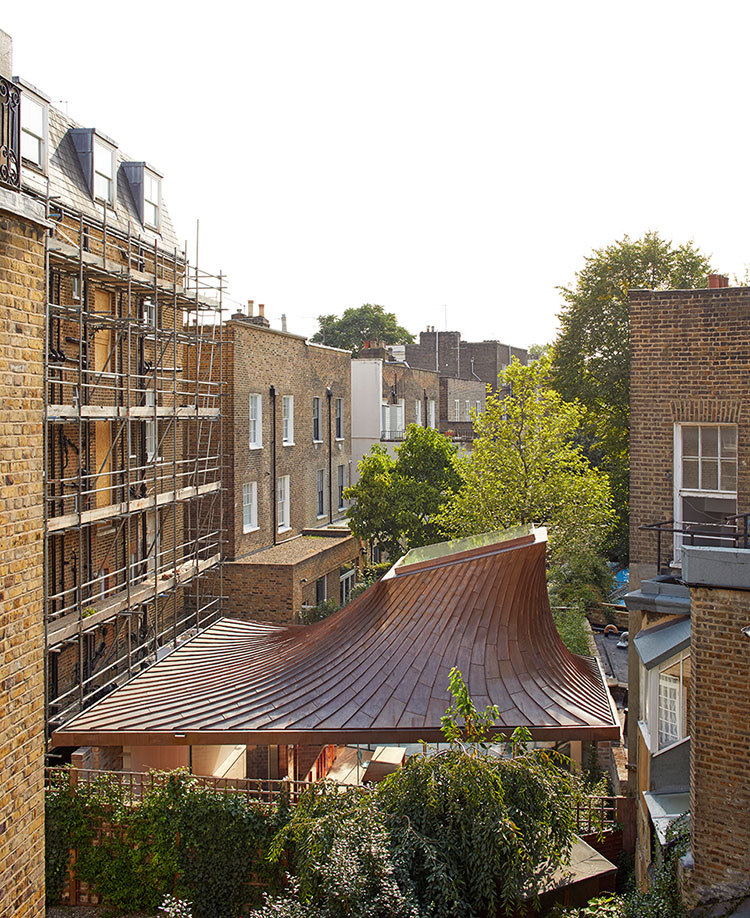 Externally the most visible component of the house is its pavilion like a copper-clad roof. Inside, the roof comprises of a complex glulam timber structure made from spruce, its double curvature concluding in a glazed oculus. The roof has a floating quality set above a glass-walled living room that enhances a sense of lightness while connecting the interior of the house to the surrounding landscaped garden as well as to its urban context. 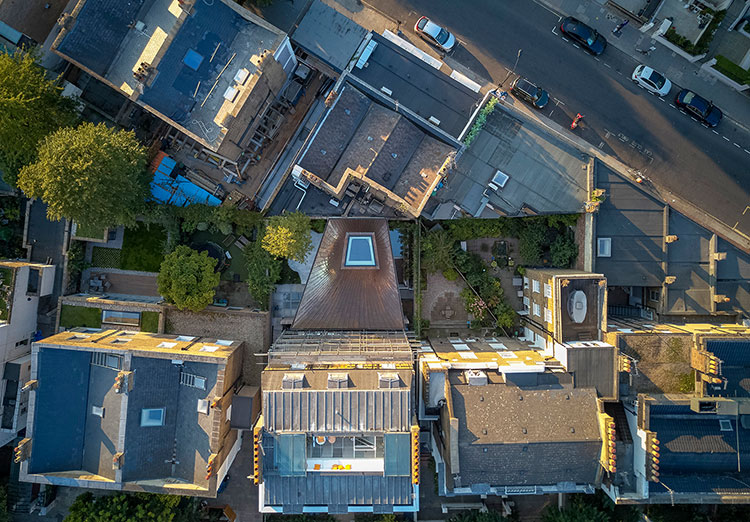 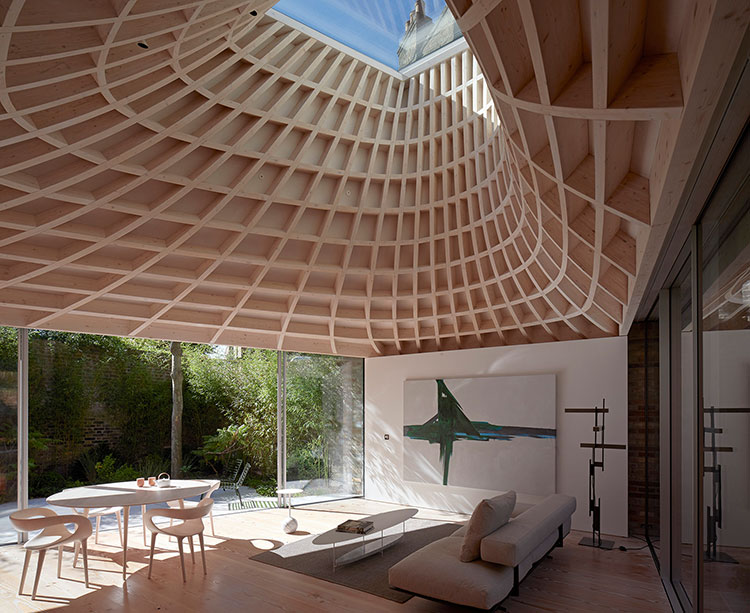 Copper recurs throughout the house, in surfaces of the ground floor kitchen and in detailing of rooms below, adding a subtle tonal warmth to the interior. As a natural material mined from the earth, copper resonates well with the idea of much of the house being shaped underground. It also reflects light. 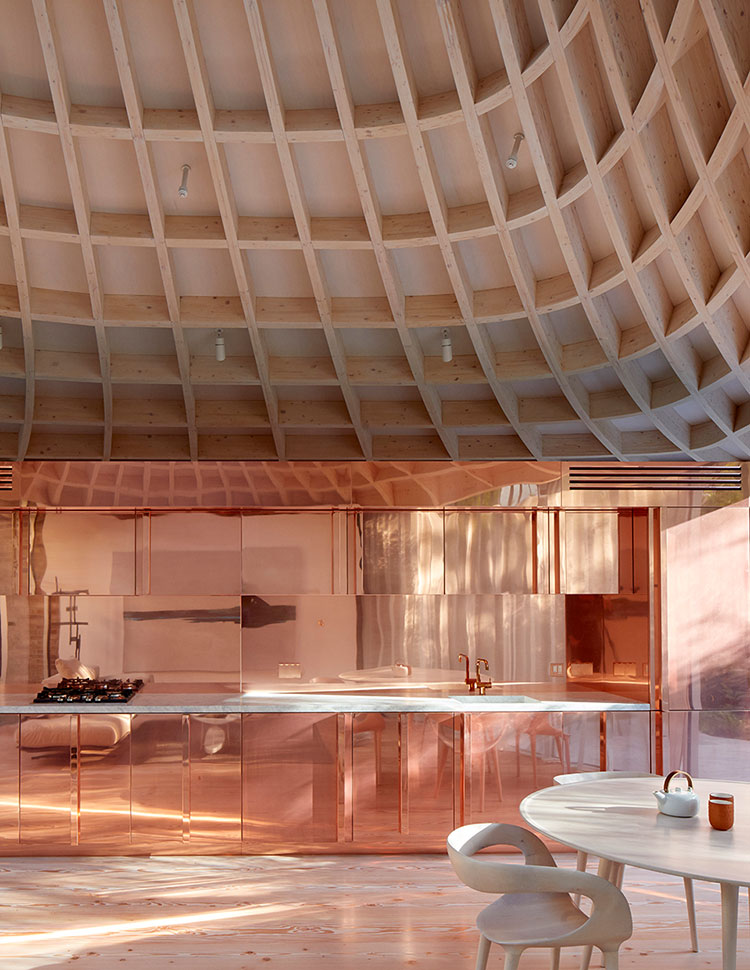 There are two levels below the ground floor. Bedrooms are immediately below ground, while there is a generous living/ gallery area with a 10 meter long swimming pool on a level further below. Light wells and skylights are designed to optimize daylight casting toplight onto the walls of lower ground floors.

Introducing daylight to a depth of up to eight meters was a challenge especially as the site of the house is tight and north facing. Digital analysis tools were used to seek out the three-dimensional possibilities that light gives in terms of generating the form and organization of the building.

The contrast between the cool and warm tones of Douglas Fir and carved Carrara marble adds to the sensual quality of the underground spaces as does the carefully studied play of light against darkness. As marble is quarried from the earth, it feels consistent with these spaces carved from a plot of urban land. In this way, materially it has a similar effect to the use of mined copper in the house. 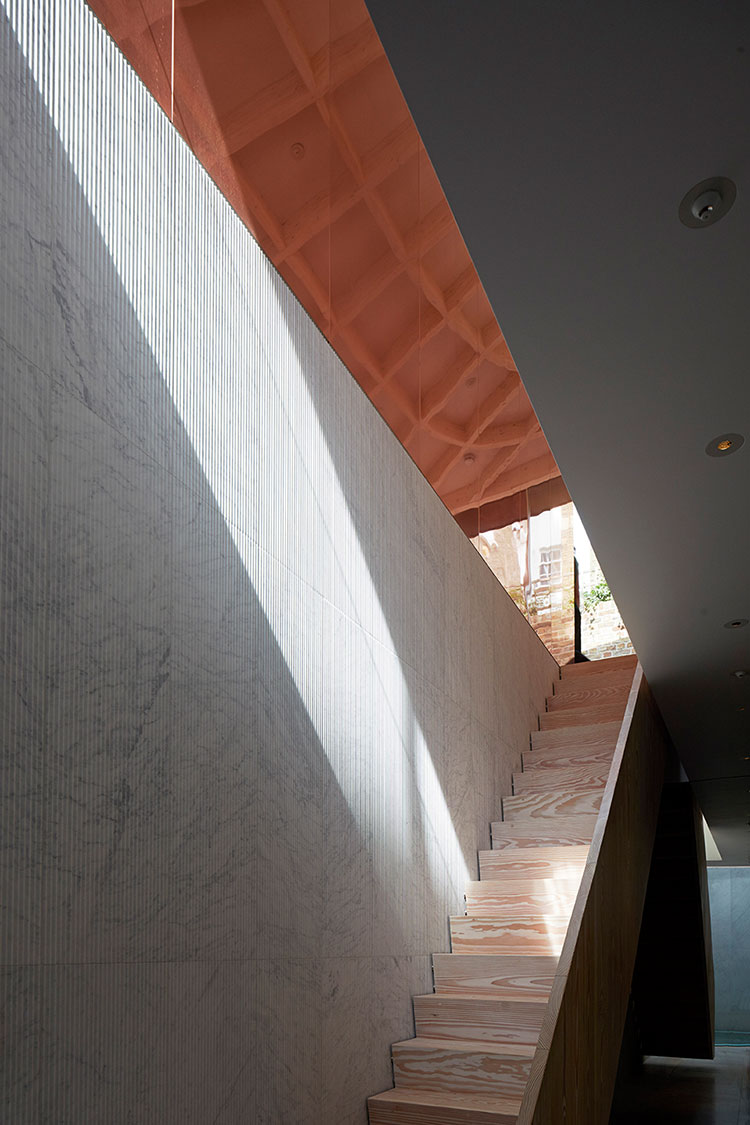 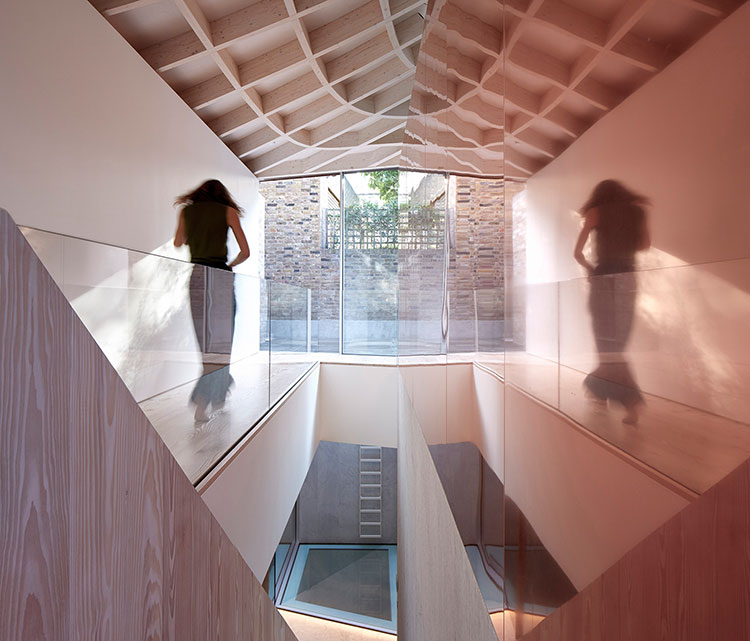 The House in a Garden builds on Gianni Botsford Architects’ earlier preoccupations with the manipulation of natural light throughout the day and through the seasons, enriching, enlivening and, ultimately, defining the nature of the architecture. “To build with light and darkness is to work with what a context gives you – a unique set of constraints and opportunities,” says Gianni Botsford. “Shaped and informed by the light and shadow that surround it, the roof’s tent-like form creates a new place for life to occur in the house – one that turns its back on the large volumes surrounding it and embraces the site.” 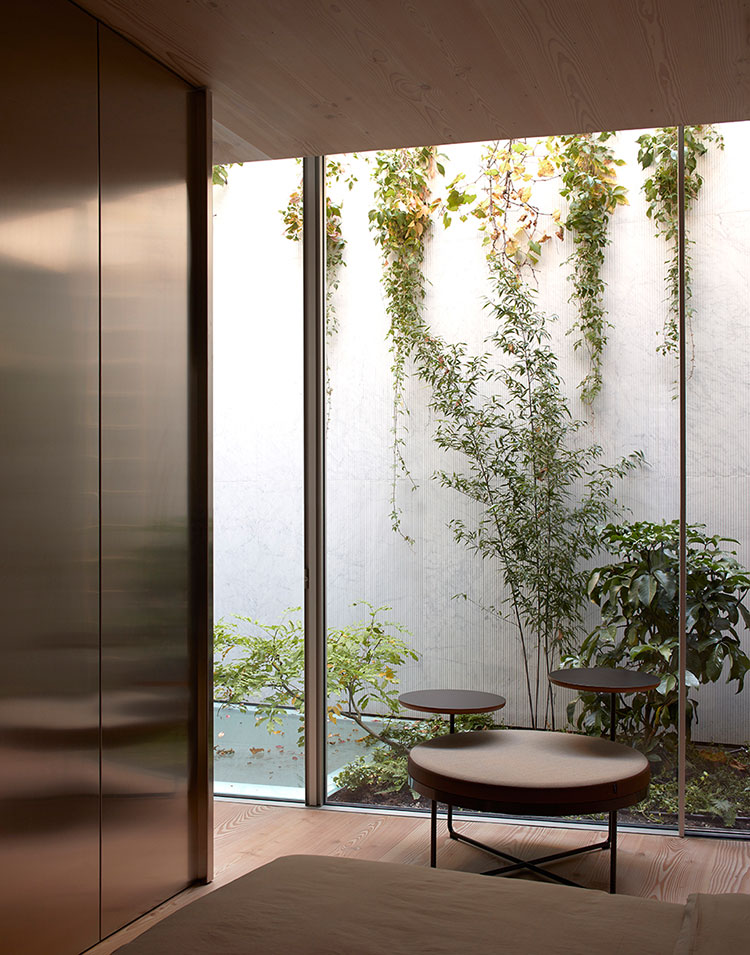 Each individual and unique piece of the timber roof structure is curving in three directions and was pre-fabricated in the Dolomites from three-dimensional models Gianni Botsford Architects provided. The pieces were then brought to the site and craned into position in eight sections.  Gianni Botsford summarises the concept for roof, “Designed, modeled and fabricated using both digital and manual processes each feeding the other, the intensity of the complex timber roof structure belies its warm domestic scale and character.” 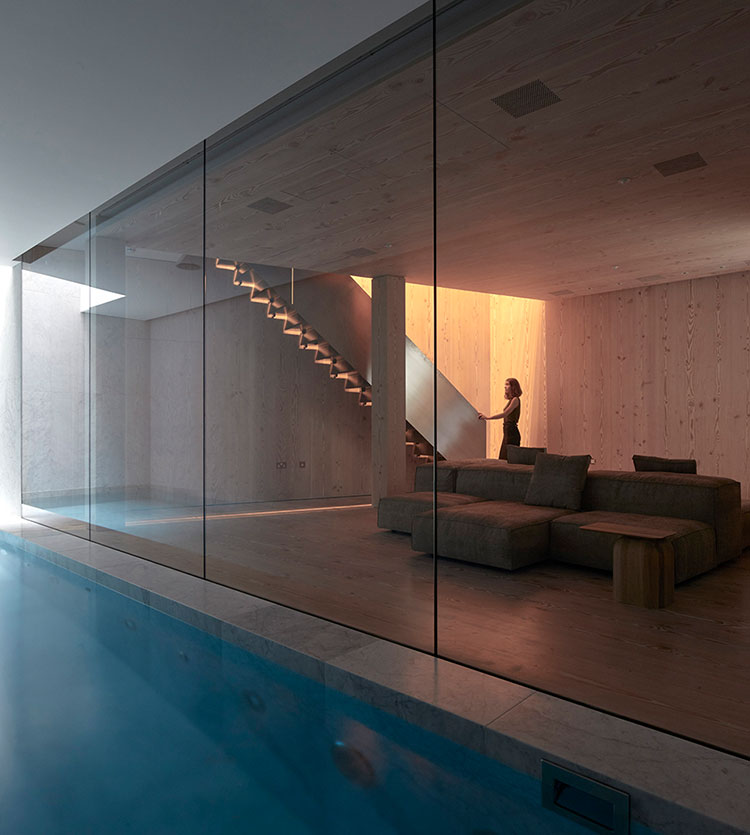 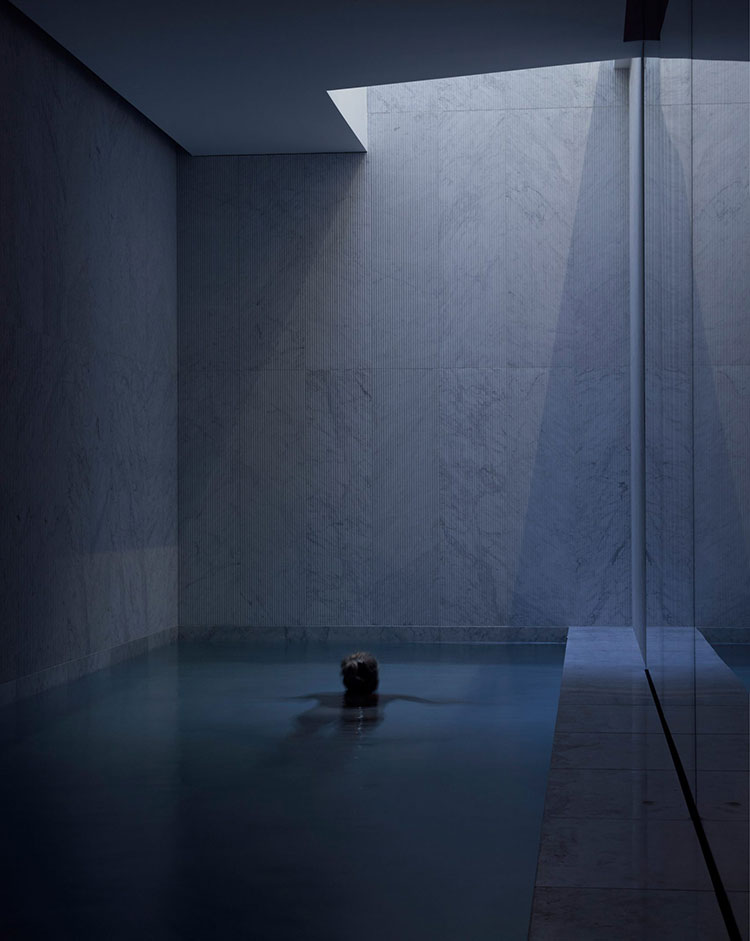 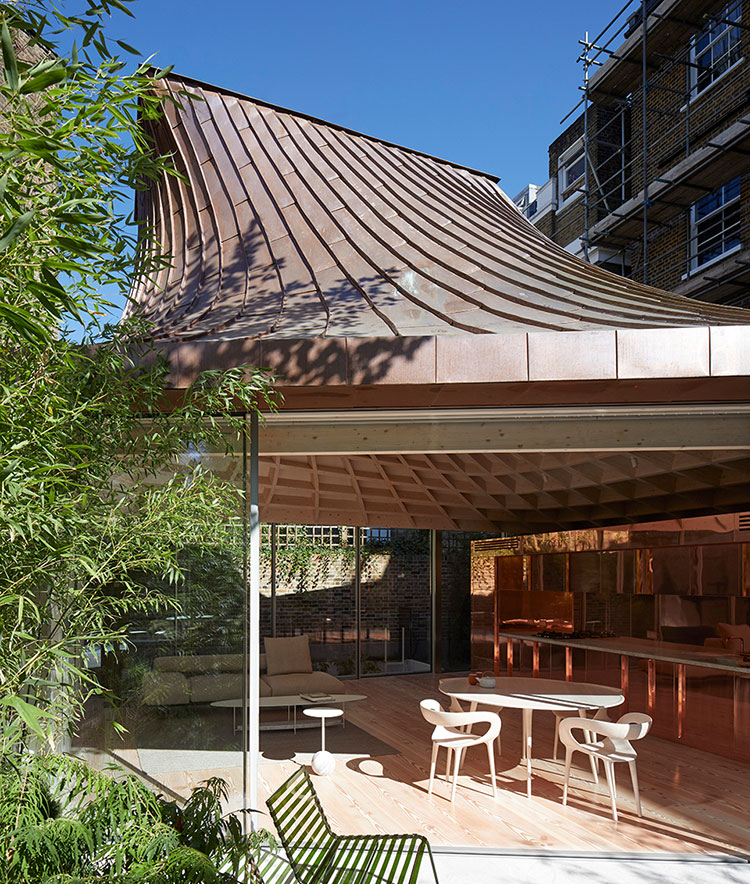 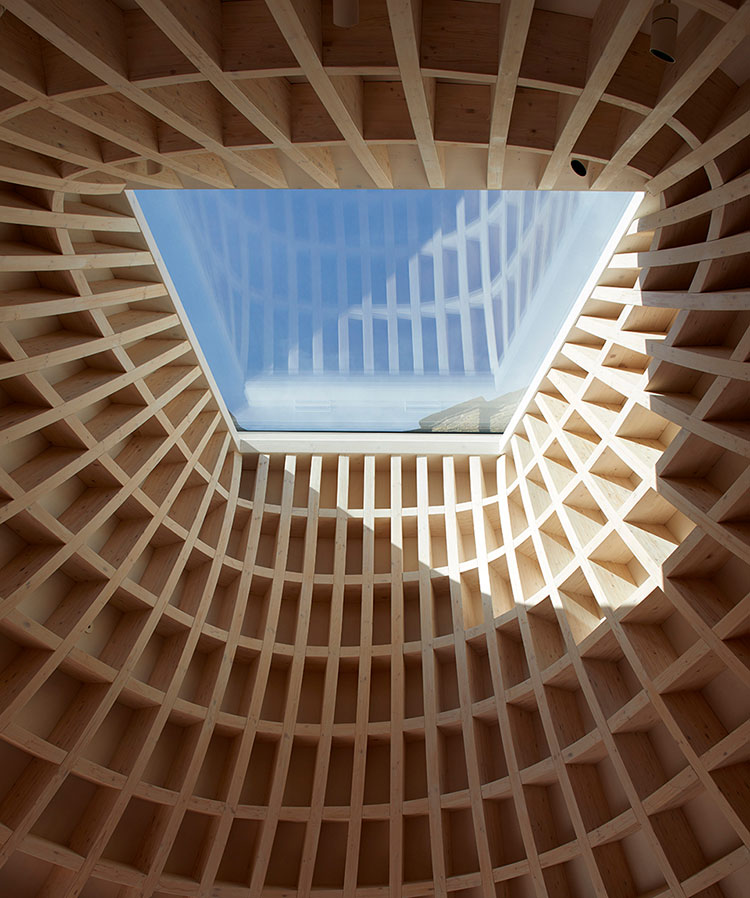 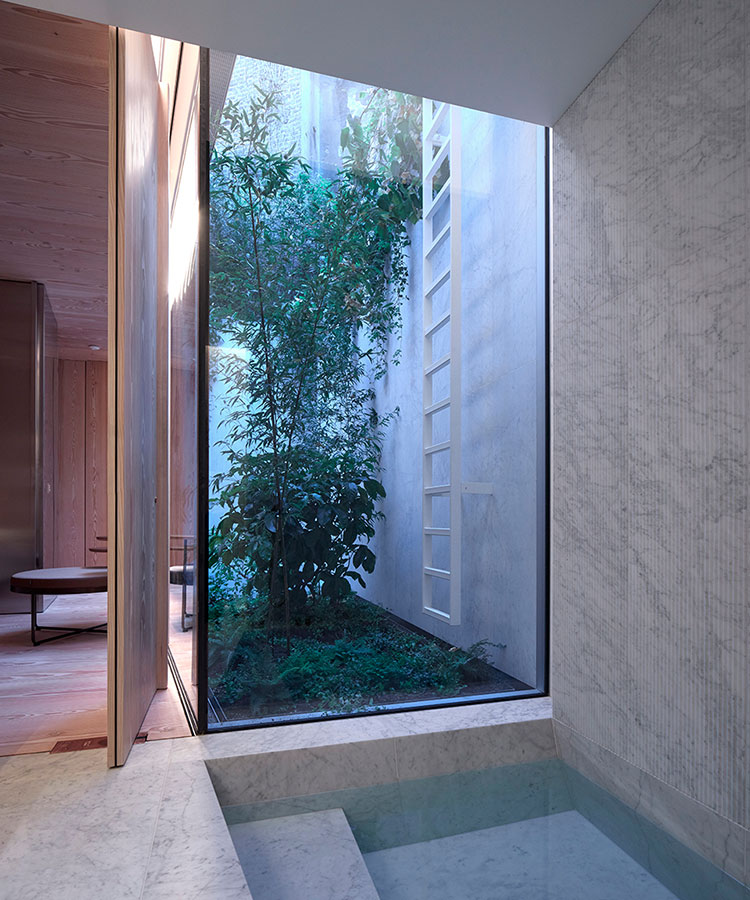 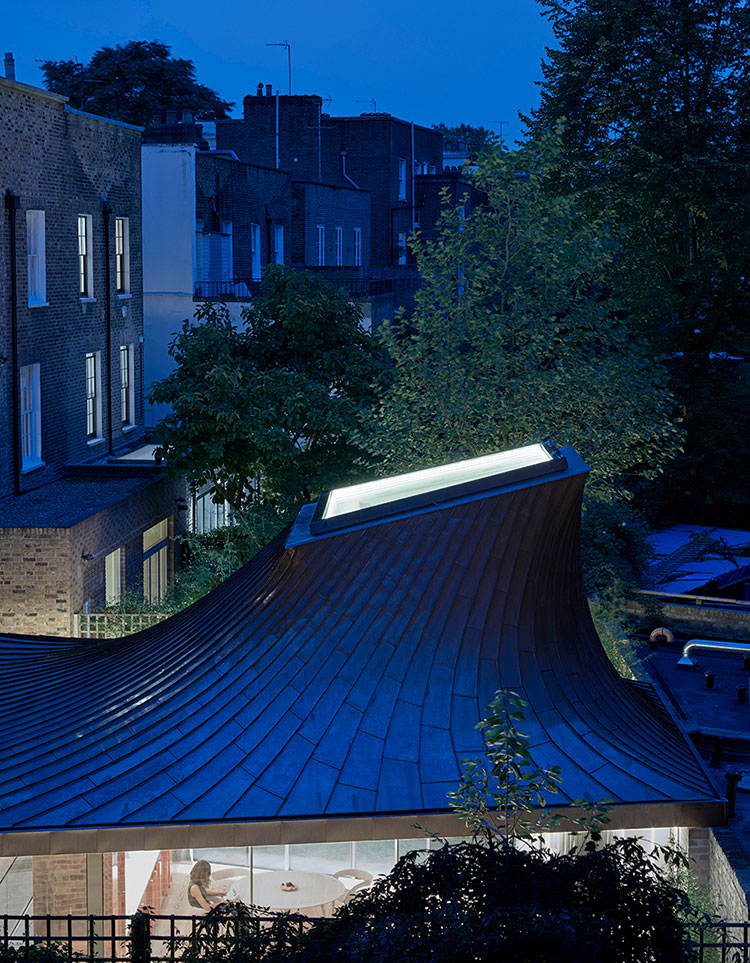