Designed by Beijing-based OPEN Architecture on a quiet beach along the coast of northern China’s Bohai Bay, the UCCA Dune Art Museum is carved into the sand, where it gently disappears. Countless years of wind have pushed the beach’s sand into a dune along the shore several meters high, stabilized by low-rising shrubs and other ground covers. Inspired by children’s tireless digging in the sand, the museum lies beneath this dune. 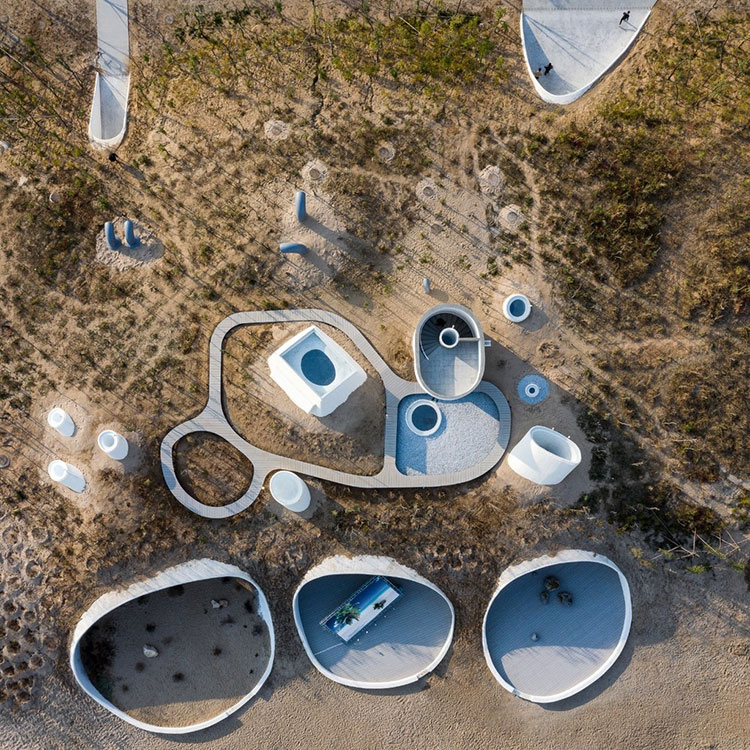 “Digging” creates a series of interconnected, organically shaped spaces which, enveloped by sand, resemble caves—the primeval home of man, whose walls were once a canvas for some of humanity’s earliest works of art. Hidden between the sea and the sand, the design of the Dune Art Museum is simple, pure, and touching—a return to primal and timeless forms of space.

The decision to create the art museum underneath the dunes surrounding it was born out of both the architects’ deep reverence for nature and their desire to protect the vulnerable dune ecosystem, formed by natural forces over thousands of years. Because of the museum, these sand dunes will be preserved instead of leveled to make space for ocean-view real estate developments, as has happened to many other dunes along the shore. 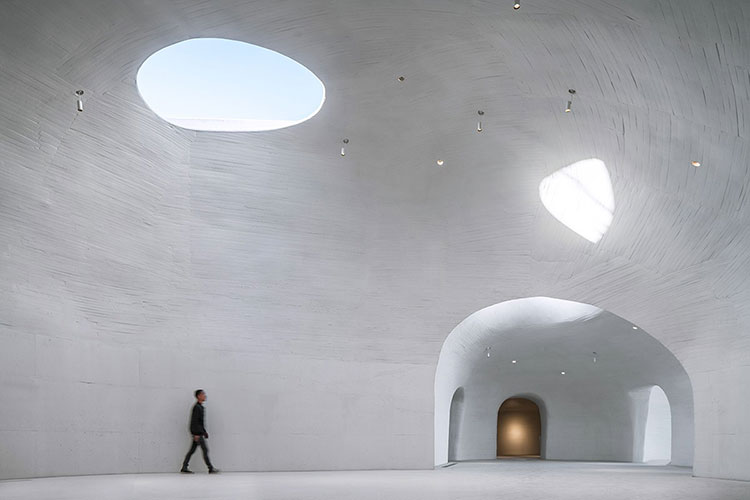 A series of cell-like contiguous spaces accommodate the Dune Art Museum’s rich and varied programs, which include differently-sized galleries and a café. After passing through a long, dark tunnel and a small reception area, the space suddenly opens up as visitors enter the largest multifunctional gallery. There, a beam of daylight from the skylight above silently yet powerfully fills the space. 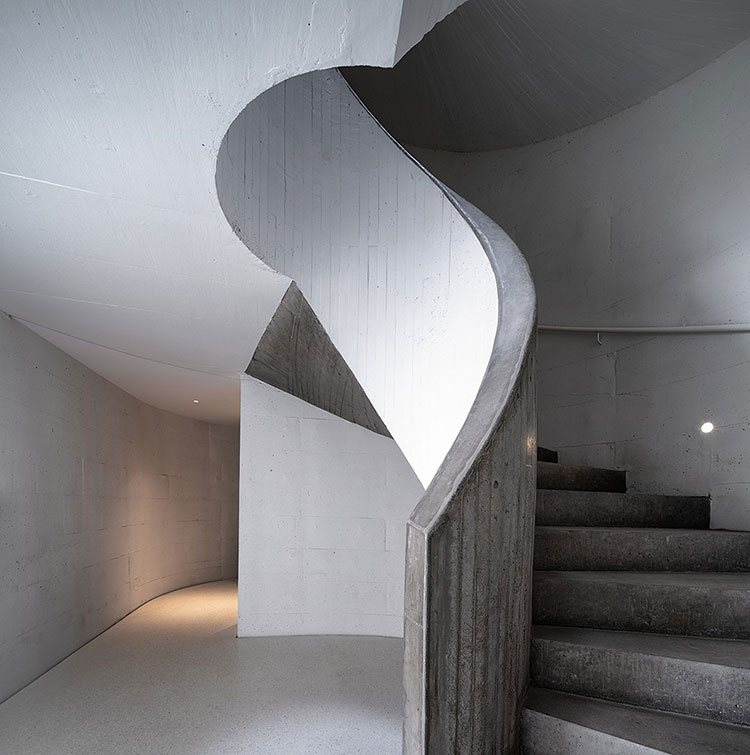 Looking through different openings framed by the building, museum-goers can observe the ever-changing expressions of the sky and sea throughout the day. A spiral staircase leads to a lookout on top of the sand dune, guiding curious audiences from the dark recesses of the museum’s cave-like galleries to the vast openness above.

Hidden between the sea and the sand, the museum emerges as a hidden shelter, intimate to the body and soul—a place to thoughtfully contemplate both nature and art.

The complex three-dimensional geometry of the Dune Art Museum’s concrete shell was shaped by hand by local workers in Qinhuangdao (some of whom were former shipbuilders), using formwork made from small linear strips of wood and other materials. The architect deliberately retained the irregular and imperfect texture left by the formwork, allowing traces of the building’s manual construction to be felt and seen. In addition, the building’s doors and windows, reception desk, bar counter, and bathroom sinks are all custom-designed and made by hand. The eight tables in the café are also designed by the architect, each with a distinct shape matching that of the floor plans of the eight main gallery spaces. 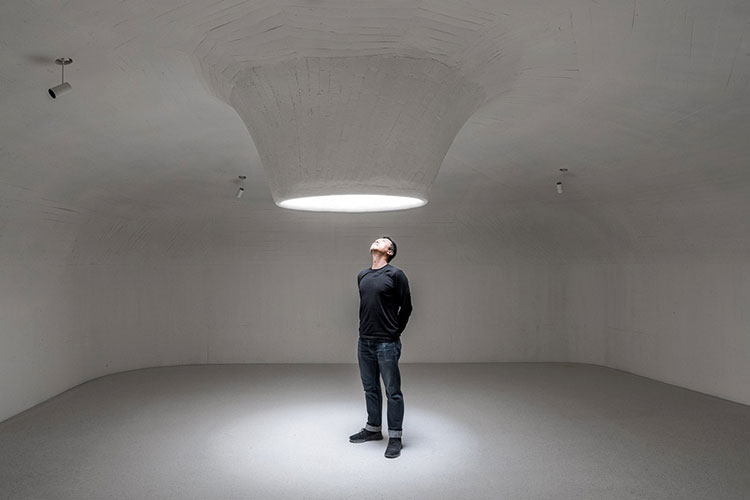 The building’s many skylights, each with a different orientation and size, provide natural lighting for the museum’s spaces at all times of the year; its sand-covered roof greatly reduces the building’s summer heat load; and a low-energy, zero-emission ground source heat pump system replaces traditional air conditioning.

In the near future, a long walkway will be built opposite the Dune Art Museum, extending into the ocean. At low tide, when the pathway is accessible, visitors will be able to walk to the Sea Art Museum, which will rise out of the sea like a solitary rock. Together, these two museums will form a “Dialogue by the Sea”. 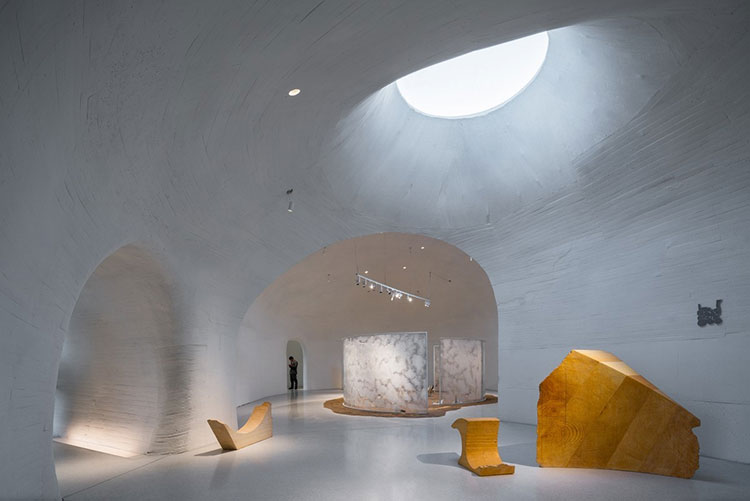 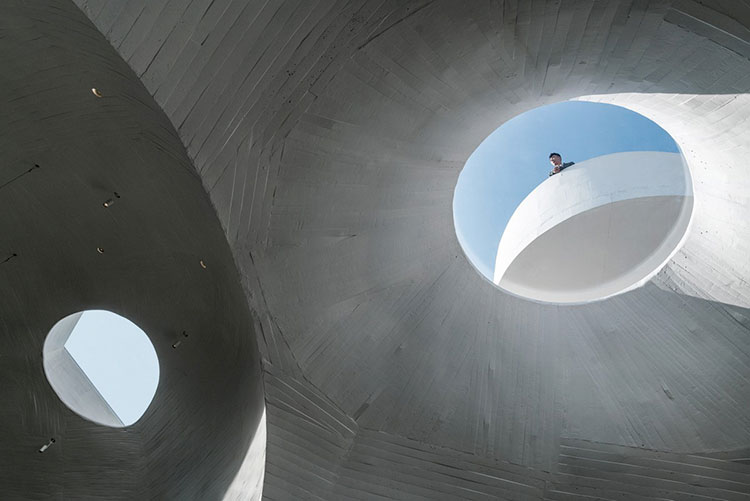 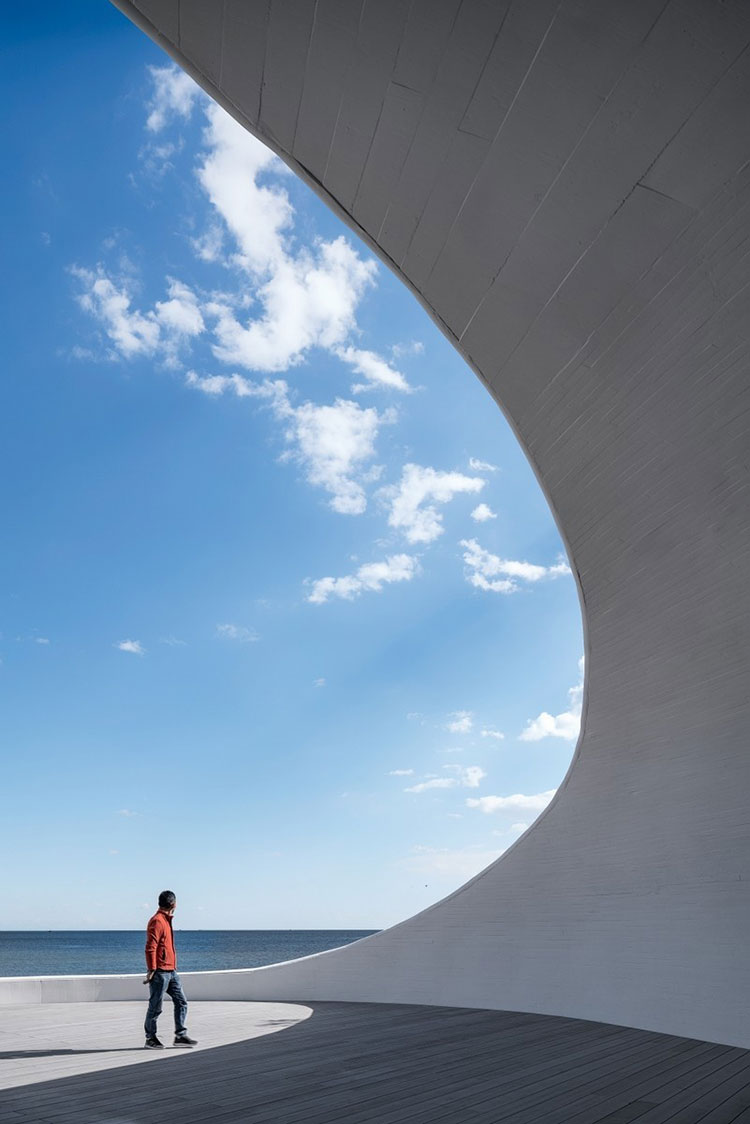 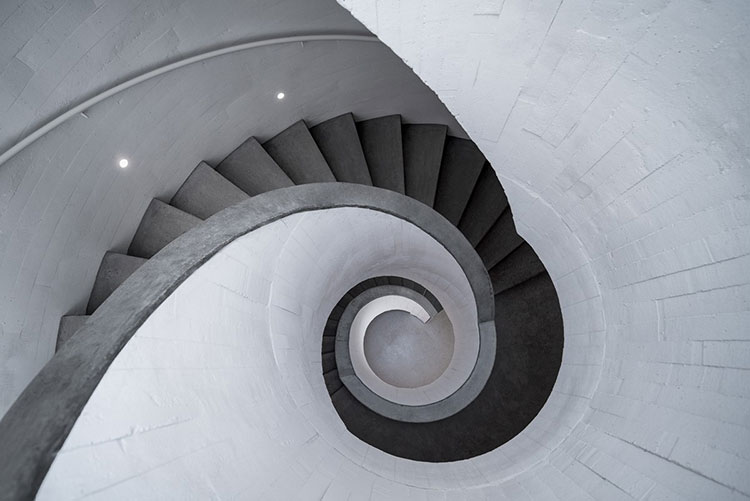 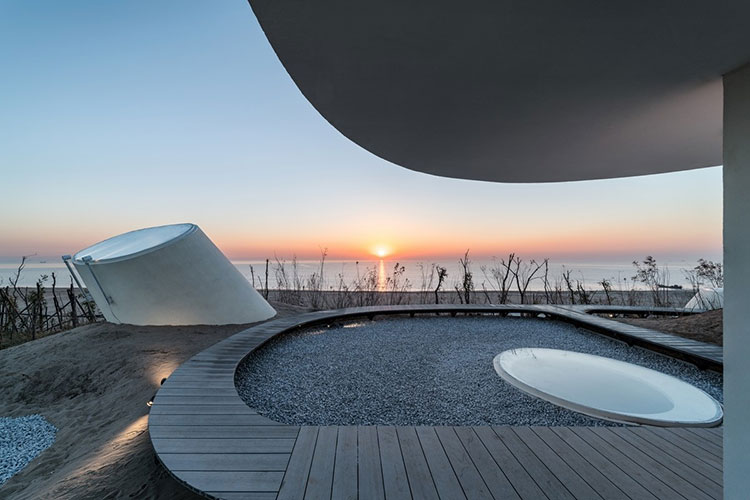 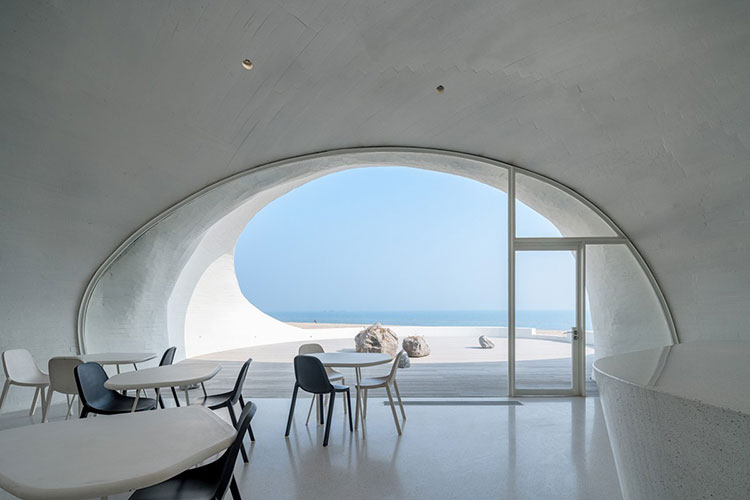 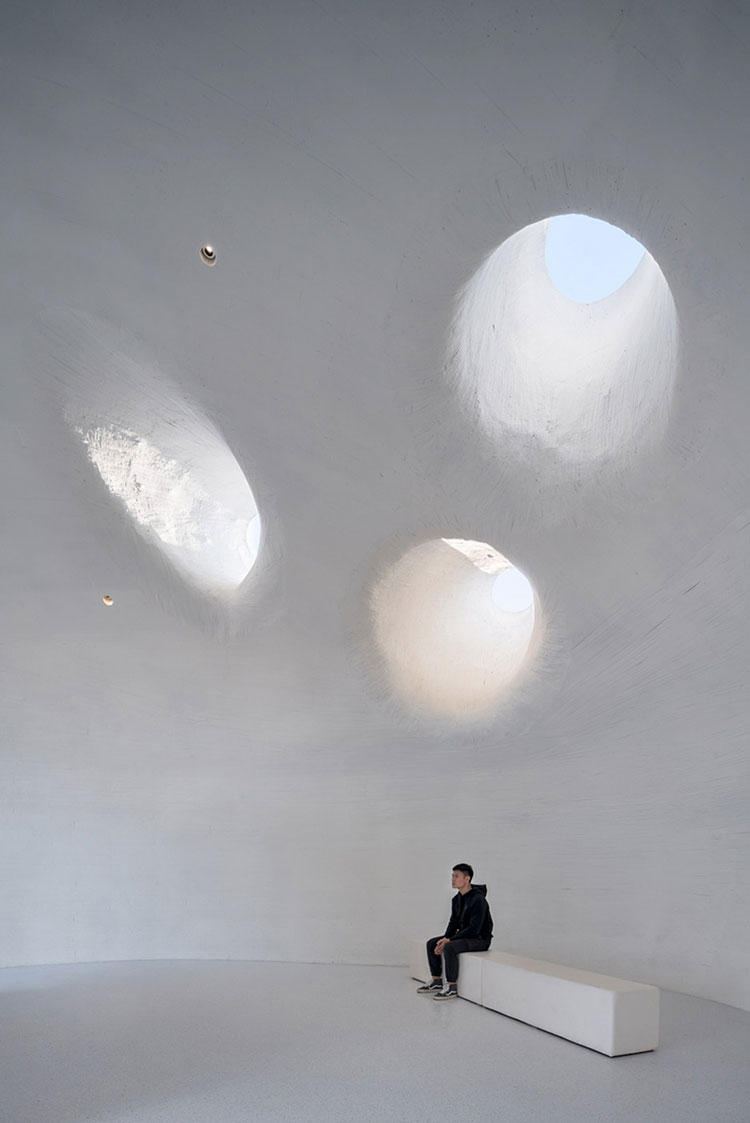 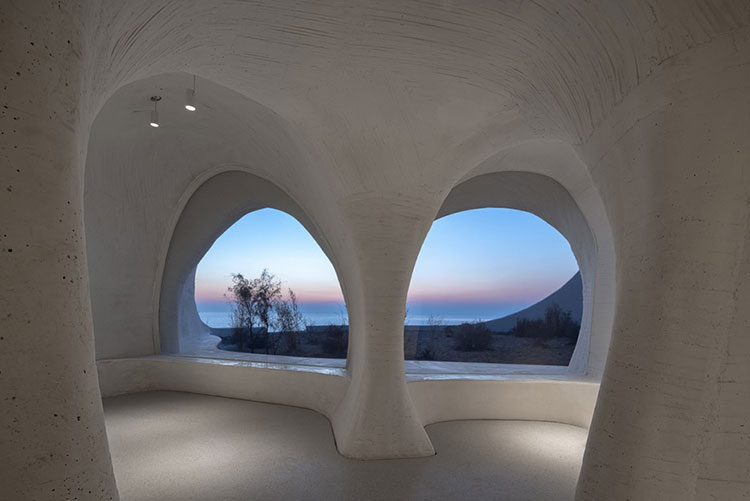 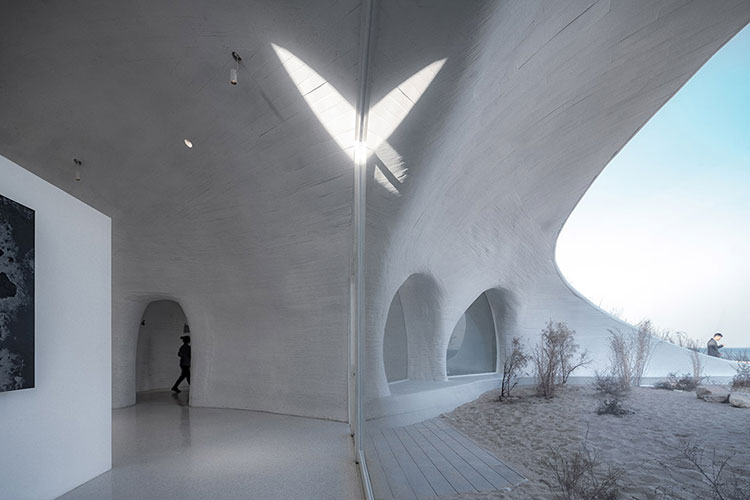 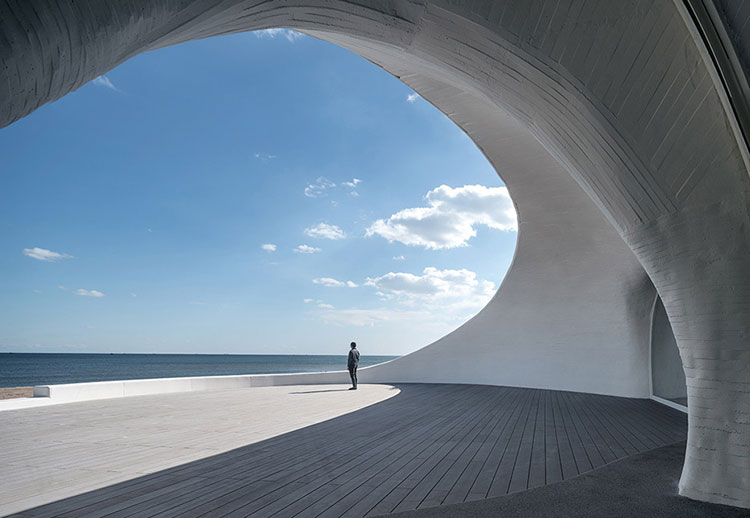 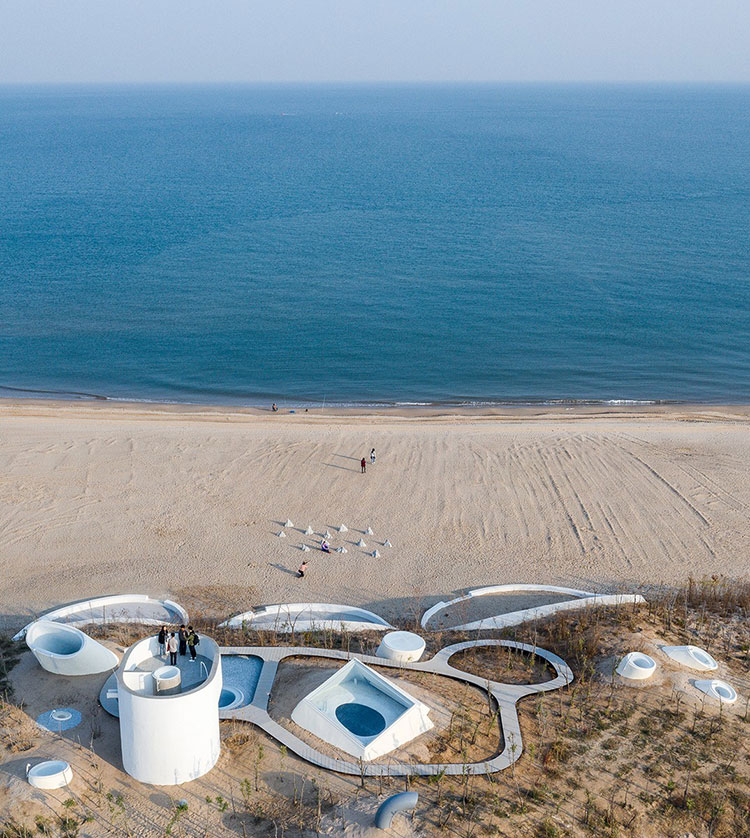