Architecture practice Craftworks has transformed a formerly derelict chapel into a new guest house for a family in Camberwell, London. Described as “unbeatable”, The Chapel is this year’s winner of the Don’t Move, Improve! awards, which are organized by New London Architecture (NLA). 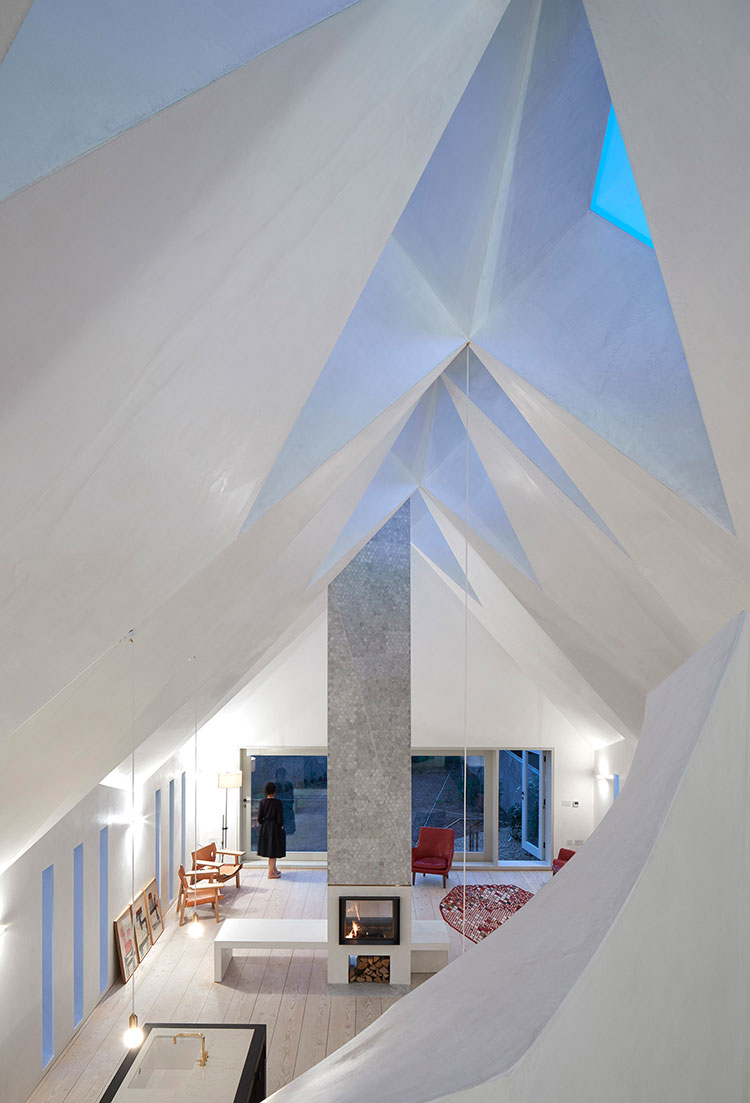 The challenge of turning the chapel into a contemporary home lay in the very restrictive planning process and the need to carefully negotiate privacy and overlook of the neighboring properties. Given the planning restrictions for the conservation area, the programme for a family house needed to surgically dovetail into the existing shell, whilst allowing creative freedom within an internal transfiguration. This primarily involved the construction of a lower ground level for the sleeping quarters, a large ground floor living space with vaulted ceiling, and a mezzanine level inserted as a space for privacy and retreat within the volume of the living space.

Though it was never actually consecrated as a chapel, the unhallowed status became the protagonist for architectural intervention. The vocabulary of structural components; axis, narthex, fan vault, nave, and crossing were recast with similar dwelling archetypes: medieval hall houses, Victorian attic spaces, and long galleries to bring about a unique dwelling type. Similarly, interior elements such as pulpit, confession, altar, pipe organ, and matroneum were interwoven with everyday forms of domestic furniture and situated around the activities of eating, sleeping, cooking, relaxing, and study. Vertically, the spaces divide between day and night, heaven and earth. 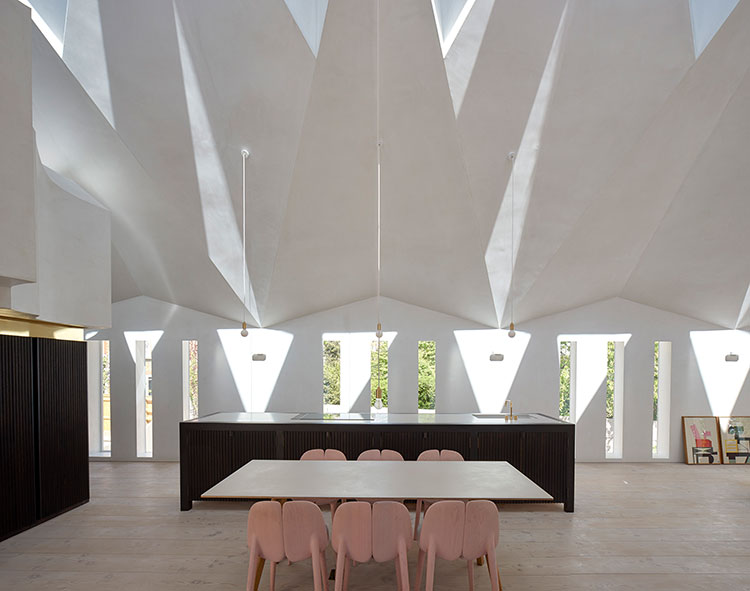 Throughout the ambulatory movement of Chapel, the in-between spaces create opportunities in which to foster and play out the every-day of domestic life without constraint nor pre-condition. Entrance steps create a place to momentarily rest in the sun whilst the internal staircase is wide enough to contemplate a book. A window slot frames nature’s cherry blossom, the ingle-nook invites intimate conversation, and a private study is placed within the cloud of the roof to invoke inward concentration. 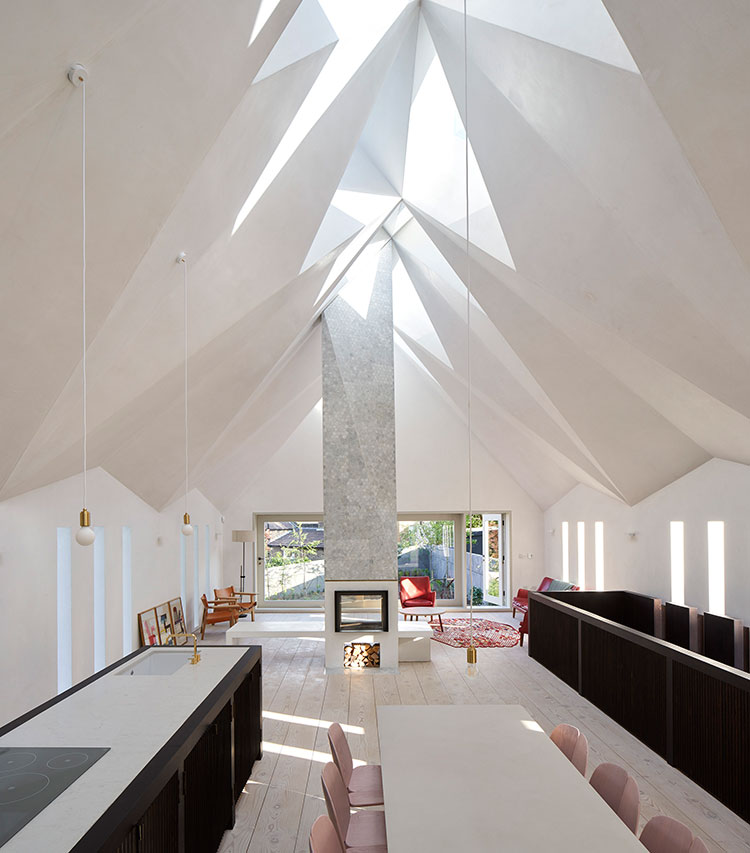 Materials are ascetic and contradictory in their quality so as to enrich and resonate with the emotional atmosphere. The external brickwork is constructed of bricks reclaimed from the existing chapel and the roof slate is reclaimed from locally demolished buildings.

The inner volume is a pearly shell of waxed lime plaster and the floor is laid with extra wide lengths of bleached douglas fir, contrasting with the austere dark tones of the fumed oak joinery. All work was carried out by our in-house team of local craftsmen and London based sub-contractors.

A total of 500sqm of landscaped garden surrounds the building creating a hidden sanctuary away from the city. The landscape design seeks to continue the undulating faceted nature of the internal vaulted ceiling by crisscrossing rusty steel borders, bold and vibrant planting and perforated steel. 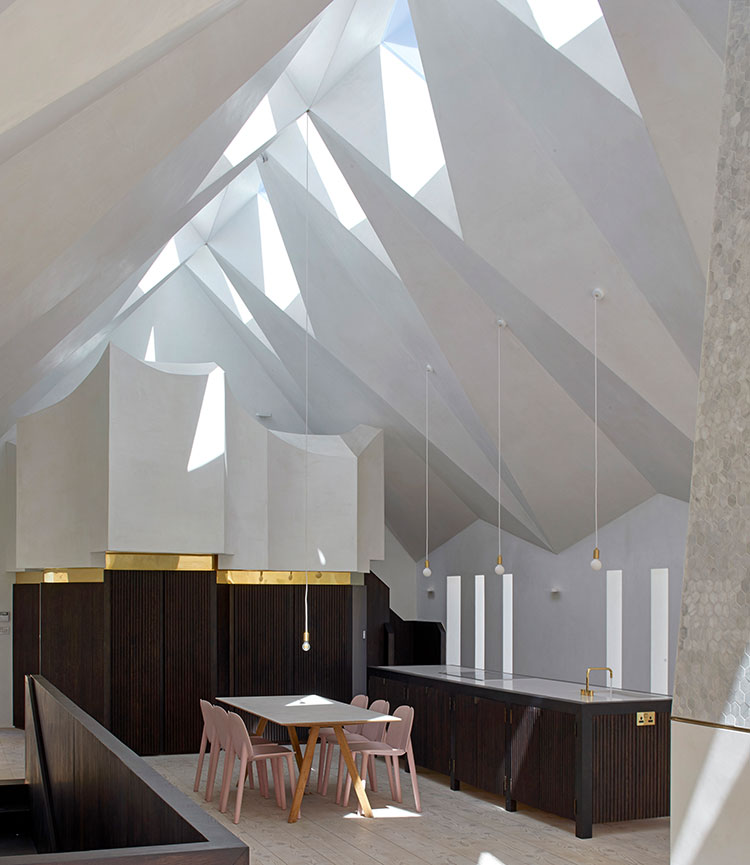 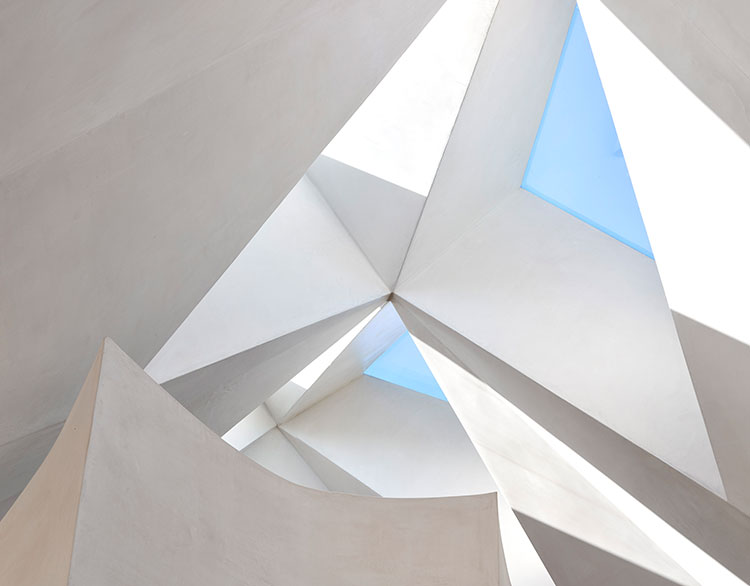 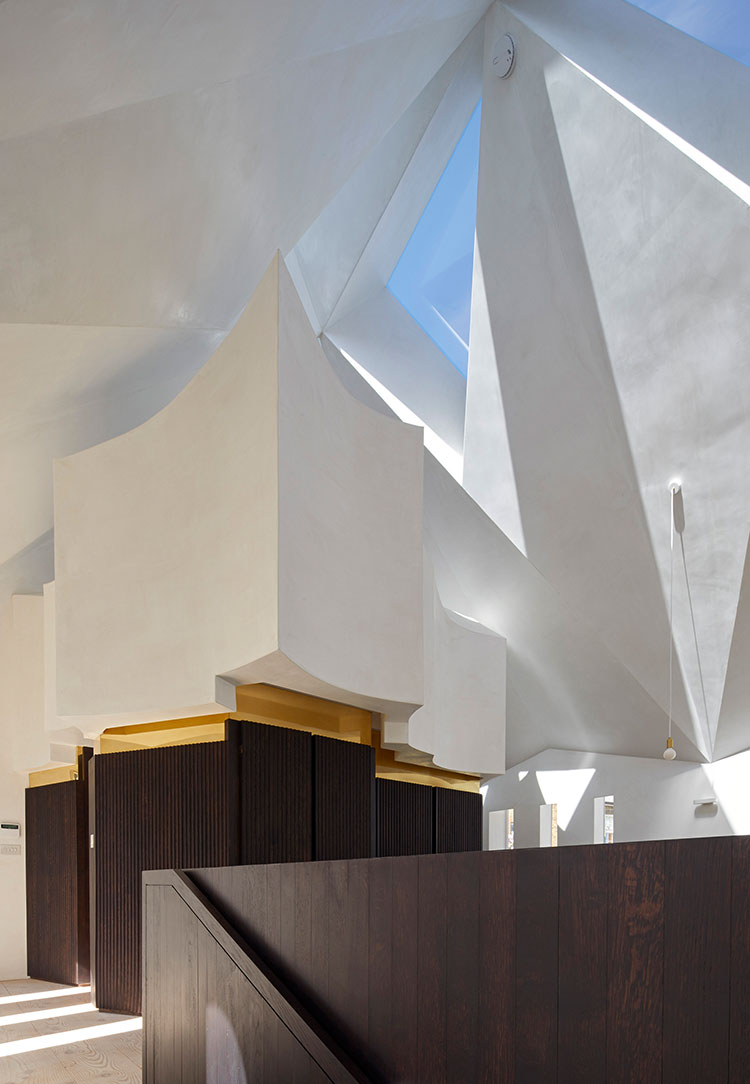 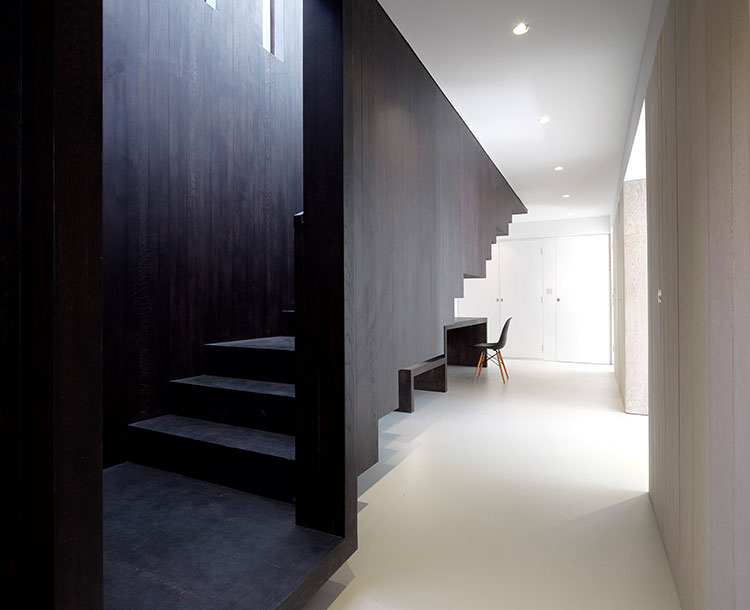 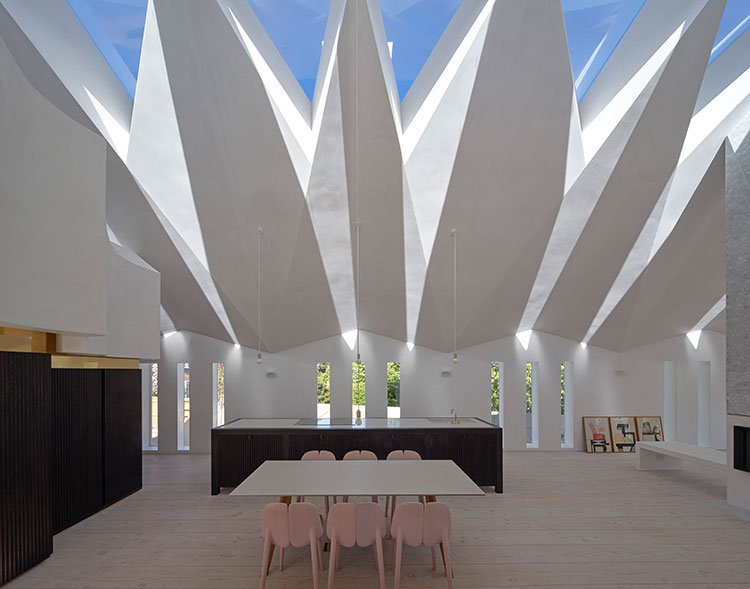 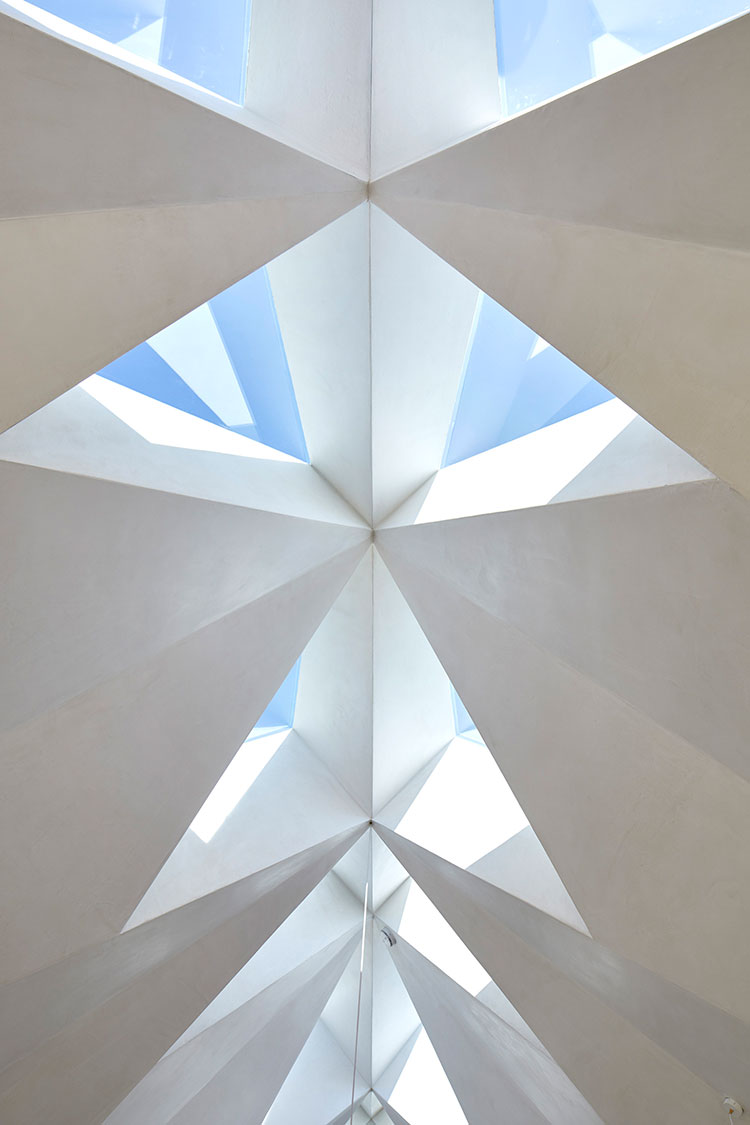 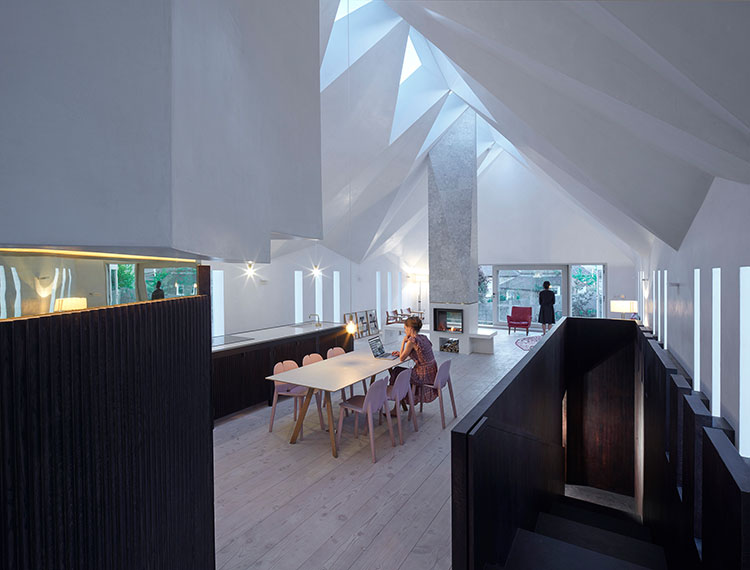