Modernism and the characteristics of the avant-garde of the early twentieth century are the basis that lies in the concept of the office interior for the information technology company Gismart. Dudes architect‘s team set itself the task of creating a comfortable working environment in “open space” conditions. For this purpose, the office was separated into two functional areas: office (working) and break area, all important factors of the operational environment were taken into account too, such as zoning, light and silence. 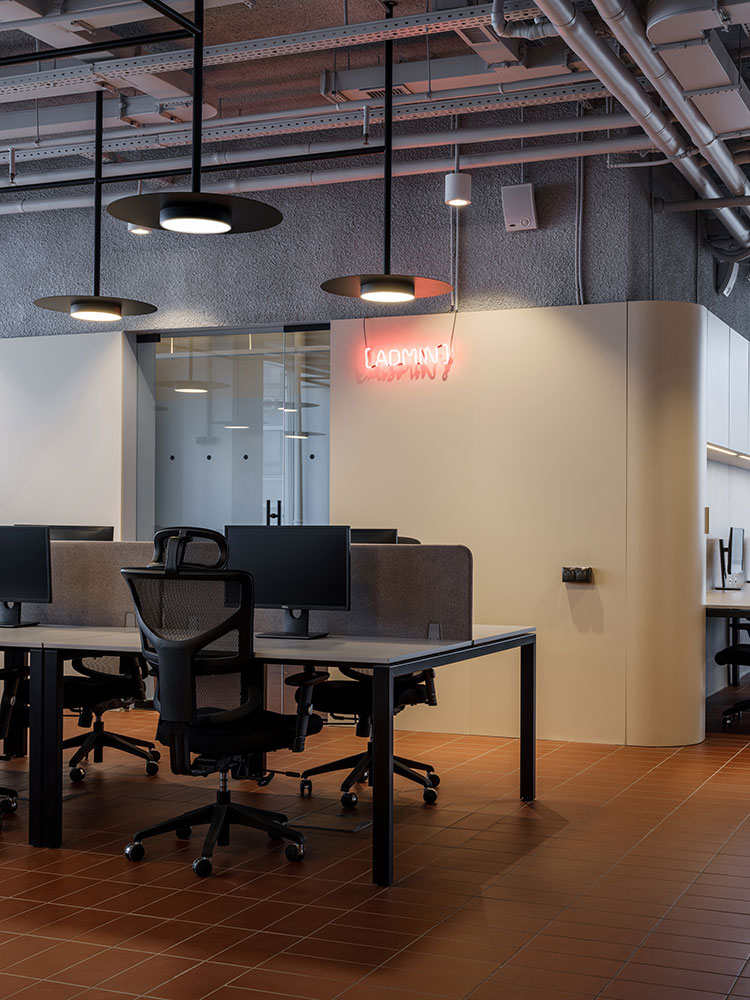 The core of the office is a green cupboard with rounded corners for storing clothes and other things. It brings all work areas together. There are shelves with soft pillows in the cupboard, where workers can retire or hold a short meeting without disturbing others. The continuation of the core are light graphic racks with green vegetation. These racks divide the common workspace into small command cells.

Small-format tiles of two colors are used to highlight different functional areas on the floor: brown tiles in the transit area and terracotta in the work area. The workplaces are highlighted by turning the tile 90 degrees. The transit zone is separated by “capsules” and an entrance branded brick partition with a fence made of polycarbonate of milk color.  You can negotiate or just relax in the “capsules” with soft sofas and blackout curtains. 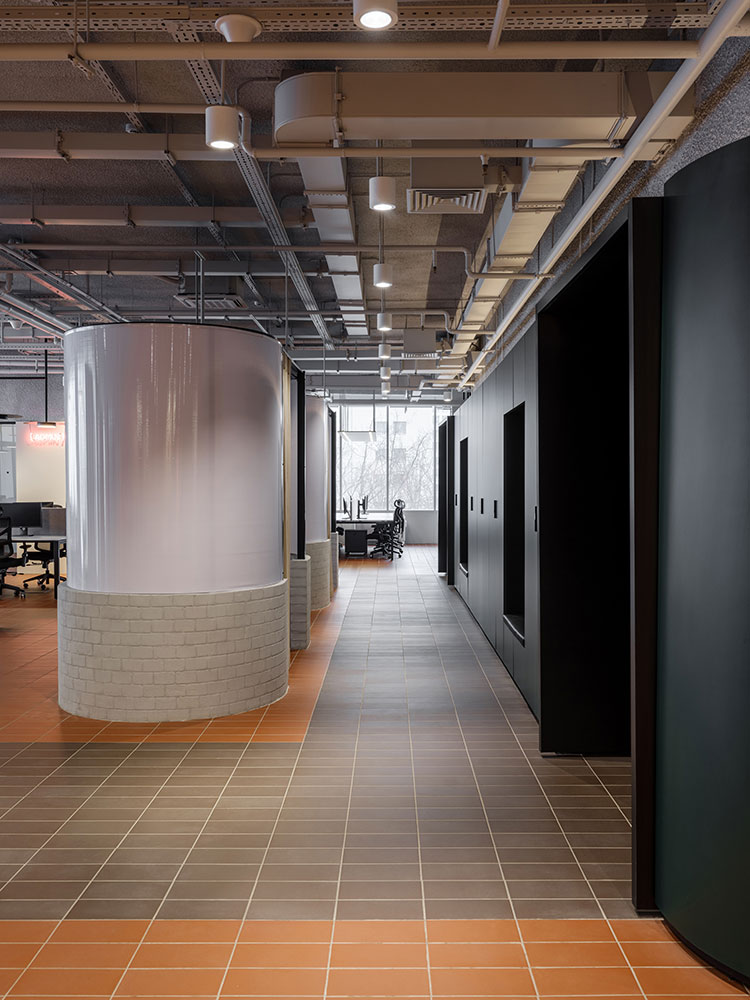 Zoning of the space and the selection of the working cell are also achieved by using metal ceiling frames with lamps. The screens above them reflect the light. They don’t let the light scatter across the ceiling. The method of using screens of particle boards for reflecting light is used throughout the office to illuminate workplaces and is a visual horizontal beating of a high room. A textured cement surface was made on the ceiling and walls to give a comfortable environment in the work areas. Its porous structure absorbs noise and creates the effect of a warm textile surface that you want to touch. There are three meeting rooms in the office. 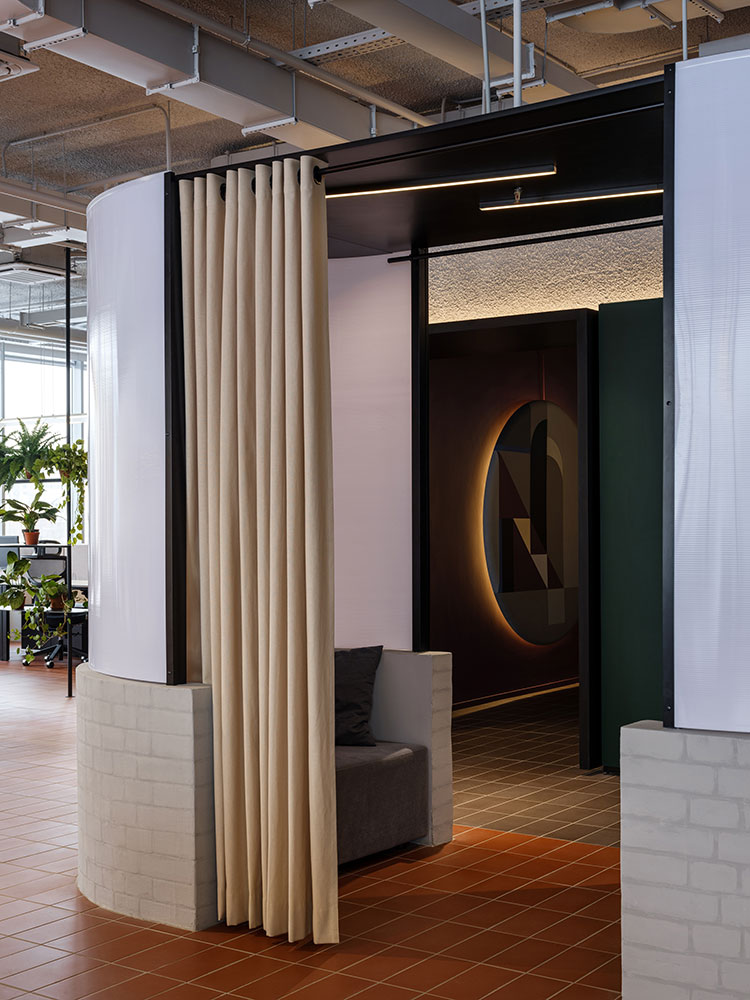 A number of items have been created in meeting rooms to absorb noise. Firstly, acoustic foam (textile) panels in form of negotiations tables are placed on the ceiling. Secondly, heavy textile curtains are hanging on stained-glass panels and windows. Thirdly, decorative walls made of profiled metal reflect and distribute sound due to its shape.

There is a telephone booth in the common core of the green cupboard. The booth is isolated from the general space by acoustic foam rubber. The burgundy color of foam rubber and neon lights create a mysterious atmosphere of film developing room inside the telephone booth.

A black ceiling without lighting, dark wall color and wall vertical lighting are used in the transit areas of the corridors. These techniques create the effect of a “tunnel” or “sleeve”. The tunnel connects the door portals of the work areas with the recreation zone and conversely. There are places to make phone calls in the corridors. These places are round soft panels with graphics (“architectural suprematism”), to which you can lean against and communicate in the dark atmosphere of the corridor-tunnel. 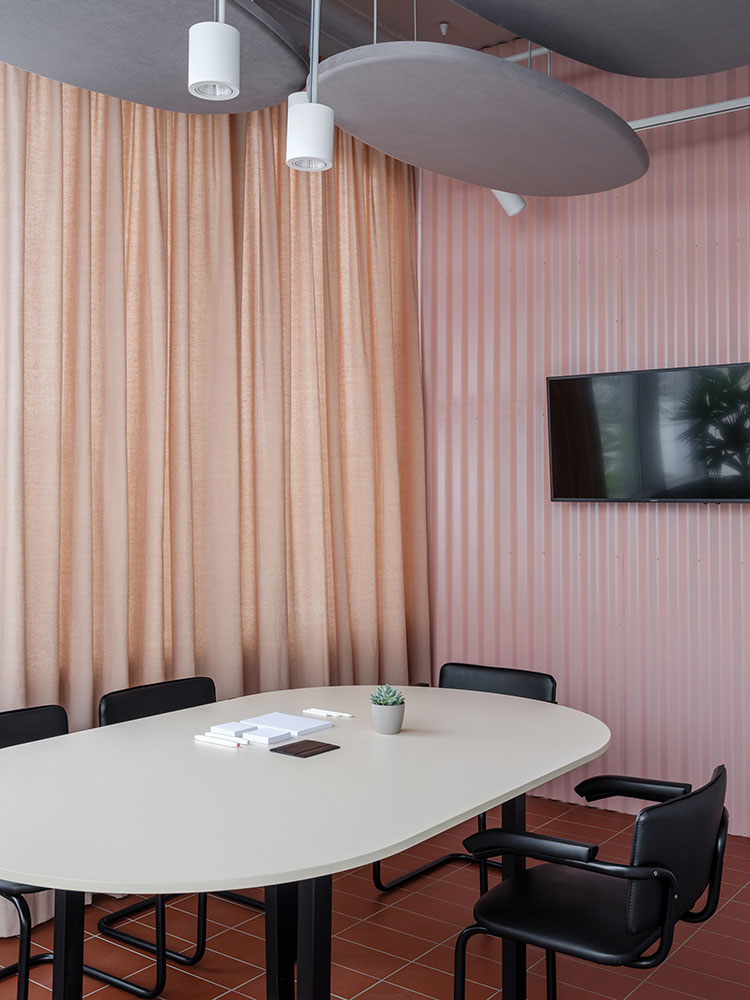 The break area is located in a separate room and is divided into several functional areas, but they are all united by a single concept – the “greenhouse”. Each office worker will find a secluded place where he can relax among the large green plants. This can be a kitchen with a movable dining table, a bar or a games area with soft poufs. You can retire to the round soft sofas and hold a short meeting or just have a quiet dinner. In the “workout” area you can actively spend your time and hang a little on the parallel bars. 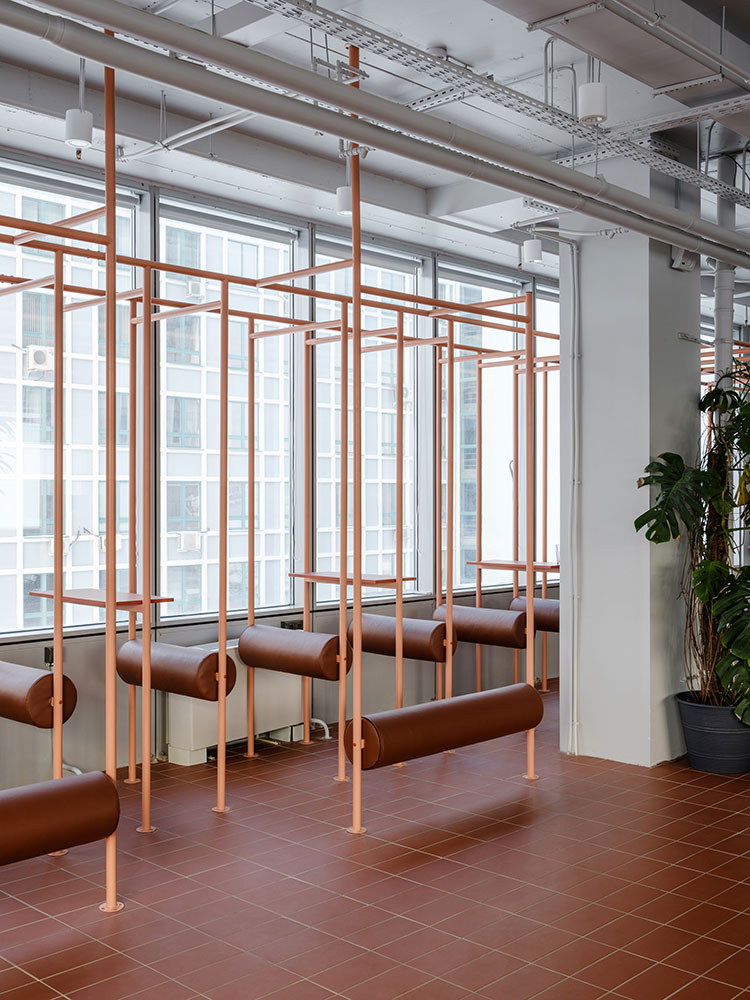 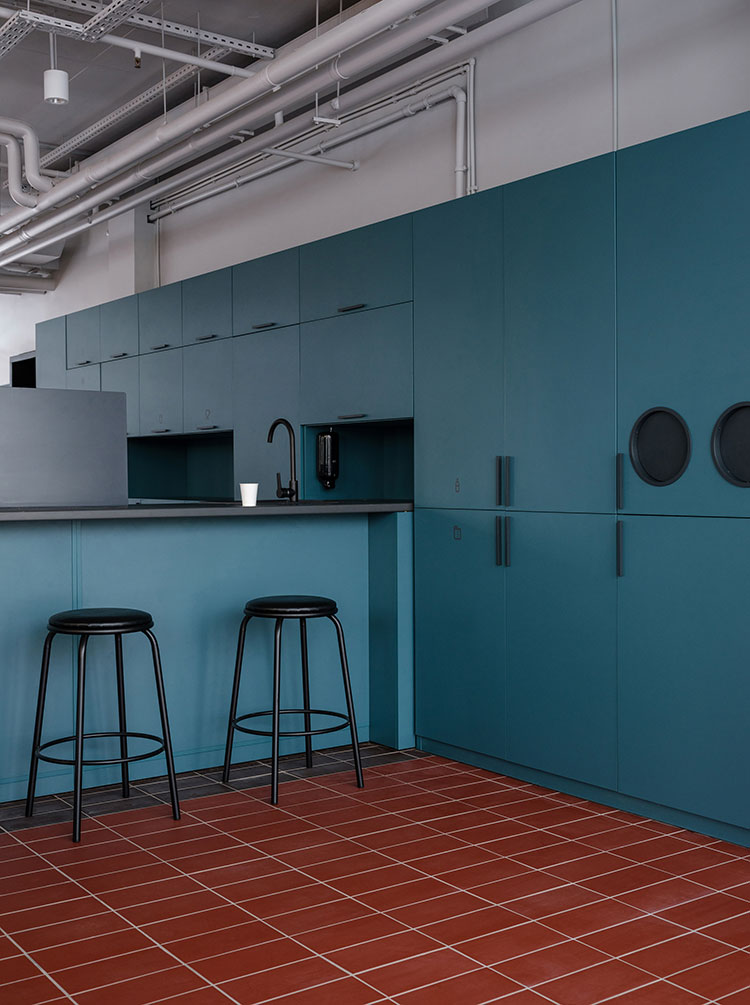 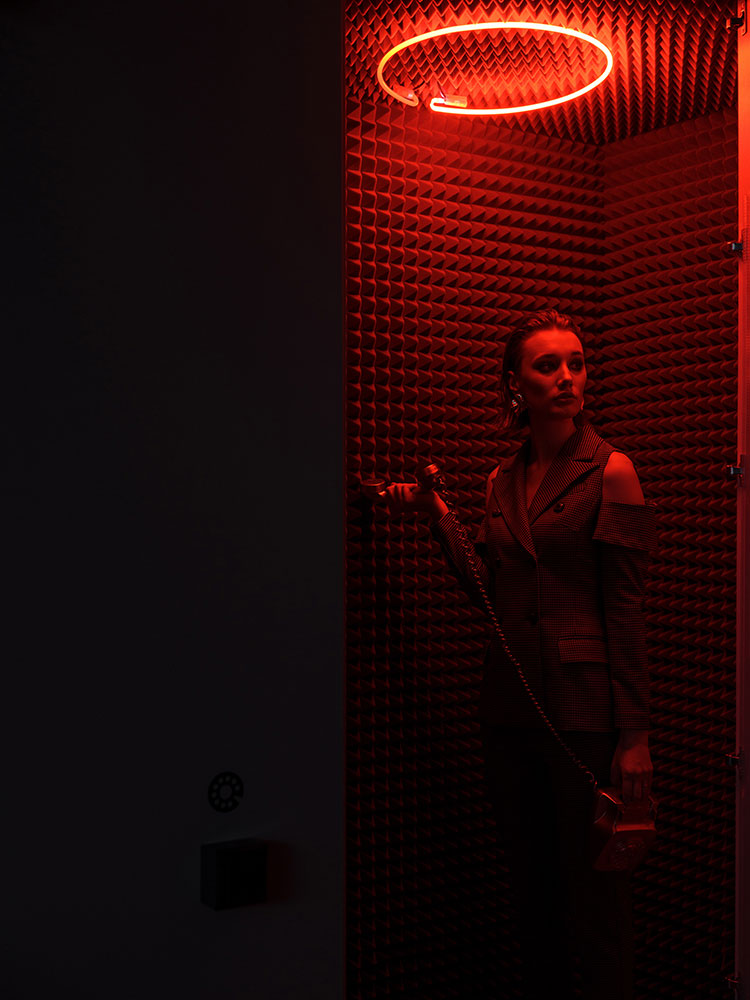 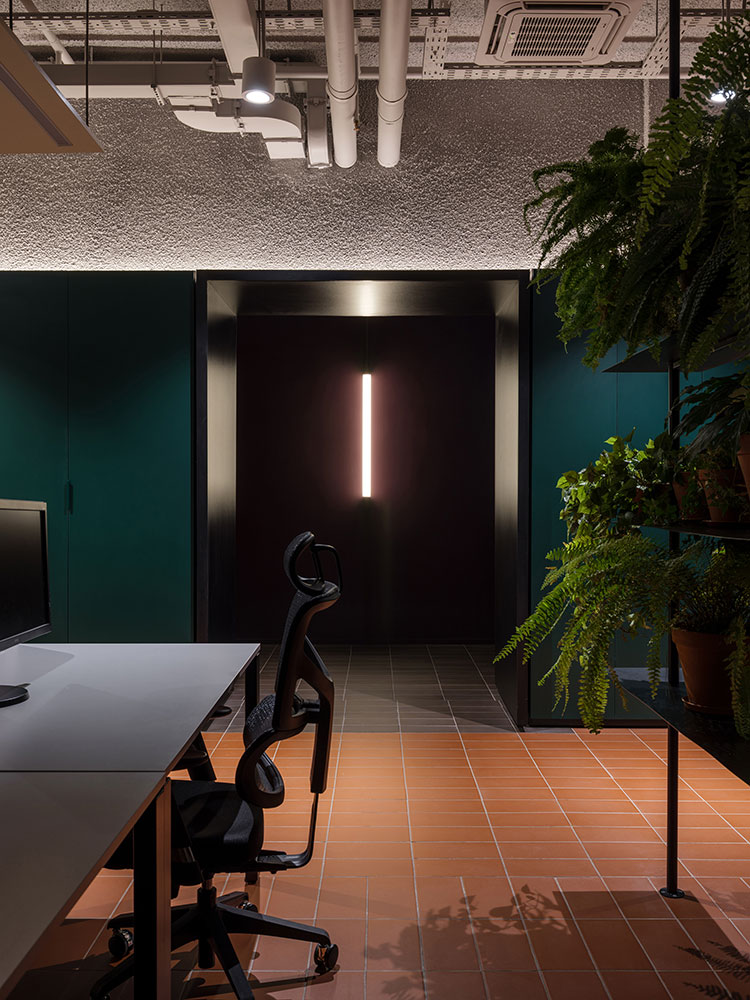 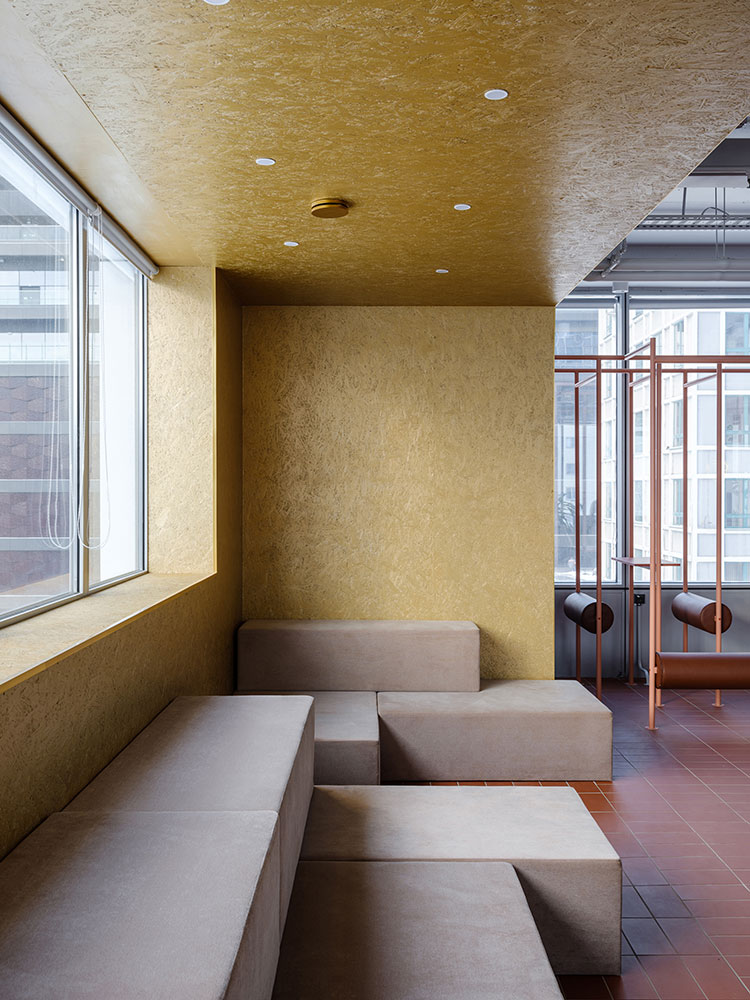 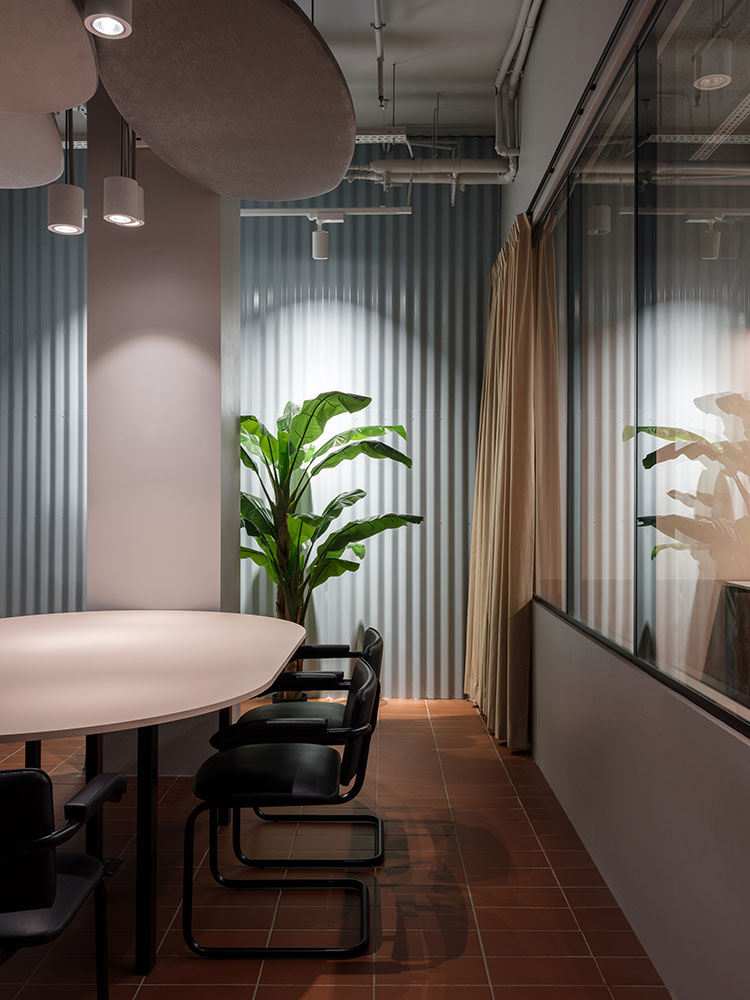