MVRDV and COBE have completed the Roskilde Festival Folk High School in the creative district Musicon in the city of Roskilde, Denmark. The new Folk High School was designed by the same partnership that created the nearby Ragnarock – Museum for pop, rock and youth culture. The opening of Roskilde Festival Folk High School adds a new chapter to the history of Danish education as the first new-build general folk high school in Denmark for 50 years. The school is situated in Hall 10, a former production hall for the Danish concrete manufacturer Unicon. The new 5.578 m2 facility offers students and teachers a setting for learning and creative projects in a folk high school based on the same ideals as the annual music festival Roskilde Festival, which is based on voluntary engagement, a humanitarian focus and creativity. 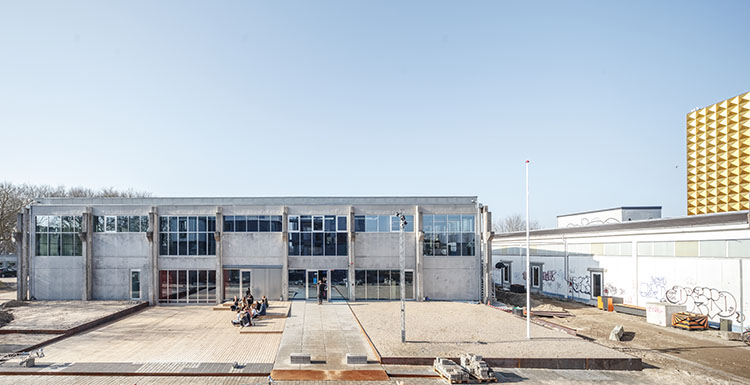 The festival is organized by the Roskilde Festival Association and is created by 30,000 volunteers. All profits from the festival are donated to humanitarian, non-profit and cultural work for the benefit of especially children and young people. In 2019 the music festival had over 130,000 participants and volunteers, which makes Roskilde Festival Denmark’s fourth largest ’city’ measured in population.

Based on the ideas of the enlightenment during the early 1800s, the Danish folk high school movement was conceived by the Danish writer and teacher N. F. S. Grundtvig (1783–1872). The school has no fixed curriculum and no exams, and both students and teachers live at the school during a course. 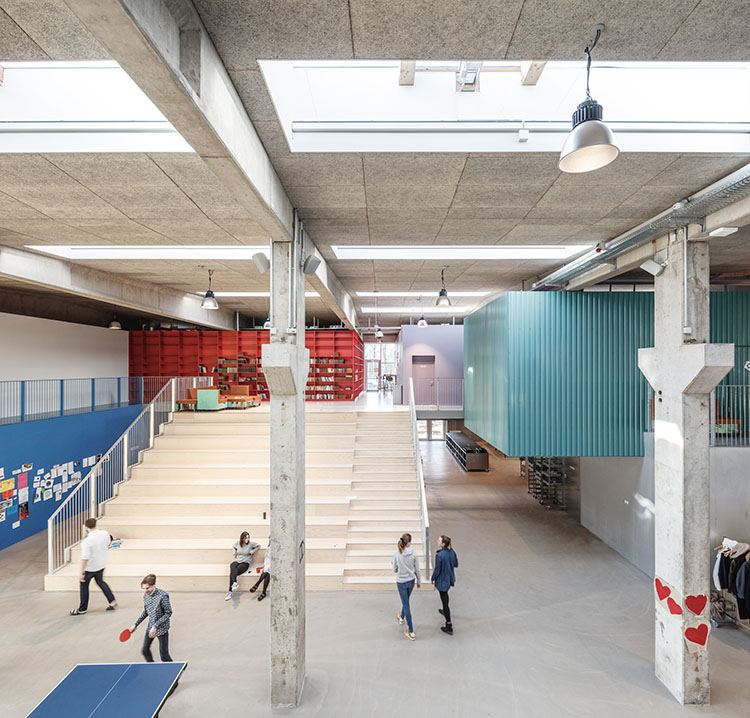 In this project COBE and MVRDV renovated and opened the former factory hall up by adding large windows while preserving the existing concrete girders and pillars in their raw state as remnants of the former production hall, Hall 10. Throughout the building in its current state, one senses a clear contrast between new and old. The hall, which was originally a single open space, now houses 16 large boxes in different colors and materials inspired by the festival’s colorful universe. The boxes contain a variety of functions, such as workshops for the school’s artistic courses, stages, music studios, dance hall, classrooms, staff room and a lecture hall with a capacity of 150 people. 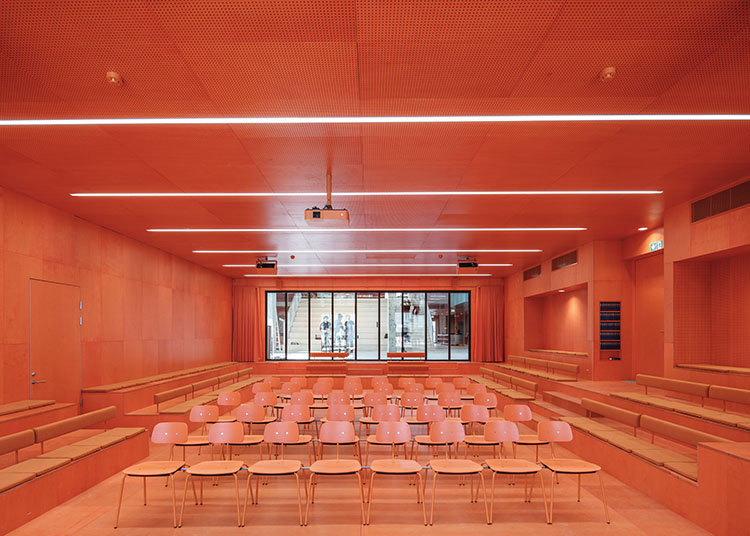 Each box is designed as a distinct space that provides an optimal setting for the students to engage in different subjects. All the boxes address the large common room in the middle of the old production hall, which has a ceiling height of eight meters. This area also contains the school’s communal facilities, such as the dining hall and assembly hall. The boxes are stacked two high in a staggered formation that gives rise to interesting and intimate spaces where the school’s community can develop and thrive in the ‘space in between’.

“For me as a former folk high school student it was a very special task to transform a former concrete factory into a folk high school with the purpose of shaping future generations of students,” says Dan Stubbergaard, architect and founder of COBE. “By opening the building up and adding new boxes inside the old structure we revitalize the building. A defunct industrial building has become a bustling hub for creativity and community.”

”Our design, just like the school itself, was inspired by the spirit of the Roskilde Festival. It is all about music, art, activism – but most of all, freedom. The festival combines ‘having a good time’ with innovation in an informal way, giving a special vibe that we wanted to capture in the design of the interior of the school,” says Jacob van Rijs, partner and founder of MVRDV. 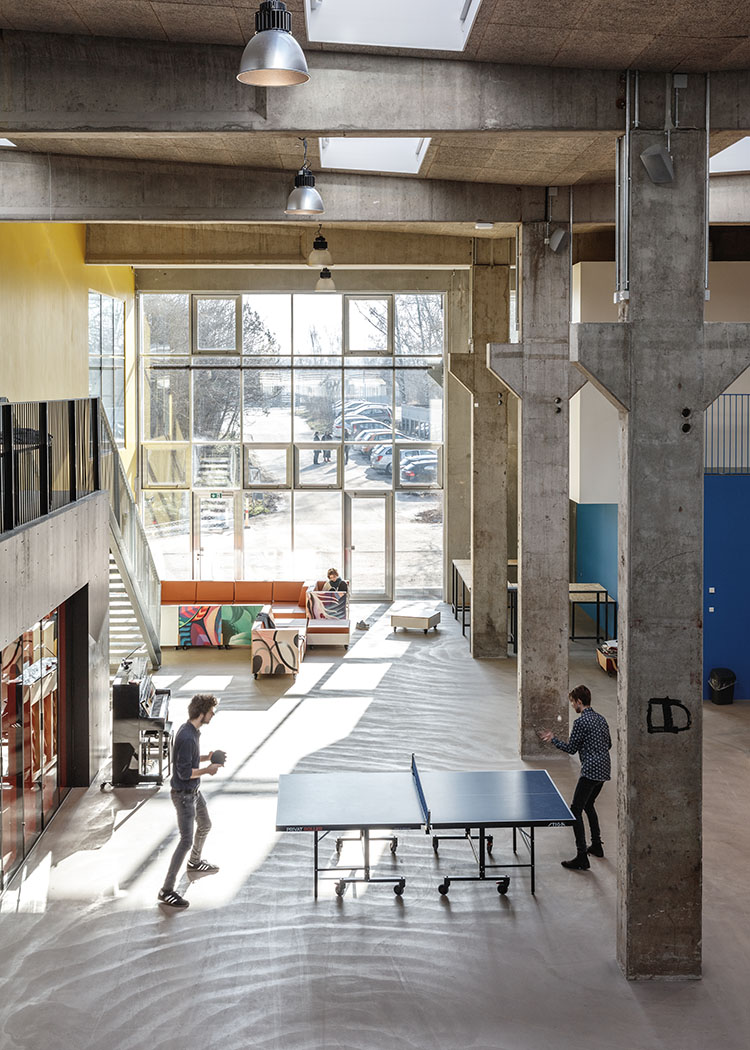 Roskilde Festival Folk High School is an important part of the development of Musicon, which is designed to be a vibrant and creative district. In addition to the folk high school the project also includes dwellings for students and teachers. The student dwellings are situated in front of the folk high school in two separate buildings. They consist of a number of stacked modules with sinusoidal and trapezoidal metal cladding that has clear references to the area’s history as an industrial production area. Each student block is four stories high and tied together by an exterior system of gangways. 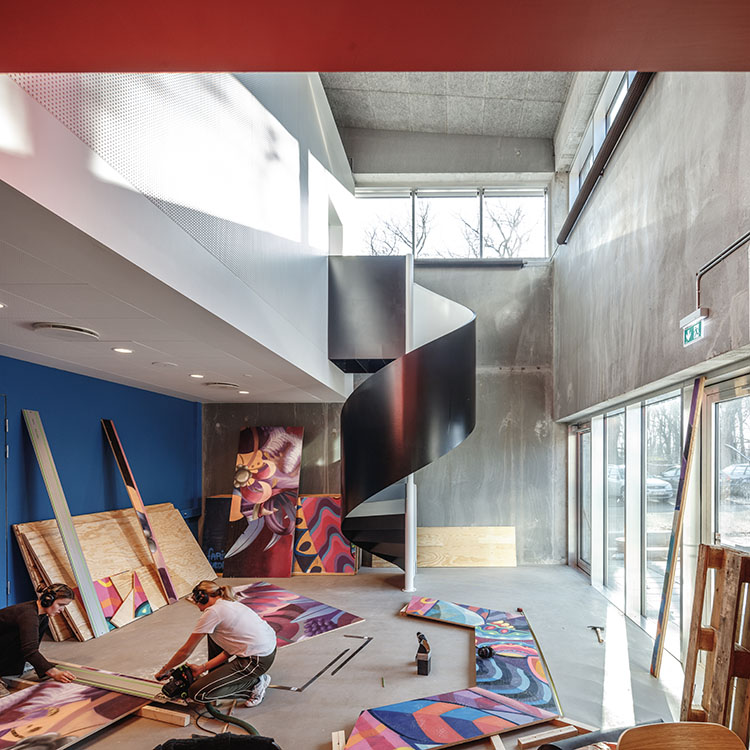 From the dwellings, the students have a view of the neighboring Ragnarock Museum with the golden aluminum facade to one side and the skate section of the Rabalder Park to the other. Each floor is home to 15–20 students. In addition to their personal dwellings, the students have access to a common space with a kitchen, lounge area and working niches. Next to the student blocks, there are four-row houses with dwellings for the teachers at the folk high school. The row houses too are based on room-sized prefab modules with sinusoidal and trapezoidal cladding. 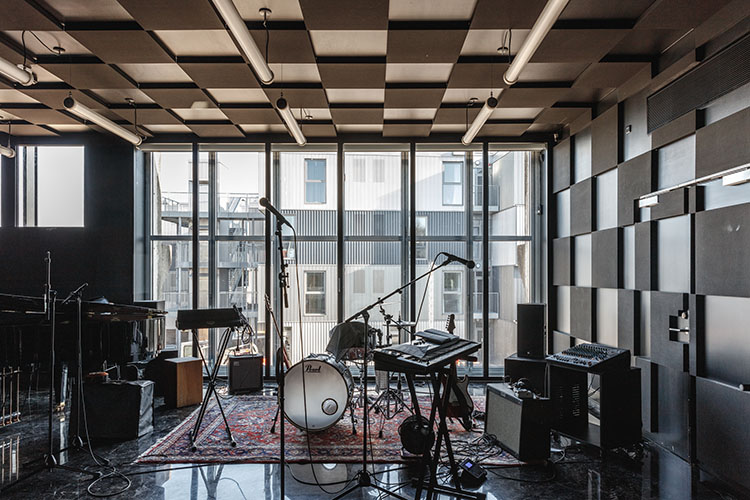 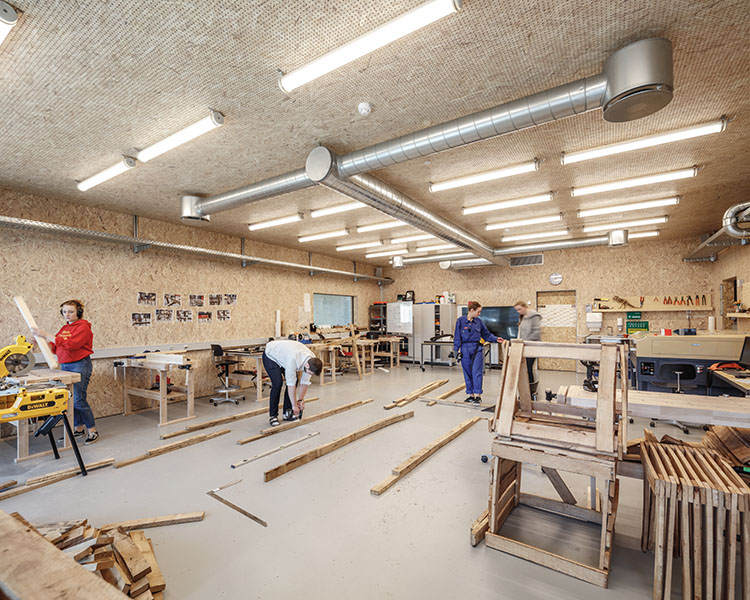