Nestled in the vales of the Eastern Townships, near the Vermont border, the Abercorn Chalet is the brainchild of Laurent Guez, designer and partner at Tux Creative. His aim was to create a unique living experience through architecture, embodying contrasts of harmony, open spaces and cozy areas. From the road, the house looks like a modest contemporary cottage. However, it actually consists of four large interconnected modules with several offset façades, each containing ample windows that overlook an in-ground pool and a garage/workshop. “The group of structures is reminiscent of a farm, with a central courtyard and outbuildings,” says Guez. 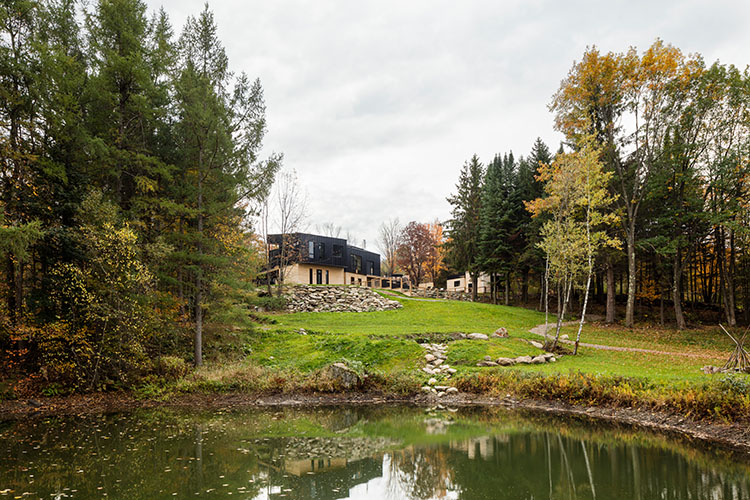 Opposites are freely expressed here, particularly in the choice of materials: wood, concrete, corrugated steel or chequered steel plate and industrial metal. The raw character of such materials complements the architecture, which expands through a succession of volumes and perspectives, giving it “a warm personality, a playful spirit and plenty of soul,” Guez adds.

This progressive discovery ploy also applies to interior spaces. The arrangement of the windows, which allows to glimpse the action between the modules, the contribution of a footbridge, light from pierced ceilings and a minimal amount of doors integrate this approach: “I wanted to create a spacious and discreet living space where every piece affirms its character and encourages an interconnection, strong and intuitive.” 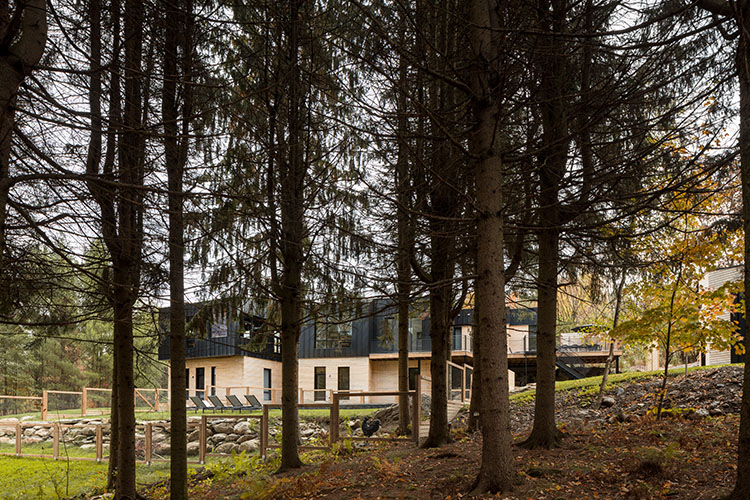 The master bedroom has some surprising features: crossing the walk-in and the bathroom leads to the bedroom, an approach that reimagines the codes of convention in favour of the experience. Another example of revisited rooms: the guest rooms. Being temporary living spaces, they do not have shelving or cabinets, therefore placing all the emphasis on the view outdoors. Even the size of the doors are non-conventional, one being reworked to an 11-foot height, is found near another that is 6 feet tall. 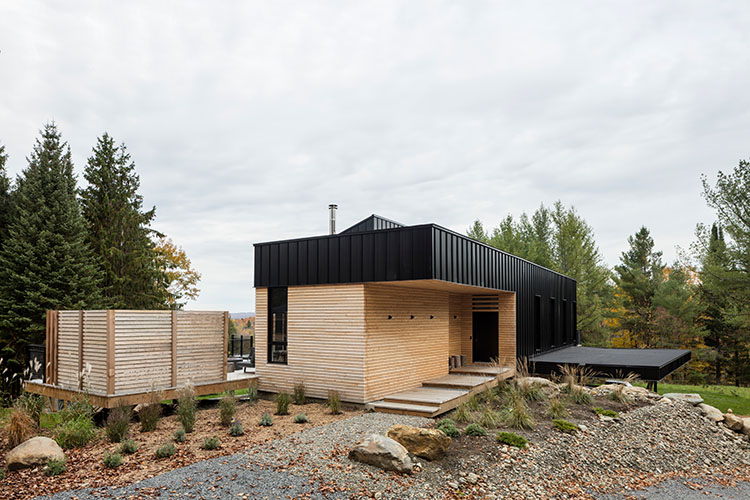 In the kitchen, rather than a standard complement of cabinets, the space is organized around two functional islands, recalling a restaurant kitchen. The layout showcases cookware, cookbooks, seasonings and ingredients stored in wooden baskets.

This arrangement encourages play and exploration. Located at one end of the house, the kitchen is surrounded by windows. Carefully calculated angles of view encourage users to contemplate the patio, garden and, in the distance, the region’s valleys. It is an approach that produces a sensation “of being both on the sidelines and in the heart of the action,” says Guez, who developed his vision with architect Guillaume Kukucka.

“I have never seen a project like this one!” This sentence he has heard many times among his stakeholders and suppliers, voluntarily chosen locally. “They were very proud and motivated to participate in the creation of the residence.”

“Think of a pig barn,” he would tell them with a laugh, trying to shock them while pointing out the project’s rough and fun sides. The interior use of traditional exterior cladding, like corrugated or profiled sheet metal, painted black or gold, disrupts reference points and induces a sensation of being outside, in another place, while actually being inside. “You get the same effect when camping, where you feel as though you are part of nature and yet are protected.”

The fireplace also showcases an industrial spirit, with dimensions to match, while the sinks and bathtubs, both salvaged and purchased second hand, are fully restored to life. 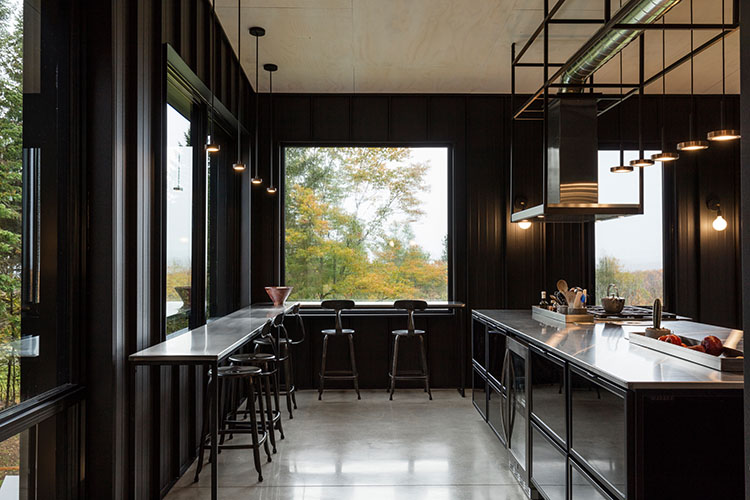 The northern orientation of the lot and certain other constraints led to the optimization of the building’s positioning, and to a clever arrangement of the windows—including the skylights—to favour the entry of light, according to the hour of day, the seasons and lives being lived inside the house. “I analyzed the trajectory of the sun, and I also modelled its reflections on the sheet-metal walls. As the hours go by, the light creates interesting shadows and animations,” he says. 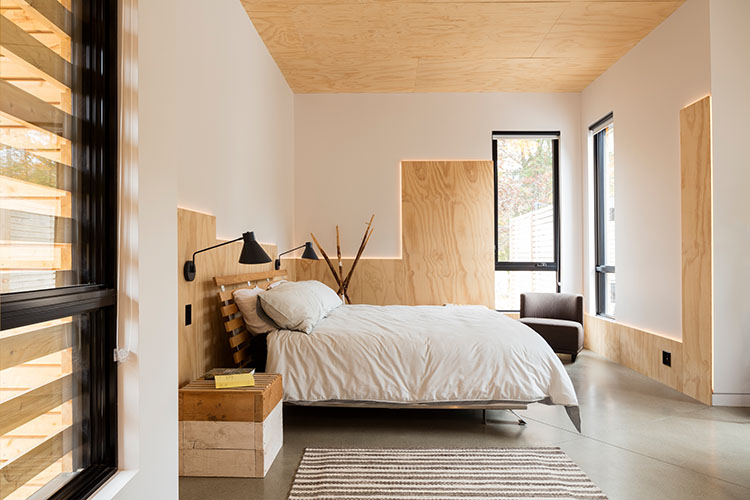 Inspired by architecture, functionality, suspense novels, stories, and Escher’s drawings of improbable constructions, Laurent Guez reconciles lightness and humour with rigor and rationality. With the team at Tux, a Montreal-based agency serving a North American and European clientele, he plans to apply the principles and creative approach of Chalet Abercorn to future projects of exceptional residences, hotels and leisure.

“This home represents the sum of my professional experiences, my childlike gaze, my studies at the Ensaama School of Art and Design in Paris, and my travels. It embodies simple but powerful ideas.” 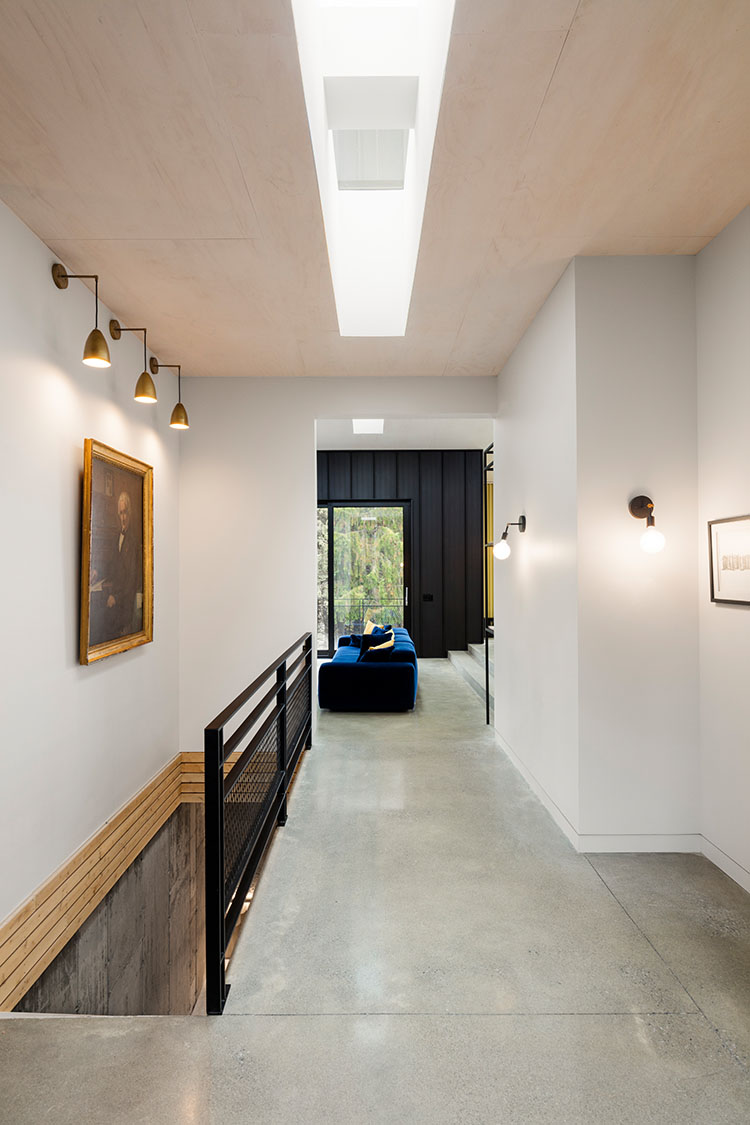 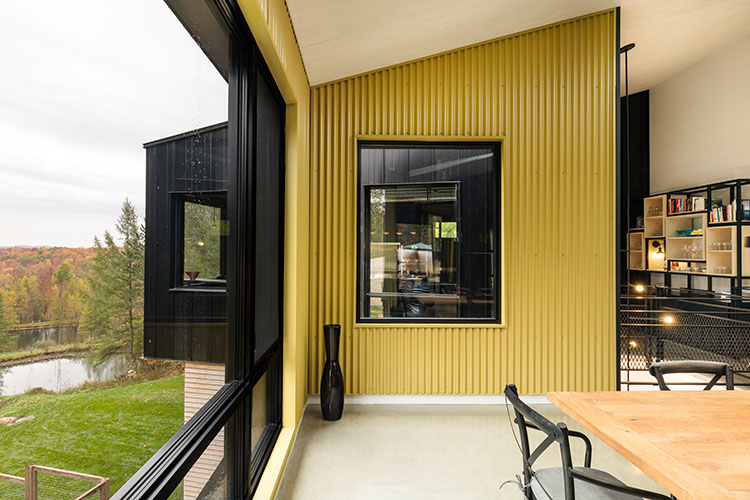 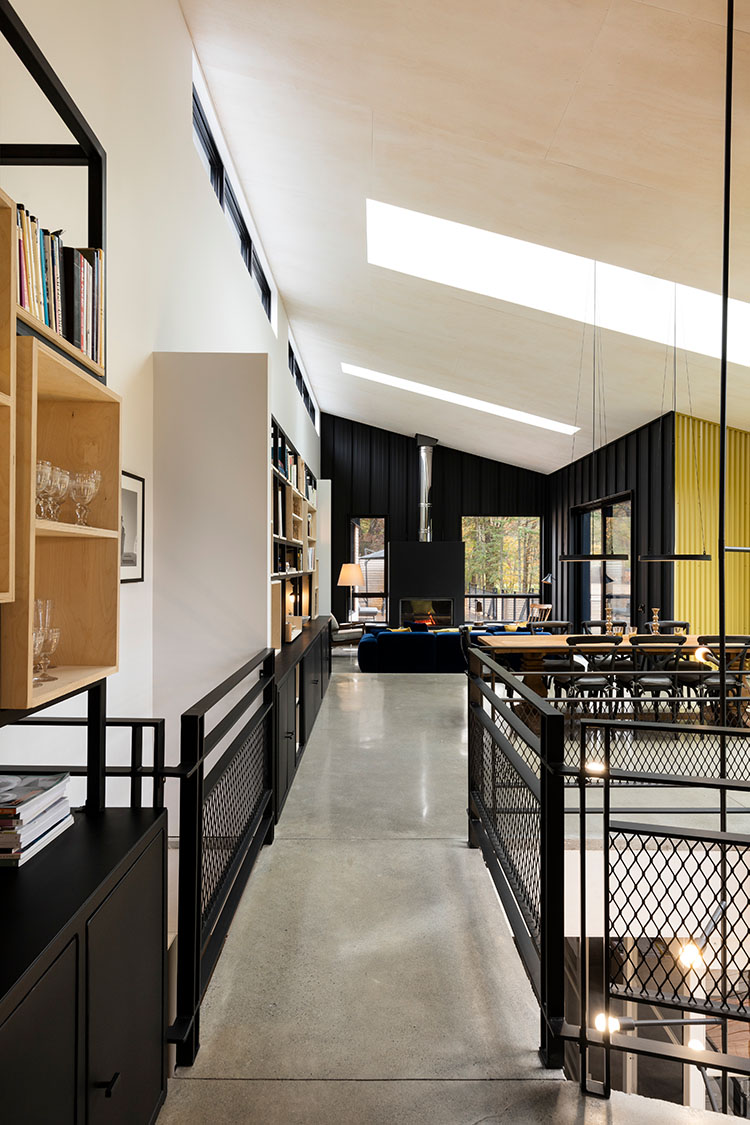 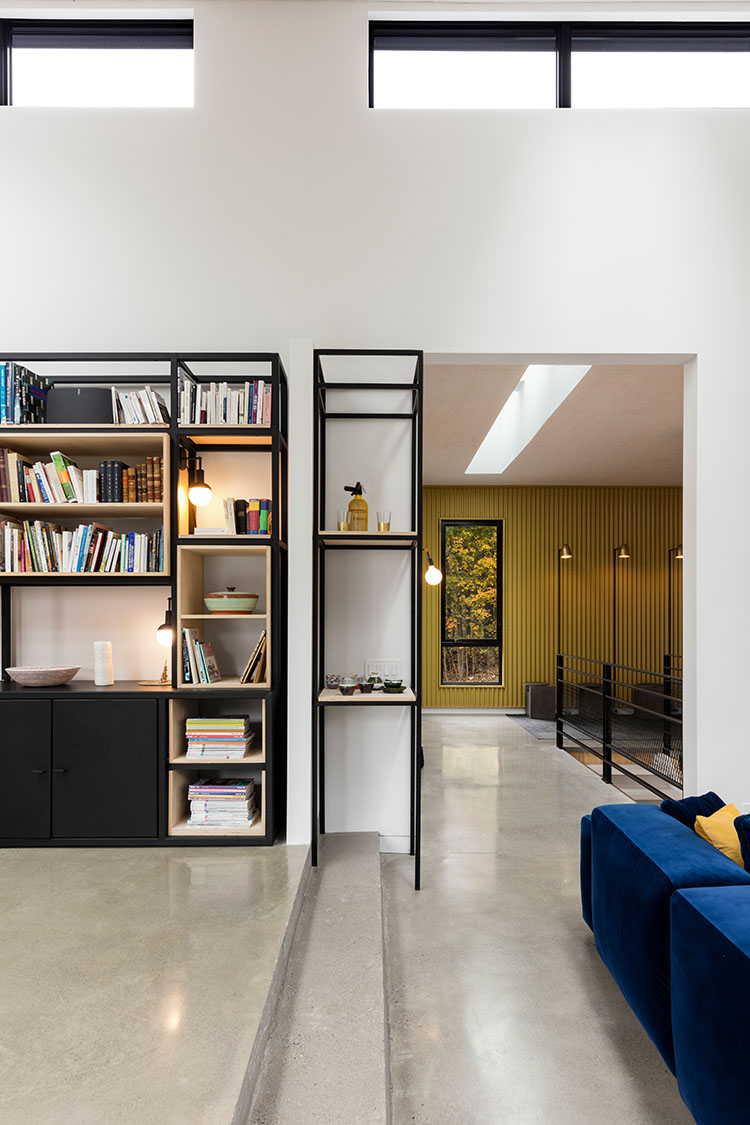 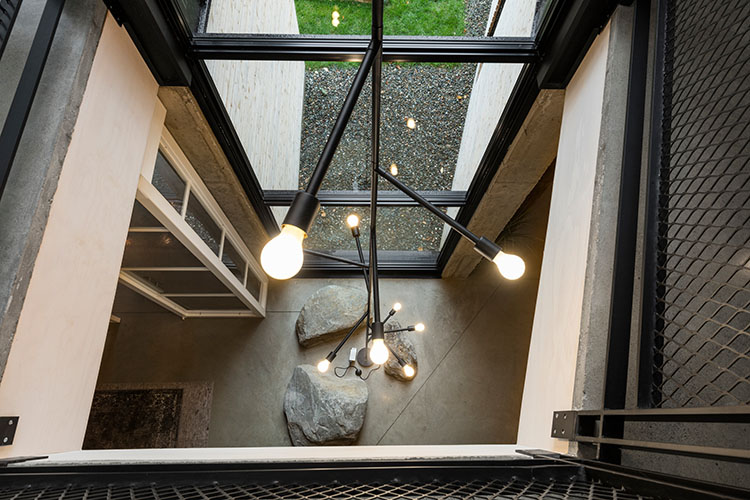 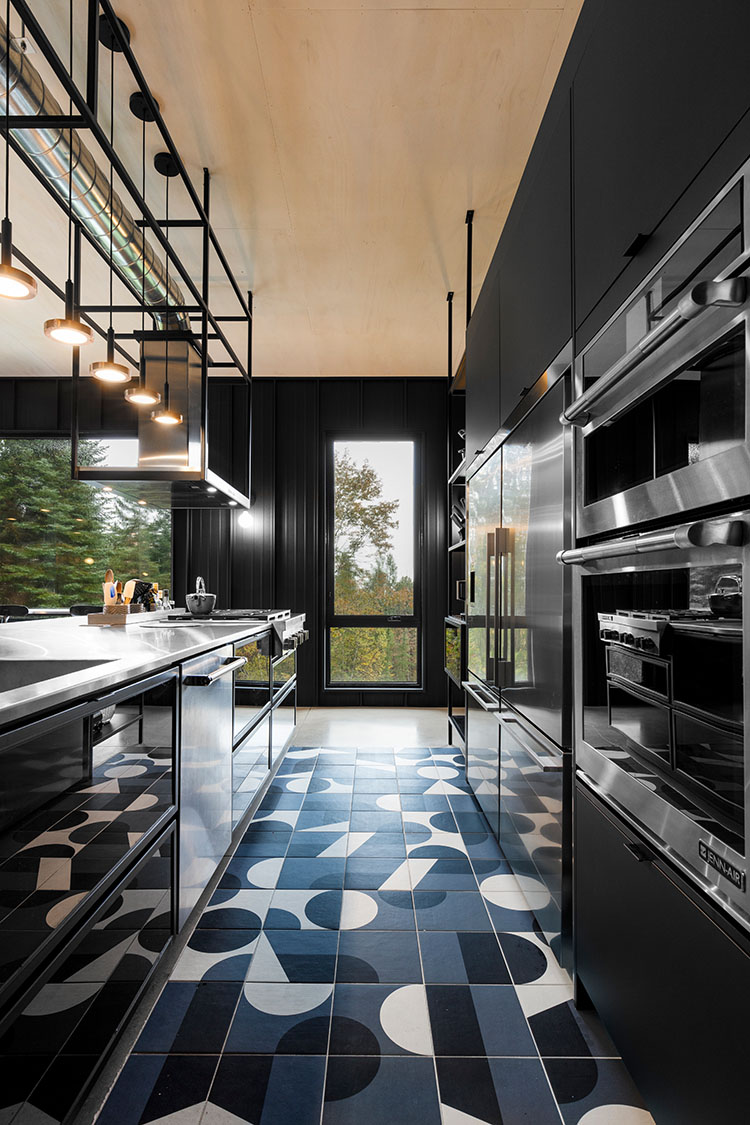 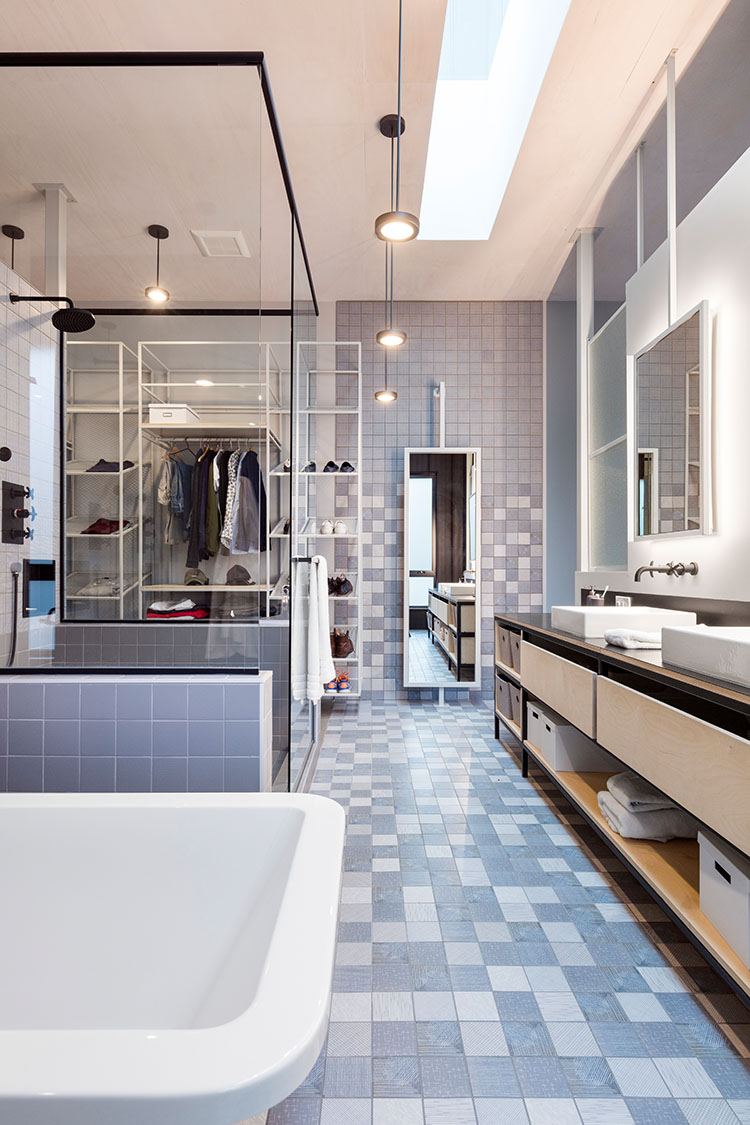 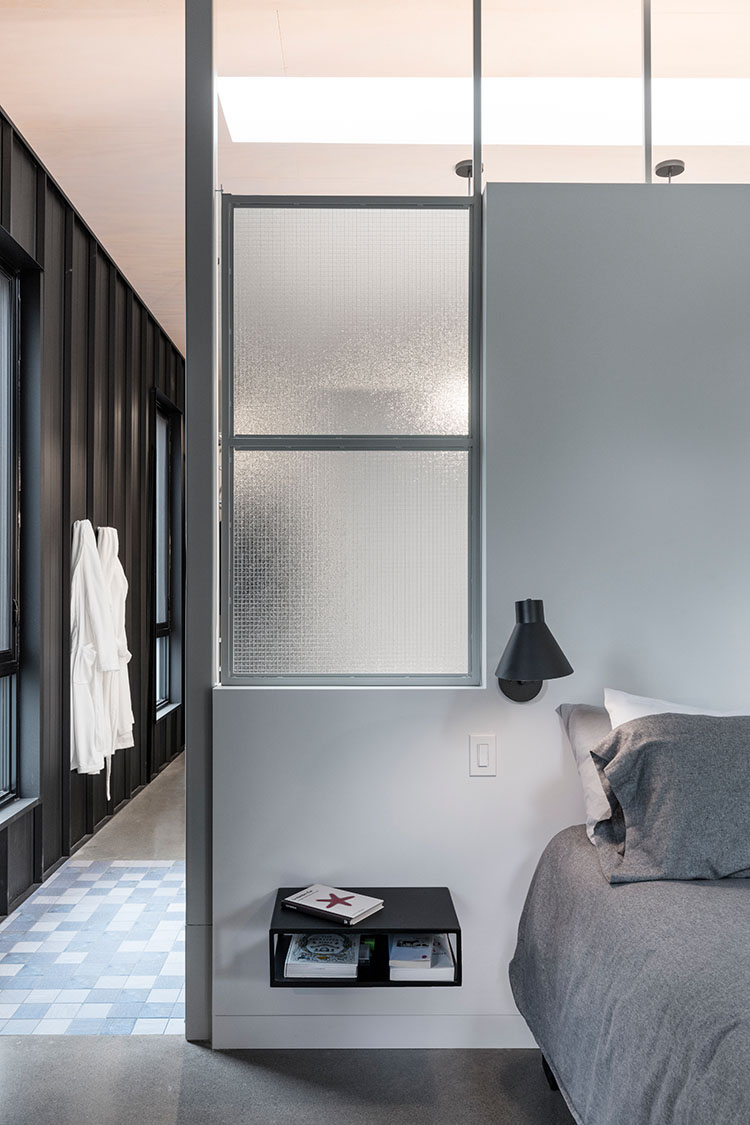 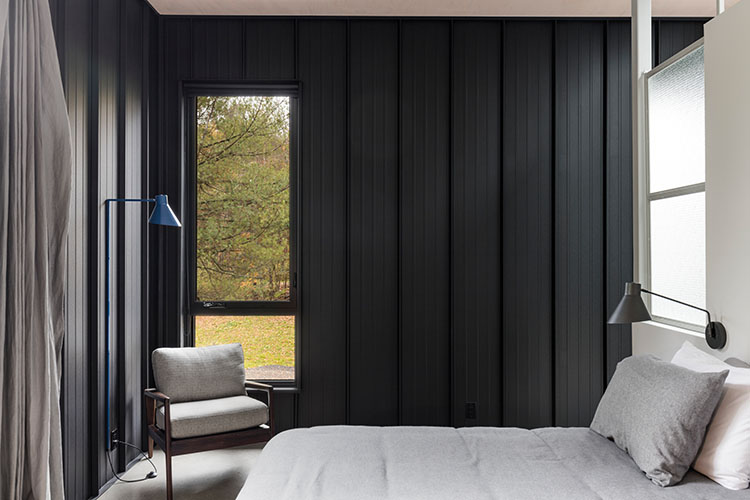 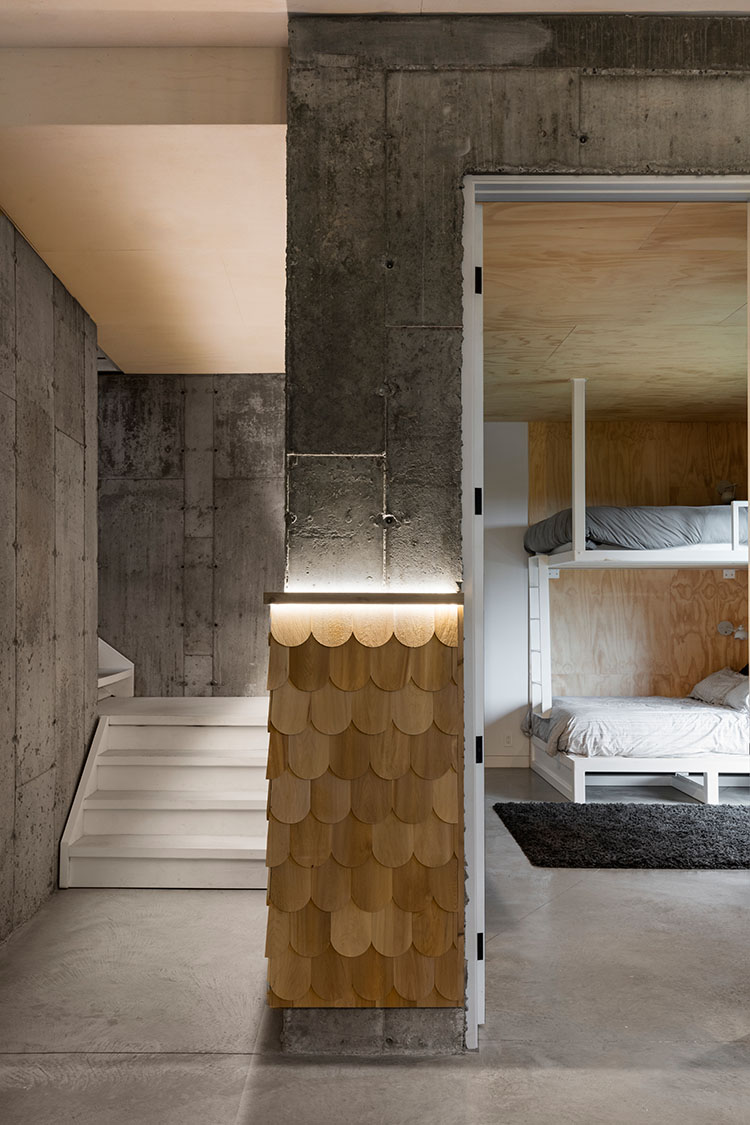 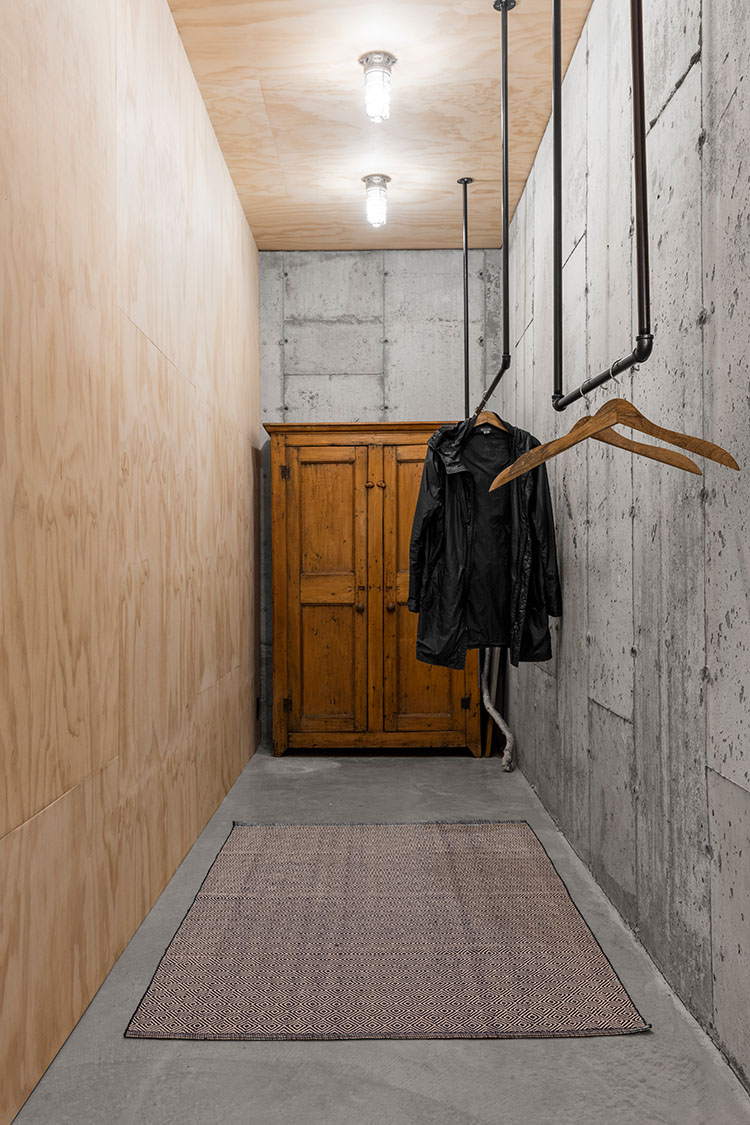 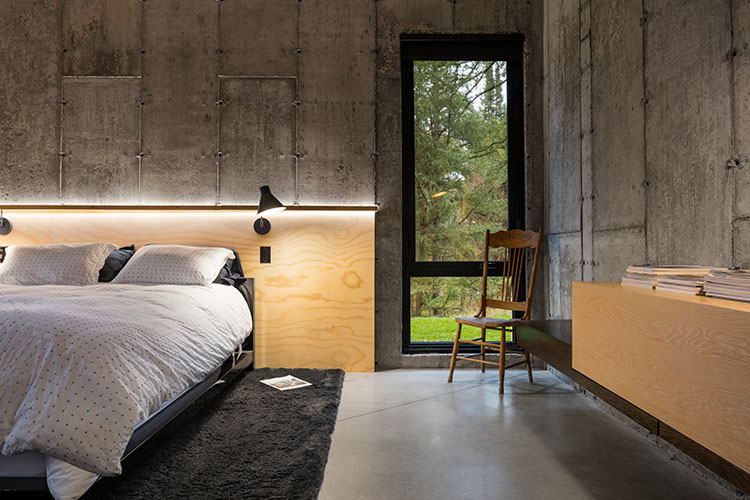 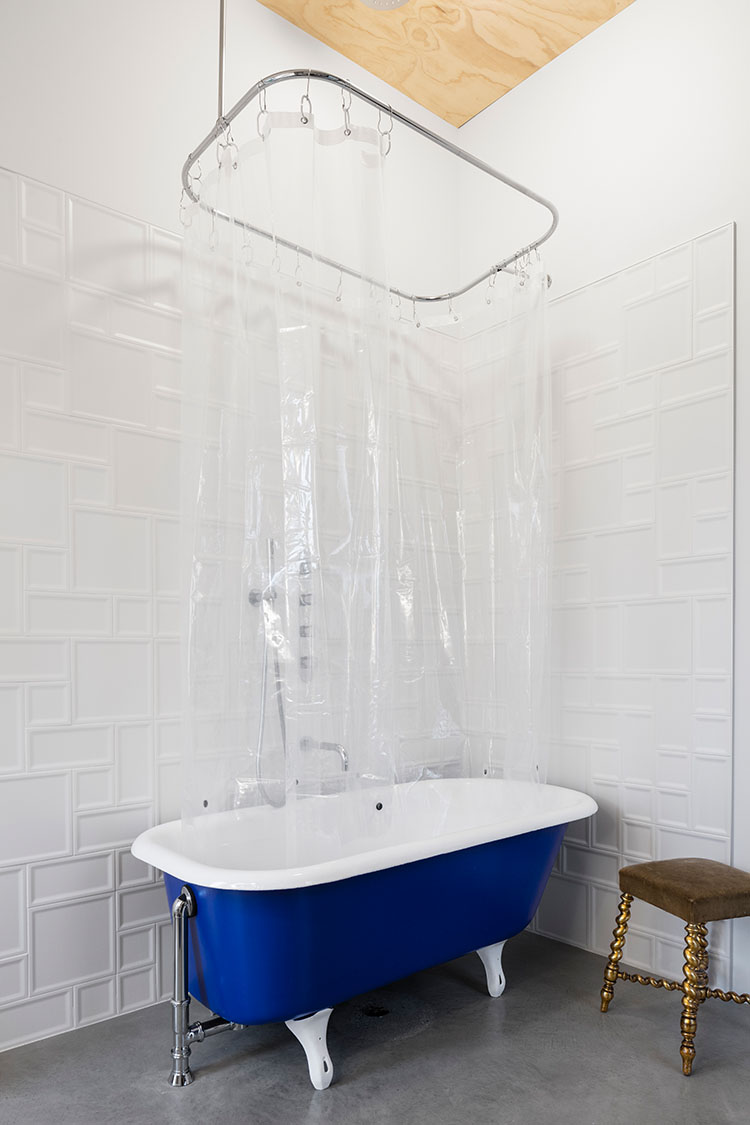