New York studio GRT Architects has recently updated an early 20th-century four-story brick townhouse in Brooklyn’s Prospect Lefferts Garden neighborhood. This twelve-block residential neighborhood was Landmarked in 1979 and the appearance of buildings within were often governed by covenants set in place by the Lefferts family that controlled heights, setbacks and façade materials. The earliest buildings in the area show the influence of then popular H.H. Richardson in the classic Romanesque styles, but the 1893 World’s Columbian Exposition brought Neo-Classical Beaux Arts to the fore. 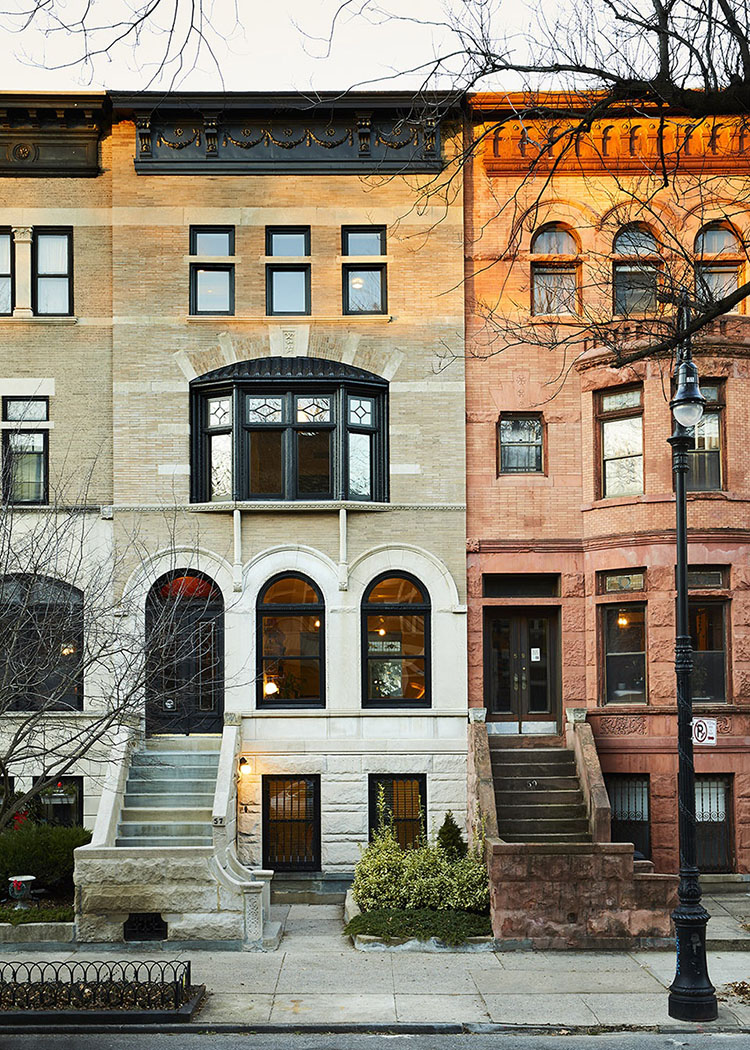 The townhouse in question was designed in 1898 by Architect William M. Miller who used an eclectic mix of Romanesque and Neo-Renaissance motifs. The building meets the ground with a rusticated base in Indiana limestone which is also used on the parlor level to create three identical Romanesque arches. Above, limestone is used for lintels and keystones but is primarily composed of an elegant Roman-proportion brick.

Windows are unique on every level, showing semicircular transoms at the parlor, a single large projecting bay supported by limestone colonettes on the second level, and asymmetrical single-hung openings with limestone spandrels at the top. The building is topped by a bracketed and festooned cornice. At some point a two-story addition was built in the rear, and in 1940, the ground floor was turned into a doctor’s office. Both modifications conspired against a way of living in the home that suited our clients’ needs. GRT was therefore hired to reconsider not just the aesthetics but the organization of the building. 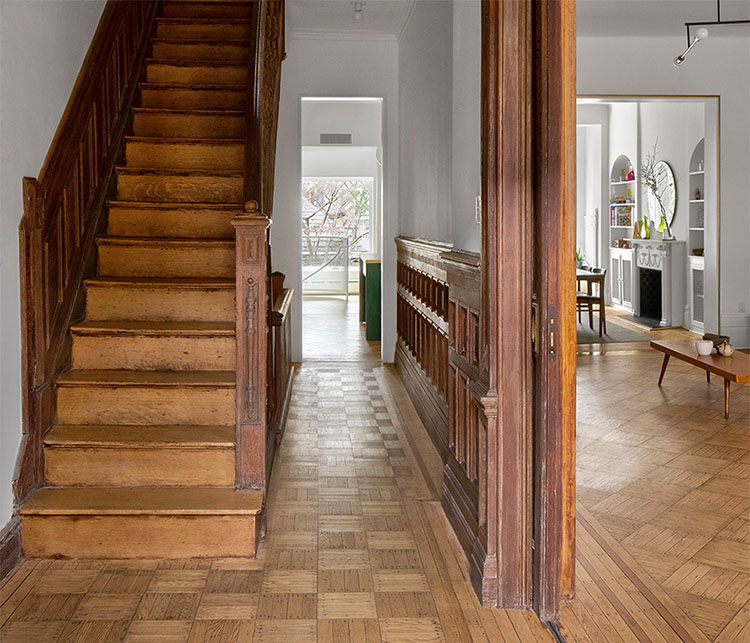 “When working on historical buildings we begin by establishing an attitude of new to old,” said GRT Architects in a project description. “As landmarked buildings require a literal approach to facade preservation, we set a gradient from invisible improvements facing the street to obviously new elements towards the rear. To blend the two we created framed views through the building on every level. Detailed consideration was given to the way in which portals are marked.” 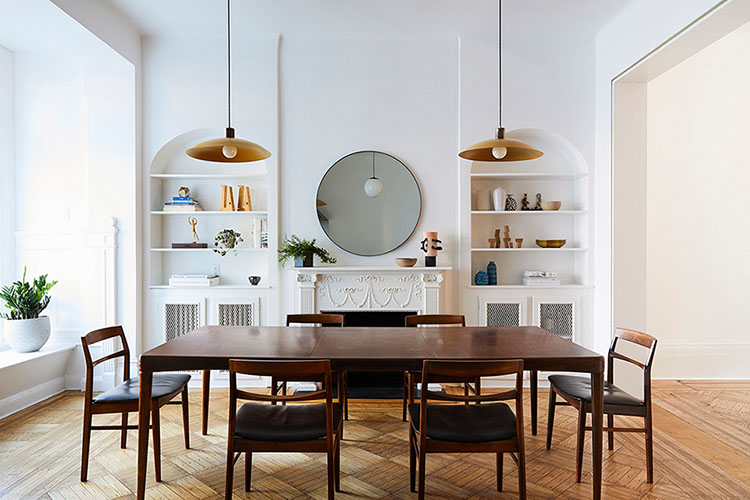 Starting at the exterior, all of the building’s unique windows were replaced with insulated replicas, custom-made to be visually indistinguishable from the originals. At the front of the building, GRT Architects used a lighter touch, leaving many stained wood elements such as door casings and wall cladding in place.

“We secured approval from the Landmarks Preservation Committee to enlarge several openings at the rear, and did so using simple picture windows that clearly identify themselves as modifications rather than restoration,” explains the design team.

Views from the preserved living room to the entirely redesigned kitchen and dining room are framed with a newly enlarged opening trimmed on all sides in unlacquered brass. The wide plate brass threshold on the floor echoes the thick decorative borders on the parquet floors which were left untouched. The dining room is a transitional space between the old and new — in this space the architects simplified the material palate, painting all decorative woodwork matte white to emphasize its geometry over its materiality. 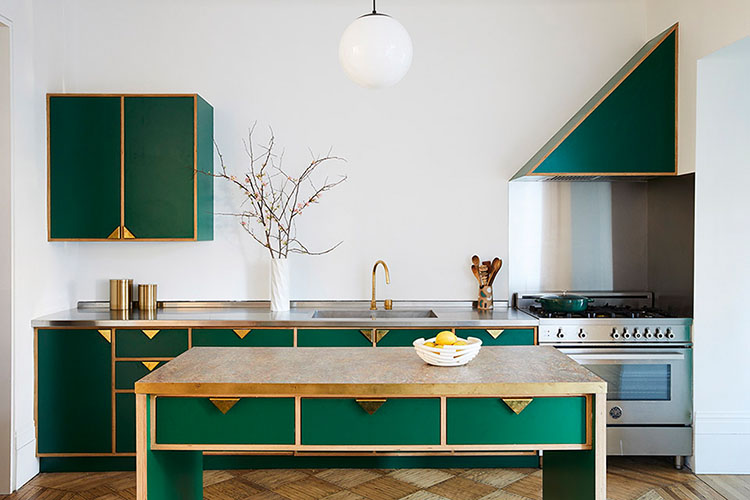 Previously the kitchen was located in a modest, rear addition, separated from the dining room by a narrow door. As the kitchen sits in dialog with unrestored portions of the 19th-century interior the studio sought to avoid an ‘over-renovated’ appearance. Green linoleum cabinetry in the kitchen is decorated with golden details, including a shiny island countertop made by Forbo Marmoleum. Triangular brass pulls were custom made by GRT Architects, and are used throughout the home. To foreground the untouched decorative parquet, the studio has designed an island that touches down lightly on the floor.

White space was preserved in the kitchen by creating a pantry in the addition. Here the language of kitchen cabinets is extended and also conceals a refrigerator. A custom spiral stair in perforated and plate steel was added to connect the parlor floor to the garden below and provide convenient access to a new powder room, something most townhouses lack. 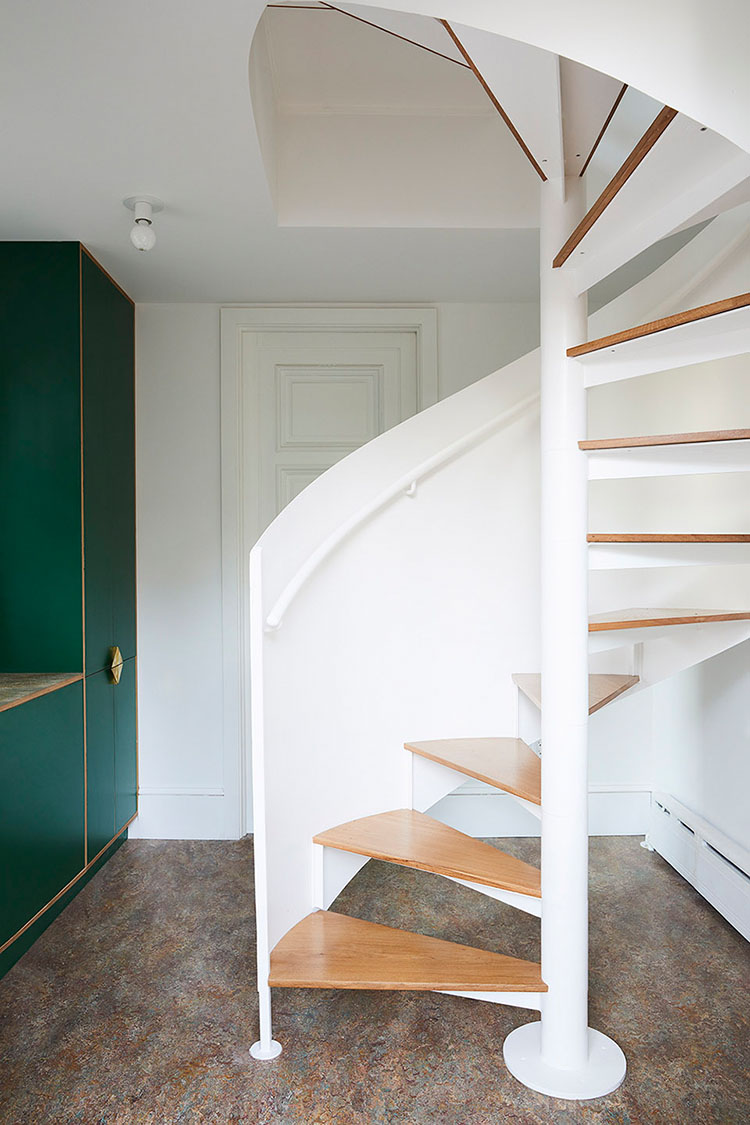 Similar themes play out on upper levels where the master bedroom was connected to an office through a thick portal that also serves as a walk-thru closet. Again the architects sought to explore materiality by lightly staining closet doors green, continuing a chromatic theme in a different register and highlighting the grain of the wood doors.

This exploration continues in the recladding of a damaged fireplace in hand-glazed green tile and the petrol blue-green cement tile in the master bathroom, also selected to complement a unique enameled bathtub that was preserved. All bathrooms were renovated reusing their existing layout to preserve their stamped tin ceilings and balance cost. This highly choreographed play between new and old, contemporary and historical, led to a result that celebrates both and satisfies the demands of the new owners. 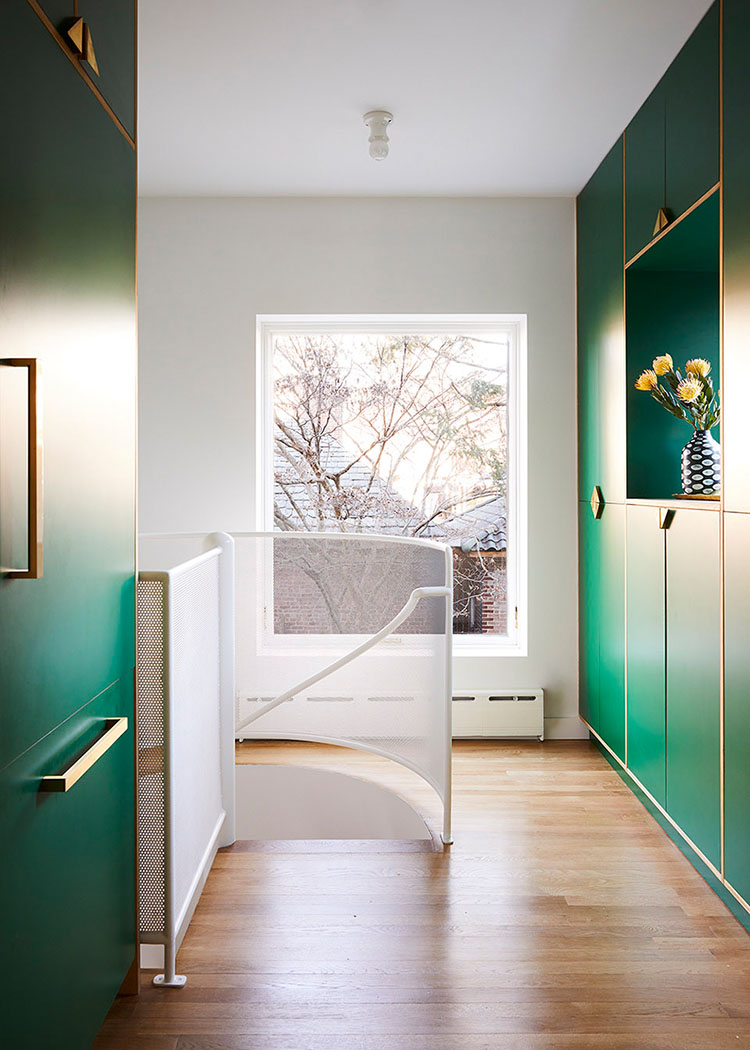 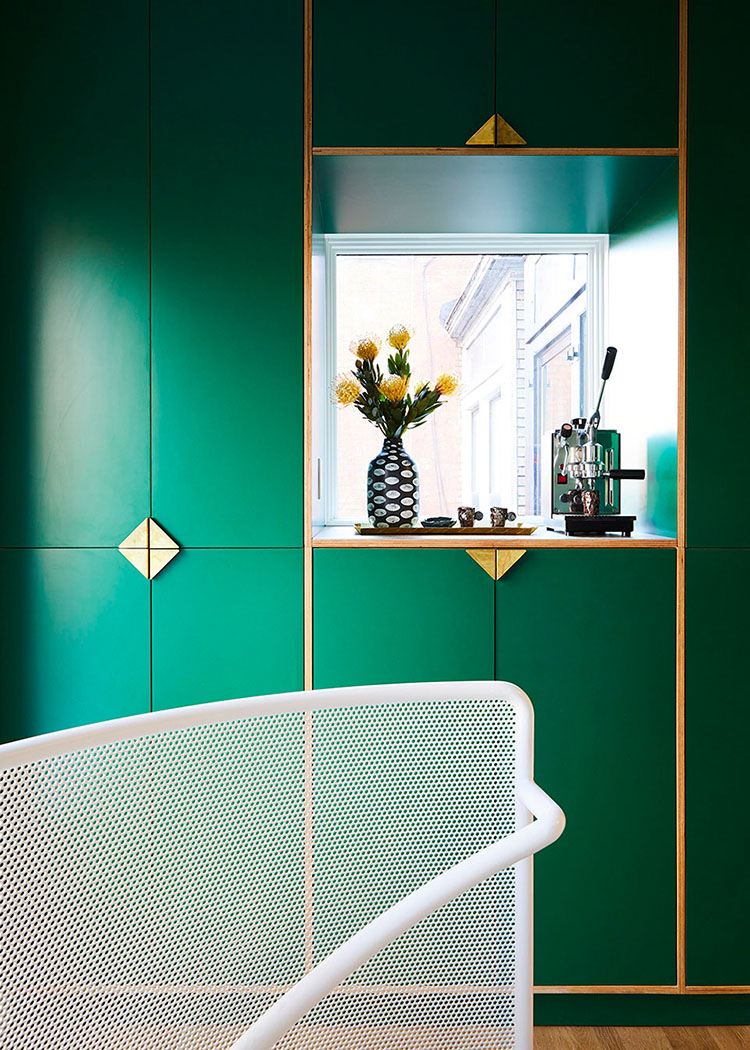 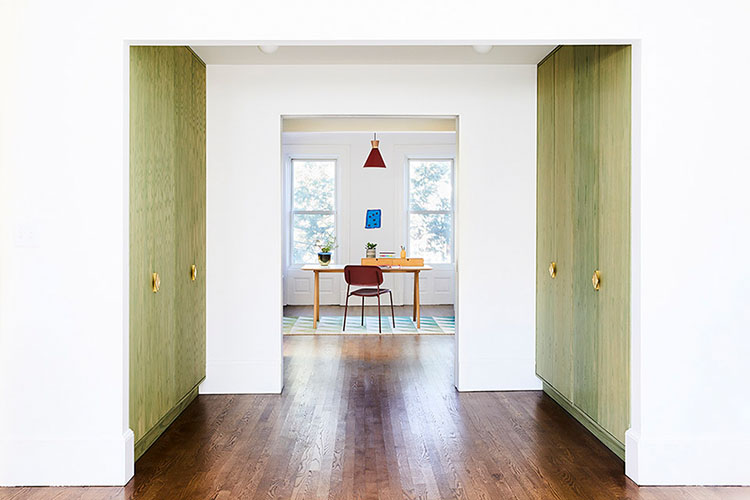 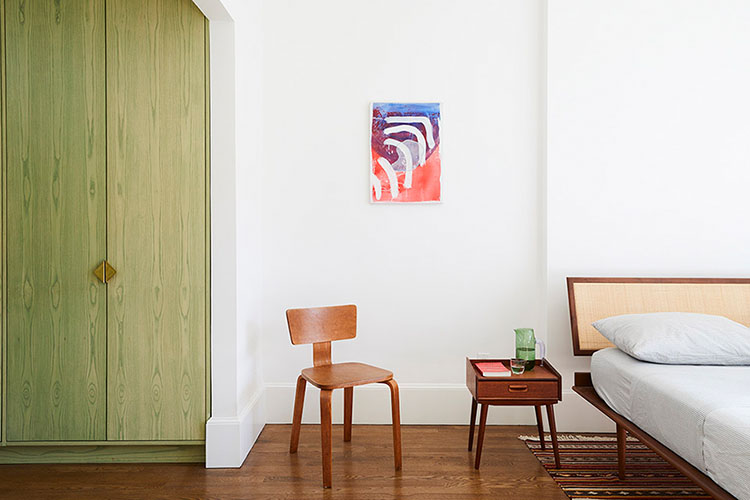 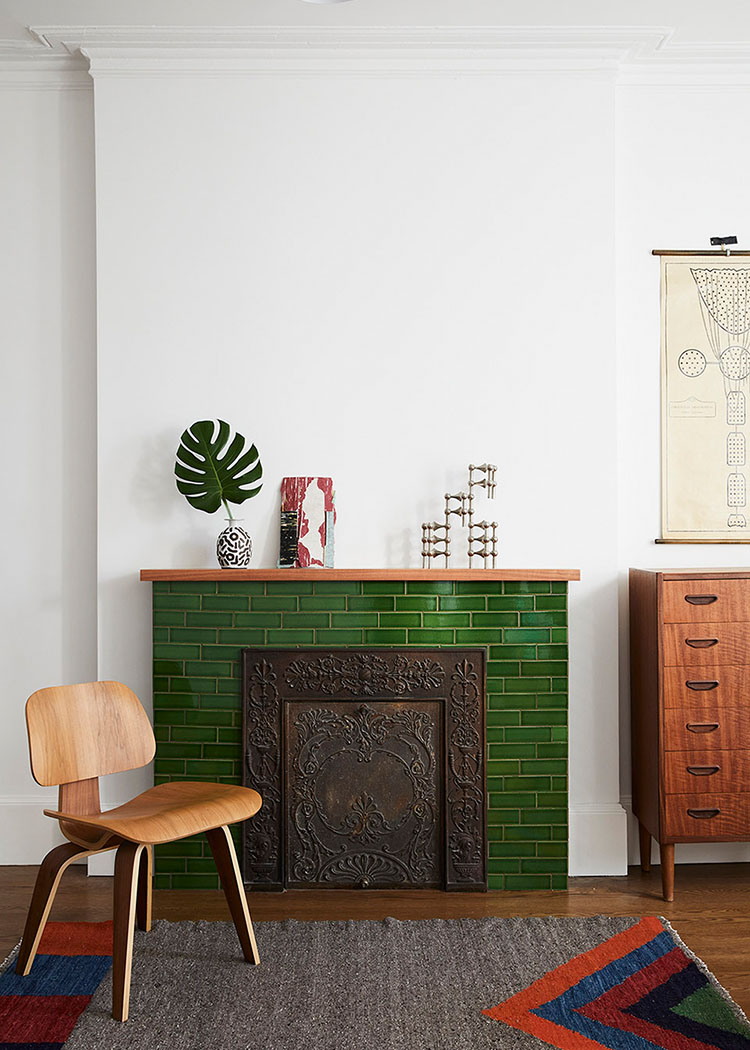 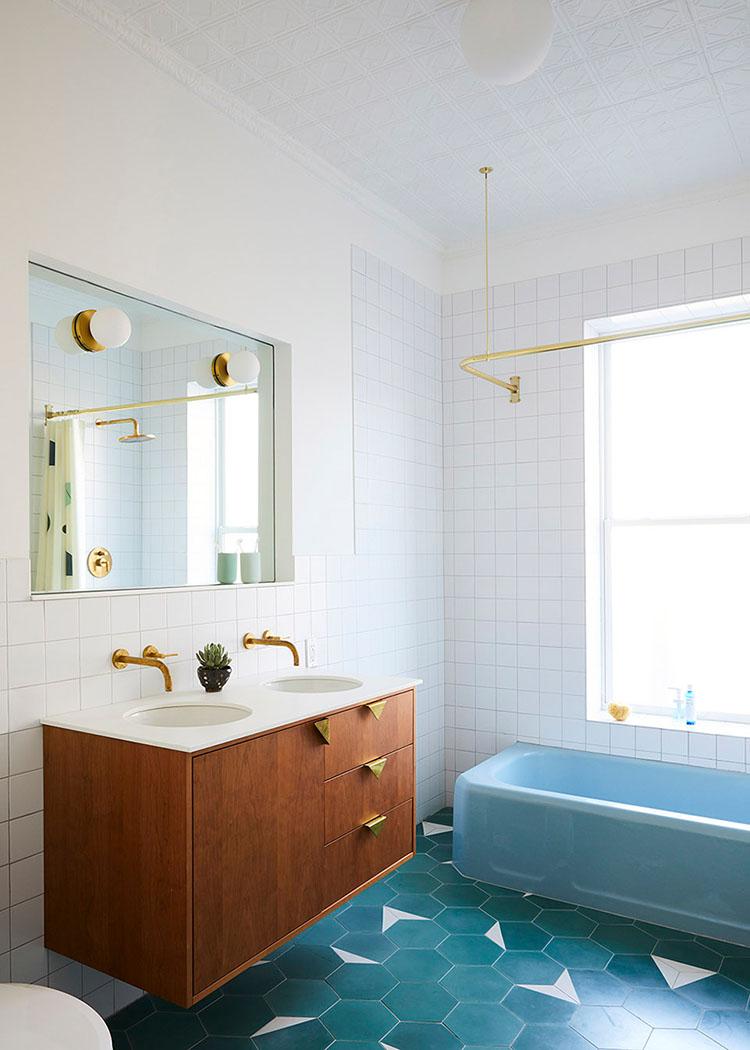 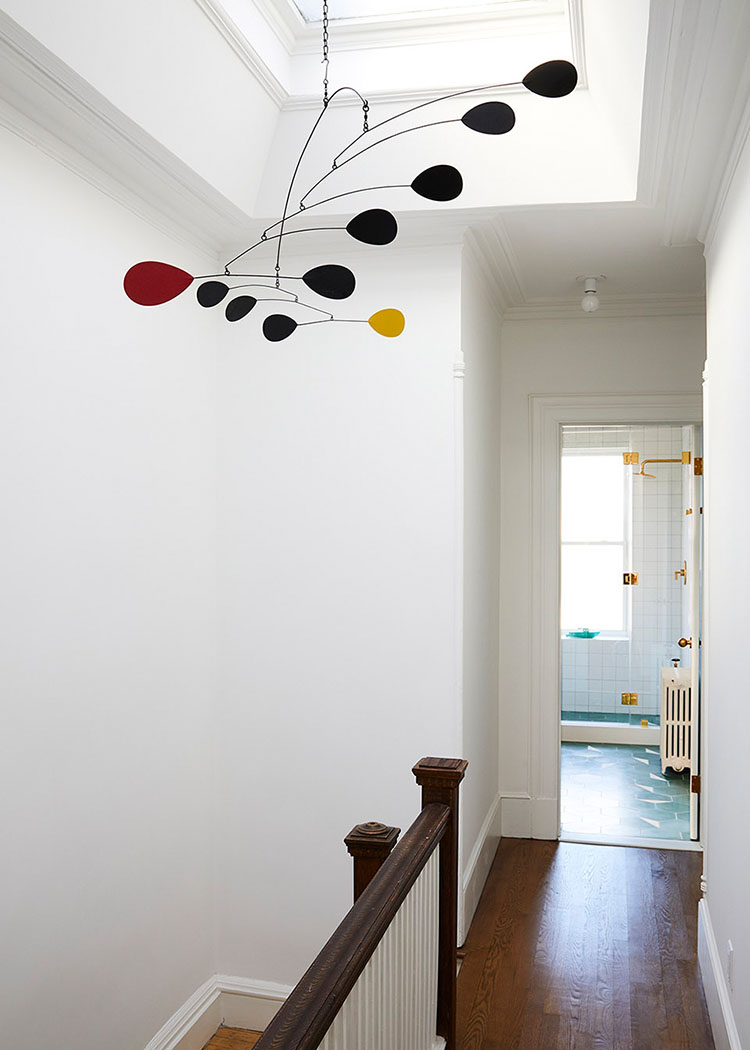