Japanese studio Tato Architects has built a house in the town of Sonobe, Japan, that features an entire façade made from polycarbonate panels. The region’s cool and wet climate encourages homeowners to erect lean-to extensions clad with corrugated polycarbonate panels that provide them with warm and dry sunrooms. “These so-called ‘terrace enclosures’ are often used as storehouses in winter, or as places for drying laundry – a clever feature, that we realized represents a certain style shared among the various new mass-produced houses of this residential district,” explains the studio. 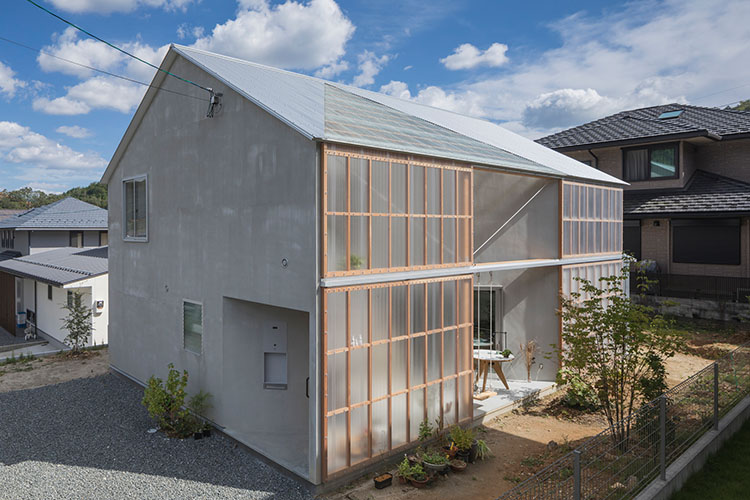 Tato Architects used these terrace enclosures as inspiration for the materials and functions of their sunroom. They also incorporated a wide-eaved terrace and other semi-outdoor spaces into the interior of the house. The expectation was that these would act as interfaces between the surrounding environments.

Regarding the volume of the house, the design team used a simple square grid and its diagonals to create the different spaces such as one that is intimately sized, and another containing a spacious void. To each of these, the studio attached semi-outdoor spaces. The wall of the sunroom is made from a large hanging door that can slide open to turn the sunroom into an outdoor area or enclose the second-floor space under the eaves. On the south side of the site, the architects followed the example of the neighborhoods lean-to sheds and created an alcove and storage space. 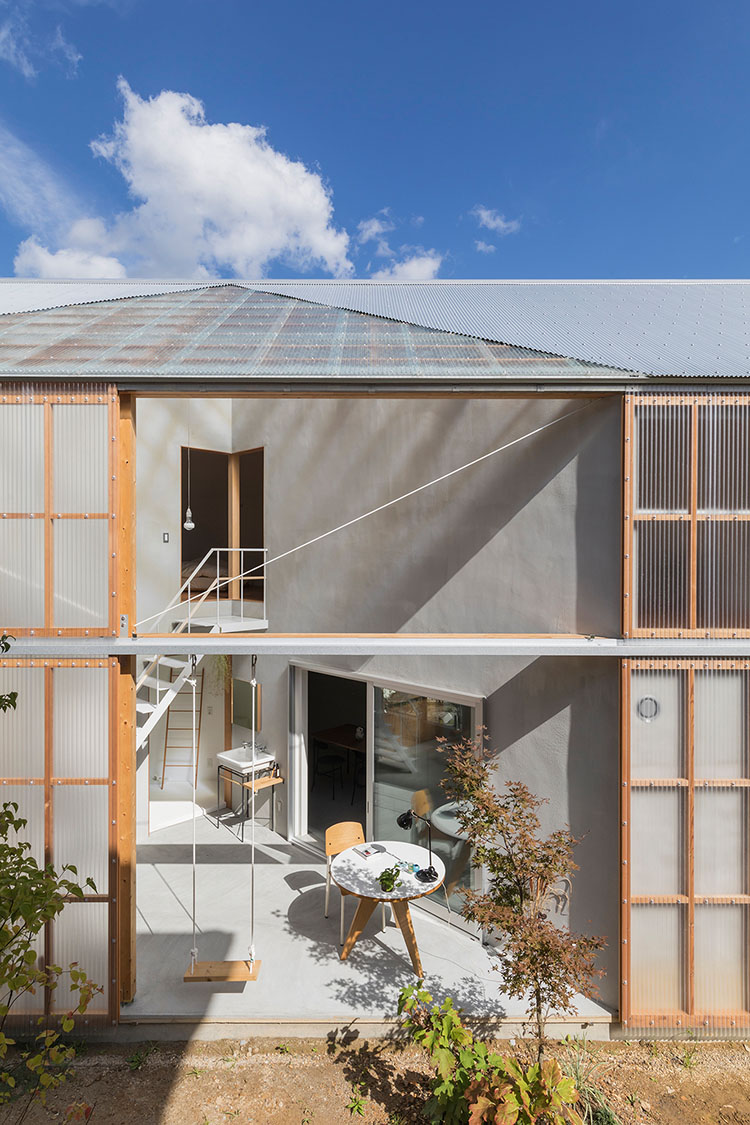 Around the house, centered on the site, Tato Architects piled up the earth left over from the foundation work in an attempt to reclaim the original slope that existed before the site was developed into tiered platforms for residential development. This reclaimed mound of the earth will be covered in grass, and with time, the owners will make it into a garden.

The interior is finished using Moiss, a material that catches light and regulates humidity. Glass inserted at the boundaries reflects and permeates the light, like facets of a crystal. This house embodies a variety of interior scenery intermixed with landscapes from near and far. 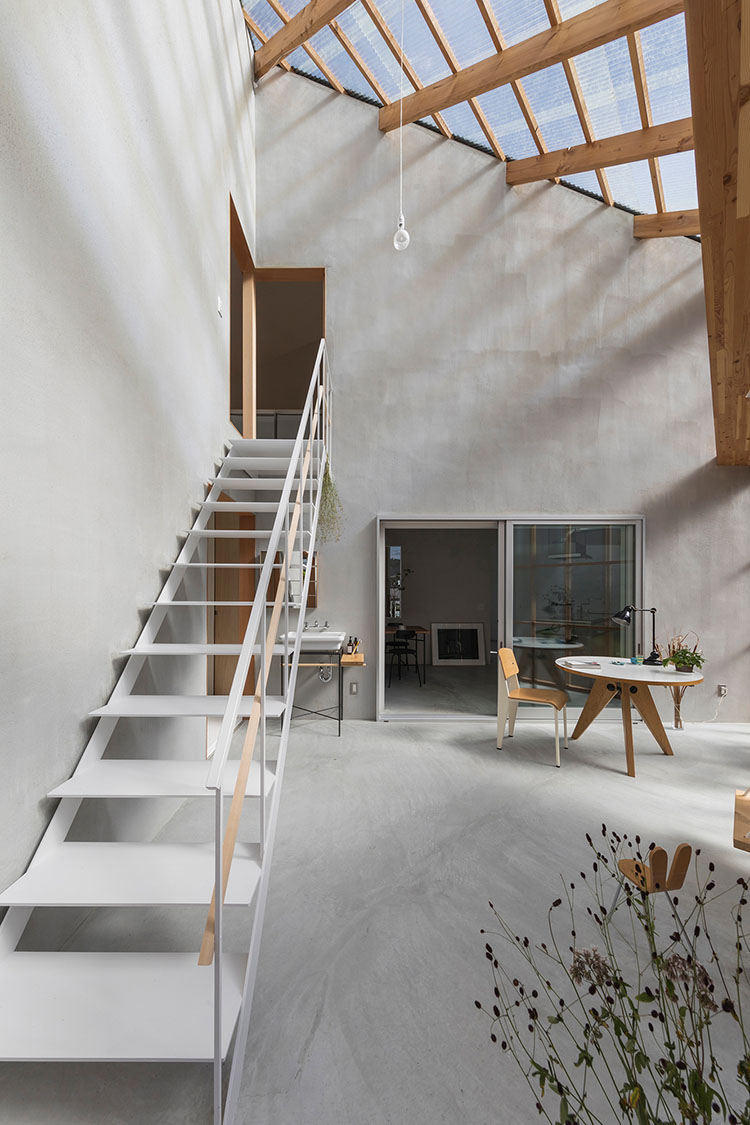 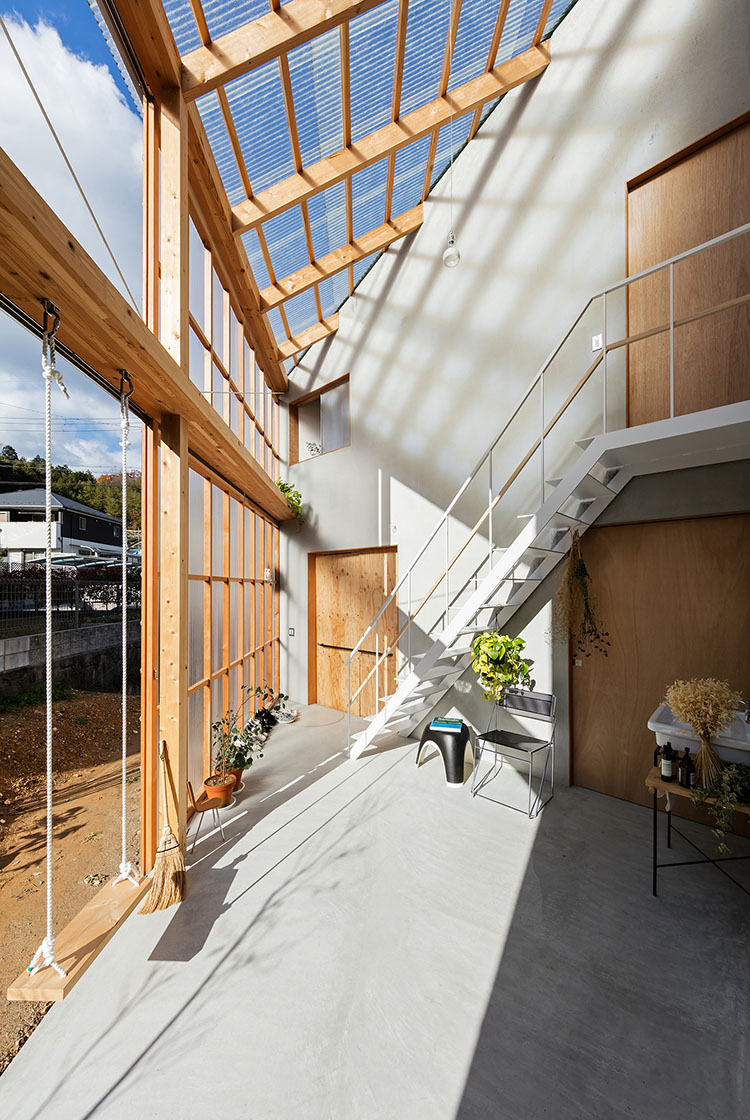 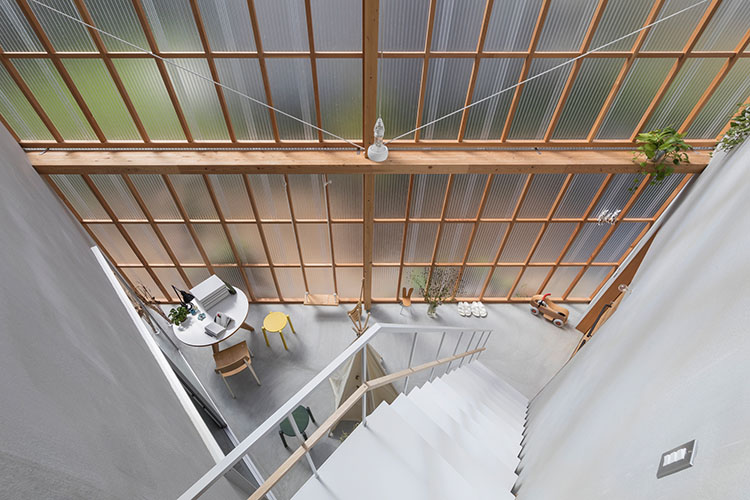 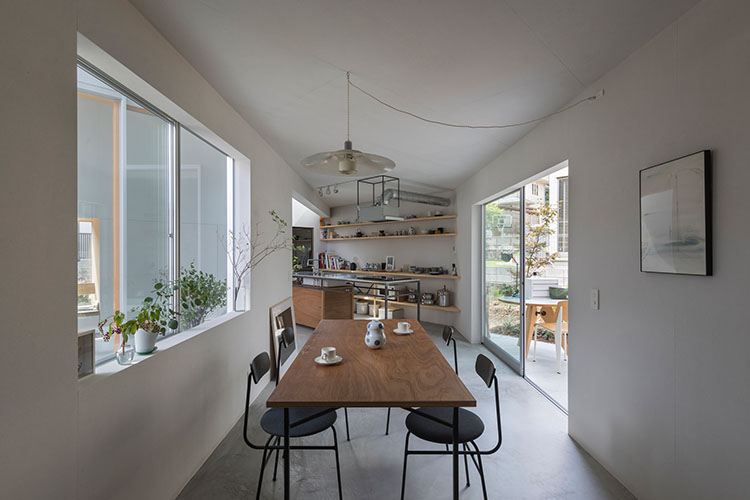 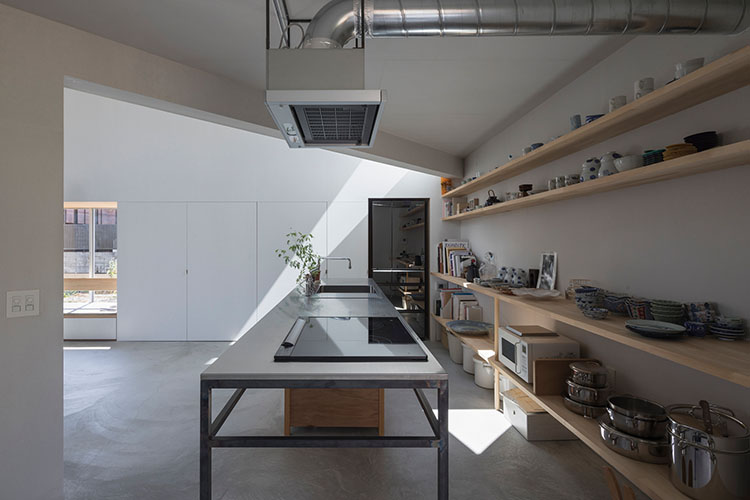 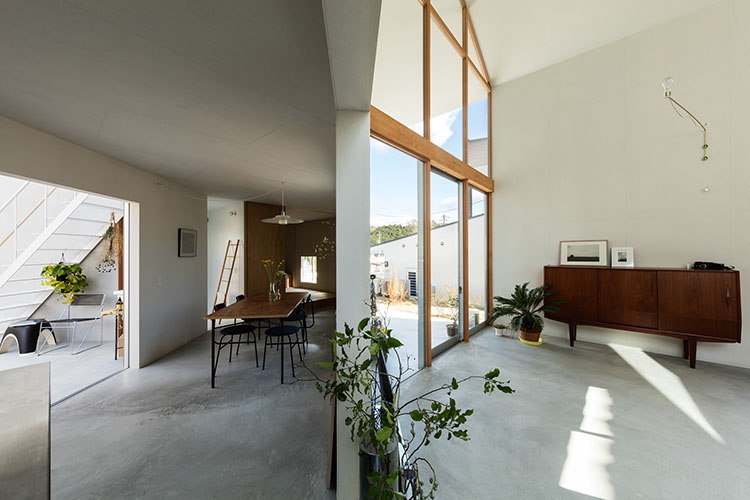 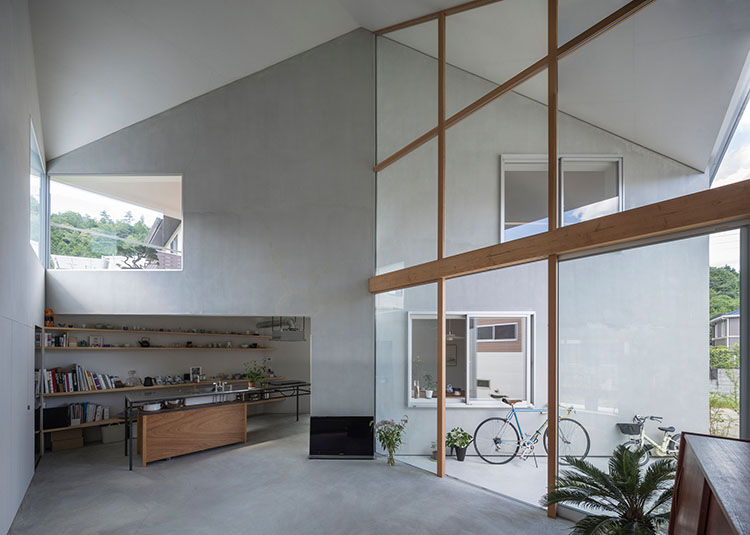 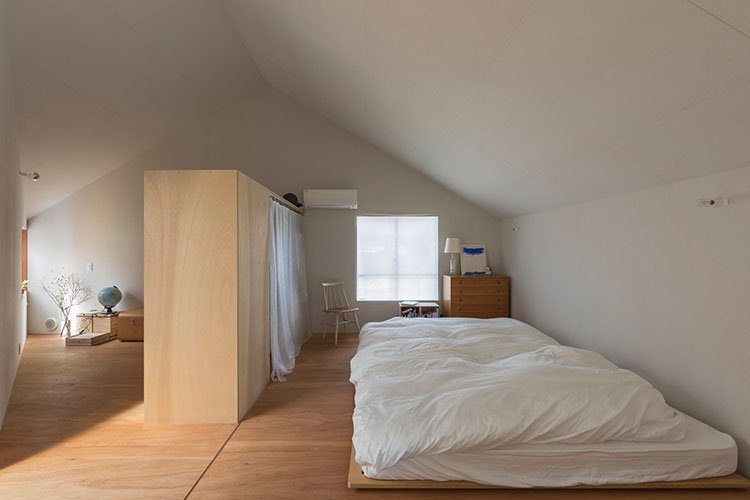 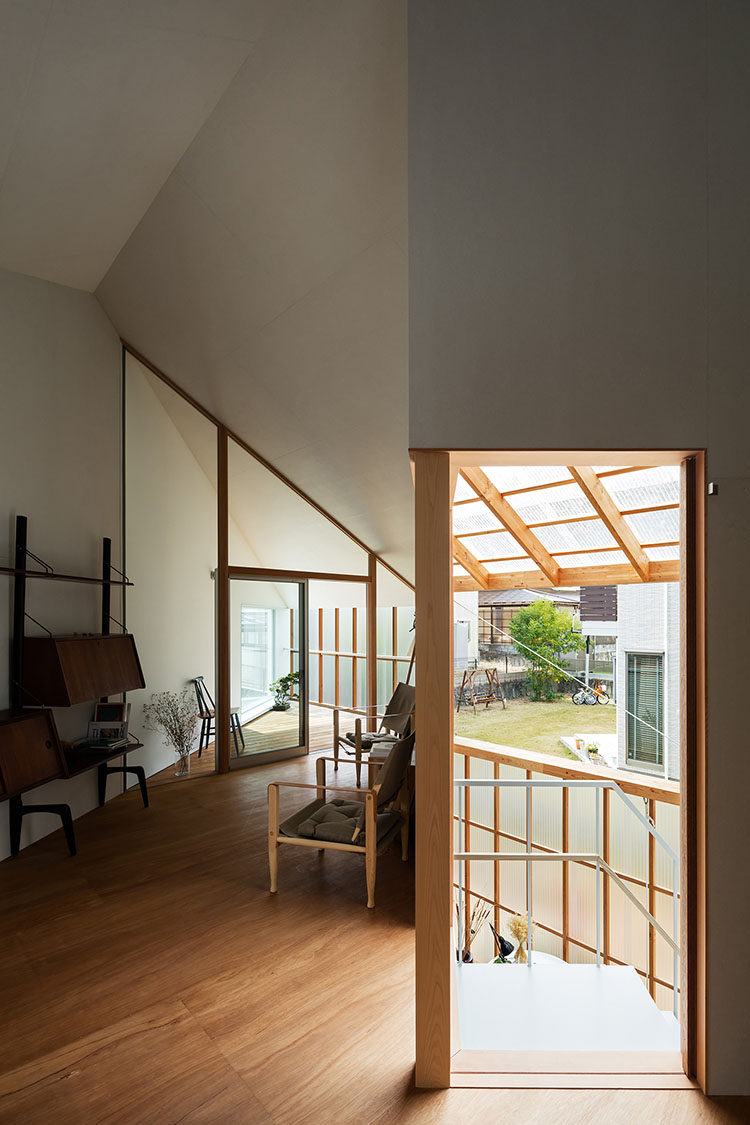 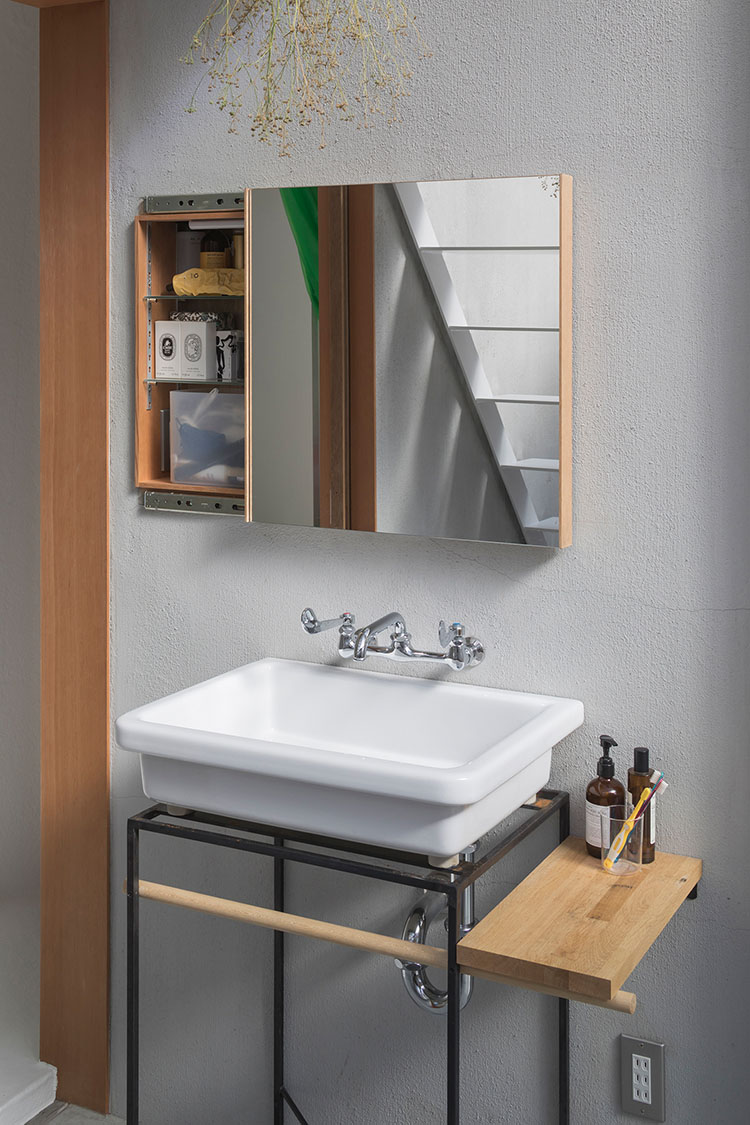