Australian practice Austin Maynard Architects has recently renovated and extended a dark and narrow single-storey terraced house in Melbourne‘s North Fitzroy suburb, Australia. Called Grant House, the new dwelling now features a hidden cellar, a central garden and a secret room in the roof. The old part of the house has been respectfully maintained and a new extension has been sleeved between original boundary walls. The new extension comprises kitchen/living/dining, with parent’s retreat upstairs. Utilizing the side laneway, the main entrance is now in the center of the house. A large and imposing galvanized steel door opens onto a light-flooded courtyard that separates the old house from the new addition.

In late 2014, the owners of Grant House decided to renovate their dark and poorly laid out terrace. Their brief focused predominantly on the living space – they wanted an entertaining zone that avoided the embarrassment of having to lead guests down a dark corridor, past bedrooms, a bathroom and through a dim, cluttered study. They shared the house with their teenage son and wanted have somewhere self-contained that was fun for him to live. Future-proofed to provide independence into adulthood. As a relocated Scot and an Englishman, the owners would often have family come over and stay for long periods, so adaptable space and privacy was paramount on this small block.

The house had been renovated sometime in the mid-1980s, with a typical long rectangular addition stuck on the back. The rooms were completely internalized and the floor plan convoluted, with entry and exit point that cut directly through rooms which lacked windows and fresh air. The old addition stretched to the boundary, with light sourced from (thermally weak) polycarbonate skylights. The 1980s renovation failed to solve the big problem terrace houses suffer from; an entryway filled with junk, dark corridors past private bedrooms and windowless walk-through living zones. In these instances, the challenges are always the same. How do you adapt the old layout to modern living? How do you get light and air into the home and make it sustainable? How can you make all this work within the spacial constraints of a terrace house on a long thin block? And, most importantly, how do you create a home full of joy, delight and warmth? 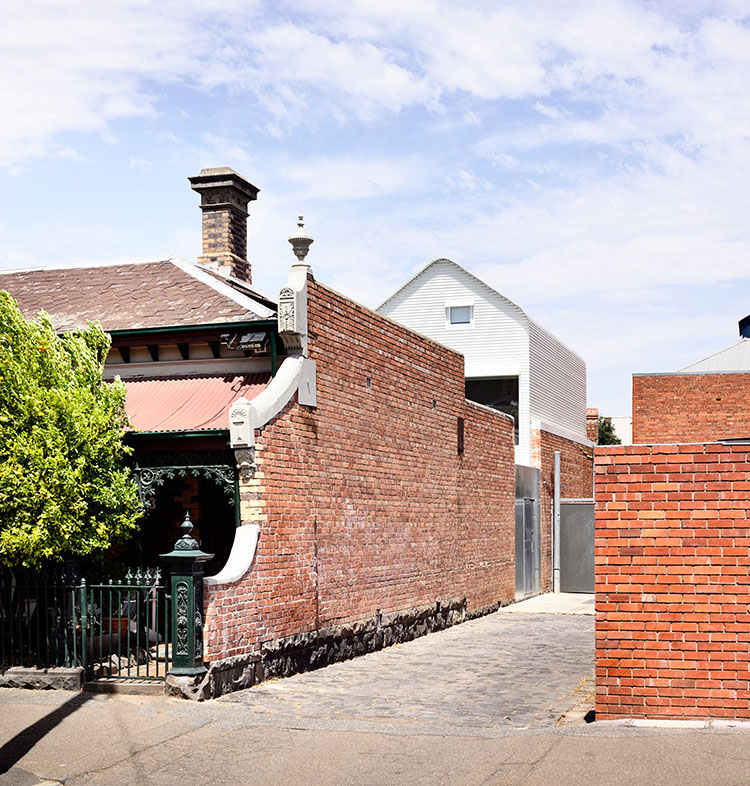 For the past fifteen years, Austin Maynard Architects have been successfully battling issues of inner-city living and the regeneration of aging building stock. AMA have learned how to deal with dark terraces with bad circulation and gained the experience and skills to address the challenges. Through development and experimentation, designs that are economic and imaginative have consistently been realized. 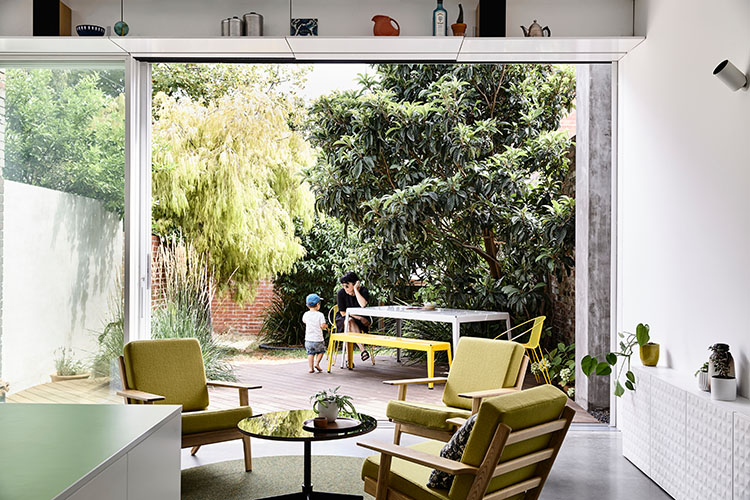 Though dealing with the same challenges, Grant House has a prime advantage –  laneway access. The bonus of a side laneway meant traditional terrace entry constraints could be subverted. Typically a dumping ground for bicycles, bags and bins, a narrow path leads from the front gate to the rear living space. In this case, moving the entry to the side allows the front to remain practical storage and the bedrooms to remain private, while the new entrance opens into a bright and welcoming living zone.

In rethinking the functionality of the house and how it is used, garden space has been protected and expanded. Reduction of the original footprint created more natural light, more garden and easier access. By stripping the 1980s extension, eight meters of brick wall was exposed and the character and history of an old sailing boat mural was discovered and celebrated.

Austin Maynard Architects are known for playful spaces. At Grant House both fun features and practical surprising elements were created. In the initial brief the owner asked for a basement. On a narrow site, stairs take up valuable floor area. A creative solution was to hide the entrance to the cellar in the floor, under the sliding island bench.  Like a train carriage, the storage section of the island bench rolls along tracks to extend the bench when the cellar is not in use, or nestle beneath when access is required. The cellar is completely hidden and secret, unless you are actually using it. A perforated aluminum sheet can be used over the entrance for safety and ventilation. In the old part of the house the teenagers’ bedroom took advantage of the high ceiling with a suspended platform bed space and a lounging net. Above the bed a hatch leads up to a secret ply-lined roof space, a whole secret room his parents will likely never visit. 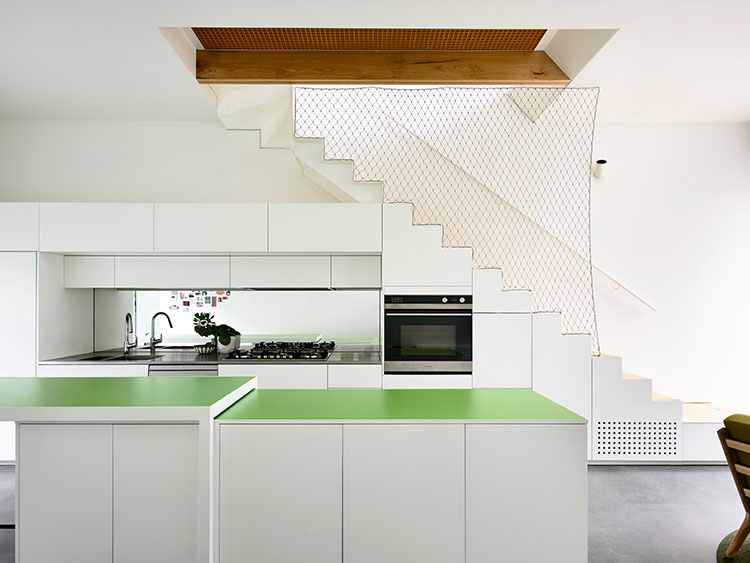 Deliberately imposing, the front door of Grant House sends a certain message – if you want to come in, you have to work for it. The owners had previously experienced a break-in, they were home when it happened, an incident which had helped informed the brief. Though they wanted to avoid making a fortress, they did not want a similar incident to happen again. The galvanized steel door creates safety and security but behind it lies a generous and calming garden – an embracing welcome home. The contrast between the two is stark and joyful. 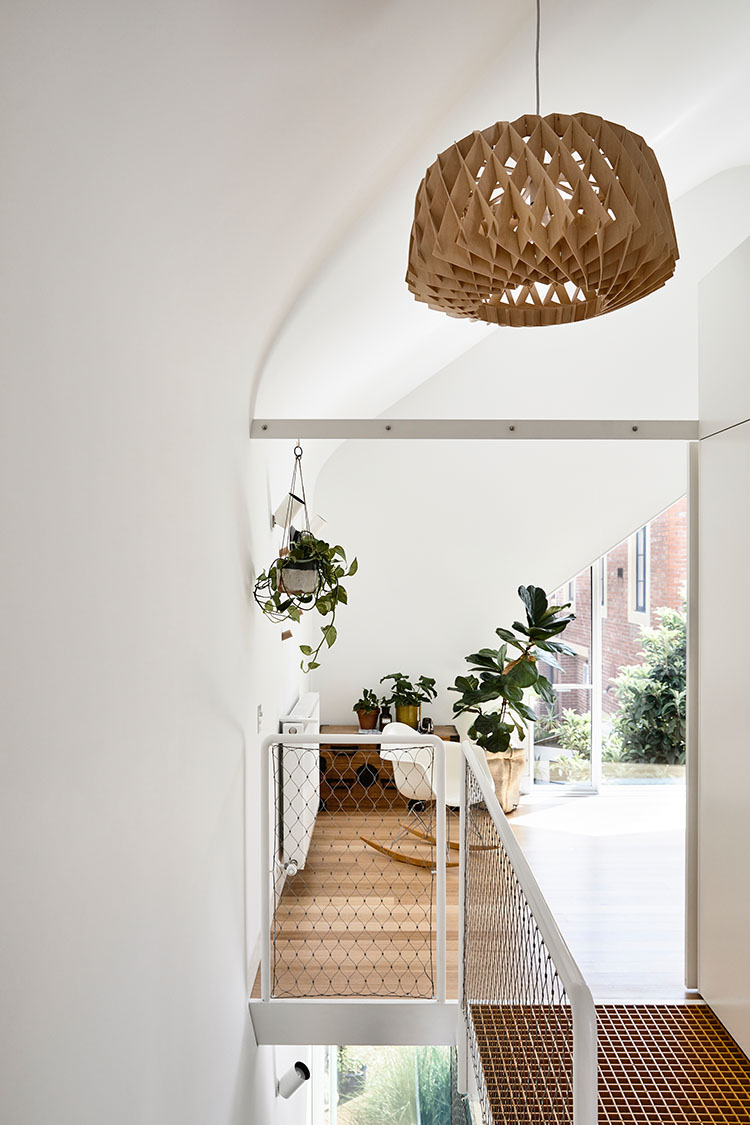 At Grant House, the owners’ teenage son occupies the front part of the terrace. In the future this can become a more independent space, as it has its own front door, bedroom, living and bathroom.  Upstairs the parents’ retreat is light-filled and open, with a bedroom at one side, a lounging area with a mezzanine reading platform at the other and a bathroom ‘box’ at the center.

Divisional walls stop short of the ceiling to create volume and height which celebrate the curve of the ceiling. The open layout is dedicated parents space, not enclosed and therefore used for relaxation rather than a place to store/hide stuff. Should needs change, or to maximize resale, the retreat can easily become two bedrooms and a bathroom with the use of strategically placed partitions.

The materials used externally in the new addition are robust and low maintenance. White cladding was selected to maximize solar reflectance, drastically reducing demands on mechanical cooling. Although the site is constrained in width, natural light and air to all spaces have been maximized. All windows are double-glazed and the thermal mass of the exposed slab is utilized in winter to store heat from the sun. Solar panels are installed on the roof of the old part of the house and a water tank harvests rainwater which is reused to flush toilets and water the garden. 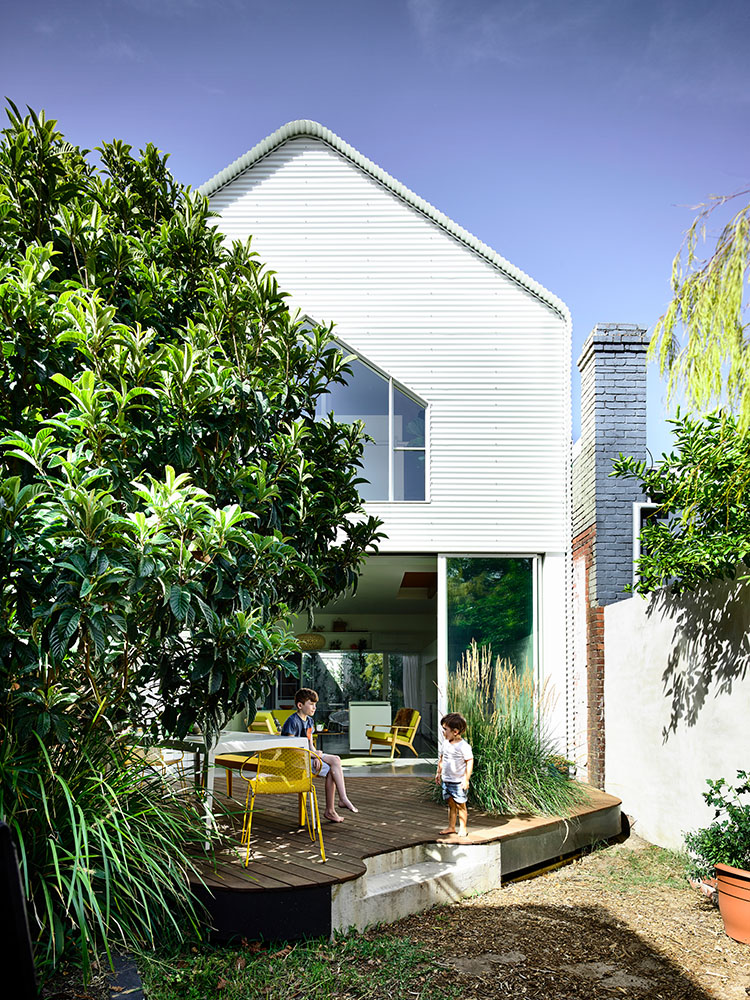 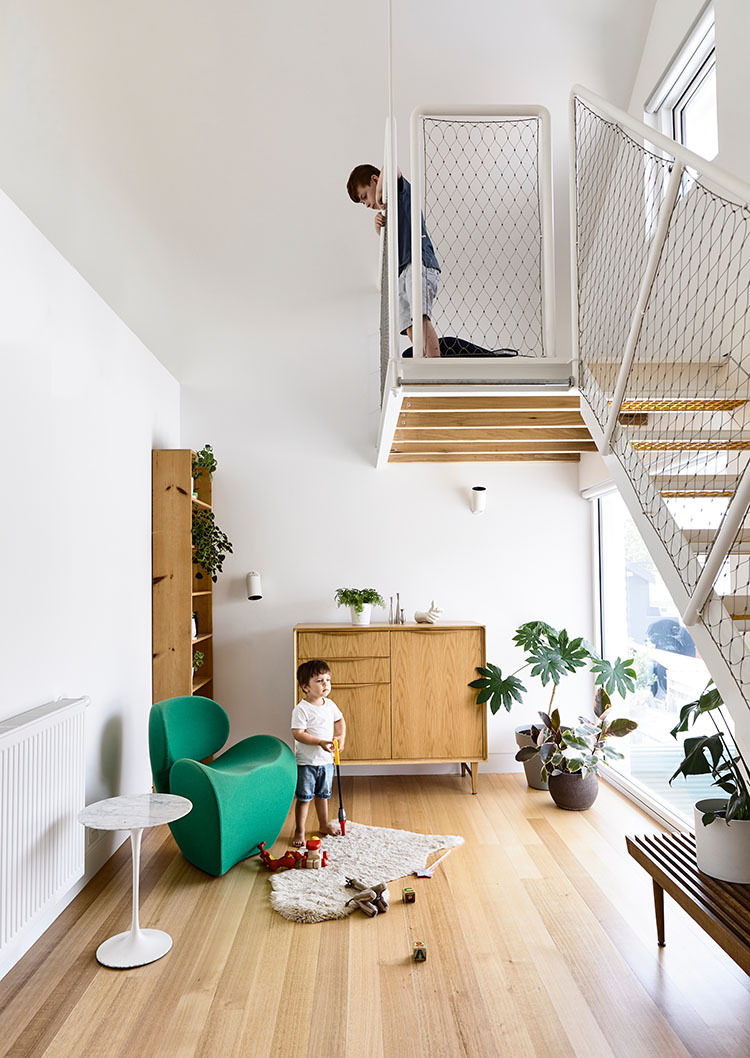 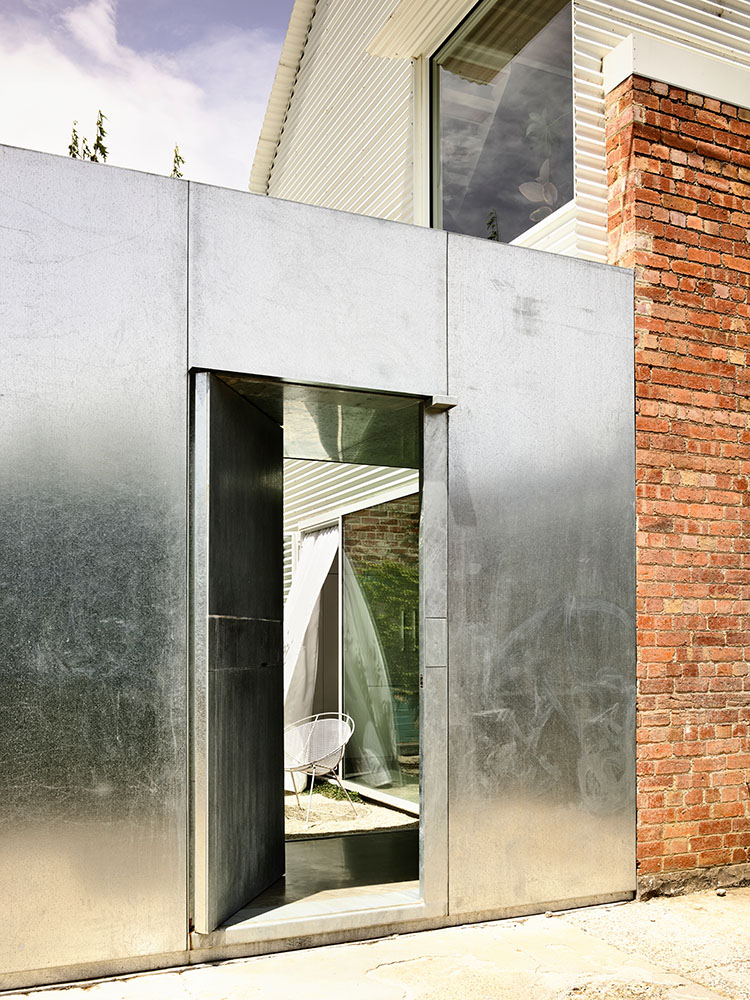 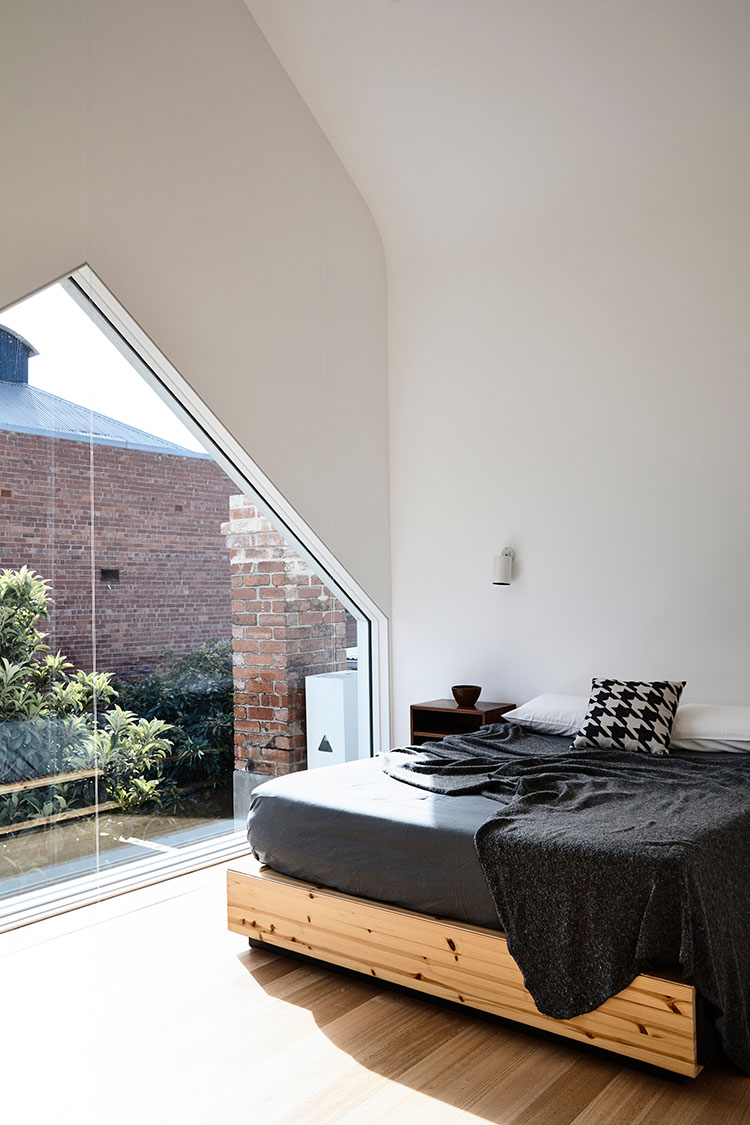 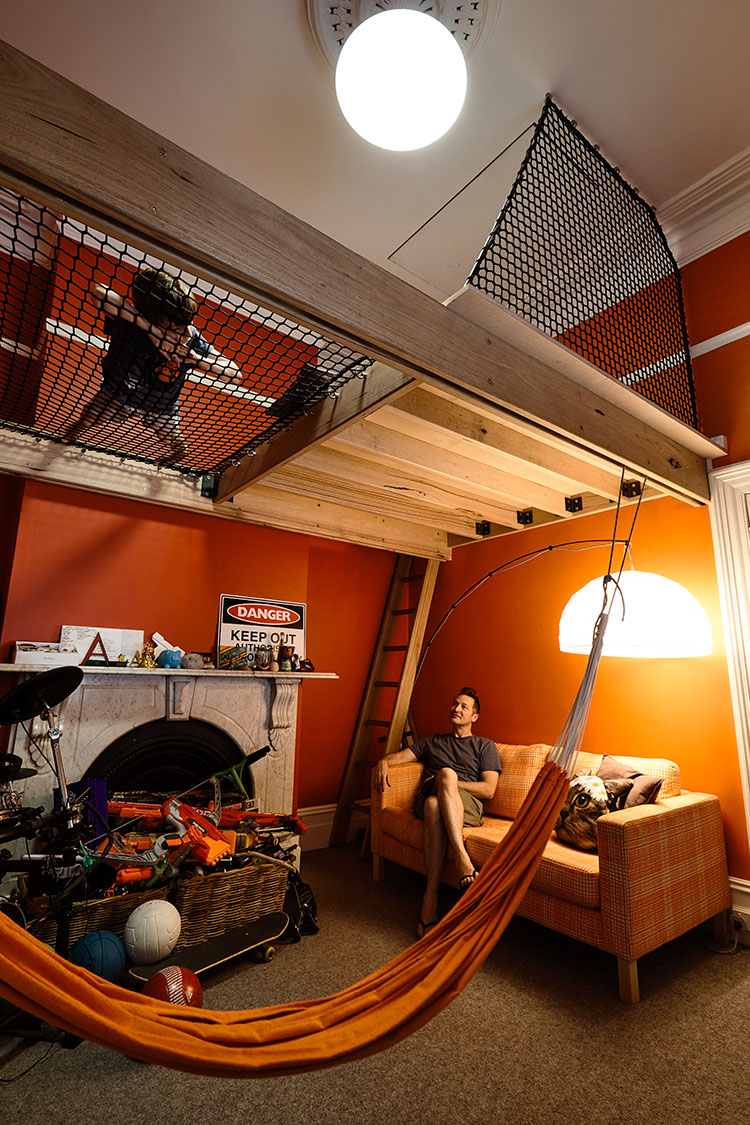 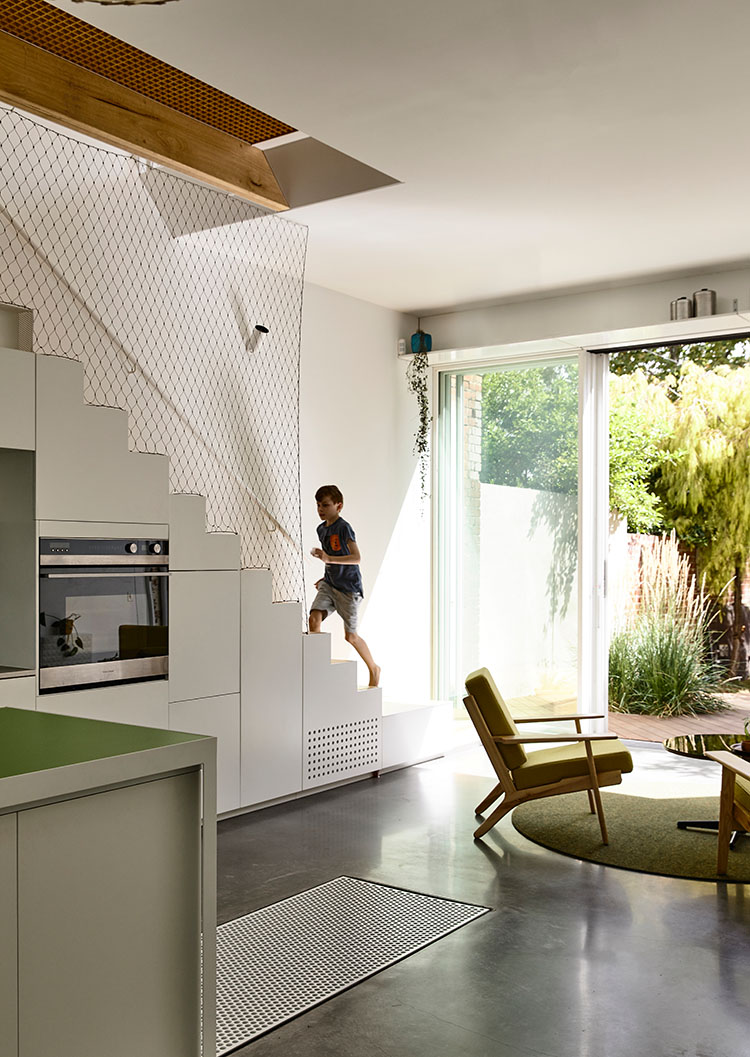 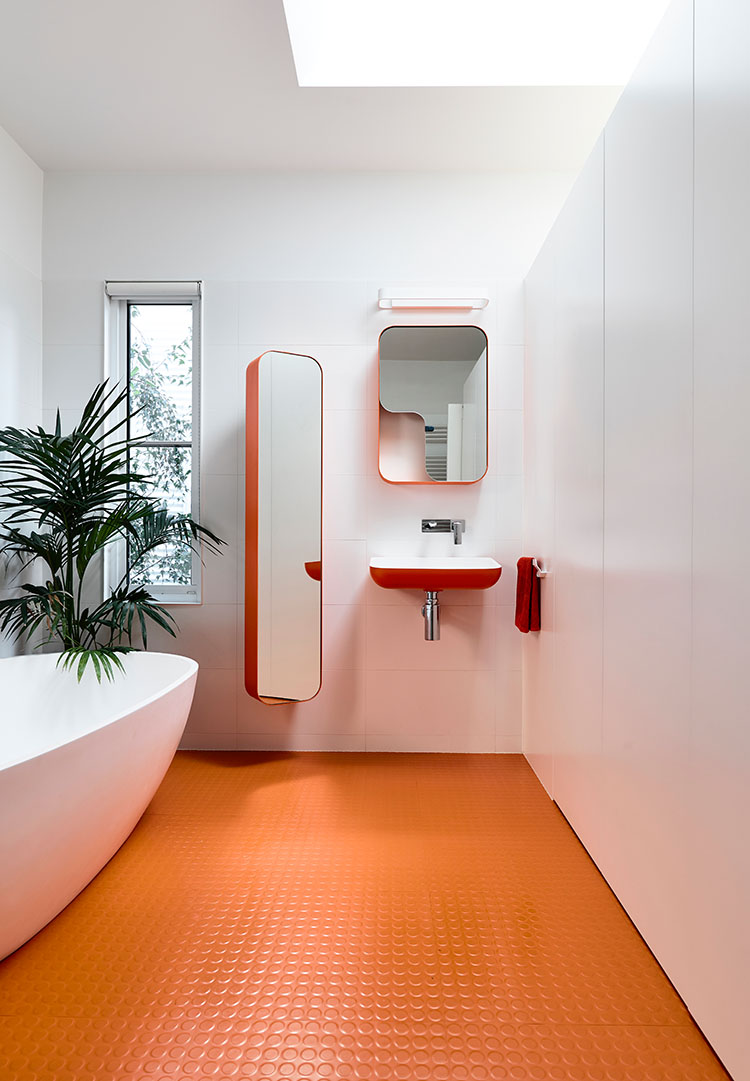