American architect Jennifer Bonner — who leads art and architecture studio MALL — has recently completed Haus Gables, a 2,200 square-foot single-family residence located in Atlanta, USA, who challenges notions of the domestic interior through materiality, color, and form. Haus Gables is one of only two residences in the country made of cross-laminated timber (CLT), an exceptionally strong wood material produced by gluing together layers of lumber that alternate in direction. 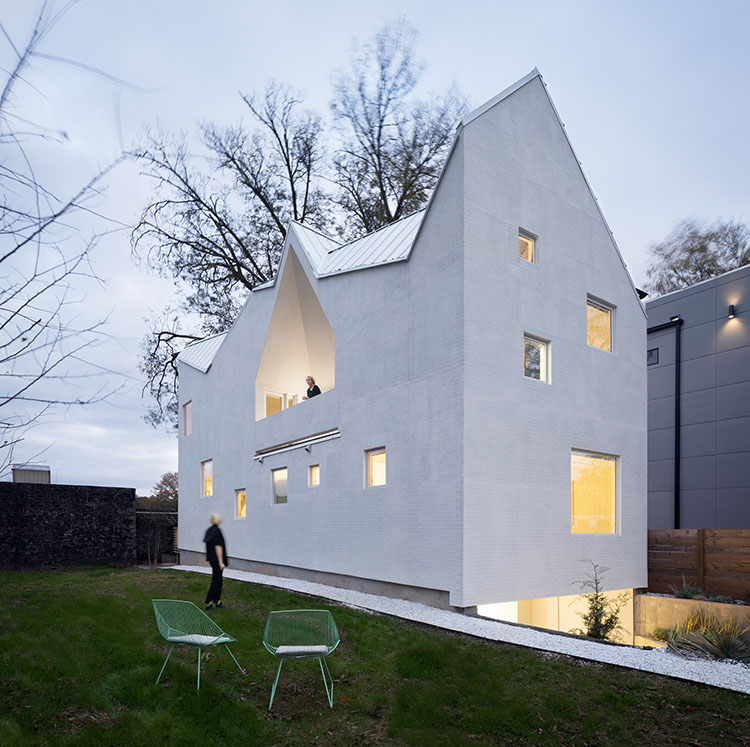 For this single family home adjacent to the Atlanta Beltline, a cluster of six gable roofs are combined to form a single roof. In an attempt to rework spatial paradigms of the past, such as Le Corbusier’s free plan and Aldof Loos’s raumplan, Bonner offers the roof plan as a way to organize architecture. Here, the roof plan establishes rooms, catwalks, and double height spaces in the interior by aligning these spaces to ridges and valleys in the roof above. In this case, the floor plan is a result of the roof. 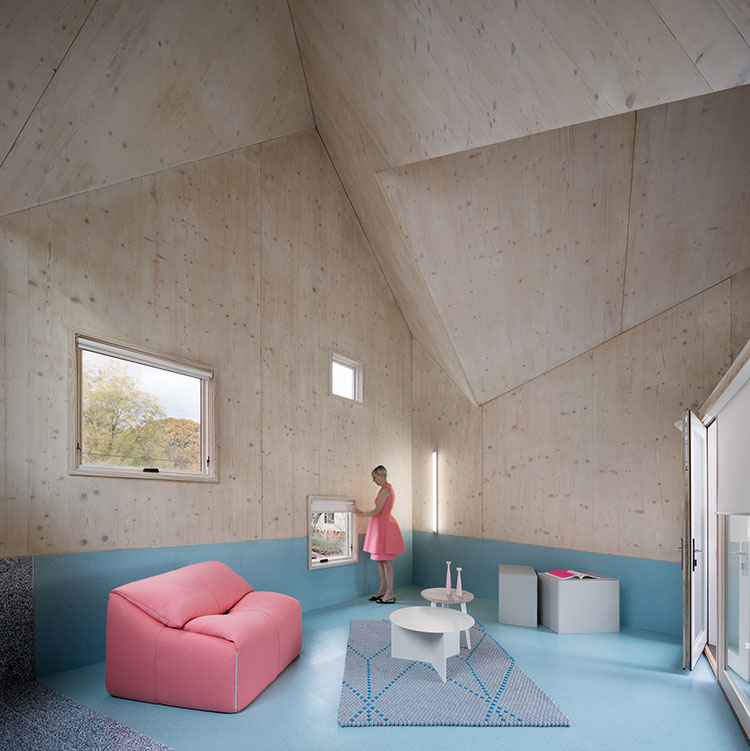 From a curb­side view, an asymmetrical and unfamiliar form replaces the traditional gable elevation house, as if the usual form were clipped. Strange profiles emerge on all four elevations as the six gable roofs are cut at the perimeter’s massing. Other slight alterations to the ordinary include roof pitches which are much steeper than those found in industry standards. The house, which sits on a 24­foot wide plot, has a width of 18 feet, the same size as a single wide mobile home. The uncharacteristically slim home generates ideas for the applicability of the roof plan to denser urban environments. 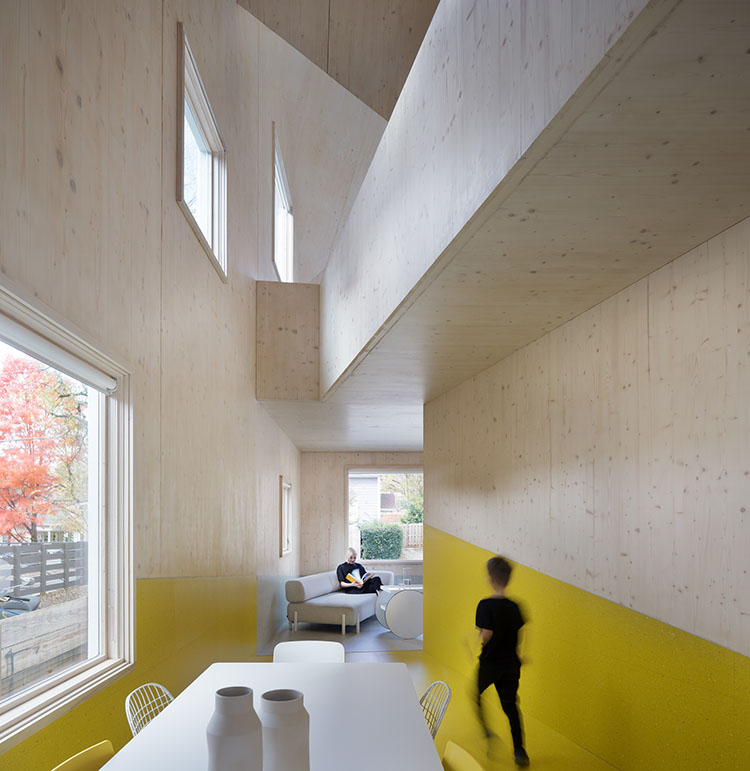 All exterior and interior walls, floors, and roof are made of solid CLT panels, a material widely used in construction overseas but is new to the US market. Custom Cut, hoisted into place, and assembled in fourteen days’ time, the CLT in Haus Gables enables a solid house that eschews stick frame construction. Structurally inventive, the panels also promote a monolithic view of the material from the domestic interior. 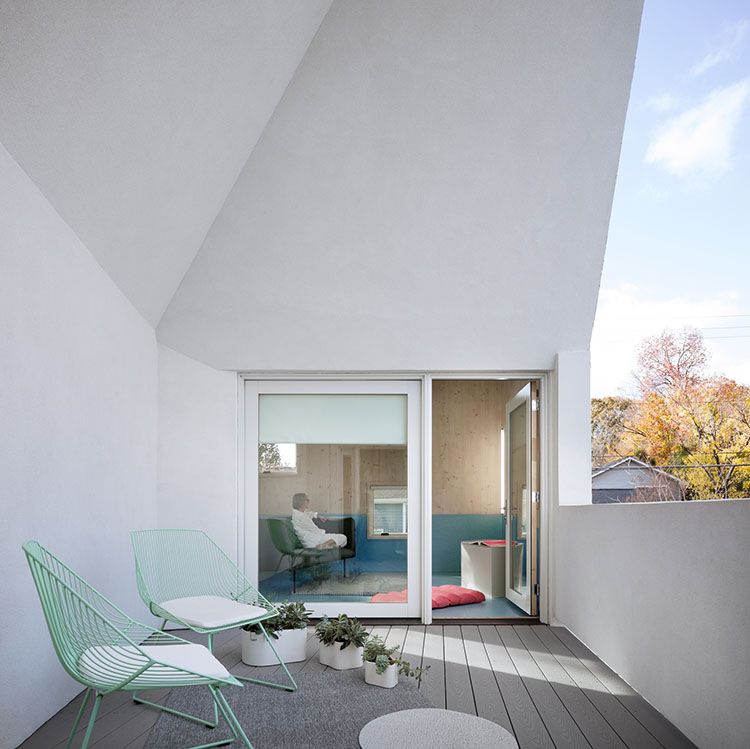 Haus Gables further engages in the conceptual exploration of materiality through a series of faux finishes that clad the exterior and parts of the interior. Bonner reworks the old tradition of faux finishing in the American South, historically stemming from an inability to afford precious materials and the subsequent desire to “fake it,” as well as utilizes a more contemporary technique of “color blocking” currently found in pop culture. 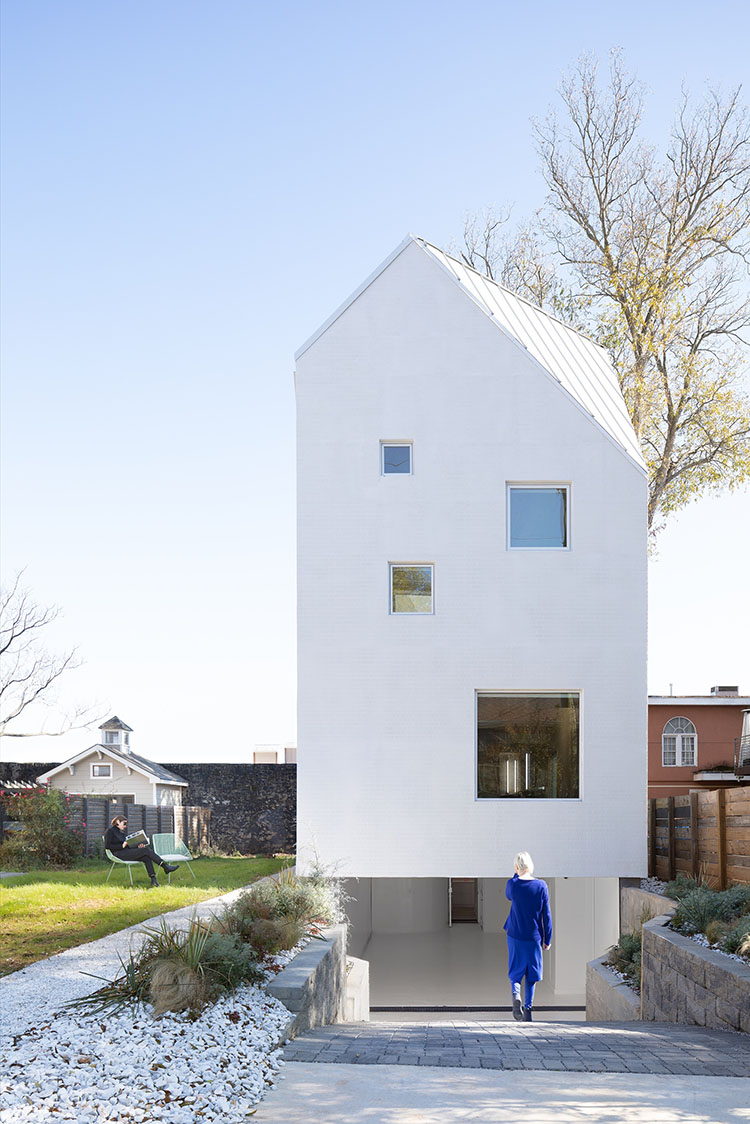 On the exterior, two sides of the house are covered in faux bricks made of stucco dash­­ finish of glass beads that produces a glittery effect. Inside, black terrazzo is not poured in place and polished, but applied as a thin tile, while oriented strand board (OSB) is replaced by ceramic tiles in the image of OSB. Marble finishes in the bedroom and adjacent bathroom are made of unlikely materials, including vinyl and cartoonish drawings, rather than the oft-desired, real Italian marble. Areas of grey concrete, yellow vinyl marble, and black terrazzo line some walls much like wainscoting, with several long views through the house allowing for a color block effect. These faux finishes seem to indicate spatial divisions, when in reality they do not correspond to the actual boundaries of any room. 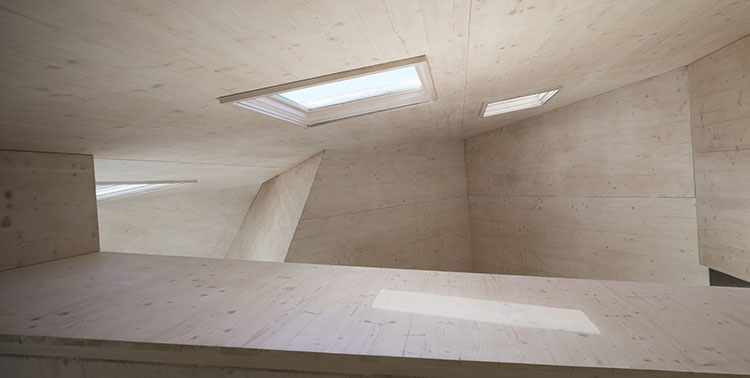 The interior is further activated by a range of furnishings from female designers who boldly utilize material, form, and color in their work. With the use of unconventional materials and an unusual roof design, Haus Gables is an exploration of new ways that spatial organization, form, and material might function in a home. 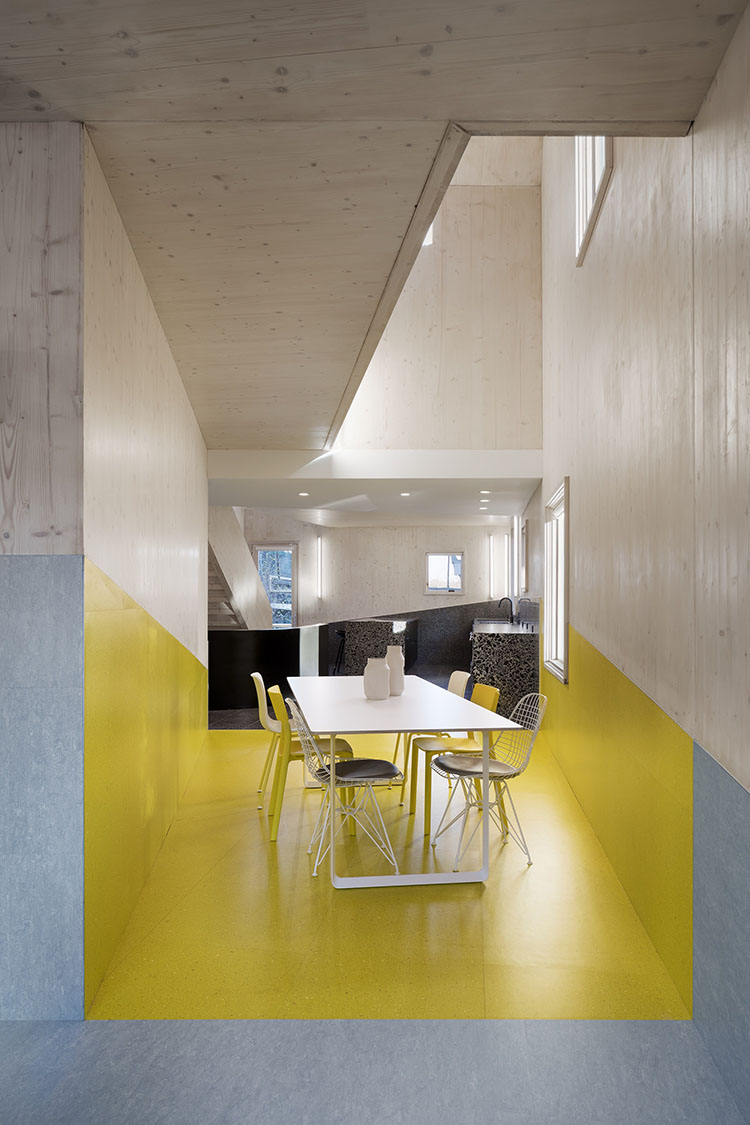 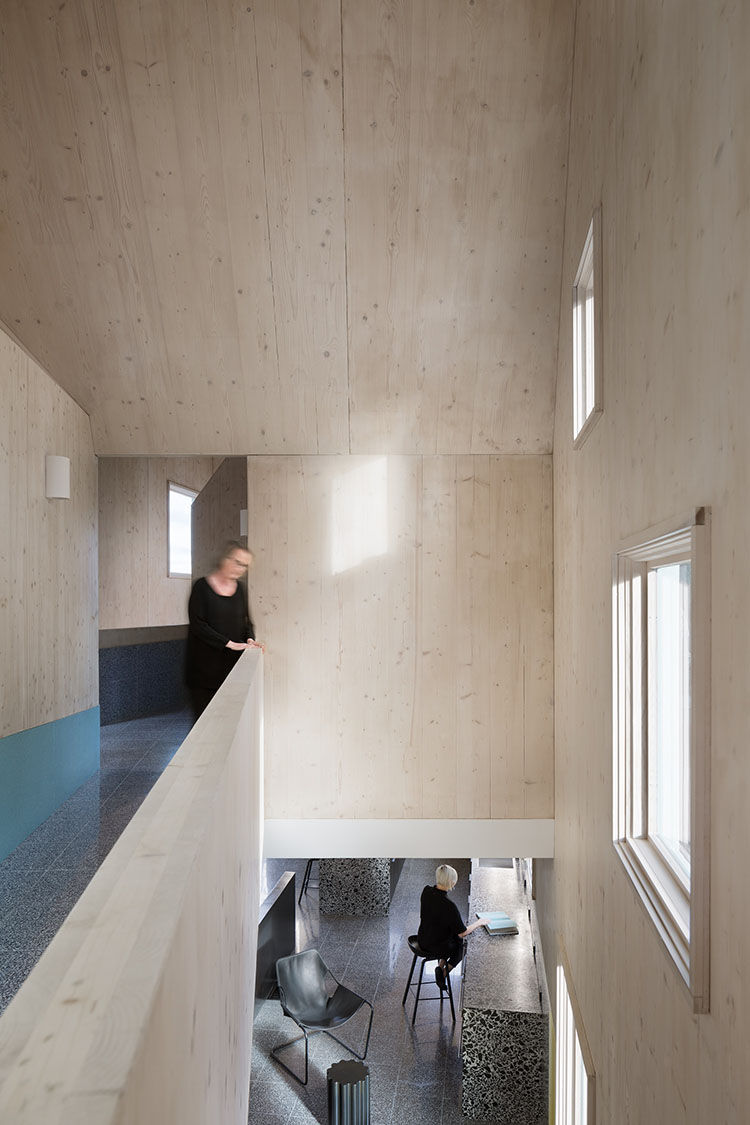 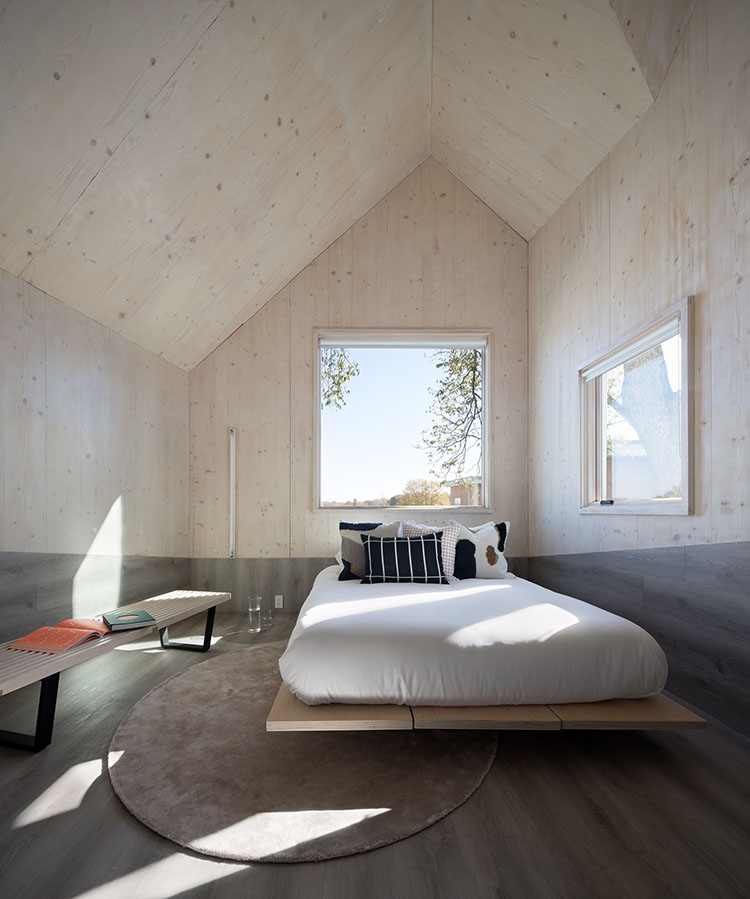 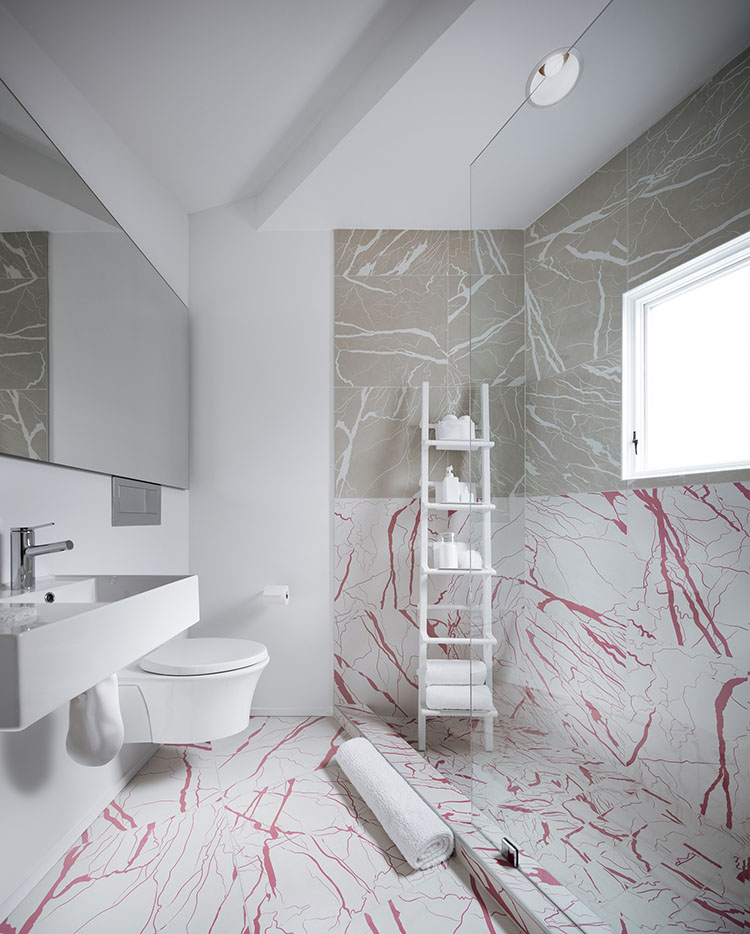 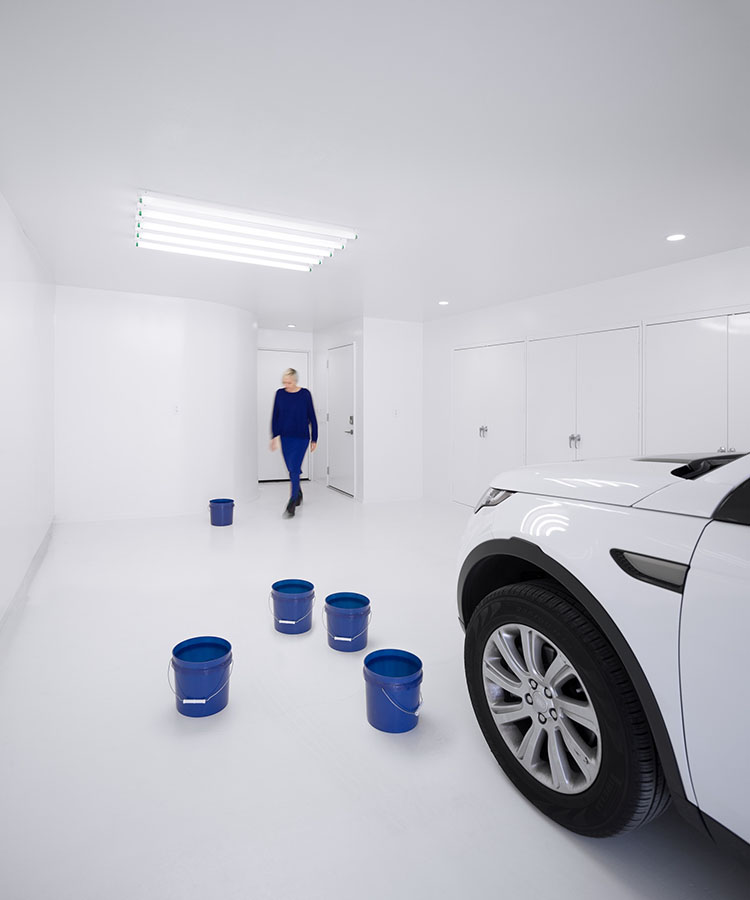