At the foot of the Sciliar, in the picturesque area of Alpe di Siusi, Bolzano, the spirit of a barn is reborn as a home. The project, realized by noa* (network of architecture), has at its core, the South Tyrolean tradition combined with surprising features internally, resulting from design of visionary and unexpected spaces. An almost magical ambiance is created, inspired by childhood memories. 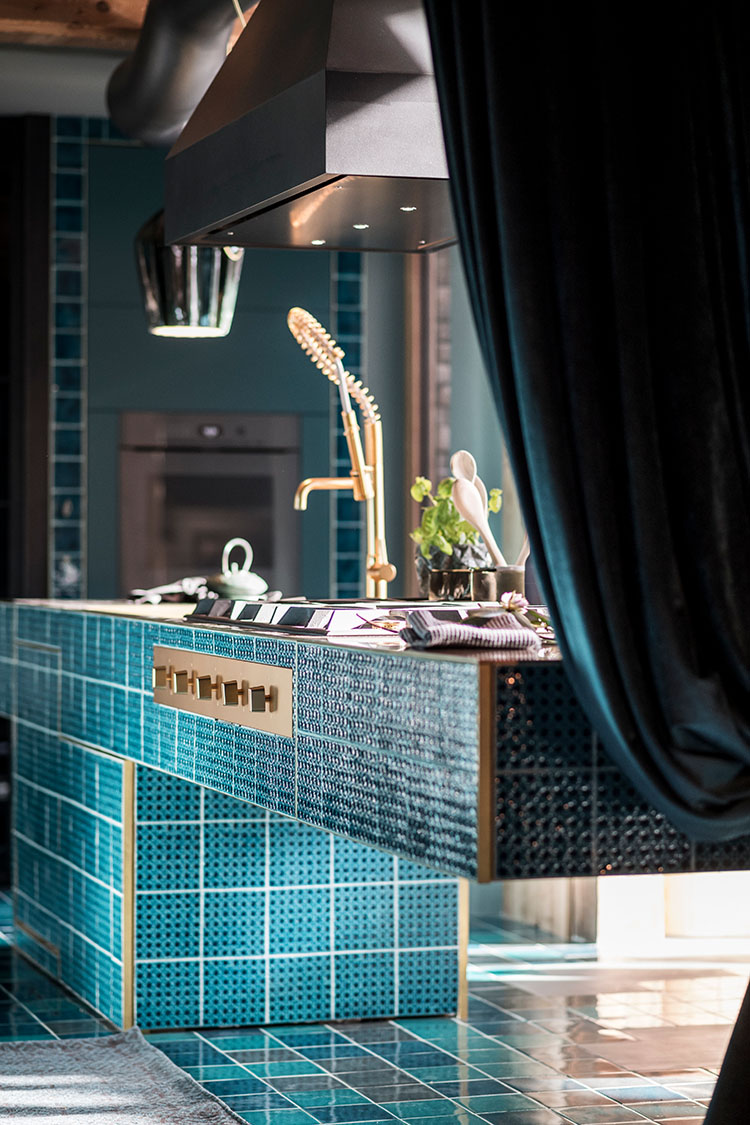 Keep tradition in mind, but at the same time move away so as to create an original identity, a new way of living, a different structuring of the domestic space, and to search inspiration from a childhood passed in the mountains. This, in summary, was the challenge faced by noa* in the project to construct a new home at Siusi in Sciliar, a construction to take the place of a deserted house in the centre of the village, with the original structure dating back to 1850. 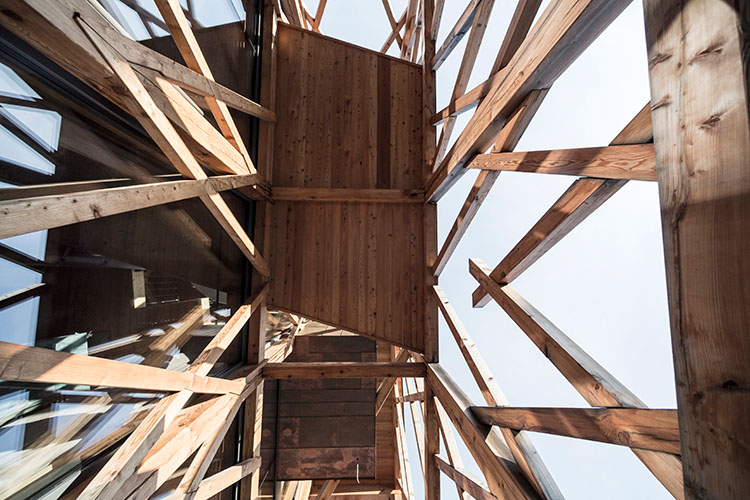 The job, completed in 2017, needs to be understood in its complex and delicate context. We are talking about South Tyrol, and a project executed at a height of 1100 a.s.l. at the foot of Alpe di Siusi, a part of the Dolomites recognized as a Unesco World Heritage due to its outstanding natural beauty. It was therefore extremely important to respect the parameters of the original structure and the urban planning requirements and regulations of the village. 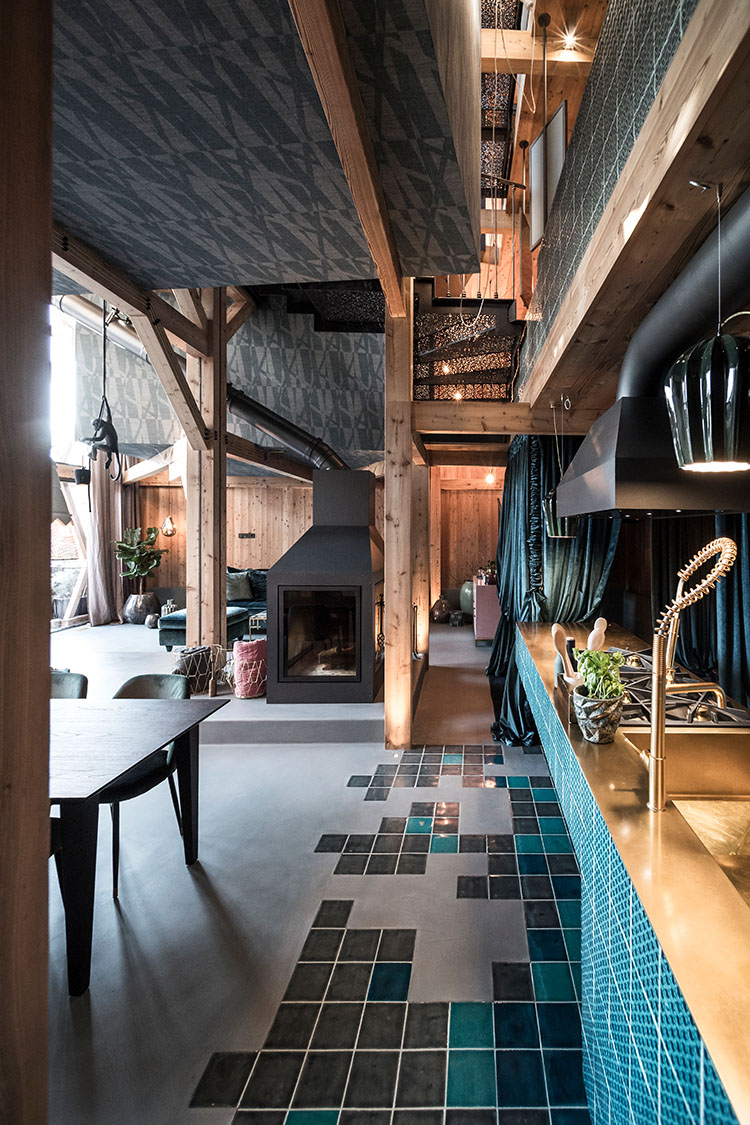 For Stefan Rier, founder, together with Lukas Rungger of the noa* studio, and in this instance ‘his own client’, the project was an opportunity to give a personal footprint to his own property. In this sense there was a move away from the traditional principles of spatial distribution, this being achieved in part by recalling memories of a childhood spent in the mountains. 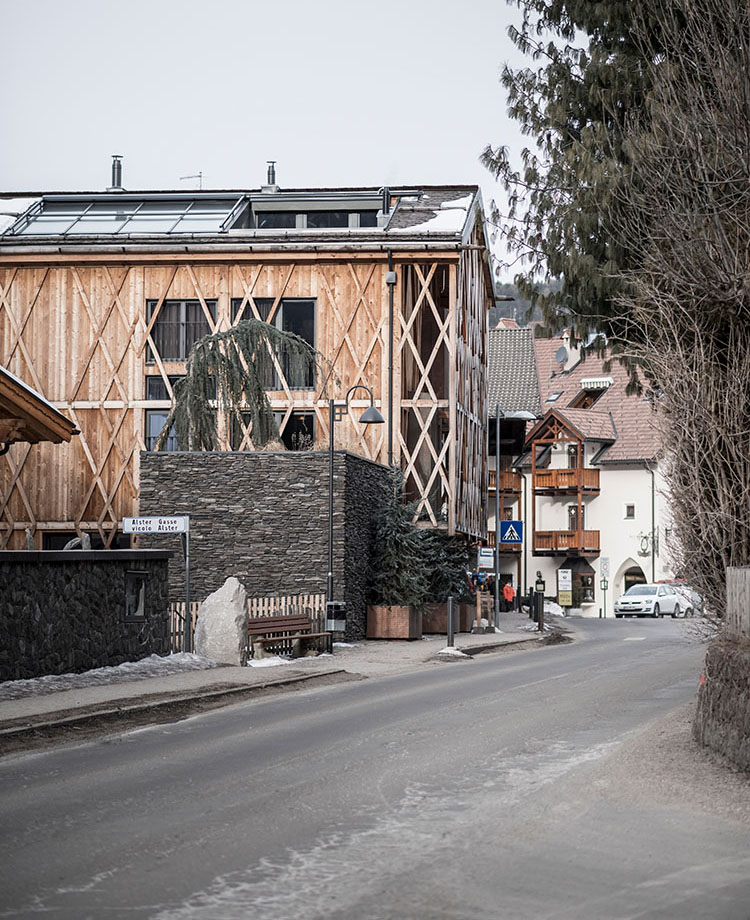 “We wanted the project to respect the aesthetics and the urban aspects of the village, a village where wooden barns alternate with plaster-fronted houses destined for farmers and the keeping of cattle,” explains architect Rier. “With this in mind, we finished the exterior structure with a ‘coating’ in keeping with tradition: a wooden grid on all 4 sides, just as is used for alpine barns. However, as far as the interior is concerned, I decided to leave tradition behind me, and thereby free the design from any preconceived limitations. In this way I was able to look forward…but also a little back in time to the beautiful years of my childhood.” 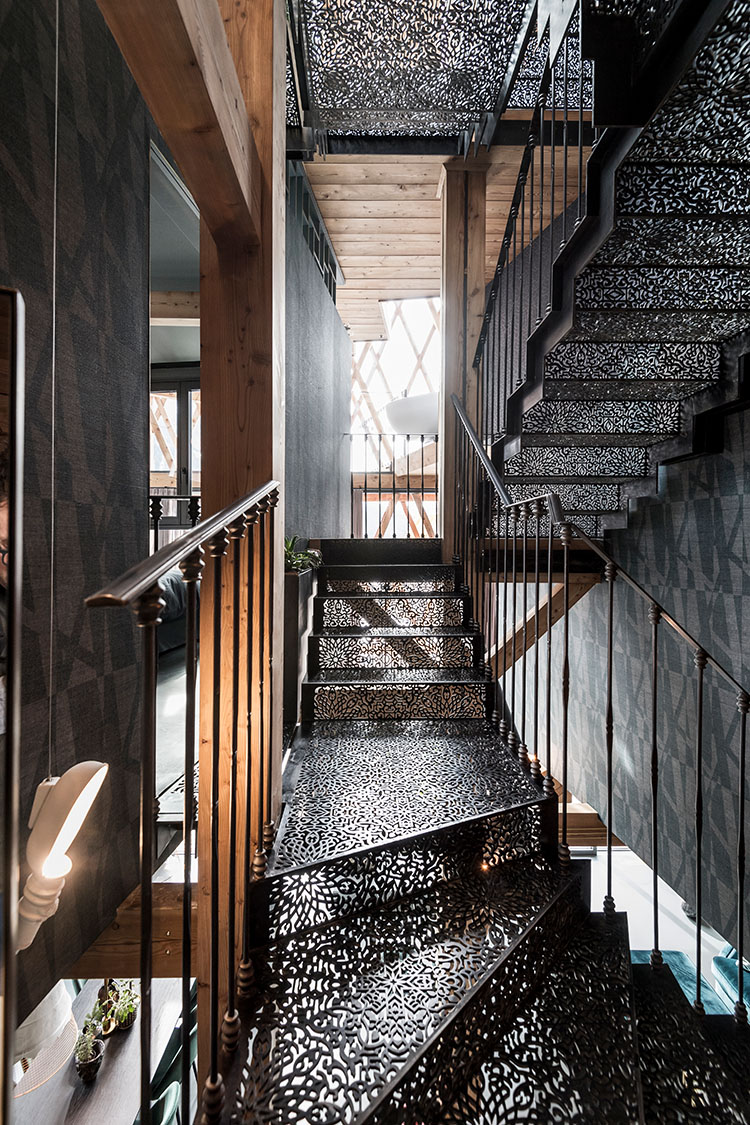 The outcome of the project is a dwelling, having two aspects which confront each other in their style. The exterior represents the traditional alpine location, splendidly immersed in the local topography, whilst the interior boasts the visionary impulse, the surprise of a space freed from the general scheme of things, almost permeable, osmotic, and certainly innovative. 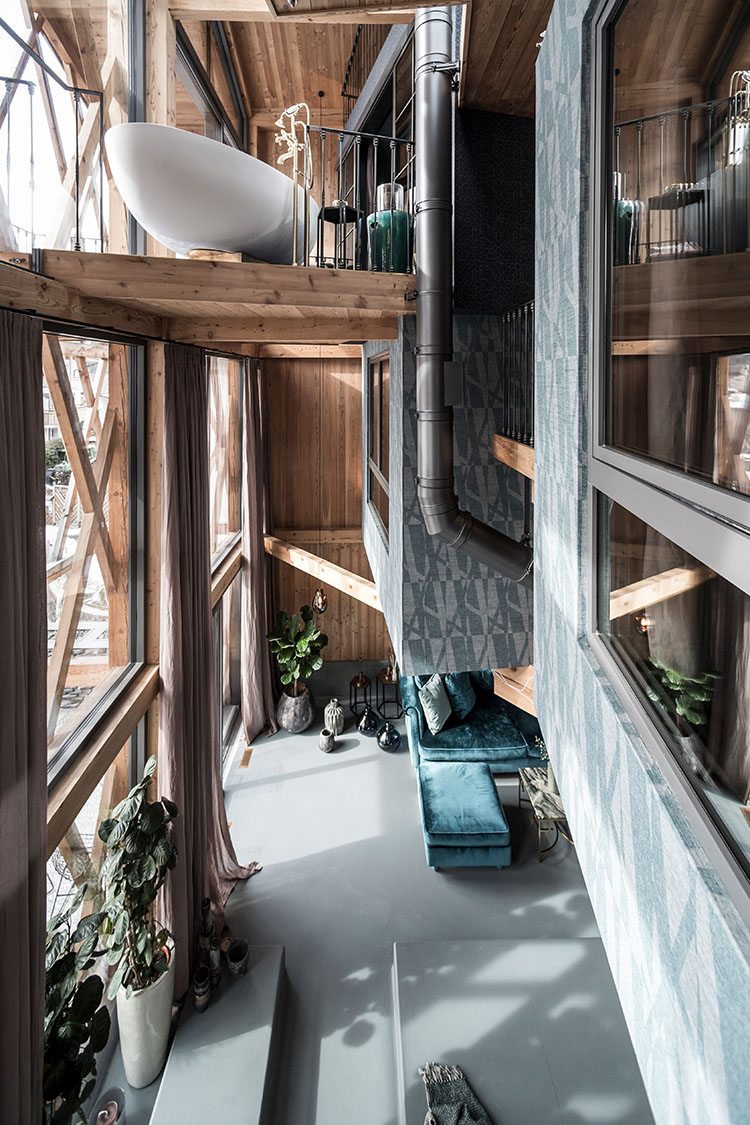 On the ground floor, there is a common area which spreads out almost in a ‘piazza’ fashion for (habitational) and interactional use: there is a dining table to enjoy with friends, an ample sized kitchen to accommodate more than one cook! The rest of the house develops in a vertical way and instead of the classical room division there are what can be described as ‘hanging boxes’, which are positioned at different heights and interconnected by stairs and walkways – they giving the sensation of walking up a mountain path towards the peak. 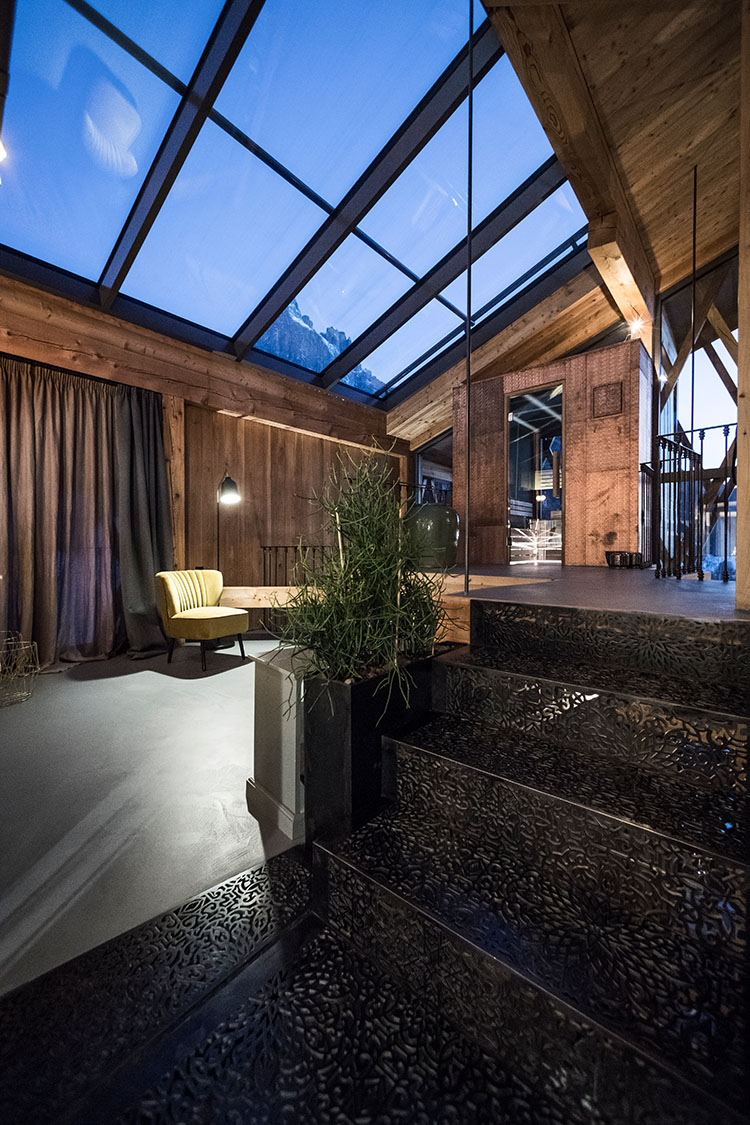 The hallways are carefully designed so that, apart from their connecting function, they accommodate other essential areas such as the library and open ‘bathroom’ areas with tubs and showers (only the WC are closed in). The entire structure is conceived in a way that the further one goes up the level of privacy and intimacy is heightened. The highest ‘box’ which features a sauna opens out to the splendid view of the Santner mountain. 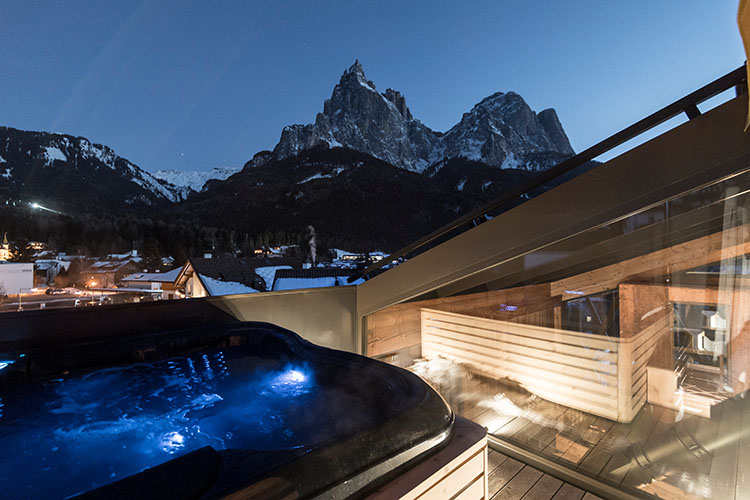 The revolutionary distribution of the interior spaces can be noted also from the exterior, and a sort of counterpoint is created with the traditional presentation of the exterior itself. To the north, the two boxes of the bedrooms, finished in bronze, can be seen behind the wooden trellis shell, and as a result, the material contrast is evident, while to the south it is sauna box which protrudes the glass facade. 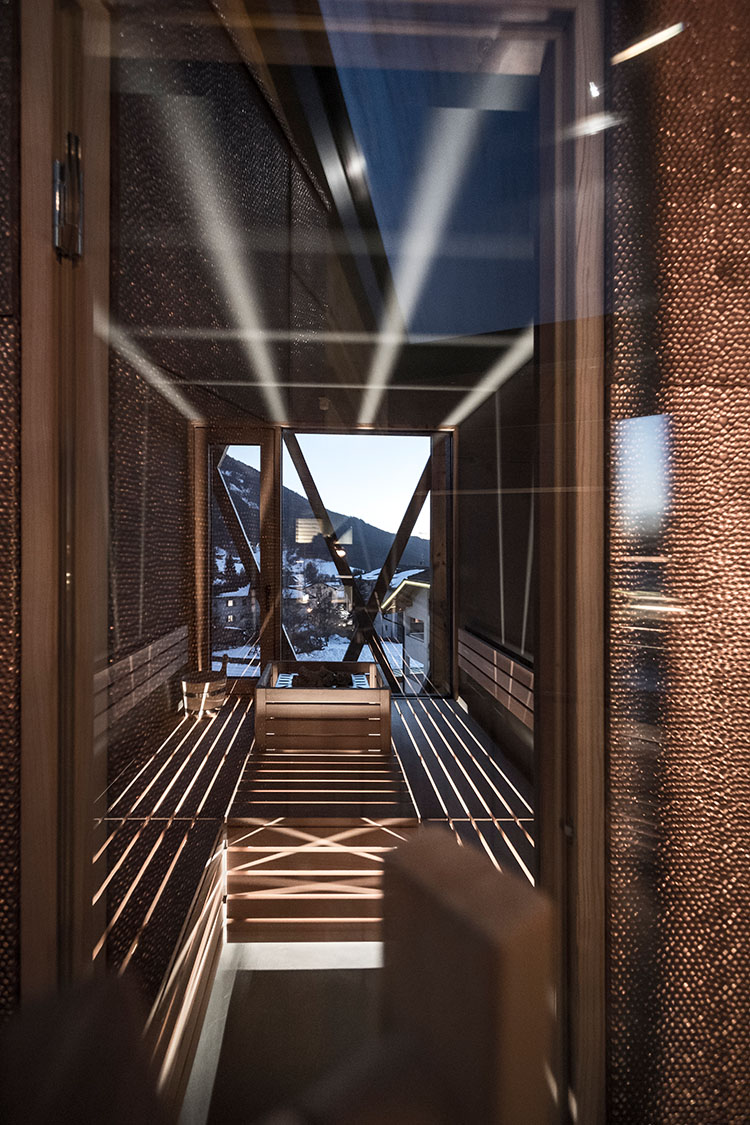 It is an architectural concept, both extremely innovative and courageous in nature, but which also has the value of being able to evoke an atmosphere of time past. Viewing the structure from a distance, the larch framework which supports the hanging boxes with its roof supported by 12 meter high wooden columns, seems to be the outline of an old barn.

“Thinking about it, I spent a lot of my childhood playing in barns,” underlines Stefan Rier, “and one of my lasting and favorite memories is of when I used to climb high up in the barns and then throw myself down into the hay. Maybe if I had not had that experience, I would never have come to design this house …”