The first part of the long-awaited revitalization of the Prague riverfront area called Náplavka is coming to completion, making it one of the most attractive public embankments in Europe. In autumn 2019, nineteen vaults on the Rašín and Hořejší Embankments will be put into use. Six will feature the biggest elliptical pivoting windows in the world, connecting the inner spaces with the riverfront area in a unique way, through the diagonal rotation of the five-meter wide glazed “lenses”. The other spaces will have distinct steel sculptural entrances. 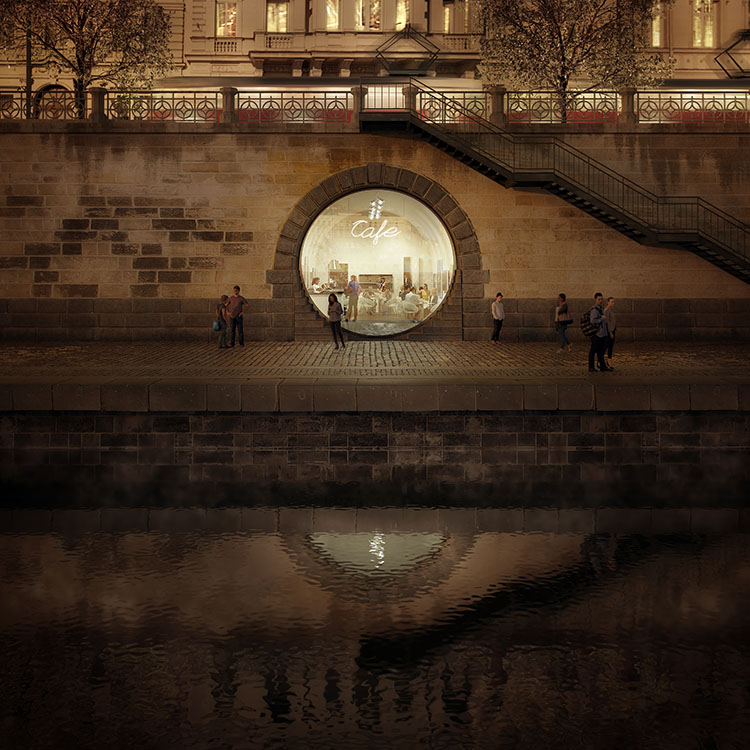 The area has gradually grown in popularity thanks to the program activation that began in 2008. One of its initiators was architect Petr Janda, the author of the architectural concept. The almost deserted riverfront area, which was also used as a car park after the floods of 2002, began to emerge as a cultural and social area and one of the most popular public spaces in Prague. With the arrival of other activities (the bike asylum Bajkazyl, (A)VOID Gallery, farmers’ market, the Forman brothers’ theatre ship Tajemství), it has become established as an authentic cultural centre, interconnecting time spent along the river with exhibitions, concerts and theatre performances. 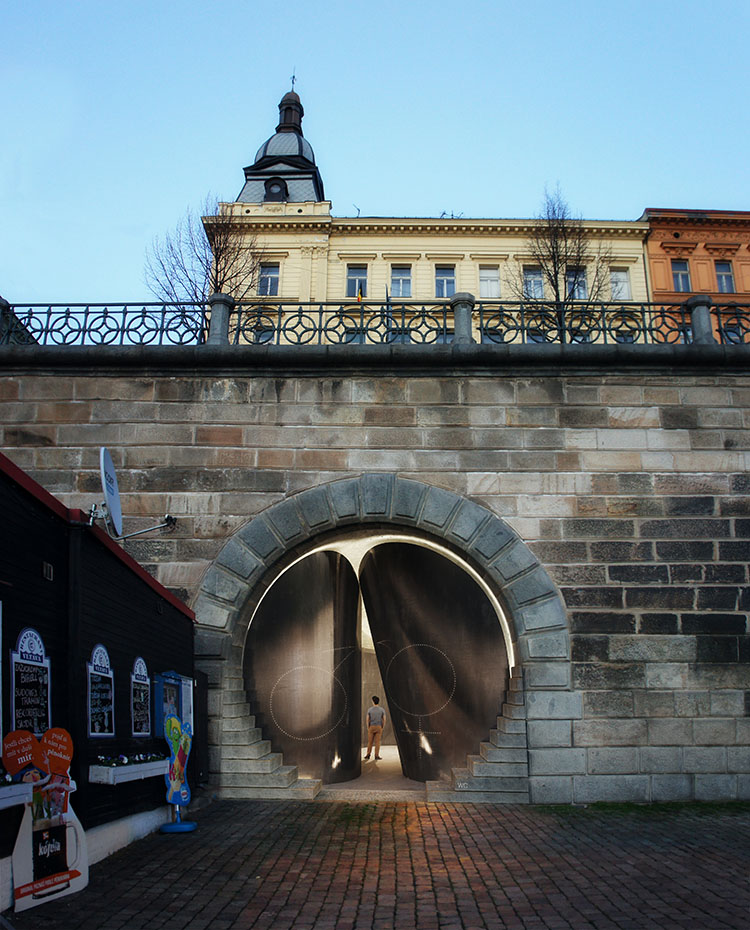 The masterplan of the Prague riverfront area includes a number of architectural interventions that will gradually encompass the vast riverfront area stretching along the three Prague embankments, almost 4 km in length. It is envisioned as a consistent whole, comprising a balanced architectural framework, established cultural and social content, and other program layers, as well as variable elements such as floating facilities, temporary installations and events. The stone part of the design is based on the vaults in the riverside wall; the floating part, on the large floating facilities (boat terminals, floating baths and floating toilets). They are all designed by the petrjanda/brainworkstudio and create a consistent set that will identify the riverfront embankments. 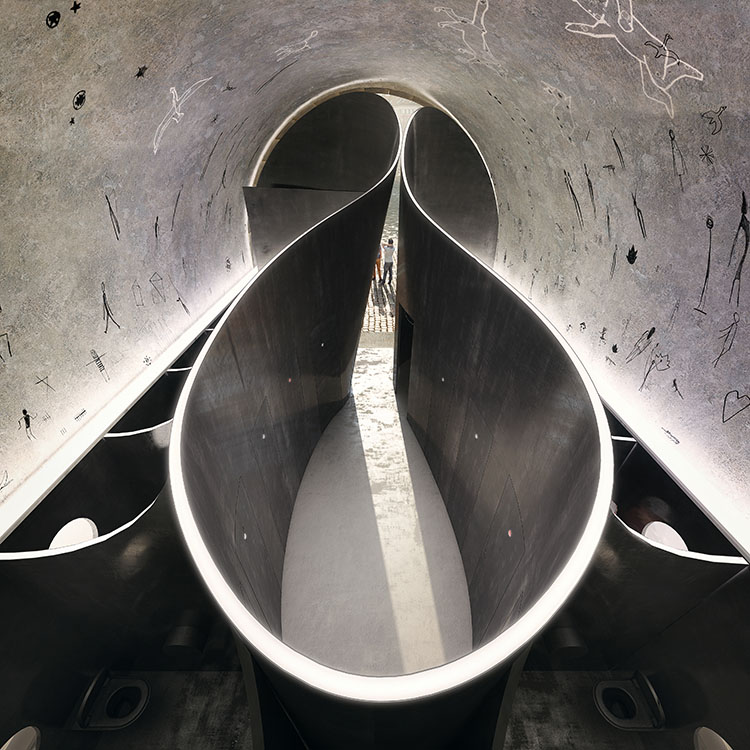 The floating facilities are being prepared for implementation in the coming years. Having a very authentic and strong visual concept, they merge with the riverfront environment and do not obstruct the view of the river. Together with the vaults, they will become a very specific and beautiful architectural masterpiece, based on mutual interconnection between the old genius loci and the future spirit of Prague’s renowned riverfront. 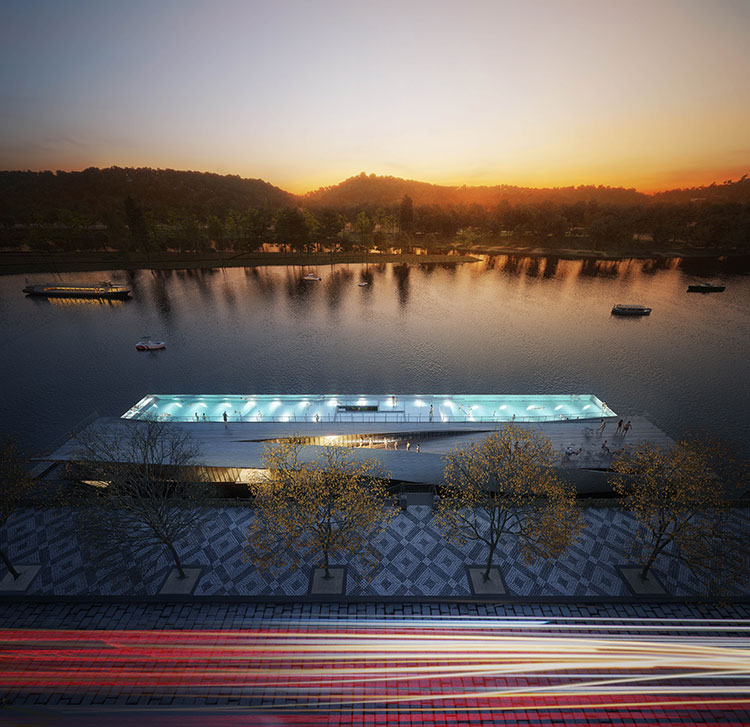 The aim of the project is to restore the tradition of river baths through a modern badeschiff-type floating pool with complementary facilities complying with contemporary requirements. Floating public baths combine general social and cultural functions with recreational and sports functions. The location of the baths echoes the historical placement of swimming pools along the Vltava embankment, with their specific connection to the Rašín embankment. 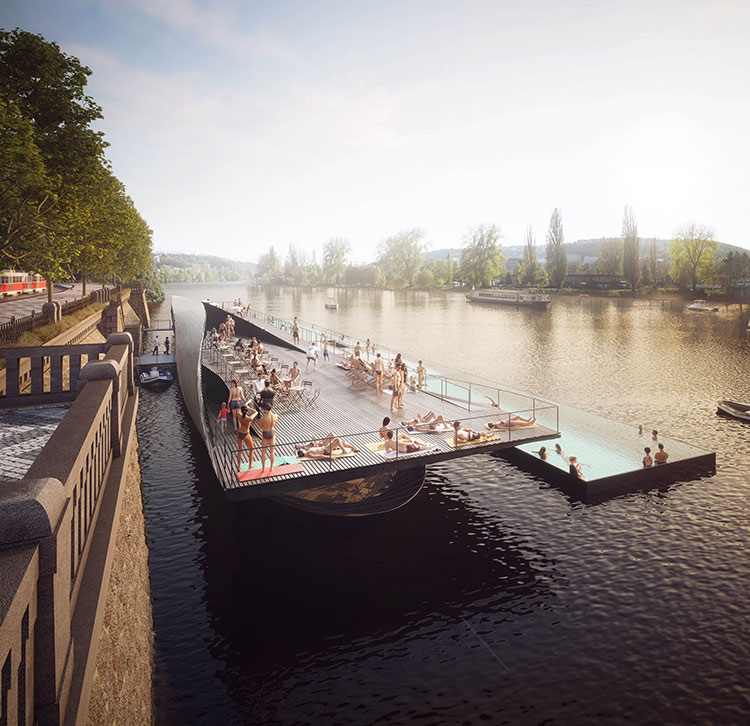 The project is based on the morphology of the embankment and defines the position of the floating facility among the existing bays along the high waterfront wall. The baths are composed of two architecturally different parts, creating a coherent whole. The swimming pool belongs to the river “realm”, while the floating facility follows the character of the high waterfront wall and the historical appearance of Prague’s traditional floating river baths. This tension is complemented by a third layer, concealed in the below-deck interior: a structural system of steel ribs, the traditional structural component of all boats on the Vltava river. 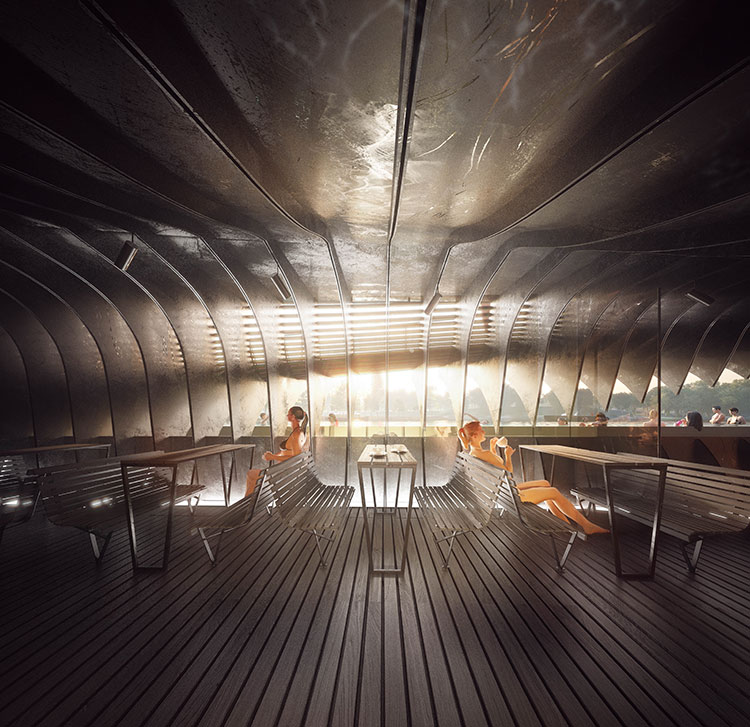 The floating facility is designed around the transformation of a cargo ship (type VČ 900 Petra), by reducing its existing superstructure and adding a new part connected to the ship’s system of existing ribs. The pool appears boundless, thanks to its infinite water surface, but offers a variety of depth levels suitable for different types of swimming, activities and user groups (with a maximum depth of 1.5m). At the water surface level, the pool is divided into three parts by troughs. These three parts can be distinguished by different water temperatures, used throughout the year, and adapted to different needs (the pool is designed for year-round operation). The individual parts are designed for children and non-swimmers (paddling, shallow depths), with a relaxation area with gargoyles and underwater elements in the central part of the pool, and for swimmers, with benches along both sides of the pool. 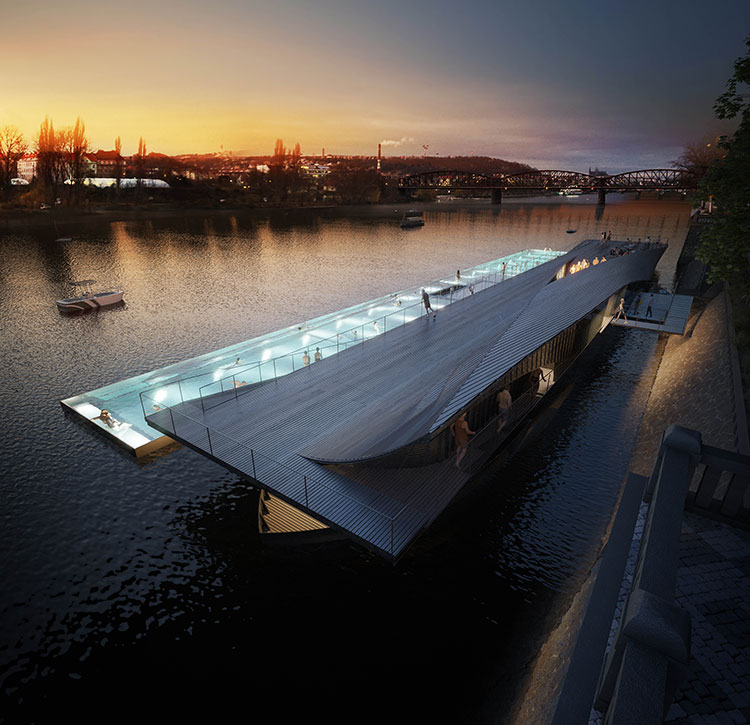 The main idea of the project is to create a central terminal for cruise boats with the required facilities, while achieving the benefit of opening the view from the river bank in the area between the Palacký and Jiráskův bridges. By its nature, the terminal is an intersection between the bank and the river, an amphibious being that belongs to neither the ground nor the water, a distinctive extension of the river bank, and itself, a transformed boat. By clearing the waterfront and concentrating boats in one place, the terminal brings an important quality to the area, redefining existing relationships. 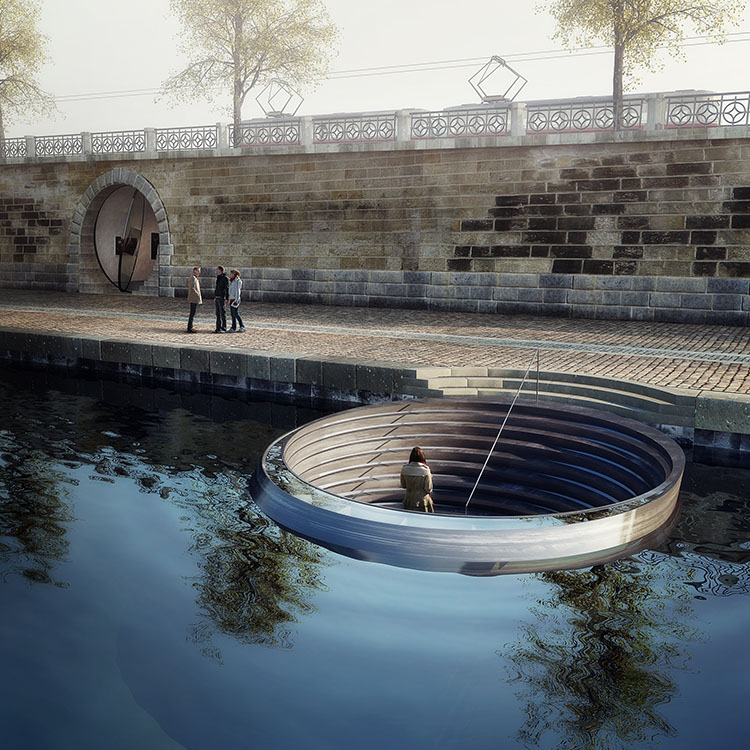 Project’s design draws on a broad base of experience derived from the morphology of ship design, and the visual character of its individual parts follows the traditional shapes used in shipbuilding. It emphases ship minimalism, reflecting this in both the structure and design of the terminal and in its visual logic. Its predominant feature is the balance between the (in)visibility of the terminal and its strong architectural design derived from the nautical morphology, as well as the visual mimicry connecting the terminal with its native environment. Thanks to the optical effect created by the deck edges tapering into cutting edges, it dematerializes more on both sides, which is emphasized by the reflection of the water and sky on both surfaces of the terminal wings. The basic shape is based on the spatial rotation of three propeller blades, which was further shaped with regard to the functional arrangement of the building. The terminal’s appearance is also based on the expressive hull shapes required for hydrodynamics. It evokes the constant (though often imperceptible) movement connected with the flow of the water in the river. 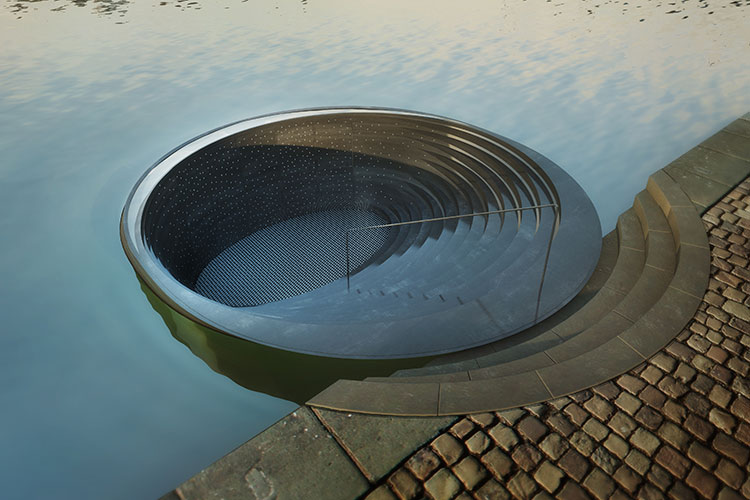 The project focuses on the seemingly marginal issue of toilets, which, however, is of importance in the area, considering the target group includes almost all visitors to the riverfront promenade. The design is not visually suppressed, on the contrary, it strives to achieve a clear character that will identify this part of the embankment. It is based on non-dominance and natural integration into the area. It is spatially submissive, with its body submerged beneath the surface of the water, allowing an unobstructed panoramic view from the river bank. 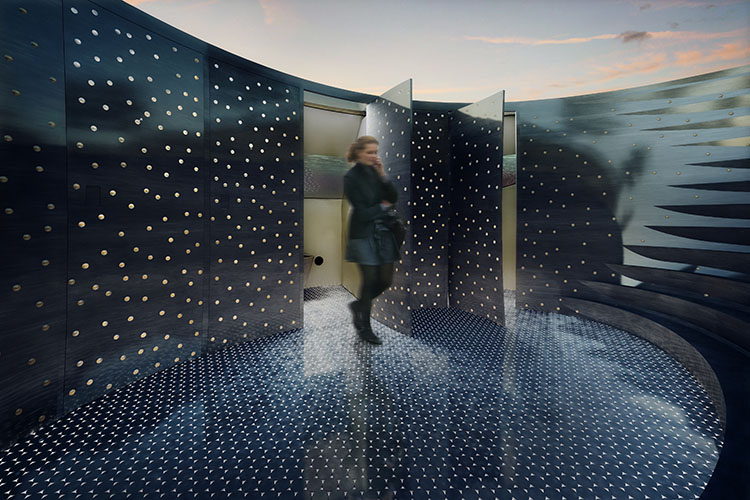 At the same time, thanks to being positioned directly in the exposed view of the river, it stands out, providing clear orientation and easy access to the public toilets. The individual floating toilets are within view of each other, giving a rhythm to the entire area. The toilets are accessible directly from the riverbank promenade via semi-circular stairs built into the edge of the bank and conform to its shape. Users descend to a lower vestibule in front of the toilet cabins, where they can comfortably wait. Each floating toilet contains 5 cabins. Two cabins on the sides are for men, the two middle cabins are for women and one is unisex. The floating toilets are formed by a diagonally-cut, elliptical steel tube, which, together with the ballast in the bottom, creates a weight equivalence allowing the entire object to be submerged. This body is anchored to a rail below the object, allowing it to rise and fall with the movement of the river.