Austin Maynard Architects has recently renovated and extended a post-war bungalow in Canberra for a family of three — Lindy, Paul and their teenage daughter Mia. The Australian capital is home to some of the best examples of post-war and modernist architecture in the country. The Empire House is located in a culturally significant and important area of the city, on a ring-road that forms part of architect Walter Burley Griffin’s masterplan. The houses here are a product of an aspirational time in Australia. “As architects we felt an incredible sense of responsibility to protect and preserve the original Canberra cottage, rather than follow the trend of demolishing and replacing a with large McMansions”, explains the studio. 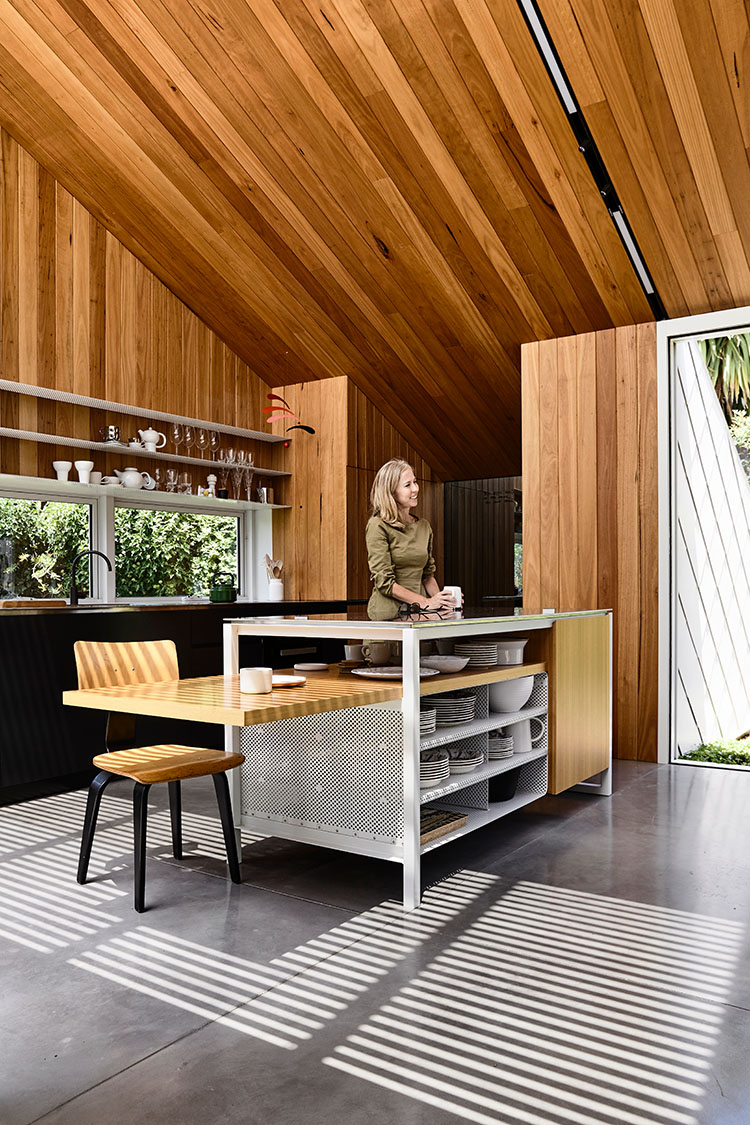 “Empire House is an exercise in considered intervention and restraint,” explained Austin Maynard Architects, which is led by founding director Andrew Maynard and co-director Mark Austin. “It would have been easier, and a lot less fun, to demolish and start again.”

The aim was to retain as much of the existing character of the site as possible and avoid the common trend of knocking down or adding a dominant, unsympathetic addition. “The two biggest issues were – how do we have a conversation with the original building without attacking it or infecting it? And how do we create sunny spaces when the sloping site levels and orientation of the house overshadows much of the garden,” said the studio. “The answer was to go in with a scalpel, making some big moves, without damaging too much.” 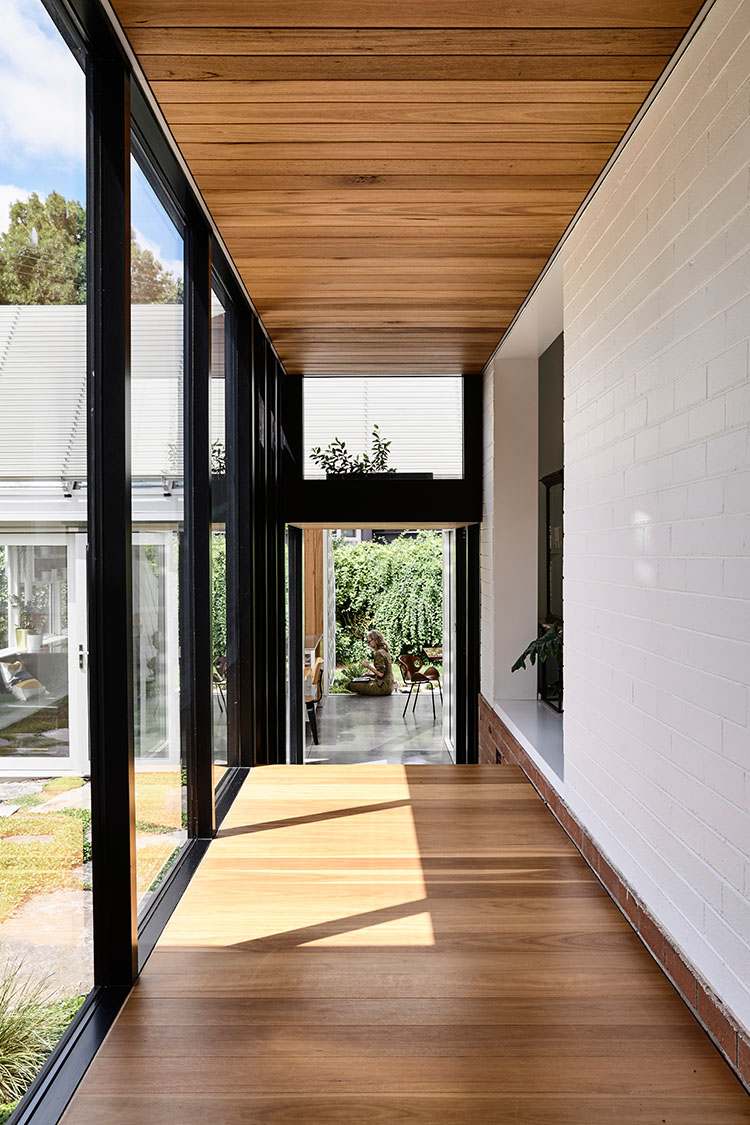 The design team cleared the site lines and created a corridor straight through the house, allowing still spaces and activity zones. They opened up to the outdoors and celebrated the exterior, giving clarity and creating a discussion between the old and the new. The two additions and the internal re-configuration has completely altered how the occupants, live in the house. With the kitchen/dining/living now within the garden, the family have better flow and usage, more indoor/outdoor space and an increased exposure to sunlight. 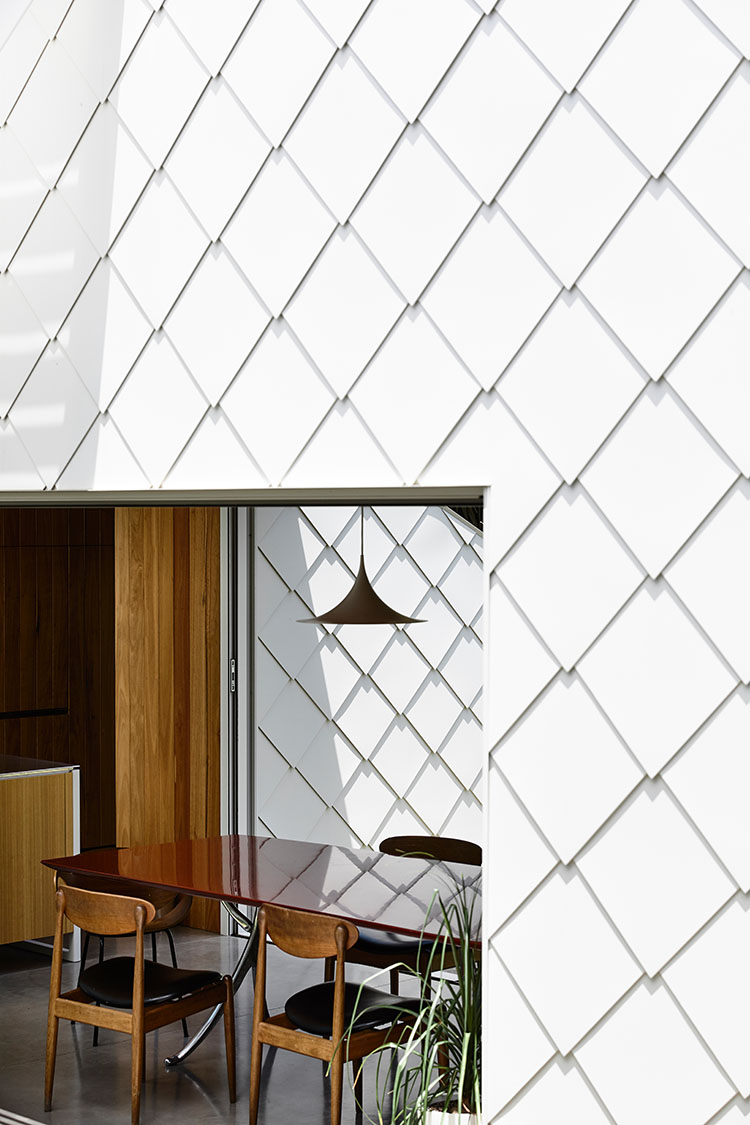 The original house was in fairly good condition overall, though the kitchen, laundry and bathroom were oddly positioned and in a poor state. The original hearth and fireplace in the living room had a great feel and were retained, along with the light fittings, windows, timber picture rail and skirting. The kitchen was relocated from the old part of the house to a new pavilion at the rear of the site, within beautiful established garden, while a seperate sleeping pavilion (with ensuite) was constructed to the side. 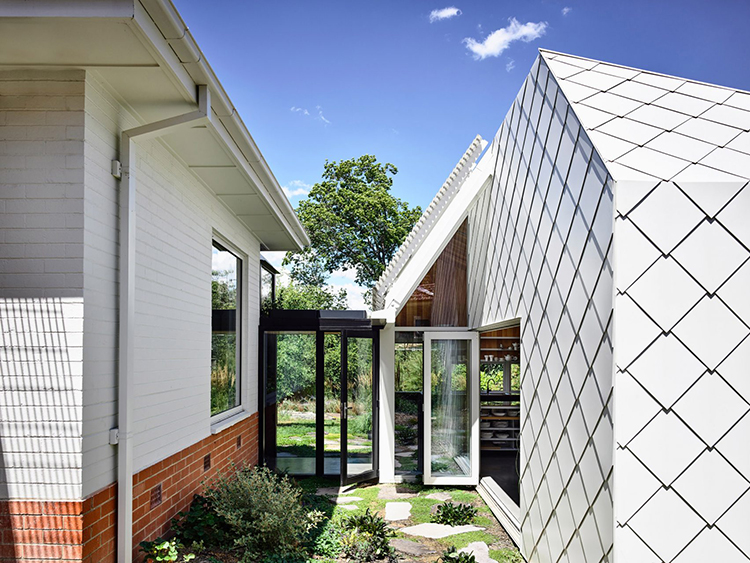 The pavilion additions are connected to the existing house via a glass ‘link’. The linking corridors are highly detailed to appear as transparent as possible. The glazing frames, cut into the brick of the old part of the house, seem to disappear. The edges kept clean to make the roof appear recessive. Between the house and the bedroom pavilion the floor floats in the form of a bridge, to cross the garden under the eaves of the old part of the house.

The master bedroom pavilion is clearly visible from the street, and it was important to us and the owners, to respect the character of the existing house, but create a distinctly contemporary piece of architecture. The white shingle form rests on a datum of red brick.

The material creates a relationship, a language and a discussion between the two eras, while making it incredibly legible where the old and new elements meet. 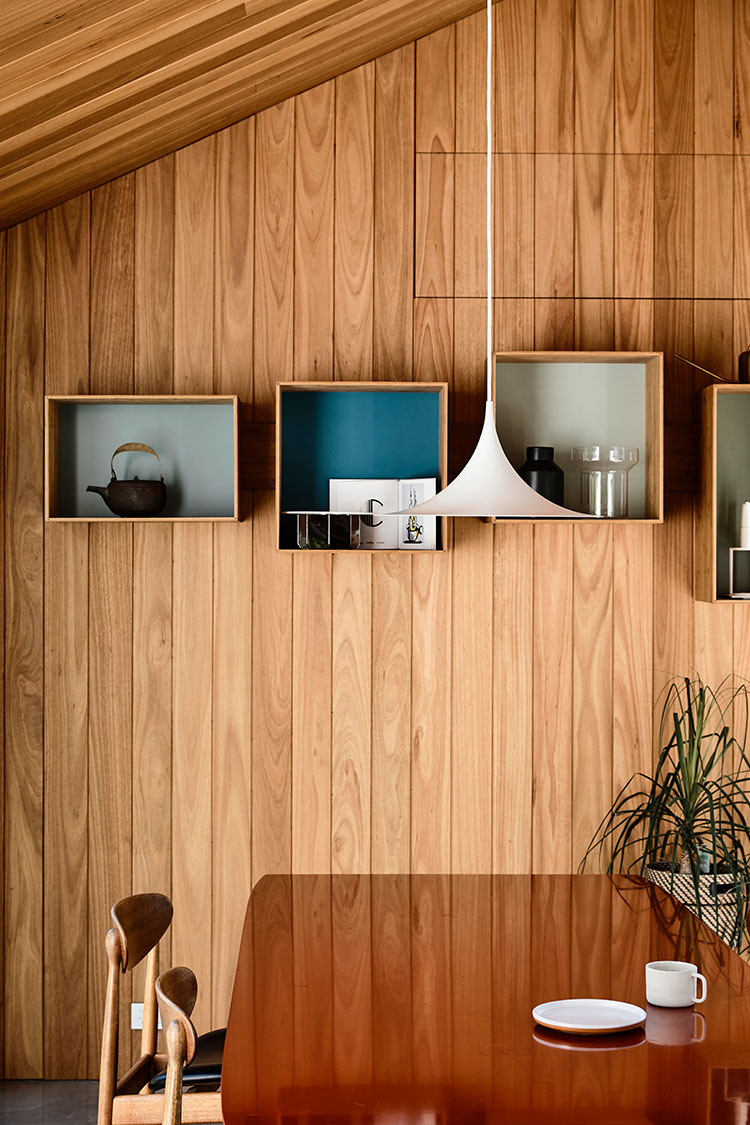 The most striking element of Empire House is the craftsmanship of the surfmist colorbond shingles. Each one hand-finished and hand fixed, they form a snakeskin-like covering that merges roof and wall in one surface, contrasting with the white rendered brick of the old part of the house. The two white materials – brick and shingle, create a relationship and discussion between the original house and the new additions.

The craftsmanship involved in the measuring, cutting and linking of each shingle is evident in the clean geometry of the arrangement. Each shingle is set-out with mathematical precision. The box gutters are concealed under a row of carefully folded diamonds, each sitting perfectly next to the other, with overflow holes being the only give-away.

When an opening is cut into the shingle wall it is detailed to avoid over-flashing, with carefully folded reveals and cleanly cut steel folded into glazing and frames. These are particularly noticeable in the large window at the rear of the bedroom pavilion that brings the garden into the room. 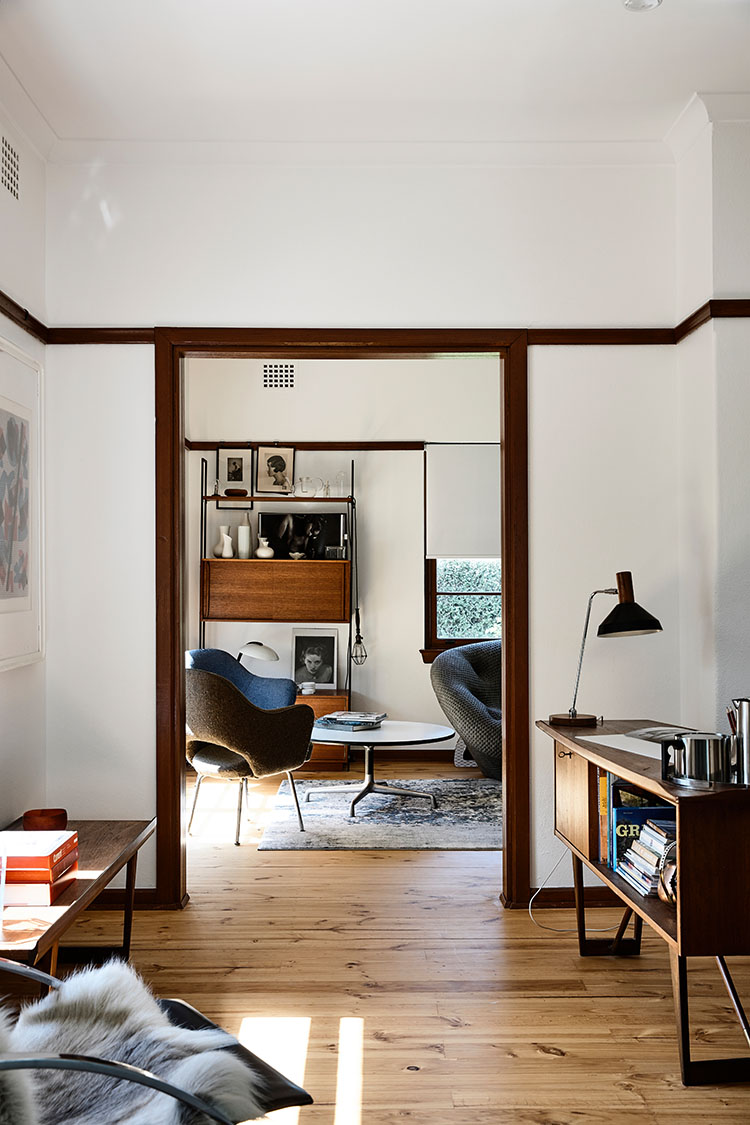 In addition to the fine detailing of all surfaces and junctions of the shingle clad pavilions, internal and external doors continue the same surface treatment.  Colorbond shingle cladding conceals them from view without breaking the surface of the ‘skin’.

The shingle ‘skinned’ bedroom pavilion addition sits on a recycled brick plinth, in a similar manner to the detailing of the sub-floor area of the old part of the house. The matching of materials contributes further to the old/new relationship as both white textures sit on matching brick at the same height.

Preferred Builders took great care in executing very refined details both externally and internally. The internal blackbutt timber lining of the kitchen and dining walls and ceiling are a fine example of the skill and care taken in construction. Various materials and finishes were used within the fabrication of the cabinetry. Stainless steel, perforated steel, solid timber clad, two-pack painted and black butt veneer finished paneling are expertly and beautifully combined. 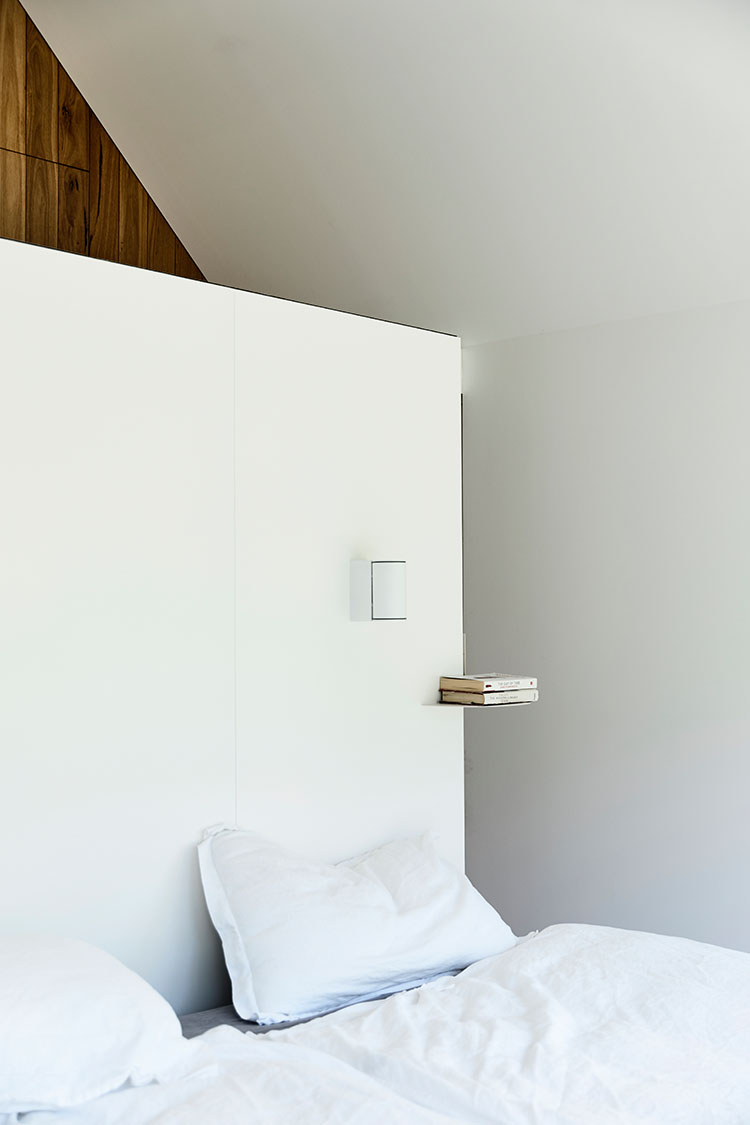 Cars are always a massive issue – typically visually dominant and taking up valuable living space. In light of an automated future on the horizon, which will radically reduce car ownership, it make obvious sense to have other uses for a garage or carport. Like the two shingled pavilions the carport at Empire stands in contrast to the old brick walls of the original bungalow. The curved steel structure of the carport produces a quality of lightness which elevates something as simple as a covered area to park a car under, to somewhere that can be used as an outdoor recreation area. 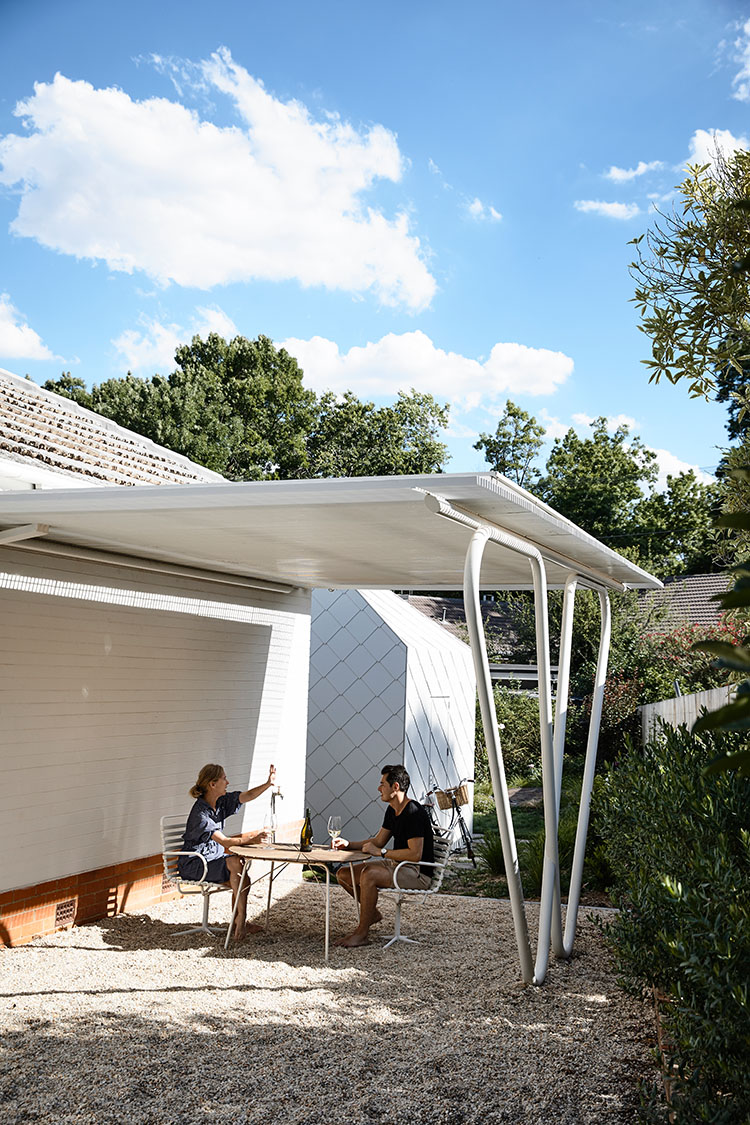 Canberra has more defined and extreme seasonal climes than other Australian cities. It’s a lot colder in winter here, so there was a lot of emphasis on insulation, thermal mass and thermally broken window frames. Throughout the colder months the sun streams in through the north facing window, heating the concrete slab which continues to radiate warmth well into the night.

The large garden increases the permeability of the site and also radically reduces heat sink in the area. Passive solar principals are maximised by the design. 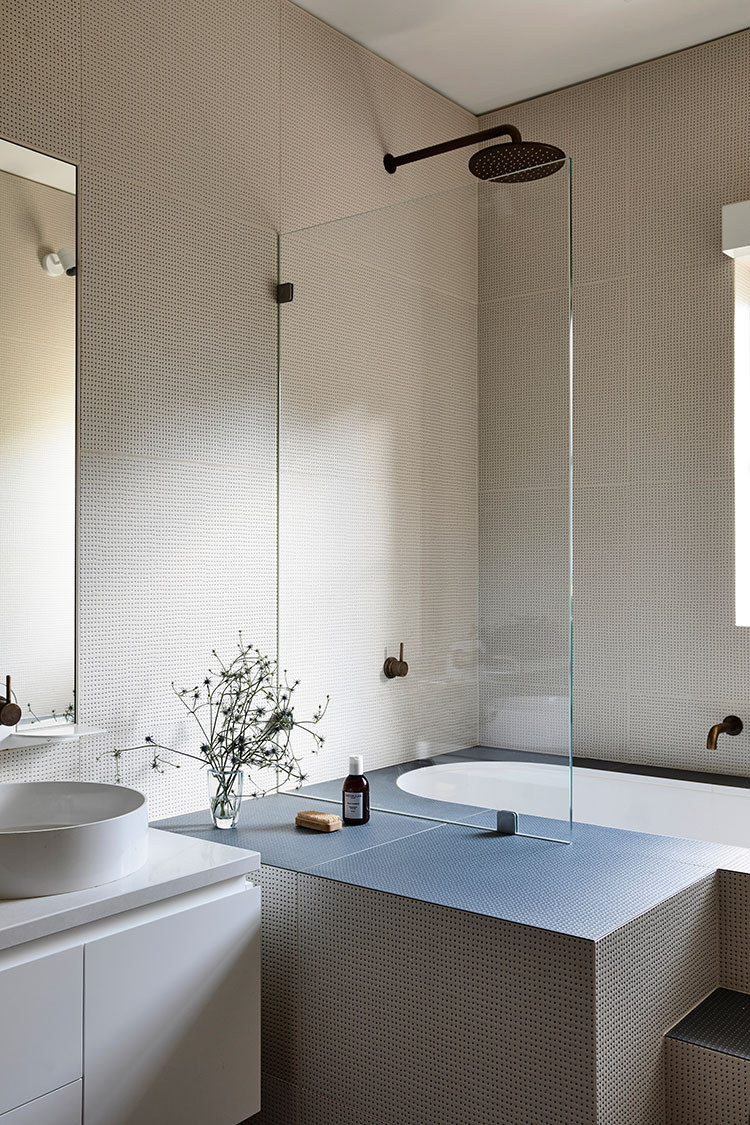 All new work aims to maximise available daylight and optimise passive solar gain in winter, while ensuring that summer sun does not hit the glass. All windows are double-glazed. With active management of shade and passive ventilation, demands on mechanical heating and cooling are drastically reduced. A large water tank has been buried within the garden and roof water is captured and reused to flush toilets and water the garden. Solar panels with micro-inverters cover the old roof.