Standing at attention to Edmonton’s Police Service, Agent Crystalline by Marc Fornes / THEVERYMANY emphasizes a sense of vigilance and acuity through its graphic associations. The work speaks assertively in the language of traffic. In the lexicon of traffic, hues that demand awareness are vital. The vibrant array strikes a balance between safety orange and a sweeter tangerine. Adopting the coloring of the construction offers the structure the ethos of protection and productivity; as well as a bold timeless feeling. 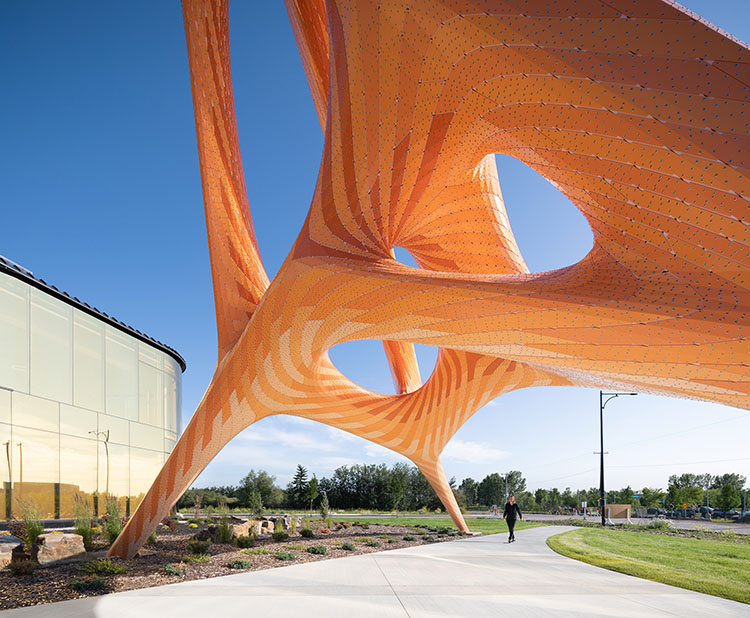 This balanced pinnacle wears a curated skin of racing stripes inspired by the bold lines of motorcycles, speed boats, and race cars. Orange hues are applied across the aluminum stripes to emphasize the directionality of the bias patterning and produce continuity at each connection. There are six colors in the gradient plus a pale pink under layer. The eye is caught between the reading of continuity and contrast, lending intense vibrating energy to that which remains still. 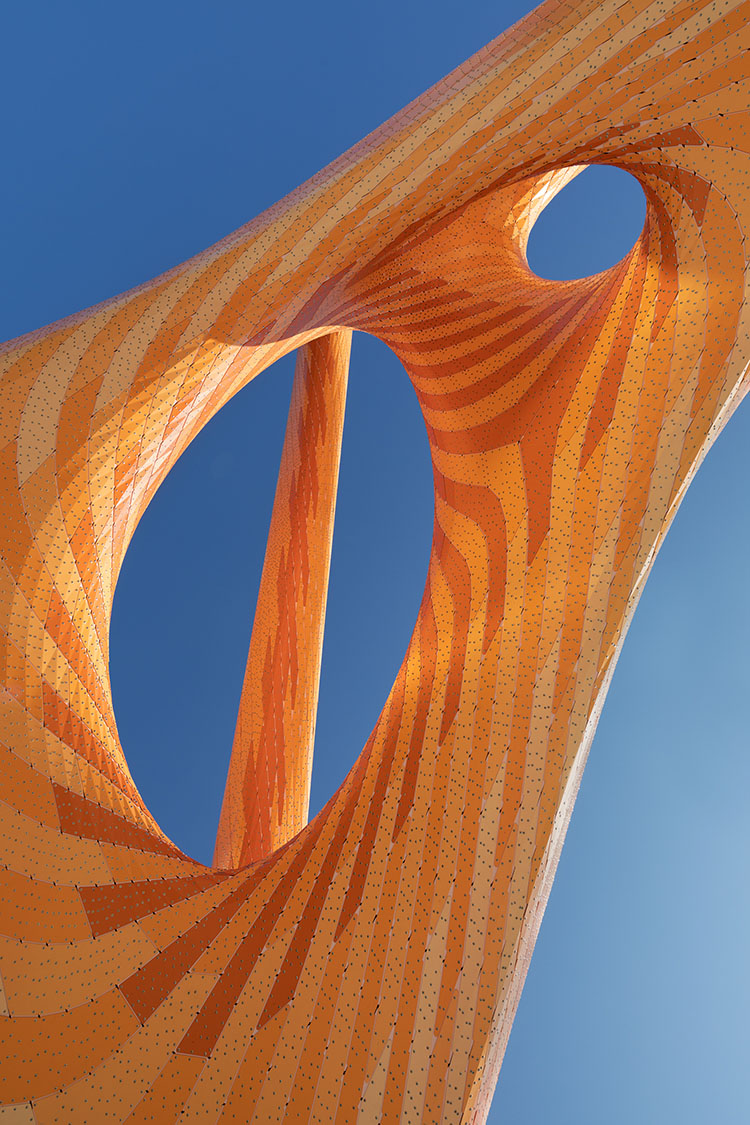 The shades of sunset duel as they gradiate across two layers of ultra-thin aluminum skin. Consistent with the embedded language of traffic, contrasting stripes of a road sign are built into the structure of the work . The visually pulsing moments signal interaction from afar and call focus to details within. More than ever before, the structural striping system is describing tight curvature, swirls, and twists. Contouring segments derived from parallel agent-based protocol, dive and flex at the epicenter. After defining apertures and spines, stripes wrap diagonally over the tripodal legs and descend to the ground in tight coils. Essential to its powerful presence, movement is captured in the twists of the stripes along with directional limbs. Twisting and assertive, Agent Crystalline attains a poised stance at this entrance representing authority and respect. 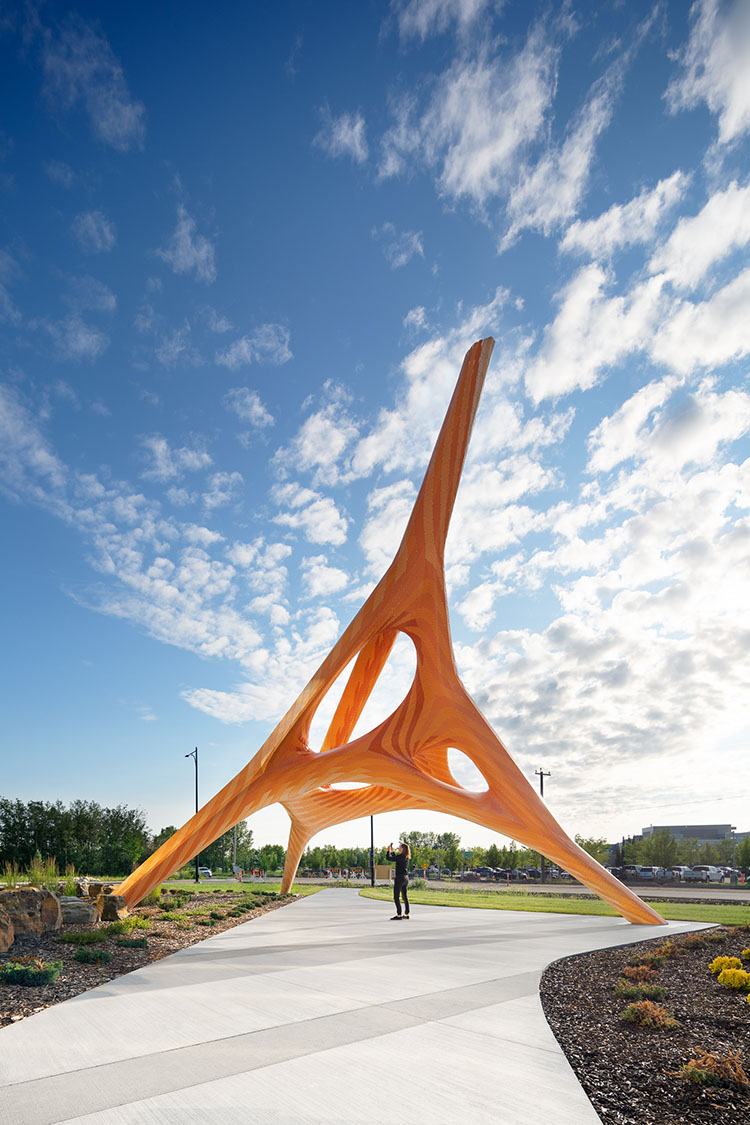 Developed on an urban fragment on the outskirts of Edmonton city proper, Agent Crystalline asserts itself as an icon of this landmark campus. The objective is to appeal to the visual speeds of passersby from the nearby roadways. The form captures pulls in the kinetic energy of passerby and embodies visual speed. Authority is distilled in the surging motion captured frozen in time.

Elements of different design eras -ranging from the groovy seventies to the organic minimalism of modern times- are sampled from and merged together in the aesthetic of the iconic gateway. This combination of styles produces an environment that pulls on a variety of contextual references. In discussion and in interaction, viewers may envision a traffic cone, a tangerine Porsche, or the vibrant whirls of seventies illustration. 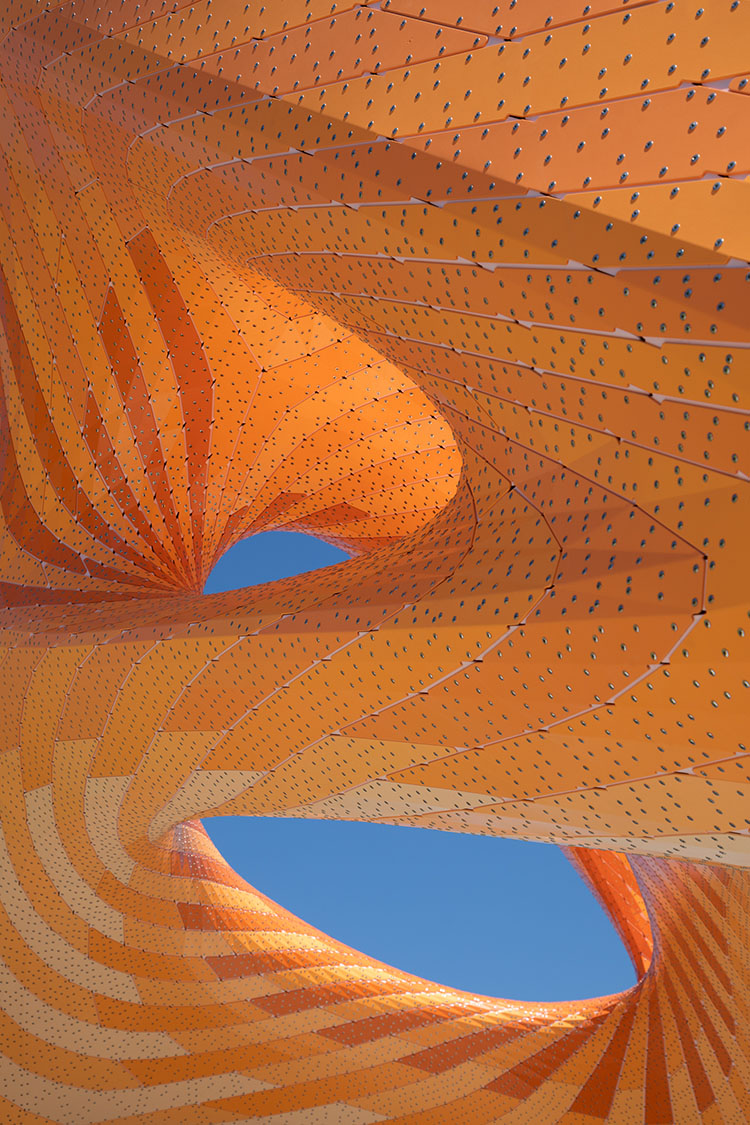 Situated between the Police Campus the surrounding network of access roads, the artwork serves to connect all lines of sight and approaches into a single powerful node. The collection of these moving energies centers upon the convergence of three legs and shoots up into the sky.

From a distance and on approach, Agent Crystalline draws attention and signals interaction. Once within, visitors will be met with a tangle of converging arches. Acting as both an iconic beacon and a gateway path to the main building, the reaching structure pulls in external pressures and outputs kinetic force. Coils of twisting stripes proudly announce the structure and entice visitors to explore the intricacies of the designed skin. Visual cues speed up and halt the eye and the pace through the piece. A stroll through asks one to slow down to understand the shifts where saturation deepens along spines and within curves. Otherworldly views of the expansive sky open between bold saffron lines. 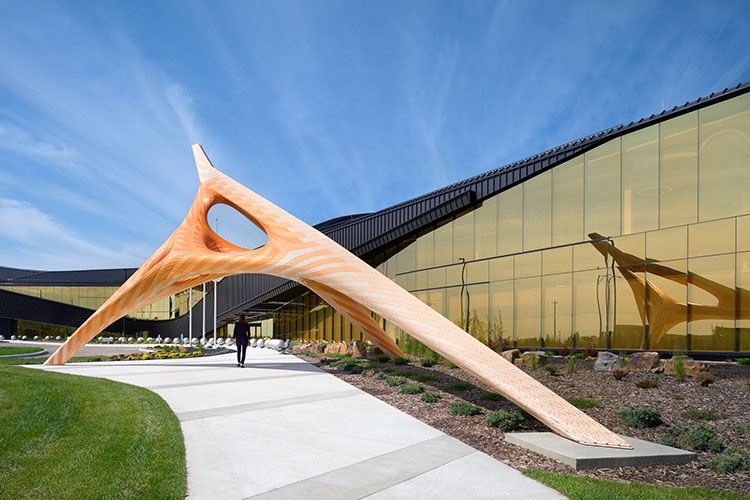 Given that the structure serves many roles, the geometry needs to be deceptively simple. An archway, an iconic sculpture, and an immersive interior experience, the work complicates a known structural geometry into something more complex. Although pulling multi-directionally, the form’s base geometry is derived from a tetrahedron: three vertices are pinned to the ground, while the fourth vertex rises vertically and toward the building entrance, producing height and a spirited angle. Each of the resultant nodes is differentiated to create a sophisticated network at the center. No single approach or experience is alike, with each viewpoint and at every entrance, a unique condition is revealed that will transform a simple walk into a grand adventure within.