AirMesh is the world’s first architectural structure made of 3D printed components in stainless steel, demonstrating innovative digital design and manufacturing technologies developed by AirLab at Singapore University of Technology and Design (SUTD). The ultra-lightweight pavilion, located at Gardens by the Bay, is both a gathering space and a light sculpture. 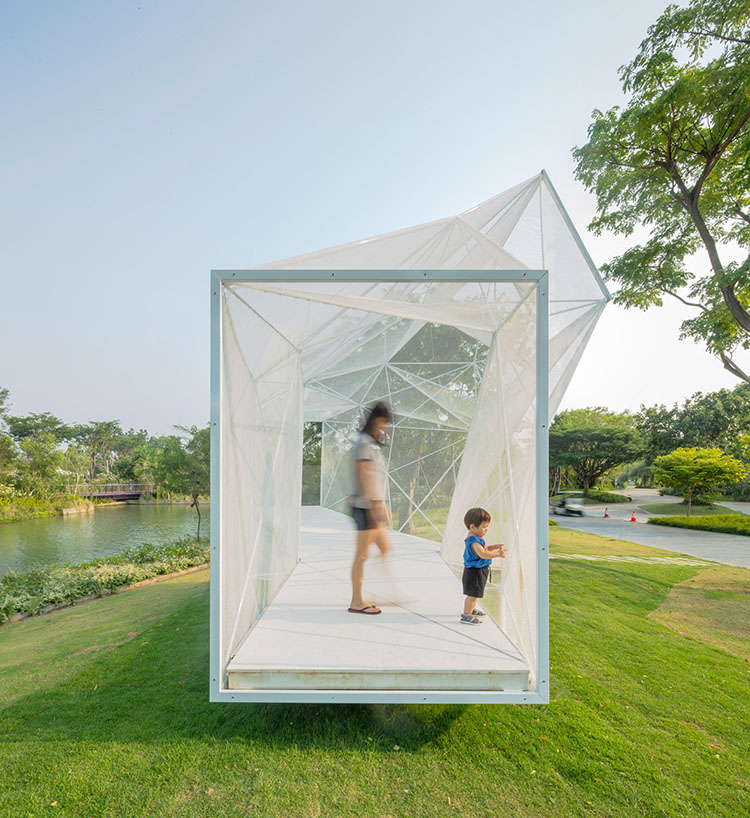 Airmesh has been in the works for five years now at SUTD with Professors Carlos Bañon and Felix Raspall. Employing the most classic benefits of 3D printing, the group’s goal was to create products with ‘extreme lightness’ as well as making a structure optimized for high performance. The team worked together from a common point of inspiration: a 3D neural network concept that is not only interconnected but ‘extremely redundant.’ 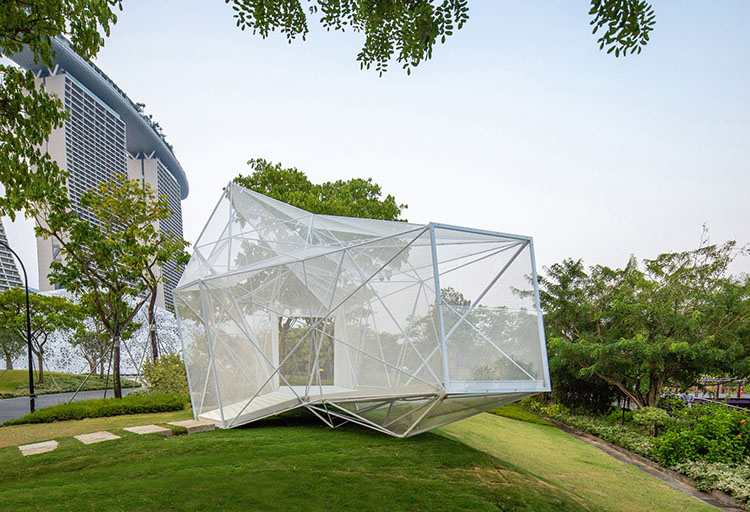 The design makes up the world’s first space frame, following Eurocode regulations, approved by Singapore Building Construction Authority (BCA) for a short time of occupation. The ‘digitally-crafted belvedere’ is installed and has been open to visitors since August 30, 2019.

“As the first of its kind, it fosters Singapore’s design and innovation edge. AirMesh structural prowess pushes the limit of slenderness and therefore aims to inspire dare and curiosity in users,” said Bañon, Lead Designer. 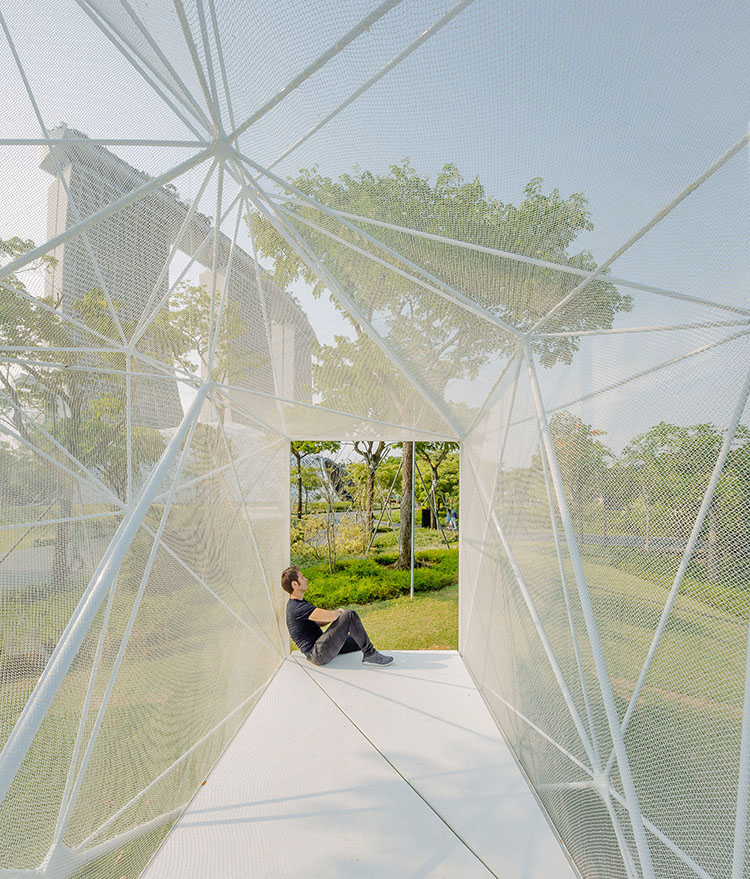 The designers were able to create the lightweight structure due to the tetrahedral configuration, bearing the load of 200 linear elements coming together in 54 parametric bespoke 3D printed nodes. Described also as an ‘ethereal pavilion,’ the structure is situated on a green slope, attached in eleven points. Its convex hull is meant to connect visitors to the following four points as the breeze and sunshine flow through: the dragonfly bridge, the silver garden, the Marina Bay Sands, and the pavilion entrance. 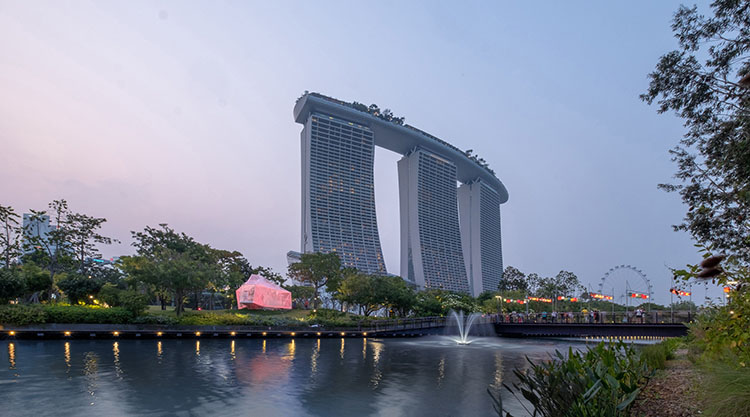 “Over five years, we have developed a system whereby any form can be conceptualized, fabricated and assembled by means of computer code created in our lab. It unlocks immense possibilities for future architectural designs like transportation hubs, large span roofs, and even skyscrapers,” said Anna Toh Hui, Lead Researcher, Airlab SUTD. 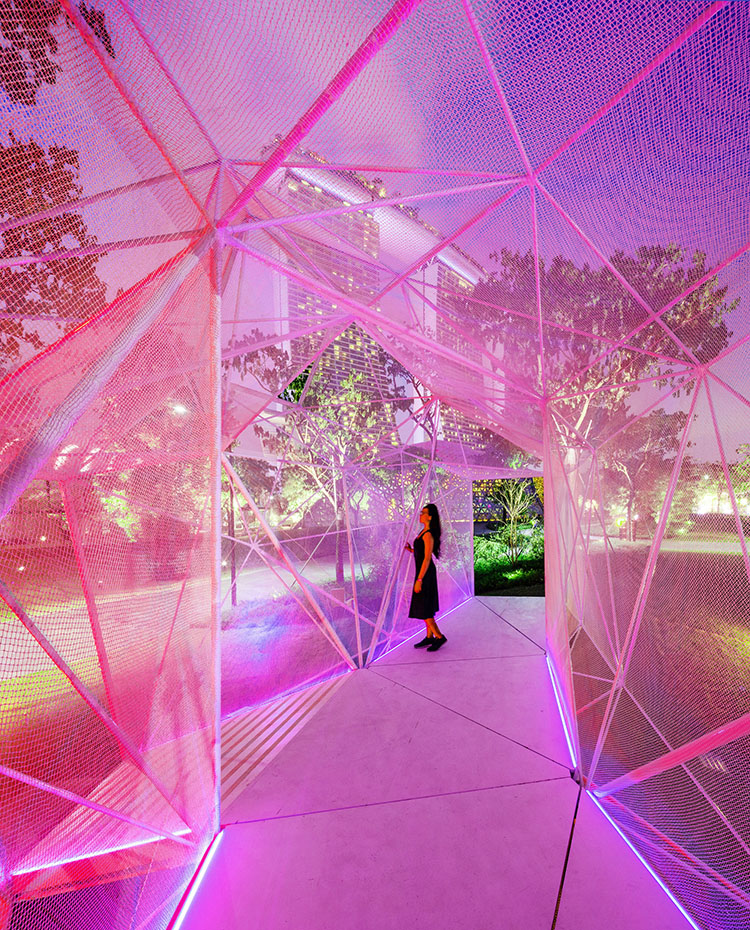 “With this new milestone, SUTD is proud to put Singapore at the forefront of innovation in high-performance 3D printing in architecture and structural design,” said Bañon.

One of the most fascinating aspects of 3D printing today is the potential offered in architecture, whether users are creating prototypes for walls and arches, homes of the future, or even creating interactive living structures.