Architect and designer Sergey Makhno has recently renovated an existing building in the suburbs of Kiev to create a new residence for him and his family. The house – named Shkrub after an affectionate term used by Makhno and his wife for the structure – is built in contemporary Ukrainian style under the influence of Japanese philosophy of wabi-sabi that finds beauty and harmony in imperfections. Being almost completely enclosed by a minimalist concrete fence, its character can be seen with half an eye — a proud thatched roof hangs over the wooden rails on the walls. 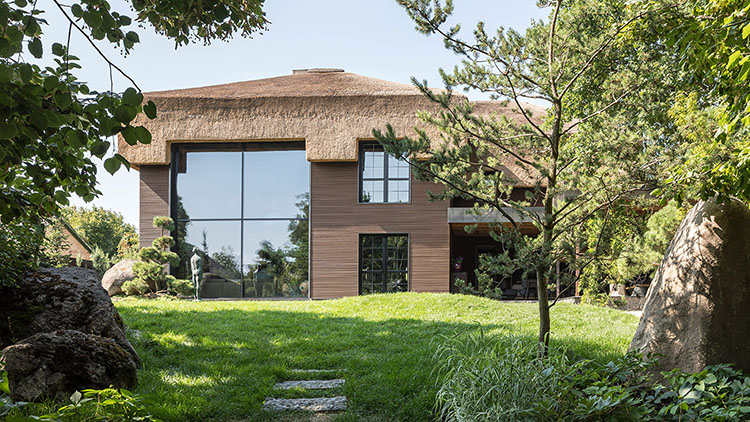 “Thanks to Japan, I learned to love Ukraine. When I went to Japan for the first time and saw how they appreciate their heritage, I understood that Ukrainian culture is extremely rich but we rarely rate it highly. Japan has given my country back to me. It has opened my eyes and, most importantly, my heart to the wealth I have always had — my homeland. Even if I wanted to do Japanese design — it would not work. Because I’m Ukrainian. I create Ukrainian design transmitted through the lens of Japanese perception of beautiful,” says Sergey Makhno. 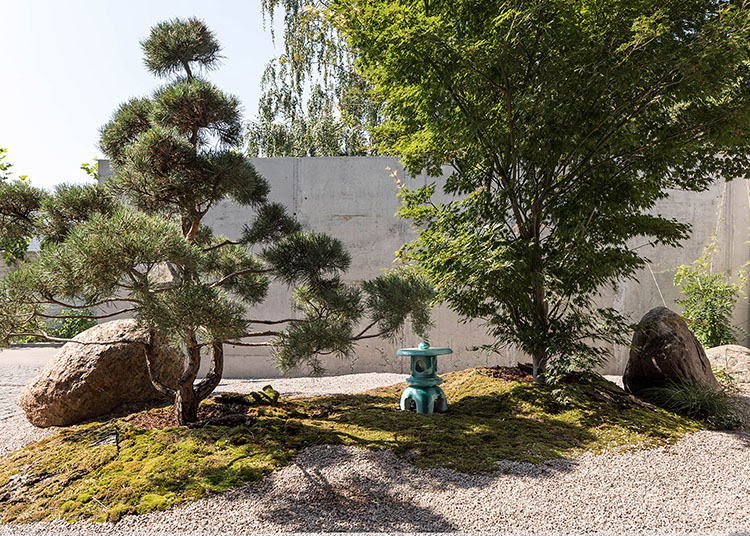 The Shkrub House has two entrances — from the facade and the courtyard. The residents immediately fell in love with the second one. Right next to it, there is a terrace illuminated by the stars and the designer lamps by Sergey Makhno. 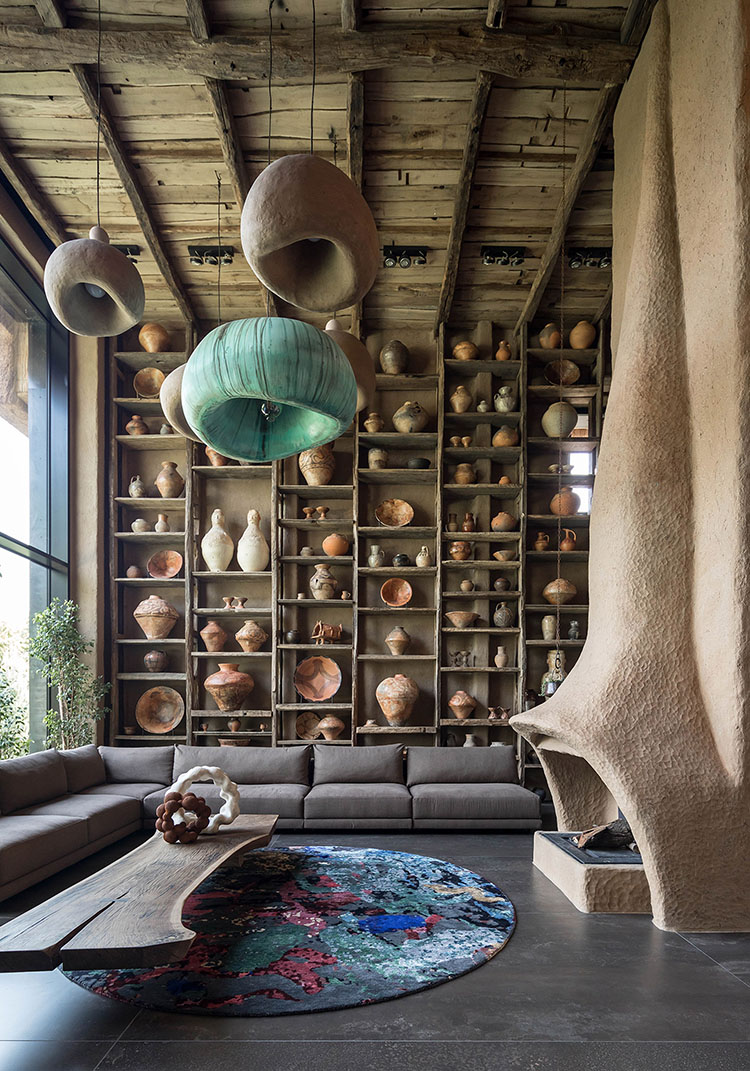 Make a step into the house and the cool of clay will absorb not only the telephone but also all the worries, “urgent-s” and “necessary-s”. The stairs to the second floor run to the right, and the main area of the house is located to the left.

The walls are decorated in the technique used by our great-grandparents for their huts. The space is divided into three parts: an open kitchen, dining area, and living room. This part underwent major changes during the redevelopment of the original house that was here before the architect became its owner.

Uniting two floors was the only right solution for this object. All the architects understand that space and light are the best things you can give to any place. A panoramic view of the garden is offered by a huge window. All the family stories are protected by a silent guest — the sculpture “Rain” by Nazar Bilyk.

The wall and ceiling are decorated with wood — we just dismantled 11 old abandoned houses. Giving a second life to things is the best we can do for our planet. 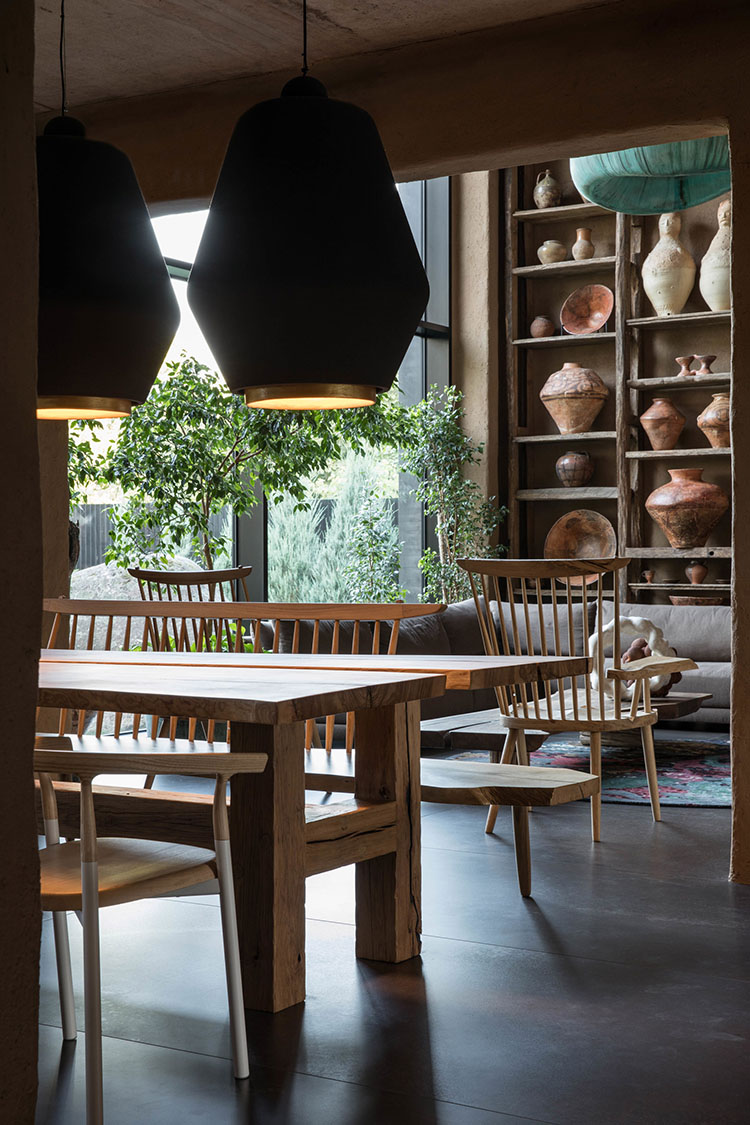 As you may have noticed, Sergey is an enthusiastic collector. He started collecting Ukrainian ceramics as a kid playing around grandparents’ house in the village. He found the very first ceramic jugs in the yard, cleaned them and started to search for more. Now, the most significant part of Sergey’s collections is represented at this wall — there are clay products from Trypillia, 5–2nd Millenium BC.

There are no things here. Everything means something to homeowners. The carpet pattern, for example, was created by Hikaru, the middle son, when he was less than two years old. 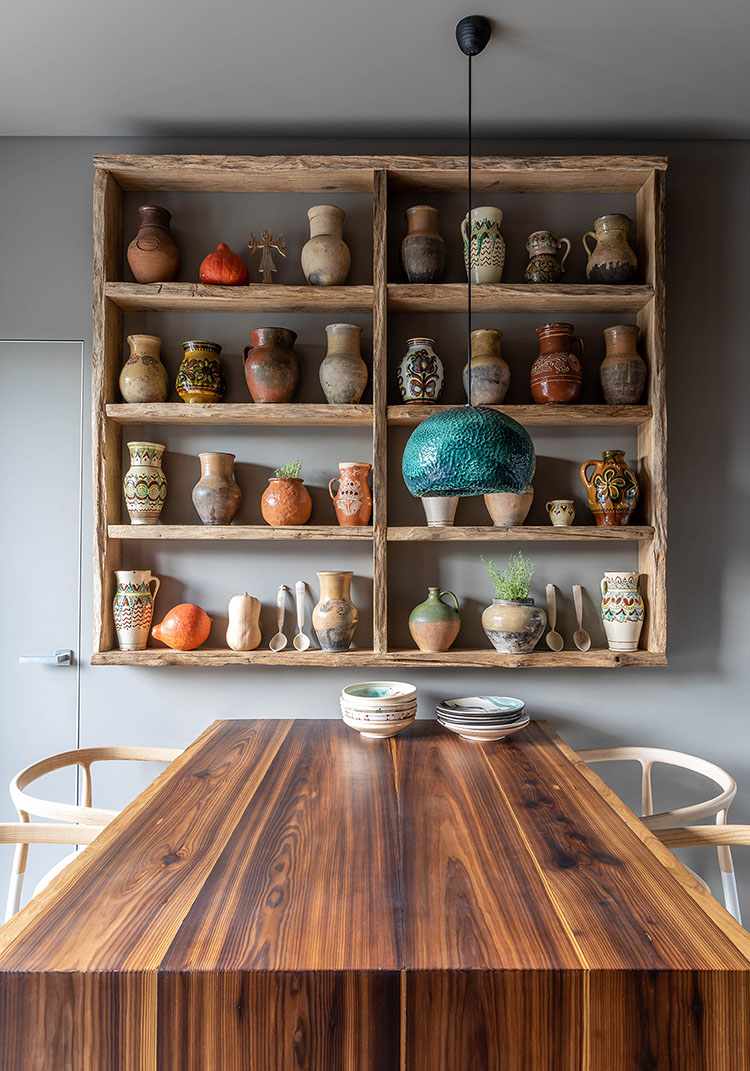 The dining area is the family’s favorite one. It sings an ode to a tree — warm, simple, perfect. Every place at the table offers a great view — to the living room, garden or terrace. If you ask Sergey what Japan means to him, a tea ceremony will be the first mentioned. Teacups are more commonly used in this home than wine glasses. 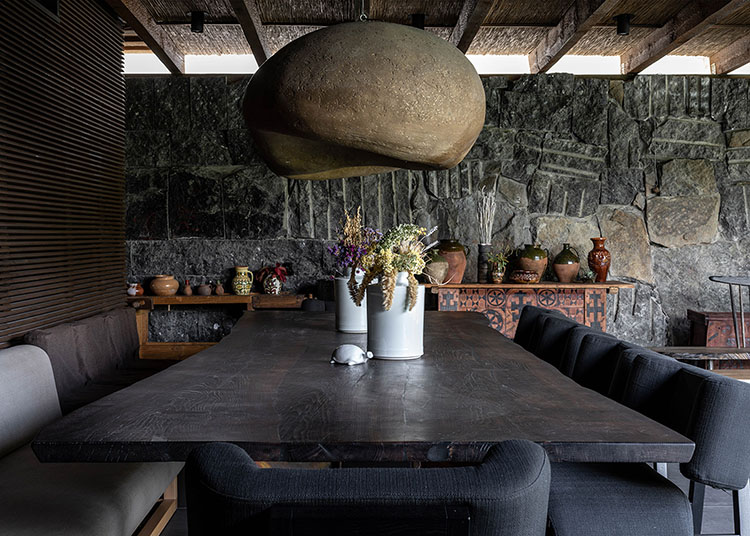 The house has two kitchens. The minimalism of the open one is emphasized by a wooden table from a flea market, that replaced the kitchen tabletop. This table was born in 1935, and several generations of the Hutsul family have dined at it. The closed kitchen was designed according to Ukrainian traditions. Above the table, there is a “mysnyk” — special authentic shelves for dishes. The apron of the kitchen is protected by Sergey Makhno designer ceramic tile “Rock”. You can exit the kitchen through the window — everything in this house is made for ease of decision making. 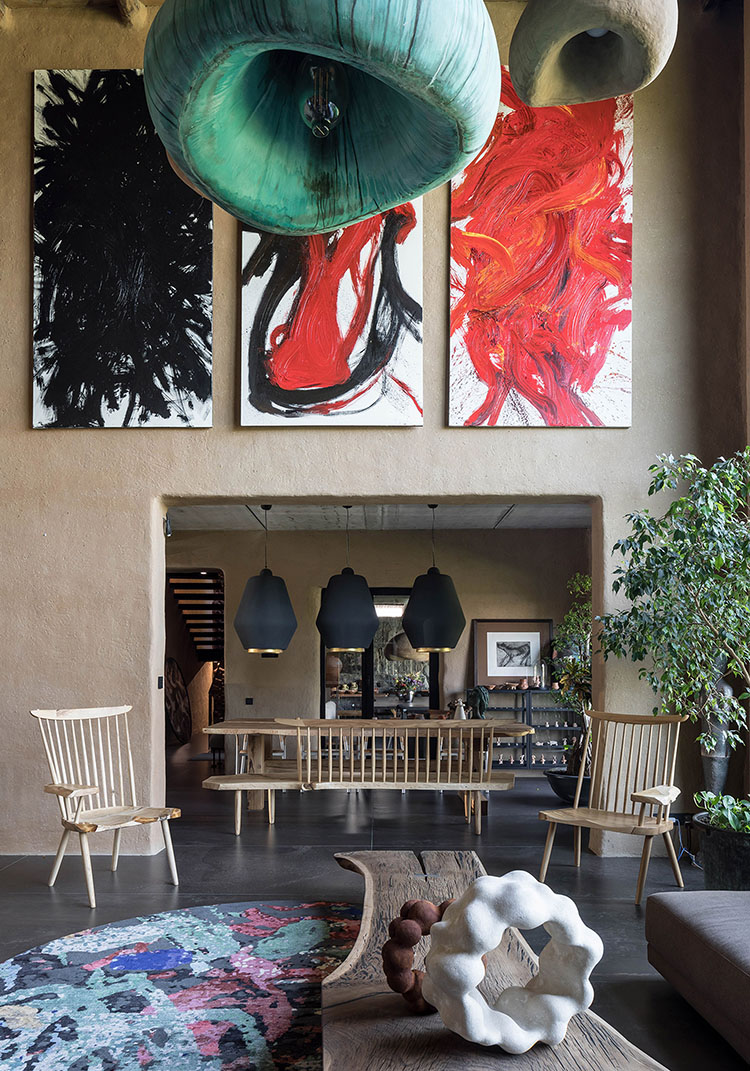 Sergey’s parents are frequent guests in this house. It is believed that grandparents love grandchildren more than children — in Ukraine, the connection between these two generations is very strong. Therefore, in the evenings, when Sergey and his wife are in the downtown, the kids are being watched by their grandparents. Their room is very simple and restrained. The traditional for Japan low mattress is no longer surprising to Sergey’s parents — they are used to creative experiments of their son. 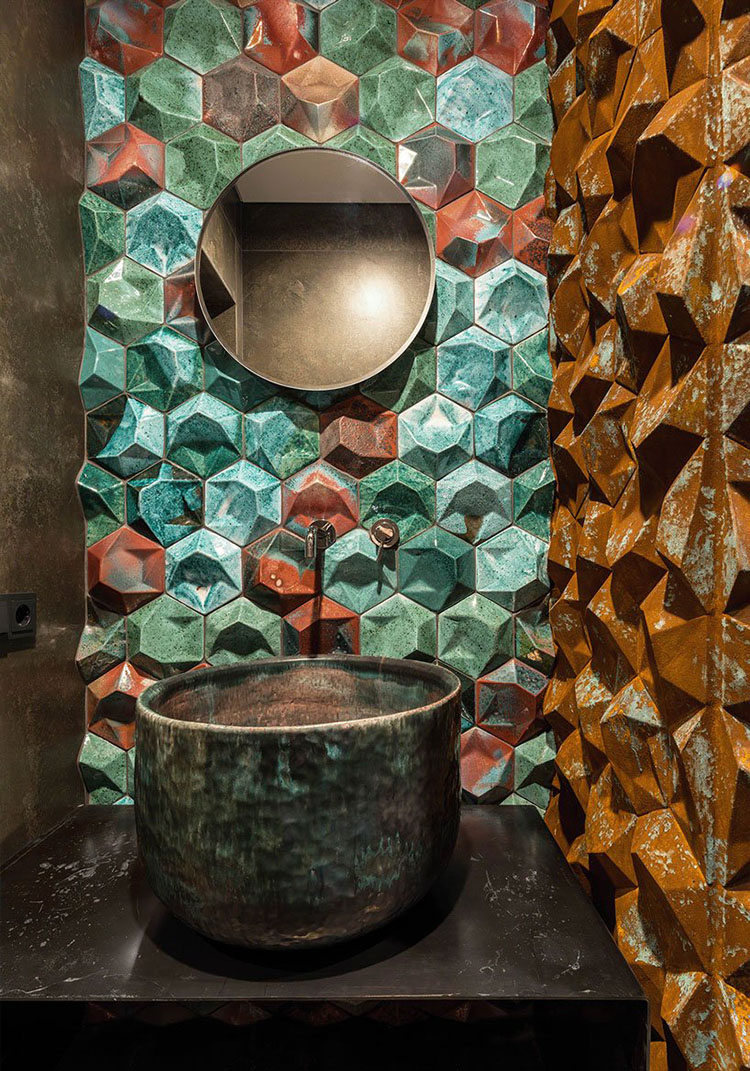 The guest bathroom is a gallery of designer tiles by Sergey Makhno. Here are the “Grass” and “Earthquake” in two versions: glazed and metal-reduced.

The stairs to the second floor hold glass handrails and ginger “Tetrapods” — the designer tile by Sergey Makhno Architects inspired by actual multi-tone tetrapods that protect coasts from destructive waves. 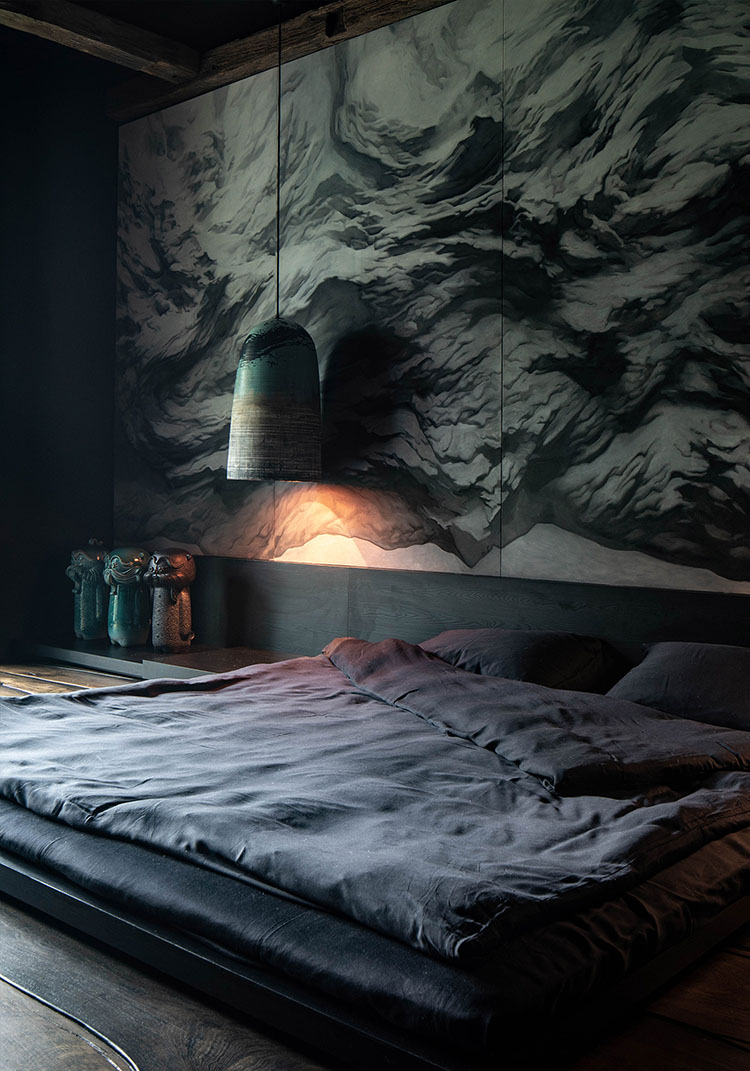 Second-floor planning is simple and ergonomic. There are gallery-hall and bedrooms for the residents. The hall ends with a balcony overlooking the living room and garden — the first thing owners see when they leave their rooms in the morning.

The decor here is represented by the 16-century ceramic tile and the guardian angels above the doors to the children’s bedrooms. The window overlooks the second level of the stone garden and a rooftop terrace. This is analogous to one of the most famous Japanese gardens — the stone garden of Ryōan-ji in Kyoto. The rocks and sand in Ryōan-ji are like the sea and land, two inseparable entities. 15 large stones of the garden are laid out in such a way that no matter how hard you try, but no more than 14 stones can be seen together. It is believed that only the person who has attained true enlightenment can see all the 15 ones. 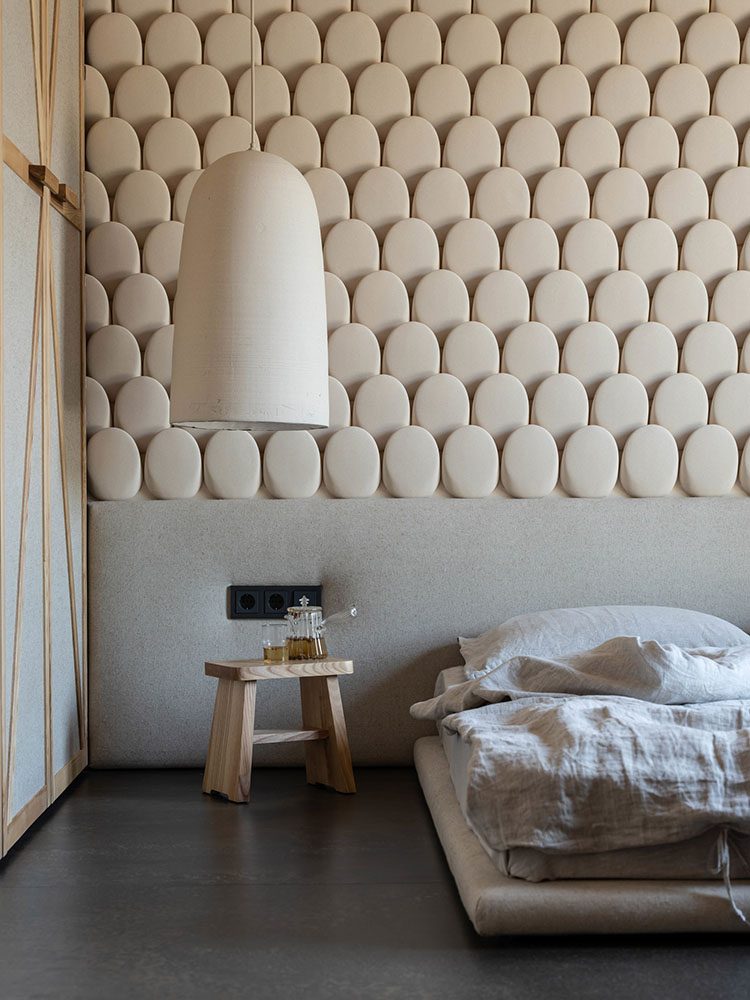 Ivan is Sergey’s eldest son. He is studying in Italy and planning to continue his father’s business. His room is traditionally made in dark colors. The main focus here is the view of the garden and the floor made of a 500-year-old oak. Ivan shares his room with Kaws and ceramic art-toys DIDO created by his father.

At the head of the tatami bed — Sumi-e-style monochrome art piece depicting distant landscapes, traditional for the wabi-sabi philosophy. 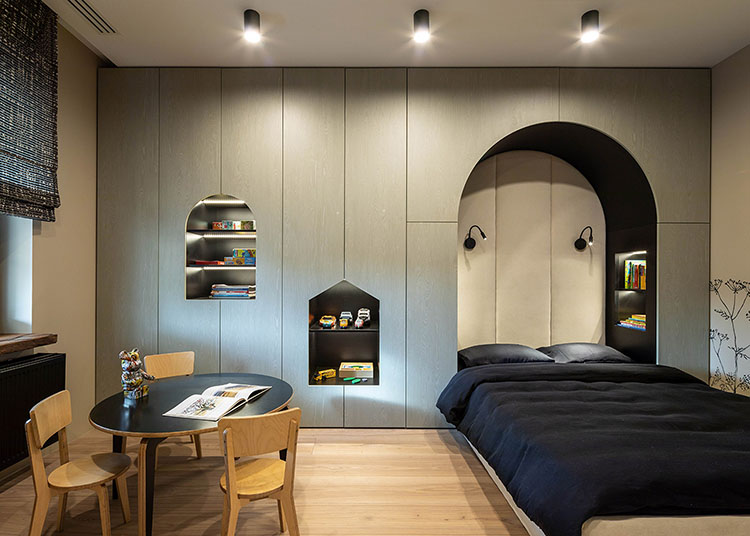 This is a very important room in the house. Here, the rockets will be launched into space and the pirates will be defeated. Here, the real treasures will be found and hidden so thoroughly that mom will never find them. Here, a kitten will be brought from the outside. Here, the walls will be painted with brilliant green, and perhaps, the Kaws’ ear will be torn away. By the way, the wallpapers are made by Sergey Makhno. He draws from early childhood, and still, most of his ideas appear on the paper first. 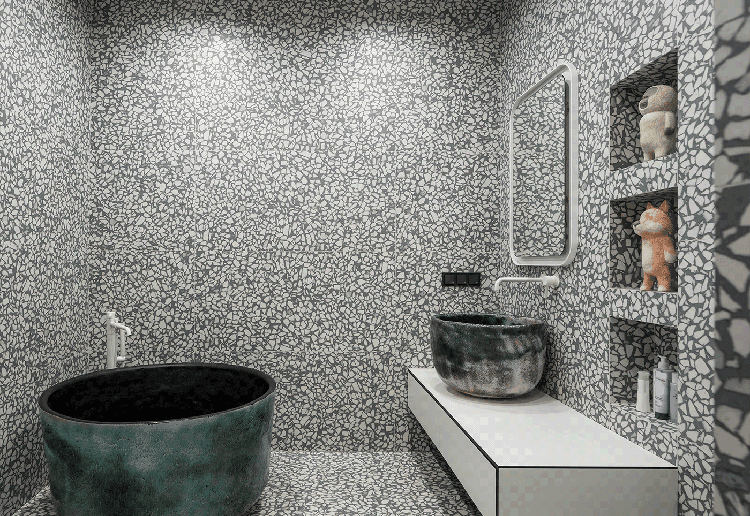 Children’s dreams will live here. So, it is the life that will settle here. The room of the youngest son is also minimalistic and spacious.

The wallpapers are designed by Sergey Makhno. At first, the father made chaotic blues spots on the craft paper, and then, the walls were painted by famous Ukrainian artist and ceramist, Serhii Radko. These are traditional themes of his works — animals and birds that live in Ukraine and symbolize family.

Although the younger sons are very small — 2 and 4 years old, it was important for the parents for everyone to have their own space. The space that kids will transform into the universe. 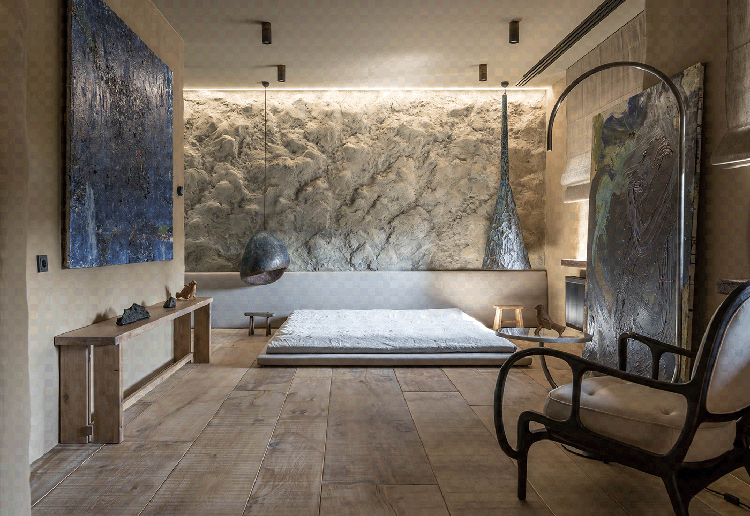 You may be wondering what the word “Shkrub” means. Shkrub is love. It is respect and patience. It is home. It is sons. It is 10 years together. Shkrub is a fictitious word the spouses call each other — Sergey and his wife Vlada, who is also engaged in interior design. That’s how they are named in each other’s phone books.

The master bedroom has several separate zones. Recreation area, study, shower room, and bathroom. The head of a tatami bed is an allusion to a clay cliff as a symbol of all the primeval and its beauty. It is a unique technique implemented by the Kelsis studio. 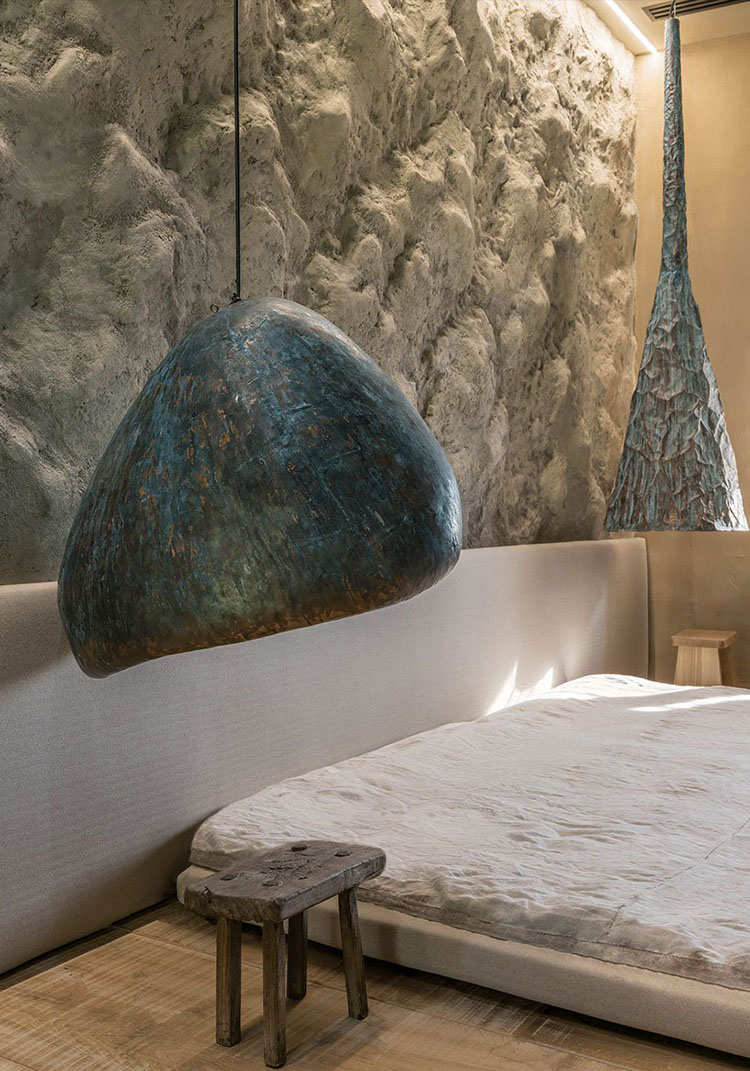 The study area has an open window to the living room and another perspective of the garden. Metal lamps appeared in this room as a symbol of the owner’s character. Also designed by Sergey Makhno Architects studio.

A shower room is a shower room. Meditative and restrained. To wake up and plan the day in the refreshing water drops. Day by day, for a lifetime.

“When in five thousand years, archaeologists from other planets will dismantle my house, they will say that it was built according to ancient Ukrainian traditions. That there was a lot of nature, and a lot of life,” says Sergey Makhno.