Following the WeWork’s WeGrow in New York and the Isenberg School of Management at the University of Massachusetts Amherst, Bajarke Ingels Group (BIG) has now completed another school project in the US state of Virginia.

The Heights Building opens as a cascade of green terraces fanning from a central axis, addressing the academic needs of Arlington’s two county-wide school programs while forming a vertical community within its dense urban context. 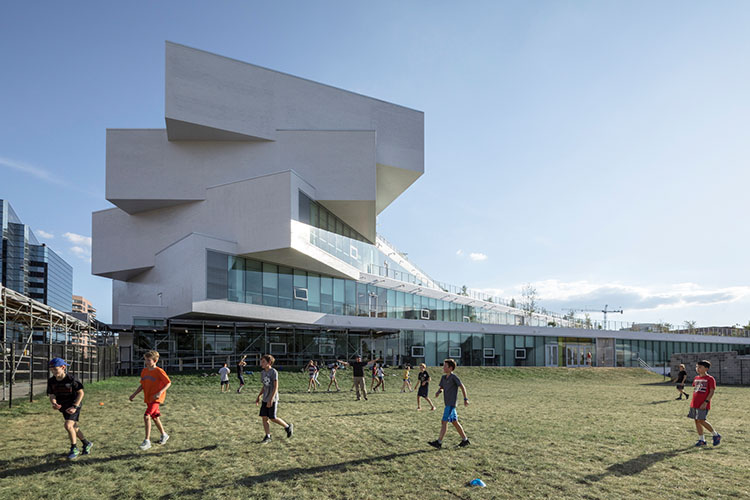 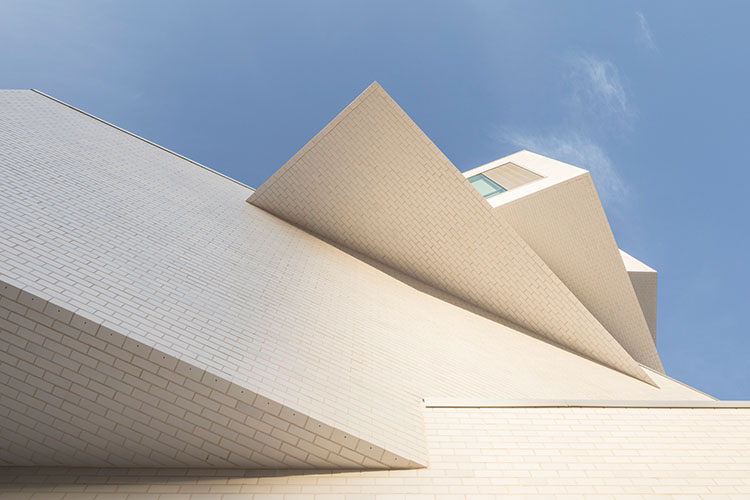 Situated within a compact urban site bounded by roads on three sides and a portion of Rosslyn Highlands Park, The Heights is conceived as a stack of five rectangular floorplates that rotate around a fixed pivot point, maintaining the community feeling and spatial efficiencies of a one-story school. Green terraces above each floor become an extension of the classroom, creating an indoor-outdoor learning landscape for both students and teachers — an educational oasis rather than a traditional school setting. 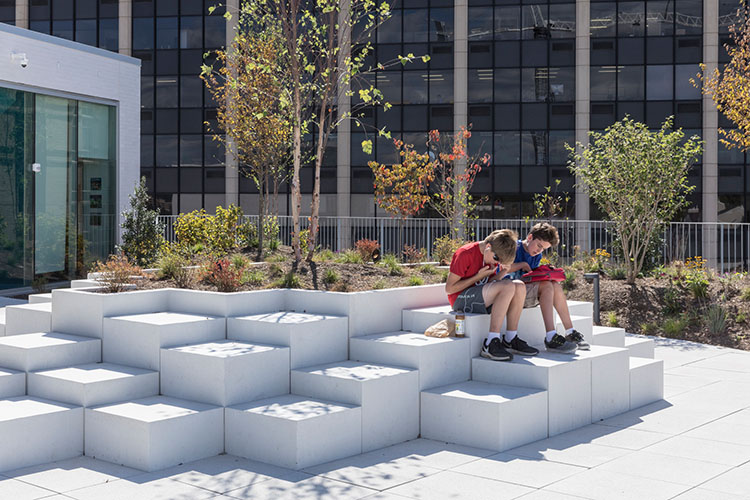 A rotating central staircase cuts through the interior of the building to connect the four-tiered terraces, allowing students to circulate outside and forge a stronger bond between the neighborhood and the school. While the upper terraces are more suitable for intimate classes and quiet study areas, the spacious first terrace and 18,700sf recreation field also serve as public event venues for school-wide and neighborhood activities. 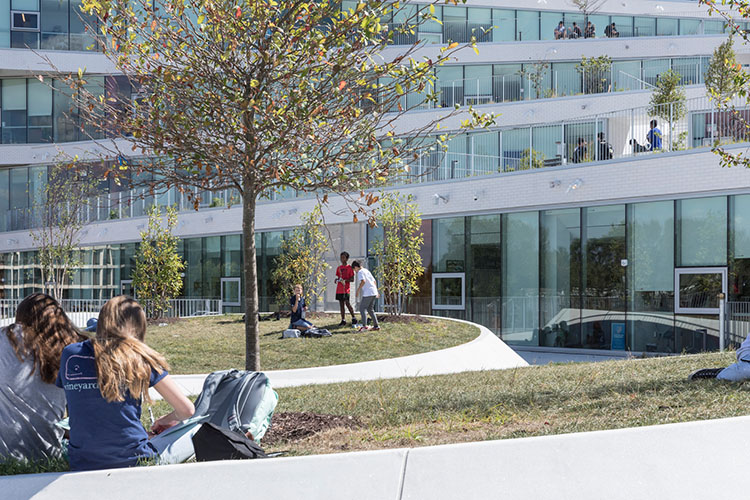 From Wilson Boulevard, students, teachers, and staff are greeted by a triple-height lobby with stepped seating that doubles as an indoor gathering space for both student assemblies and public gatherings. Many of the school’s common spaces, including the 400-seat auditorium, main gymnasium, library, reception, and cafeteria, are centrally located and directly adjacent to the lobby. 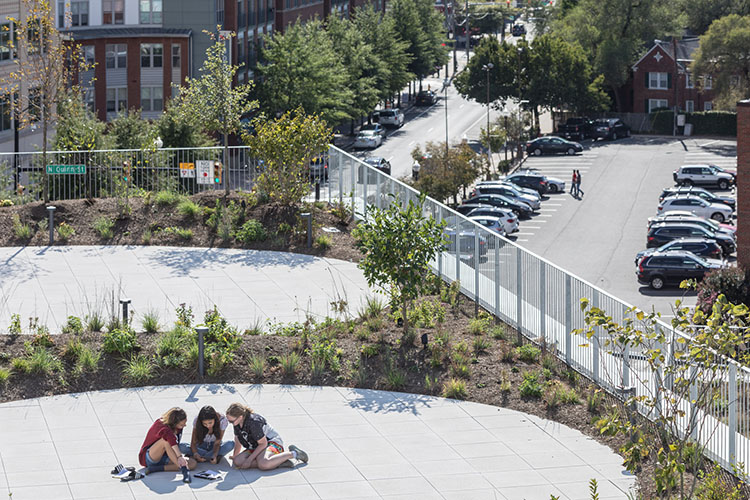 Easy accessibility to the community-oriented programs hosted in the school encourages public interaction throughout the building, creating a welcoming environment while heightening the visual connectivity between the shared spaces. Other specialized student spaces include an art studio, science and robotic labs, music rehearsal rooms and two performing arts theaters. 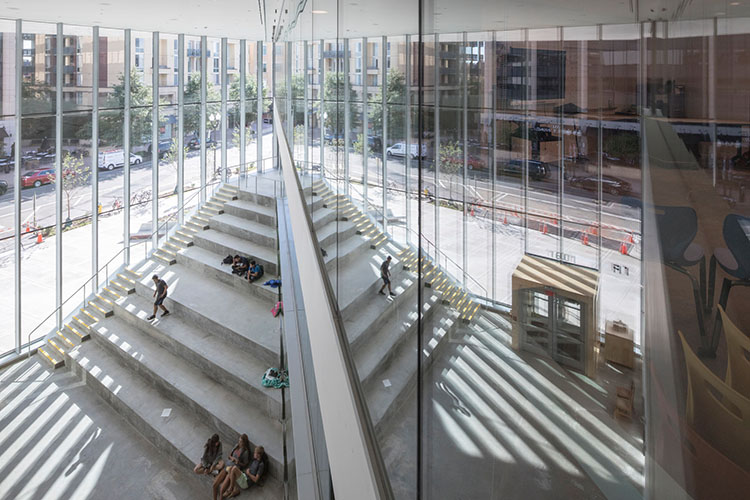 The classroom bars serve as the primary organizing elements, surrounding a central vertical core that contains the elevators, stairs, and bathrooms. As students enter from the central staircase, they are greeted by an expanded gradient of the color spectrum: each classroom bar is defined by its own color, combining intuitive wayfinding with a vibrant social atmosphere from the ground to the sky. 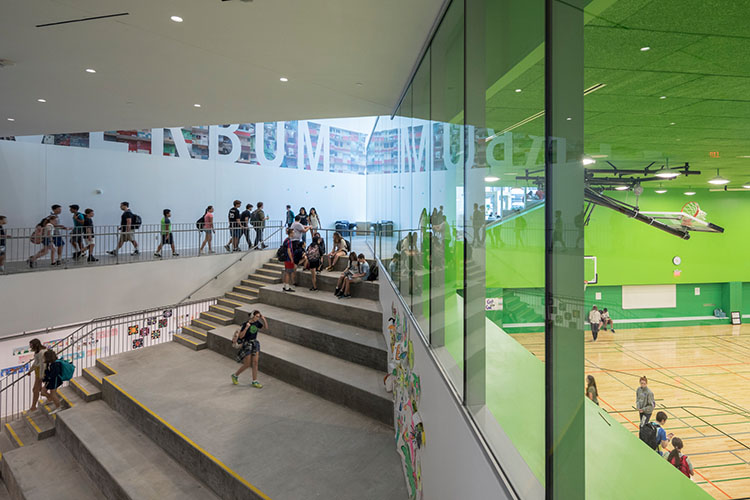 The Shriver Program providing special education for students aged 11 to 22 occupy two floors of the building accessible from the ground floor, and have specialized spaces dedicated to support APS’ Functional Life Skills program as well as privacy and ease of accessibility: the gymnasium, courtyard, occupational physical therapy suite, and sensory cottage are designed to aid in sensory processing. 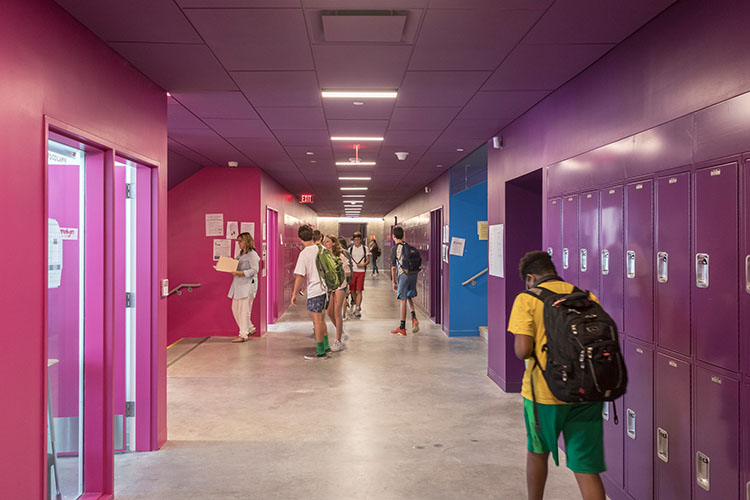 The Heights’ exterior is materialized in a graceful white glazed brick to unify the five volumes and highlight the oblique angles of the fanning classroom bars, allowing the sculptural form, the energy and the activity of the inside to take center stage. In keeping the surrounding neighborhood and former Wilson School in mind, the building’s material palette pays homage to the historical architecture of Old Town Alexandria.