Norwegian studio Rever & Drage has designed a detached house for a young couple in Sunndal, in rural Norway, who wanted a small home with a limited budget. At the same time, they envisioned that their family would grow and they, therefore, wanted the building to be easily expandable, depending on how life developed. The man wanted a romantic and cozy building while his wife, who is a deer hunter, wanted a building that was practical with room for guns and other hunting equipment. Both saw the need to think simple, especially due to economic concerns, but at the same time, they wanted to think about the future so there would be no big leaps for making changes as their family changed. 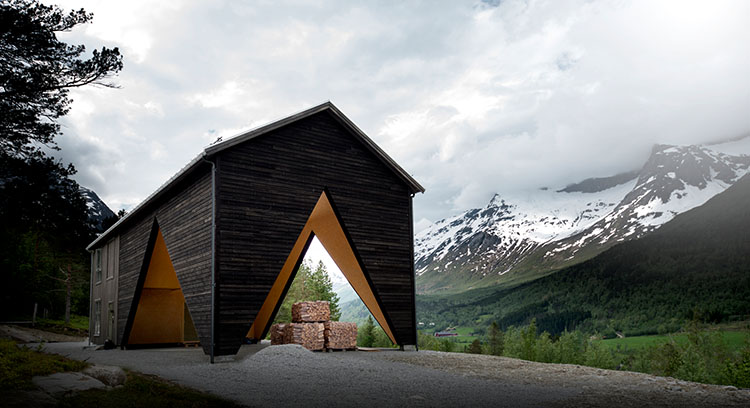 Rever & Drage’s design — named 1/3 House — comprises an insulated two-story building with a footprint of 50 square meters, and an uninsulated utility space that is about double in size. The former part responds to the need the couple has for living space today, and this area will probably be able to accommodate a family increase of one or two children. The latter part is the part that has the potential for expansion. In the meantime, the veranda functions as a storage room, garage, workshop, banquet hall and not least, as space for butchering deer. The windows in the insulated section are organized in a traditional way, albeit with a somewhat larger format than usual in such buildings, while the hall/veranda has a more industrial and temporary design. 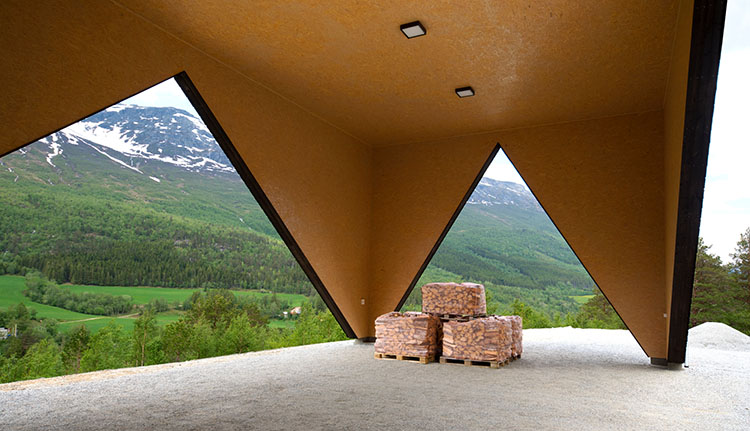 The simple economic concept is that the owners have now built the part that they could afford, while the rest has untapped potential for what life might bring. By completely extending the roof at the beginning of the project, they significantly reduce the work for adding space when needed, and they have the area under the roof as a resource in the meantime. 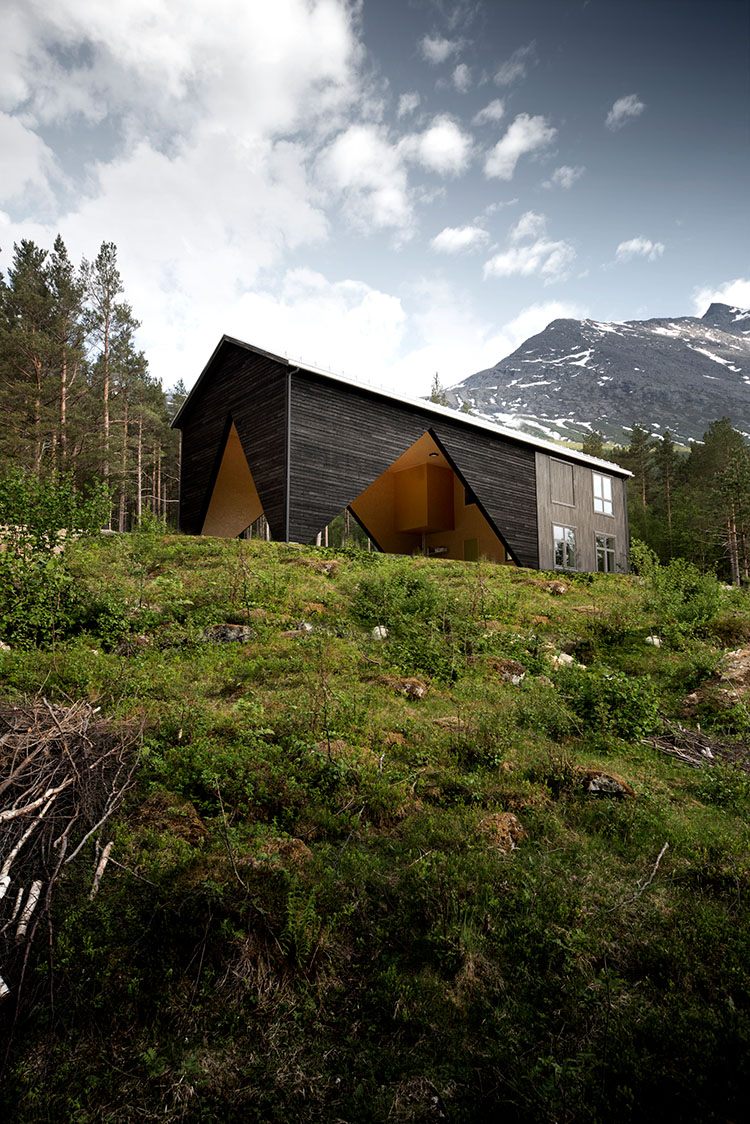 The floorplan of the insulated part is organized around a warm core on both floors.  On the ground floor the entrance, kitchen and living room encircle the laundry room, while on the second floor the storage space, bedroom, second living room, and TV room are arranged around the bathroom. The front door is facing the courtyard while the back entrance is from the hall/veranda via the laundry room. 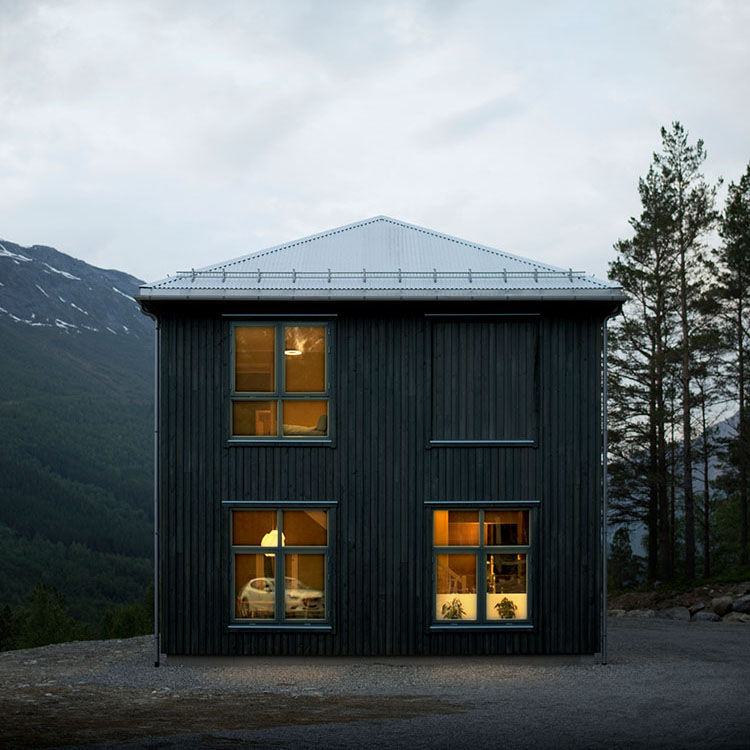 The roof over the utility space helps up by tilted glulam columns. These are built into the wall panels, but help define the openings towards the views of the landscape.  Under this roof you get an indoor/outdoor feeling – the space is both open and closed at the same time. Due to its expressive form, you also get a dramatic framing of views in different directions.  The utility space has a scale somewhere between housing and industrial, and the experience alternates between large and small. 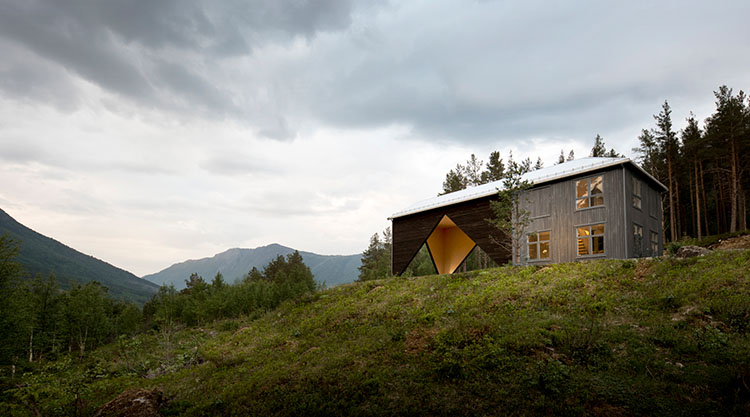 Because of the simplistic design, the building appears a little abstract. The similarity between the concept model and the finished building is striking. From the driveway, the building is dominated by the insulated part while the utility space disappears behind. Seen from the sides, the relationship between the two is fairly balanced – one is big and lights while the other is small and heavy. 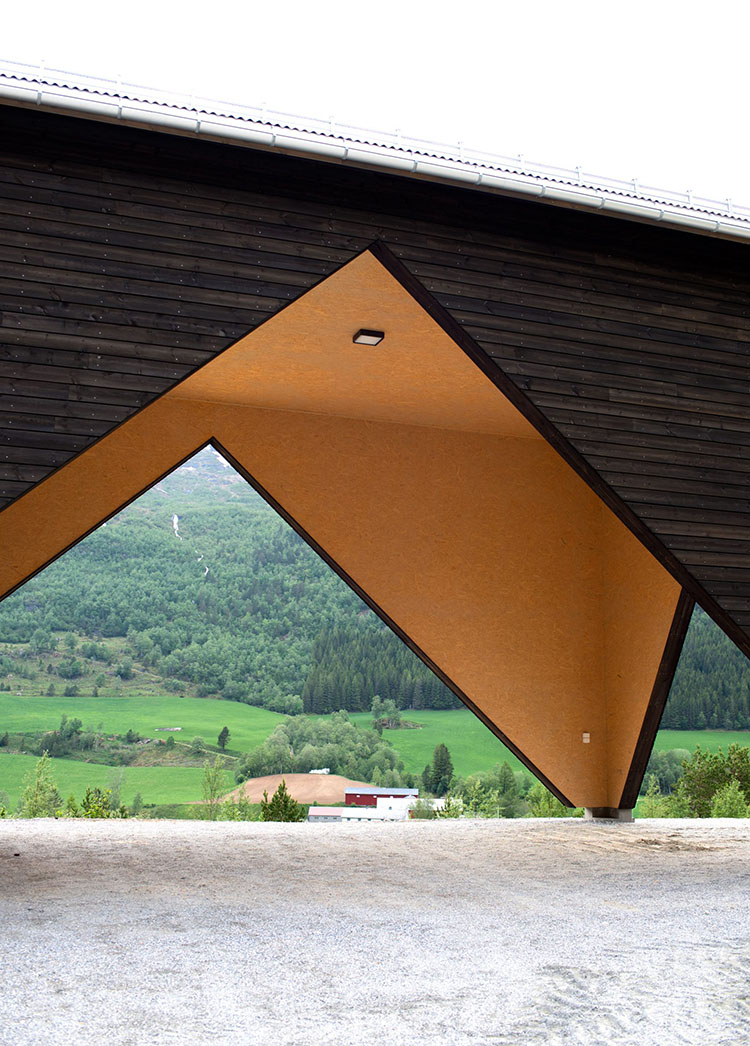 One of the most interesting things about this building is that in the future it may end up resembling a completely traditional local farmhouse, once all the potential area has been converted. As such, something that started as an unusual building will gradually develop to become more traditional. The only remaining traces will be the tilted glulam columns from the former hall/veranda. These will be built into the exterior walls and only appear in the window openings, in a way reminiscent of the transept chapel buttress of Gloucester Cathedral.