Ministry of Design has created a co-living-space, which occupies a traditional shophouse in Singapore, which provides shared accommodation for creative locals and members of the ex-pat community. Blurring the boundaries between space and object, MOD conceptually blanketed Canvas House with a layer of white that provides a canvas for the future, whilst revealing historical preservation in concentrated spots.

Historic dwellings like conservation shophouses are repositories of memories, with previous lives and a past of their own. Ministry of Design explores history and our relationship with the past, present and future through the concept of layers in Canvas House at Blair Road. 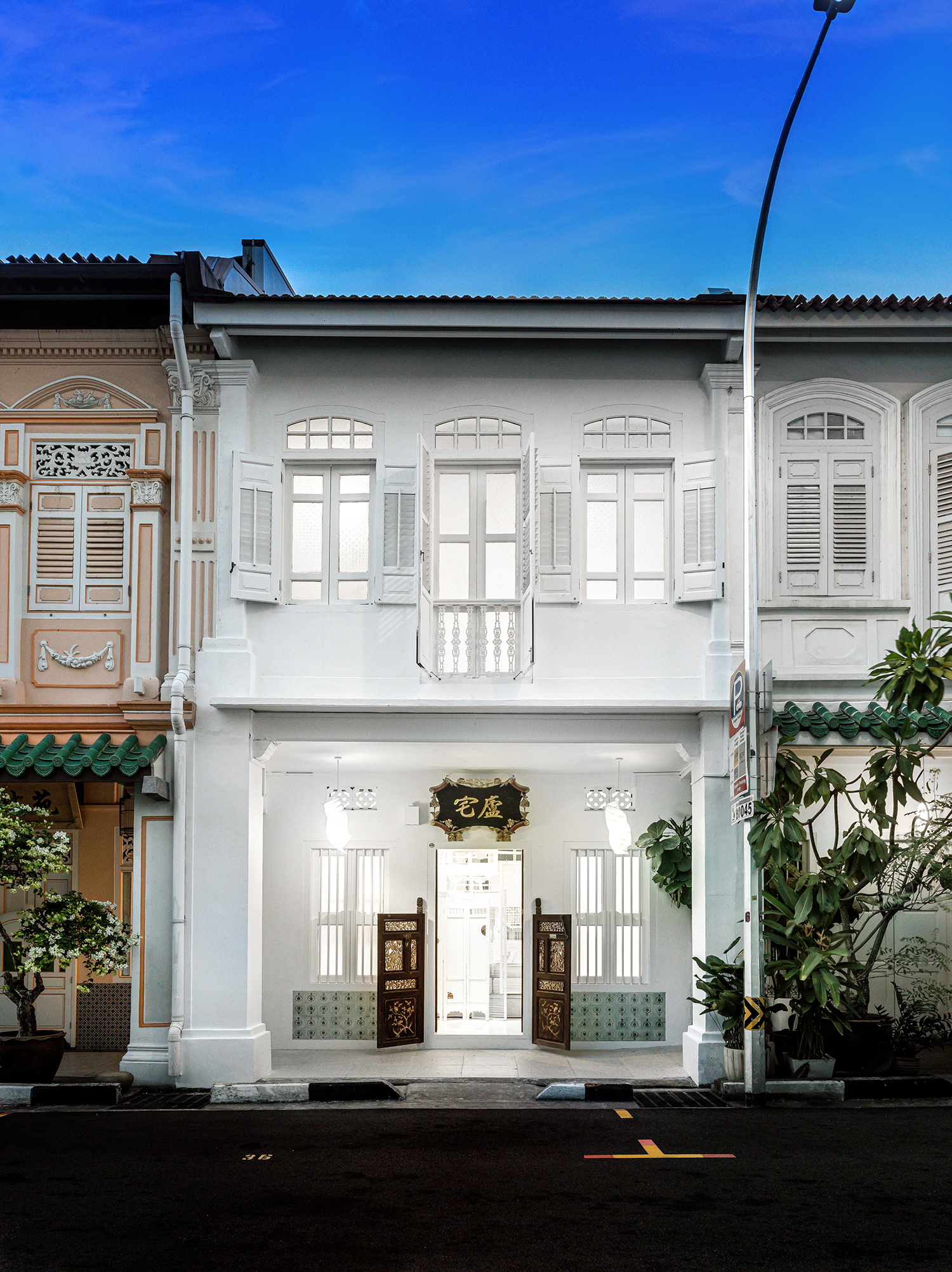 “When it comes to adaptive reuse projects, the question is always the same, how do we tread the line between the past and the present? If one opts for the project to be just about preservation, it’s as good as time standing still… which could be paralysing and inhibiting But at the same time, neither do we want to disregard history completely by creating something too foreign or novel,” says Colin Seah, founder of the studio. “Our response was to layer over the existing history with a proverbial blank canvas whilst leaving choreographed glimpses into the past, blanketing both space and the furniture in it – allowing us to blur the inherent boundaries between past and present, object and space.” 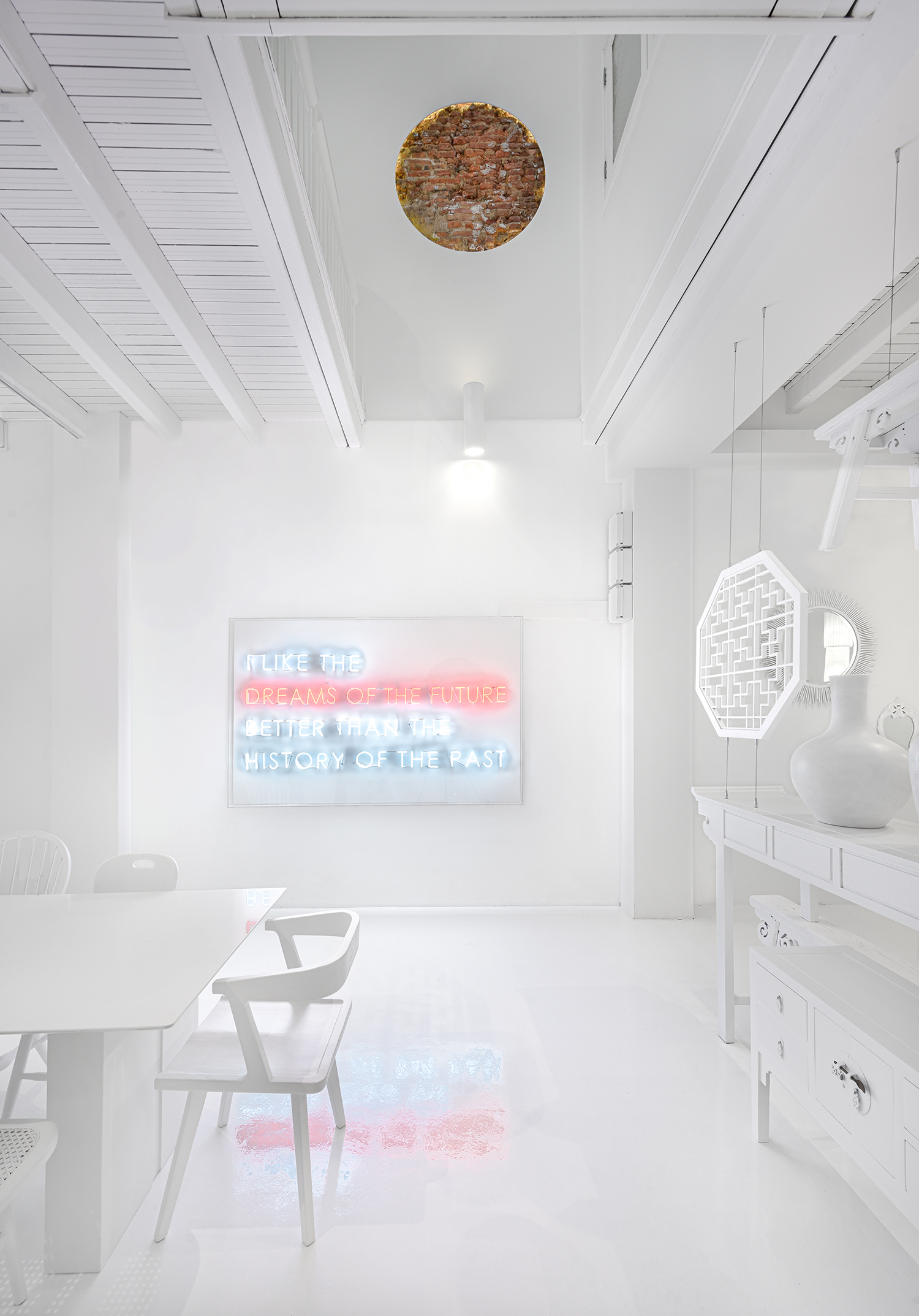 To present this spatially, Ministry of Design created a text-based neon art piece, featuring a quote by Thomas Jefferson that encapsulates MOD’s approach to Canvas House. The quote summarizes the attitude of the house, quoting Colin, “it is a neutral white canvas for the future to be dreamt upon, rather than a wholesale homage to the past.” Fabricated by The Signmakers, the quote is penned in a single-stroke white and red glass neon, and encased in an aluminum box. 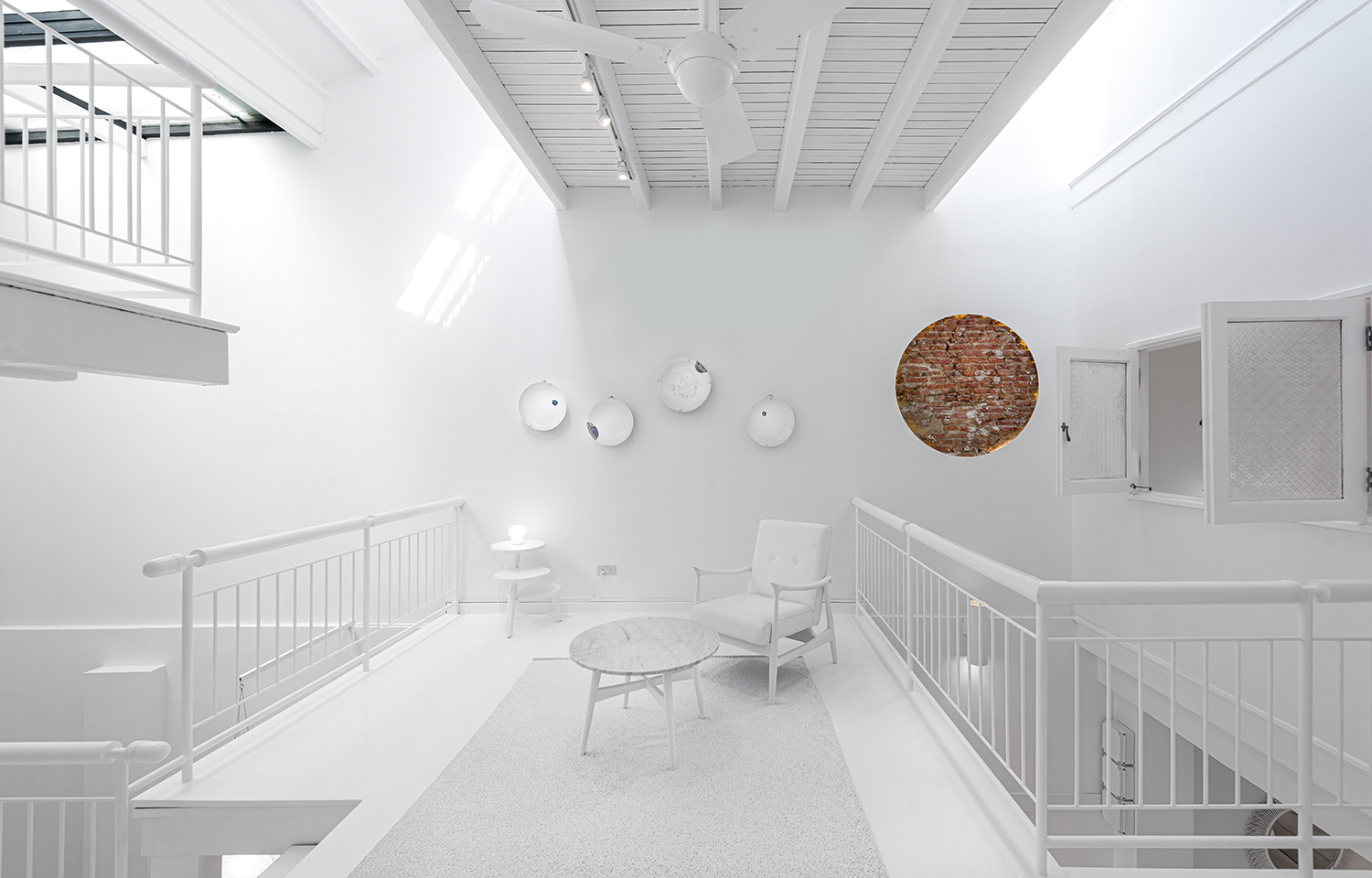 In a sense, the white blurs the distinction between new and old; it also blurs the distinction between the spatial elements (e.g. walls, ceiling), and the objects that sit within it (e.g. the furniture and lights). With everything white, object/space dichotomy is blurred. The house becomes more whole rather than a space populated by objects and people that move in and out. That allows the people using the space, to truly activate the space, and be the prominent features instead of merely inhabiting space. 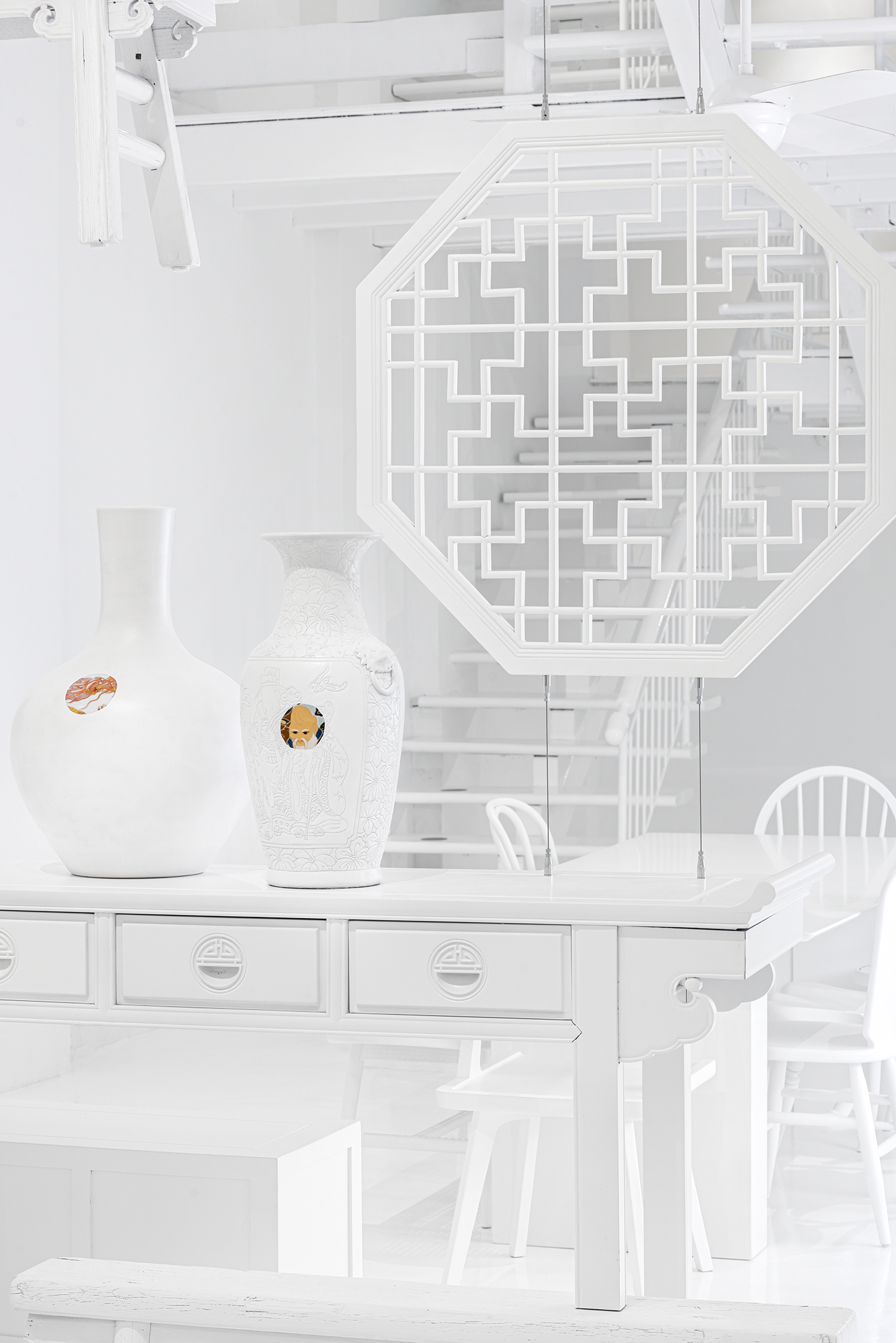 Parts of the past are rhythmically revealed throughout the space, with Layers of revealed brick and intricate details of pre-owned furniture, and Shadows of old timber. This technique is applied to a variety of places, including round timber reveals on the stairs throughout the four-story house, and playful peek-a-boo reveals of vignettes on decorative dragon or longevity vases, vintage ceramic plates hung on the wall, and wooden screens, vanity dressers and chairs. 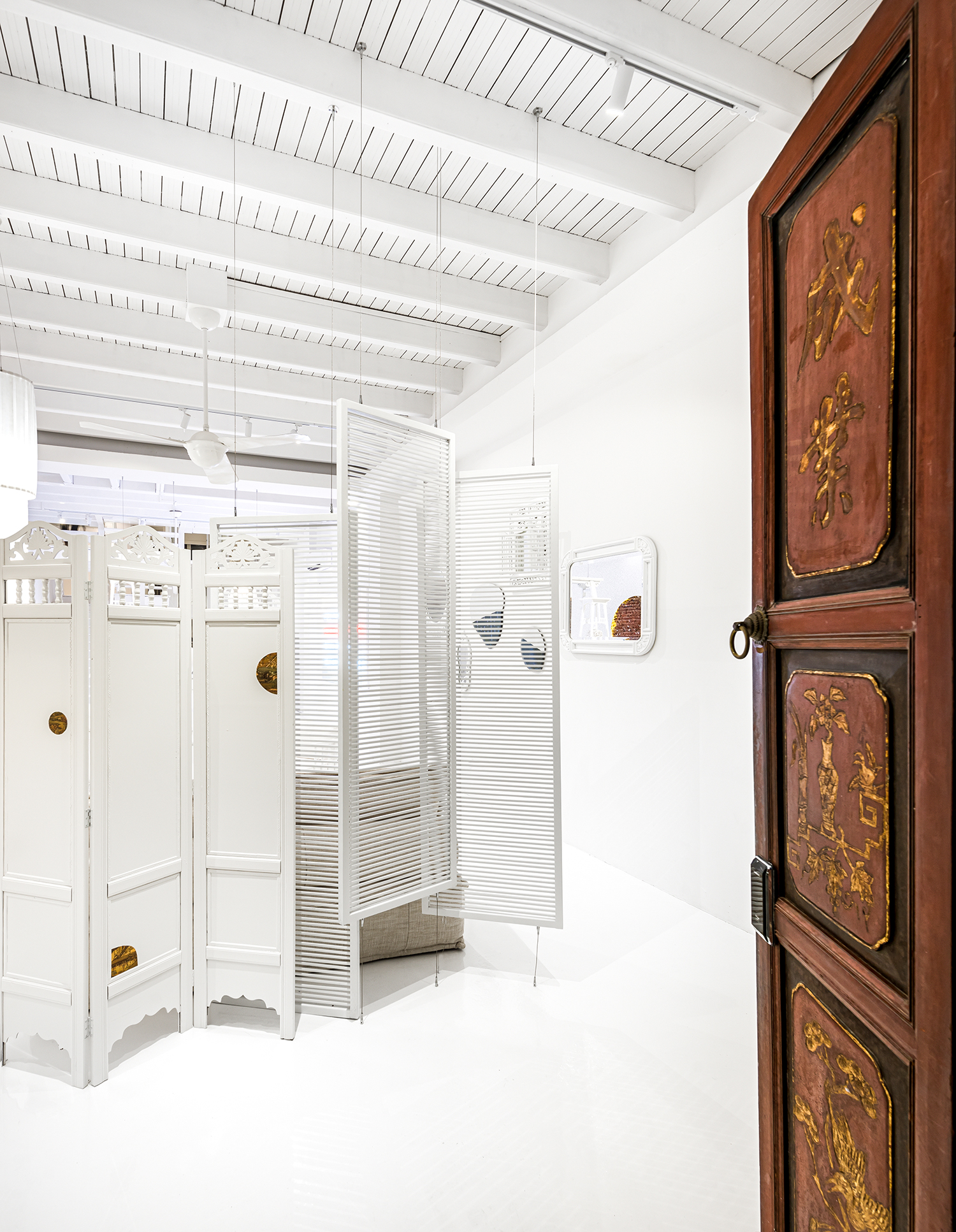 Historic details are preserved in a similarly conceptual fashion, where brick walls are revealed in concentrated circles. In the suites in particular, visitors will see “time shadows” cast by the beds, which reveals the underlay of the floor. Working with our builder, we marked out the outline of the afternoon-sun shadow and had the painter paint around this outline, allowing the mark of time to cast its mark on the ground. 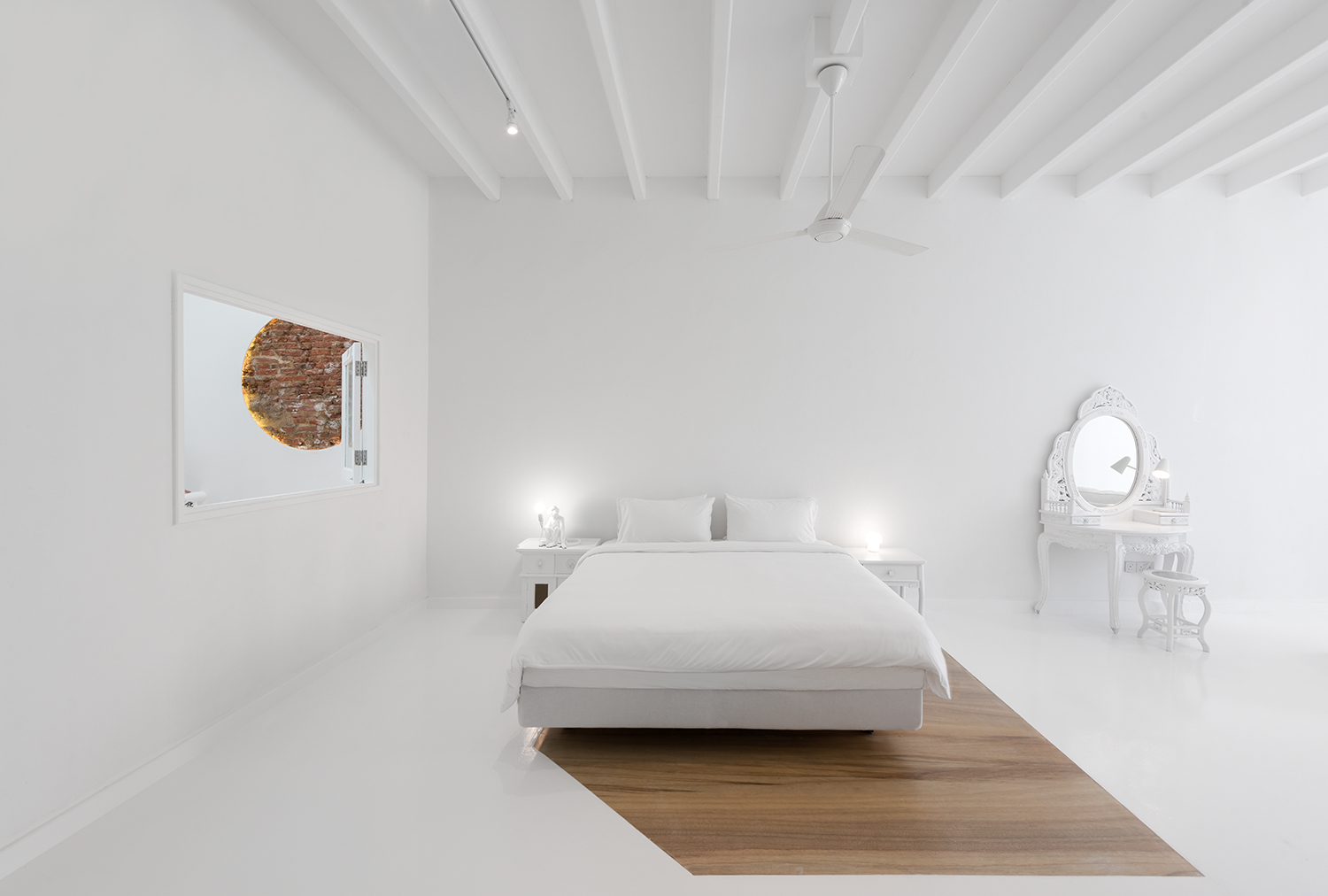 MOD collaborated with Kang, an artist who specializes in upcycling and working with fused plastic to craft fashion accessories, to produce his first series of lights. Part of MOD’s incubation programme, Kang works from the MOD office to craft his materials. MOD collaborated with Kang to create 3 sets of luminaires with fused plastic made from cling film, placed at the five-foot-way, the living and the atrium areas. Keeping to the theme of layers, the cling film was layered and then ironed and heated to create a waterproof, leathery material.