In Toronto’s historic neighborhood of Baby Point, Batay-Csorba Architects have completed the renovation and extension of an Arts and Crafts home. The Baby Point district is currently under study as a heritage conservation district in Toronto. Occupation of this area dates to 6,000 BCE, and it is believed that the area was permanently settled in the year 1673 as the village of Teiaiagon, which translates to ‘it crosses the stream’.

By the early 1820s, prominent French-Canadian merchant James Baby had bought 1500 acres of the land for his estate. It was known to have apple orchards and salmon swimming along the Humber river. Baby’s heirs continued to occupy the land until the government acquired it for military purposes in 1910. 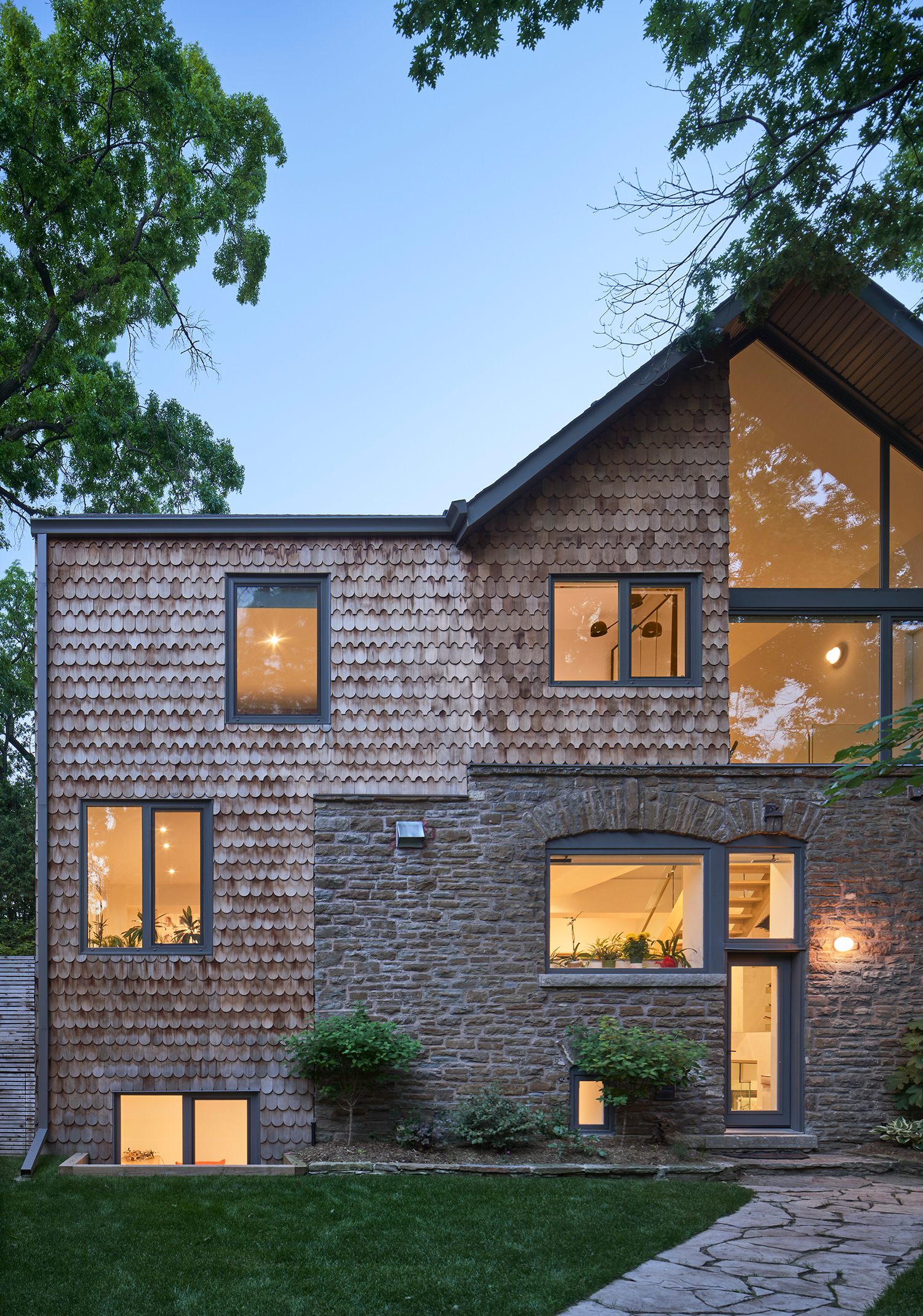 The Government had changed its plans to develop it into army barracks, and instead sold the land to developer Robert Home Smith. His garden suburb was developed in 1912 and was marketed as “a bit of England far from England”. This period was marked by a fascination with Medieval Revival, and the Arts and Crafts movement, so many of the initial homes built in the neighborhood were in the English Cottage or Tudor Revival style. Home Smith had strict rules about the standards of the neighborhood, where the plans of every new home needed to be approved by his architects. His development ensured the natural topography of the land was maintained to create picturesque settings for each home. Also, with each house sold, the purchaser had to sign an agreement that the integrity of the designs would remain intact for 30 years. 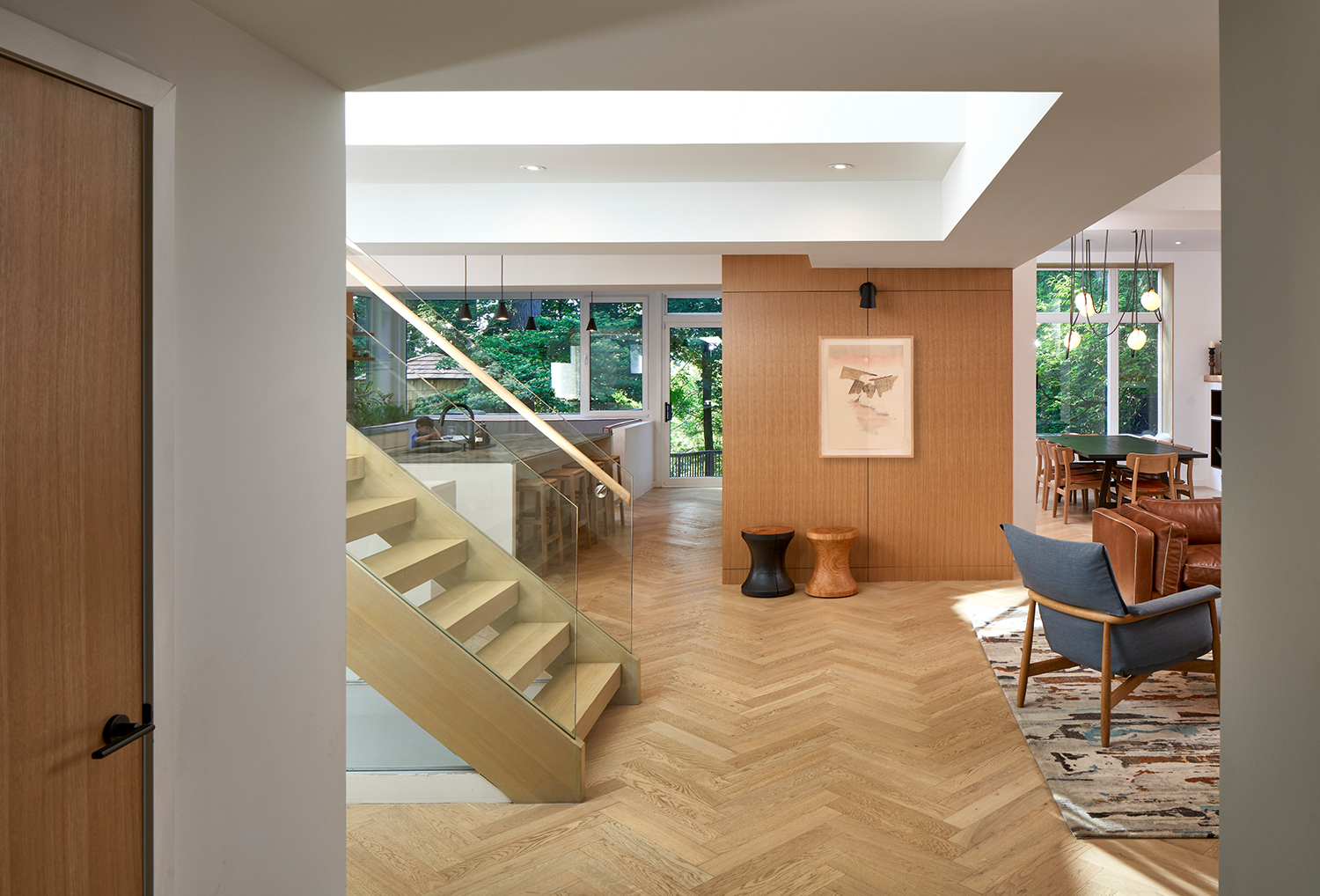 Now 100 years passed, the purchaser agreements have been lifted and the heritage status of the neighborhood is still under study. The clients for Baby Point Residence had interest in the Arts and Crafts movement, and preserving neighborhood character, so the architects worked to understand the underlying principles of the movement. Beyond Medieval motifs, ornamentation, and a nostalgia for handcraftsmanship, they also interpreted the Arts and Crafts movement spatially. They understood it to be about creation of immersive and enveloping spaces through rich, warm materials and tones and the overall sense of weight; also, organization of an open floor plan into intimate sub-spaces each organized around a specific activity and articulated through furniture built into a thickened wall. 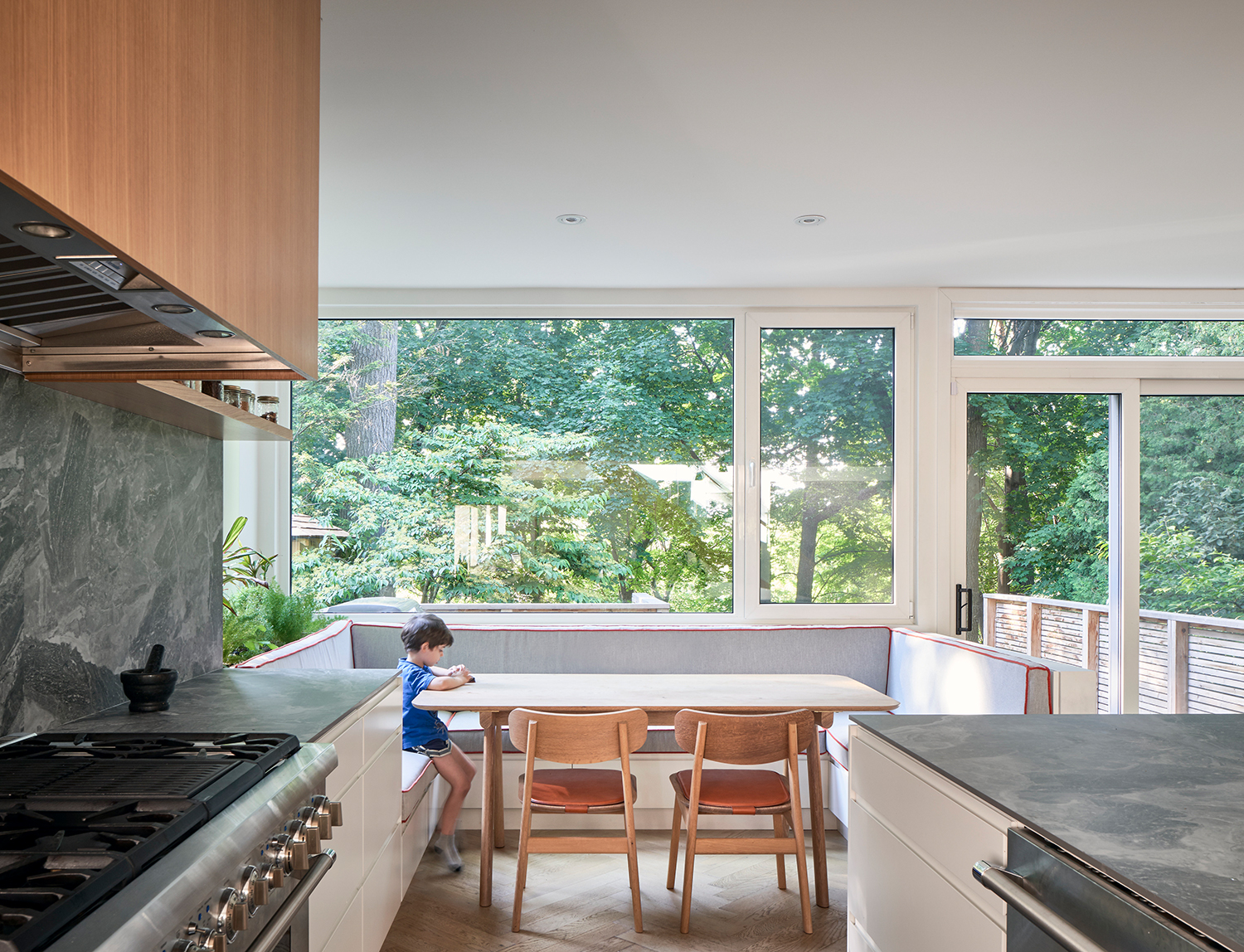 Most of the house’s original exterior of stucco and stones from the Humber river has been kept intact. The architects focused on opening views to the back ravine by cutting a large double height slice in the west side of the home, adding an additional peak to the back façade. The interior of the house was originally subdivided into small rooms, and with slicing through the home they opened all floors, letting light flood through the space. 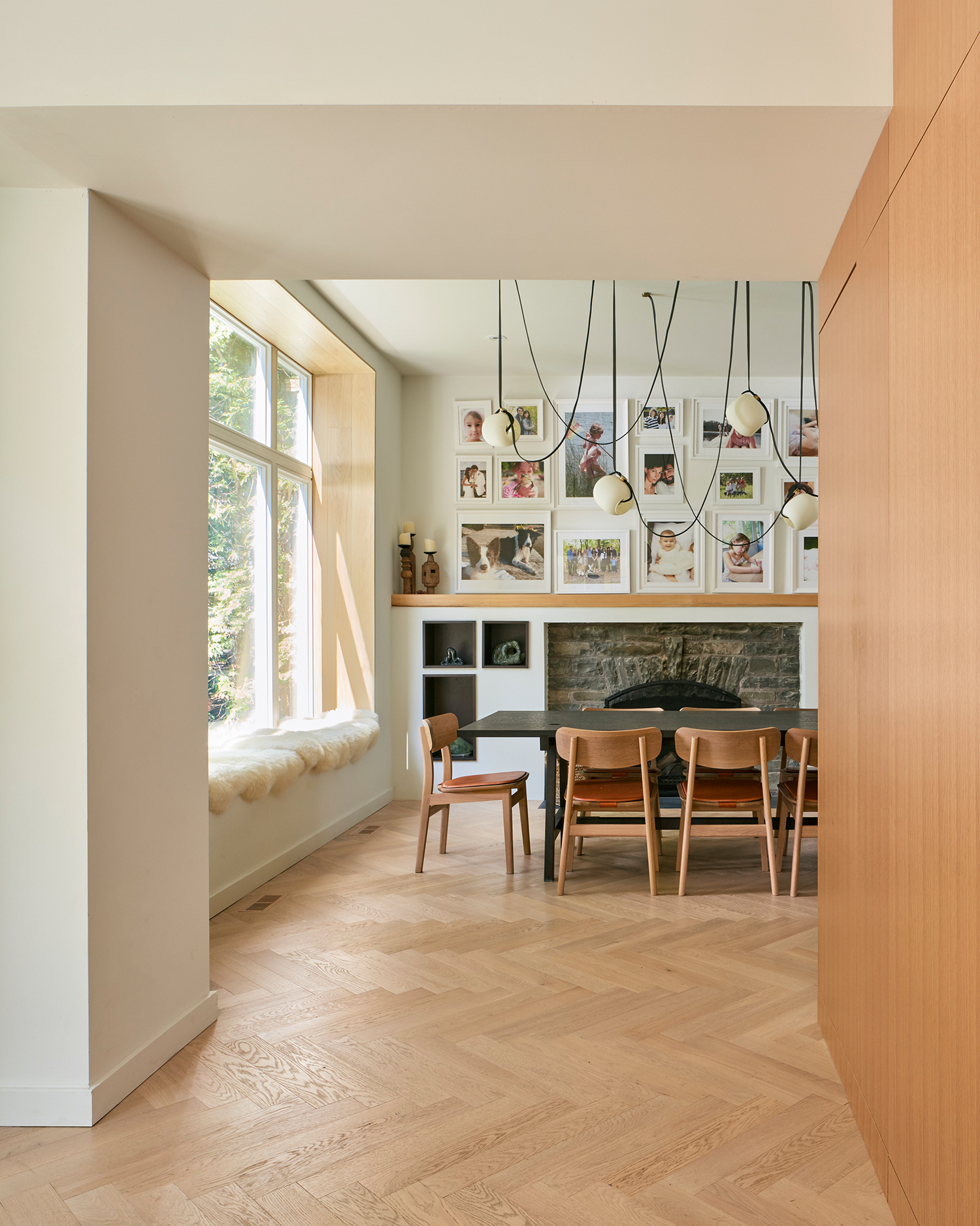 The main floor is now centered around a built-in storage piece, which acts as a heavy mass in an open plan. On the kitchen side it provides pantry, fridge and a coffee bar; and a bar nook on the dining side. All the windows are thickened and clad in wood to create opportunities for comfy seating, and different programmatic zones are created in the floor plan through a thickening of the bulkheads.

Custom furniture in the house was built by local Toronto designer Heidi Earnshaw. Since her practice focuses on re-imagining historical types of craftsmanship in a contemporary context, furniture such as the breakfast banquette helped to create the warmth and the attention to detail reminiscent of the Arts and Crafts aesthetic. 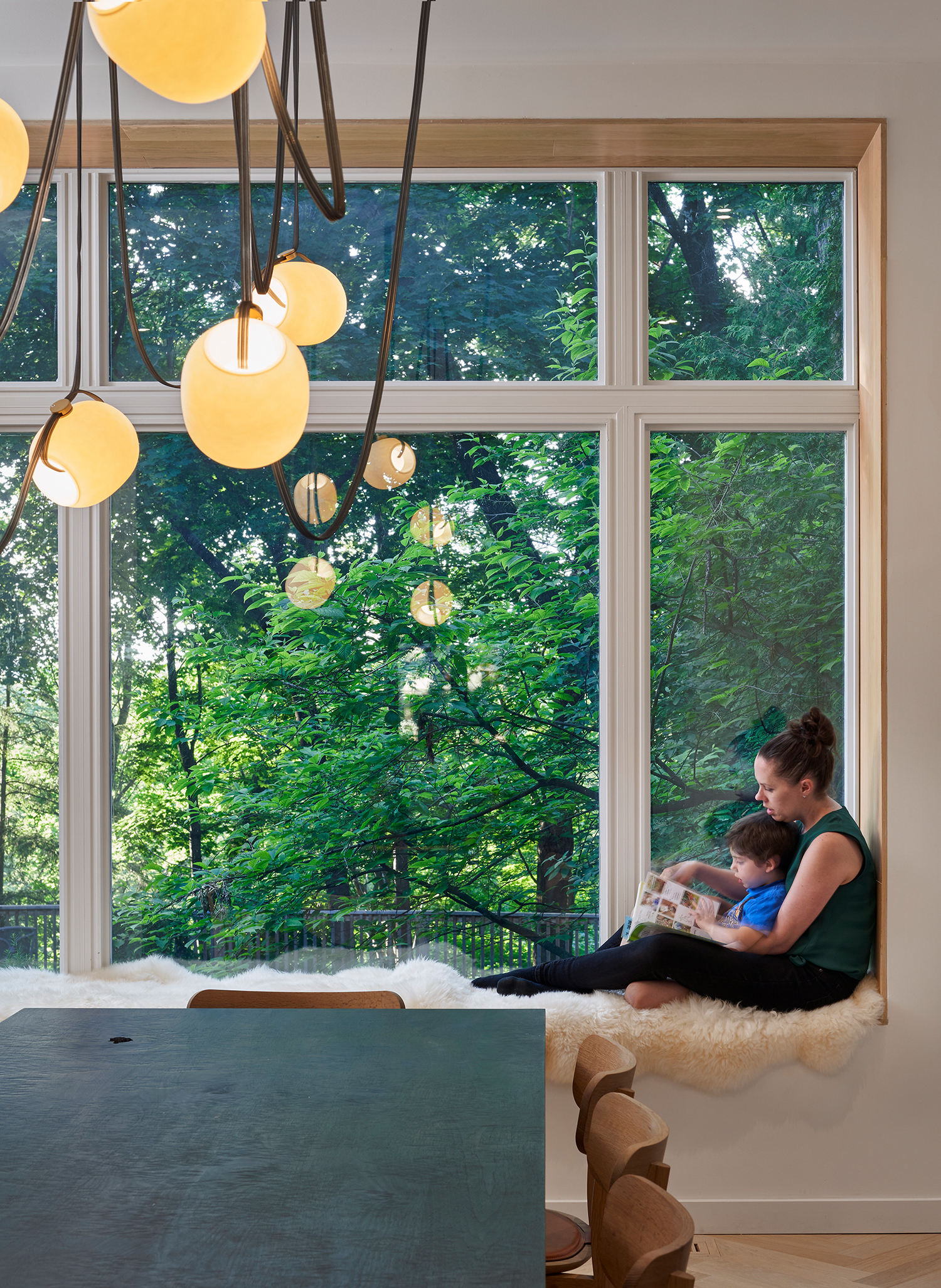 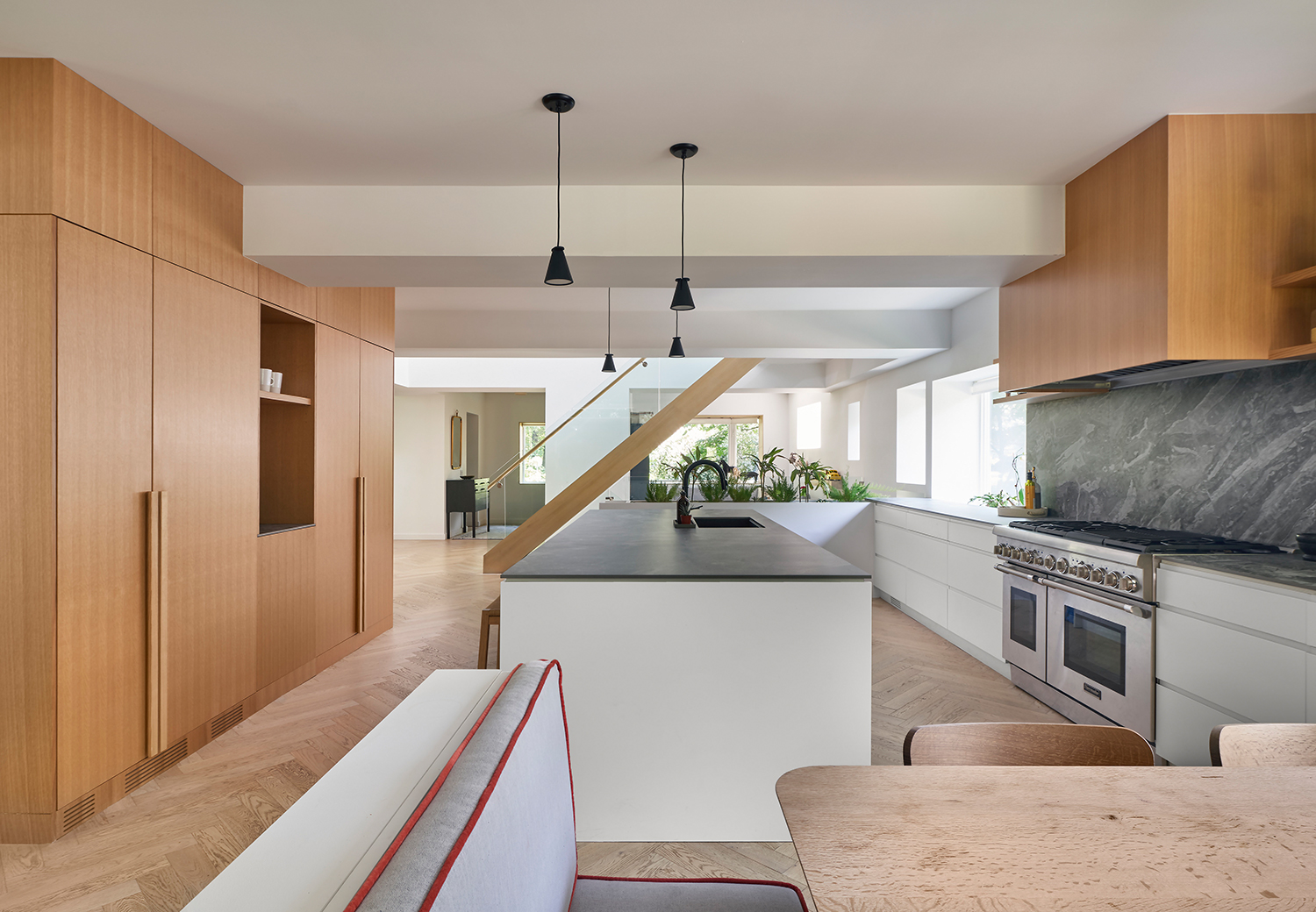 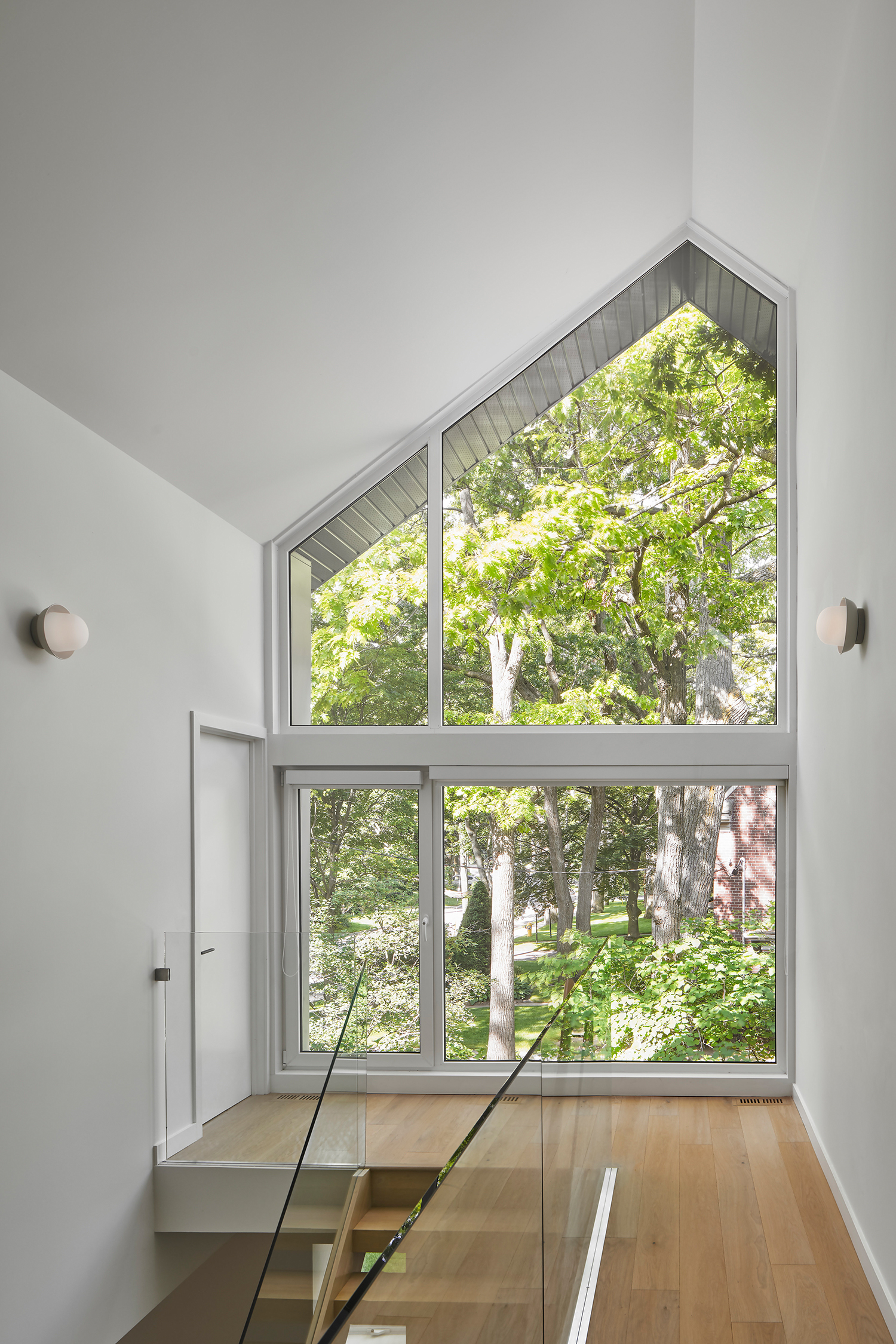 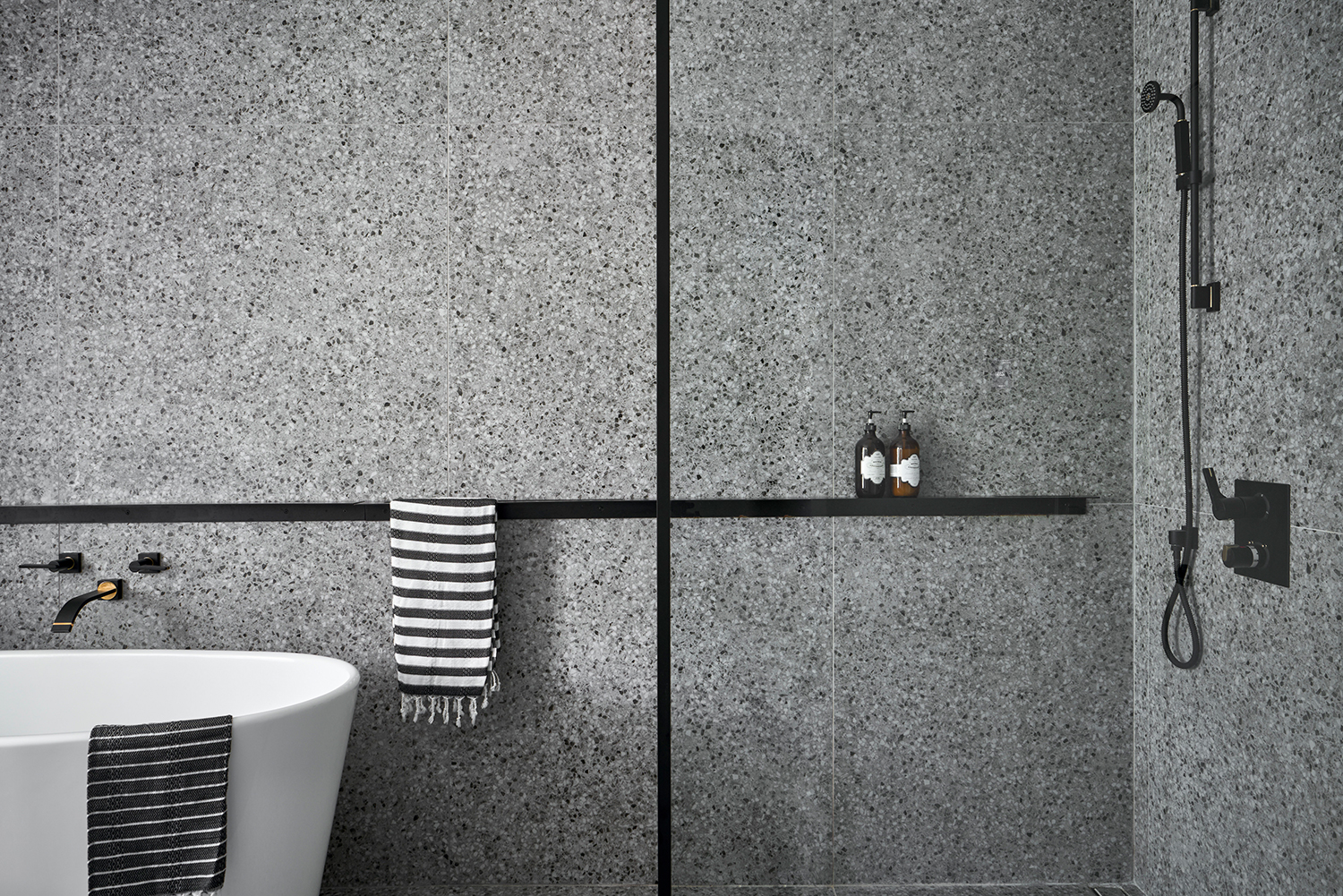 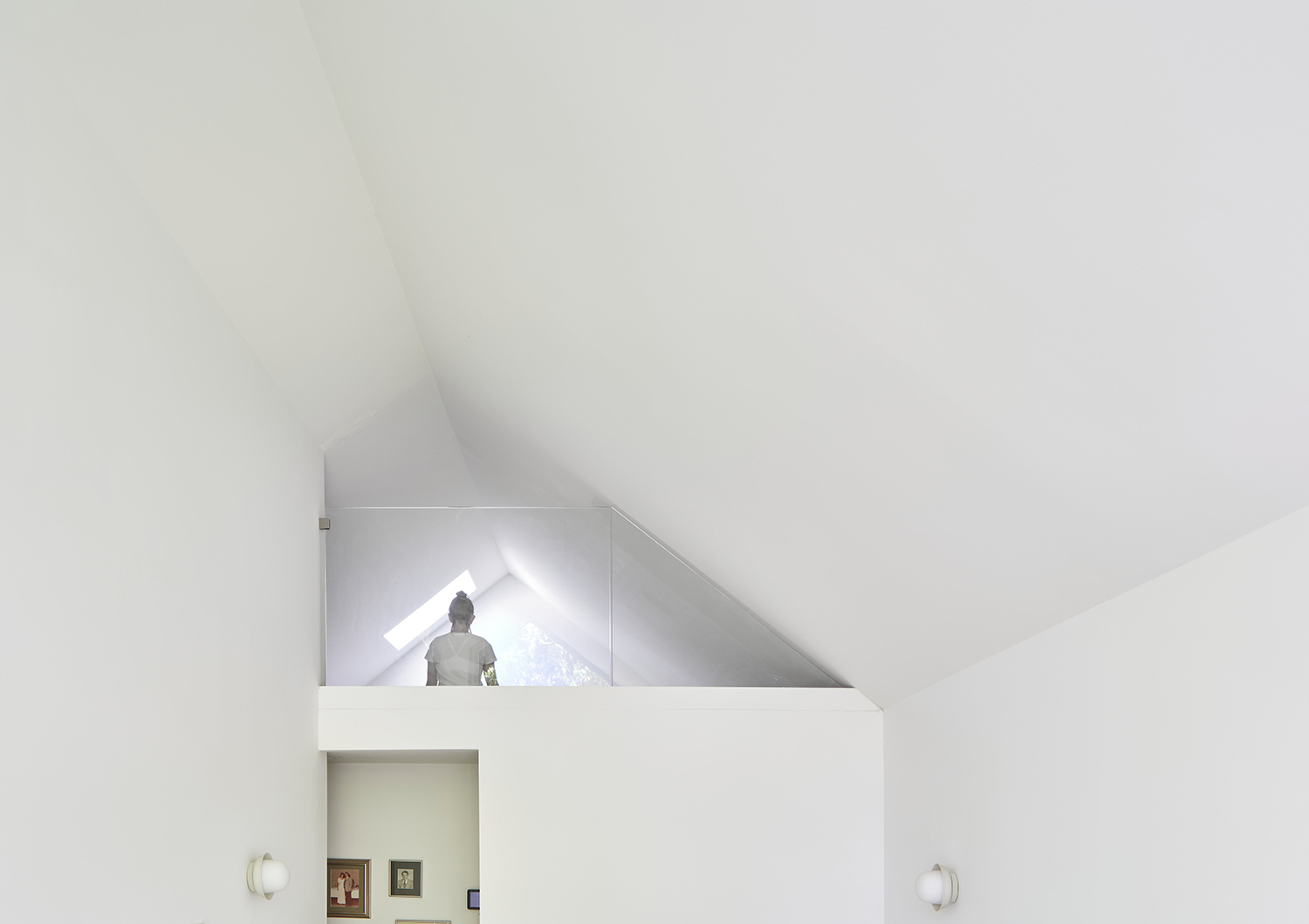 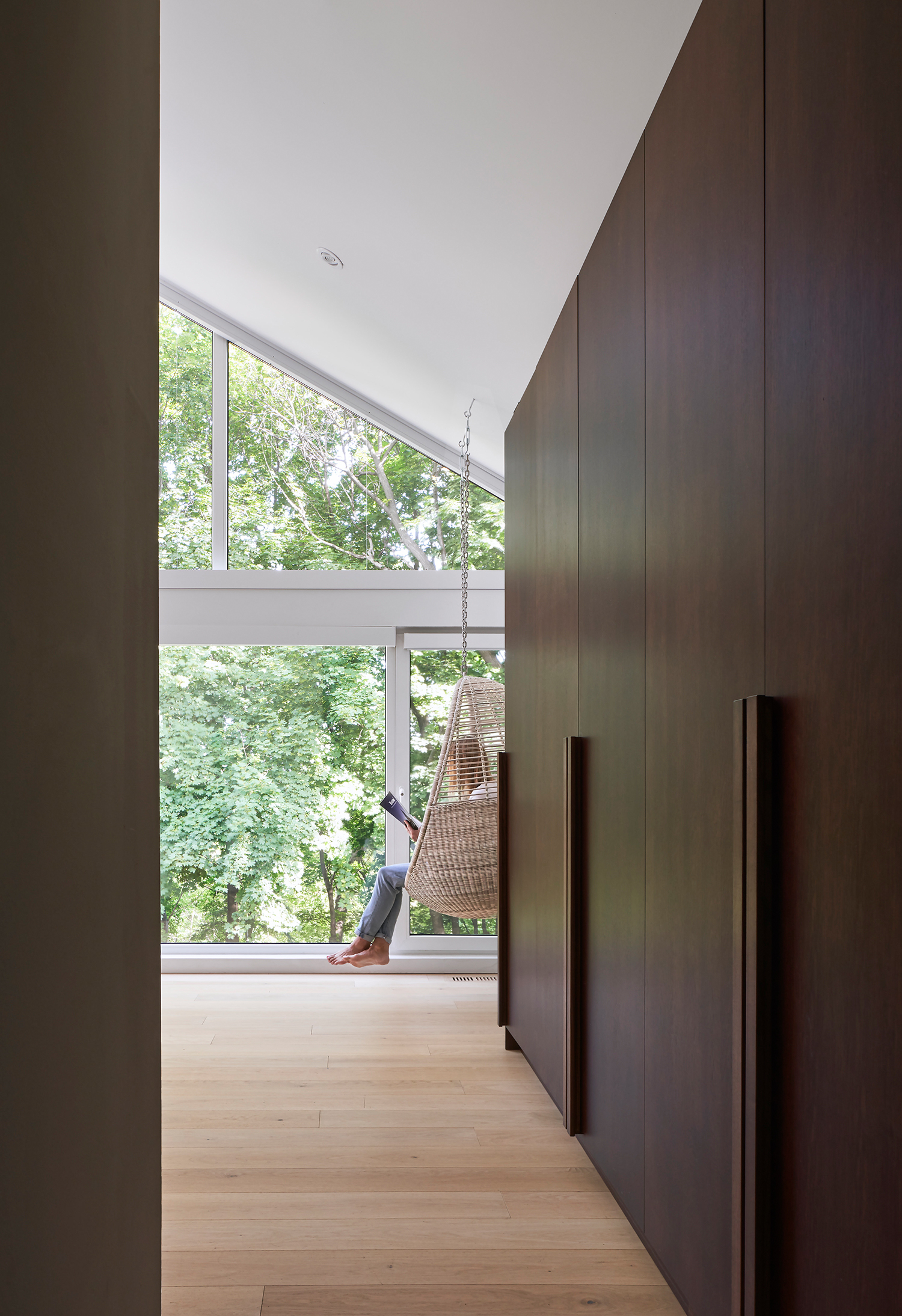