Located in Haras Santa María de Escobar, a gated community 54 km away from the center of Buenos Aires, the Escobar House is a monolithic weekend residence design for a young couple by Luciano Kruk.

The residence was designed primarily as a weekend house, however, the client would also use it as a permanent residence in the interim. The site of Escobar House is characterized by its plain topography and boasts incredible views from the rear elevation out towards the vast golf green. To maximize this location, Luciano Kruk has elevated the social heart of the house from the ground to gain more impressive views over the site. 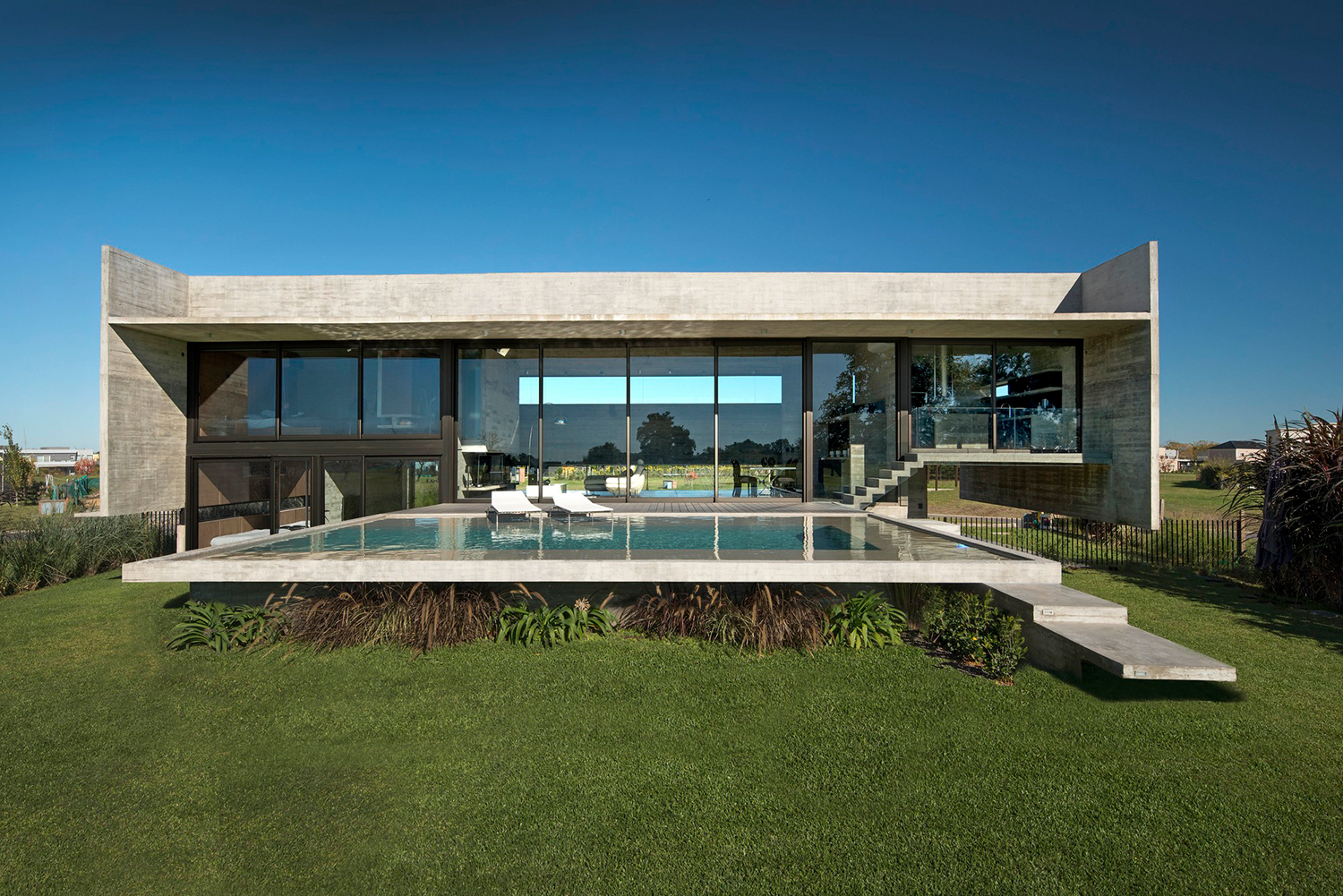 The program of the house includes an en-suite master bedroom and two secondary bedrooms for the client’s children. The brief requested that the living and dining area should open onto a semi-covered expanse, directly attached to a swimming pool. The couple also desired that the internal spaces be extended into the external environment, connecting the architecture to nature and affording spaces for contemplation.

“We proposed a house made of exposed concrete and glass, which don’t need much maintenance,” explains Luciano Kruk. “We intended to produce architectural synthesis regarding floorplan organization and unicity when it came to total morphology.” 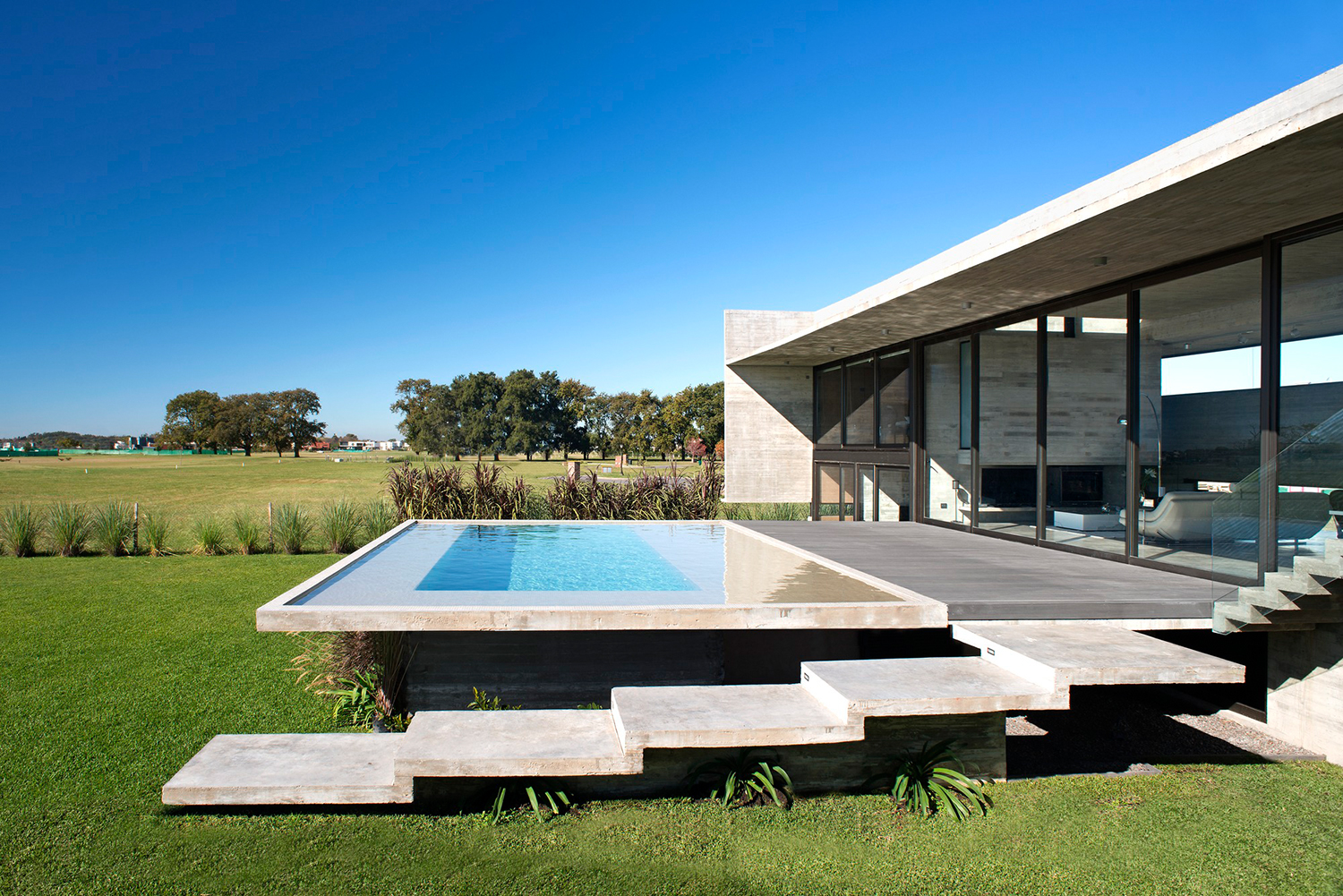 In developing the project, the studio aimed to create an overall synergy between the floor plan and the morphology of the building. To achieve this, Luciano Kruk began the scheme with the elevated platform, which contains the double-height entrance and main social area of the house. From this central point, the other remaining functions were then connected at half floor height at either side, resulting in the final building. 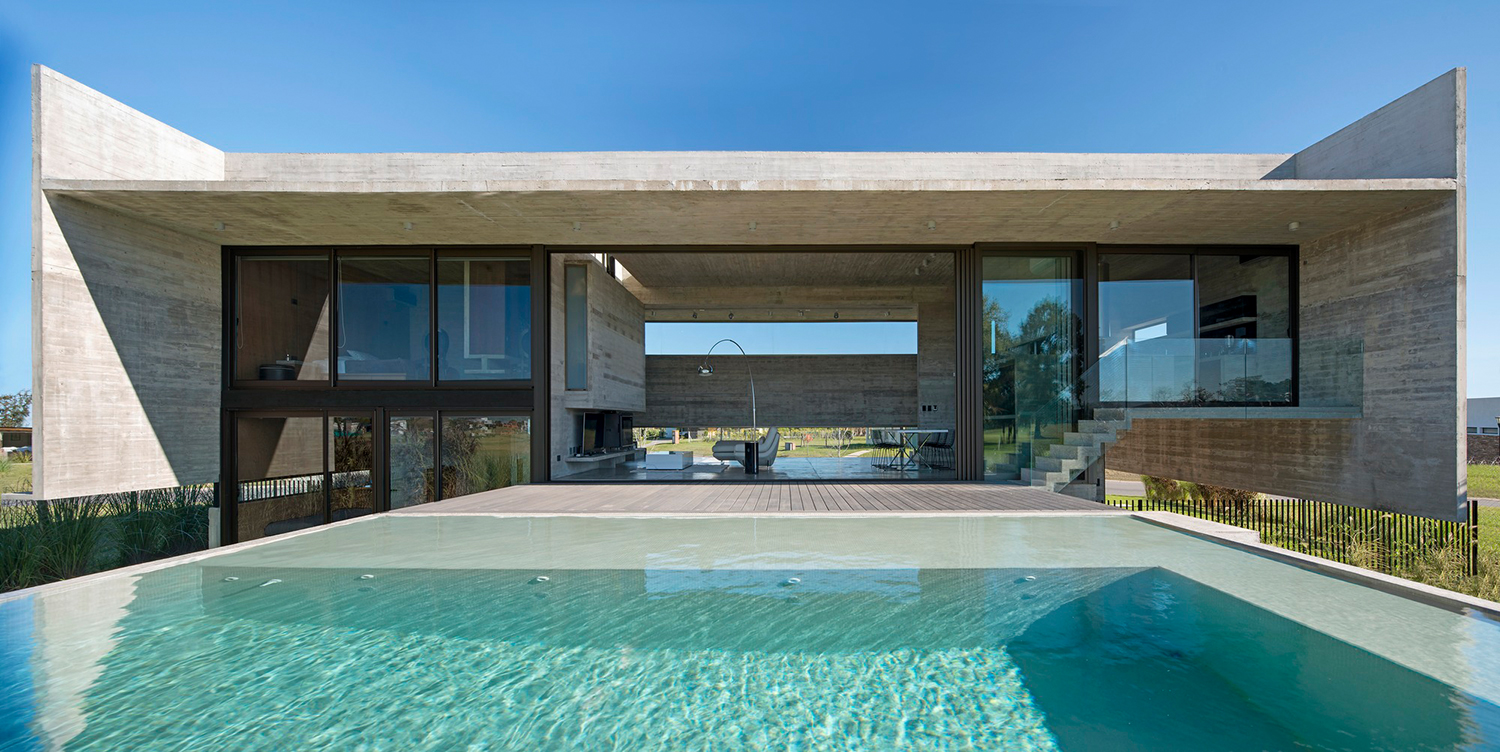 A circulatory and services corridor on the front of the house gives privacy from the street to the more private rooms, which are oriented in the opposite direction. Being almost blind towards the outside, this corridor opens through longitudinal cracks. Most of the house’s front is shut, whereas the rear connects fluidly with the outside through a completely transparent shell. 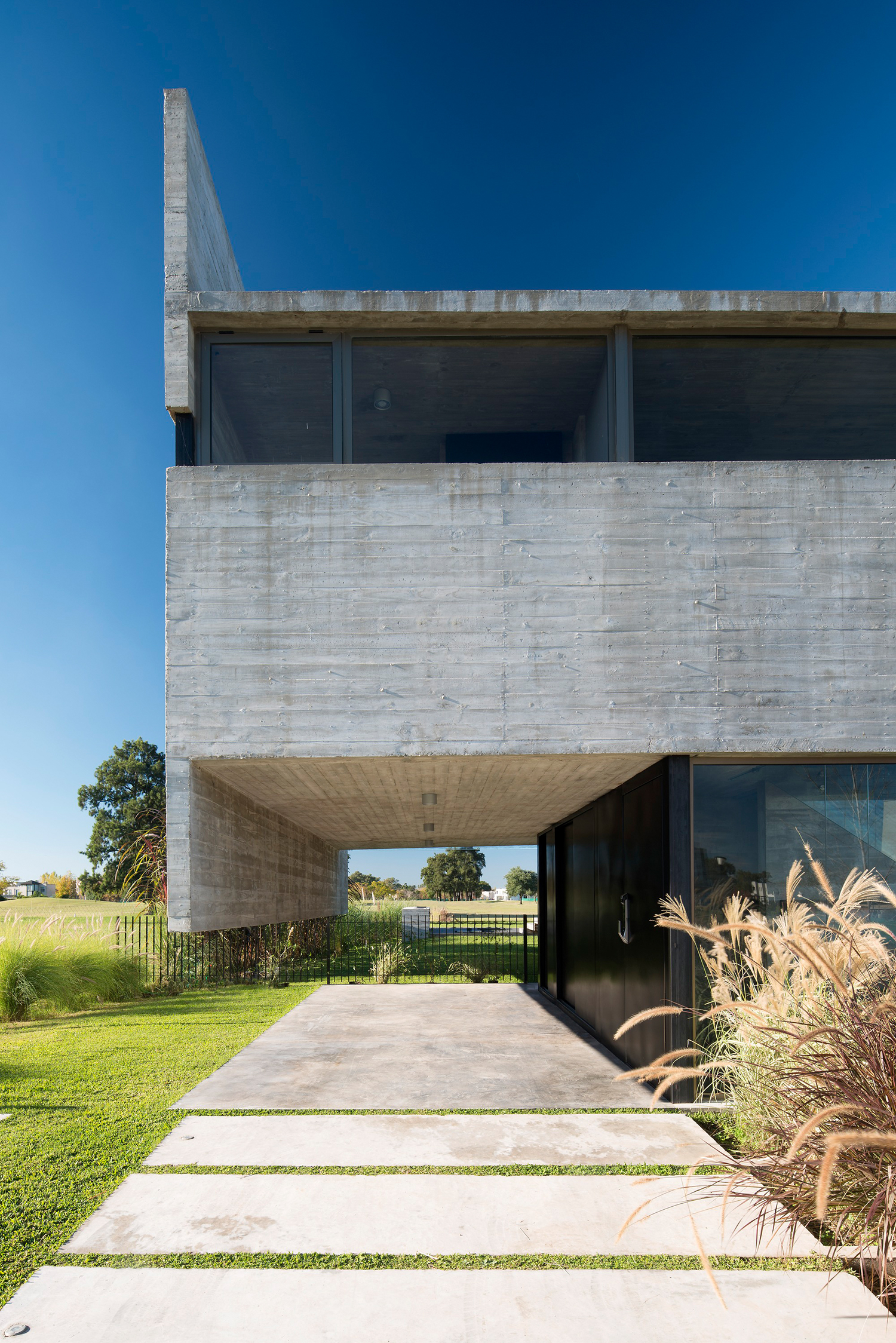 The house is made of exposed concrete and glass with the aim of reducing the need for maintenance. The supporting structure is organized around two parallel inverted beams running along the whole house. So as to visually emphasize the volume’s horizontality, these beams were set back from the closing shell, both at the front and the back. Lying according to the space’s interior organization, these structural stripes help arrange the service corridor at the front, the social areas and the semi covered deck at the back. Moreover, the views are framed into rectangles of apparent horizontality to project them towards the vegetation outside and the golf court at the back. With the same intention, lines of trees were laid out on the lot’s limits that would also give privacy to the house from the neighboring residences. 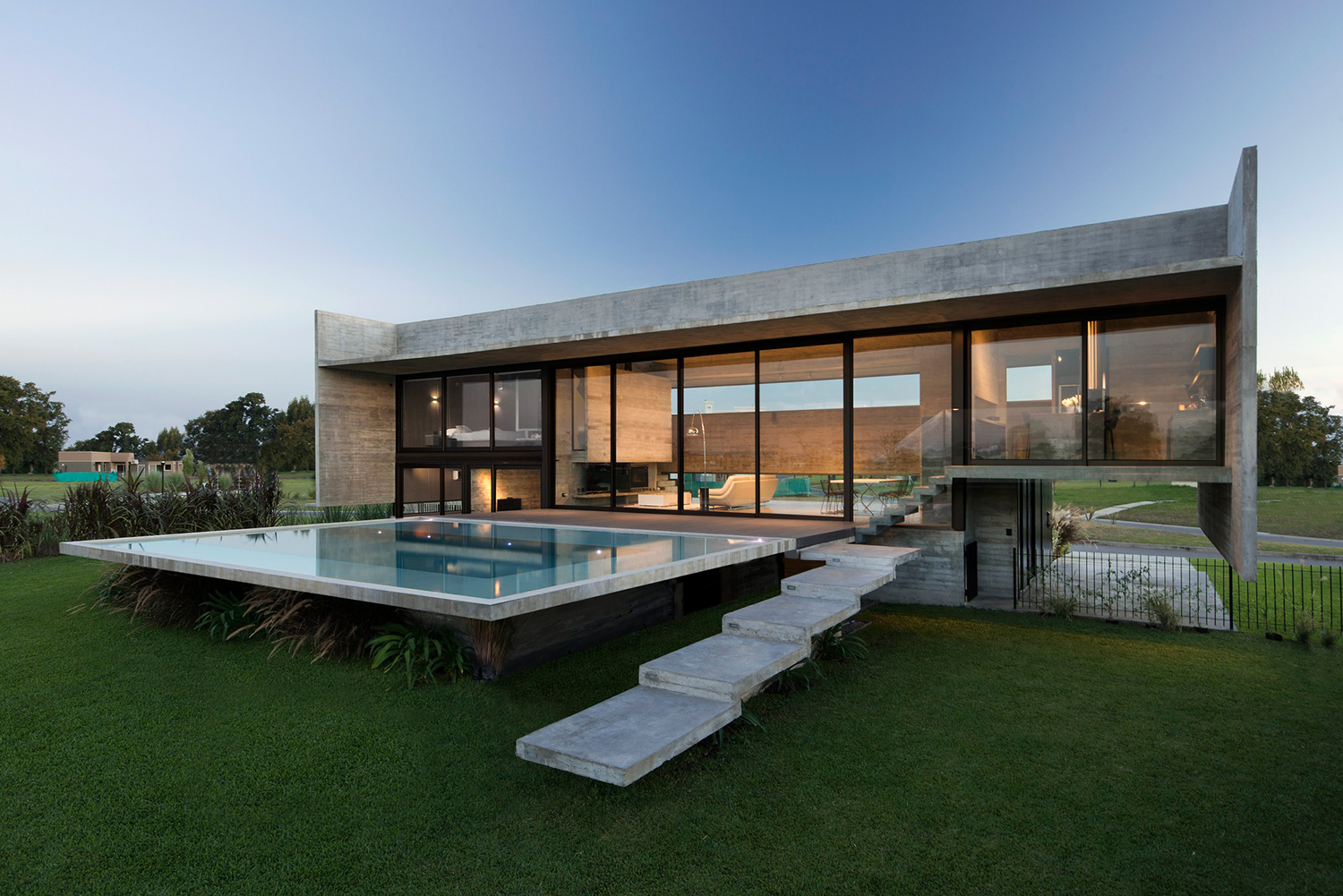 The swimming pool was set as the client requested: incorporated into the terrace of the house. It was configured as a rectangular plate with 3 cantilevered sides hiding its depth to expose a floating mirror, both in the exterior view of the house and in from the inside. Standing from the top of the terrace, the water mirror reflects creating a living sky portrait. 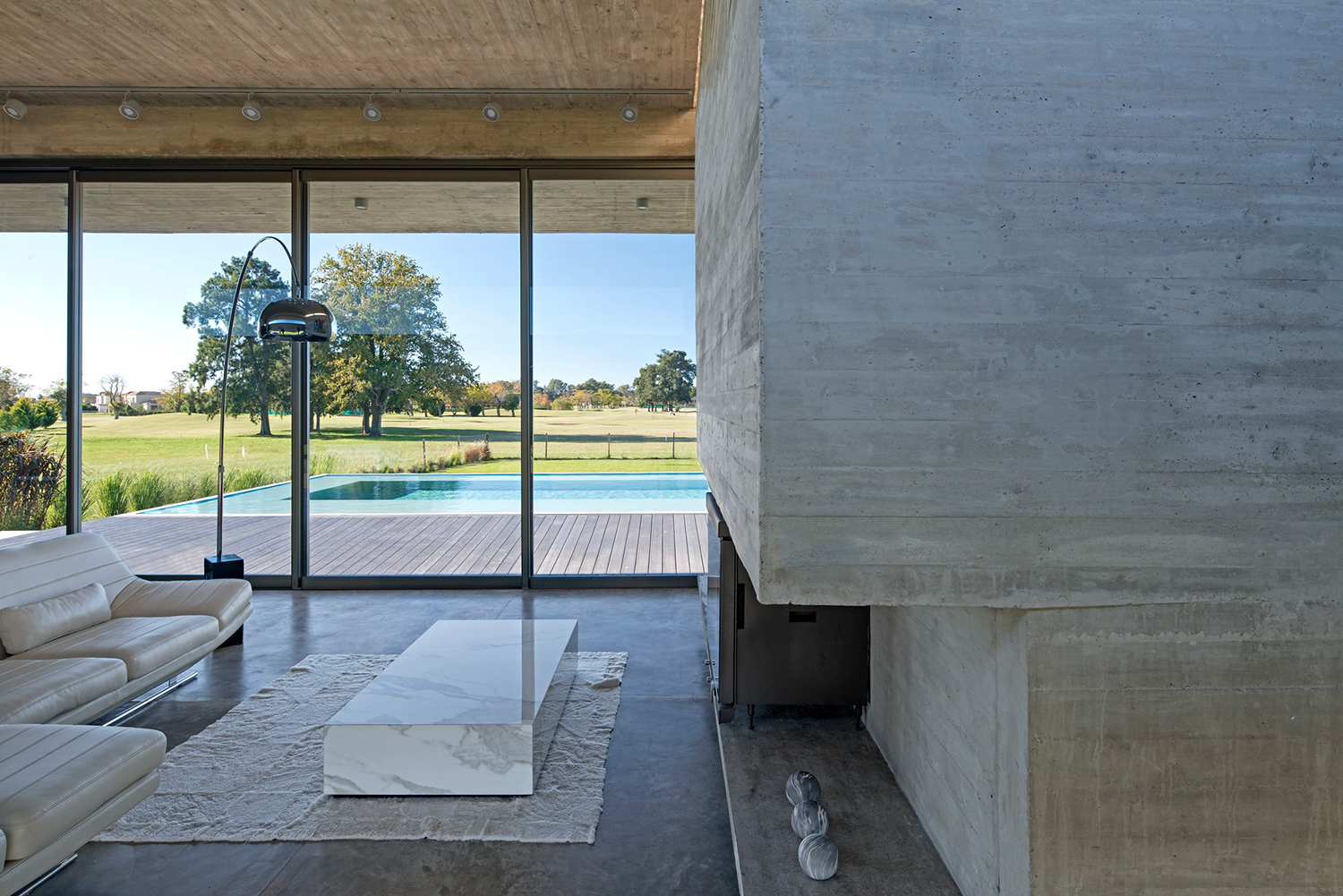 “We managed to come up with a compact volume with a sober shell inside of which the different heights, natural light effects, and envelopes of each room would produce very diverse spatial conditions,” explains the studio. “We aimed at designing a cozy house through means of simple lines and artifice free spaces that would establish a close dialog with their natural surroundings.” 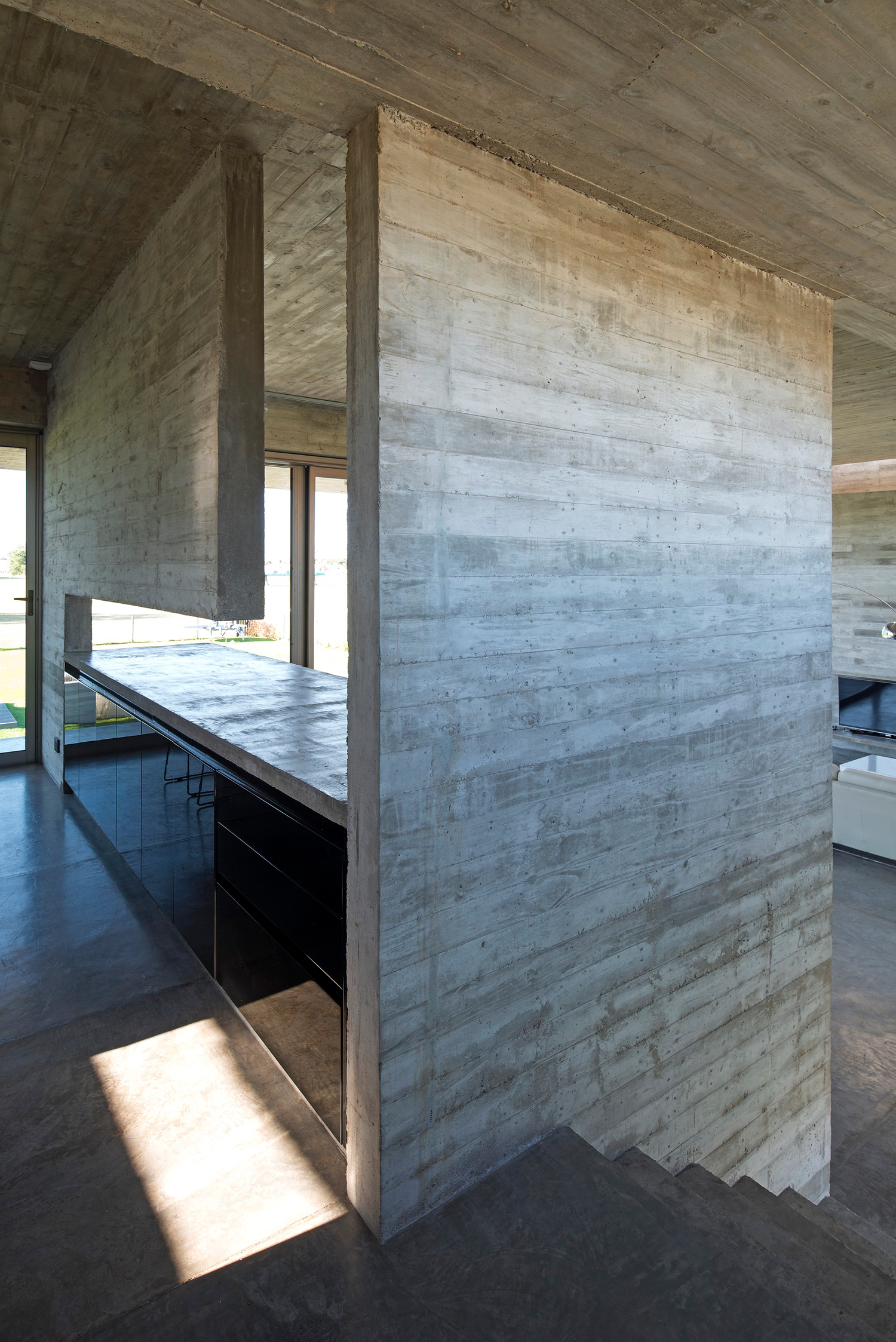 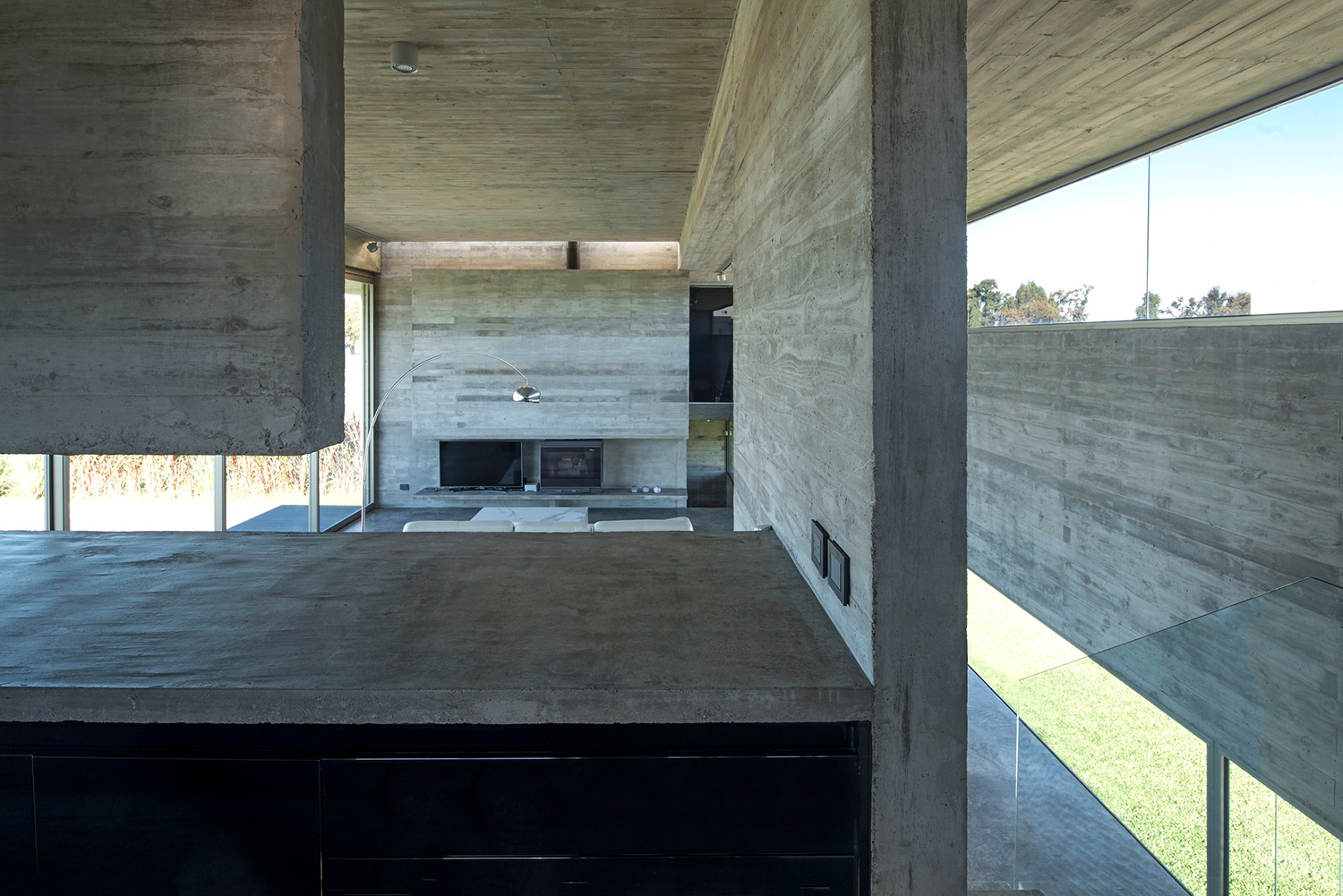 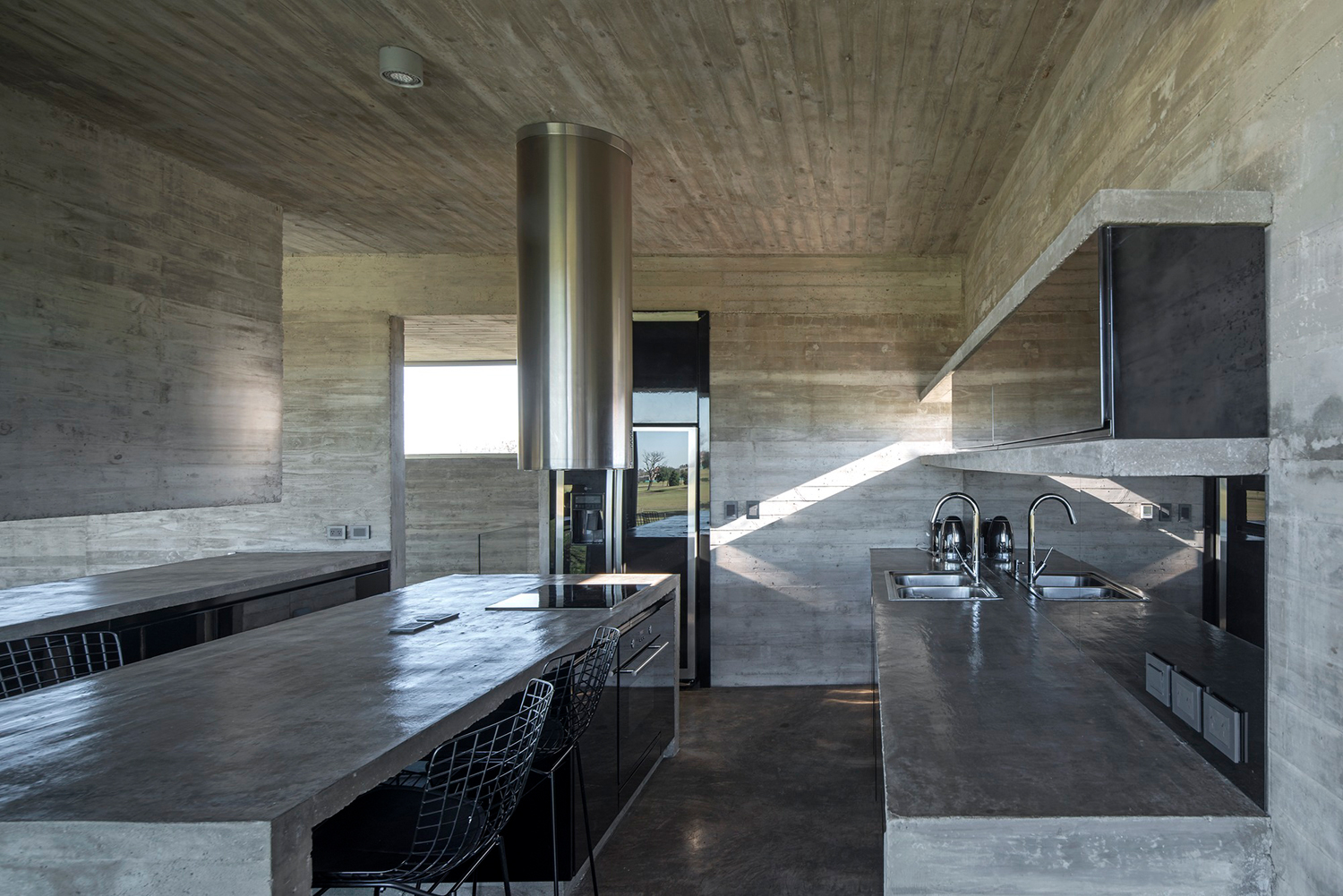 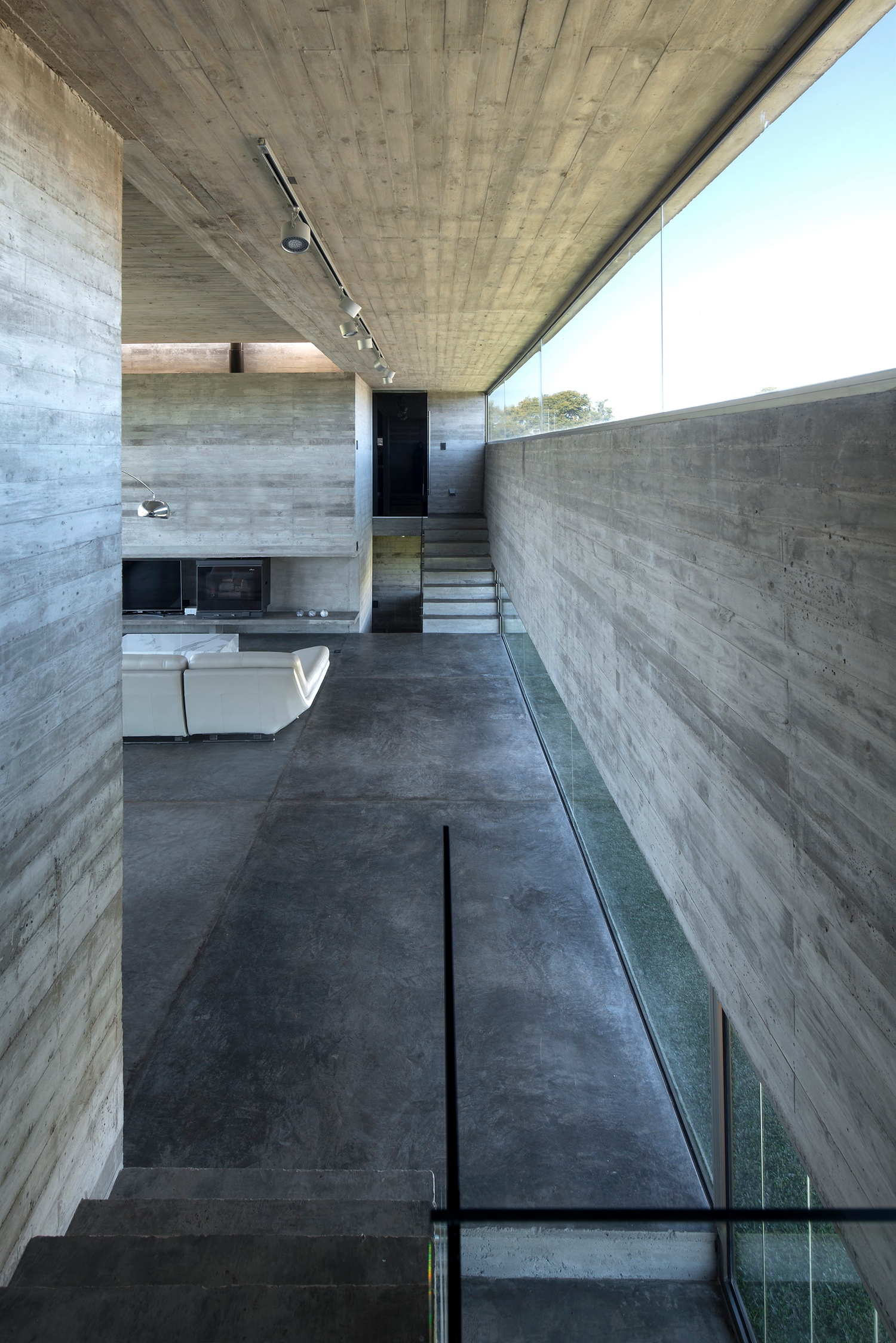 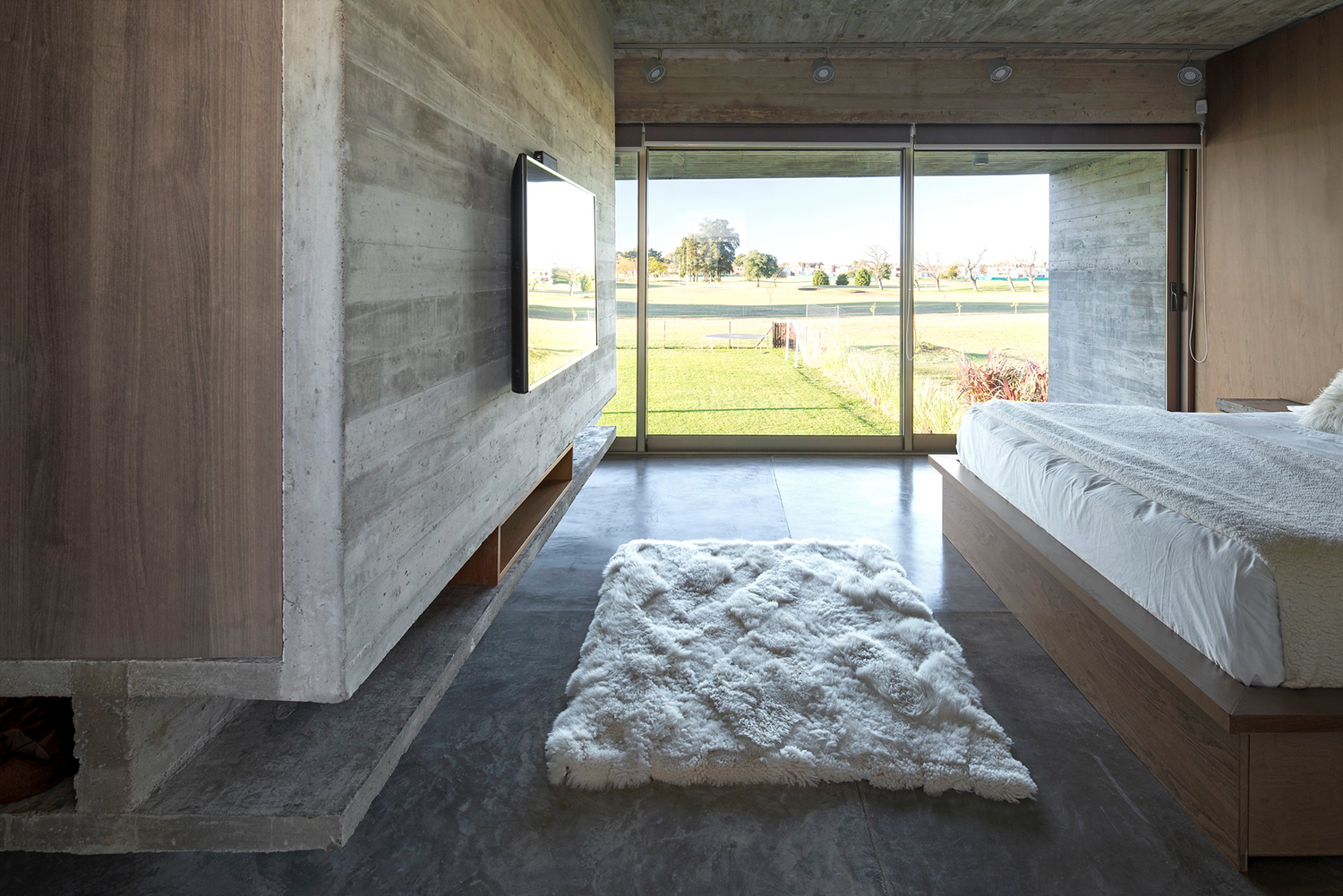