Designed by Atelier Vens Vanbelle for a client in the film industry, Alex Guesthouse was built to provide an unforgettable stay in a cabin-like space.

“The owner works in the film industry and came up with a special request to design something that would make his (international) guests remember their stay for the rest of their lives,” explains the studio. “In addition, Alex also wanted space to give previews of films and other cultural exploits. An extension of his home and job in one story.” 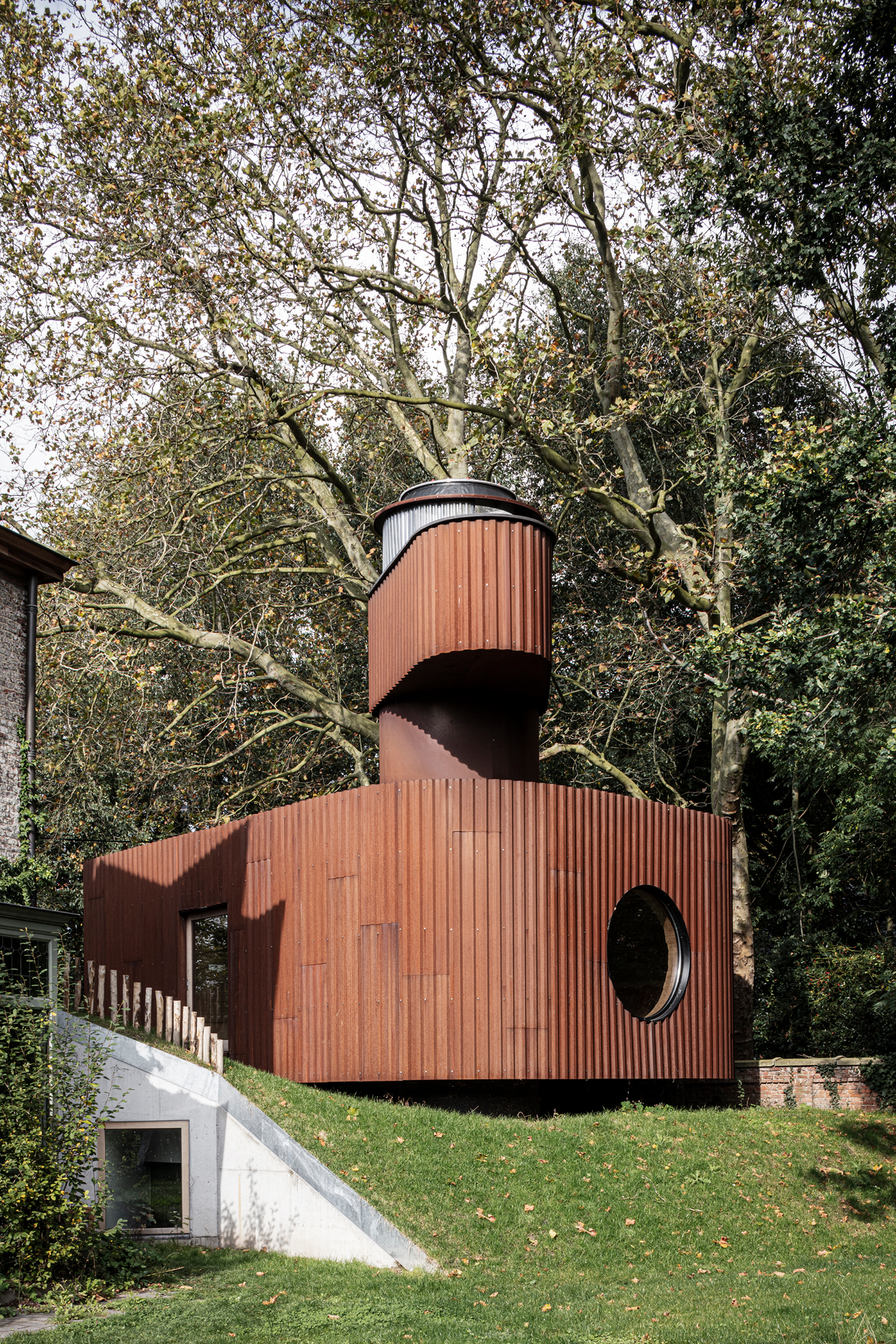 The location is very idyllic, with the Schelde (river) flowing behind the romantic garden on the one hand and a castle view on the other. The French-style house had a garden wall behind which an old dilapidated garage and shed stood in a wild garden. A lost and forgotten corner, but still this place had everything to be the ideal location for the guesthouse: cool setting, privacy, space, and view. 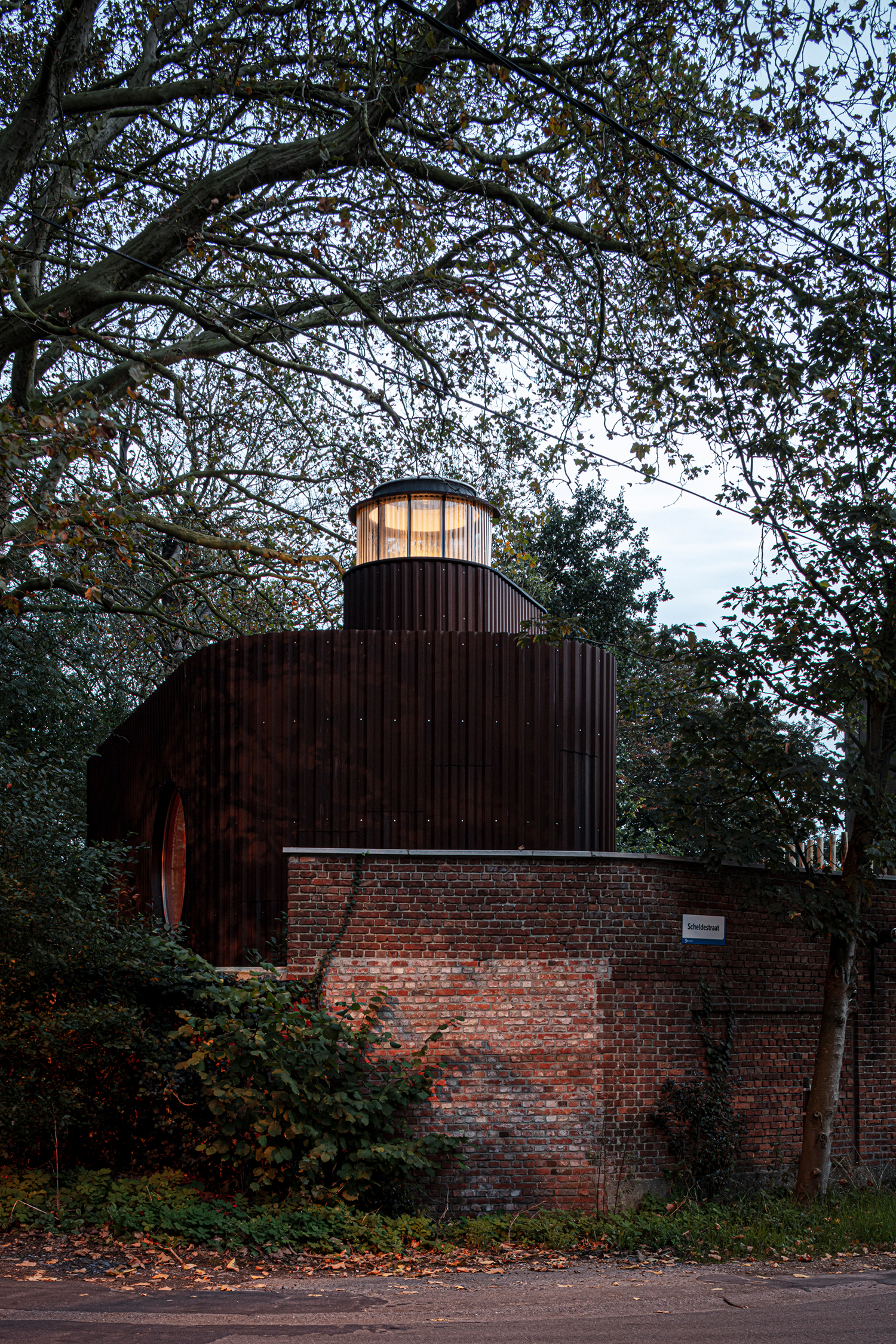 This project remains close to the reality of the owner and as a guest, you literally descend into an alienating underground world before the ultimate log cabin is shown. Guests enter the new garden shed and bicycle shed through the living room of the client, after which they descend a staircase and end up in a long underground corridor. The disorientation is complete. A first surprise awaits them when they arrive in a small cinema hall with red curtains. David Lynch is not far away. Opposite there is a small, nice bar with an equally strange character. 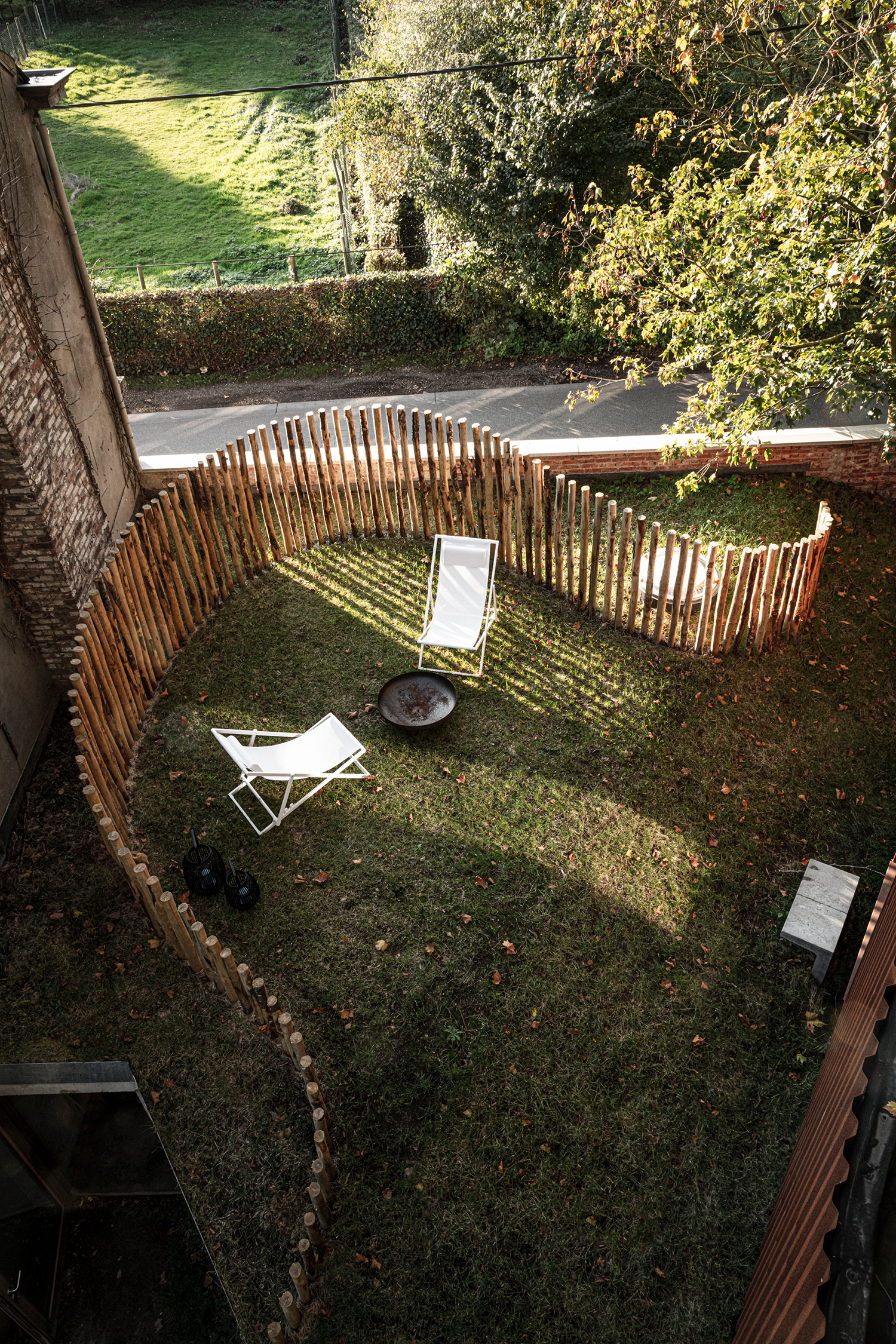 But there is also light at the end of the tunnel in the form of a spiral staircase in a lightbox. Judging by the leaves on the steps, it must be partly outdoors. The stairs seem endless, but a new atmosphere soon emerges the guesthouse. Space is designed like a wooden cave and consists entirely of laminated wood. This serves as a floor, wall, and ceiling as well as for the entire interior: kitchen countertop, bookcase, bench, steps, and even the base for the bed. The guesthouse has two round windows, one of which overlooks the garden and the other the castle domain. 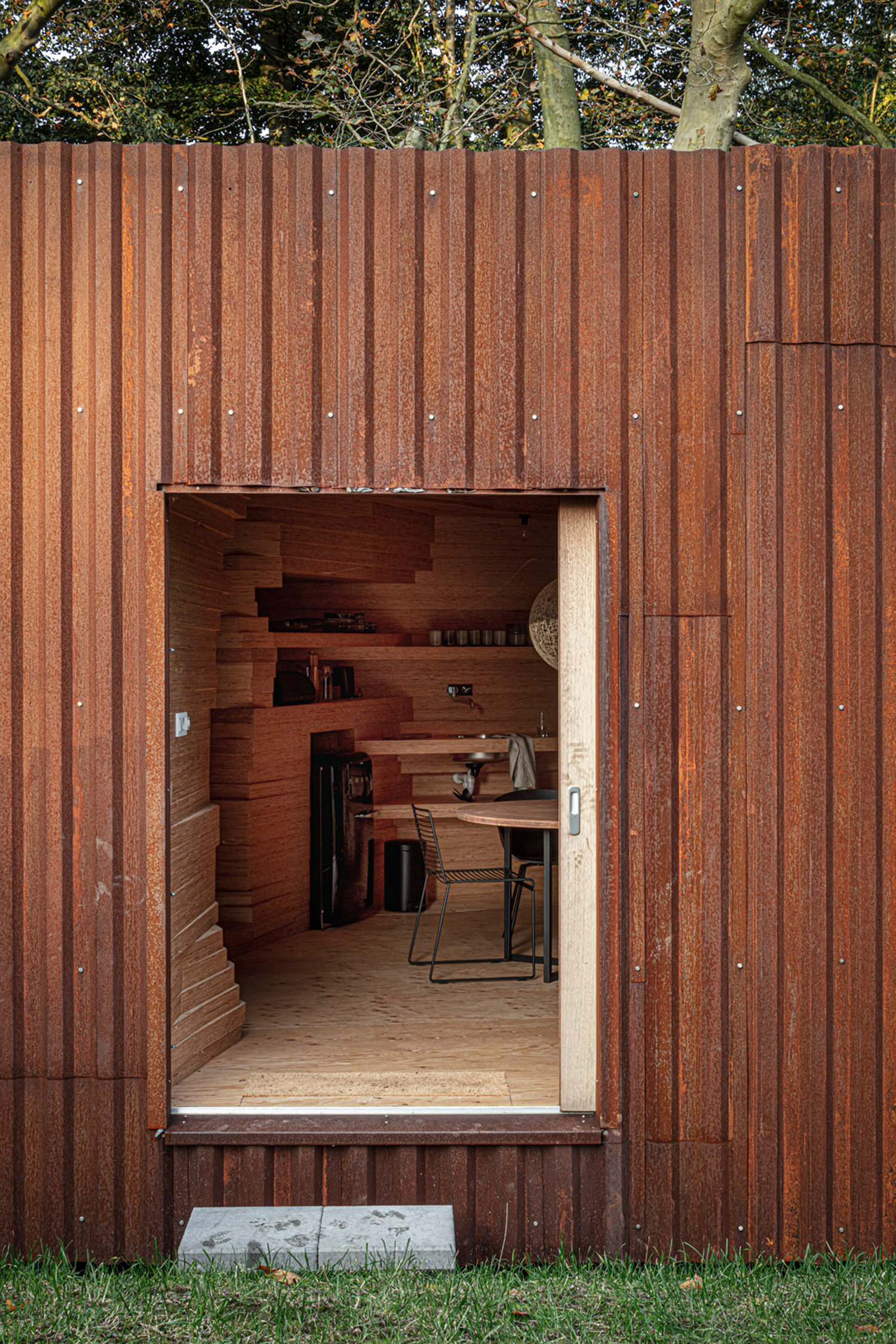 The walk ends, again via the spiral staircase, at a unique viewpoint over the entire area. In this tip of what looks like a lighthouse, you also enjoy an outdoor shower while you can touch the crown of the surrounding plane trees. To achieve this, the garden landscape was tackled: the ground was raised and serves as a green roof for the underground story, while the base of the guesthouse seems to float slightly above the garden. On top of the slope, guests can enjoy the evening sun on a private terrace. 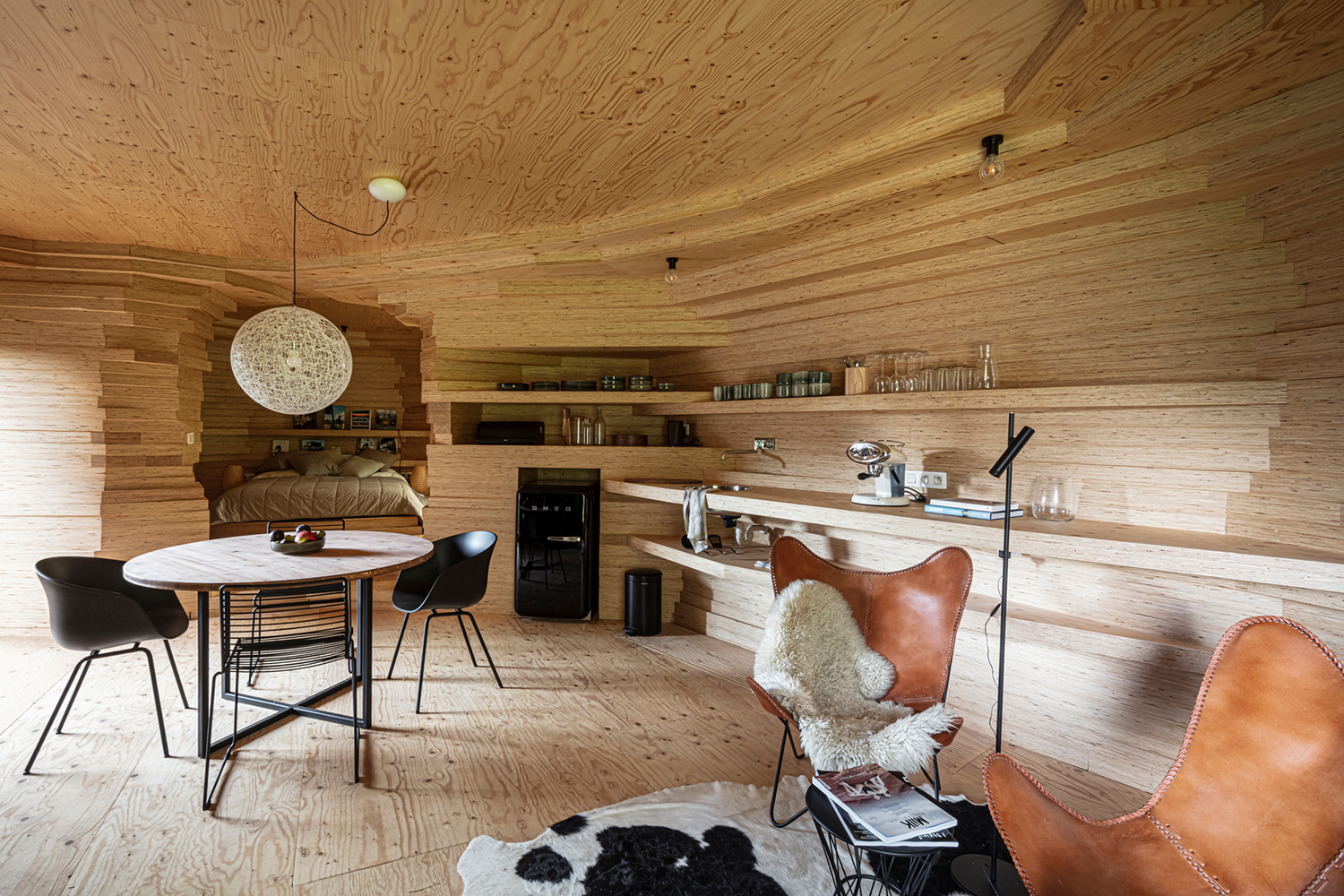 The guesthouse was built up layer by layer in the studio in 4 cm thick laminated wood. It was then transported in four pieces and rebuilt on site. The corten steel facade cladding ensures that the whole will blend beautifully in nature. The building is abstract, it is difficult to estimate what it is exactly. It could just as well be a submarine or a container. It is open to interpretation. 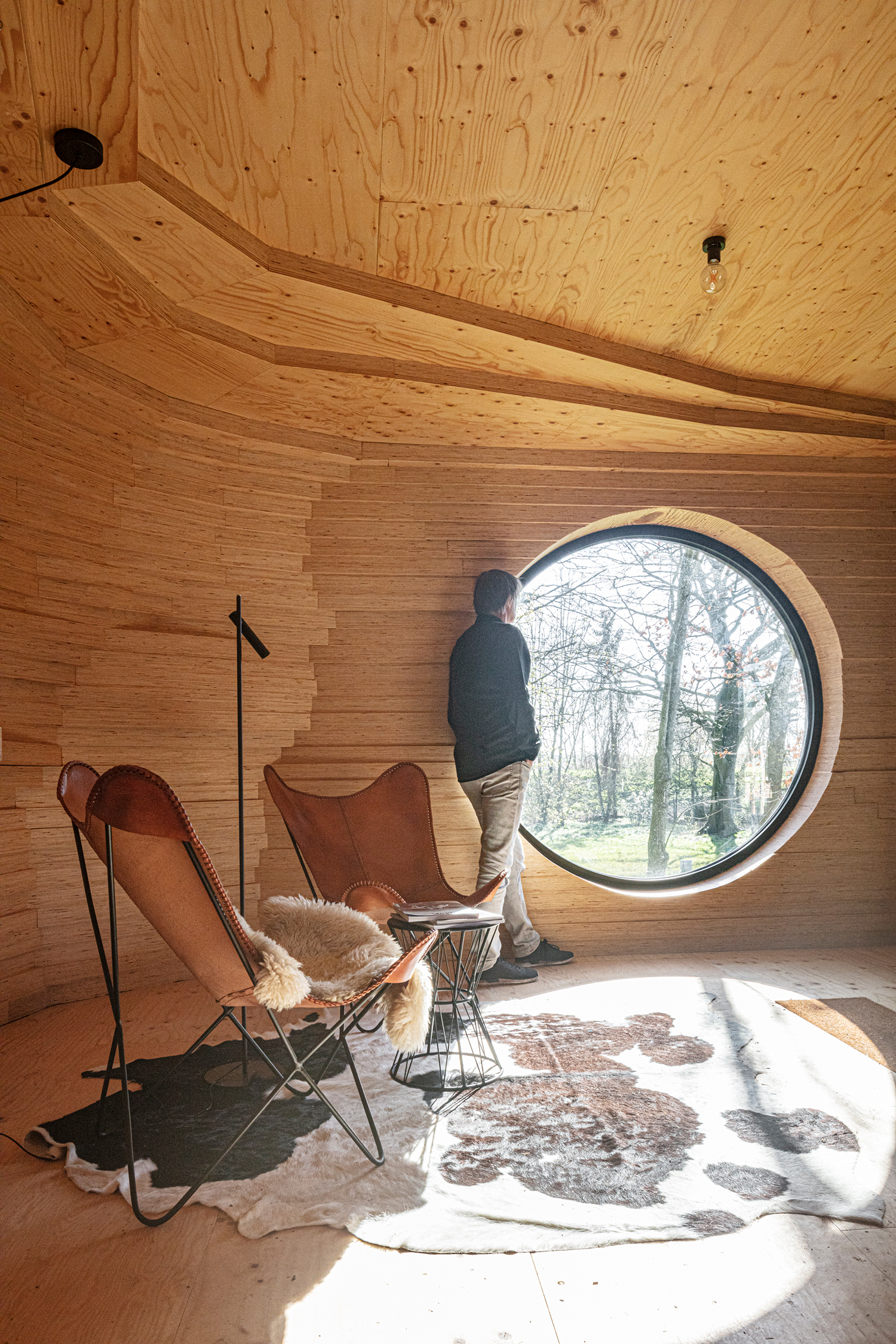 This project was designed as a kind of cinematic experience, in which you are catapulted from one atmosphere into another and which responds strongly to your feeling. One elongated surprise with a guesthouse that stays as far away from a typical hotel room as possible. Here you are briefly away from the world. 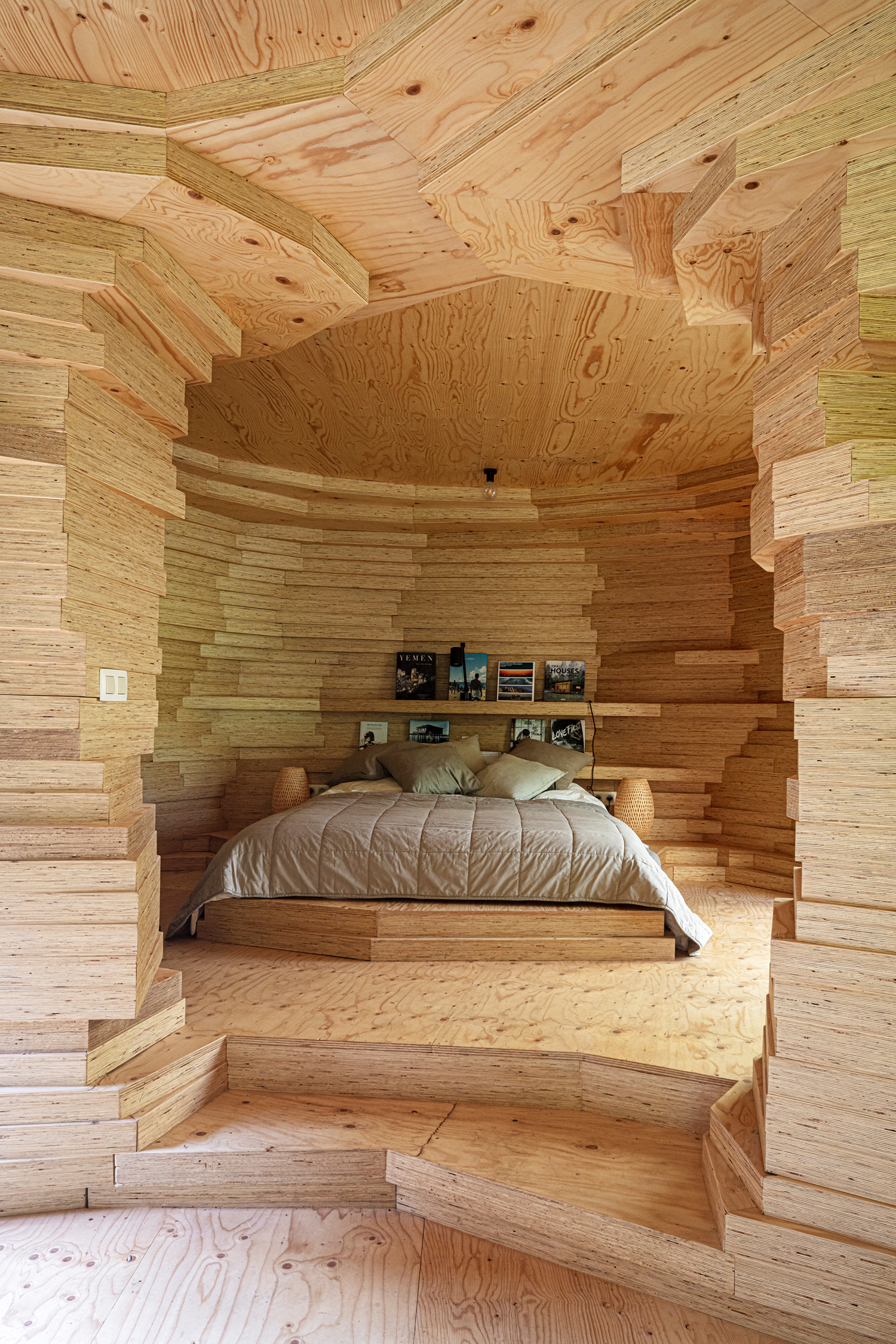 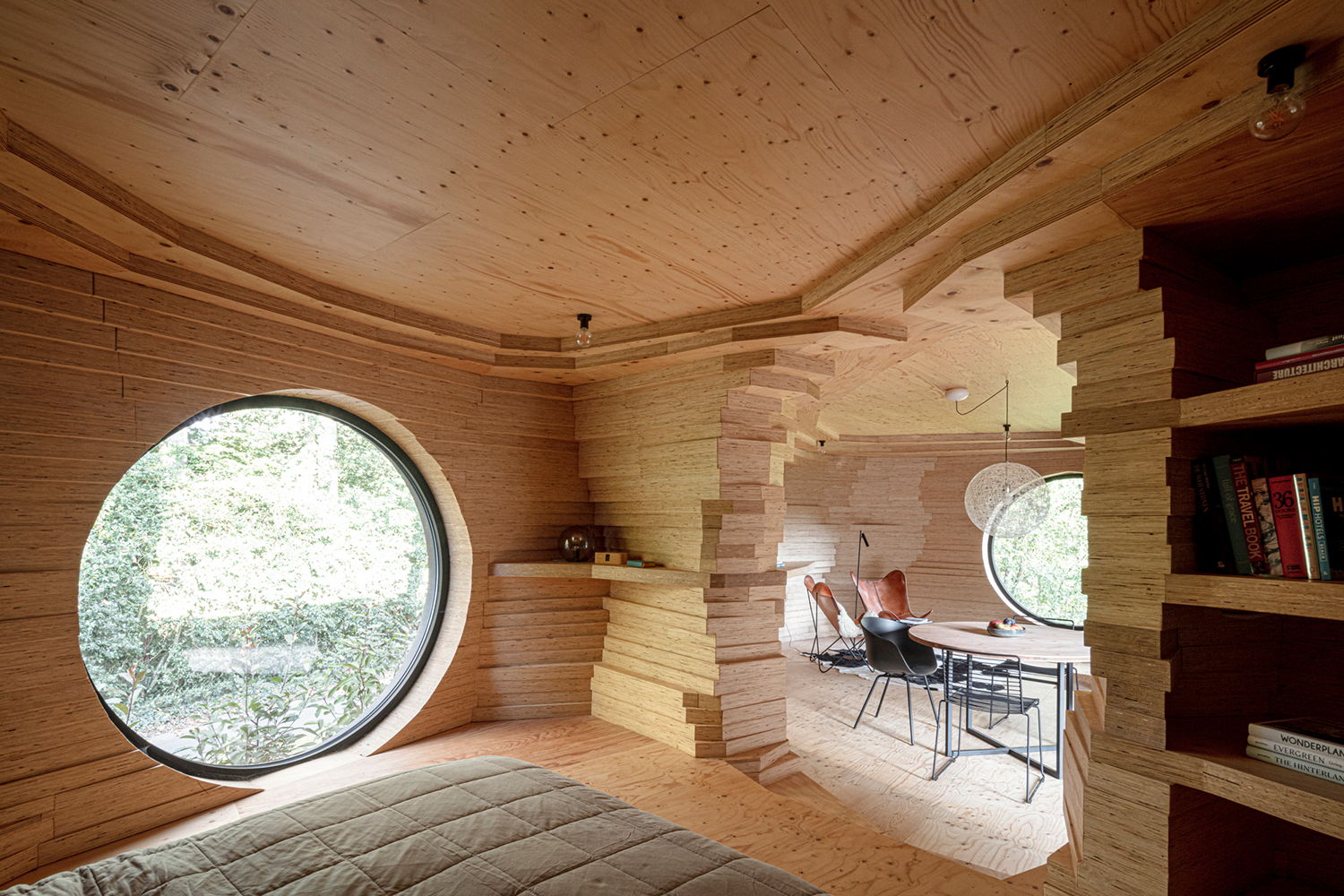 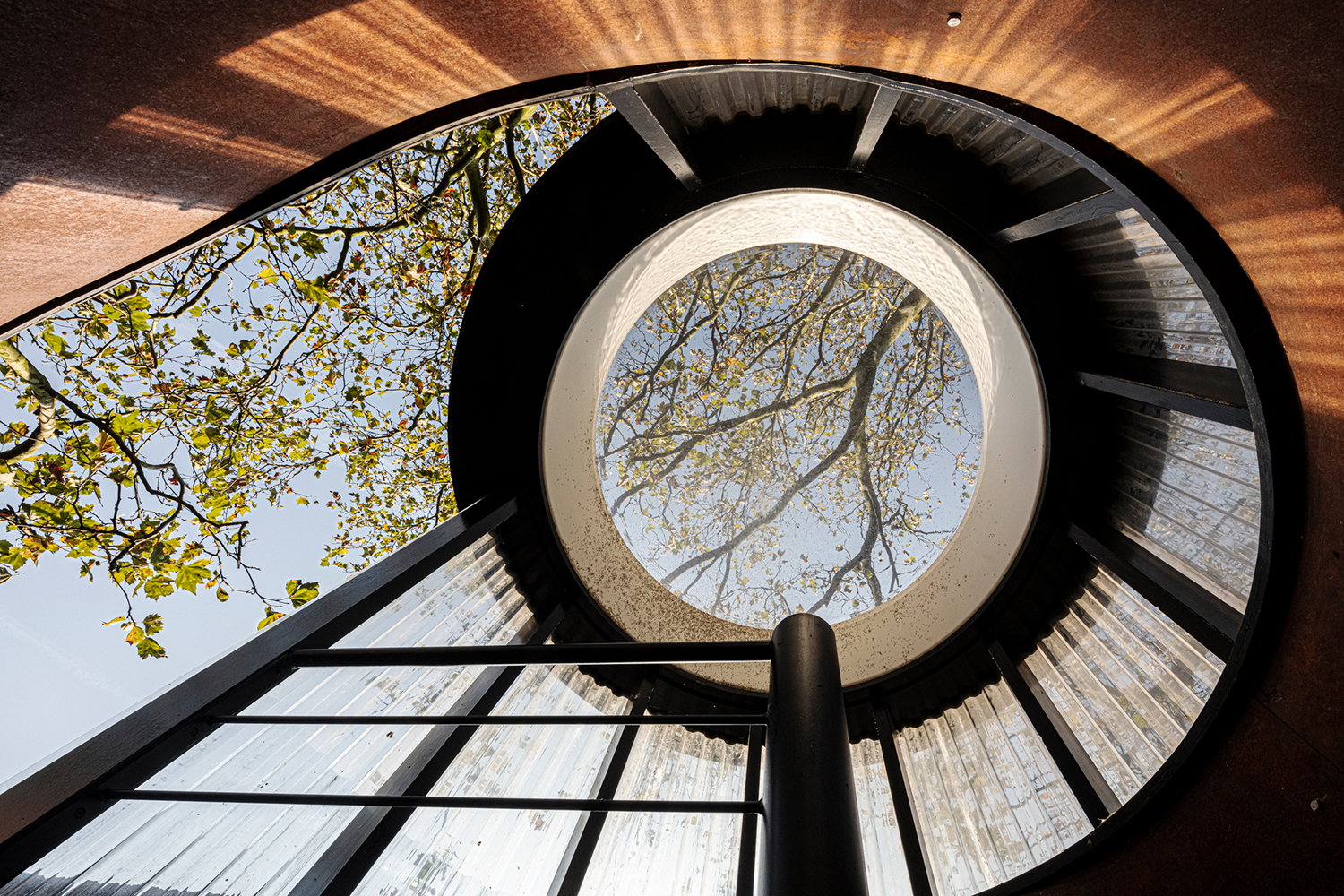 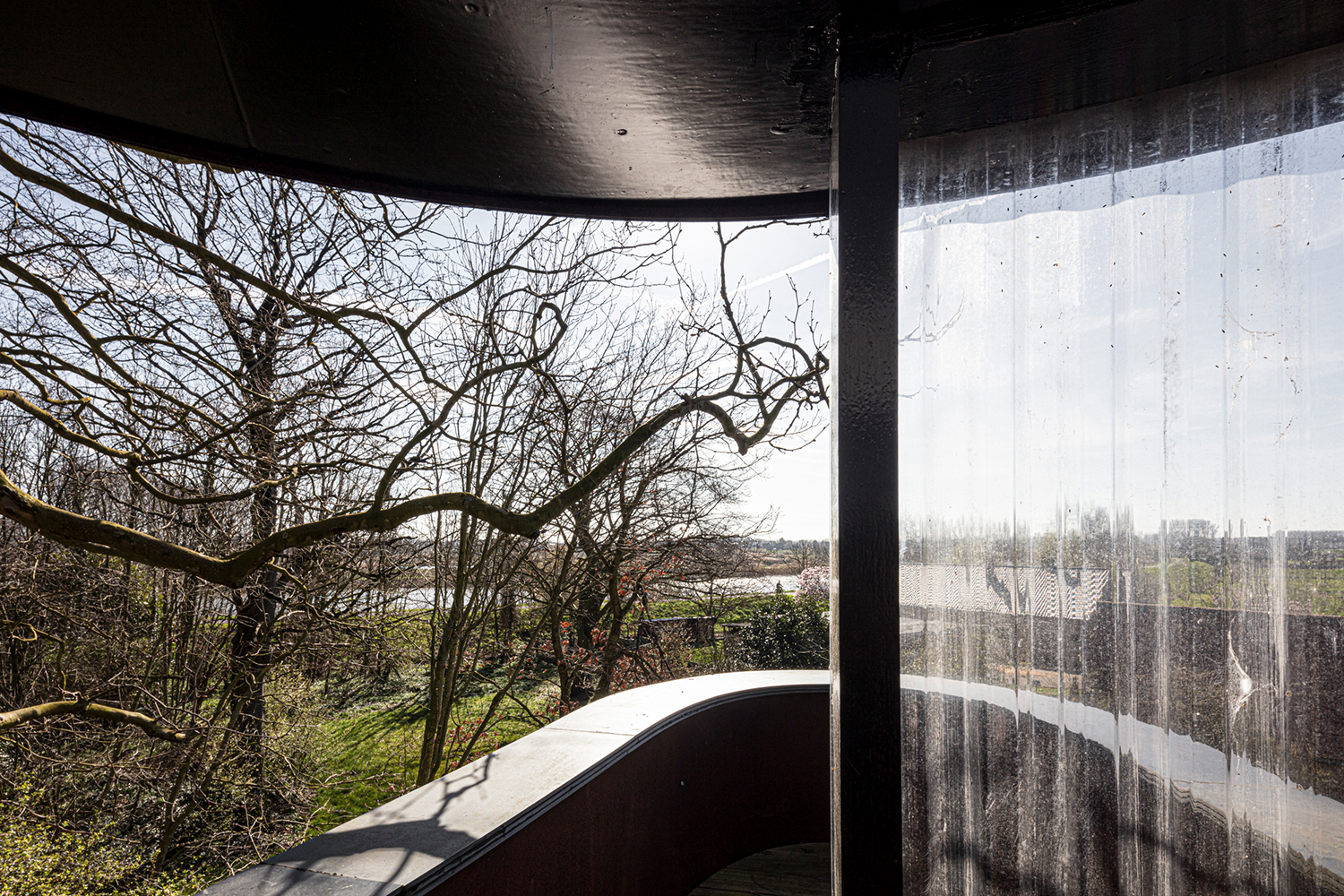 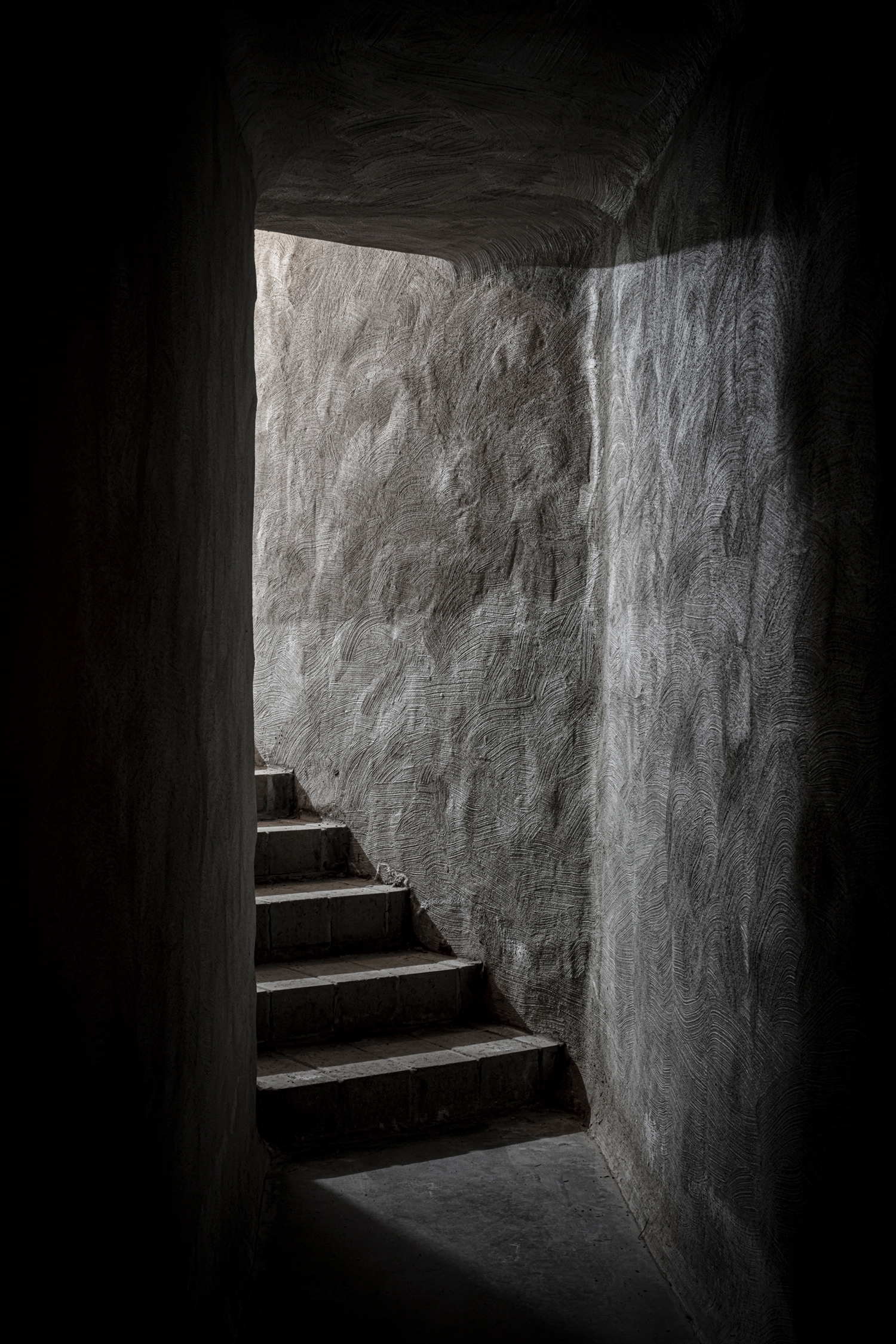 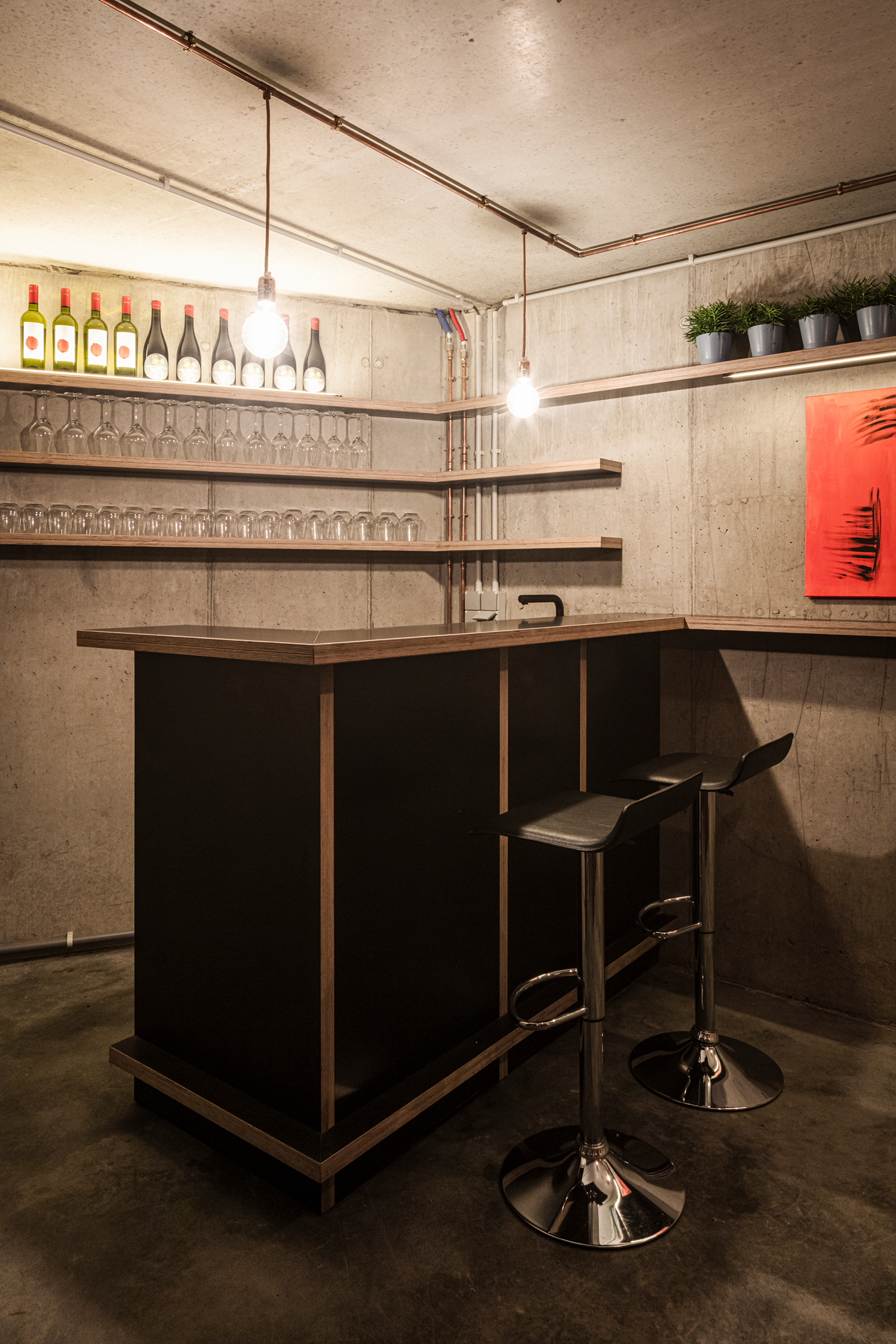 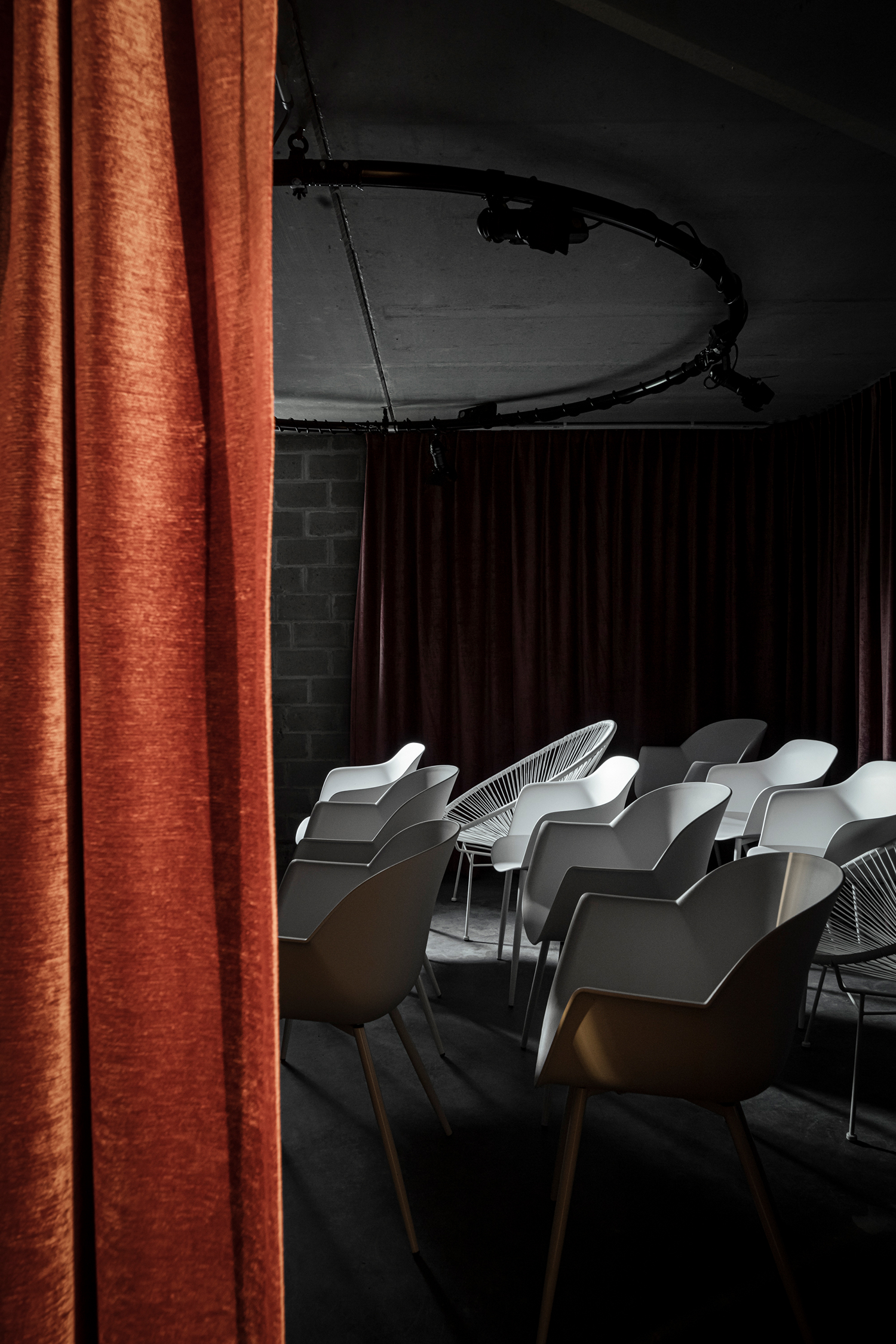