Architecture studio Chybik + Kristof has unveiled its design for a pavilion conceived for a greenhouse in the Czech Republic where Gregor Mendel discovered genesis. The greenhouse is located in Brno in the grounds of St Thomas’ Abbey, an Augustinian monastery built in the 14th century. The original greenhouse structure was swept away in a storm a few years later, leaving behind only its foundations.

Gregor Mendel, a scientist and abbot of St Thomas’ Abbey, conducted a series of experiments from 1856 to 1863 growing pea plants in his outdoor laboratory, which lead to his groundbreaking discovery of inherited characteristics. Built with the support of the abbot, Cyrill Napp, who sought to establish his monastery as a leading center for scientific research, the greenhouse was erected as an extension of the monk’s outdoor laboratory. The experiments conducted there, although acknowledged only after Mendel’s passing in 1884, are now widely recognized as the foundation stone of modern genetics. Drawing on the history, scientific legacy and archival materials of the site, and following the original ground plan, Chybik + Kristof has created a design reminiscent of the original building. Integrated in the structure and left visible, the preserved foundations are at the basis of the architects’ reinterpretation – echoing the orientation, shape and distinct roof of the greenhouse.

While the trapezoidal volume is identical to the original edifice, the reimagined supporting steel structure seeks inspiration from Mendel’s three laws of inheritance – and the drawings of his resulting heredity system. Likewise, the pitched roof, consisting of a vast outer glass surface, reflects his law of segregation and the distribution of inherited traits, and is complemented by a set of modular shades. 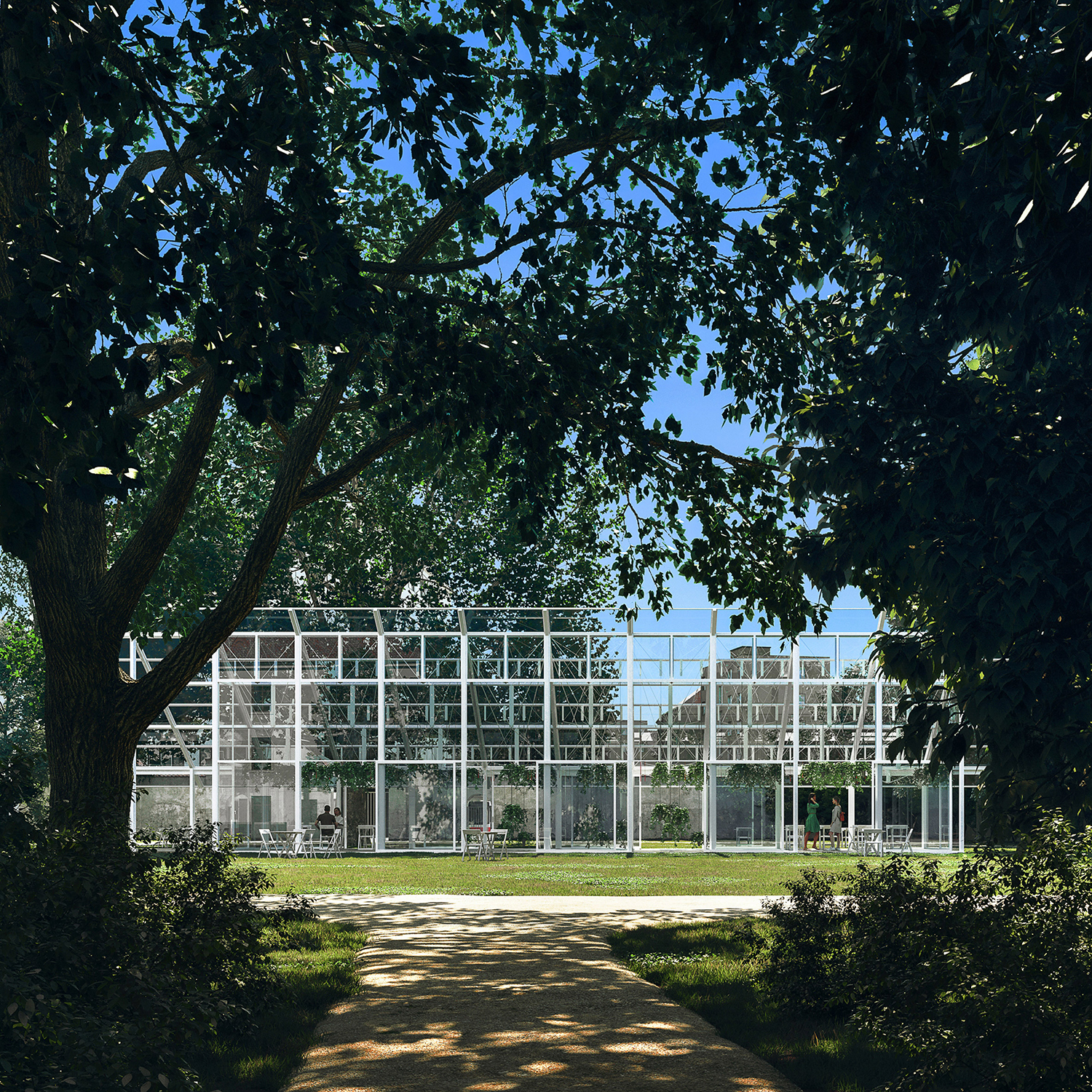 Open onto and deeply connected with the surrounding gardens, the edifice looks onto the nearby statue of the scientist adjacent to the centennial monastery. The flexible design, conceived to adapt to a variety of purposes, is entirely exposed to the exterior with fully open side walls, preventing any visual barriers. A concealed system of heat pumps, shading and heating, located underground, reveal the building’s sustainable scheme, reliant on its adjustable shades and embedded blinds to ensure natural cooling and ventilation in the summer and heating in the winter – thereby mirroring and revisiting the regulative properties of a greenhouse. 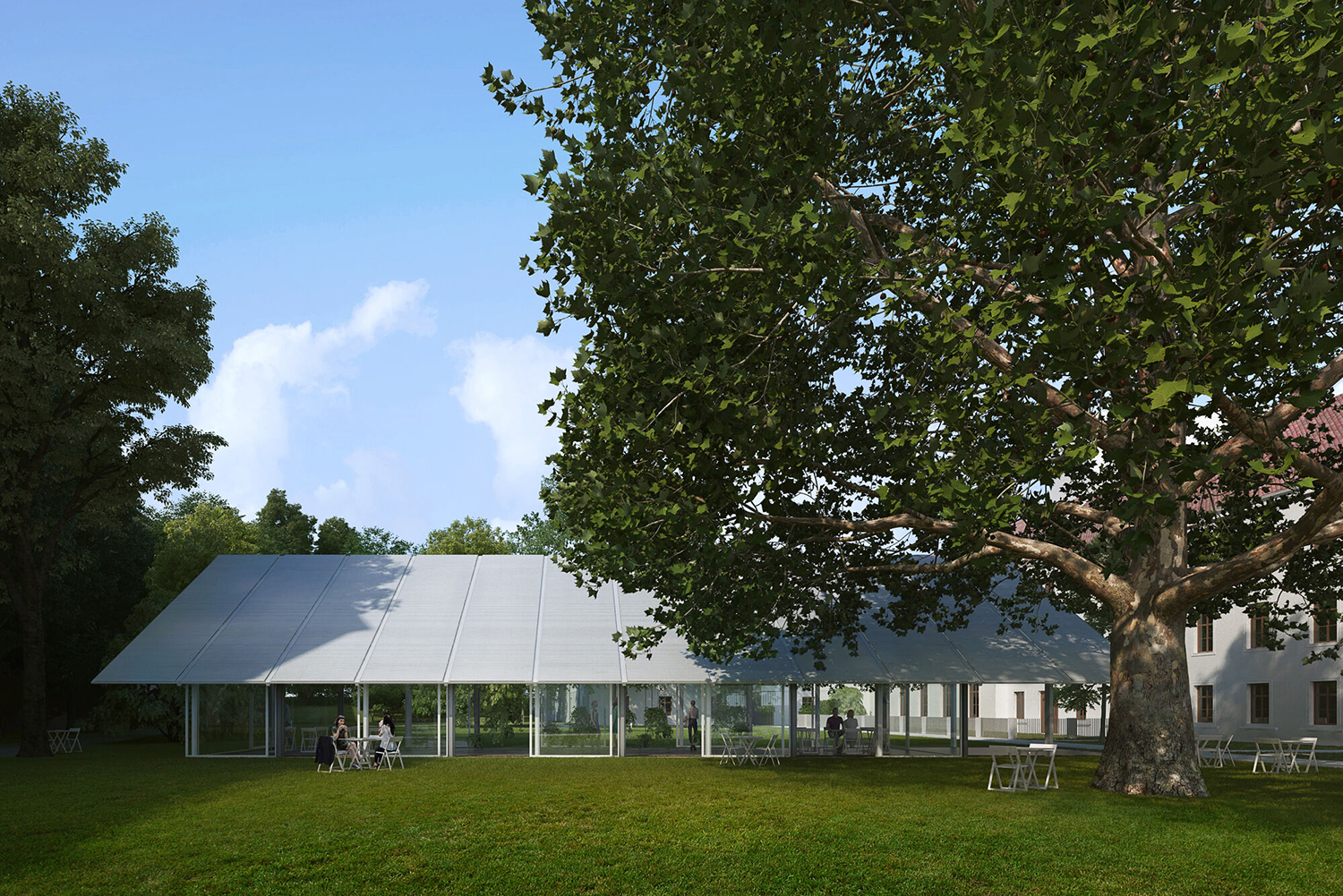 With the aim of attracting local and international visitors as well as a professional public essential to preserving the monastery’s legacy, the revived structure acts as a versatile space celebrating Mendel’s work and contributions to modern genetics. The vast, adaptable volume allows for a diversity of events from conferences and lectures to temporary exhibitions, while the integrated blinds enable the space to be darkened for projections and concerts. “The concept of the redesigned greenhouse is deeply rooted in the work of Gregor Mendel,” explains architect and founder Ondřej Chybík. “The nodes and branches constituting the steel supportive framing are in direct dialogue with his laws of inheritance, in particular that of hereditary segregation. Building on this notion as well as Mendel’s original drawings, the resulting, highly complex structure pays homage to his legacy. Laid bare by the transparency of the glass roof, the edifice both embodies and exposes his undeniable contribution to modern science.”

The revived Mendel Greenhouse is due to be completed in 2022, in commemoration of the 200th anniversary of Gregor Mendel’s birth.