Architecture studio Mas-aqui has recently renovated Akari House, a 20th-century apartment in the mountains above Barcelona, adding a large skylight built into the roof terrace. “Akari” is a Japanese concept that refers to the emotional power of light, to its ability to create atmospheres and spaces of well-being for people, thus stimulating our feelings and emotions. 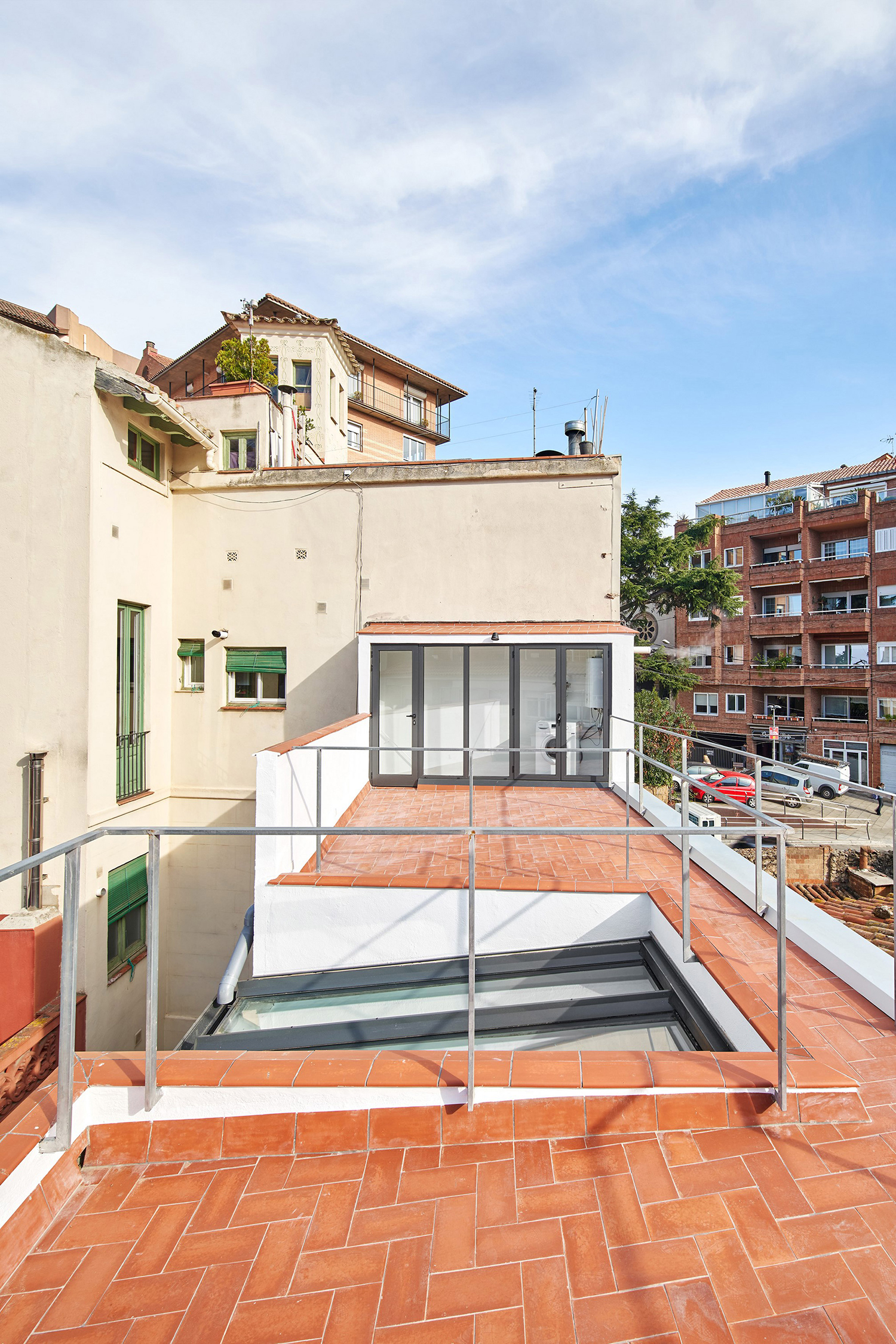 The owner bought the property, which dates from the 1910s, in a state of disrepair, having already commissioned the studio to overhaul it. The building is located next to a busy road, mostly facing north. It had structural and distribution deficiencies. Most of the rooms lacked light, the terrace did not have independent access, and the roof was in poor condition and had been covered by a sheet metal that generated leaks. 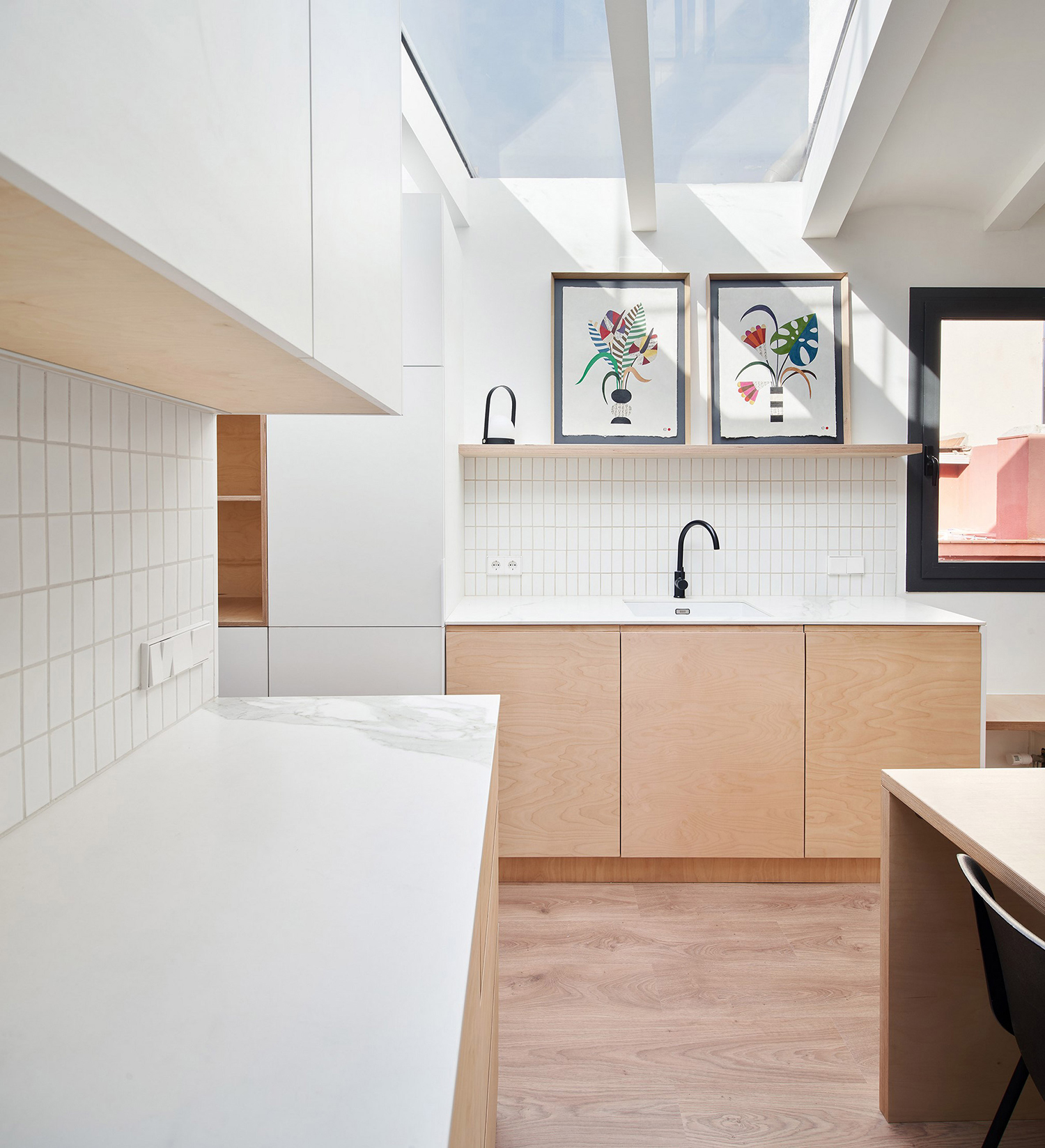 Along with the desire to enhance the quality of light and make it flow throughout the house, the driving force behind the project was the idea of reducing to multiply. The forms and materials were simplified and, from simplicity, character was infused into the spaces to be able to enjoy life on three levels. 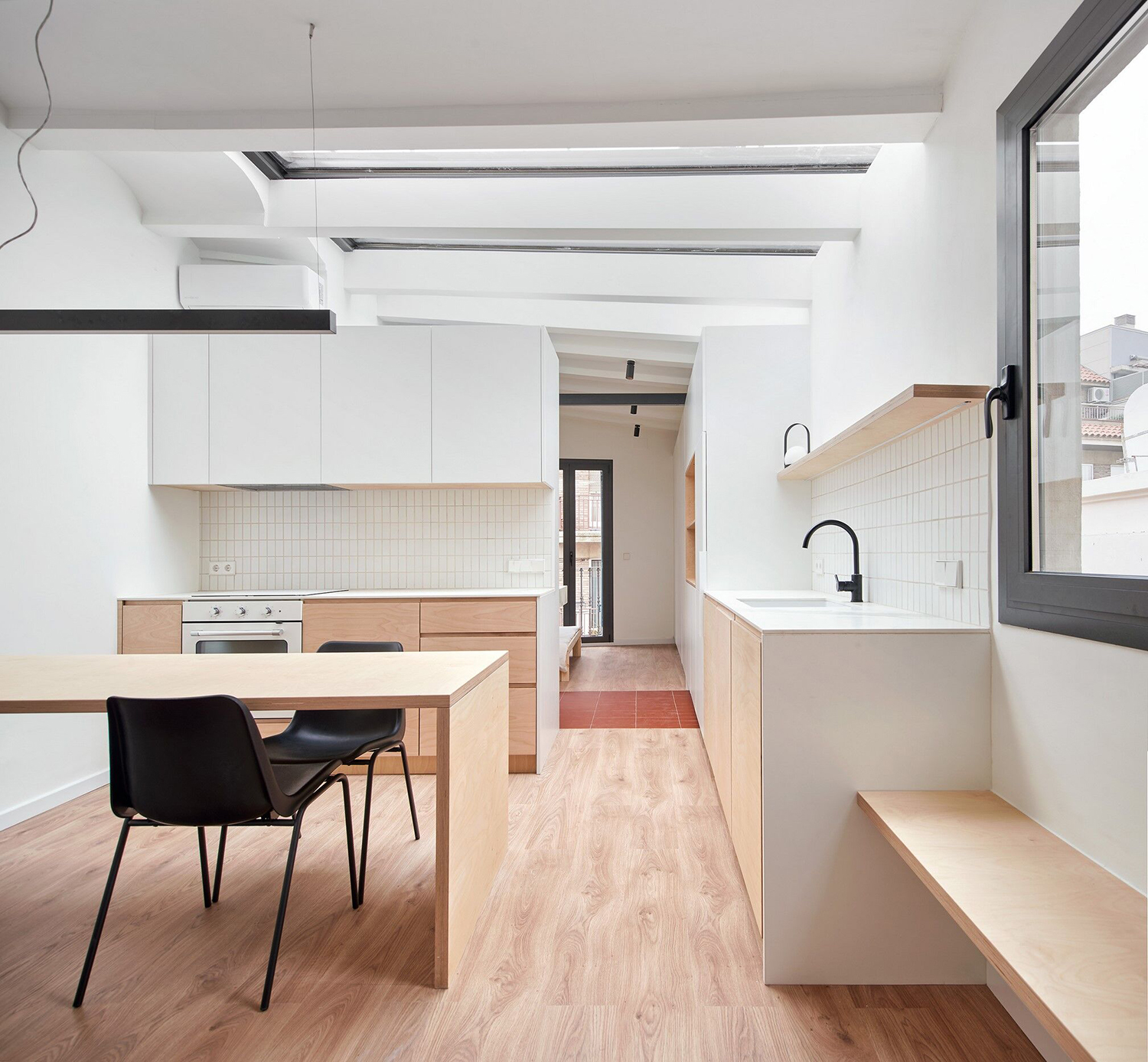 On the first floor, the vestibule, corridor, bedroom and study coexist in a fluid manner in a polyvalent space that reverts the old compartmentalization of the floor plan and stimulates the sensation of amplitude and visual depth. The access to the upper floor was moved and reorganized. It is now an overhanging staircase that spills light. The place of the old staircase is now occupied by a washroom, small but complete. 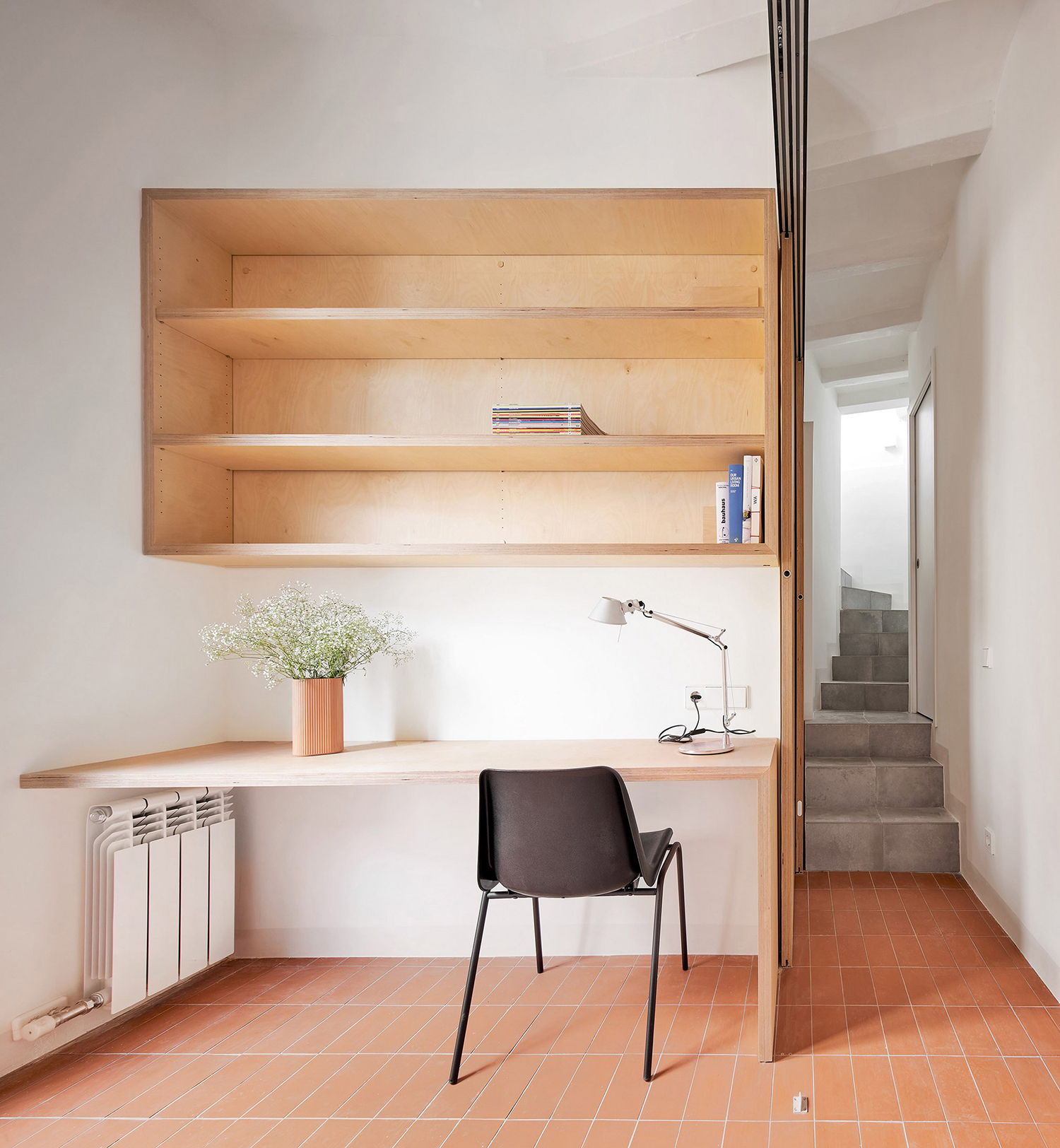 On the second floor, the lack of light in the original construction was reversed with the installation of the large skylight. This new element manages to bring natural lighting to the kitchen, with white furniture to multiply the light, and also to the bathroom and the living room, which also has two exterior windows. On the side of the room, the staircase opens as an element with great decorative force. On this floor is also the master suite bedroom, with a bathroom of marked personality owing to its cube shape together with a washbasin element outside the bathroom and the red materials, and separated from the rest of the spaces by a sliding door. 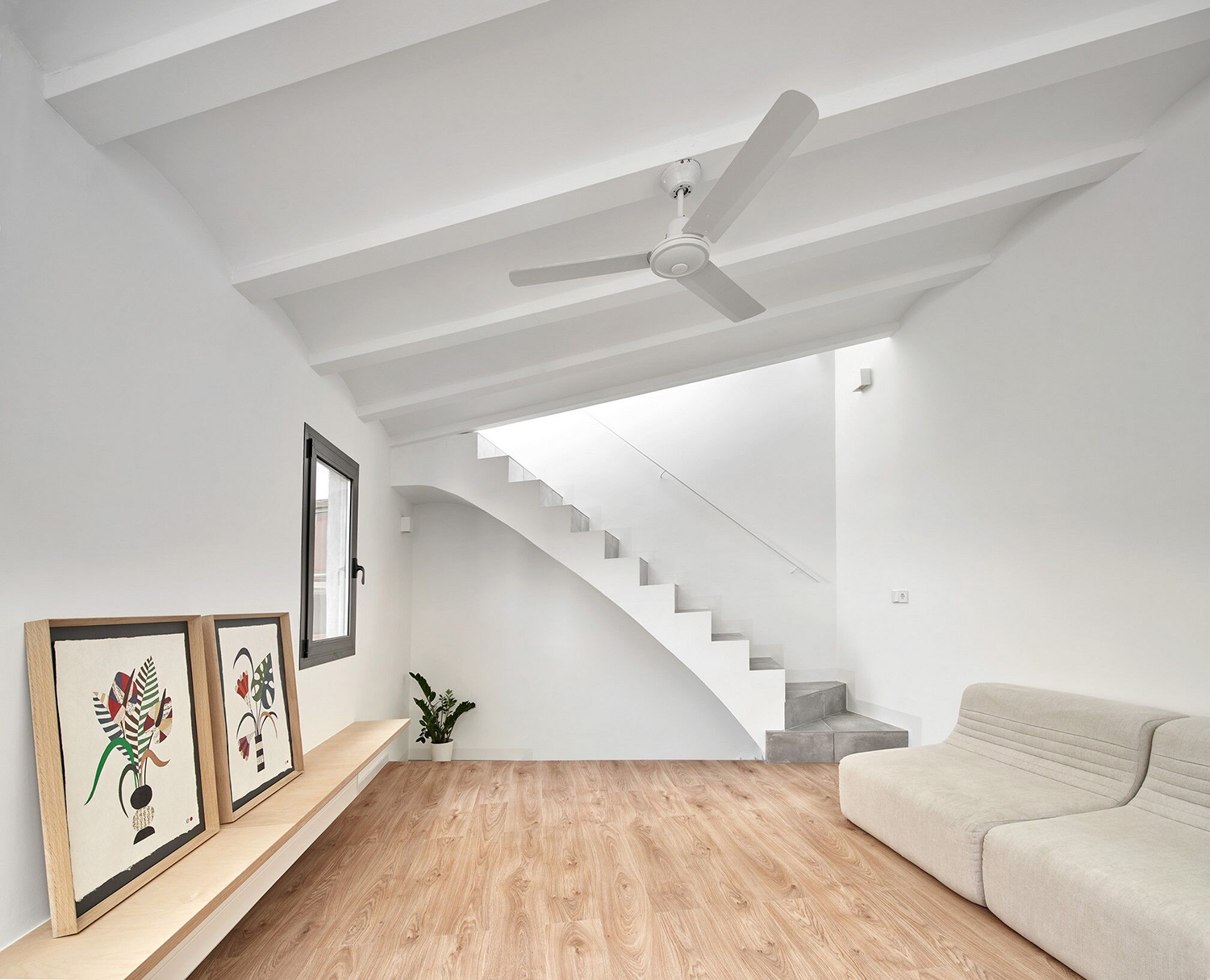 The terrace, with a 360-degree panoramic view, is the great protagonist of the third floor. It is accessed via a glazed enclosure that allows for maximum use of the exterior light. And it projects towards the house a clarity that flows through all the rooms, highlighting its simple shapes, which have been carefully studied with the objective of stimulating comfort and warmth. 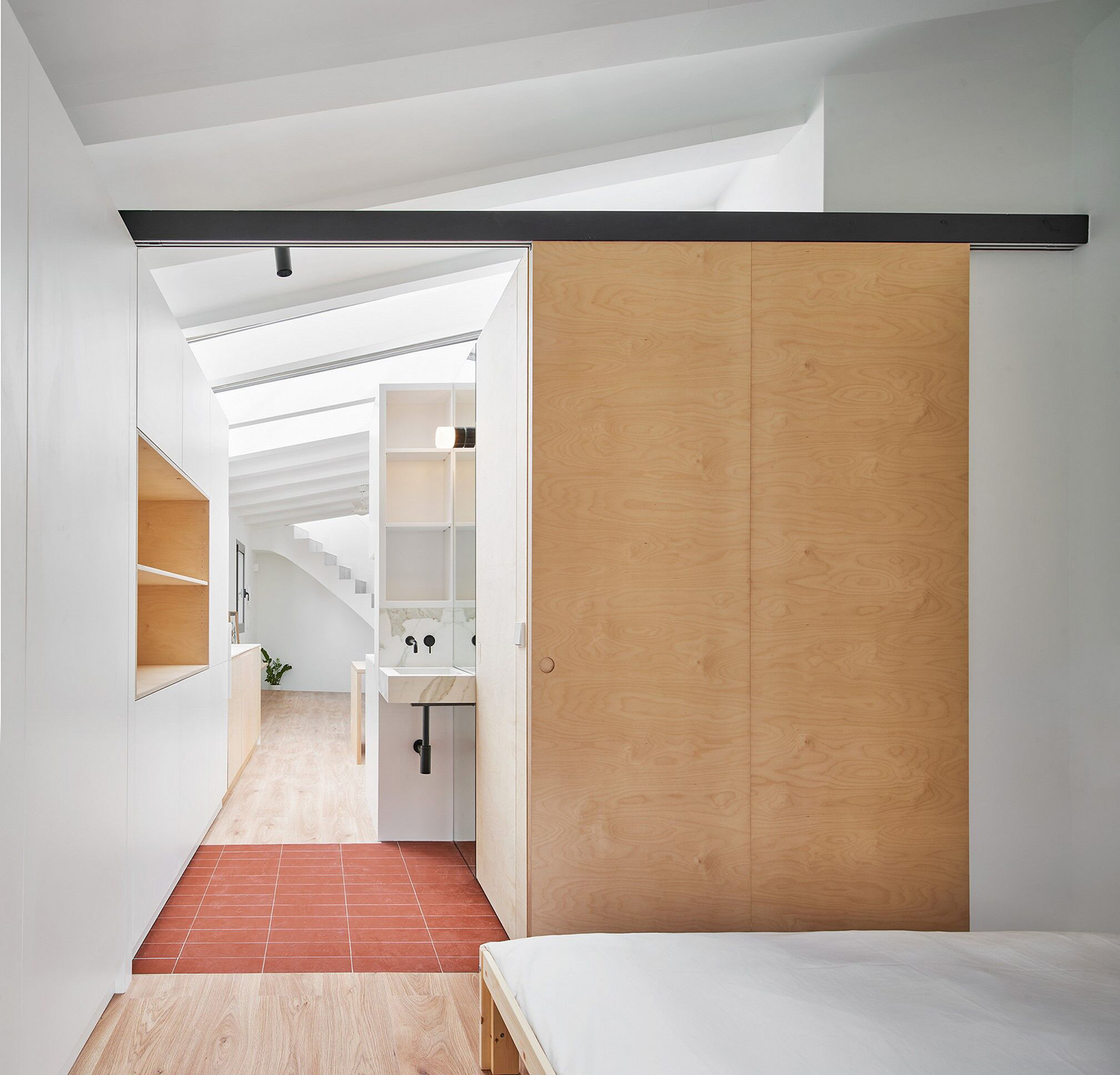