Chinese architecture studio X+Living has recently completed the second Zhongshuge bookstore in Beijing. This time it joins Lafayette department store, where the classical gardens and the reading space collided from three different perspectives in the fashionable commercial area. With reference to the expression techniques of Chinese classical gardens, the designer connects various functional areas with different formats of space layout, and sketched the flowing path for consumers to explore.

The bookshelves are both a canvas and a wall, making the door porch like a painting unfolding gradually. In the doorway, it is faintly visible the depth of the space, which makes people can’t help but walking into the bookshop for exploration. 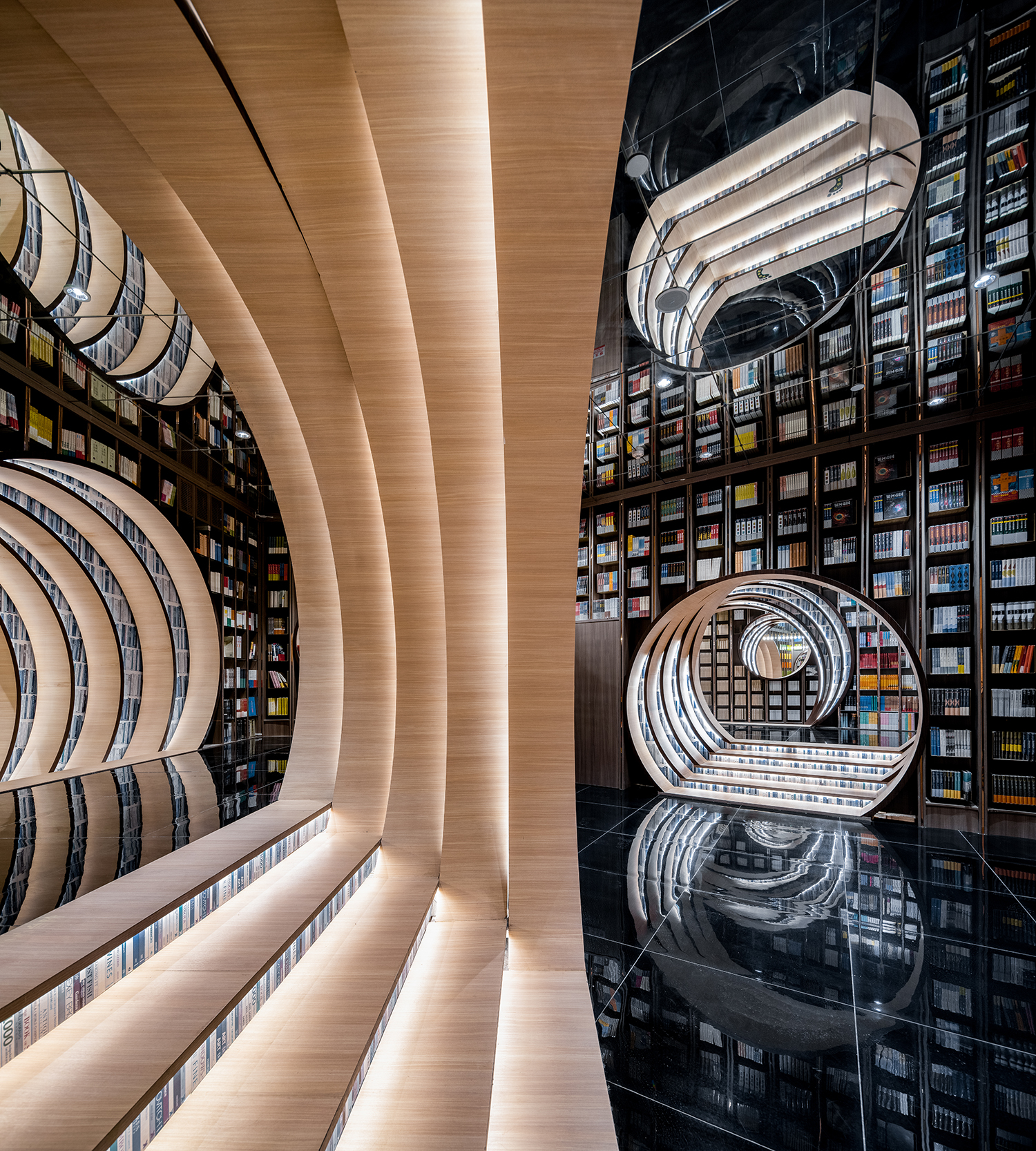 In the conceptual area, the designer creates an elevation difference transformation by using the ladders to make the space pattern fluctuate and even the wandering walk will present a rhyme. Using perspective relations to create a visual illusion experience, the arches are nested and intersecting, and all of the beautiful sceneries are within eyesight. The charm of the changing scenery in the classical garden not only appears everywhere, but the refraction of the mirror surface also gives this phantom realm a kind of surreal sensory impact.

Evolved from the form of classic ‘Moon Gate’, various circular holes were spread in the space. Apart from acting as a traffic corridor connects spaces, some of them even function as frames displaying exquisite view in them. With the traditional decorative usage of classic ‘Moon Gate’ been abandoned and the application range expanded, it has become a symbol, a link and thus presented more possibilities in space. Making use of the arched shape, the designer has also built several resting couches, so that the symbolized arched door has the dual meaning of function and aesthetics. 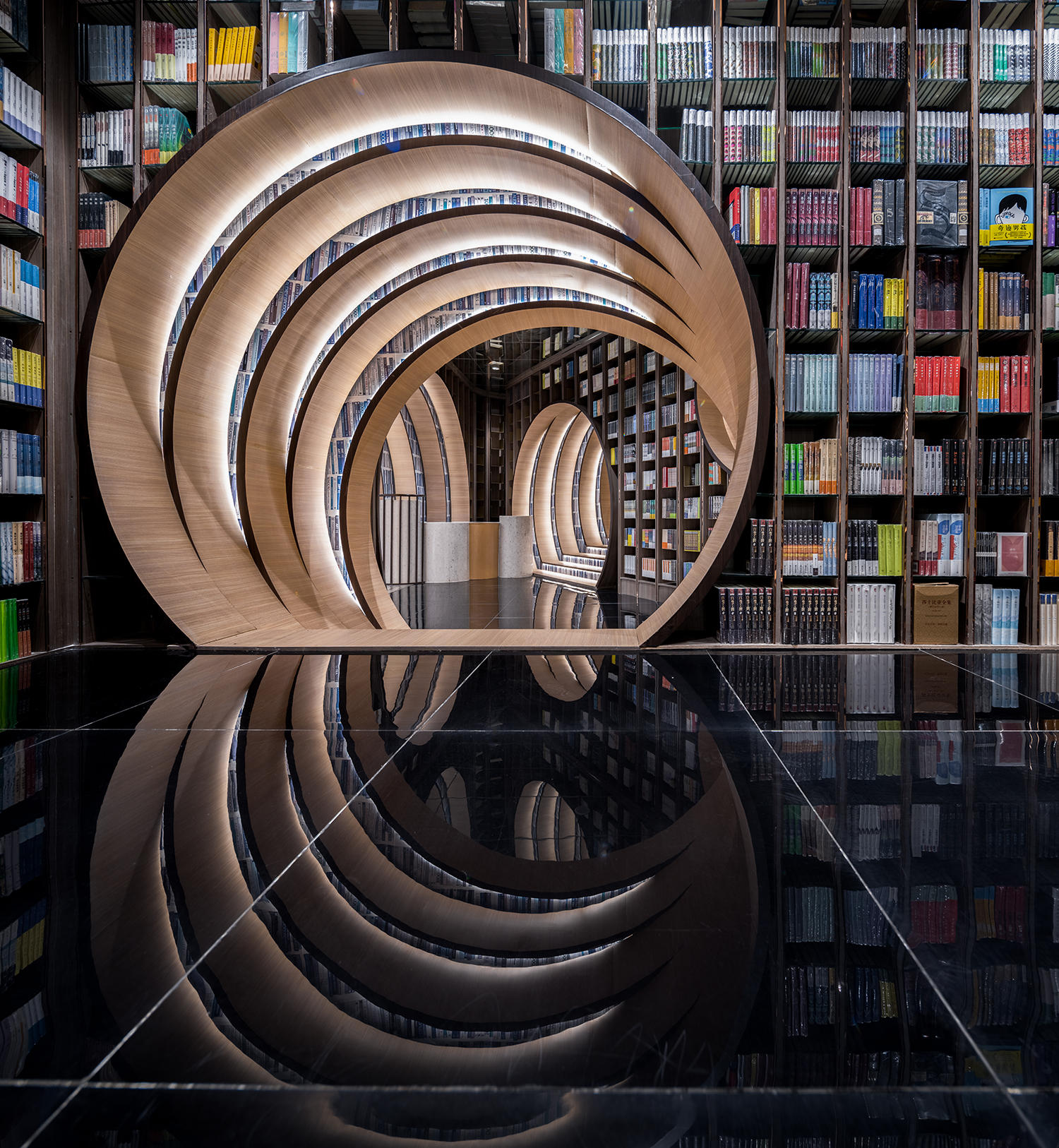 The cashier constructed by terrazzo material are the same with those in the cafe. The arrangement of tables and chairs in the cafe is distributed casually but in great order, simulating a gathering of ancient people in a famous Chinese painting called ‘Qu Shui Liu Shang’. The shared tables and chairs enable the crowd to sit next to different social needs and constitute the elegant and interesting scene together. 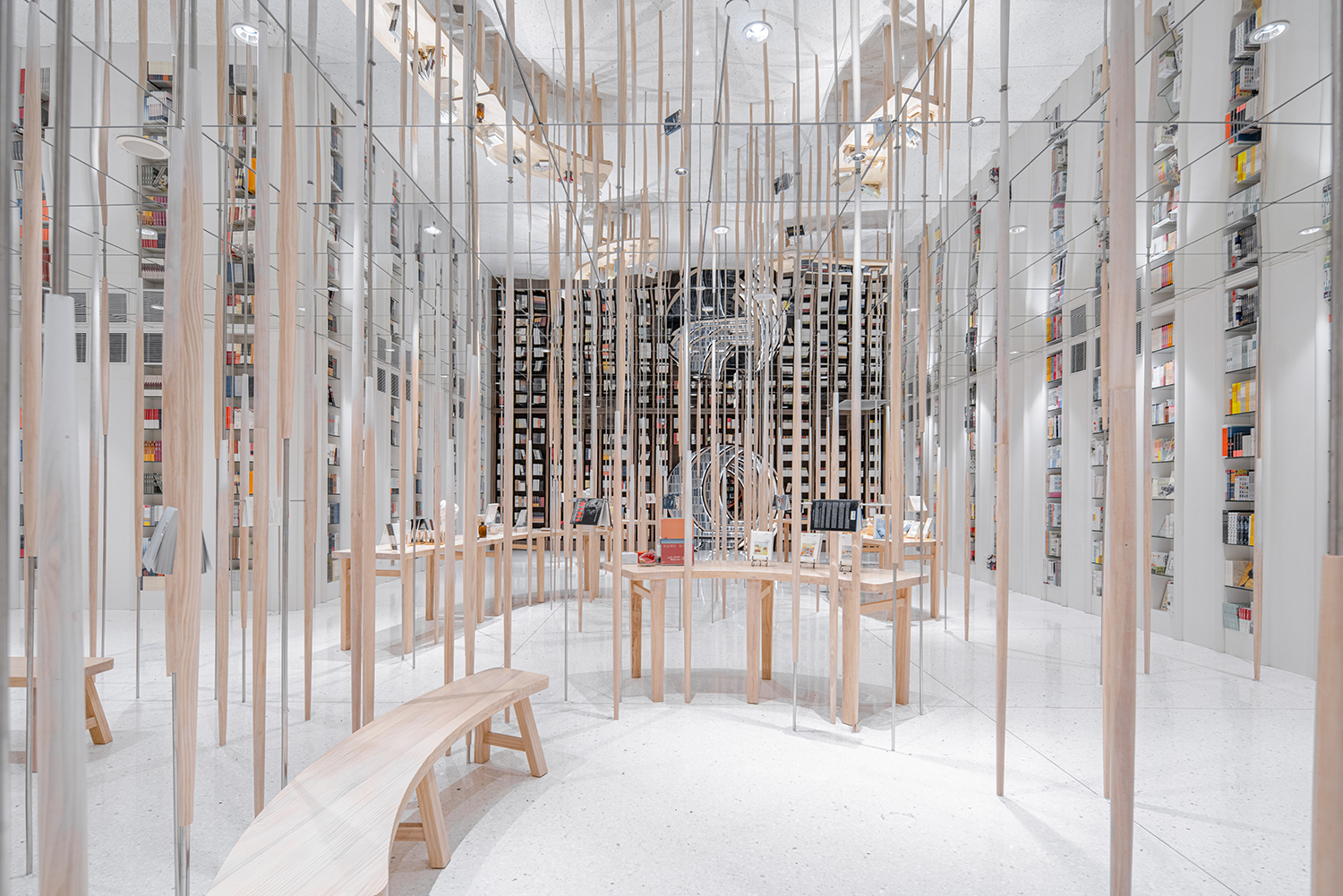 Behind the door where you find a bamboo forest is the cultural and creative area. The extremely simplified wood branches, through the skillful arrangement, have completed the turn from microscopic image to macroscopic view. A line has been drawn between two wooden branches, and a special poster or book display booth is formed, which fully satisfies the owners’ diversified operation needs. The straight-line action path of readers is decomposed, and the ease of walking in bamboo groves is a delicate mood experience that designers present to readers. 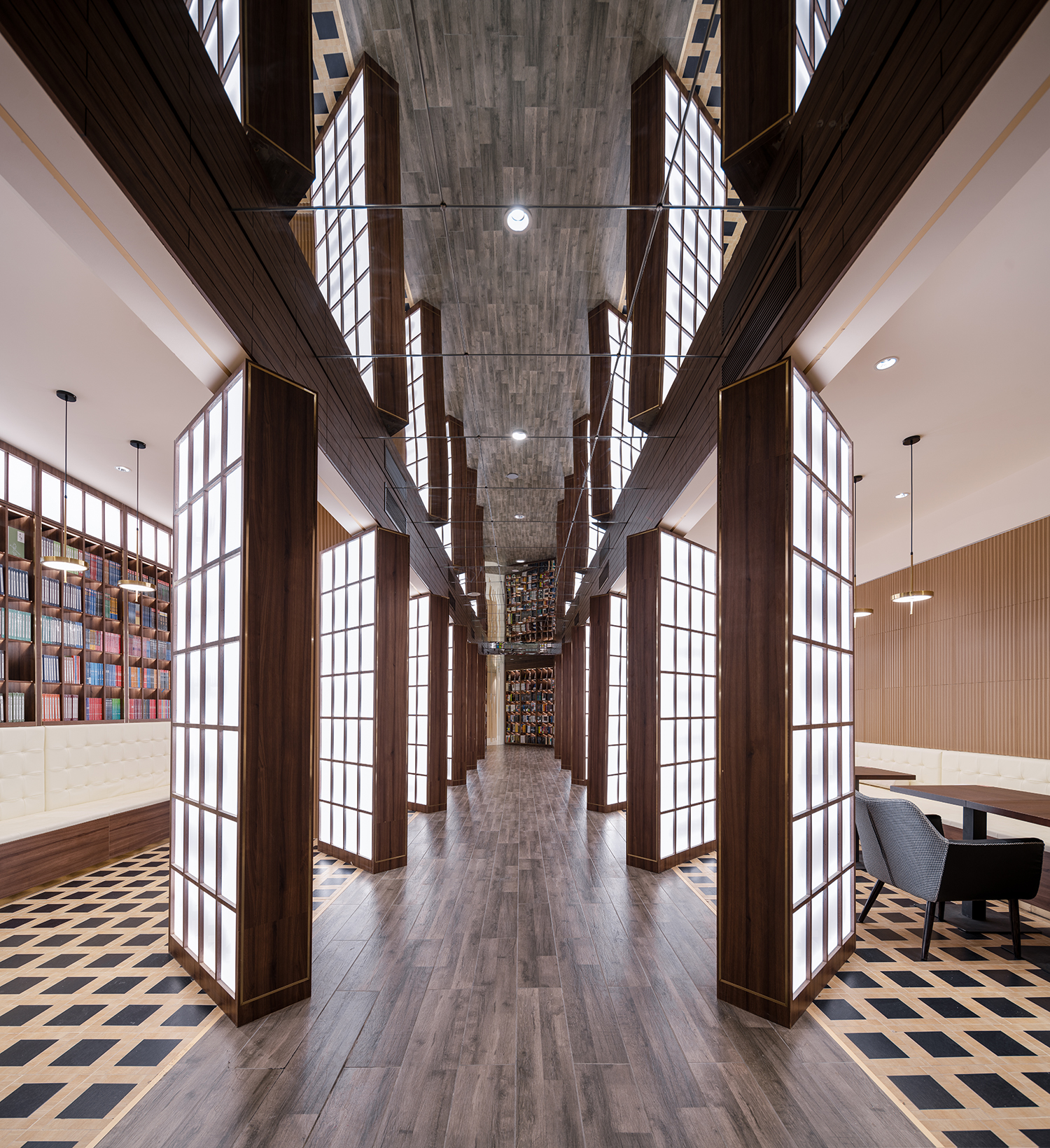 Through the bamboo grove and walking into the study hall, the designer created a ceremonial and secluded elegant atmosphere by using the central symmetrical layout of traditional architecture. The bookshelf is inspired from screen art, on the back of which is the lamp box acting as a light source. The warm glow from the paper pane fell on the face of the reader, creating an antique flavour. 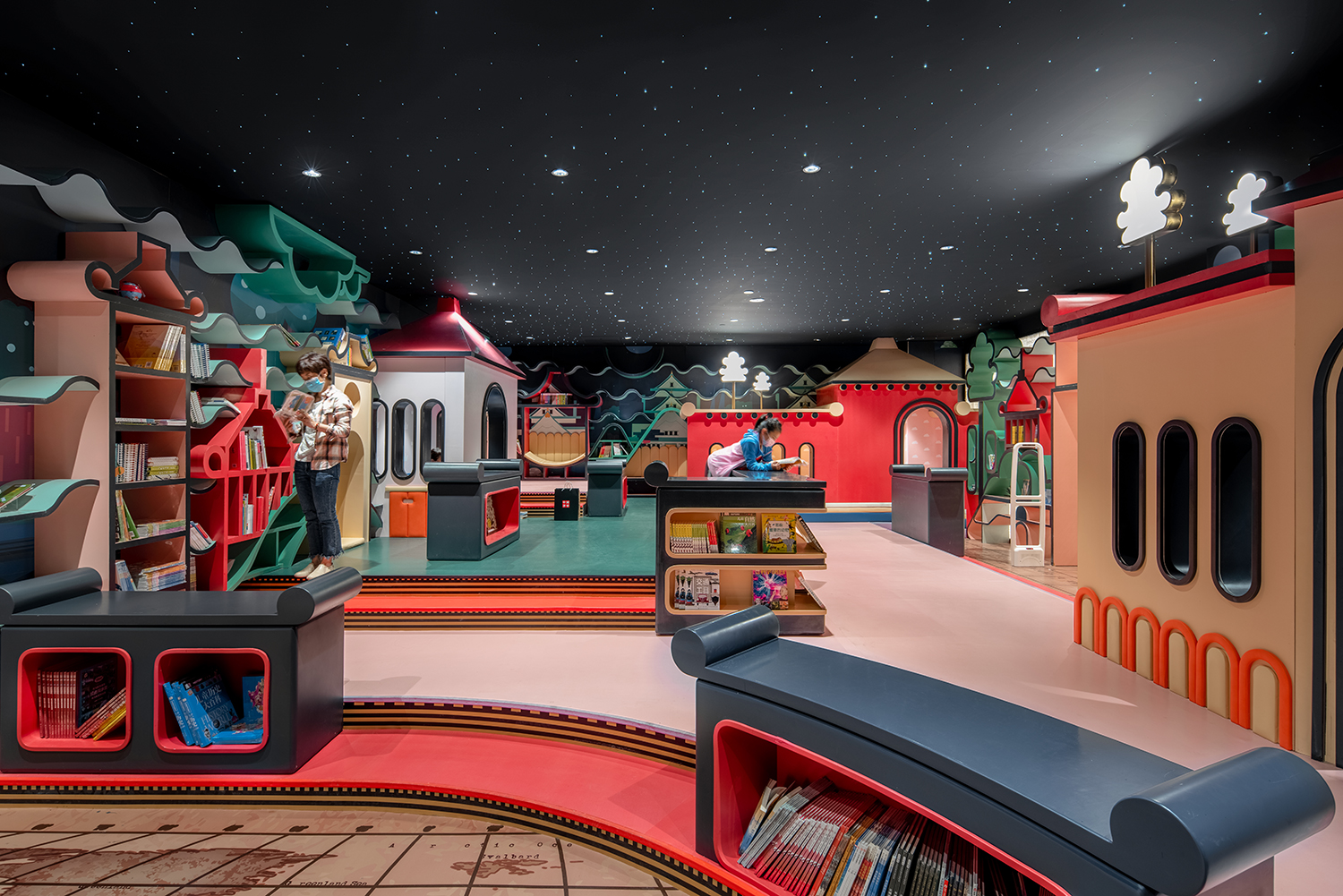 The children’s library is a unique world built for kids. The designer used simplified lines and figures to create a cartoon city. Wavy streamlines is for river and sphere for cornices. The strokes imitating those by children have painted a vivid picture of ancient buildings.

Located in the fashion community, Zhongshuge Beijing Lafayette store is a dialogue window between classical art and contemporary fashion. Between the new and the old, the psychological impact of space rotation brings the readers who enter the bookstore into the cave of the Peach Garden and to experience a terrific journey like a dream.