MVRDV has completed construction of Concordia Design, a mixed-use building containing co-working spaces, an event venue, a food hall, a café, and a rooftop terrace on Słodowa Island in Wrocław, Poland. The project is a renovation and extension of a 19th-century listed building, retaining the façade of the existing building and adding a contemporary extension to create a focal point for the neighboring park and a destination that will enhance the experience of the island for visitors. 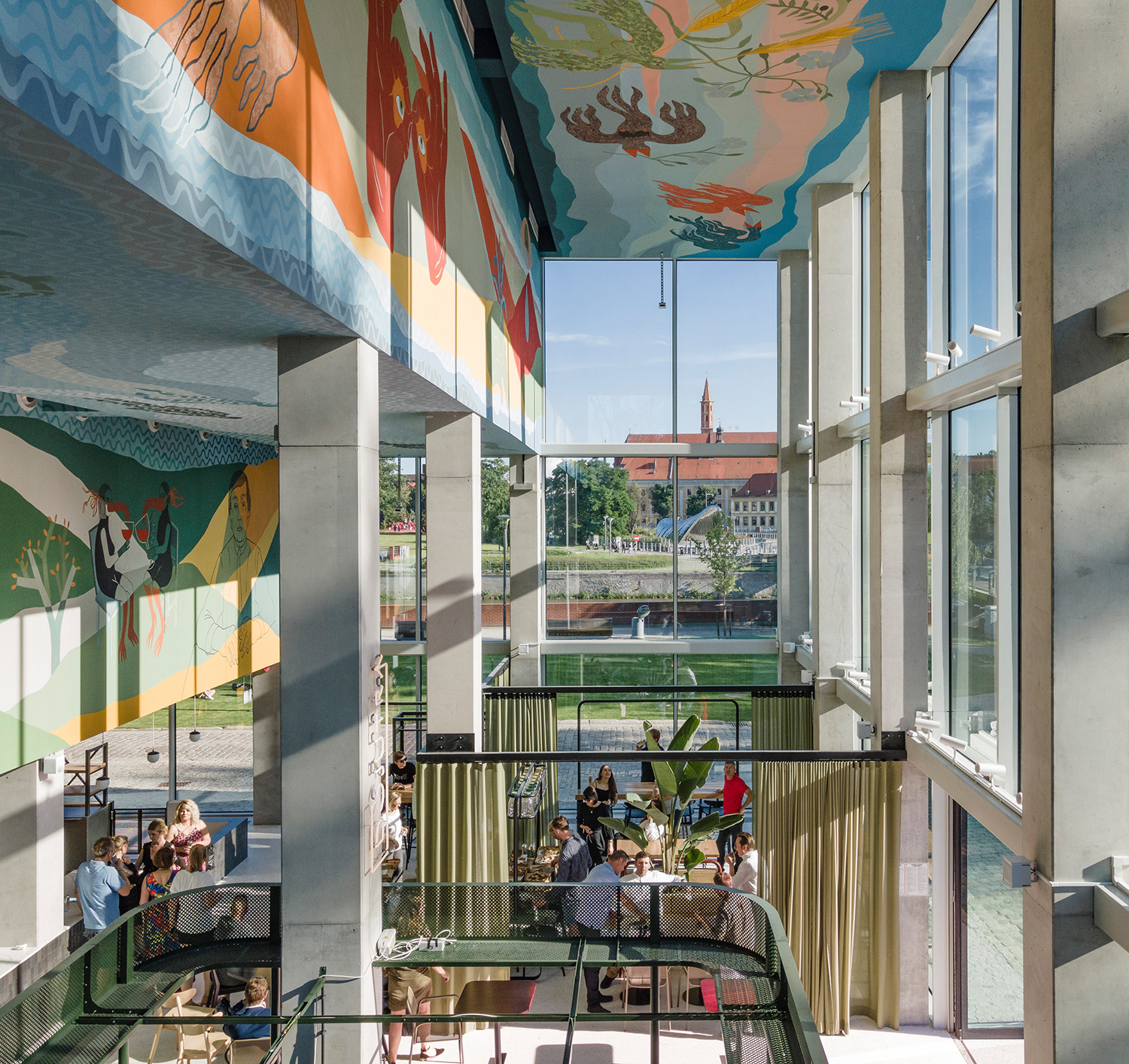 Słodowa Island has a complex and important history – the existing building is the only structure that remained on the island following the Siege of Breslau in World War 2 – but the island has also become a meeting place for the city’s dynamic youth and its forward-thinking creative culture. With Concordia Design Wrocław, the aim was to respect both these features of the location, resulting in a building with no ‘backside’ that opens up to visitors in both directions. 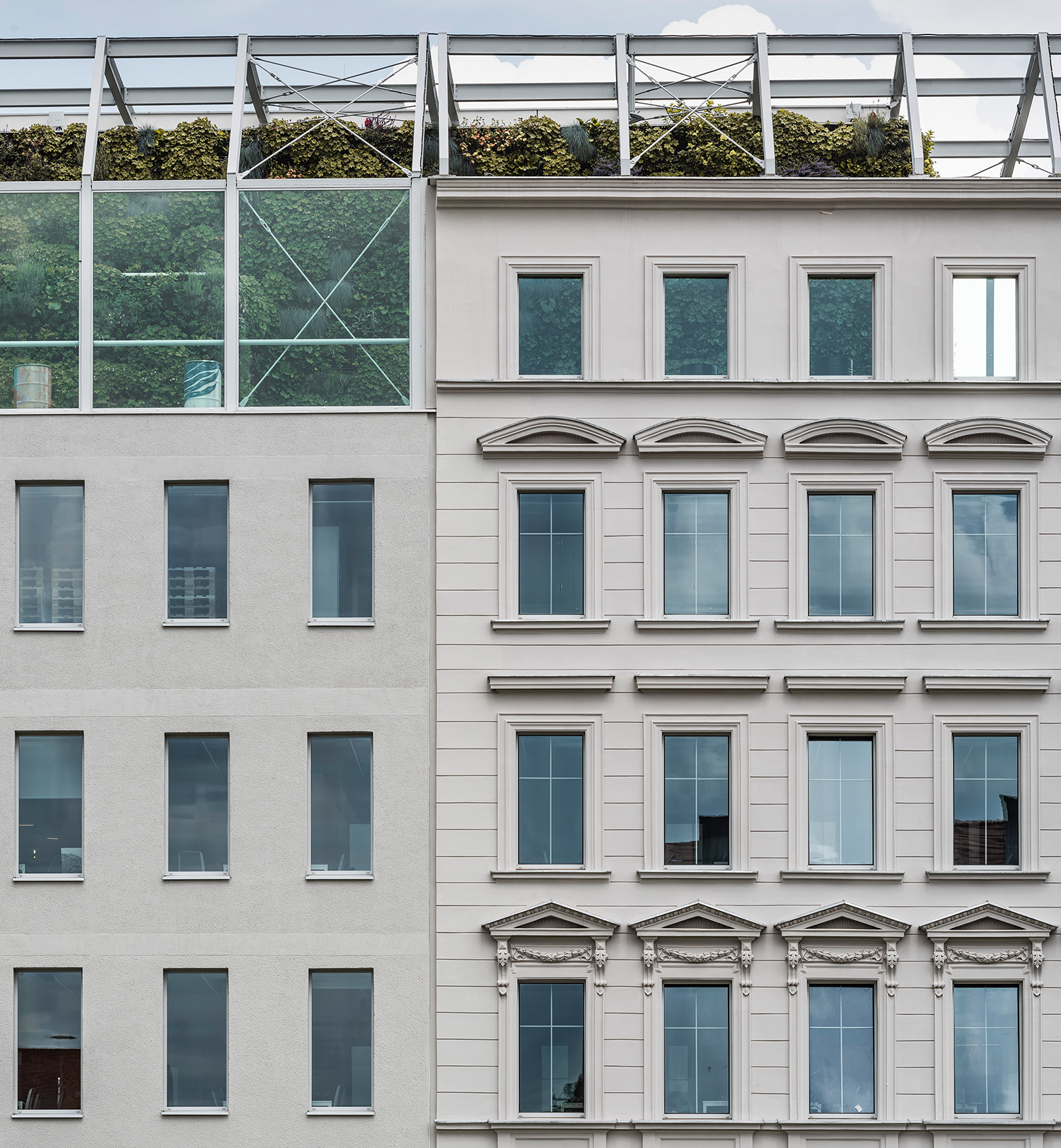 The design is thus influenced by depictions of Janus, the Roman deity of transitions, time, and duality. The form and interior layout of the building displays a certain symmetry, with triple-height stepped voids at the entrances on each end of the building. However, within this symmetry there are clear distinctions between the “formal” end of the building, featuring the retained façade of the historic building, and the new addition. On the formal end, the entrance space hosts the café and exposed brick walls from the original building. 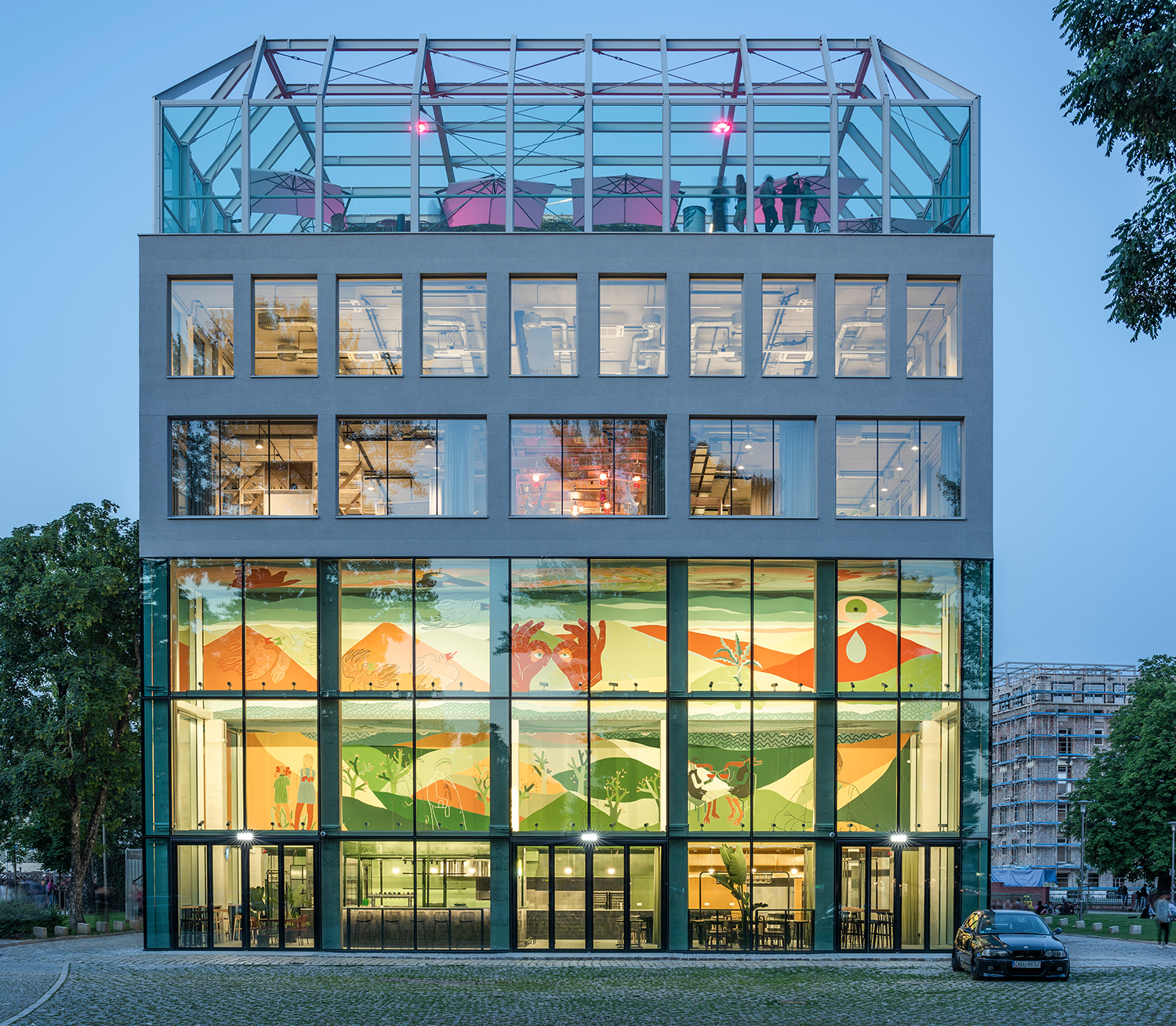 The informal end of the building faces the park and hosts the food hall. Reflecting the energy given to the park by the city’s young people, this end of the building is transparent, modern, and inviting, with a three-storey glass wall that opens up to the park revealing a large mural by Polish artist Alicja Biała. The main theme of her work is slow pace, respect for everyday life, deceleration, and contact with nature. Realistic characters are depicted side by side with imaginary creatures. 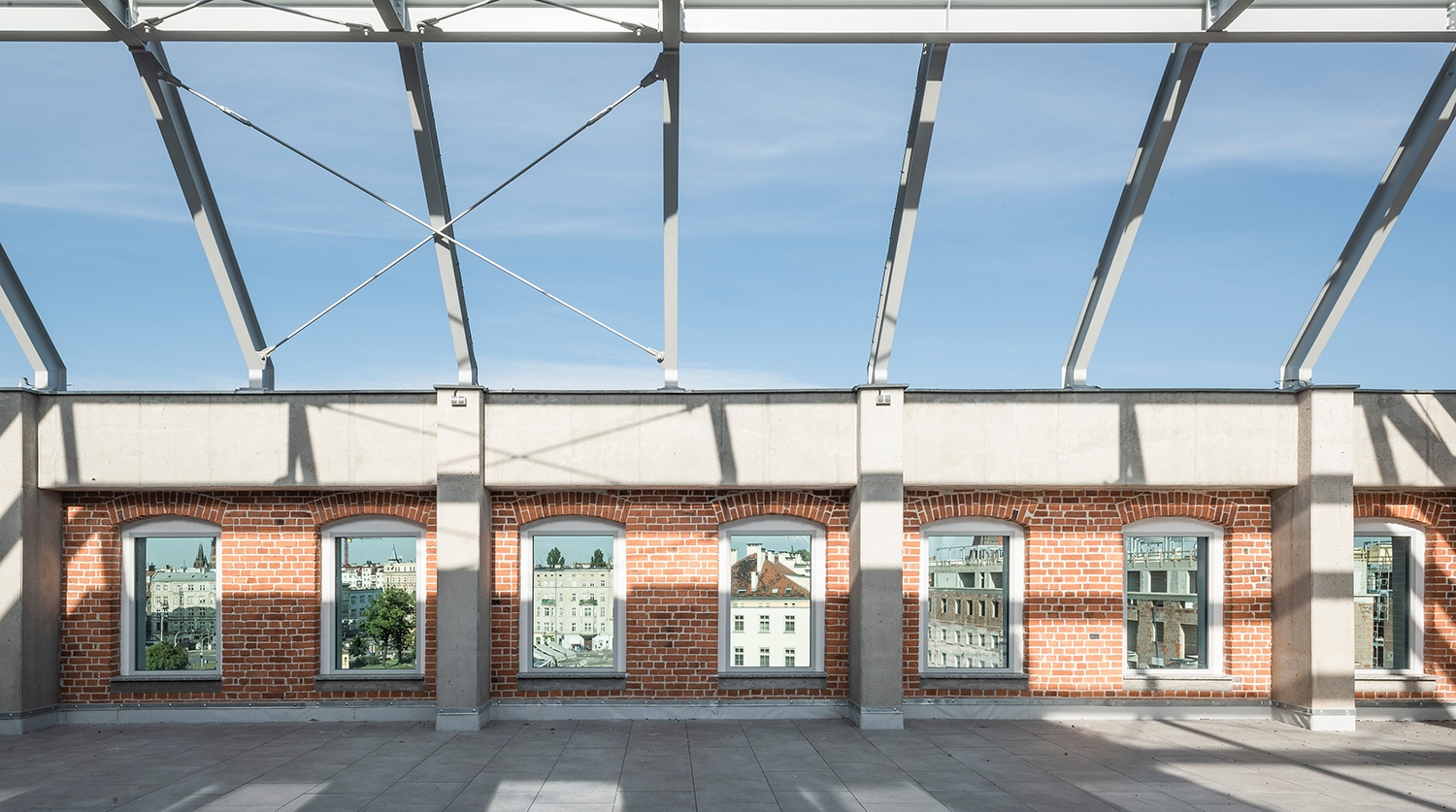 “One of the most interesting aspects of Wrocław is the city’s busy public realm and use of the riversides. As the heart of this outdoor activity, Słodowa Island is a unique and fascinating place,” says MVRDV founding partner Nathalie de Vries. “Concordia Design’s Wrocław combination of a historic structure, a vibrant mixture of creative and exciting businesses, and new attractions working in harmony with the island’s public space will cement Słodowa Island’s reputation as the place to be in Wrocław.”

The design of the extension is respectful to the existing building, continuing its roofline. The window openings on the extension match those on the historic façade, becoming wider and more transparent closer to the informal end of the building. Besides the café and food hall in the entrance spaces, the rest of the 4500m2 building hosts co-working office spaces, while the uppermost floor features an open-air terrace, protected by glass walls on all sides, providing views onto the city. 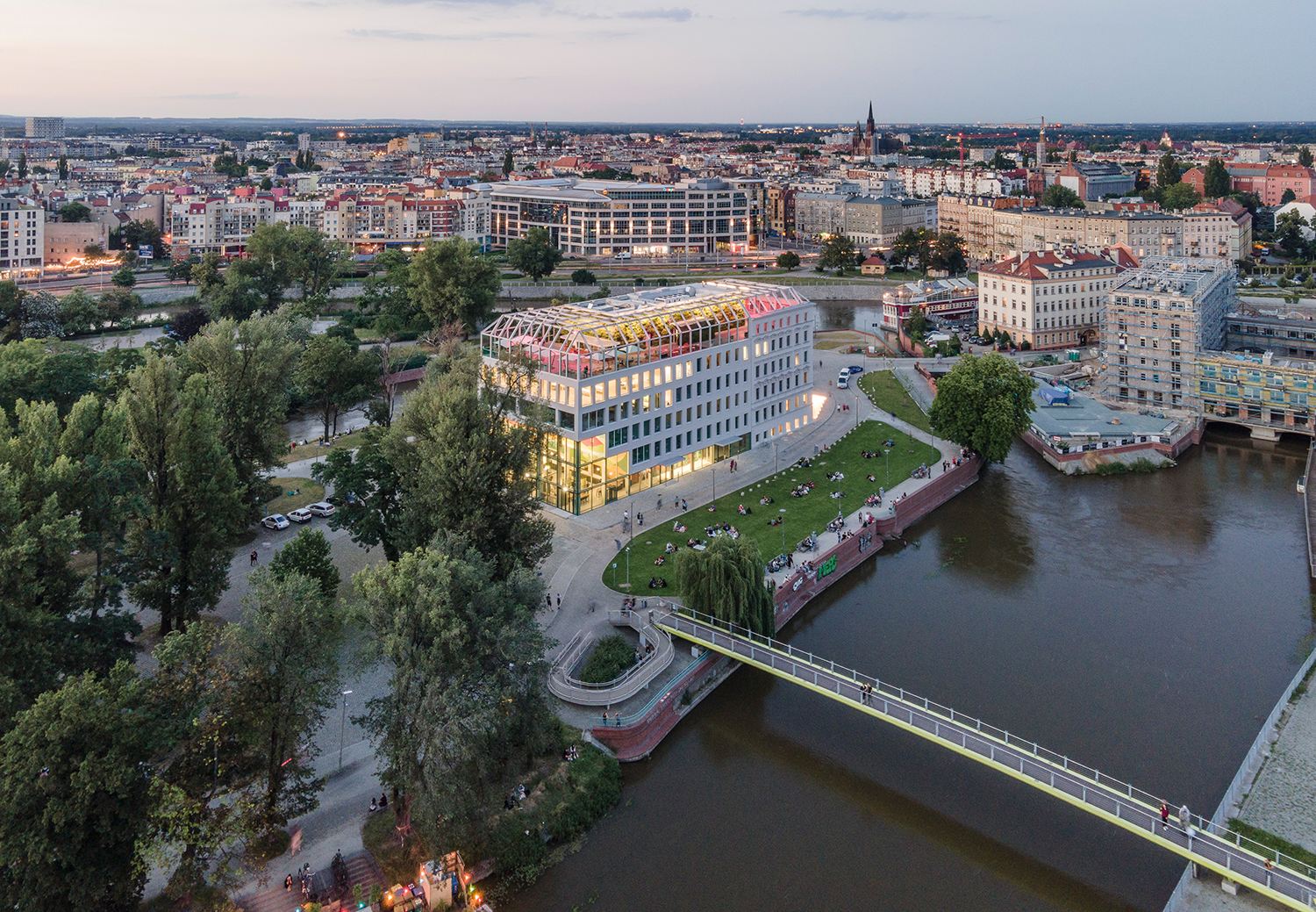 “Together with MVRDV, we wanted to create a democratic space that would integrate different groups of residents,” says Ewa Voelkel-Krokowicz, CEO Concordia Design. “We tried to understand the unique character of the place, its history and potential. Both creative communities and young businesses will find their place here – and on the other hand, everyone who wants to spend their free time in a well-designed space, looking for interesting events. From the very beginning, our goal was to keep Słodowa Island open. Concordia has a chance to combine this potential with new needs and attract new users.”